Although she was born in Texas and lived in Nebraska into her twenties, photographer and printmaker Delilah Montoya has deep roots in northern New Mexico through her mother's family. Raised by her mother, Montoya observes that women have empowered her family for five generations.

Montoya studied photography and printmaking at the University of New Mexico, where she received her bachelor's degree, master's degree, and master of fine arts. She works in a variety of two-dimensional photographic and printing processes as well as creating larger installations. The artist describes her approach as postmodernist and uses documentary strategies to interpret her own distinct vision.

Politically, Montoya is committed to exploring issues of identity in terms of a Chicano cultural context:"In my own evolving ideology I question my identity as a Chicana in occupied America, and articulate the experience of the minority woman. I work to understand the depth of my spiritual, political, emotional and cultural icons, realizing that in exploring the topography of my conceptual homeland, Aztlan, I am searching for the configuration of my own vision. " (Montoya n.d.) Montoya is committed to the expression of Chicana experience and history, but she does not consider herself as a feminist. Indeed, Montoya rejects identification as a United States-style feminist because she believes that "Feminists don't give us solidarity. As a Chicana my issues are multifaceted, not just gender, but class, race. "

The border, for Montoya, is a politically imposed construct, a part of a United States colonialist enterprise that was forced upon the Chicano community. It is the environment in which Chicano life and history unfolds. Montoya's work explores contemporary and historical issues, sometimes win a humorous twist. Her artist's book for the 1992 Chicano Codices exhibition organized by the Mexican Museum in San Francisco, Codex Delilah: a Journey From Mechica to Chicana (including text by poet Cecilio Garcia-Camarillo), traces the imaginary journey of Six Deer, a character who embodies the contact between indigenous and Spanish culture in her trip "pal norte" towards Aztlan, the "spiritual homeland of her ancestors." As she journeys to the north, the character also journeys forward in time, meeting important Chicanas from the past, including La Llorona, La Conquistador, and activist Velia Silva. This effort to reimagine a forgotten and ignored history integrates several elements to affirm the importance of both historical and contemporary mestizaje to Chicana survival.

Another project, "El Sagrado Corazon/The Sacred Heart," involved the Albuquerque Chicano community in an exploration of the syncretism, or mixing, of Catholicism and Aztec philosophy. These collotype portraits depict members of the community as well as cultural personages, such as "La Genizara" (a Hispanicized Native American) and "La Loca y Sweetie," barrio "home girls." 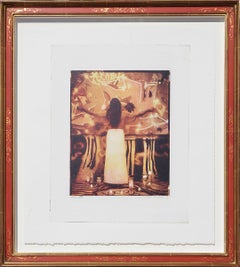 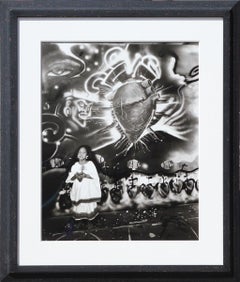 Without innocence how can there be wisdom, from Corazon Sagrado series
By Delilah Montoya
Located in Dallas, TX
Edition 1/1 Signed, titled, dated and numbered in pencil on print margin. Collotype print
Category

Delilah Montoya
Without innocence how can there be wisdom, from Corazon Sagrado series, 1993 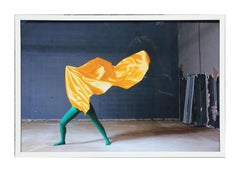 Photograph of Man's Back While Sitting
By Rodney Susholtz
Located in Houston, TX
Category

Rodney Susholtz
Photograph of Man's Back While Sitting, 1972

Early Black and White Photograph of a Large Cat Lounging in a Zoo Enclosure
Located in Houston, TX
Category

Early Black and White Photograph of a Large Cat Lounging in a Zoo Enclosure, 20th Century