Gustave Jean Jacquet was a renowned portraitist and genre painter, who worked in oil and pastels in Paris in the latter half of the 19th century. Jacquet was born in Paris in 1846 and began his artistic training under the guidance of the celebrated academic painter William Adolphe Bouguereau at the École des Beaux-Arts. Jacquet quickly assimilated all that he was taught, debuting at the Salon of the Société des Artistes Français at 19, with two genre paintings titled — La modestie (Modesty) and La tristesse (Sadness). After his debut, Jacquet’s style changed drastically and was no longer reflective of Bouguereau’s manner. Jacquet paid great attention to minute details in the fashions of the sixteenth, seventeenth, and eighteenth centuries. At the 1867 Salon, Jacquet presented his painting entitled — The Call to Arms, where it attracted much public attention. The following year at the Salon, he earned a third-place medal with Sortie d’Armée au XVI Siècle and sold Sortie de Lansquenets to the state. In 1878, he exhibited Joan of Arc Praying for France at the Salon; and the same year, at the Exposition Universelle, he submitted a revised and solely executed allegory on La Reverie which earned him heightened success and a widening reputation. In 1875, at 29, Jacquet was awarded a premier medal. The Légion d’honneur (Legion of Honor) decorated him four years later. The artist’s style continuously advanced as he became aware of the techniques and philosophies of colleagues around the continent. Jacquet had traveled to Italy, Germany and England (where he exhibited at the Grosvenor Gallery in London) collecting ideas and souvenirs. Jacquet brought back his atelier tapestries, armor, fabrics and draperies from other countries that he used as props for his paintings. Regarding the artist, the art critic Louis-Edmond Duranty declared: “Behold an artist, unknown today, which will be celebrated tomorrow.” The grace and charm with which Jacquet depicted his subjects appealed to the connoisseurs of fine art. Jacquet was also one of the most graceful painters of the female nude.

Portrait of a French 19th century lady in a gilt and ormolu hand made frame
By Gustave Jean Jacquet
Located in Southport, CT
Gustave Jaquet Jacquet was born on 25th May 1846 in Paris. He was a pupil of Bouguereau and for his debut at the Paris Salon in 1865, he exhibited 'The Reverie' which was very much i...
Category 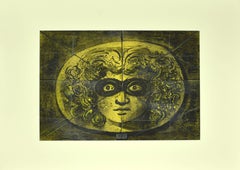 Portrait of Couple - Original Pencil and Watercolor by Mino Maccari - 1950
By Mino Maccari
Located in Roma, IT
Category

Portrait - Original Pencil and Watercolor on Paper by Mino Maccari - 1985
By Mino Maccari
Located in Roma, IT
Category

H 8.75 in. W 6.75 in.
Fille au Repos - 19th Century Oil, Portrait of Girl Resting by Gustave Jacquet
By Gustave Jean Jacquet
Located in Marlow, Buckinghamshire
Oil on panel circa 1880. Signed upper left. Framed dimensions are 17 inches high by 13 inches wide. Jacquet was a pupil of Bouguereau. He began exhibiting at the Salon de Paris in 1...
Category

H 13 in. W 8.5 in.
Fille Dans Un Bonnet
By Gustave Jean Jacquet
Located in Wiscasett, ME
Oil on board. Signed lower left, exhibition labels on reverse. Gustave Jean Jacquet was born in 25th May 1846 and died in 1909 in Paris. He was a painter and watercolorist. Most of ...
Category