Hugh Campbell was born on December 4th, 1905 in Atchison, Kansas. He moved to the Camden, New Jersey area when he was 10 years old. Hugh Campbell left a nine-to-five job in the 1930s to pursue an artist's life. He jumped into his new life with nothing but determination and a feeling that he could paint. He had no formal training. Training himself was his priority, which he did by drawing over 1,000,000 free-hand circles and then over 130,000 action sketches of people on the streets. But it was the fields around his boyhood fishing spots in Mount Holly, where he felt the most at home. Campbell commuted from Camden to Mount Holly regularly as he discovered that those fields and streets were the subject matter that he wanted to paint. He had no money and no place to stay so he would pitch a tent in a field and stay overnight. At one point, the owner of Hacks Canoe Retreat told him that he didn't have to pitch a tent, he could come as often as he liked and stay as long as he liked in an unheated canoe barn at no charge. The owner thought Campbell was going to stay a week or two, but he ended up staying for seven years. In the 1940s, Campbell bought an old tar paper bicycle repair shop building for $150 and moved in onto Kates Tract, the woods on the banks of the Rancocas. He had a quiet, austere lifestyle. Each night, winter and summer, he would go to Mill Dam Park and meditate. Each day, carrying his heavy painting gear, he would roam the fields, valleys and woods up and down the Rancocas Creek, and look for inspiration. Then, after painting, he would record in his voluminous diaries the goings-on all around him. Every Sunday, Campbell would display his paintings along the concrete wall on High Street for even then unheard of prices of $20 or $30. He earned, on average, an income of about $2.00 to $5.00 a week from the sale of his paintings. As he refined his technique, he became a regular at the "Rittenhouse Square Annual Clothesline Exhibition" in Philadelphia. 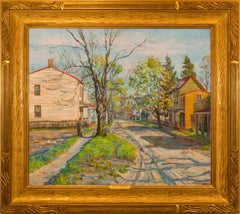 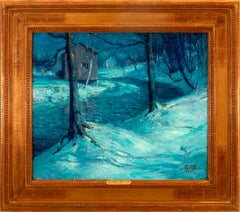 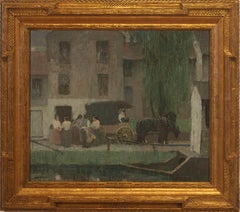 Robert Spencer
"Peddler's Cart on the Canal, New Hope", circa 1912

"The Susquehanna"
By Daniel Garber
Located in Lambertville, NJ
Category

"The Gossips"
By Richard Wedderspoon
Located in Lambertville, NJ
Category

"Edge of the Woods"
By Henry Bayley Snell
Located in Lambertville, NJ
Category

"Under the Willow"
By Joseph Barrett
Located in Lambertville, NJ
Category

Joseph Barrett
"Under the Willow"