Huguette Arthur-Bertrand was the leading female member of the influential Abstraction-Lyrique group, which included artists such as Camille Bryen, André Lanskoy, Hans Hartung, Zao Wou ki, Chu Teh-Chun and Pierre Soulages and was the European equivalent of American Abstract Expressionism. Arriving in Paris after the Liberation, Arthur-Bertrand quickly became immersed into the avant-garde circles of Saint-Germain-des-Prés and began exhibiting at the Salon des Moins des Trente Ans. In 1947, she was awarded the Lauréat du Concours which enabled her to spend several months in Prague. By 1949, her paintings had reached pure abstraction which she exhibited for the first time at the Salon de Mai. At this time, she also became involved with an elite group of avant-garde artists known as Les Mains Éblouies and exhibited with them at Galerie Maeght, including Deyrolle, Dewasne, Poliakoff and Magnelli. Arthur-Bertrand held her first solo show at Galerie Niepce in 1951, which was curated by Julien Alvard and in 1953 joined Galerie Arnaud, where she exhibited in a series of influential exhibitions under the collective title “Divergences." She soon established a reputation for her powerfully energized gestural paintings. Her emphatically expressive style emerged directly from the automatic writings of the Surrealists such as André Breton and strives to allow expression of the subconscious in an attempt to manifest a pure reality devoid of references to the material world in which we perceive our existence. But despite the apparent rapid execution, the artist produced relatively few works during her life, aspiring to complete perfection she tended to spend two to three years on a painting before she was satisfied with it and this only heightens the aura that surrounds her work. In 1955, Arthur-Bertrand was awarded the prestigious Prix Fénéon and began to attract international attention. That year she held a solo show in Brussels, and in 1956, had a major show in New York at Gallery Meltzer. Concurrently in Paris, she participated in the groundbreaking show Aventure de l’Art Abstrait organized by Michael Ragon and Le Corbusier’s Festival Avant-garde. In 1966, she was awarded the Prix de la Biennale de Menton in recognition of her distinguished achievements. Arthur-Bertrand is represented in several major museums of modern art including Musée Nationale d’Art Moderne, Paris; Musée d’Art Moderne de la Ville de Paris and Musée d’Art et Industrie, Saint-Étienne. 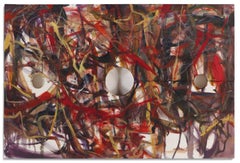