John O. Thomson currently lives in Santa Cruz, California, and Mexico, and works with several of California's designers and galleries. Thomson has also studied at the California College of Arts and Crafts, where he was awarded the bachelor of arts degree, master of arts degree and California teaching credentials at Chico State University. He received his master of fine arts degree in painting from the University of Guanajuato in Mexico and went on to teach at many institutes. Thomson has exhibited in many galleries and shows throughout the world, including the Galleria Design Center in San Francisco, the Institute Allende Masters Show, Art Center of Saratoga, the Triton Museum of Santa Clara, the Northern California Art Exhibition and the Castle Gallery and Cooper House Gallery of Santa Cruz, California.

Thomson has also exhibited his artwork in many hotels, some of which include the Saint Francis Hotel in San Francisco, the Regency Hotel, and the Sheraton Palace Hotel. Thomson has also been a member of the Society of Western Artists, the El Dorado Artists Association and the San Miguel Artists Association. His work is represented in numerous countries, such as Australia, Belgium, Brazil, Bora Bora, Canada, England, France, Denmark, Japan, Holland, Guatemala, Mexico, New Zealand, Switzerland and Venezuela. 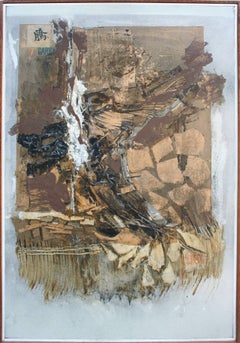 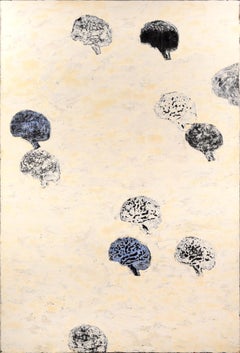 Michael Pauker
Abstracted Vanitas with Goldfish and Skull, circa 2010

H 68 in. W 55 in. D 5 in.
Brown Pudden
By John O. Thomson
Located in Soquel, CA
Oil, paper, ink and collage all come together in this painting entitled "Brown Pudden" by John O. Thomson (American, b.1941). Bold areas of metallic and non-metallic gold tones are p...
Category