Manon Catherine Cleary was an American artist born in St. Louis, on November 14, 1942. Her father was a doctor and her identical twin sister, Shirley Cleary-Cooper, was an artist in Helena, Montana. She was a 1964 graduate of Washington University in her home town and for the rest of her life, was proud of having been a member of the Pi Phi sorority. After teaching at a junior high school near St. Louis, she studied in Italy and Spain and received a master of fine arts degree from Temple University in Philadelphia in 1968. Some of Cleary’s works are in the collections of museums, including the Corcoran Gallery of Art, National Museum of Women in the Arts, the Brooklyn Museum and Chicago Art Institute. Cleary had a remarkable ability to draw and paint with photographic fidelity, but she was also known as a charismatic teacher at the University of the District of Columbia and as a free spirit whose exuberant life may have been her most enduring work of art. After being given a rat as a pet in the 1970s, she made rats a recurring subject of her art, often in large-scale paintings, with each hair shown in luminous detail. Once, when an art gallery replaced one of her self-portraits with a painting of a rat, the label Self-Portrait was left on the wall. “All of my work has been about self, even the rats. I do have a rat nose and rat hands”, she told Washingtonian magazine in 2005. Since the 1970s, Cleary had been at the center of a group of artists in Adams Morgan. She exhibited her meticulous artwork throughout the city and around the world, but she also became known for her striking presence, her colorful love life and the rats she kept as pets. After studying in Rome in her youth, she developed what she called an obsession with Caravaggio, an iconoclastic painter who lived from 1573–1610. She often copied paintings at the National Gallery of Art and in her work, blended Renaissance styles with a distinctly modern sensibility. Cleary’s Rape series from the late 1990s grew out of a sexual assault she suffered in 1996 while lecturing in Kazakhstan. Several of the black-and-white works show Cleary screaming, others are spattered with red paint and one contains nails driven into her face. As an artist, Cleary borrowed classical techniques from her deep study of Renaissance masters to create paintings and drawings memorable for their frank realism and sometimes disturbing themes. In addition to her many nude self-portraits, Cleary made erotically charged paintings of flowers. She took inspiration from a painful personal history in a series of works depicting the terror of rape and in later years, of not being able to breathe without mechanical assistance. Critics considered her a leading figurative artist of the photo-realist school, in which painters render their subjects with camera-like precision. Cleary occasionally won awards for photography when adjudicators didn’t realize her works were free-hand creations. “She was widely acknowledged to be among the best, if not the best, of the city’s figurative painters. There is a tension between the cool, clinical detachment of photography and painting’s warm idealization of the form”, Washington Post critic Michael O’Sullivan wrote in 2006. Cleary exhibited her art in galleries and museums from Moscow to Paris to Hickory, but Washington was her home for 42 years. In 1974, she settled in the decrepit Beverly Court apartments on Columbia Road, where a coterie of artists soon grew up around her. She painted her walls purple and her fourth-floor apartment, even with the pet rats, became something of a bohemian salon. “She was a star”, painter Judy Jashinsky told the Washington City Paper in 2004, “She was stunning, beautiful, long, brownish-black hair, real thin, wore little sundresses and sandals. She was just very cool and there was always a crowd around her”. Cleary had a long list of male admirers, including several whose confrontational attempts at performance art led to their arrests. She had a brief marriage in 1981 to a Danish artist known as Tommy, whom she divorced in less than a year. As a kind of graphic homage to her various lovers, Cleary made a series of intimately revealing portraits that were featured years later on the HBO program Real Sex. She met her second husband after a gallery opening in Baltimore. By way of introduction, Kijek, a dancer, stripped naked at a crowded party, walked up to Ms. Cleary and they were married in 2001. Despite her unconventional life, Cleary was more than a mere provocateur. After a day of teaching, she would return to her studio, with its windows painted over to block out sunlight and work late into the night, with a bottle of Dr. Pepper at her side. She took nude photographs of herself from every angle, then painstakingly created lifelike images that seemed alive with the warmth of human flesh. “If she saw talent, she would support it and promote it,” Washington art collector and gallery owner Fernando Batista said in an interview, “She tied together so many groups, older and younger. There are very few people like that”. Even with the pet rats, Cleary’s candle-lit apartment became known as a gathering place for an ever-changing group of Washington artists. “I keep the light levels low all the time, curtains were drawn except in the dining room, where the plants need sun and windows painted over in my studio and I entertain at night when dust doesn’t show”, she told The Post in 1998. Manon Catherine Cleary died on November 26, 2011, in Washington D.C. 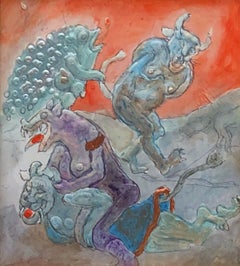