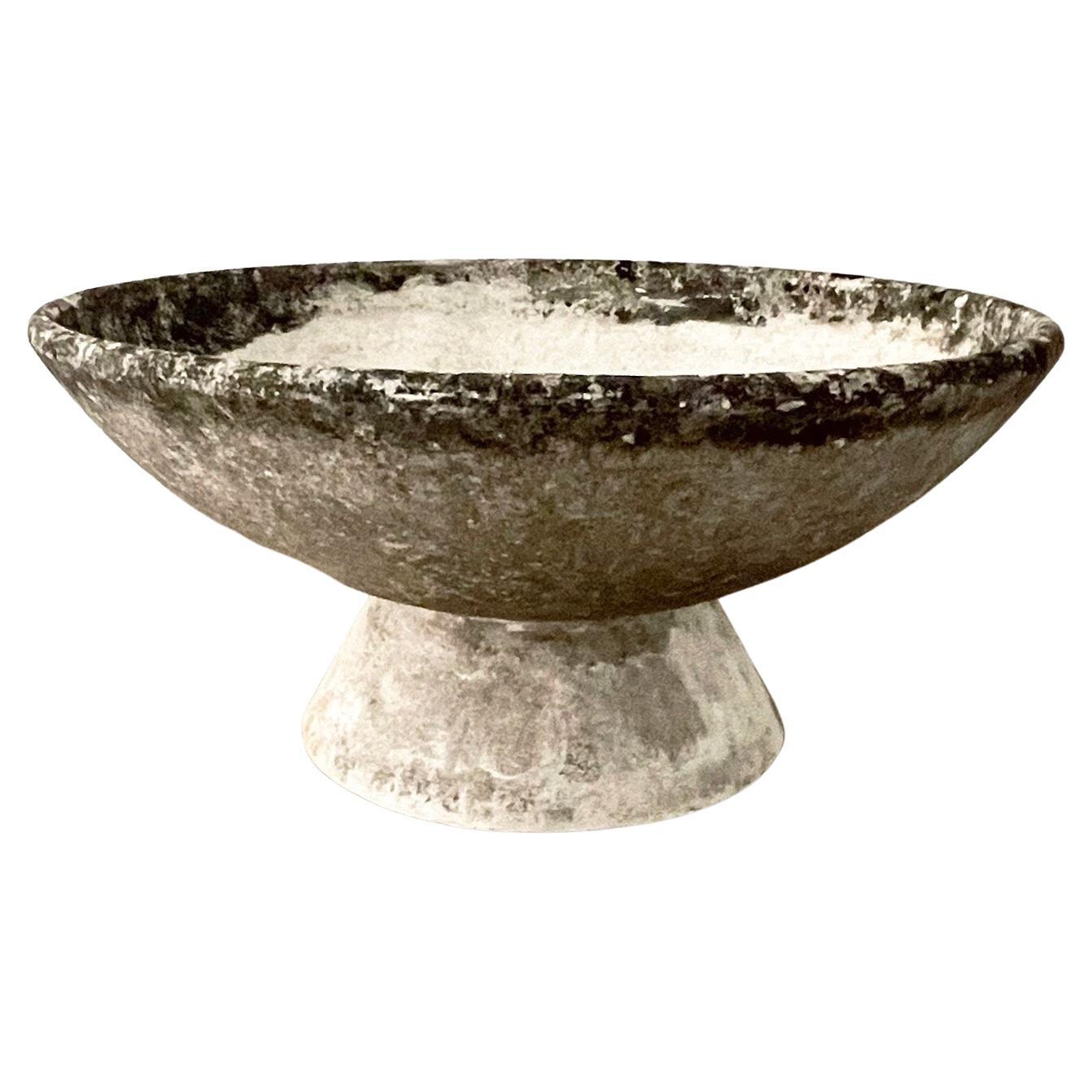 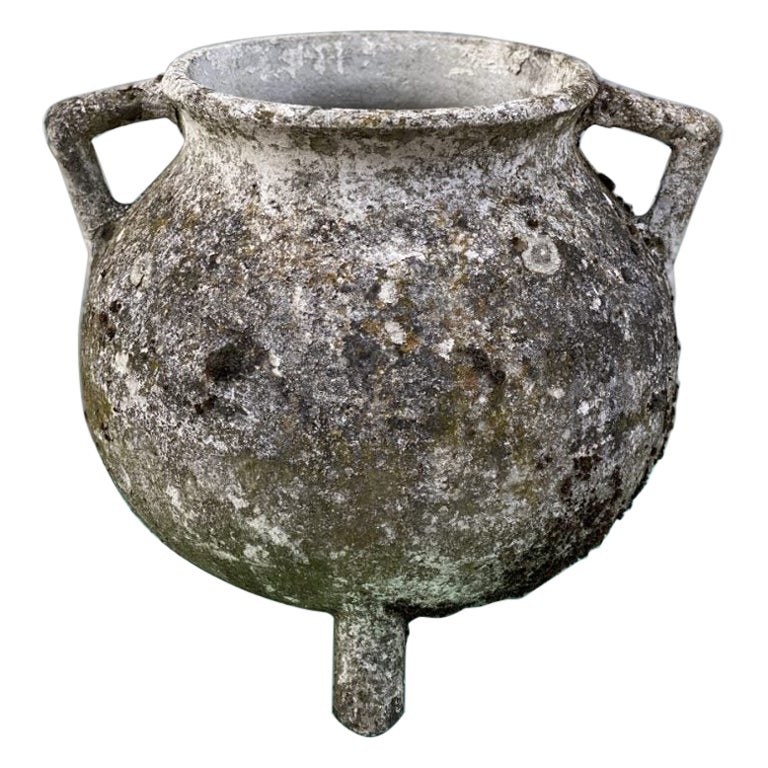 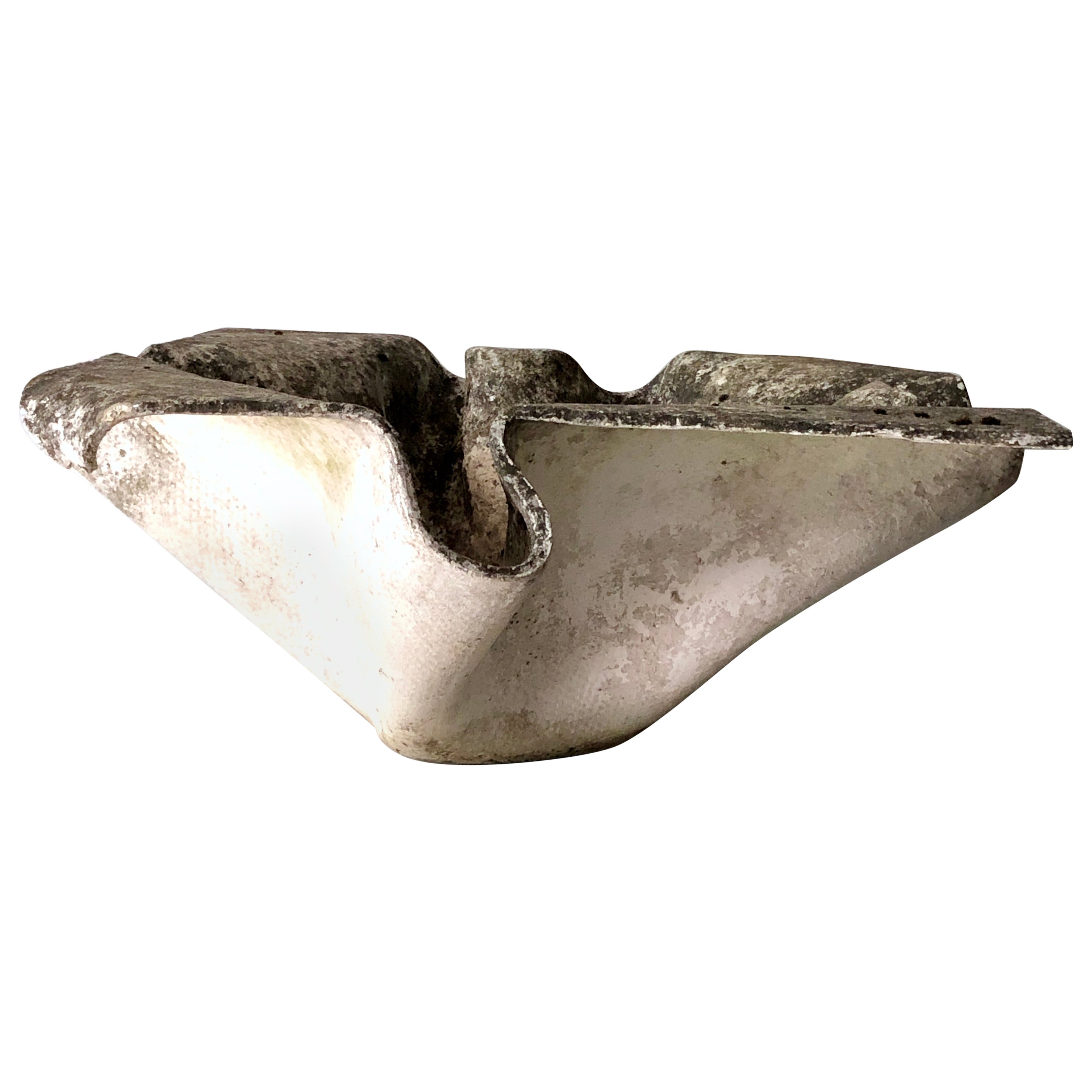 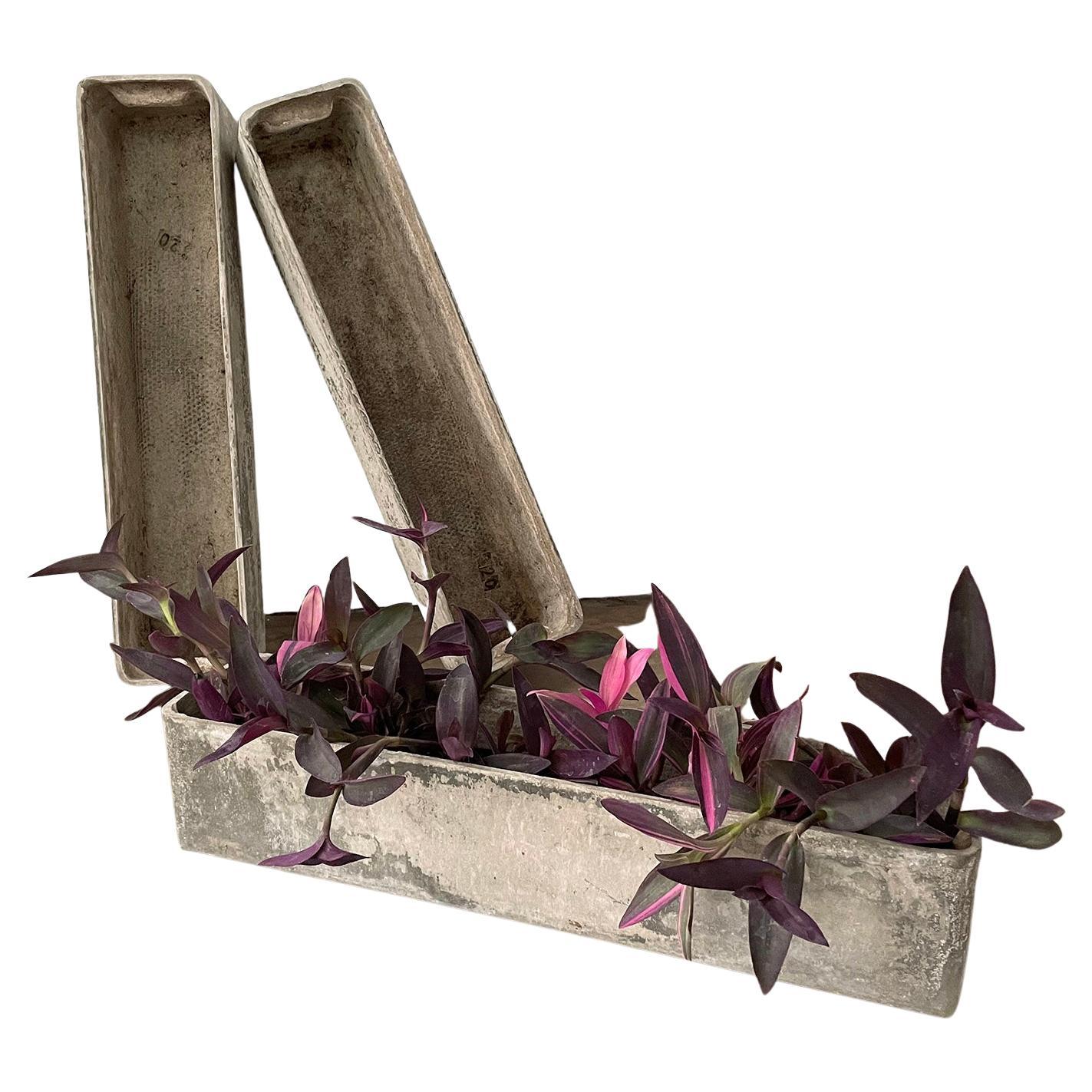 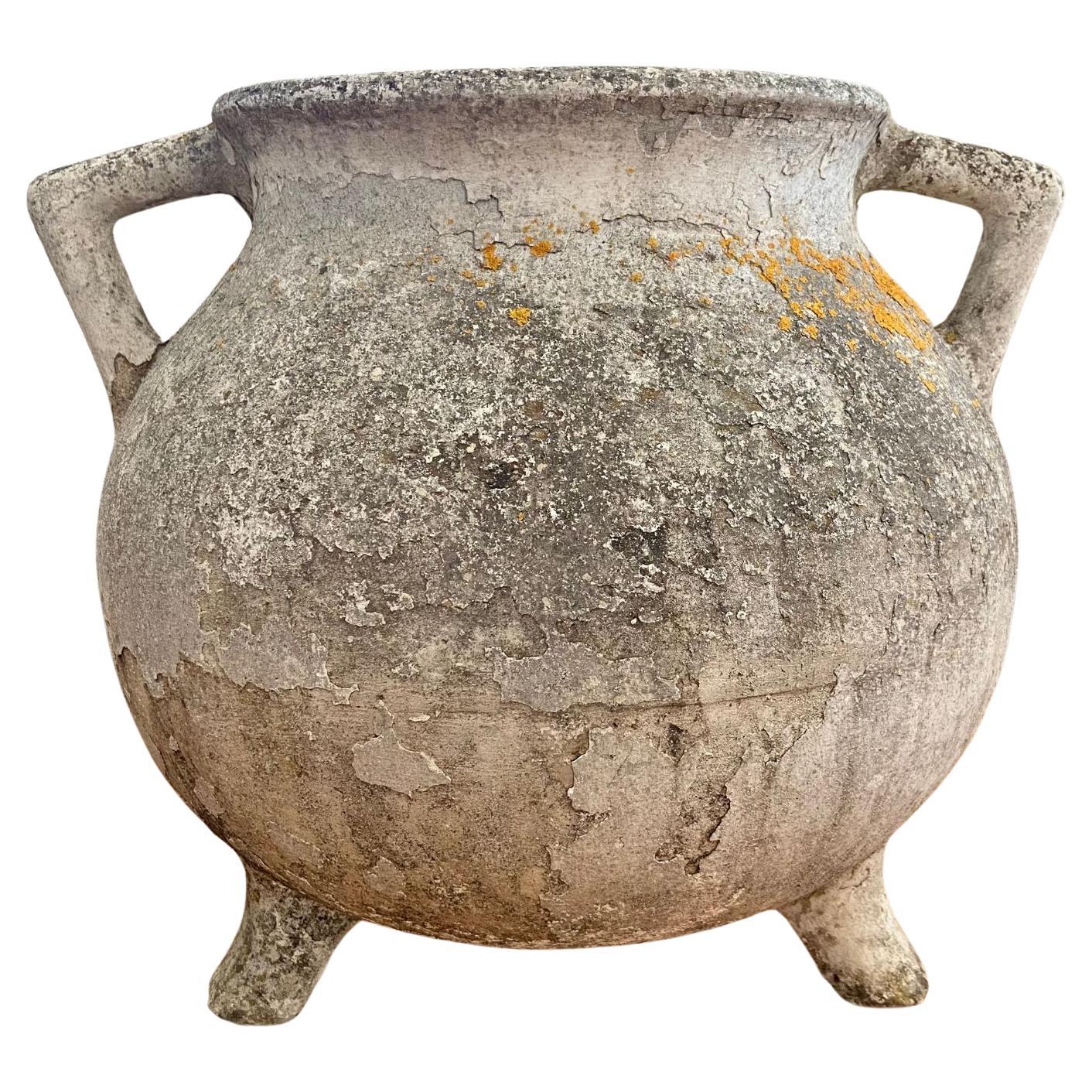 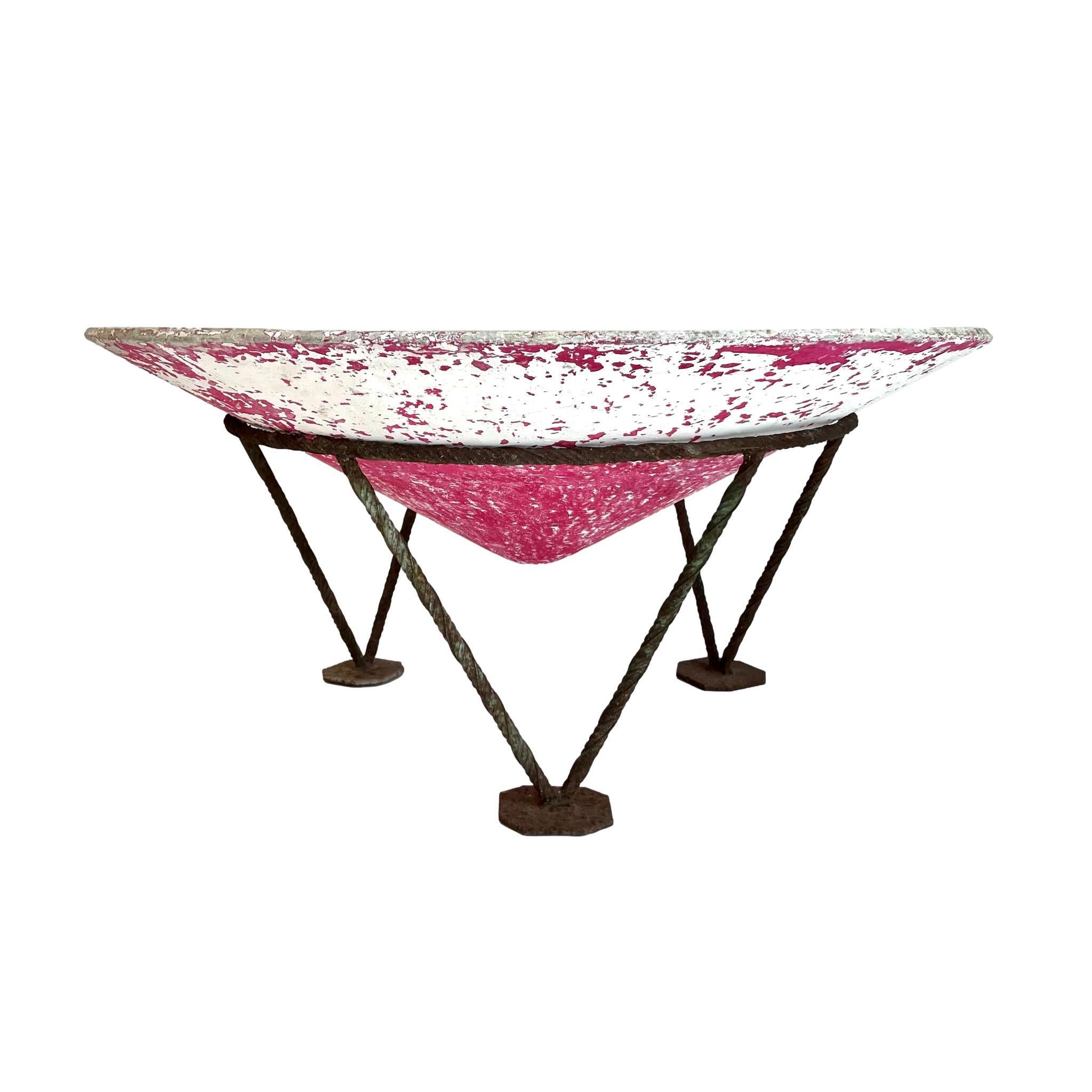 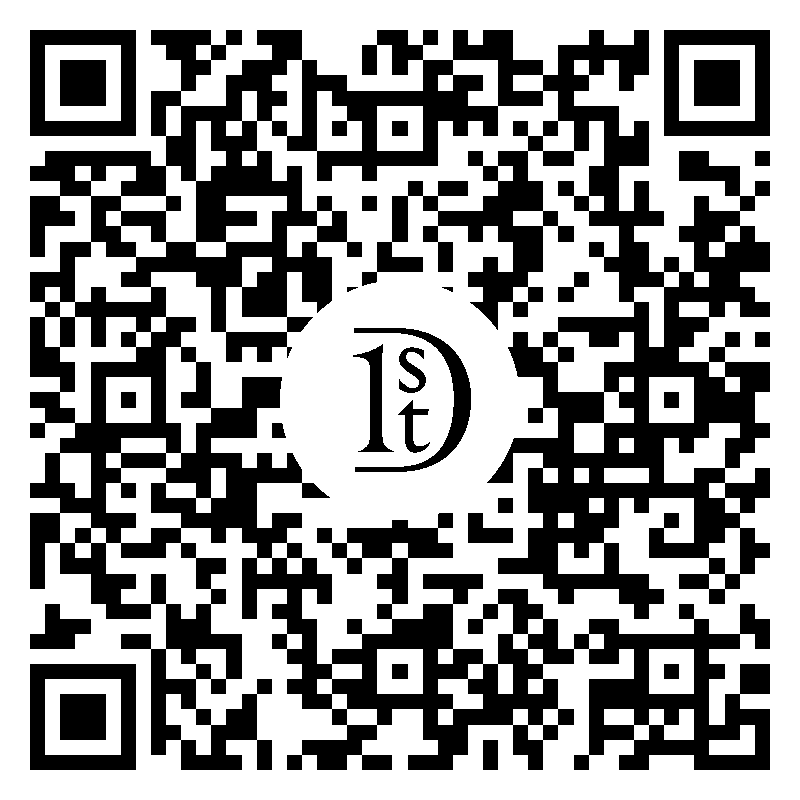 Willy Guhl for Eternit 47" planter on stand. Floating saucer planter on base. Sculptural garden vessel. The base can be flipped upside down for use as a second planter directly on soil Clean lines, modern design, timeless classic. Lovely patina with rich texture. Some surface wear. Hairline crack as seen in photo but structurally sound. Perfectly imperfect. Pictured with 31" planter for size reference only - listing is for one 47” planter. 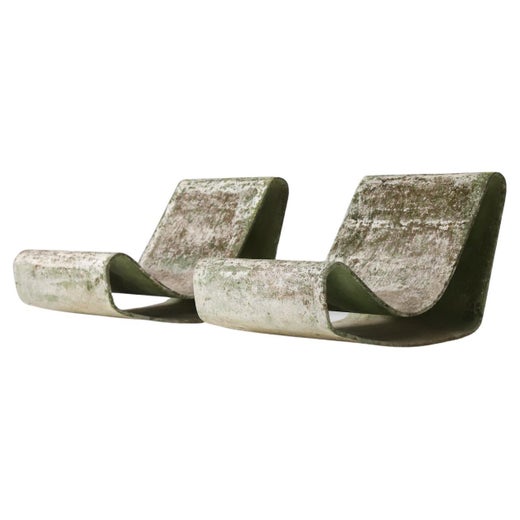 Decades prior to the mass popularity of neo-industrial cement floors and furniture taking shape, there was Willy Guhl. The Swiss creative is considered one of the first “industrial” designers in his home country. He pioneered a rugged, organic style of modern furniture and decor — stylish planters, shapely seating and lots more — that remains widely coveted by many today.

Guhl was born in 1915 in Stein am Rhein and worked as a carpenter before beginning studies at the Zurich School of Applied Arts (known today as the Zurich University of the Arts), where he would go on to teach for nearly 40 years.

While Guhl is well-known for his range of provocative garden elements as well as his patio and outdoor furniture, today’s legion of mid-century modern enthusiasts are likely familiar with the designer’s iconic Loop chair (introduced in 1954). For this sculptural seat and other furnishings, Guhl tended toward industrial materials, which he bent and shaped into organic forms for a striking juxtaposition. Much of his work is crafted from either concrete or Eternit, a mixture of cement and asbestos developed by the Belgian company Etex, which, in the 1950s, commissioned Guhl and his students at the School of Applied Arts to conceive planters in the material. The resulting vessels — some hourglass-shaped, some in the form of handkerchiefs, all suitable for indoors or exteriors — remain some of Guhl’s most collectible pieces.

Guhl’s affiliation with the Swiss “neo-functional” movement centered on the idea of simplifying design without sacrificing form. According to Guhl, his mission was “achieving the most with the minimum of effort.”

In addition to his work as a designer, Guhl left his mark on subsequent creatives through his 39-year tenure at his alma mater, where he was instructor to the likes of Robert Haussmann, Kurt Thut and Bruno Rey. Modern-day shoppers at IKEA owe Guhl a debt of gratitude too. He was an early advocate of flat-pack furniture, championing its ability to make good design more widely accessible.

At its core, though, Guhl’s work was inherently human-centric: “At the center of my efforts, I put people and their living requirements,” he once said. “My products must be useful to people.” Guhl died in 2004 at the age of 89.

Find a range of vintage Willy Guhl furniture and decorative objects on 1stDibs.

1stDibs Buyer Protection Guaranteed
If your item arrives not as described, we’ll work with you and the seller to make it right. Learn More
About the Seller
5.0
Located in Los Angeles, CA
Vetted Seller
These experienced sellers undergo a comprehensive evaluation by our team of in-house experts.
Established in 2021
1stDibs seller since 2022
20 sales on 1stDibs
Typical response time: <1 hour
More From This SellerView All
People Also Browsed
You May Also Like