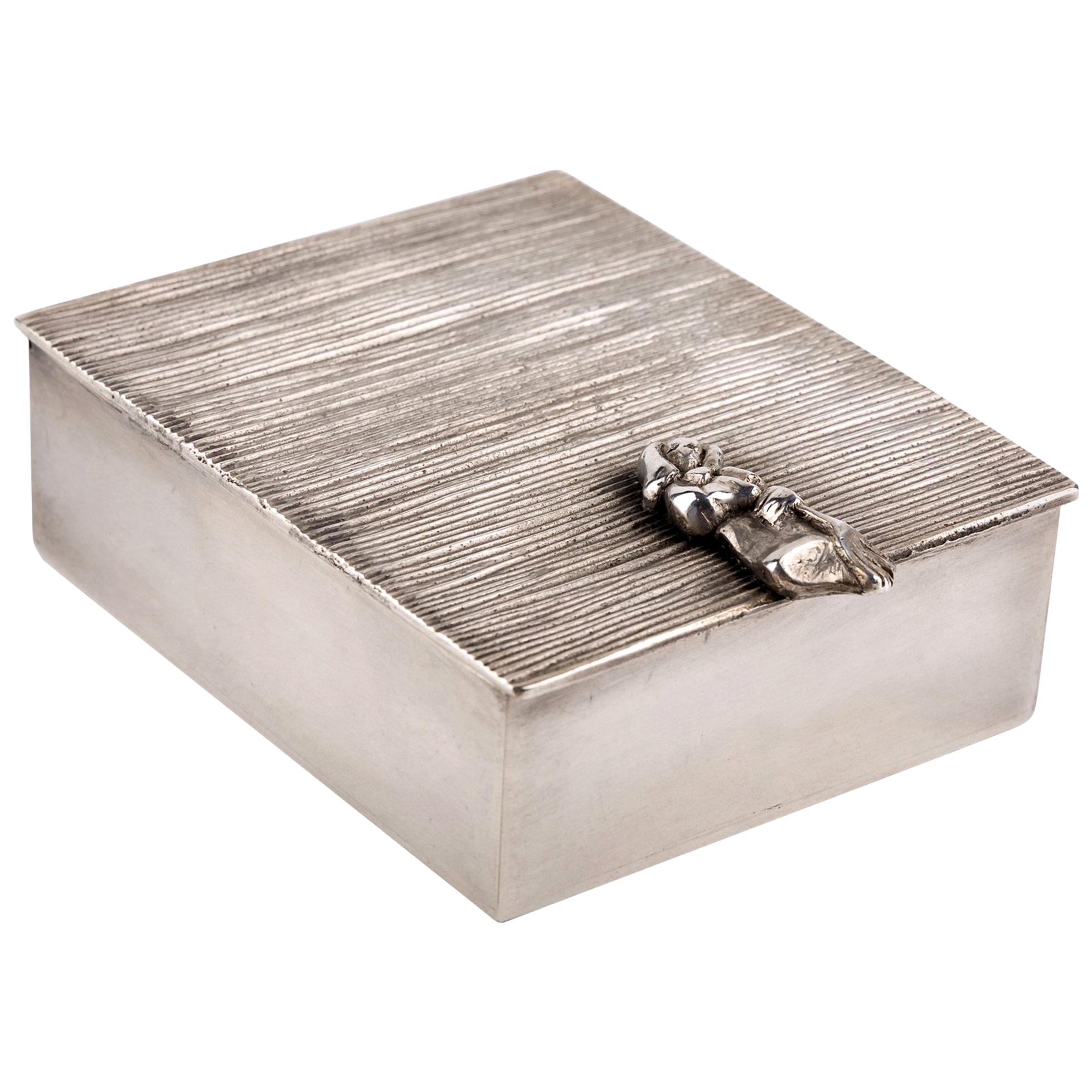 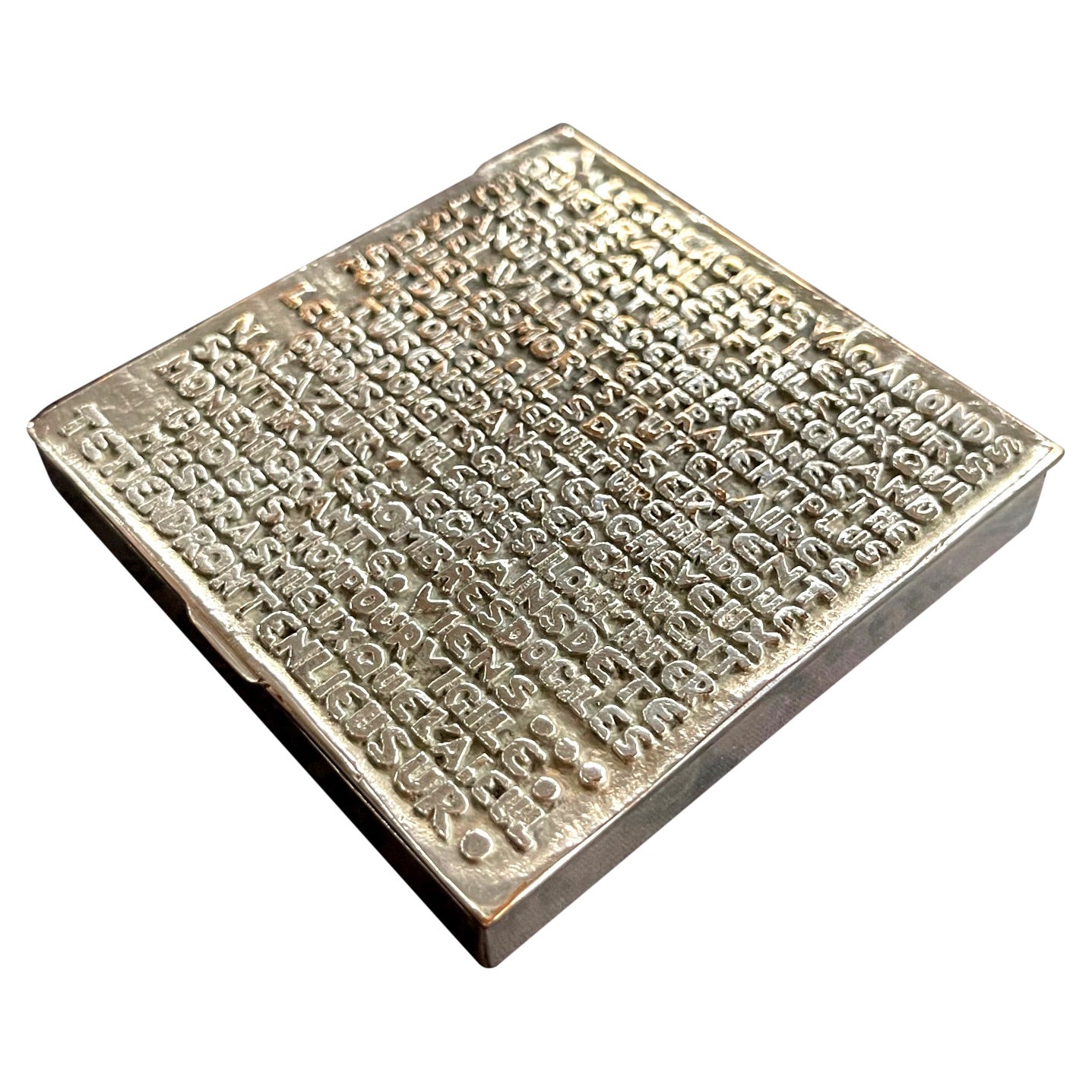 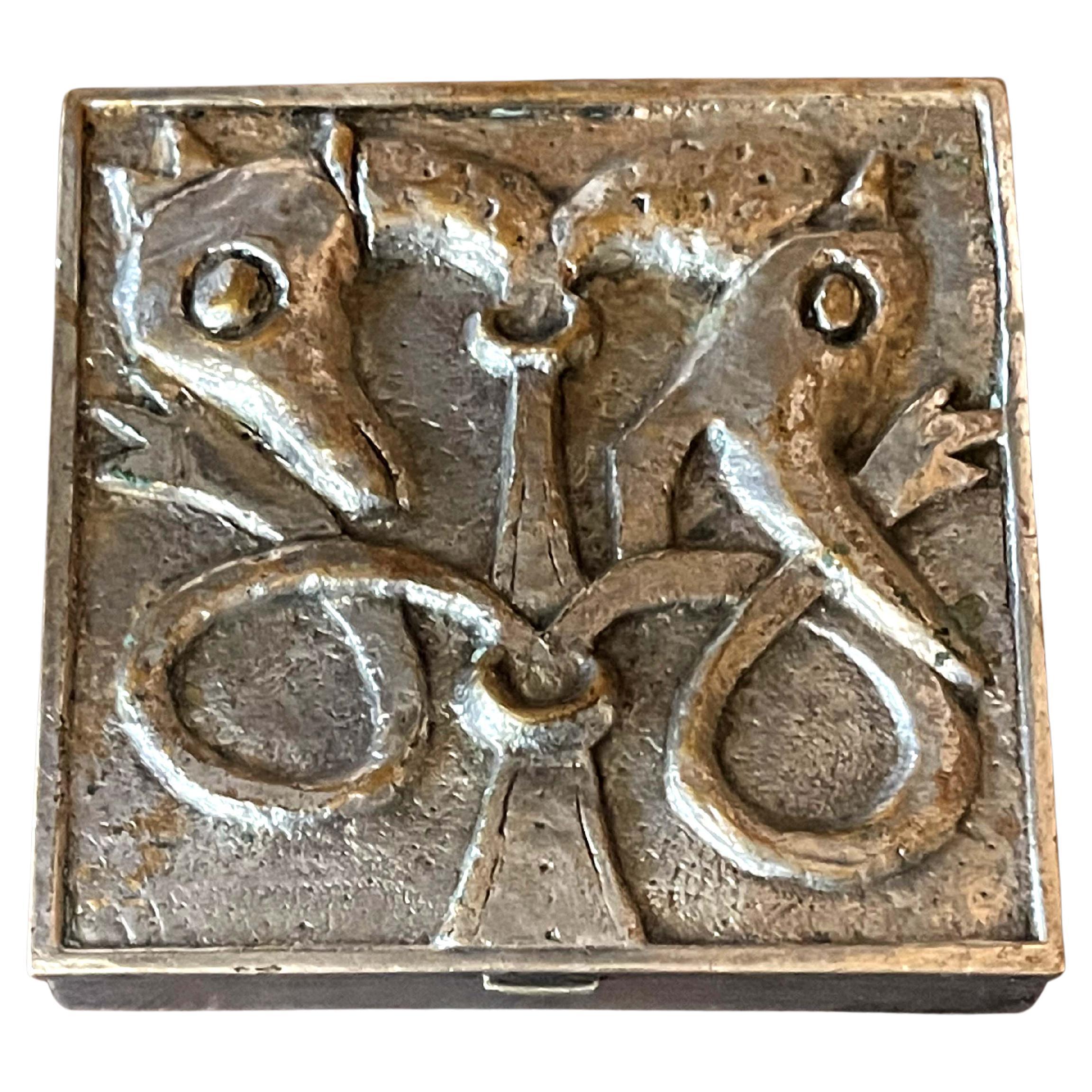 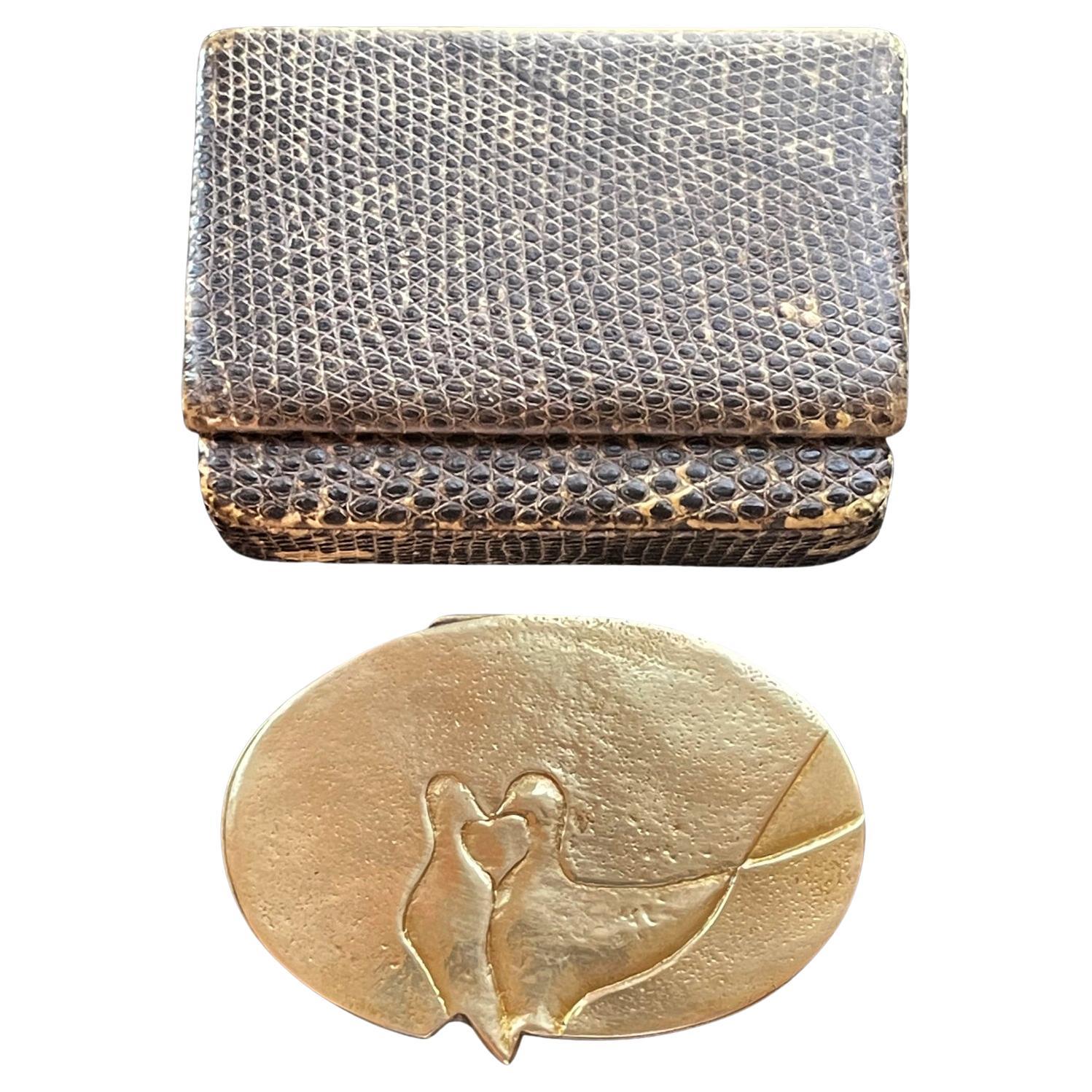 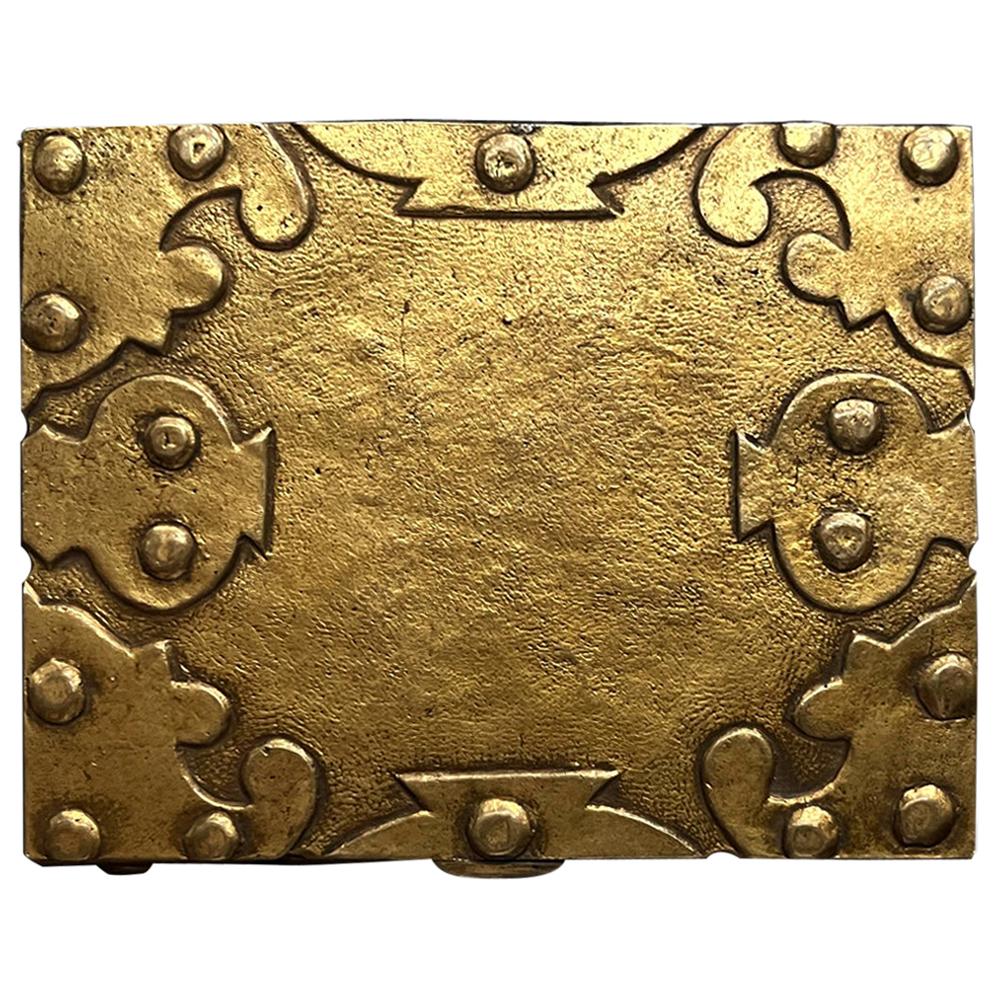 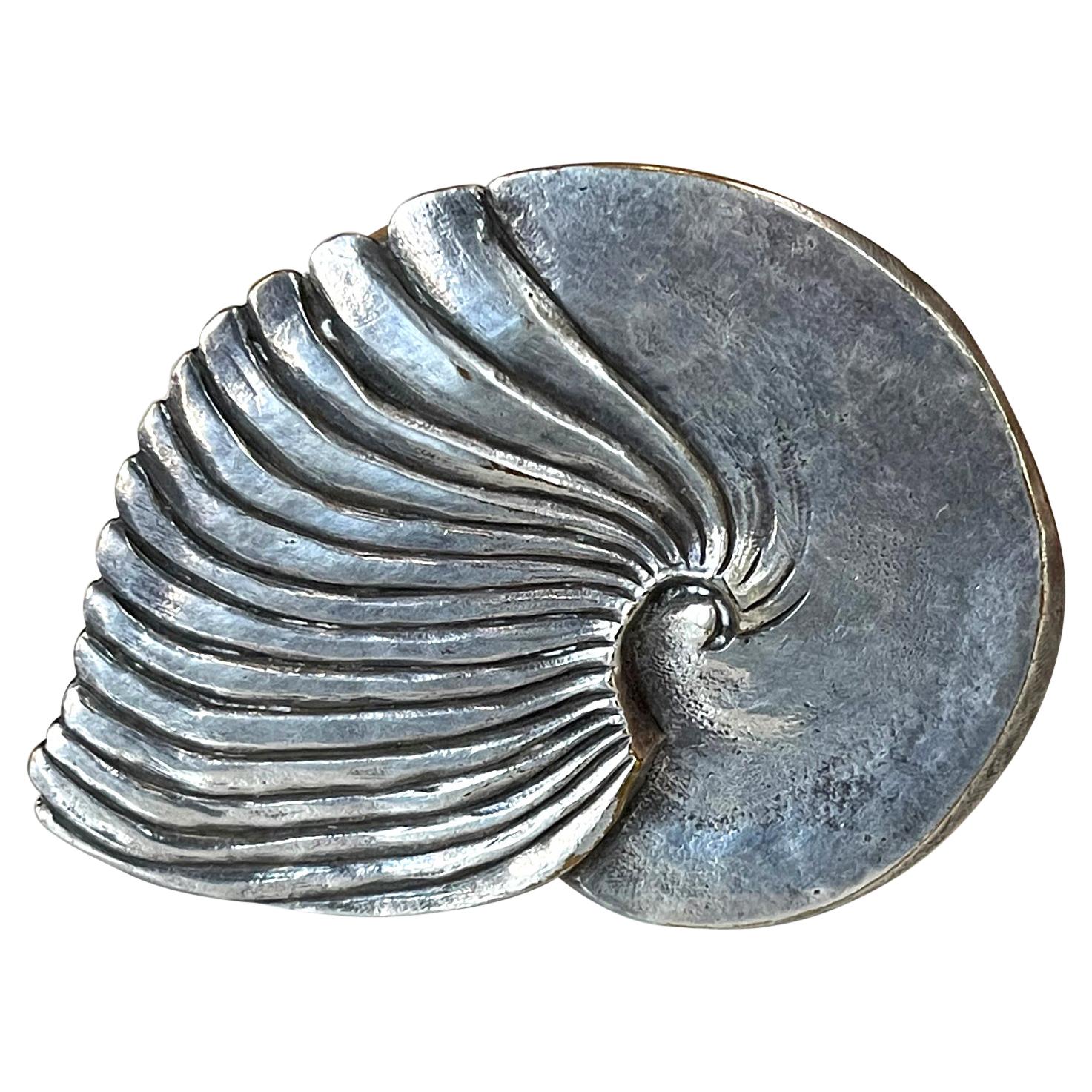 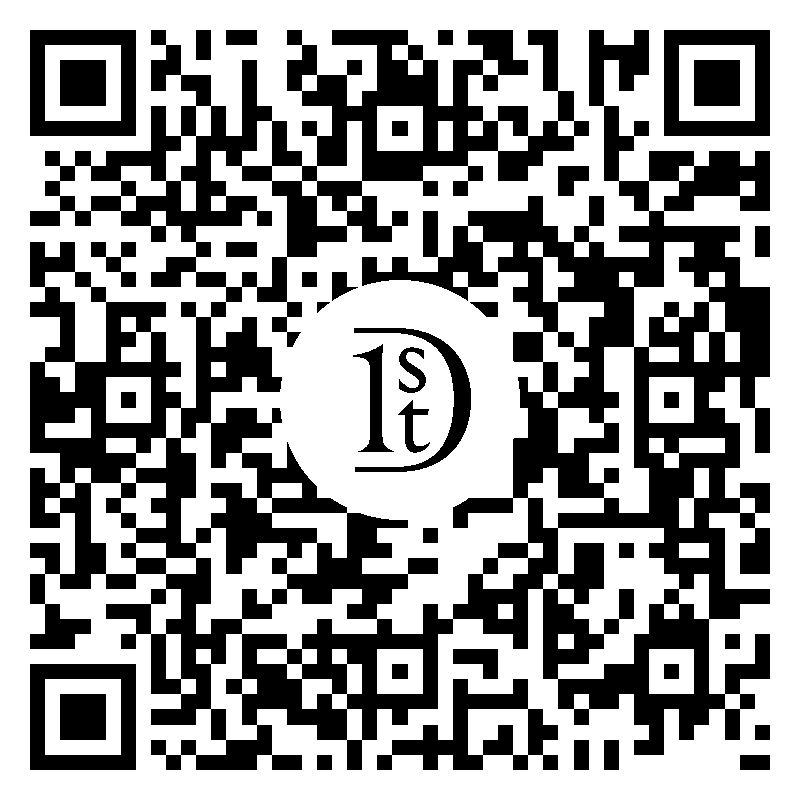 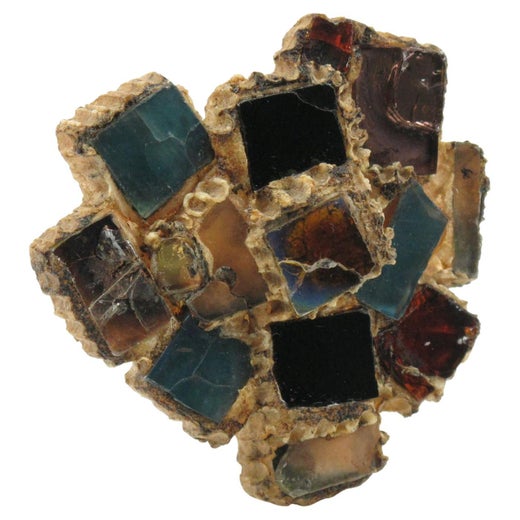 Celebrated as the “poetess of metal” by Vogue magazine, designer Line Vautrin’s provocative works, which span furniture and jewelry, are characterized by fanciful forms and technical excellence. An audacious decorative artist and intellectual during a time when women were expected to fall into traditional roles, her inspirational designs show her passion for literature, wordplay and mythological allegory.

Born in 1914, Vautrin possessed a sense of curiosity and keen observational skills that led her to start creating at an early age. A talented autodidact, she taught herself to work with metal while spending time in her family’s bronze foundry. Vautrin had already mastered the skills of casting, carving, gilding and polishing bronze by the time she was in her early teens, and introduced her first line of jewelry when she was only twenty years old, offering her unique brooches, belt clasps and buttons to a select group of customers. In 1937, Vautrin helmed a small booth at the Paris International Exposition, where she gained some notoriety for her handcrafted accessories. Around the same time, Vautrin worked briefly for Elsa Schiaparelli, a like-minded fashion designer whose achievements propelled her onto the cover of Time magazine in 1934.

Vautrin opened a modest boutique near the Champs-Élysées in the late 1930s. During World War II, she created playful and sophisticated necklaces, powder boxes, earrings and other items that gave her clientele a welcome respite from wartime hardships. There was great demand for Vautrin’s work, and she opened a larger shop on rue du Faubourg Saint-Honoré in 1946. Shortly thereafter, she opened her own atelier in Paris’s then run-down Marais district with her husband, interior decorator Jacques Armand Bonnaud. The neighborhood would later become world-famous for its boutiques and designer shops.

Vautrin’s boundless curiosity led her to constantly experiment with new materials and processes. In 1955, she perfected her technique with a new form of cellulose acetate resin, which she patented under the name Talosel. Vautrin used this material extensively to create complicated mirrored inlays, which became one of her signature motifs.

Throughout her life, Vautrin played with literary and religious iconography in her designs, drawing inspiration from common aphorisms, ancient world mythologies and alchemical principles. Her passion for symbology and the written word is reflected in her work, which often features intricate lettering and carefully rendered shapes and figures. Vautrin's pieces were imbued with her own sense of humor and love of fantasy.

In 1969, Vautrin closed her shop, and, alongside her daughter, Marie-Laure Bonnaud-Vautrin, opened a craft school to teach her innovative techniques to aspiring artists. Vautrin retired in 1980 but continued to create art from her apartment up until her death in 1997. Her individualism earned her a place among the most iconic creators of mid-century jewelry and decorative objects. Actress Brigitte Bardot and fashion designer Yves Saint Laurent became notable collectors of her work.

In 1992, Vautrin was recognized for her work in developing new decorative techniques by the Société d'Encouragement aux Métiers d’Art (later the Institut National des Métiers d’Art). Her designs were also celebrated by the Musée des Arts Décoratifs, which held a retrospective of her works in 1999.

About the Seller
4.9
Located in Atlanta, GA
Platinum Seller
These expertly vetted sellers are 1stDibs' most experienced sellers and are rated highest by our customers.
Established in 2006
1stDibs seller since 2010
371 sales on 1stDibs
Typical response time: <1 hour
More From This Seller

$10,423
Silvered Bronze Box “Ophélie”, Line Vautrin, France
By Line Vautrin
Located in Brussels, BE
The lid of this box depicts Ophelia, a fictional character from William Shakespeare’s Hamlet tragedy, singing just before her drowning. The object was probably manufactured in th...
Category

$4,523
Les Filles de Neptune by Line Vautrin, Silvered Bronze Box, France
By Line Vautrin
Located in Brussels, BE
Silvered bronze box whose lid is finely chiseled with an illustration of mythological figures. This model is also sometimes referred to as "Zeus Daughters". Signed by stamping on...
Category

Large Bronze and Talossel Box in the Style of Line Vautrin

$1,770
Max Le Verrier French Art Deco Bronze Jewelry Box
By Max Le Verrier
Located in Miami, FL
This Max Le Verrier bronze makes a wonderful small jewelry box or use it as a desk accessory for holding paper clips or coins, etc... It is very unique and from the wonderful Art Dec...
Category

$360 Sale Price
20% Off
1920s French Art Nouveau Bronze Hinged Apple Trinket Box Candle Stick '1'
Located in Haarlem, NL
Antique hinged bronze apple on a twig with leaves, to use as candle stick, or just as a decorative piece. I usually see them not this 'high' on the branches and the apple as a little...
Category