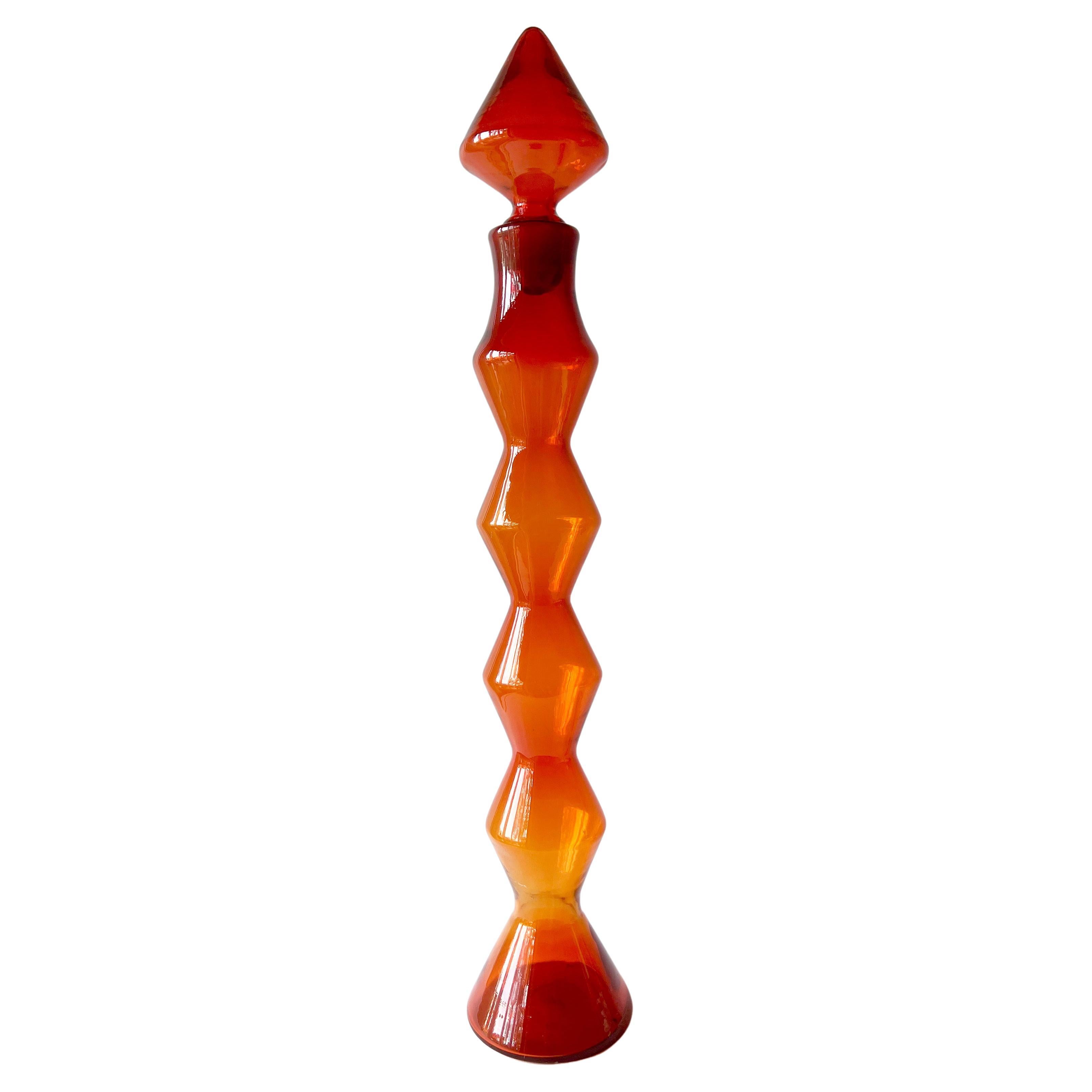 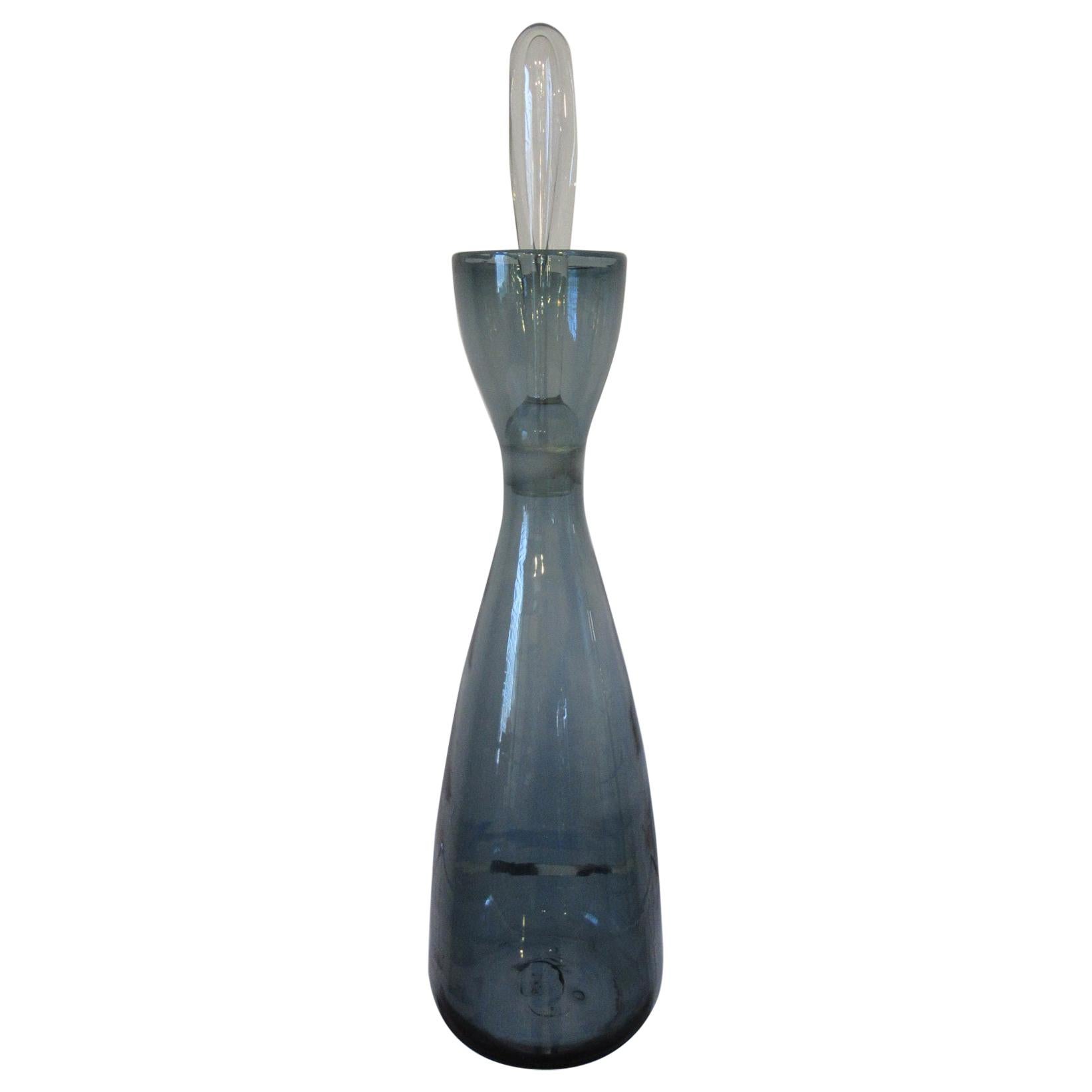 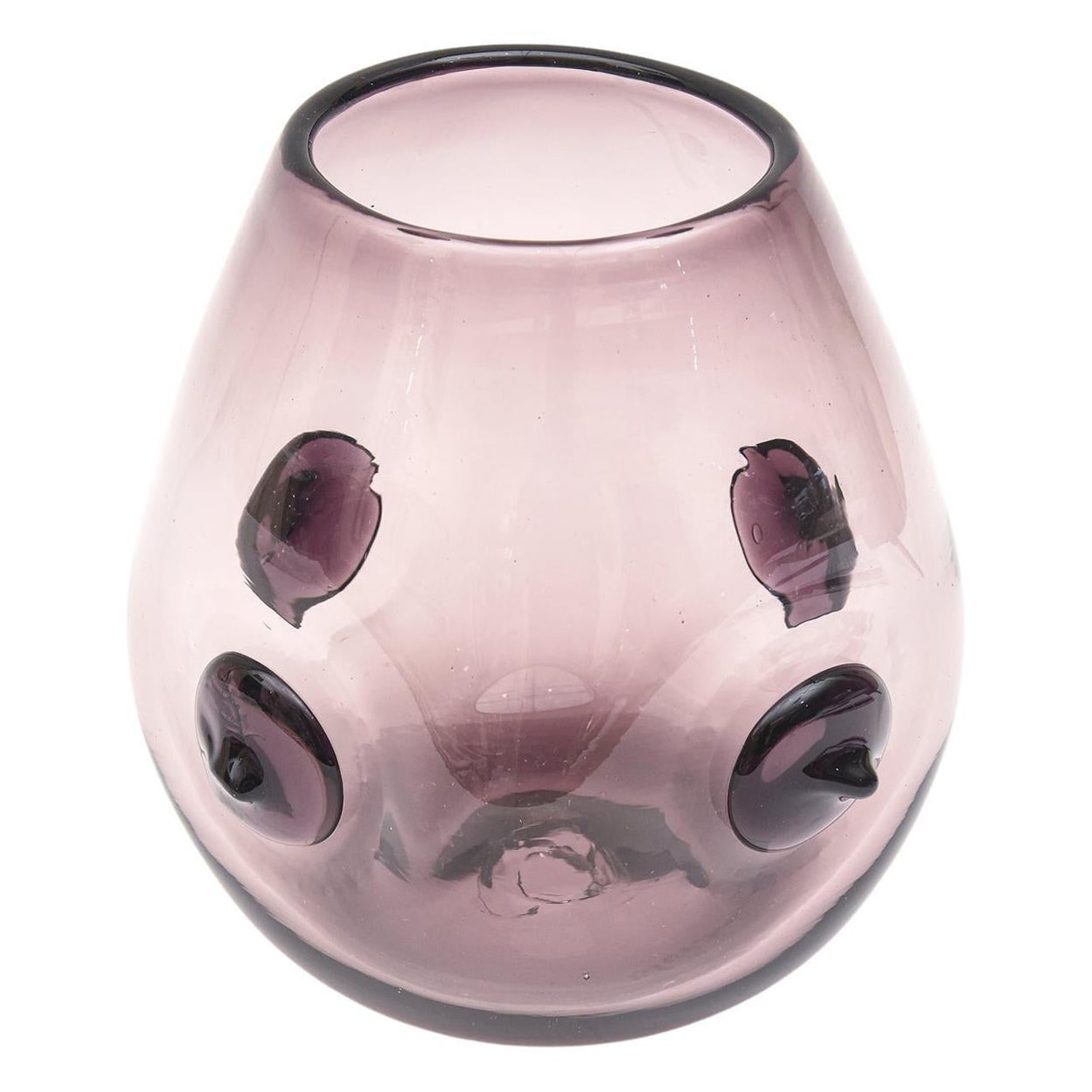 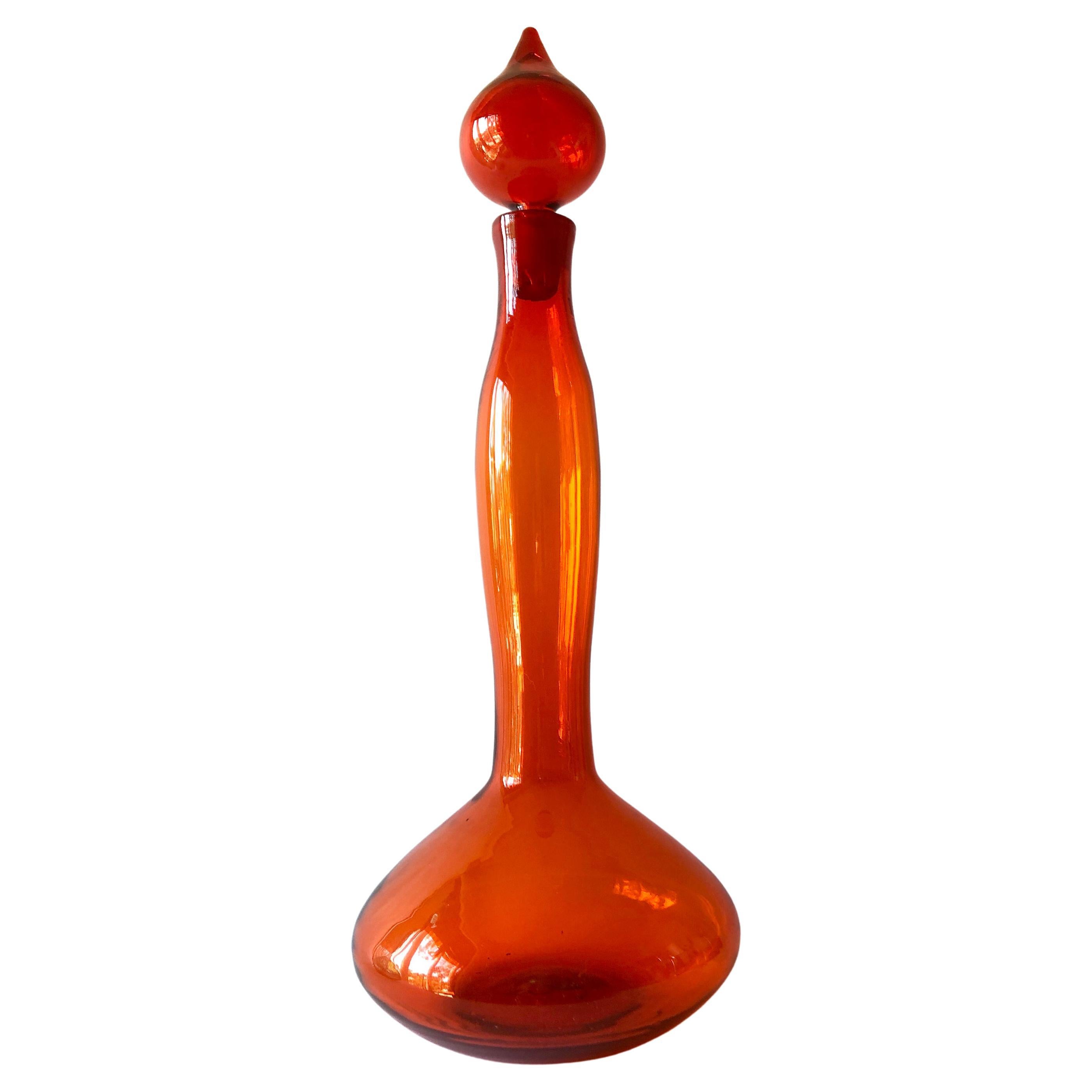 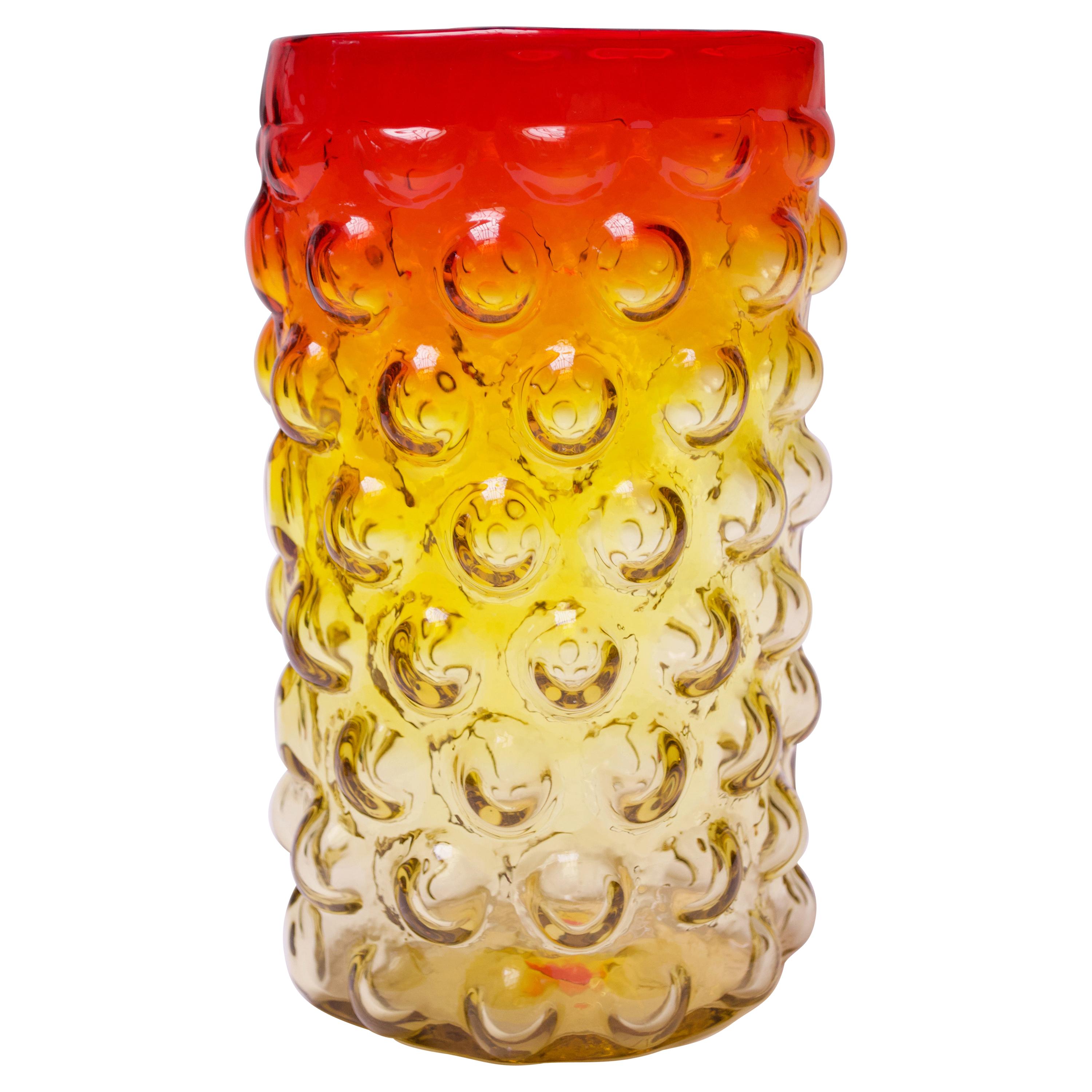 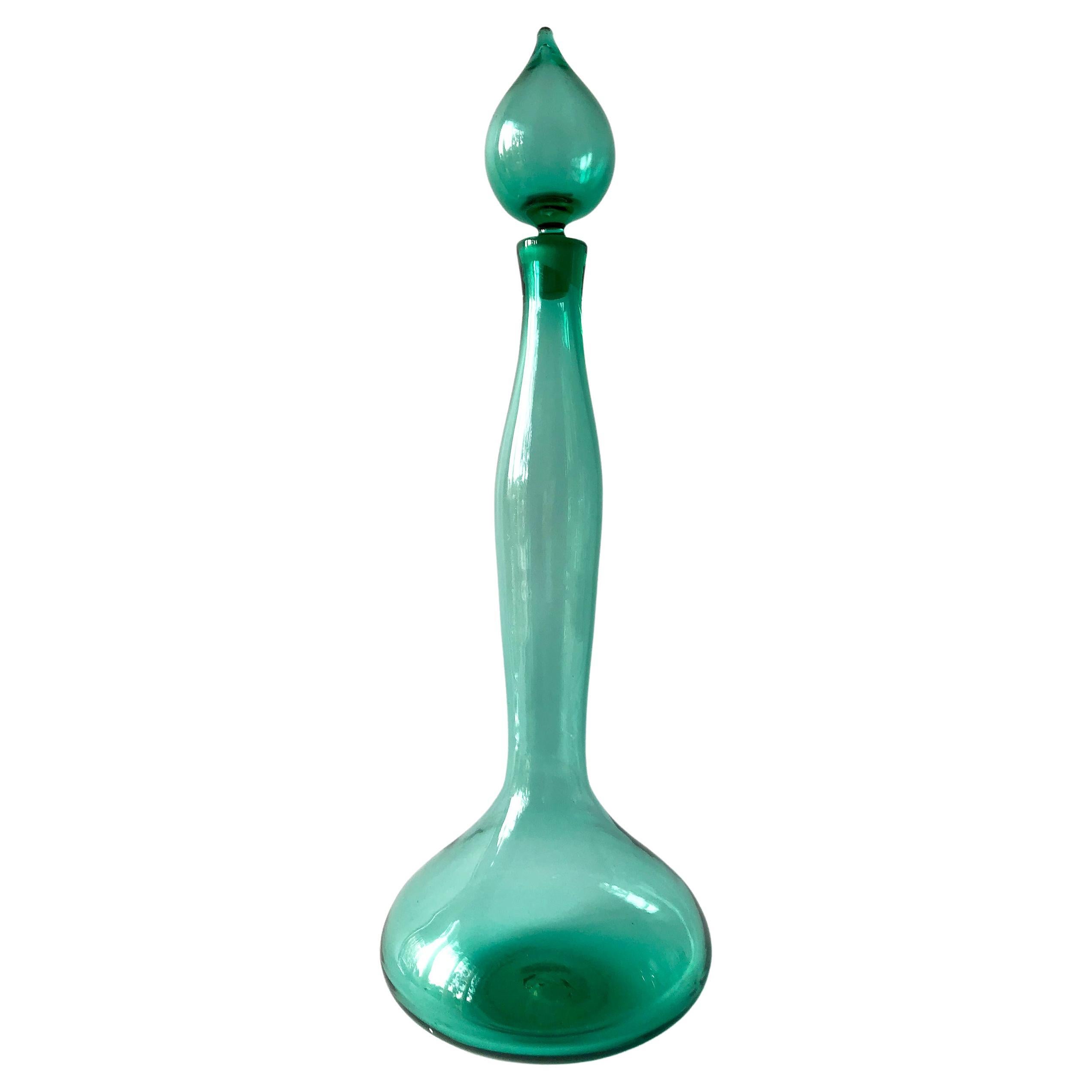 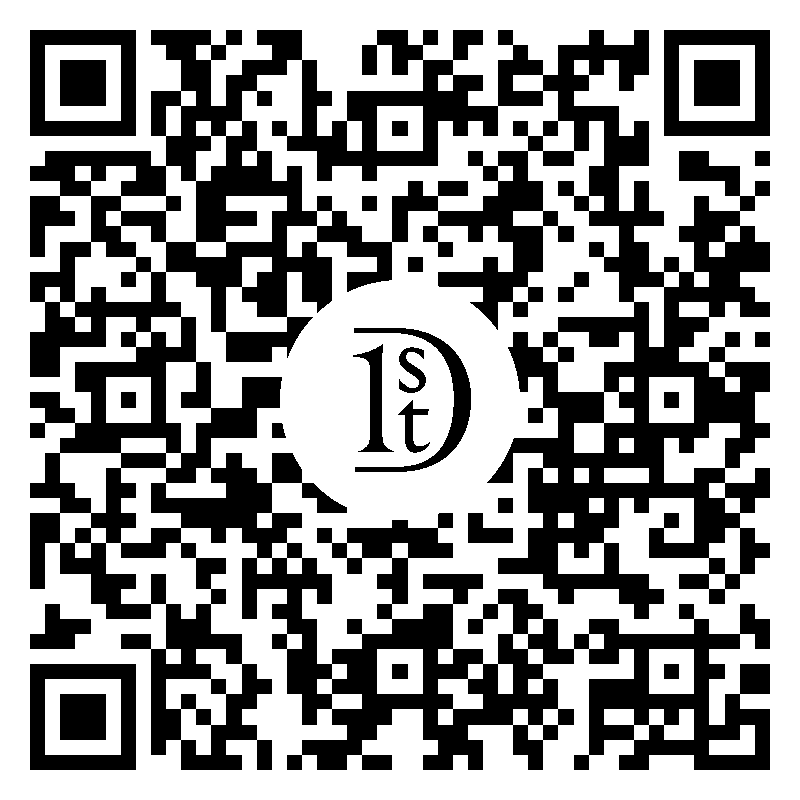 This is a wonderful example of mid-century modern Blenko architectural decanter 30 inches height, which is the 588, designed by Wayne Husted 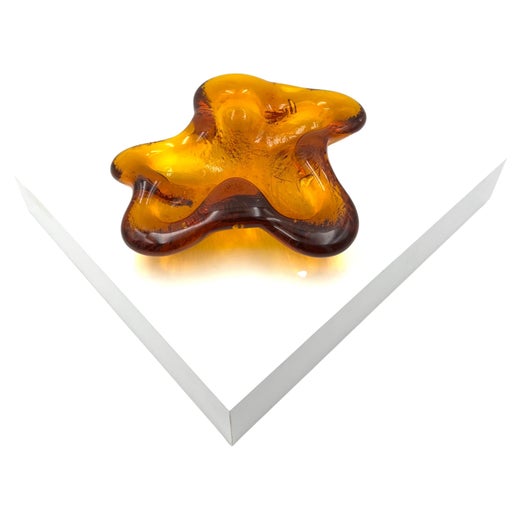 The company was founded by William J. Blenko, an English immigrant who was apprenticed to a glassmaker in his native London as a young man. Blenko developed expertise in the production of rondels, the round panes used in stained glass windows. His interest in the potential of natural gas to fire glass furnaces led him to Milton, where abundant reserves of the fuel had attracted a pool of skilled glassblowers. Under the name Eureka Glass, his company began making window glass in 1923, and in 1925, he was joined in the business by his son, William H. Blenko.

When the Great Depression quelled demand for stained glass, William J. Blenko brought local Milton glassblowers into the company to begin producing stem- and tableware, products for which the company, which changed its name to Blenko in 1930, is now best known. Up until the end of World War II, Blenko’s tableware designs were fairly straightforward, and they sold well at American department such as Gump’s, in San Francisco. The company was also commissioned in 1930 to produce a line of reproductions for Colonial Williamsburg.

In 1947, the company hired as its art director Winslow Anderson, who introduced artful, fanciful and modern vessels and objects in vibrant colors. This began what collectors refer to as Blenko’s “historic period.” A number of Anderson’s designs were honored by the Museum of Modern Art’s Good Design Awards in 1950, and throughout the 1950’s and ‘60s, the company enjoyed robust sales and critical acclaim. The forms Blenko produced during this period followed the contemporary vogue for biomorphism, or organic modernism, which favored rounded and fluid shapes inspired by nature.

One of Blenko’s most influential designers, Wayne Husted, who was active from 1953 to ’63, is credited with aligning Blenko’s products with the prevailing mid-century modern aesthetic by pushing the envelope on both form and color, particularly in his wedge-cut and Spool decanters and his Echoes series. Joel Philip Myers, who designed for Blenko in the 1960s, brought a sense of whimsy and visual excess to the product line, in keeping with the psychedelic look favored during the period.

Blenko Glass still produces many of its classic designs in items ranging from stemware and tableware to decorative objects and ornamental decanters. Among collectors, pieces created under Husted’s creative direction are of special interest. The company has come to the attention of younger audiences through the documentaries Blenko: Hearts of Glass and Blenko Retro: Three Designers of American Glass, both of which aired on PBS. Blenko also designed the glass award trophy for the Country Music Awards.

1stDibs Buyer Protection Guaranteed
If your item arrives not as described, we’ll work with you and the seller to make it right. Learn More
About the Seller
5.0
Located in East Hampton, NY
Vetted Seller
These experienced sellers undergo a comprehensive evaluation by our team of in-house experts.
Established in 2000
1stDibs seller since 2007
407 sales on 1stDibs
Typical response time: <1 hour
Associations
20th Century Specialists
More From This SellerView All
People Also Browsed
You May Also Like