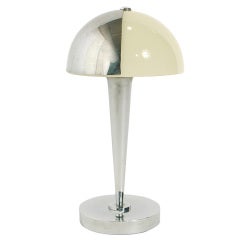 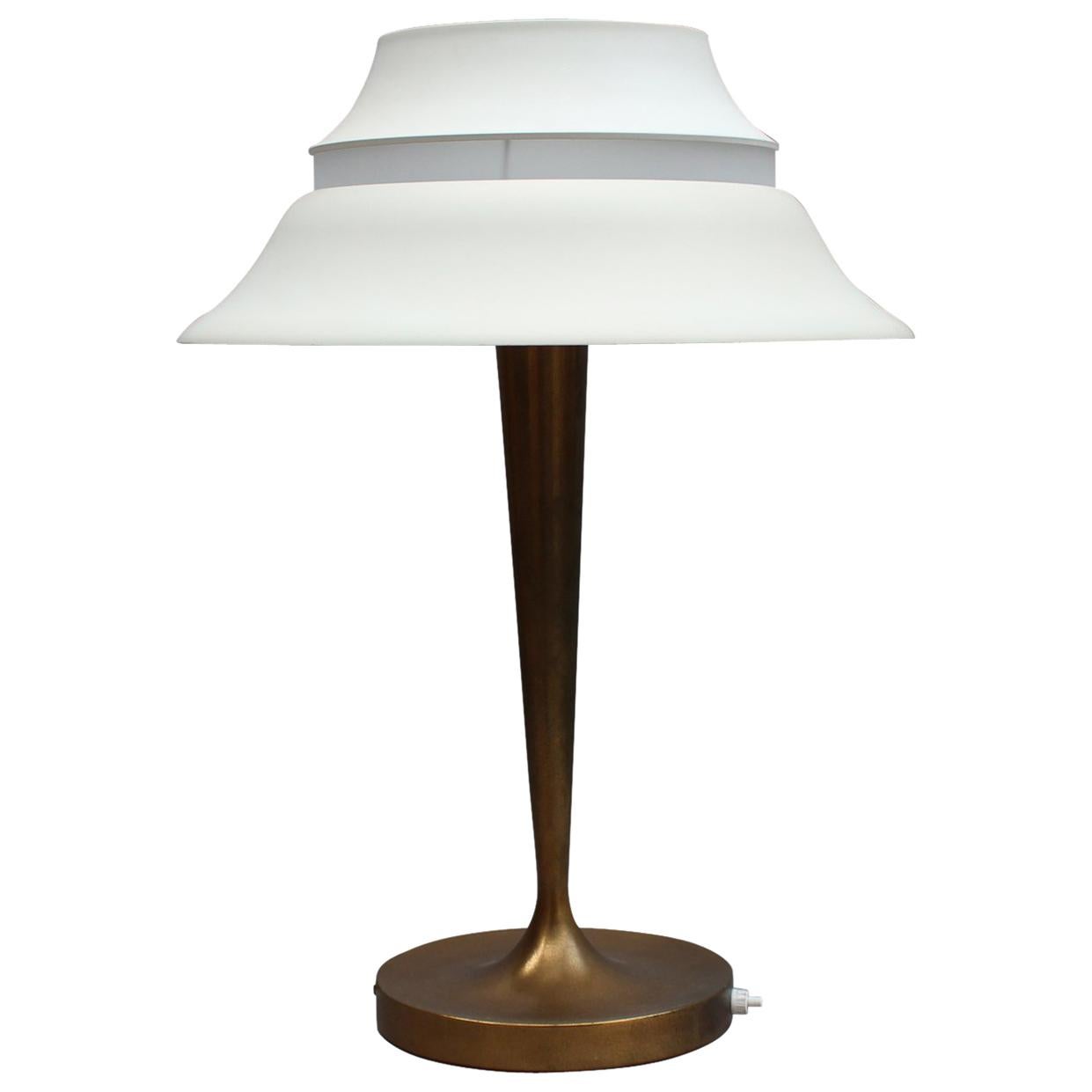 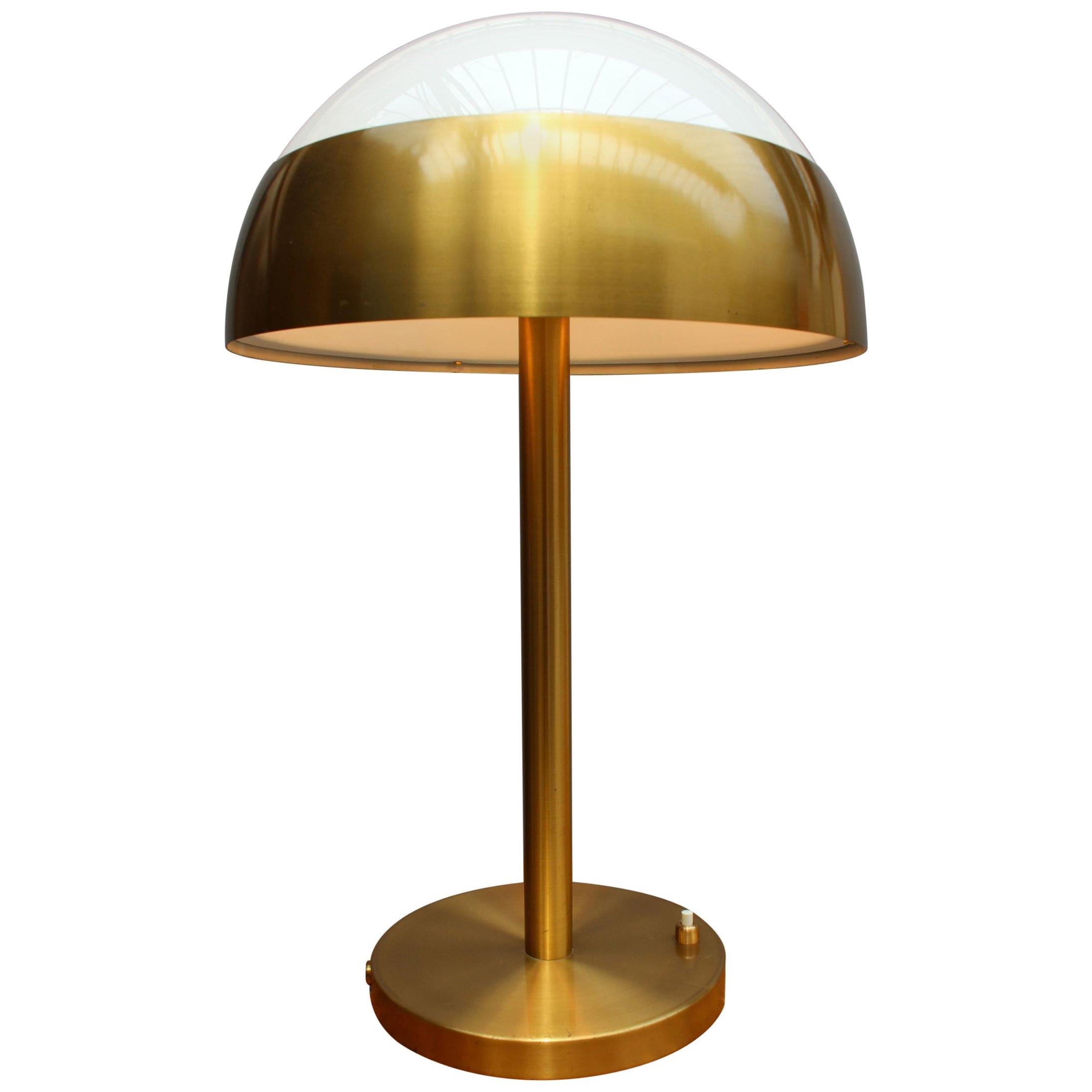 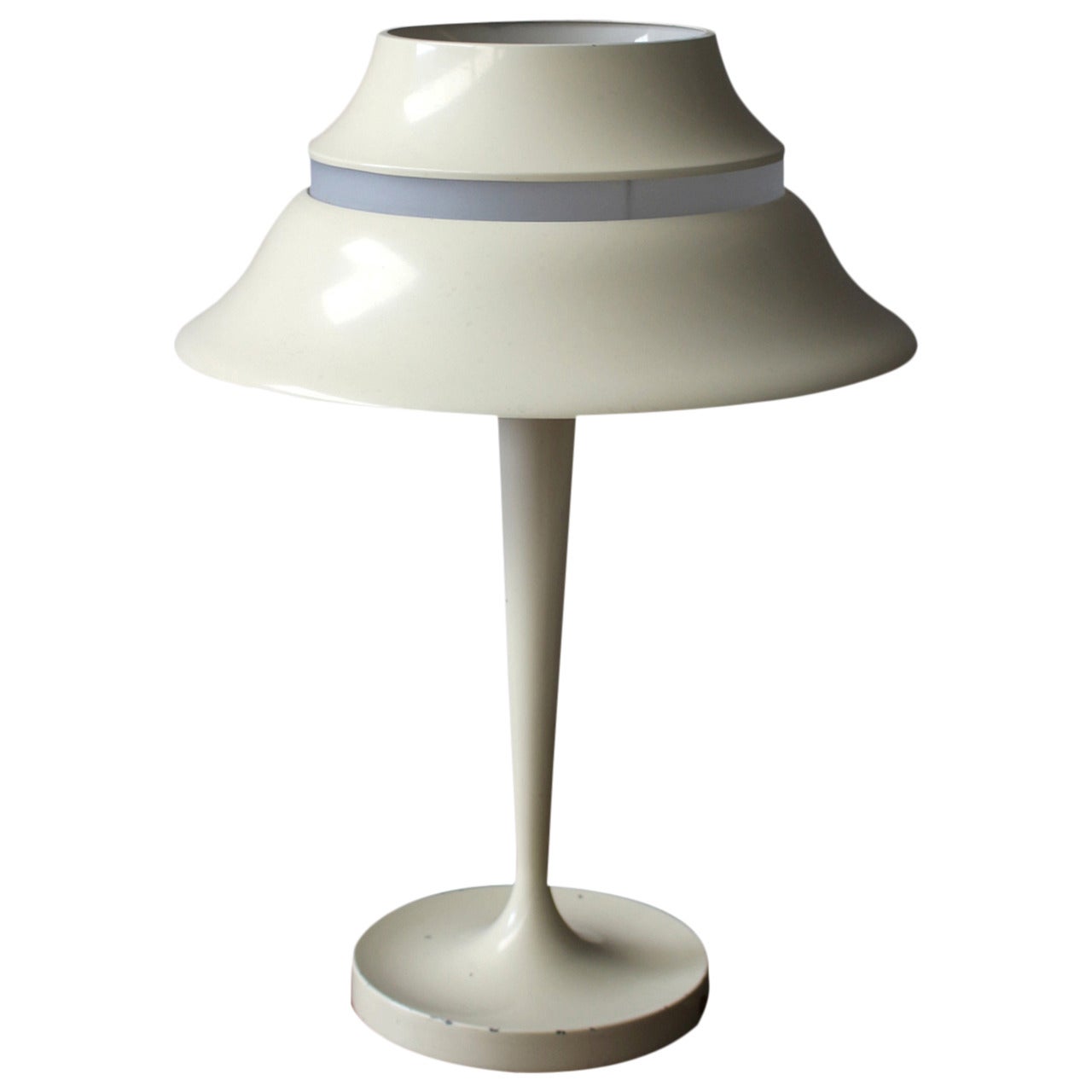 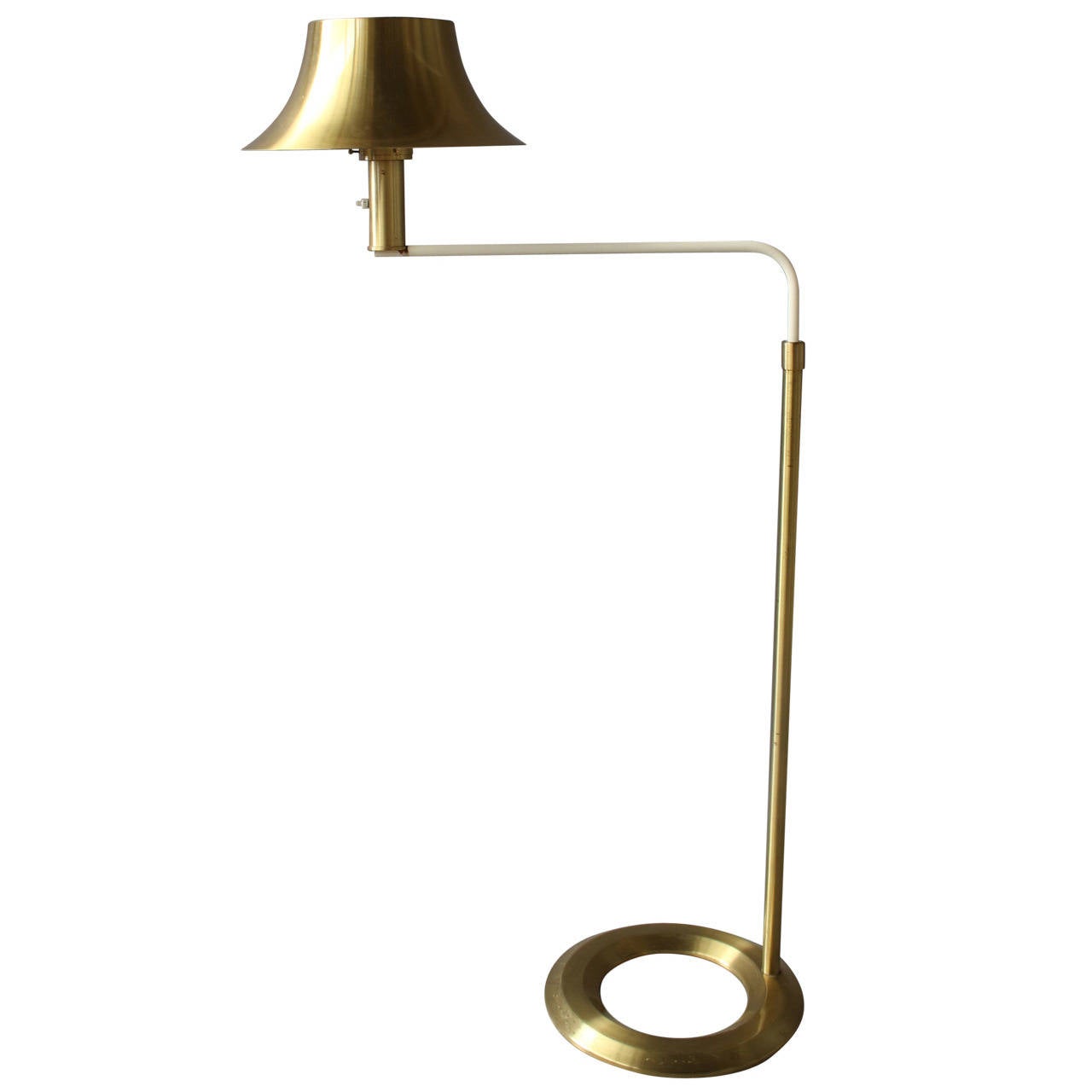 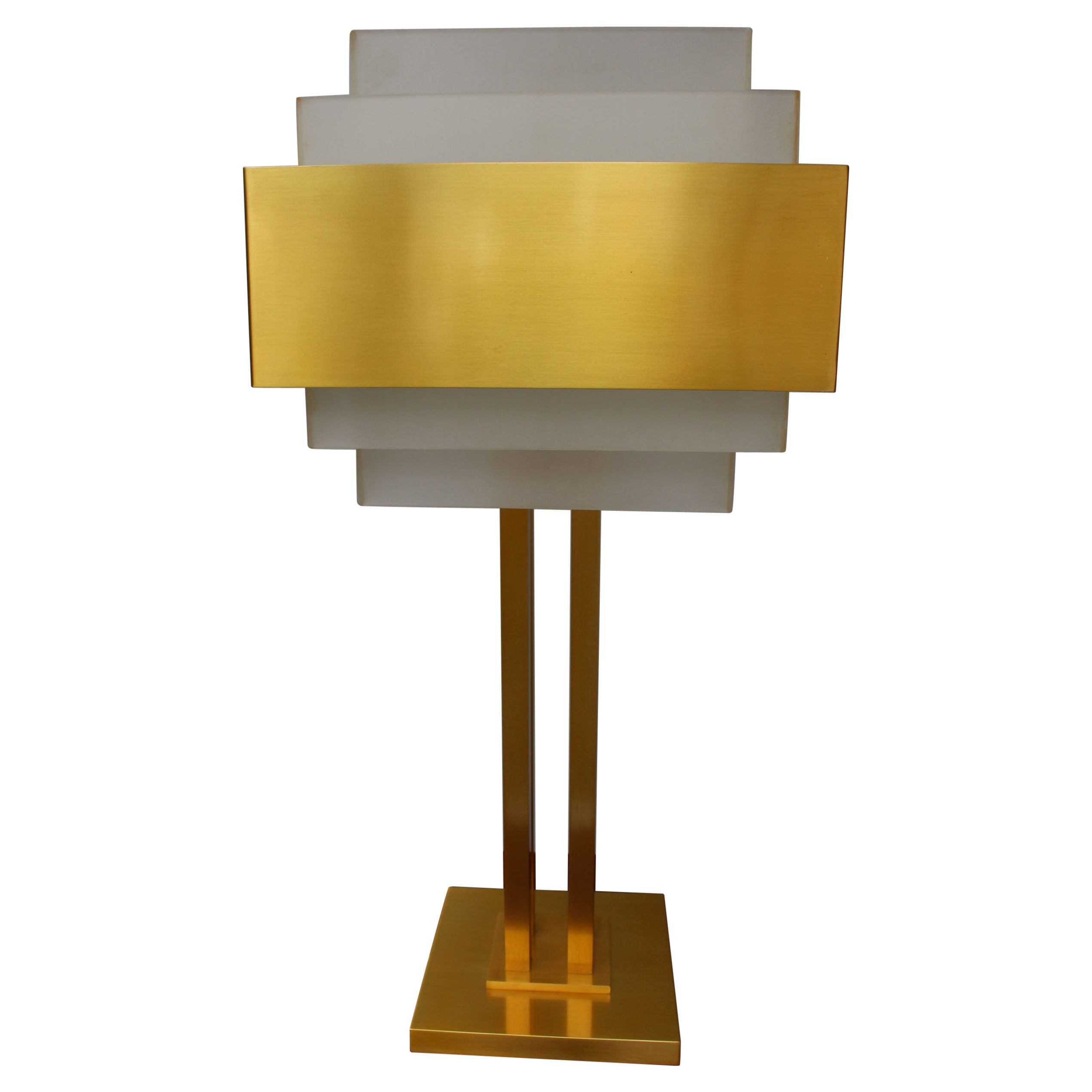 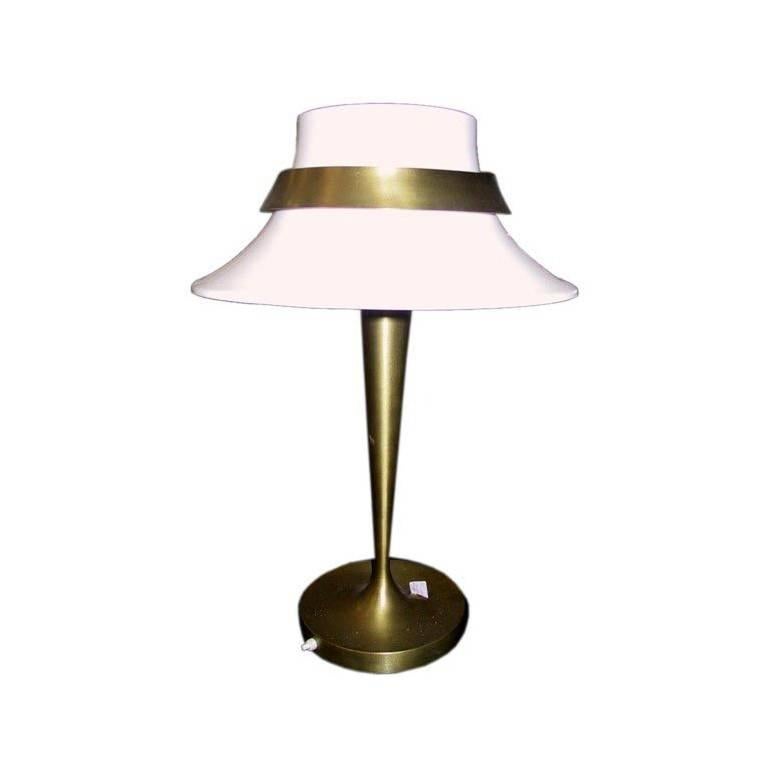 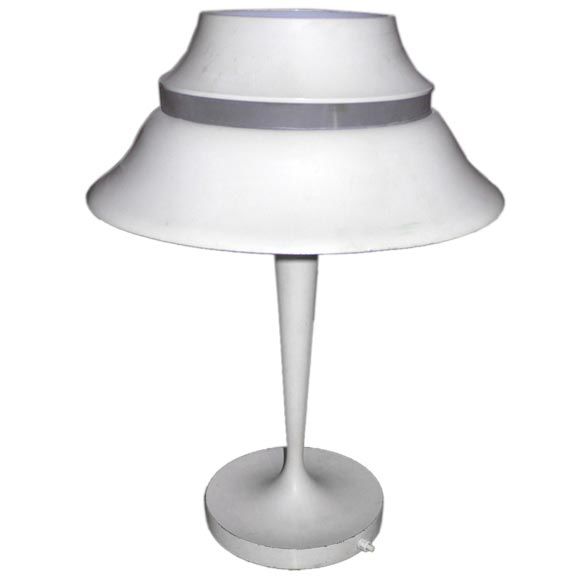 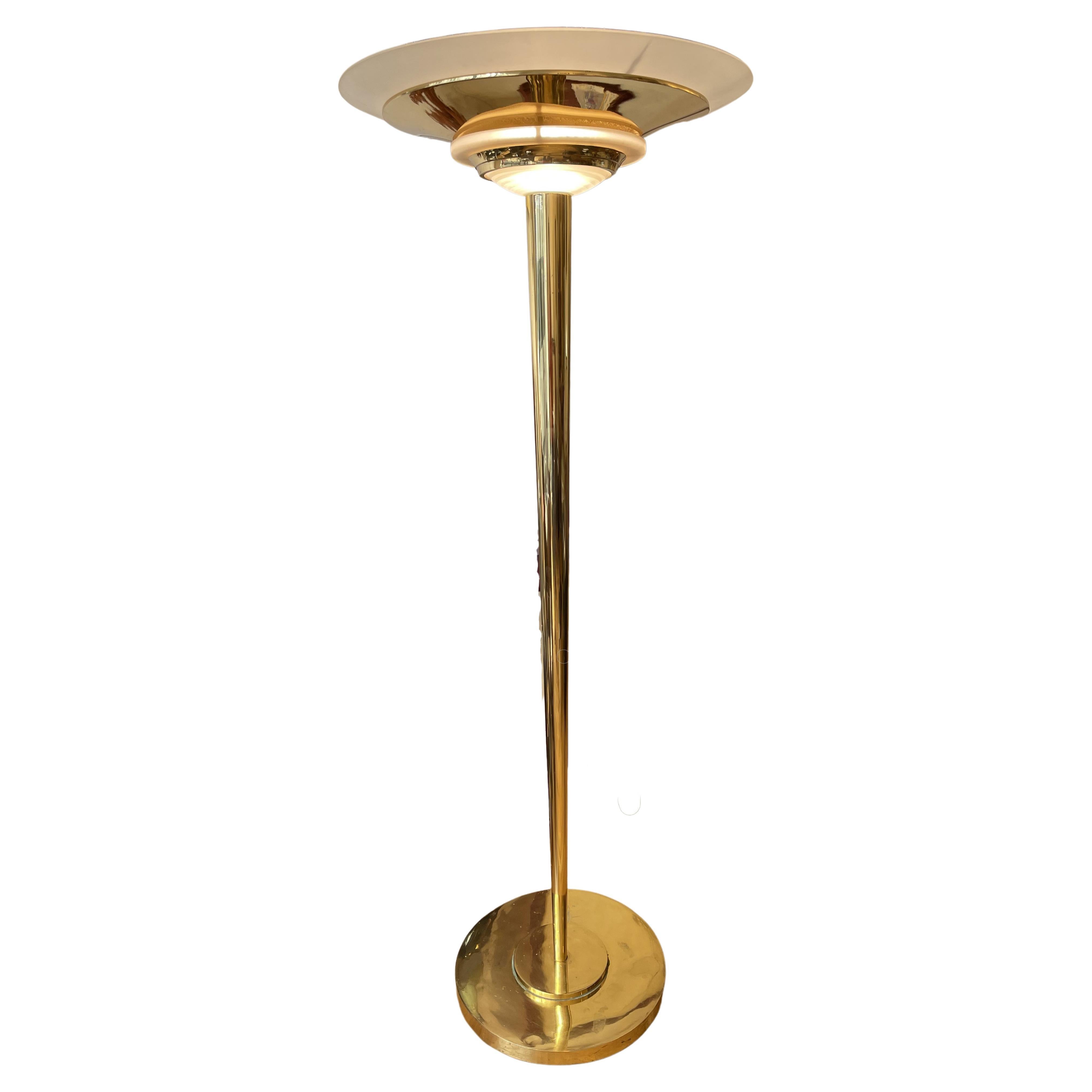 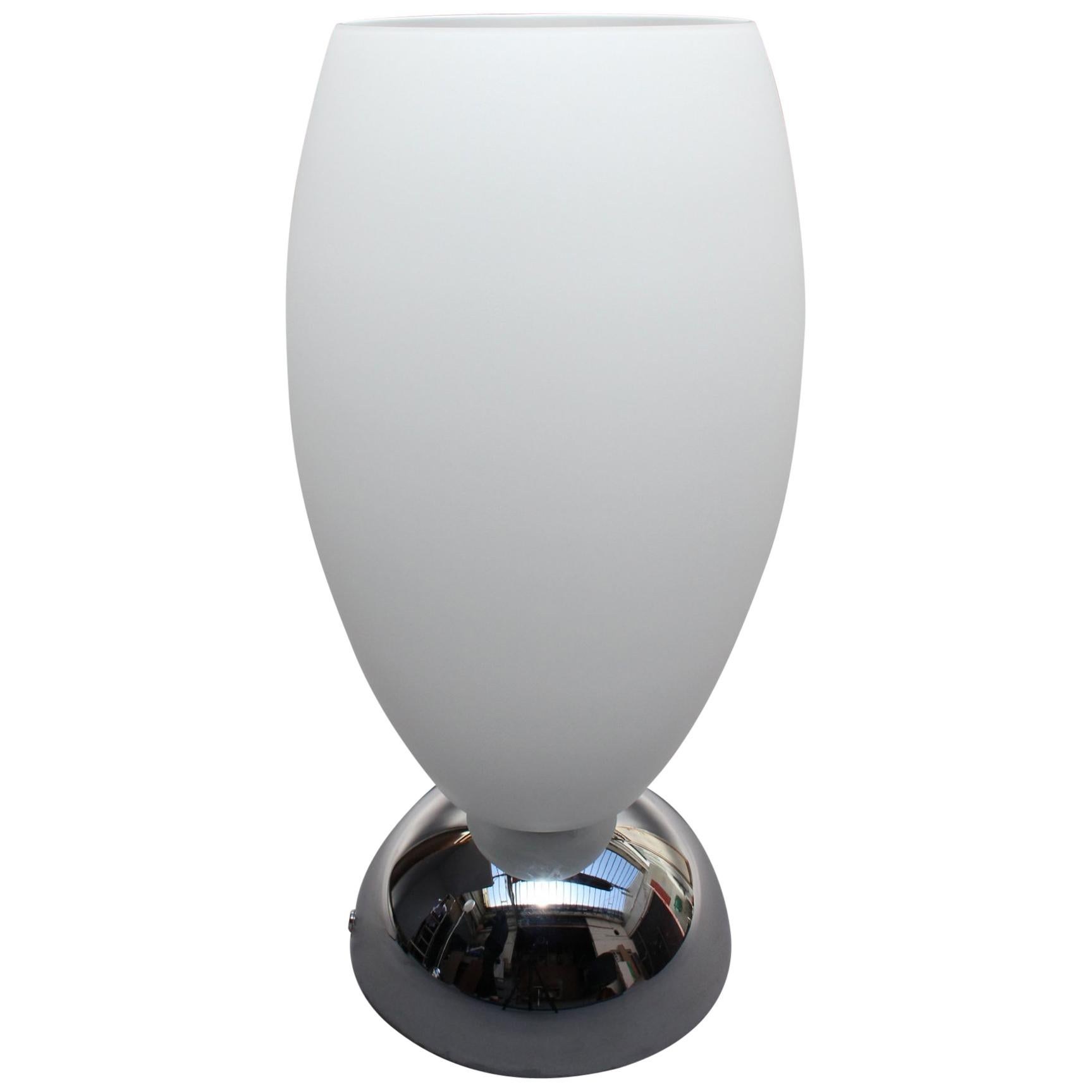 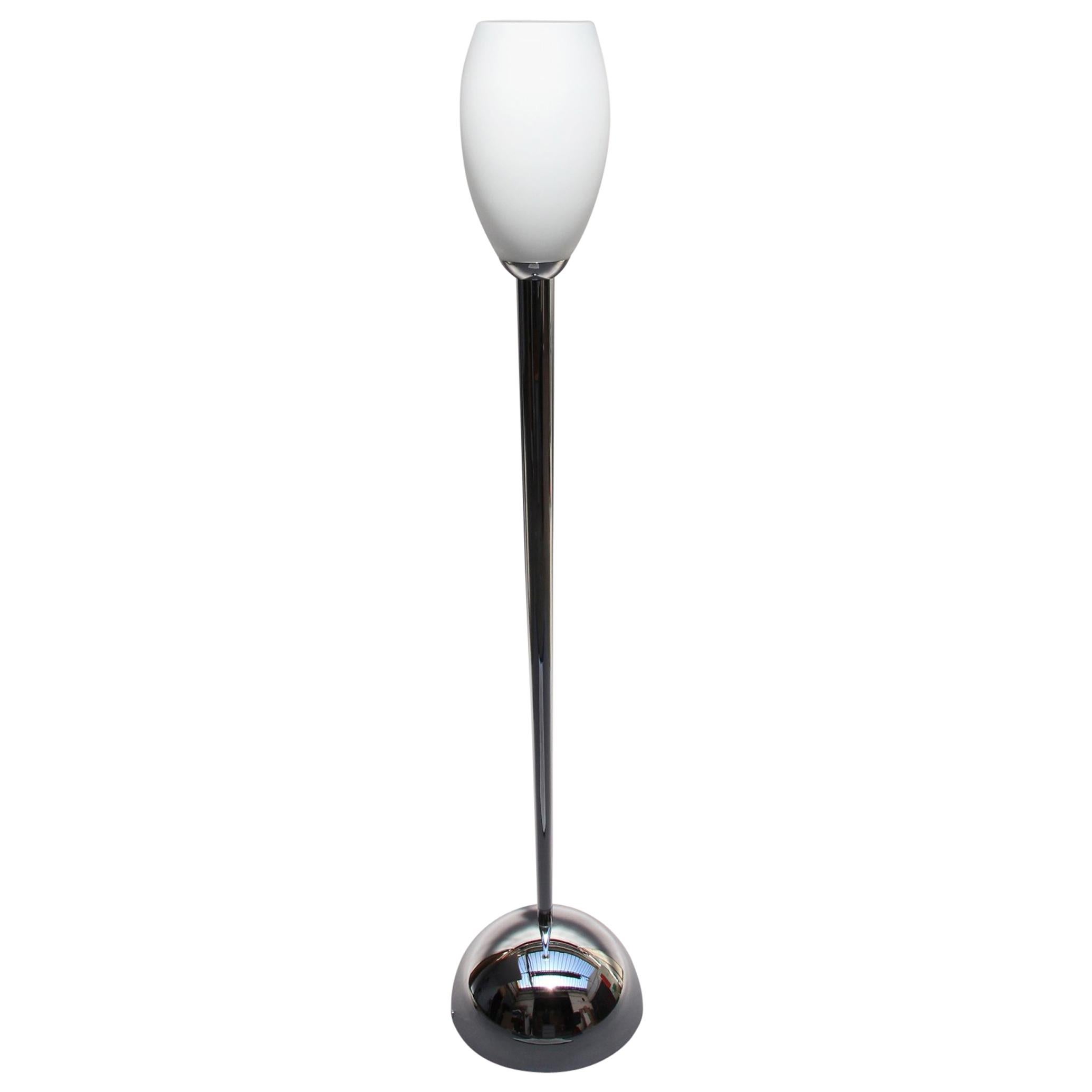 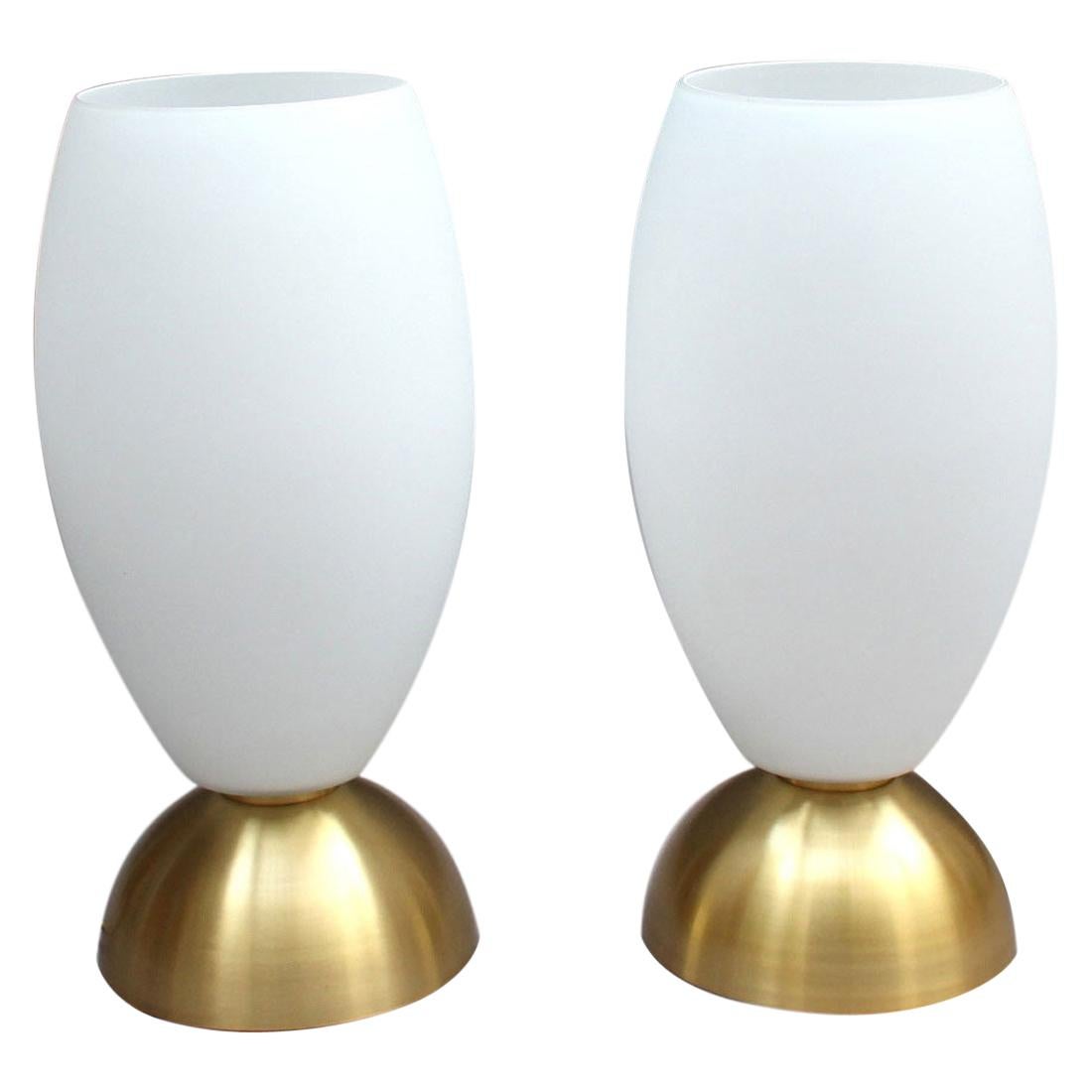 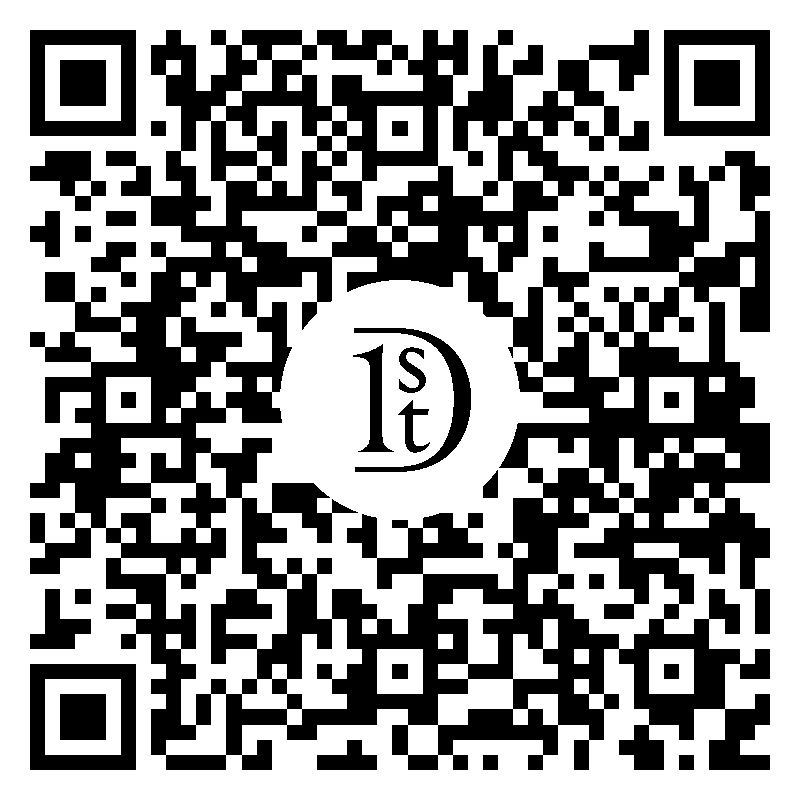 Art Deco Lamp by Jean Perzel, French, circa 1930's. The shade has an ingenious rotating metal diffuser, which allows you to focus the light where you want it. Signed on the base with impressed signature. 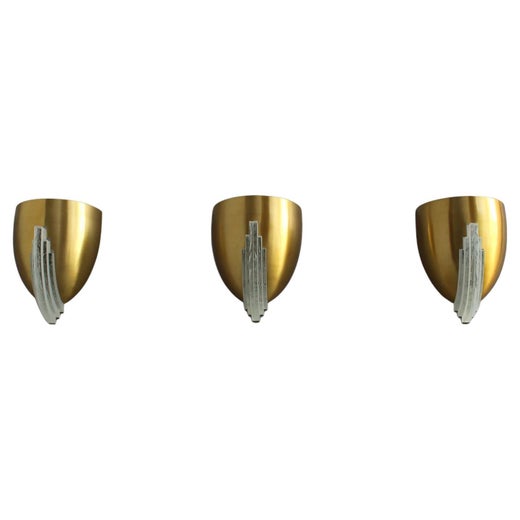 The graceful and stylish modern furniture designed by Jean Perzel earned him prestigious clients all over the world, including the Rothschilds and Henry Ford. His sleek Art Deco lighting fixtures are masterpieces of design, and his work has graced the homes of the kings of Morocco and Siam, and the French presidents Charles De Gaulle and Georges Pompidou. Vintage Perzel tables, floor lamps and other furnishings elegantly accentuate and complement — but never overpower — the architecture of their environment.

Perzel was born in Germany. His father and grandfather were glassmakers, and Jean learned to love the craft just as they did. He apprenticed with stained glass artist Franz Xaver Zettler in Munich and left his native country at a young age to travel around Europe. While traveling, he took jobs in various workshops and made his way to Paris around 1910. There he worked for a master glassmaker and was sent to their Algiers factory, where he supervised the production of the company’s more important commissions.

After serving in the Foreign Legion during the first World War, Perzel became a French citizen. He returned to glass painting in 1919 and became a stained glass artist in the workshop of revered Art Nouveau furniture designer Jacques Gruber.

Perzel eventually became fascinated with the burgeoning lighting industry’s then-new technology. He explored how illumination worked in big spaces such as the era’s stately cathedrals and bustling transit hubs and began to concentrate on designing elegant electric fixtures that offered diffused light in a uniform way.

Perzel opened his atelier in Paris in 1923 and produced decorative wall lights and sconces, chandeliers, floor and table lamps, and ceiling lights. He worked with frosted or sandblasted glass and colored enamels to design functional, geometrically rich fixtures that transformed an interior. Perzel’s work was included in the the International Exhibition of Modern Decorative and Industrial Arts — the exhibition credited with having widely publicized the Art Deco style — and he drew the attention of American industrialist Henry Ford, who commissioned him to design lamps, clocks and other objects that incorporated Ford auto parts. Perzel’s commission would help commemorate the production of 25 million Ford vehicles in Michigan. This cemented Perzel’s reputation as a prestigious lighting designer and manufacturer, and he was tasked with the production of headlights for Ford cars. The Ford-Perzel relationship endured for decades.

Perzel is renowned for designing the lighting for the Luxembourg Cathedral, the League of Nations in Geneva and the Canadian embassy in the Hague. He also collaborated with some of history’s most celebrated architects and designers, including Jules Leleu, Le Corbusier and Michel Roux-Spitz.

About the Seller
4.7
Located in Atlanta, GA
Vetted Seller
These experienced sellers undergo a comprehensive evaluation by our team of in-house experts.
Established in 1996
1stDibs seller since 2009
1,861 sales on 1stDibs
Typical response time: 10 hours

$950
Selection of Art Deco Table Lamps
By Rena Rosenthal, Donald Deskey, WMF Württembergische Metallwarenfabrik
Located in Atlanta, GA
Selection of Art Deco Table Lamps, circa 1930's. From left to right, they are: 1) Graphic enamel and silver plated metal lamp, by WMF, Germany, circa 1930's. Signed underneath. It me...
Category

$3,000
Fine and Unusual French Art Deco Reading Floor Lamp by Jean Perzel
By Atelier Jean Perzel
Located in Long Island City, NY
With a bronze leg and a pivoting ivory lacquered arm that support a brass and glass shade. Perfect next to a sofa or a writing table (the hole in the base was designed to put a table...
Category