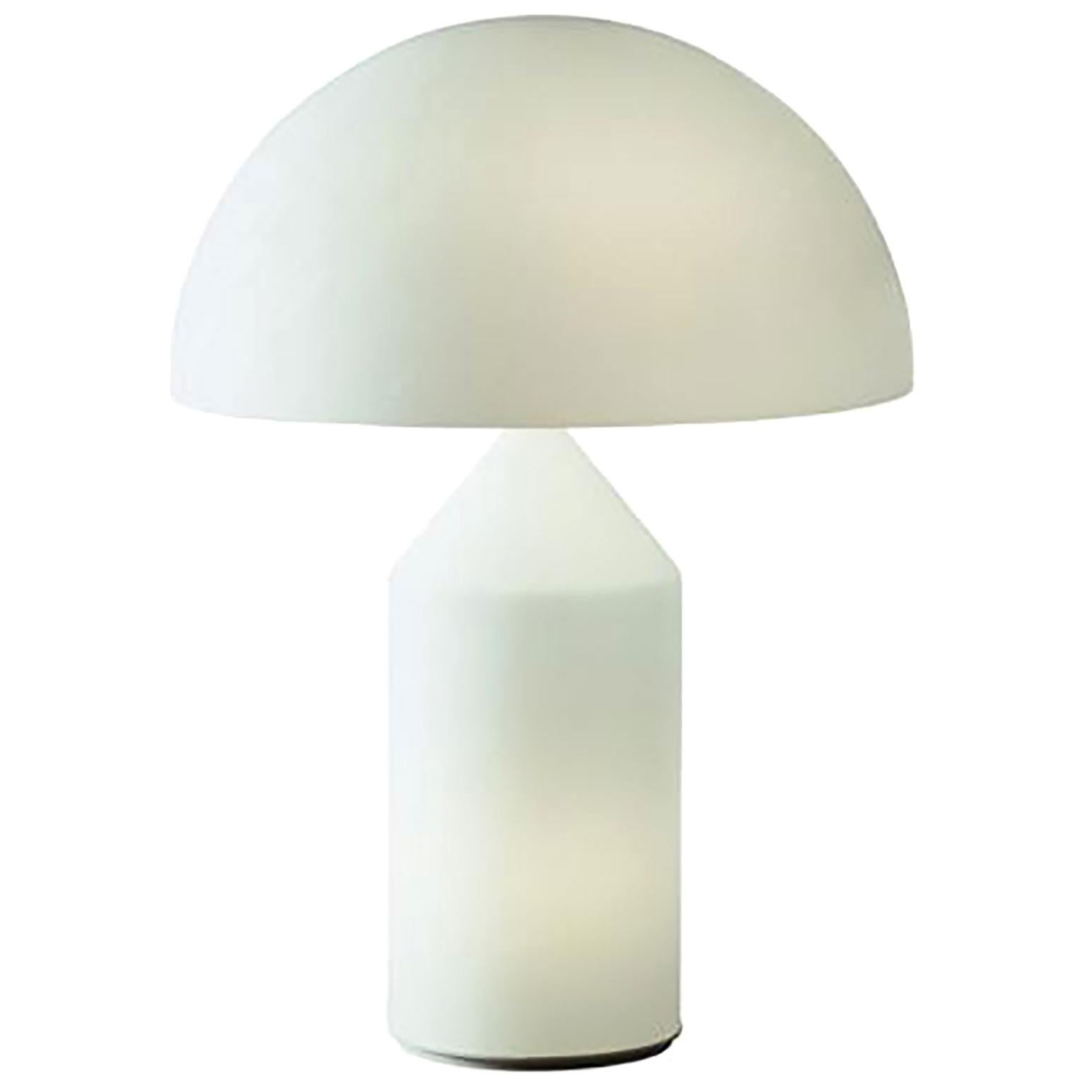 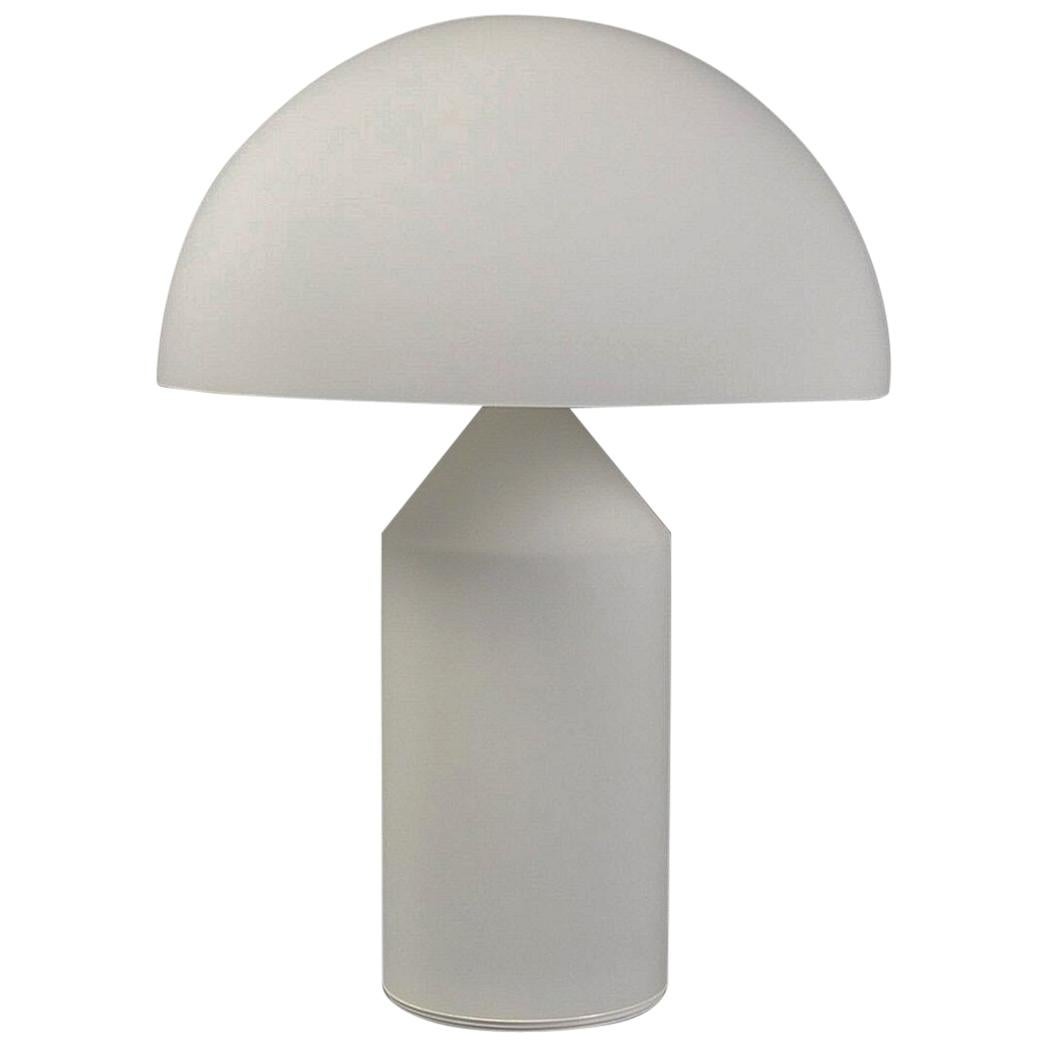 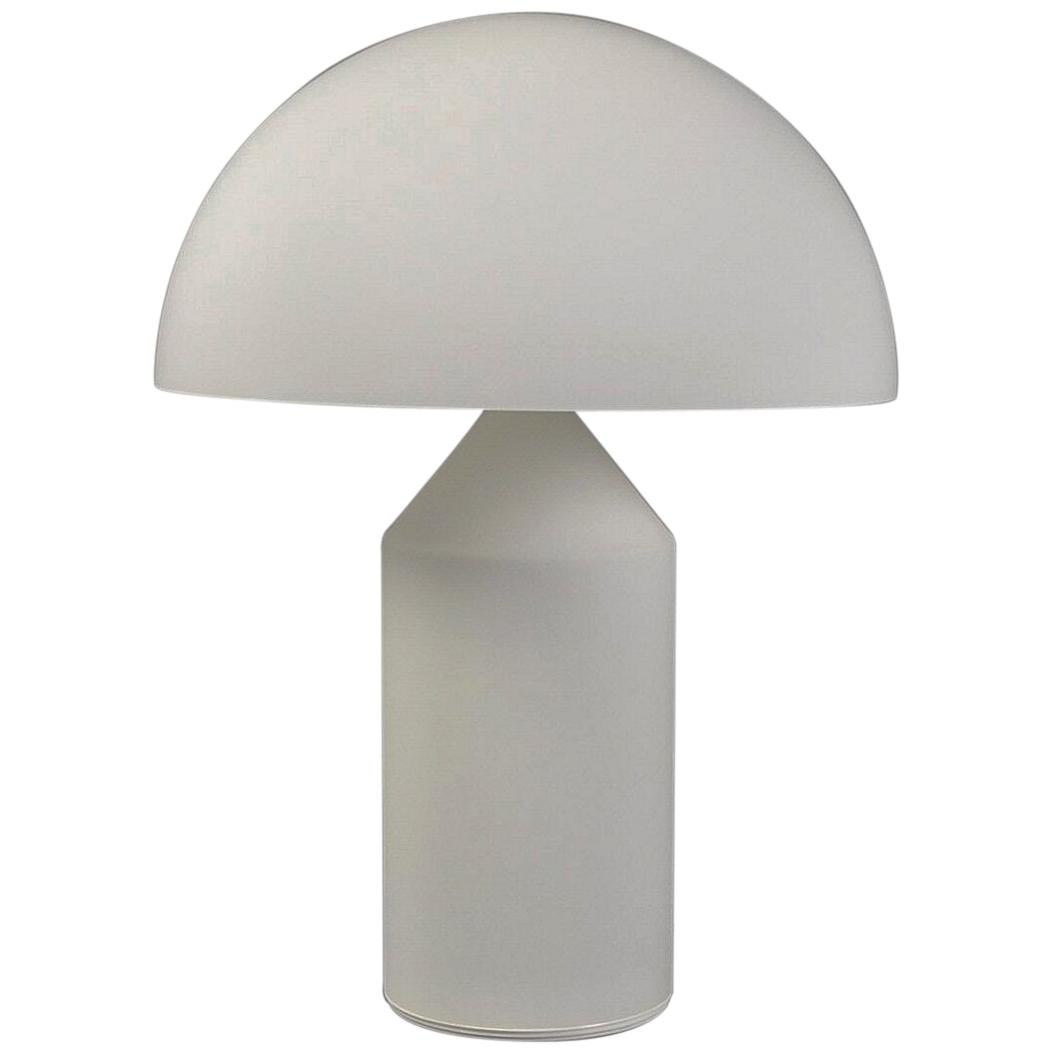 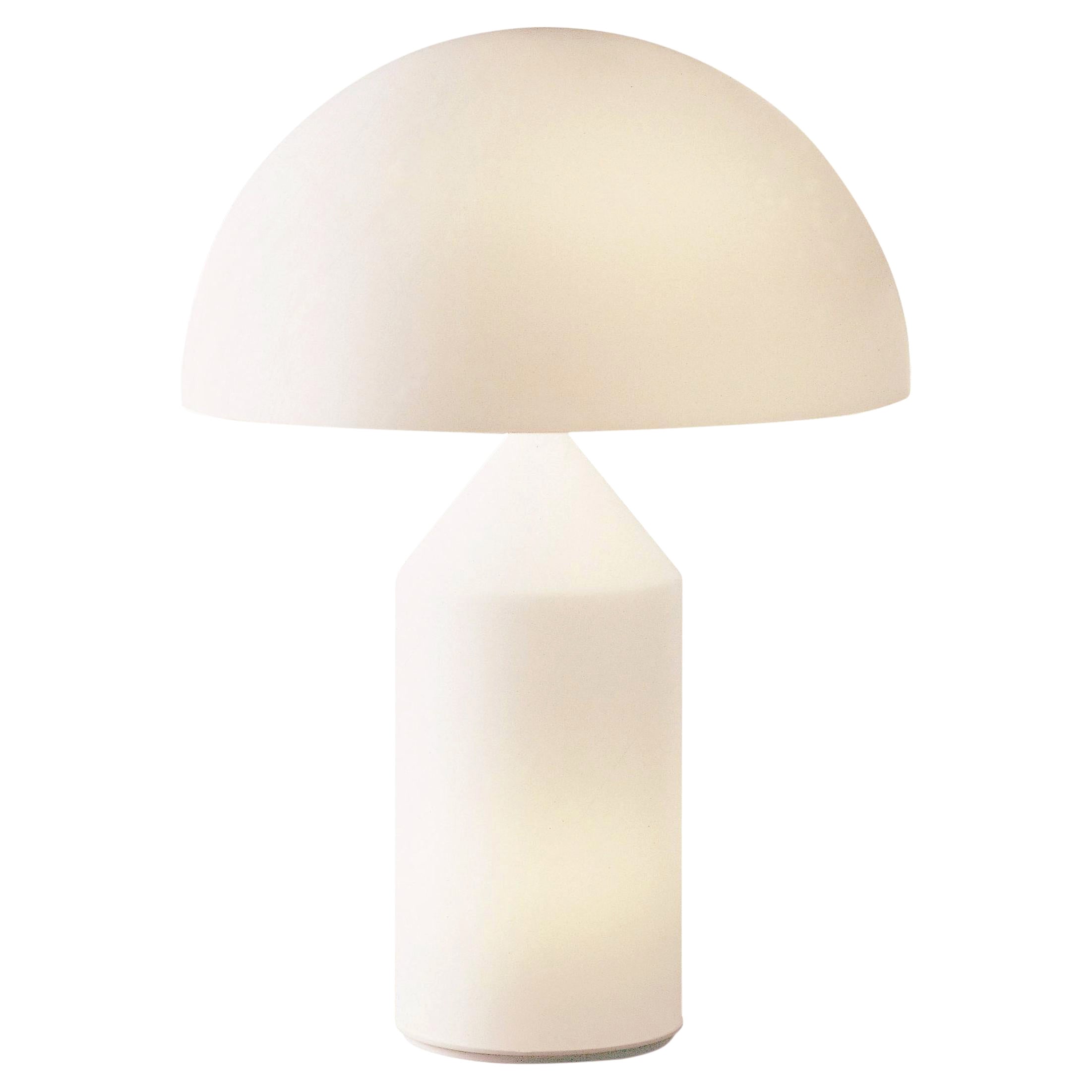 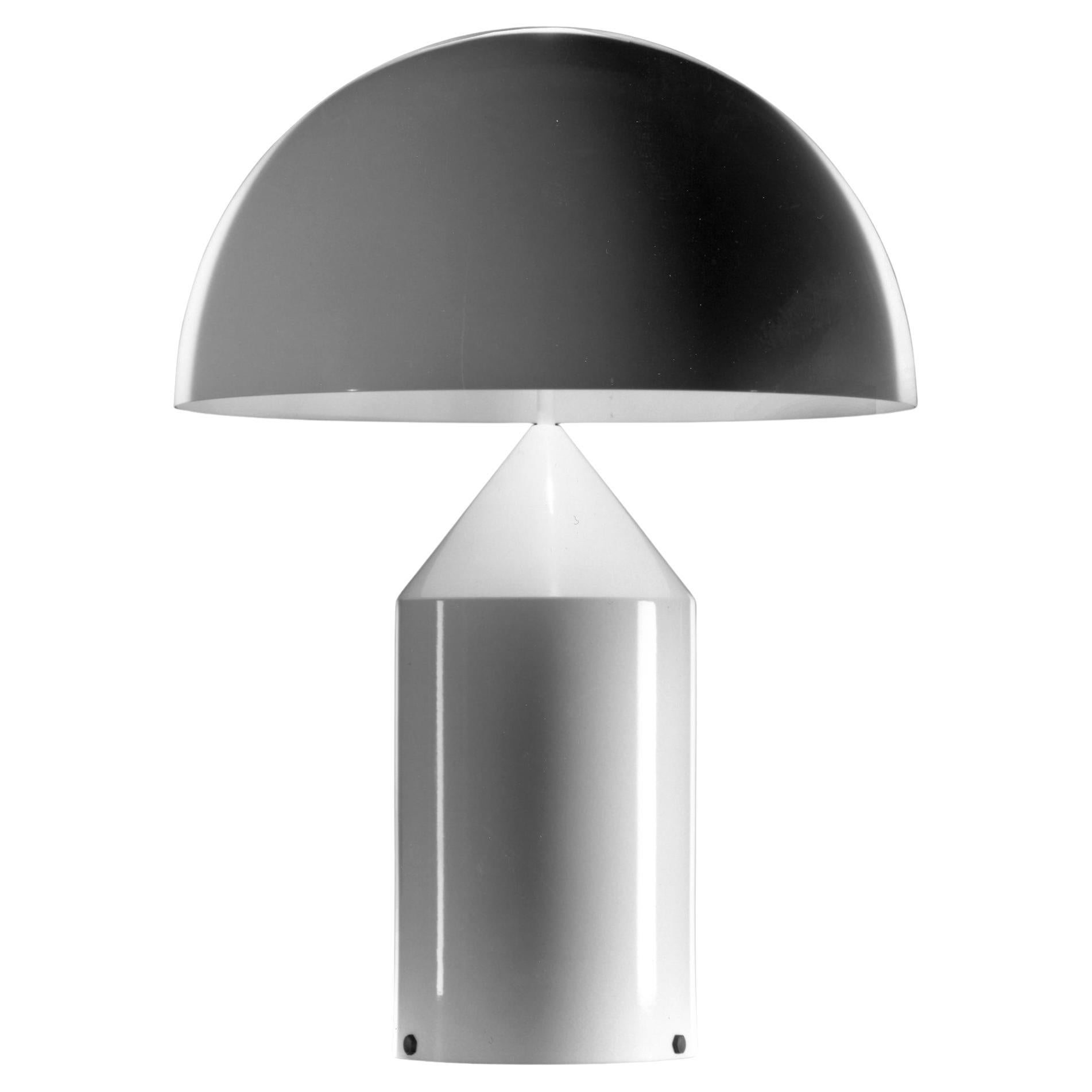 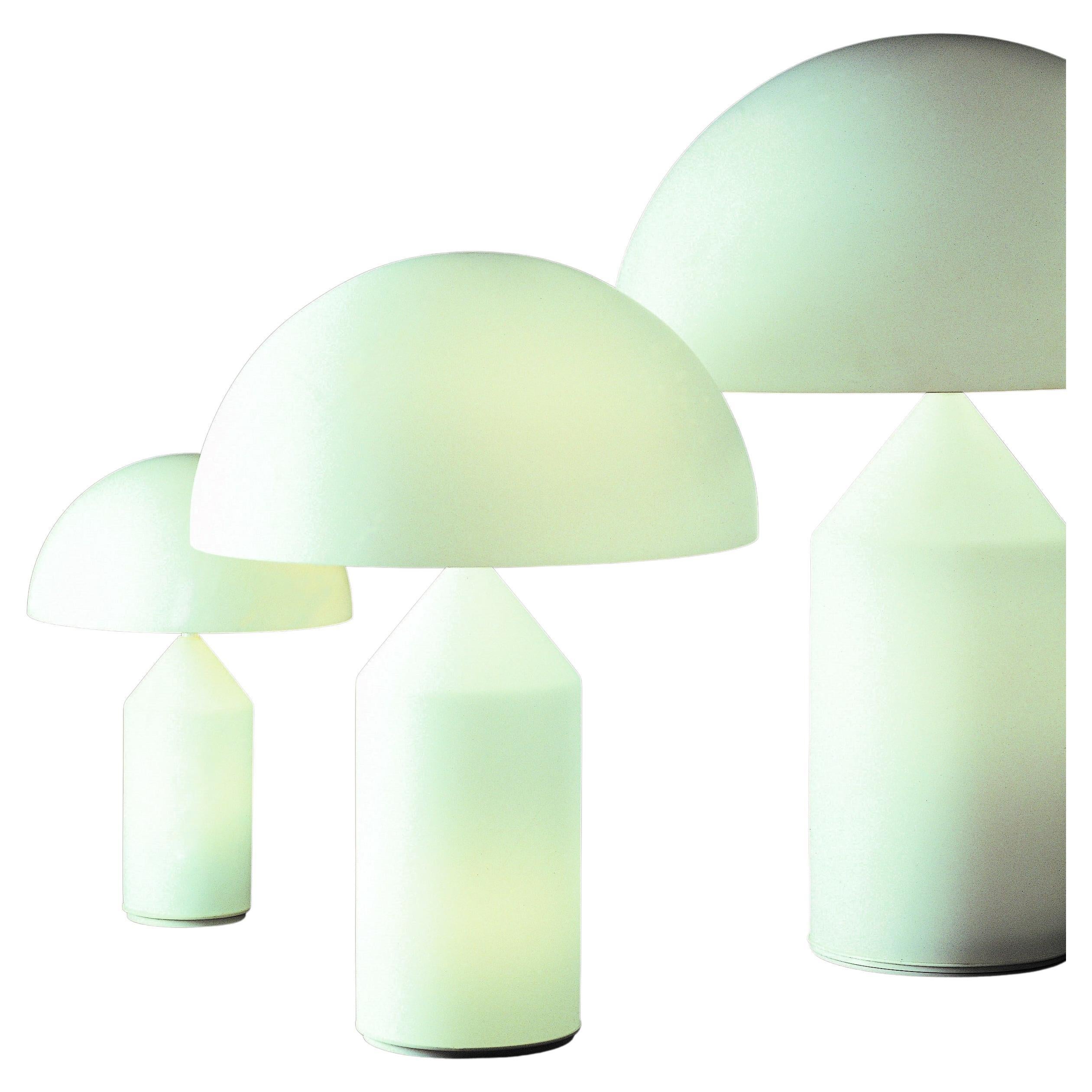 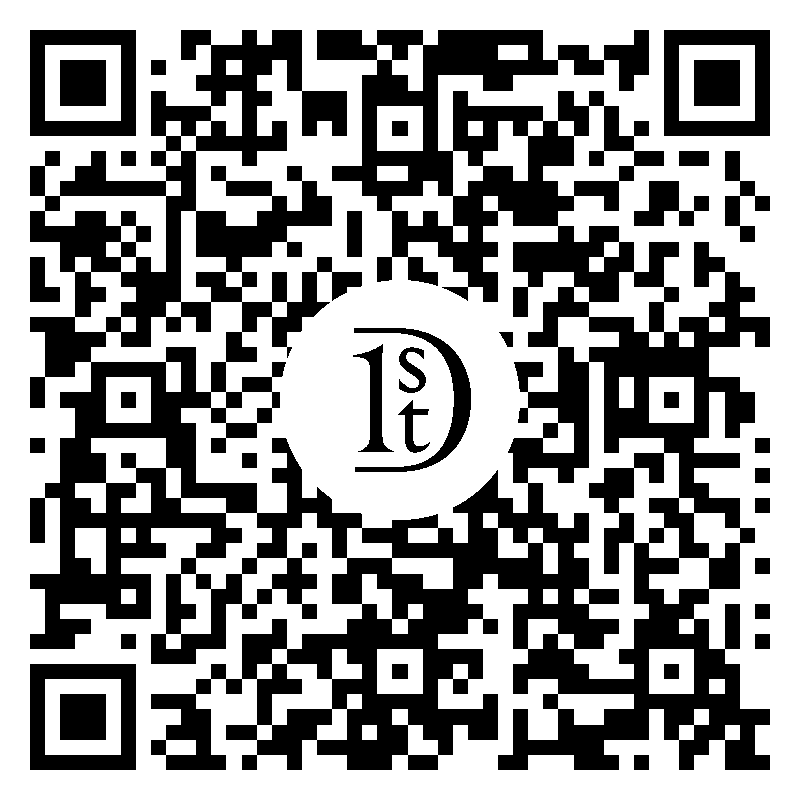 The Atollo Table Lamp (1977) is distinguished by its minimal geometric construction. The worldwide imitated and yet inimitable lamp won numerous awards, and it can also be found as a permanent exhibit in many museums around the world. The series made of blown Murano glass is particularly light. The lights have two light sources: in the base and in the shade. The screen, which is supported on a ball joint, can be tilted in all directions. In the medium, the light is not dimmable. The lamp is new in original box. Delivery time is 4 - 7 weeks and depends on the ordered quantity.

Designed by Vico Magistretti
For such a revered piece of lighting design, the Atollo lamp is impressively simple, comprising just three forms: a cylinder, a cone and a dome, stacked so neatly atop one another that the dome appears to hover above the fixture on its own. This sculptural table lamp, an outwardly geometric tour de force from postwar Italy that produces warm diffused light, was created by prolific industrial designer and architect Vico Magistretti (1920–2006). Born in Milan to a family of architects — both his father and grandfather worked in the profession — Magistretti studied architecture in both his hometown at the Polytechnic University of Milan and at the Champ Universitaire Italien in Lausanne, Switzerland, as a young man during World War II. In Switzerland, he met architect Ernesto Nathan Rogers, who served as his mentor and role model. The younger designer was deeply moved by Rogers’s humanist ideals to revitalize a postwar Italy: The two would later work together on the urban planning of a number of working-class neighborhoods in Milan with Rogers’s firm BBPR. Magistretti also participated in the creation of QT8, an experimental neighborhood in Milan conceived at the Milan Triennial, for which he designed a church. After he graduated from Polytechnic in 1945, Magistretti worked at his father’s practice, and it wasn’t until the 1950s that he recognized his interest in furniture design. (He would return to architecture and urban design projects in the ’80s and ’90s.) He collaborated with Cesare Cassina for more than 30 years, designing for Cassina’s eponymous firm the successful Carimate chair and the Maralunga sofa as well as Cassina’s villas in the commune of Carimate. Magistretti also found a successful partner in Artemide, for whom he designed the Eclisse lamp, which won the 1967 Compasso d’Oro. In 1979, Magistretti would win another Compasso d’Oro award for his Atollo table lamp, perhaps his most enduring work. The decorative and versatile Atollo — which was available in three sizes, in milky white opal glass as well as aluminum — was designed in 1977 and produced by Oluce, where it is also manufactured today and offered in multiple finishes. The Atollo table lamp is held in museums such as the Museum of Modern Art in New York and Die Neue Sammlung in Munich. 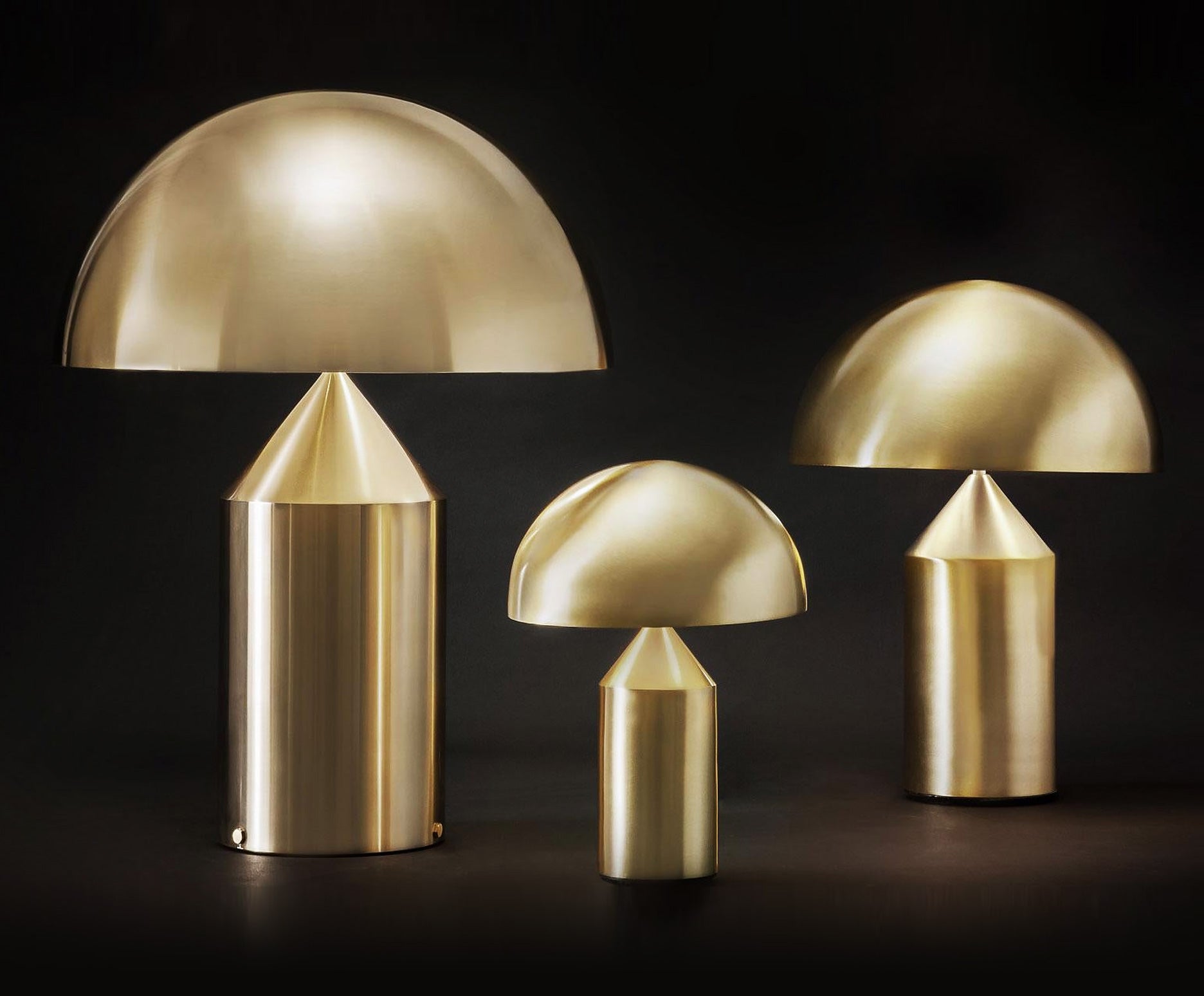 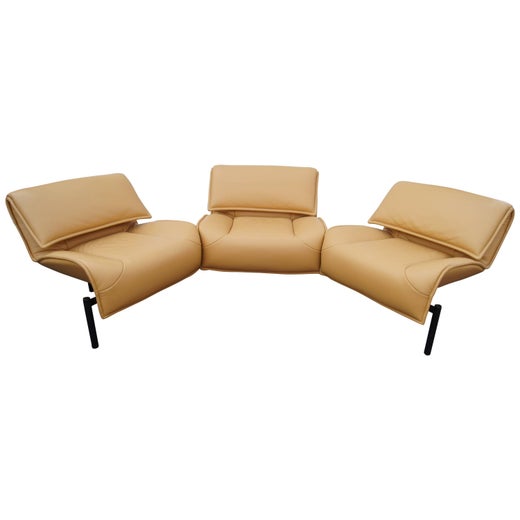 As one of the founding fathers of modern Italian design, prolific architect and industrial designer Ludovico Magistretti (known by his nickname Vico) was guided by his philosophy, “There is no excuse for bad design.” His architectural projects are widely revered, and an ingenious meld of form and function can be found in his stylish and deceptively simple table lamps, sofas, armchairs and other mid-century furnishings.

Born in Milan, Magistretti followed in the footsteps of his father and grandfather (both architects) to study architecture at the Polytechnic University of Milan. At the outbreak of World War II, he fled to Switzerland, and it was there he met his role model and mentor, renowned humanist architect Ernesto Nathan Rogers. Magistretti was inspired by Rogers’s vision to revive postwar Italy, and they collaborated on several reconstruction projects. Among Magistretti’s first architectural designs is a “poetic” round church, which he created for the QT8, an experimental Milanese neighborhood.

When Magistretti returned to Milan in 1945, he worked at his father’s architectural firm. It wasn’t until the early 1950s that he expanded his talents into design while working with furniture artisans.

In the 1960s, Magistretti began his 30-year working relationship with famed entrepreneur Cesare Cassina of the Cassina furniture manufacturing company. In their design approach, the two men shared a vision of the relationship between modernity and tradition and enjoyed a close bond (Magistretti designed Cassina’s luxurious villa in 1965). However, their friendship was not without contention.

Legend has it that upon seeing the prototype for Magistretti’s Maralunga sofa, Cassina hated it so much that he punched it, breaking the back of the sofa, which crumpled into itself.

“Right, great, it looks perfect to me like that,” an unfazed Magistretti allegedly responded, and the Maralunga’s slumped, adjustable-height backrest was born. Incidentally, the Maralunga sofa won Italy’s Compasso d’Oro award as did his Eclisse lamp for Artemide and his Atollo lamp for Oluce.

Magistretti died in 2006, but his designs live on in galleries, museums and private residences and offices around the world.

Find a range of vintage Vico Magistretti furniture and lighting on 1stDibs.

1stDibs Buyer Protection Guaranteed
If your item arrives not as described, we’ll work with you and the seller to make it right. Learn More
About the Seller
4.3
Located in Vienna, Austria
Vetted Seller
These experienced sellers undergo a comprehensive evaluation by our team of in-house experts.
Established in 2013
1stDibs seller since 2015
1,186 sales on 1stDibs
Typical response time: 1 hour
More From This SellerView All
People Also Browsed
You May Also Like