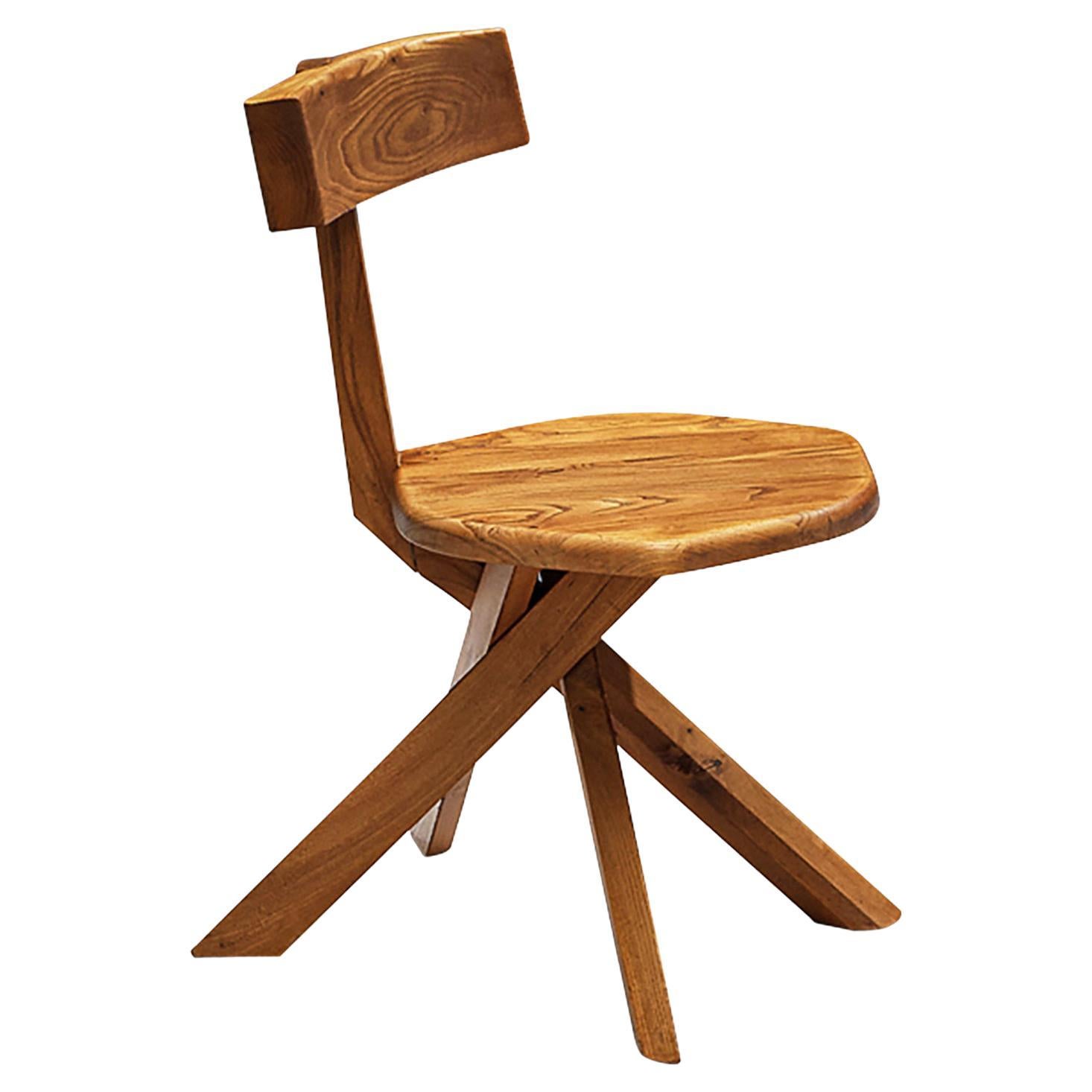 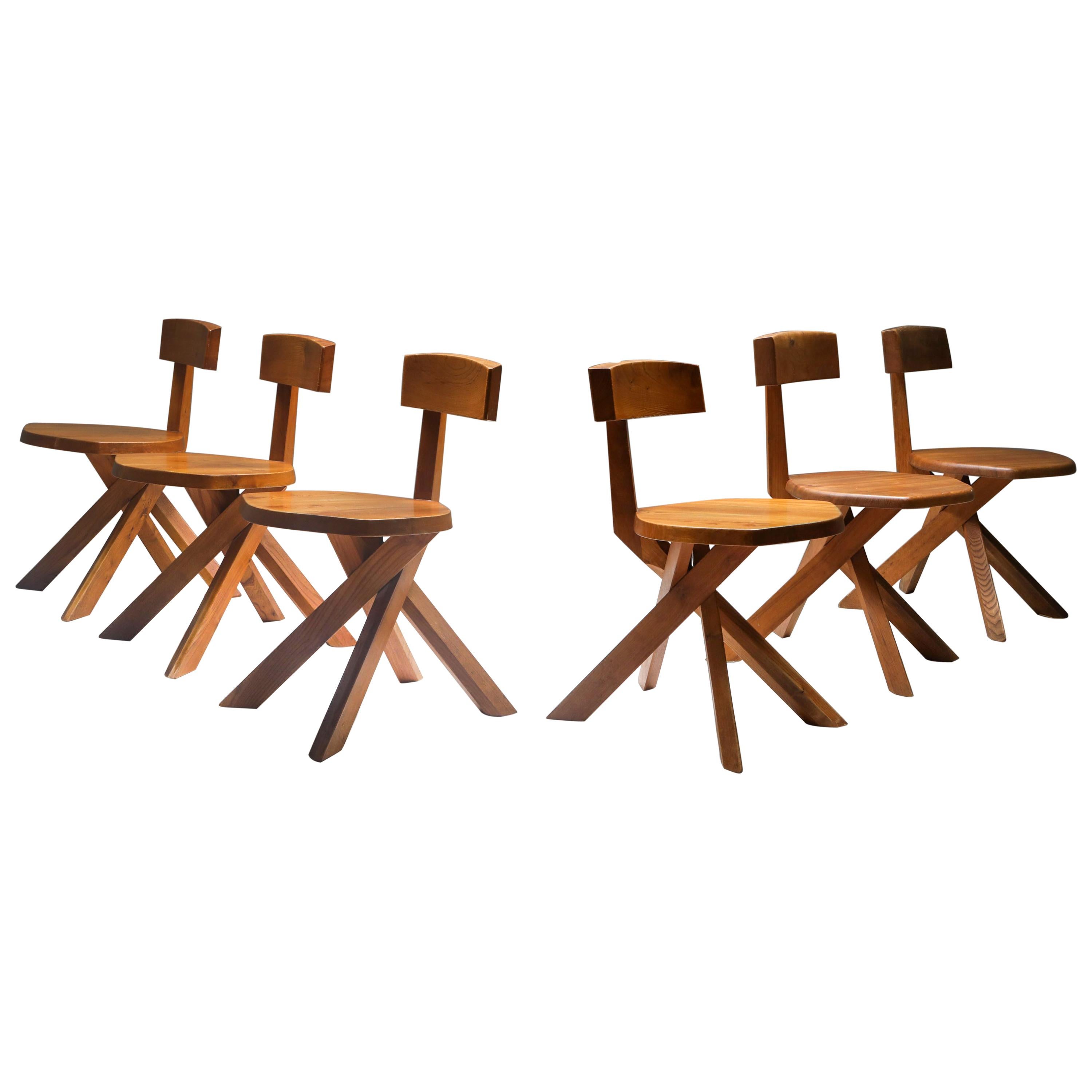 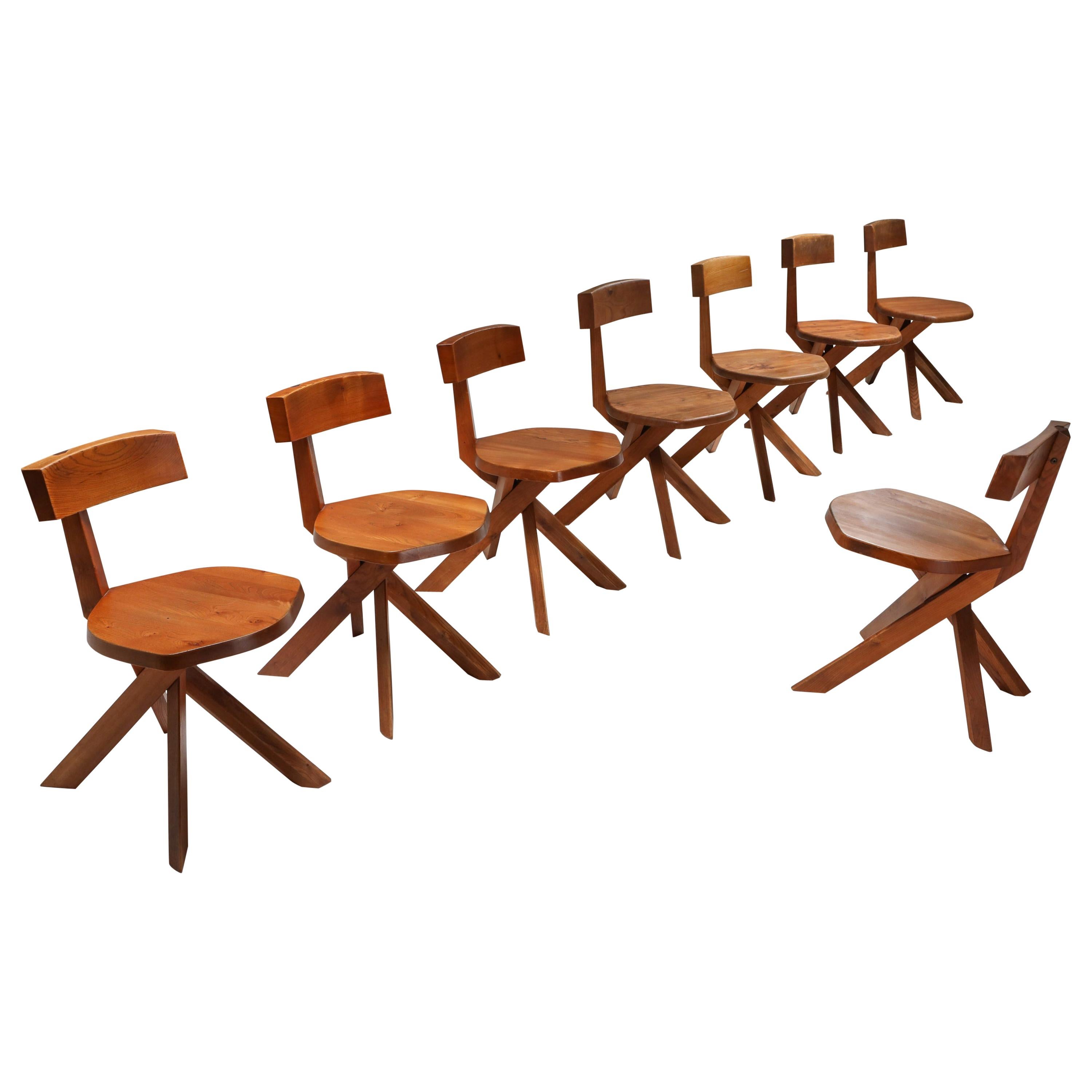 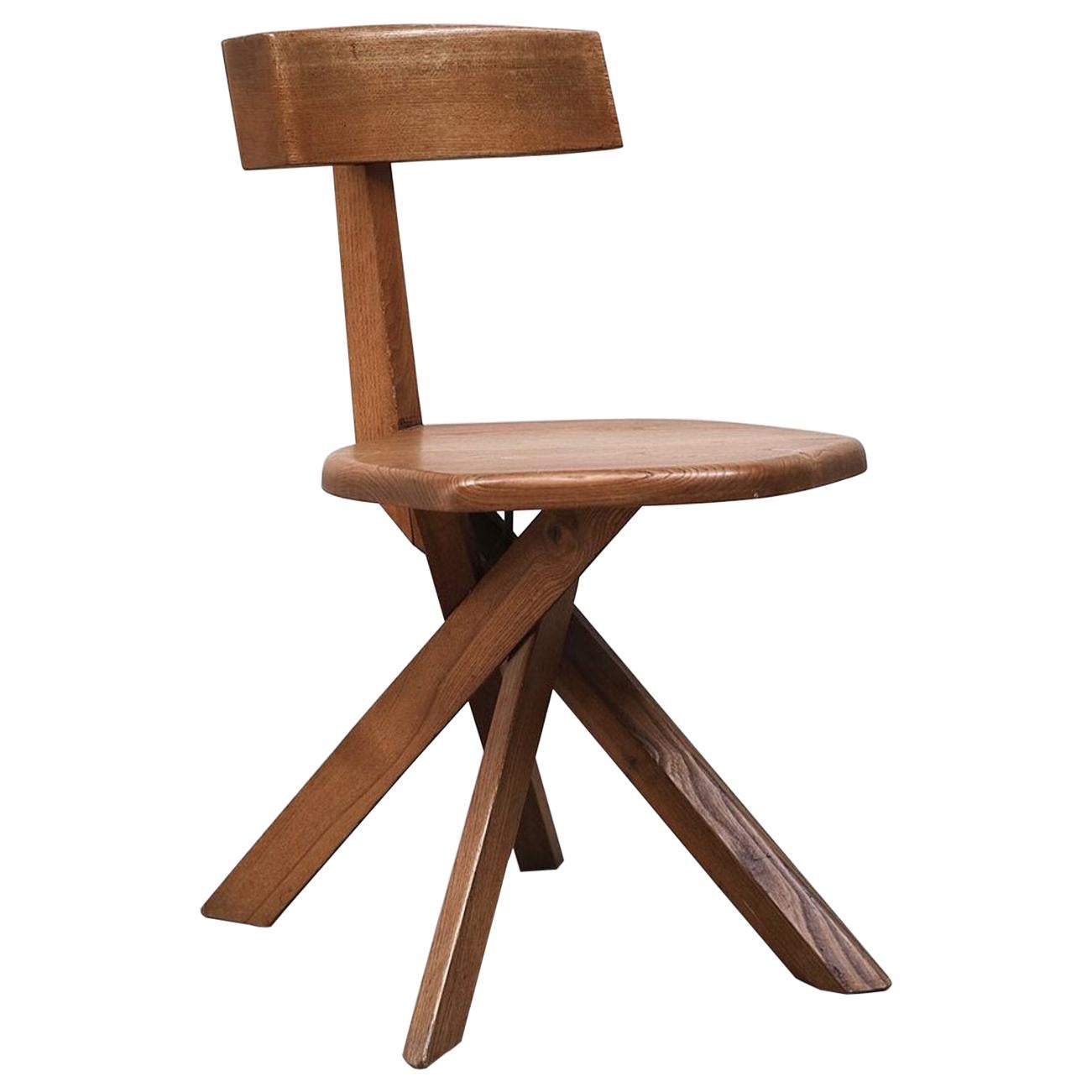 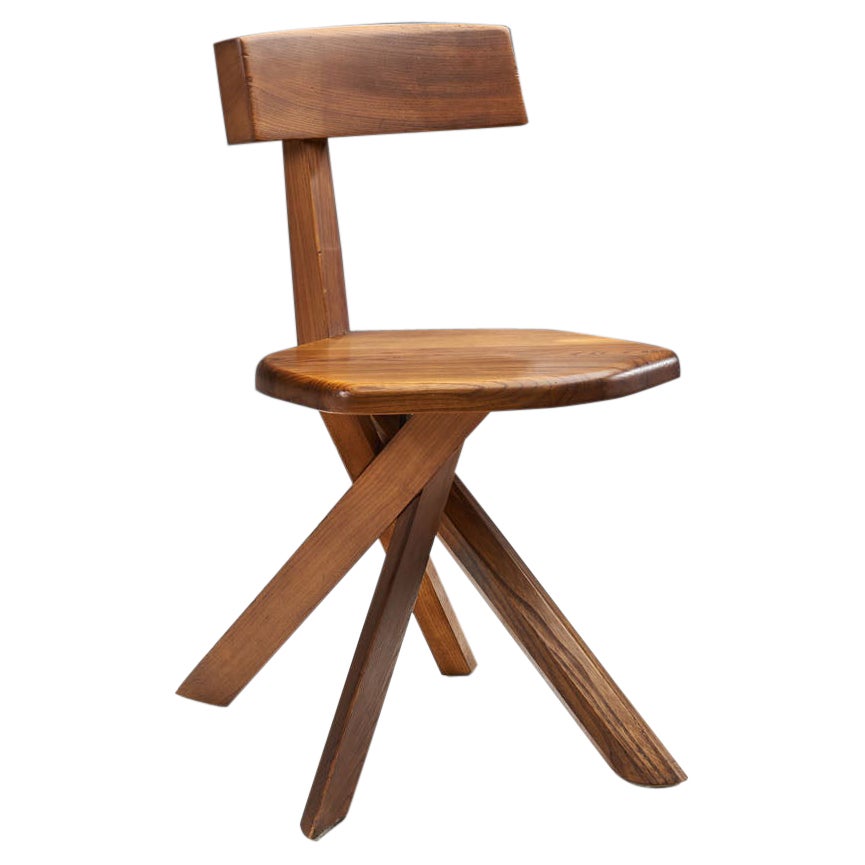 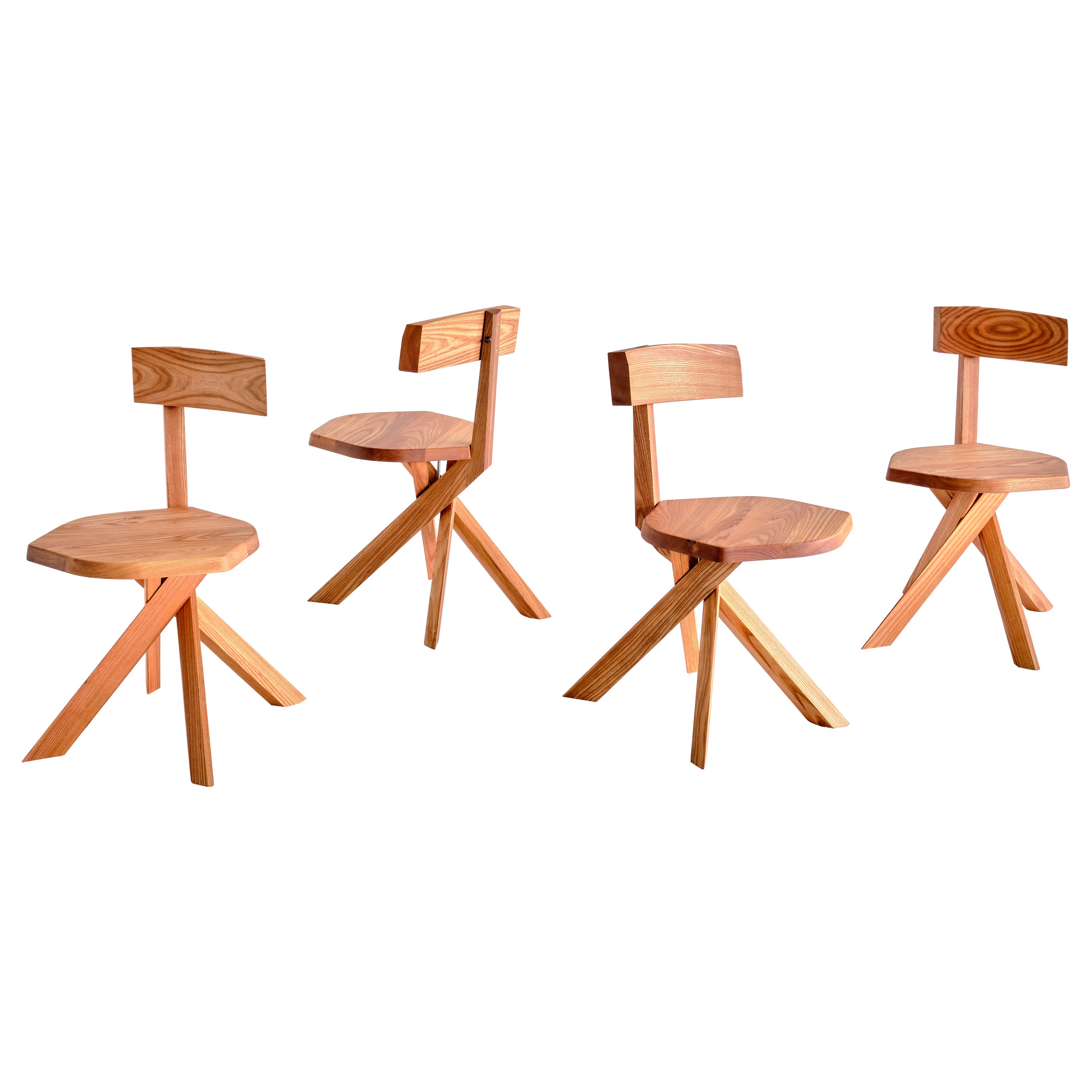 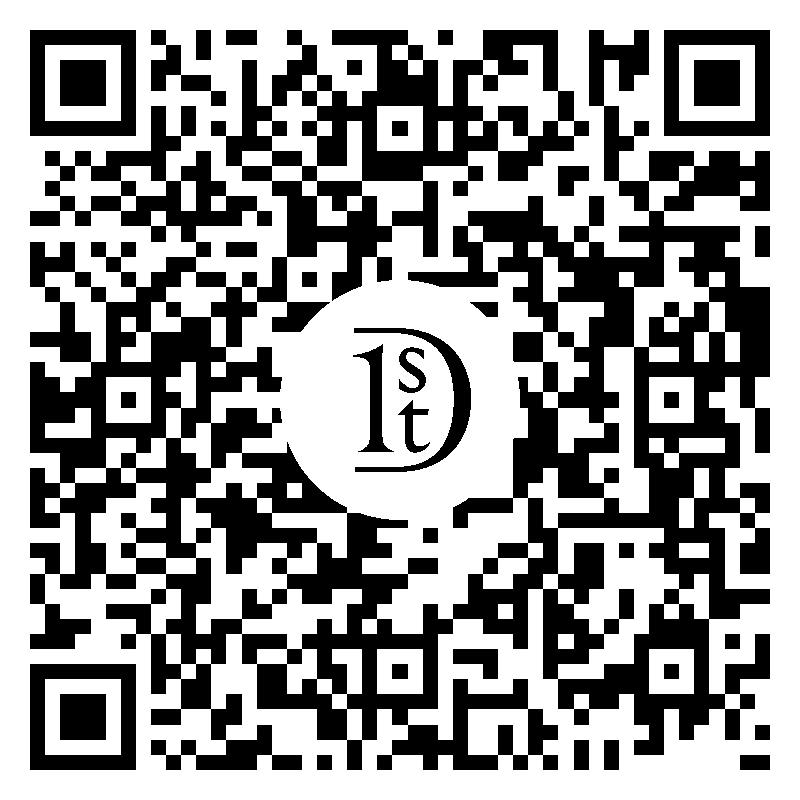 Pierre Chapo, dining chairs model 'S34', elm, France, 1960s These asymmetrical chairs with a twisted base are true icons of Pierre Chapo's playful and solemn designs. The backrest is placed just slightly out of the middle which strengthens the design. These chairs are made of solid elm and show the characteristics of Pierre Chapo. First of all, the material is typical for Chapo who preferred to use wood and above all elmwood. The second element is the cross-legged base which is one of Chapo’s traits. Stunning wood joints are mostly visible at the back of the chairs. Pierre Chapo (1927-1987) was born in a family of craftsmen and trained as an architect at the École Nationale Supérieure des Beaux-Arts in Paris. Already from a young age, he felt the need to roam the world. He was only 21 when he left France in order to spend the next few years traveling through England and Scandinavia. In December of 1951, he was living back in Paris, where he met his future wife, Nicole. Their meeting was the beginning of a lifelong union. Together, the lovebirds travelled through South and North America being captivated by the architectural diversity. Back in France, he and his partner Nicole set up Société Chapo in 1957. Société Chapo was a design workshop and gallery in one where he showed his own creations. However, Nicole also presented her ceramics, textiles here and they even exhibited other great designers of that period. In 1958, they opened their famous gallery at 14 Boulevard de l'Hopital. Chapo's work originated by means of special commissions that could later be adapted to universal needs. Throughout his career, Chapo combined his interest for contemporary design with his love for traditional craftmanship. In his designs, he was inspired by Frank Lloyd Wright's balanced lines, Corbusier's research on proportions and the ideas of Bauhaus. The three principles that motivated Pierre Chapo were 'material, form, and function.' He measured his furniture by means of golden ratio and used elmwood as his preferred material. Unfortunately, Chapo fell ill, and he died in 1987, however, until his last day, he kept on designing and working.

Recognized Seller
These prestigious sellers are industry leaders and represent the highest echelon for item quality and design.
Diamond Seller
These expertly vetted sellers are 1stDibs' most experienced sellers and are rated highest by our customers.
Established in 2006
1stDibs seller since 2012
3,756 sales on 1stDibs
Typical response time: 1 hour
Associations
20th Century Specialists
More From This Seller