The authentic Biedermeier furniture on 1stDibs is representative of the first modern European decorative style not dictated by the tastes of the aristocracy. Following the Napoleonic wars, a growing, wealthy urban middle class in the German-speaking states of Central Europe began to demand rights and privileges once granted only to nobles. To avoid trouble, the upwardly striving confined their political discussions to one another’s homes. And so the salon was born.

Cabinetmakers in cities such as Vienna, Berlin and Mainz began to offer goods that reflected the tastes and needs of the new class. The makers of Biedermeier chairs, tables and other furniture used little or no gilding, silver hardware or other lavish ornament. Ebonized trims are common on Biedermeier cabinetry, and neoclassical elements — lyre-shaped chair splats, carved scrollwork, table supports shaped like Greek columns. But the strongest aesthetic statement came from the wood — richly-grained, honey-colored, often book-matched veneers of walnut and fruitwood.

There are two iconic Biedermeier furniture forms, both made to outfit rooms designed for conversation. One is the sofa, deeply upholstered with a strong, architectural wooden frame. The second is the circular pedestal table, which stood at the center of the room, offering a surface on which to place coffee and cake services; or to roll out a map, or sketch out ideas on paper.

“Biedermeier” was originally a derogatory term — it derives from the pen names of two German magazine writers who mocked bourgeois manners. Looking at the elegant and refined antique, new and vintage Biedermeier furniture offered on 1stDibs, that is now an amusing irony.

Table from around 1900, after Renovation 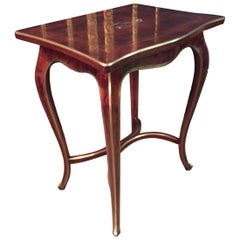 Antique Swedish Satin Birch Coffee / Library Table
Located in London, GB
A stunning antique low table, made in Sweden and dating from around the 1920-30’s. This is of amazing quality and beautifully designed, as is common for Swedish furniture. It is a...
Category

Biedermeier Round Mahogany and Black Glass Center Table, 1830
By Biedermeier
Located in Rome, IT
Super elegant Biedermeier center table, surprising its beautiful mahogany "patina" and its supreme style. The center table has a round shape and is all veneered in mahogany wood, ex...
Category

Antique Swedish Biedermeier Birch and Ebony Coffee Table
Located in London, GB
A stunning antique coffee / occasional table, this was made in Sweden and dates from around the 1840s period. It is beautifully made from burr birch and ebonised solid wood. The s...
Category

Biedermeir Coffee Table or Writing Desk in Mahogany, Denmark
Located in Prato, Tuscany
Danish coffee table (or desk) in light mahogany; the top, well proportioned and made more harmonious by rounded corners, is supported by two elegant and solid supports in the shape o...
Category

19th Century Oval Biedermeier Table
Located in Opole, PL
We present you a mahogany table from the late 19th century in the Biedermeier style. This piece of furniture has undergone renovation.
Category

Biedermeier Style Work Table in Pine, circa 1900
Located in Miami, FL
North German Biedermeier style work table in pine. Perfect as a writing table, a lamp table, nightstand or even as an work table in the kitchen. Could also be reduced to coffee table...
Category 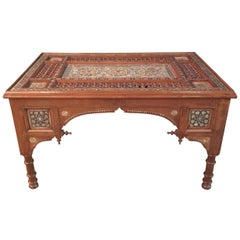 Mahogany Secretary in the Biedermeier Style

H 28.55 in. Dm 32.09 in.
19th Century Biedermeier Coffee Table
Located in Opole, PL
We present you a small, round coffee table of simple forms, which are typical for the Biedermeier style. The base is in the shape of a triangular platform with concave sides – three...
Category

H 26.38 in. W 27.17 in. D 27.17 in.
Biedermerier Round Table in Walnut, Wien, 1810
Located in Albignasego, IT
Round Biedermeier table in walnut and walnut root. The top is veneered in walnut, divided into twelve segments to create suggestive veining games. The central ball-shaped stem is fla...
Category

Biedermerier Round Table in Walnut, Wien, 1810

H 23 in. Dm 38 in.
Biedermeier Table, Three-Legged, Cherry/Elm/Ebony, South Germany, circa 1825
Located in Regensburg, DE
Elegant, round three-legged Biedermeier table. The plate is made with star-shaped cherry veneer. In the middle there is a circle made from elm-roots veneer and surrounded by a ebony ...
Category

H 32 in. Dm 42 in.
Austrian Biedermeier Coffe Table, circa 1820
Located in Berlin, DE
An Austrian early 19th century round Biedermeier coffee table raised on free standing columns with gilded foliate capital and base, on a quadripartite plinth. Walnut veneer on pinewo...
Category