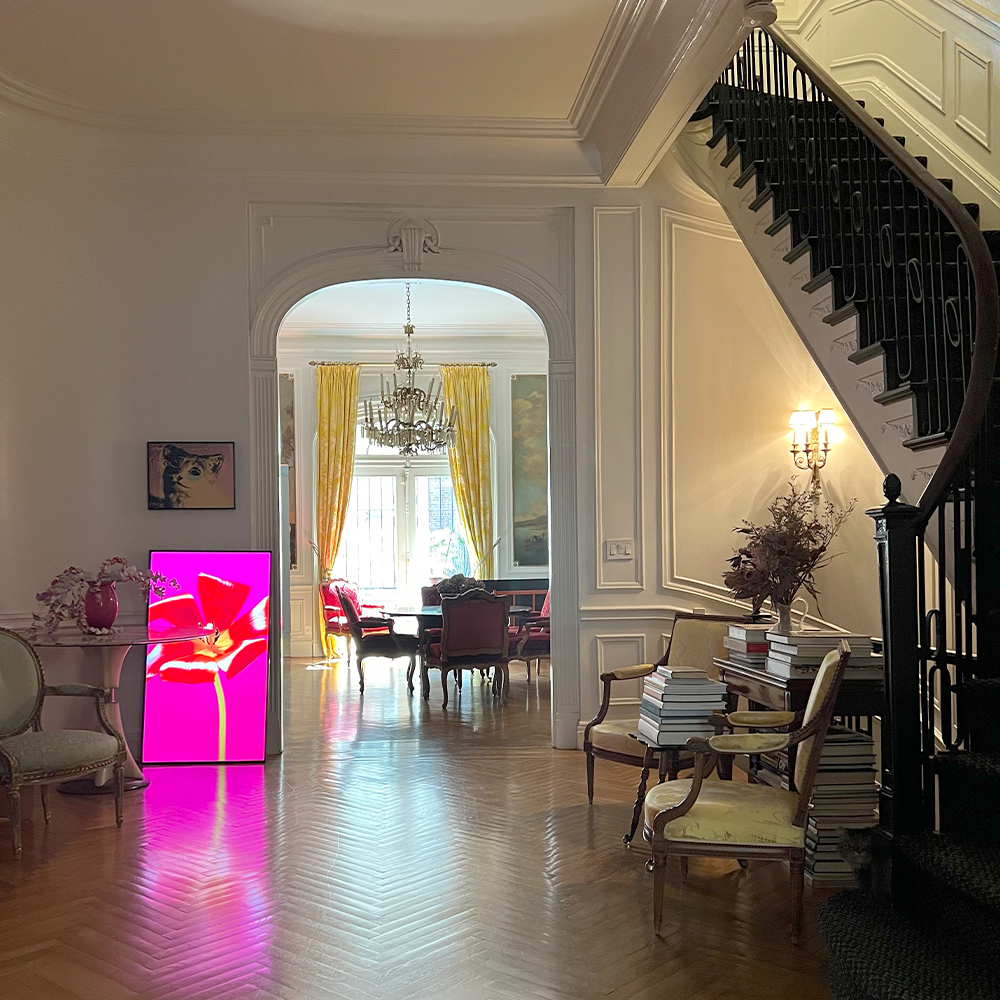 May 29, 2022Computer screens are everywhere in the classical 19th-century Manhattan townhouse of Anna Condo. There are screens for editing films and photographs, screens for researching an artist who has caught her interest and — most recently and excitingly — specialized screens for displaying the NFTs that she herself has photographed and minted.

Glorious and vibrantly colored large-scale still lifes of flowers are housed in self-illuminated digital canvases that casually lean against ornate moldings or within an antique marble fireplace, alongside physical works by big-name artists.

In Condo’s eyes, beauty (rather than pedigree) is all that matters when it comes to her love of art, including the carefully selected works in her home. In fact, she prefers not to describe herself as an art collector. “I am an artist and an art lover,” she says. “You wouldn’t call a writer who has a large library a ‘book collector.’ ”

Born in Soviet-era Armenia, Condo has pursued all sorts of creative fields. She grew up in France and studied art there before moving to New York to take up acting and filmmaking. After writing, producing and directing several well-received shorts and features, she started focusing her trained and informed eye on photography.

That was almost a decade ago. Condo has since become known for what she calls her “floral portraits,” which she started creating in 2013, inspired by Dutch still lifes and Impressionist paintings. Right now, a wall of her flower metal dye-sublimation prints is on display at Maison Gerard, and she’s engaged in several new projects involving NFTs, a natural progression, given her creative curiosity and her subject matter.

Condo collaborated with an anonymous group of crypto punks on “Tulip 1637,” a collection of tulip photographs minted as NFTs that is currently hosted on the OpenSea platform. The series was inspired by the resemblance of the current crypto craze to the tulip mania of the 1600s, when the price of the flowers skyrocketed because of rampant speculation.

“It was a perfect fit,” she says of the marriage between her floral portraits and NFTs. “I think when it’s good art, it doesn’t matter if it’s an installation, if it’s a canvas or if it’s a piece of paper.”

Introspective sat down with Condo to discuss how the brave new world of NFTs caught her eye and interest, what other artwork attracts her and why the flower is her favorite muse.

Although you were always involved in the visual arts as a filmmaker, you are also a photographer. Did your work in that field lead to your interest in the photos you own, like those by Vivian Maier and Diane Arbus?

I have been taking photographs since the early eighties. It started when I was on film sets, and I have been focusing on still-life photography since mid-2013. Arbus and Maier are two of my favorite photographers. I love how personal the work is, and also very different from mine. That is very inspiring.

I became interested in the street photographer Vivian Maier after I heard about how she was a nanny and her photography was only discovered after her death. It’s like a beautiful novel. When I first saw one of her self-portraits, I thought, “There’s something comedic that I really like, with her red hat and overcoat, but also something tragic.”

I recently bought the Diane Arbus photograph of the Gish sisters in Central Park because it spoke to me — I have two daughters, and I used to take them to the park. Also, coming from film as both an actor and a filmmaker, I’ve always been fascinated by Lillian Gish and found her inspiring, talented and beautiful. It’s like a big poem, to New York, to film, to photography, to sisterhood, fashion, all of it.

Is there any thread unifying the art you have in your home?

I am drawn to beauty, lush or minimal. I like very different styles. I love a lot of art by women. I also have a great self-portrait drawing by Hans Hofmann and a really interesting triangle-shaped canvas by Malcolm Morley from the seventies. I’ve always admired his work and feel he was underrated for a long time.

Ultimately, I always follow my gut and do my own research, because I get bored looking at the same “blue-chip” art everywhere, over and over. I like diversity in life and in art.

How do you find art you like to collect?

I’m a bit of a computer nerd. I have always been drawn to screens, and the Internet is a giant library. That’s also how I learned to speak English. It is also where I learned every film-editing program. I learn by doing.

I think that’s how my collecting is as well. I’ll come across a piece online and start researching. I save a lot of images and articles. If I am curious about the artist’s story and if the work stimulates me visually and emotionally, that’s what drives me.

In an antiques store in France I found this great painting of the head of a wolf by Rosa Bonheur, who was a wonderful nineteenth-century painter. Bonheur herself was very forward-thinking and a really interesting artist, but I also found such strength and symbolism behind the animal.

I believe we live in the Glass Age, and digital screens are just that: lit glass. Screens are another support for art, just like parchment, cave walls, wood, paper or canvas. It’s not either/or but alongside.

That said, I don’t think everything looks good on a digital canvas. When I shot my “Tulip 1637” series, I shot them specifically for the purpose of being NFTs and being exhibited this way. I also like how NFTs have democratized and decentralized the art world, especially for dance and performance art.

Can you explain your attraction to flowers as a muse for your art? Are there any artists, past or present, whose work inspires your still lifes?

Everything about flowers fascinates me. Firstly, the obvious — color, shape, movement — but also their strength and resilience. They are graceful and glorious, simply powerful. Having shot faces in film, I wanted to turn my gaze toward nature and to work solo, without a cast and crew, on something more intimate and personal.

With flowers, I have learned so much about myself and others, about joy and abundance, about life and death. To me, flowers have a spirit and a soul. I agree with the late Carl Sagan on nature: “We’re made of the same stuff.”

Many, many painters have inspired me — Manet, Monet, Mondrian, to name a few, but also the still-life photography of Man Ray, Nickolas Muray and Paul Outerbridge Jr. I very much love the work of Barnett Newman, Morris Louis and Robert Ryman. I often paint the backgrounds for the flowers I photograph, either in oil or acrylic, so painting is also a part of my work as a photographer. 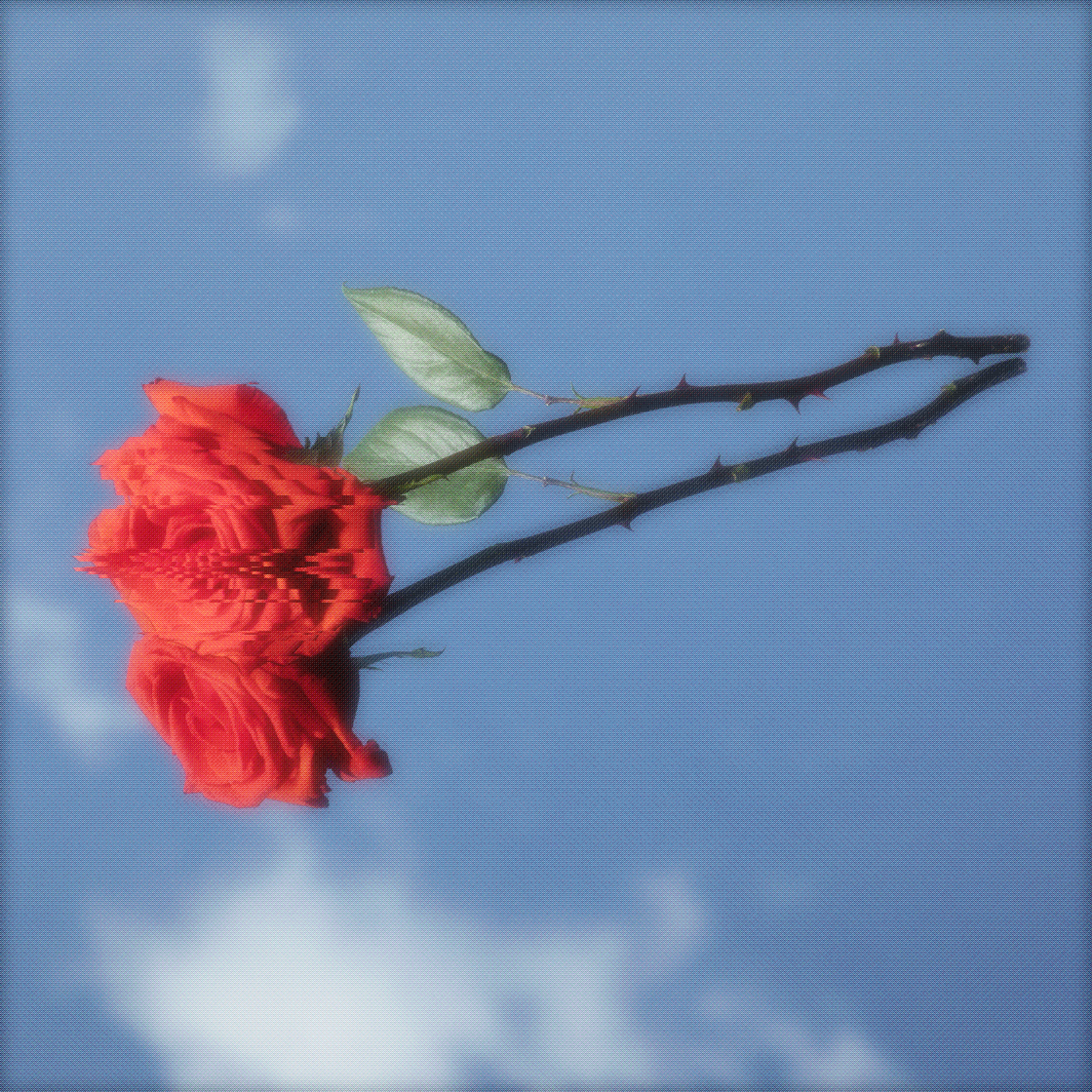