The photographer and NFT advocate explains how technology can enhance the emotional power of flowers.

New York–based photographer and filmmaker Anna Condo describes flowers as her “ultimate muse.” That relationship is certainly evident in her latest role, as curator of our new NFT show, “Flower Gang,” which examines the special relationship between humans and nature.

Comprising more than 100 NFTs by a plethora of digital artists working in the fields of dance, music, photography, illustration and painting, the exhibition harnesses the visual, emotional and conceptual power of botanical imagery.

“I wanted a giant bouquet of creatives, not only to showcase the scope of contemporary talent that’s out there but also for viewers to see how strong this subject matter is,” Condo says.

Condo’s own “Flower Gang” work is a photographic still life of a red and blue tulip set before a hand-painted background. True to her signature style, the image, titled Tulip Mania, captures the bloom at close range, focusing on its textural complexities and intricate petal formation. Unusually, the photo is shot from above, which lends the composition a 3D quality, as if the flower head is bursting out of the picture.

“It almost looks like it’s coming out of the metaverse that empowers the flower. There’s no Photoshop, no tinting, and while the realism is evident, the flower is a sort of abstraction. It’s coming at you, confronting you, yet it remains ethereal and mysterious,” explains Condo, who has been photographing flowers exclusively for nearly a decade.

“I work with Zeze, in Manhattan, arguably the best florist in the city, who provides me with flowers on a weekly basis,” she says. There’s a reason she seeks perfection. The intimate levels of detail captured in her intensely chromatic images endow the flowers with a preternatural power that places them beyond the real and the organic.

“I truly believe flowers have unique personalities,” Condo states. “They aren’t delicate. They are resilient and strong. They have a soul and a spirit. They reveal a range of possibilities.”

Given her deep connection to her subject matter and her belief that the mind is boundless in its potential, crypto art felt like a natural area for Condo to explore. Last year, she ventured into this digital world for the first time with “Tulip 1637,” a series of NFTs made in collaboration with an anonymous group of “cypherpunks.”

“I’d never looked into NFTs before, but it just felt like such a perfect fit,” says Condo, referring to the series of hyperreal photographs, each showing a different stem against a vibrant monochromatic background. Visually, the collection is an incisive reflection on the brevity and beauty of life; digitally, the manner in which the images are minted in the cryptoverse evokes the culture of exclusivity, authenticity and prestige once associated with the still-life tradition of Western art.

Each image from “Tulip 1637” (the title alludes to the financial bubble, known as “tulip mania,” that rocked 17th-century Holland) is encrypted within blockchain technology by assigning it a unique address, or “frame,” that relates to Condo’s signature. In layman’s terms, finding this custom frame or signature in the metaverse is a bit like finding a needle in a haystack or, worse still, a needle in a needle stack.

“There are two unique technical aspects to Anna Condo’s ‘Tulip 1637’ project,” Tim Whidden, 1stDibs’ vice president of engineering and head of the NFT team, says of the complex process behind this intricate validation process. “The first is that the ‘Tulip 1637’ token smart contract has a specific address on Ethereum, which corresponds to Anna Condo’s name: 0xa1111ac011d00888DD91751A4b98769862213cf5. You can see that the address starts with the signature 0xa1111ac011d0, which relates to 0xANNACONDO. The second is that to mint each tulip requires a proof of work. And this proof of work gets harder to achieve after each mint of a tulip until, after tulip 16, it would take more than a year to find it, depending on the computer hardware doing the work.”

Condo believes NFTs are revolutionizing the art world but insists that they do not clash with or undermine traditional modes of expression. Instead, she sees them as an extension of this language.

“I’m not a generative artist, so what are the chances of a photographer entering the perfect marriage of technology and art?” she says of this ground-breaking experiment, which marks the first time an NFT has been encrypted with an artist’s signature, adding to its inimitable status in the Ethereum ecosystem.

“It’s a proof of authorship, and that is something I find fascinating. I don’t understand every technical aspect of the mining process, but that is not so important to me. I don’t need to understand every nuance of a Fellini film, but I completely believe in the artistic and human authenticity that’s conveyed in the work.”

As for the “Flower Gang” exhibition, Condo embraced her curatorial role with enthusiasm. “We human beings tend to complain about what we lack. One thing we do have is an abundance of flowers,” she explains. “I wanted to do justice to the generosity of nature with as many artistic expressions as possible.”

Among her favorite inclusions are Belgian artist Wim Van Cappellen’s A flower and a rock, a photographic portrait of his mother holding a flower, and New Yorker Calla Kessler’s Cherry Pink photograph, of a behatted woman all in pink with her back turned to the camera, admiring a cherry tree. “It’s so atmospheric! To me, it looks like a Hitchcock film,” Condo says of the latter.

The show also contains several choreographic pieces, because Condo is a big supporter of the NFT dance community. One such entry is an evocative performance called Florametry by Ukrainian dancer Irina Angles. The art of verse is explored by Colombian author Ana Maria Caballero, who composed a poignant poem in the form of an MP4 called The Names of Flowers.

Madeline Cass created a flower-themed GIF with a distinctly vintage feel. “Her work brings back memories of Super 8 films and old nature shows that had flowers blossoming in staggered time lapses,” Condo says. “So you see, every piece has its own unique message, and with flowers unlocking deep emotions, stories and hopes for the future.”

Condo’s sentiment is echoed by Chicago-based photographer Summer Wagner, whose portrait of a man wearing a crown of flowers, Prairie Dream, Prince of Spring, has iconographic overtones.

“I have been deeply inspired by the Illinois prairies since I moved here, in 2019,” Wagner says. “The prairie holds an incredible amount of biodiversity, including the beautiful multicolored flowers adorning the subject pictured. The picture contains, to me, a dual story line: one of a strong yet gentle prince and the other a delicate yet wild prairie scape. Together, these elements challenge the notions we project onto ourselves and our world through gender binaries.”

The oft-perceived conflict between technology and the natural world is broached by Canadian Felix Denomme, whose artwork Wallflower — Form Study portrays the bleached-out silhouette of a flower stem superimposed on a black-and-white hand.

“I am interested in my perceived detachment from the natural world in day-to-day life. I believe being unable to escape technology for such a long period of time has left me feeling artificial,” Denomme explains. “Exploring the visual similarities between the human form and flowers is a comforting reminder for me that we are both products of the natural world.”

Condo has a more succinct but no less powerful way of describing her relationship with her subjects: “My images are pretty raw. I set up the shot and let the flower tell me what it wants to say.” 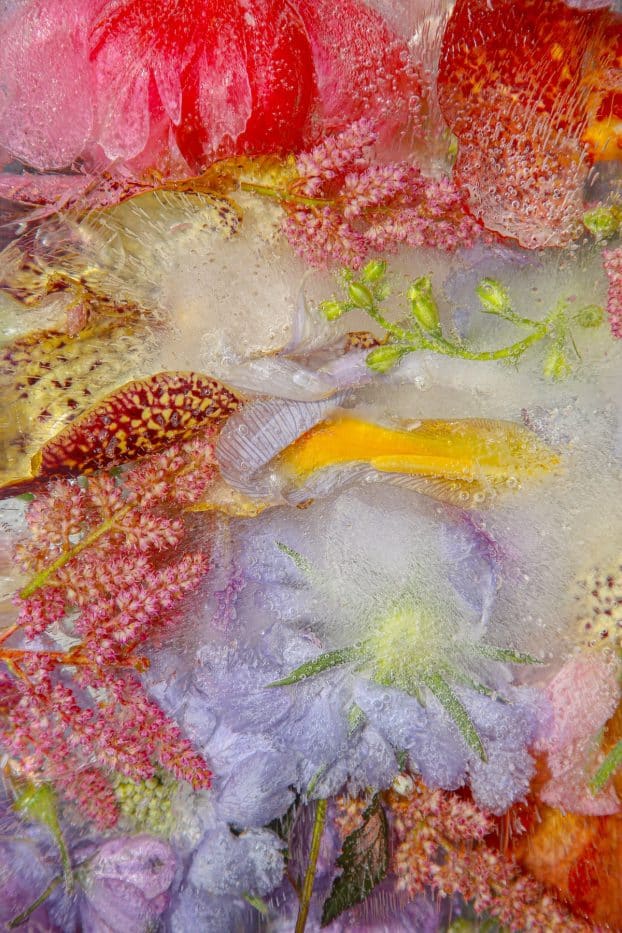 Explore More from the “Flower Gang” Exhibition
View All