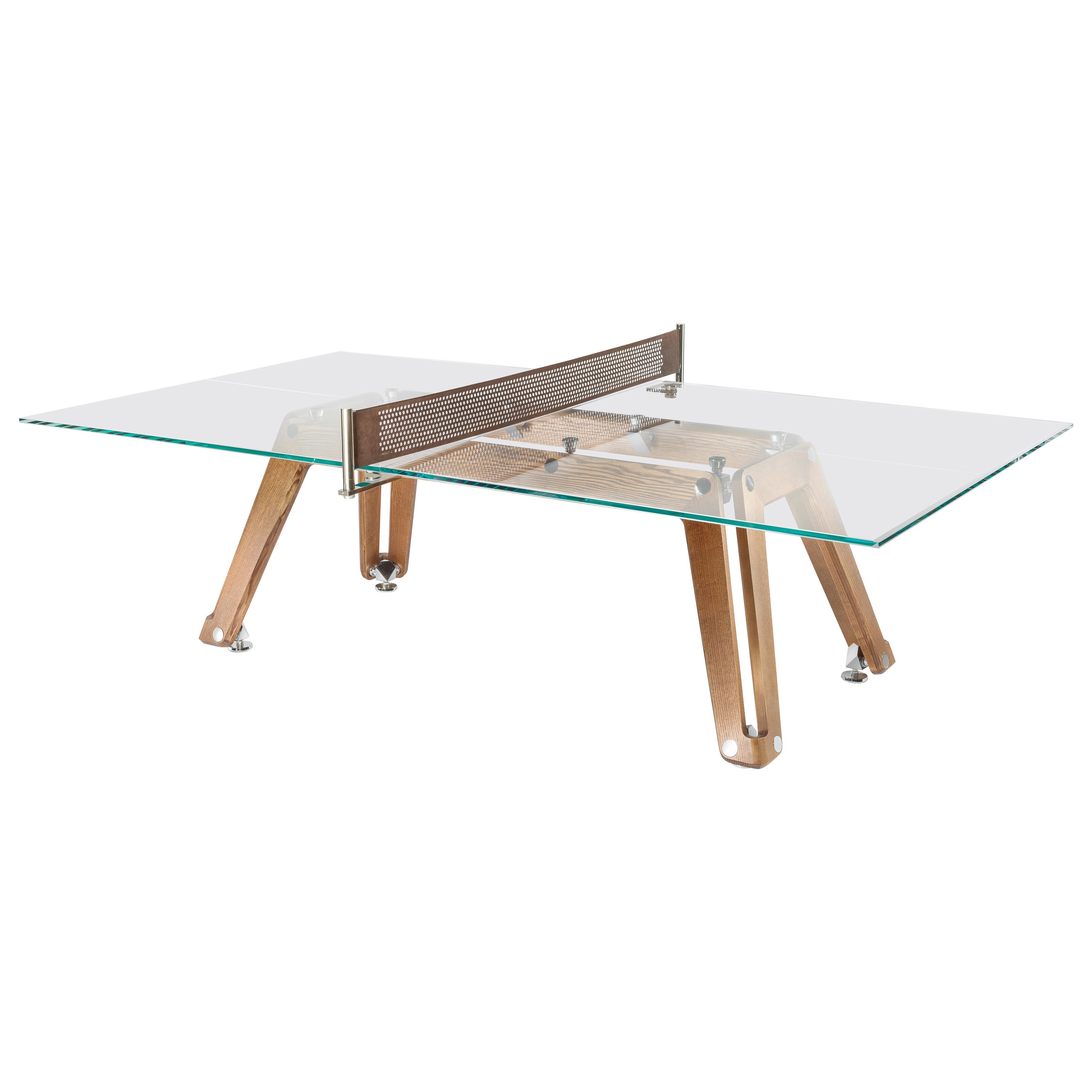 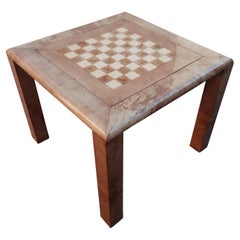 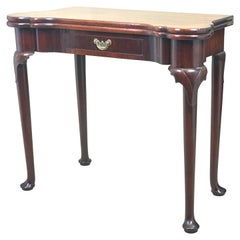 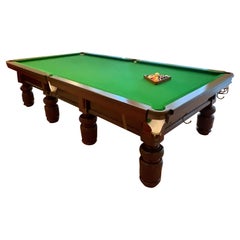 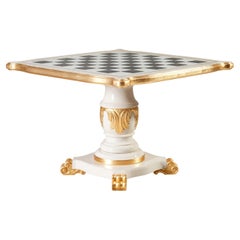 RS Barcelona RS Wood Gold Table in Black by Rafael Rodriguez
By RS Barcelona, Rafael Rodríguez
Located in Edison, NJ
The RS Barcelona wood table is made of iroko, a strong and durable wood for outdoor use. The RS#3 Gold wooden table is one of the highlighted products in our Gold Edition series. Thi...
Category

Vintage 1970's Bamboo & Rattan Games Table & Chairs
Located in London, GB
A stylish and quirky vintage bamboo games and rattan table with two small bench seats that fit underneath. This was made in England, it dates from around the 1970’s. It is very we...
Category

Game Table, Made in Italy, 19th Century
Located in Roma, IT
This game table is a little piece of furniture realized in Italy by Anonymous artist in the 19th century. This unique table in square shape and in mahogany wood has openable tops ...
Category

Black & Blue Beechwood Foosball Table with Aluminium Handles, Made in France
Located in Beverly Hills, CA
Scroll down and click "view all from Seller" to see more than 400 other unique products. Made in France from solid beech wood, this Foosball / Babyfoot is the one you will find in F...
Category

Ming Square Table, circa 1890
Located in Somis, CA
An extraordinary 19th century oversize Ming square table. The table top is constructed of four frame members and rests on the waist and apron that connect to four rounded legs. Such ...
Category

Contemporary Brown Wood Foosball Table with Glass Playing Field by Impatia
By IMPATIA
Located in Milan, IT
The Derby di Milano is a visionary football table that pushes the boundaries of luxury design within the game table industry. Ambitiously reinterpreting the classics, this piece demo...
Category

RS Barcelona RS2 Football Table in Black Stainless Steel by Rafael Rodriguez
By RS Barcelona, Rafael Rodríguez
Located in Edison, NJ
The RS2 football table is a spectacular reinterpretation of one of our cultural classics. It's made with high-quality steel and a polyester paint finish. Outdoor models are made with...
Category

Chess Tray in Shagreen, Shell and Bronze Patina Brass by Kifu Paris
By R & Y Augousti
Located in New York, NY
The KIFU PARIS chess game tray is the ultimate luxury game. Accented with a mixture of shagreen, pen shell and bronze-patina brass this piece comes with all game parts in a velvet po...
Category

Silas Seandel Torch Cut Table Base
By Silas Seandel
Located in Dallas, TX
A torch cut bronze table base by Silas Seandel. Shown with a 24" top but it can support a much larger top if desired. Glass top shown not included.
Category

You and Me HPL Top Ping Pong Table in Black by RS Barcelona
By RS Barcelona, Antoni Pallejà Office
Located in Edison, NJ
The You and Me ping-pong table is a standard sized game table that doubles as a dining or conference table. All the sportiness that it gets from the net, the bats, and the balls, ca...
Category

Midcentury Studio made Live Edge Game Table
Located in Brooklyn, NY
This stunning vintage modern coffee table features a built in cribbage board on the top and a designated area on the bottom that holds the game pieces. A versatile piece that functio...
Category

Gustavian Style Game Table
Located in Port Chester, NY
A Gustavian-style flip-top game table. The top of this table is veneered in radial matched knotty oak with a chestnut burl border and center medallion. It is framed with black inlay ...
Category

Flip Sides Bench with Storage and Flip Checker Board

Backgammon Tray in Shagreen, Shell and Bronze Patina Brass by Kifu Paris
By R & Y Augousti
Located in New York, NY
The Kifu Paris Backgammon game tray is the ultimate luxury game. Accented with a mixture of shagreen, pen shell and bronze-patina brass this piece comes with all game parts in a velv...
Category

Backgammon Tray in Shagreen, Shell and Bronze Patina Brass by Kifu Paris
By R & Y Augousti
Located in New York, NY
The KIFU PARIS Backgammon game tray is the ultimate luxury game. Accented with a mixture of shagreen, pen shell and bronze-patina brass this piece comes with all game parts in a velv...
Category

Vintage Marble Game Table in the Style of Karl Springer
By Karl Springer
Located in Brooklyn, NY
A unique and rare game table in tessellated marble, this Mid-Century Modern piece is styled after the designs of Karl Springer. A removable top is perfect for checkers or chess, whil...
Category

Louis XV Game Tabe 'Tabel Tric Trac'
Located in Berlin, DE
A French game table with a square top, canted corners and a removable round cornered game top displaying a chess game on top and a leather lined surface underneath. When the game top...
Category

Filotto Modern Glass POOL Table with Smoked Glass and Black Nickel by Impatia
By Adriano Design, IMPATIA
Located in Milan, IT
Filotto is the first product created for Impatia’s collection, which gives new life, new characteristics, and new values to a Classic product. The design, construction, and workmansh...
Category

Shagreen Game Table with Bronze-Patina Brass Accents R&Y Augousti
By R & Y Augousti
Located in New York, NY
The 4 in 1 Parsons game table R&Y Augousti is a truly luxurious statement piece for your home. The clean lines of the overall piece in cream shagreen, accentuated by the sleek bronze...
Category

Granite Square Outdoor Dining Table
Located in Brooklyn, NY
This compact yet bold table will help create an oasis in any outdoor space. Made from solid granite with a super polished finish this piece will hold up for years to come while addin...
Category

RS Barcelona RS4 Home Foosball Table in Blue
Located in Edison, NJ
The RS4 Home football table has been designed to enjoy at home, with family and friends. For all ages. For sharing. For any moment. For doing it yourself and then, when the match sta...
Category

Round Banded Mahogany Georgian Style Accent Foyer Table by Leighton Hall
By Leighton Hall Furniture
Located in Suwanee, GA
This is made-to-order round traditional mahogany accent/foyer table made in the Leighton Hall shop. It features a field of cathedral mahogany with a contrasting mahogany border. It h...
Category

Bring drama and duels of dexterity into your home with vintage, new and antique game tables for every kind of game.

Who doesn’t love a little competition? Historians estimate that early versions of games such as backgammon were played by members of ancient civilizations at least as far back as 3,000 B.C. Chess, which likely originated in India as a game called chaturanga, is a timeworn test of skills and strategy as well, and the modern era’s iteration of the game was enjoyed by nobles at least as early as the 16th century.

While the upper classes in Europe were among the only chess players who could afford the game’s decoratively carved ivory pieces, the game eventually became accessible to the general public. In the late 19th century, the game’s first official chess championships took place, a realm that eventually produced celebrated players such as avowed Eames Executive chair enthusiast Bobby Fischer. Today, antique chessboards have seen an uptick in demand owing to a successful Netflix series in 2020 called The Queen’s Gambit, which chronicles the life of fictional chess prodigy Beth Harmon.

Modern versions of chess boards and other home game tables may have evolved to accommodate the variety of games for which they’re used but are still versatile pieces of furniture. Not every card table with chairs is the ideal dining table, but you certainly don’t have to limit a game table to recreational use.

Antique trictrac tables, for example, were products of 18th-century France, wherein furniture makers created what looked like multipurpose neoclassical writing desks and card tables that when their tops were removed revealed trictrac, chess and checkers surfaces. Other game tables, in a complete commitment to fun, merely support good old-fashioned competition. Contemporary Ping-Pong (or table tennis) tables, which have origins in 1880s Victorian England, can be quite sophisticated in form and are made from a variety of materials today. A billiards table is an iconic piece for any game room or living room, but your pool table is really going to be used for only one thing, right?

Antique or new Regency-style game tables, mid-century modern tables or Art Deco–style card tables, perhaps fashioned from rosewood or mahogany, might be equipped with convertible tabletops to shift from meals to game time in a snap. If you prefer poker or opt for a card table topped with a checkerboard, convenient drawers and other compartments can be found in new and vintage game tables that fit poker chips or other types of game pieces perfectly.

Find a range of top-quality vintage and antique game tables on 1stDibs that can help you introduce a bit of class to every competition at home.

These six versions redefine table tennis for the modern player.