Something Old, Something New: How Antiques Amp Up Contemporary Spaces 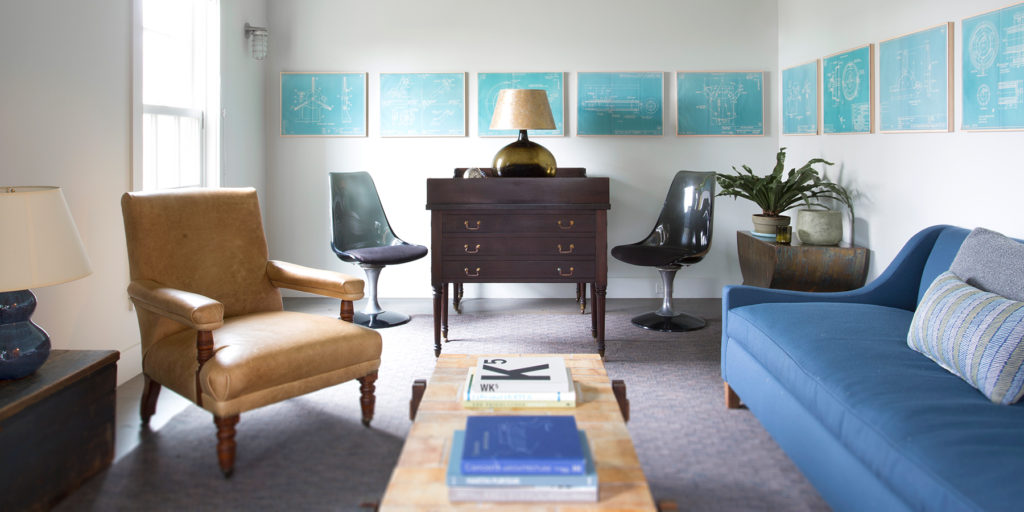 Antiques add drama — and ­more than a little gravitas — to contemporary interiors. Top talents reveal how they pull off the balancing act. 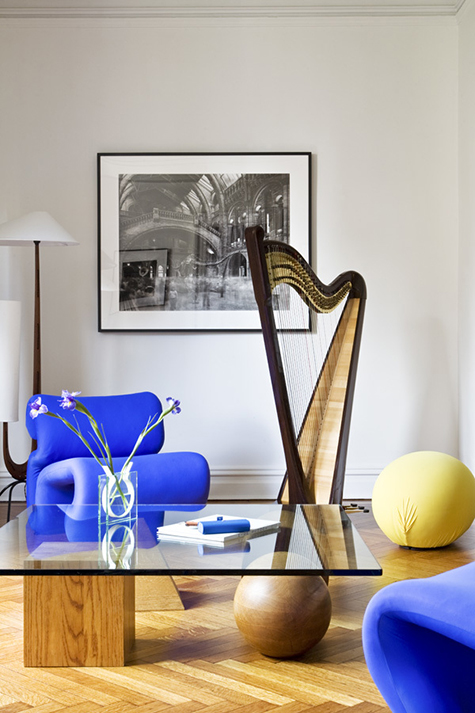 Call it the X factor: the unexpected juxtaposition of decorative elements that lifts a contemporary interior out of the ordinary and makes people sit up and take notice. Often, it’s the insertion of one or more well-chosen antiques, thoughtfully deployed against the clean lines of contemporary furnishings, that makes the whole setting pop. “Antiques are the element of surprise in a contemporary space,” says Los Angeles– and New York–based interior designer Alexandra Loew.

“Antiques are a great foil to chic-but-clinical newness,” is how James “Ford” Huniford, of Huniford Design Studio in New York’s Greenwich Village, puts it. “They can keep a contemporary interior from looking like a sterile showroom.”

It wasn’t until the last few decades of the 20th century that mixing styles and periods became acceptable, and then de rigueur. Prior to that, people lived with whatever was, for them, modern in its truest sense — “of the moment,” whether the moment was Louis XIV, Colonial or high Victorian. The early 20th century saw revivals of classical styles, the birth of the modernist movement and the swoops and amoeboid shapes of the immediate postwar years. By the 1960s, when the typical contemporary room was white and spare, with furnishings predicated on the right angle, some design mavericks began bringing in Tiffany lamps and bentwood rockers to leaven the mix.

Today, with websites making global shopping possible, the whole of decorative-arts history is fair game for those seeking to create interesting interiors, which can incorporate every style and period from antiquity to the present day. But a delicate balancing act is required. Many top designers selectively use antiques in otherwise contemporary settings to add drama and enliven their schemes. Below, a few particularly successful examples of such a strategy. 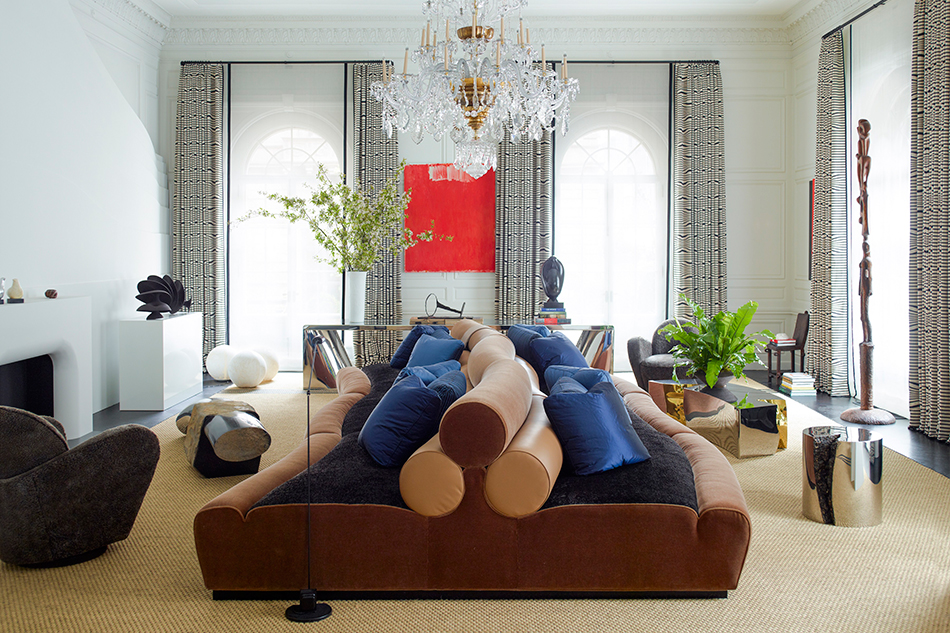 For the 2014 Kips Bay Decorator Showhouse, designer Juan Montoya created a plush, room-filling double-sided sofa, upholstered in velvet, leather and mohair. Hanging from the ceiling was another showstopper: a mammoth 18th-century crystal chandelier from a palace in Madrid, lent by Mallett. “I didn’t choose a modern chandelier, which was the obvious thing,” Montoya says. “I wanted the juxtaposition of old and new — something magnificent and precious that would overwhelm you with its beauty when you enter the room, and that had to be a very special antique.” Photo by Eric Piasecki 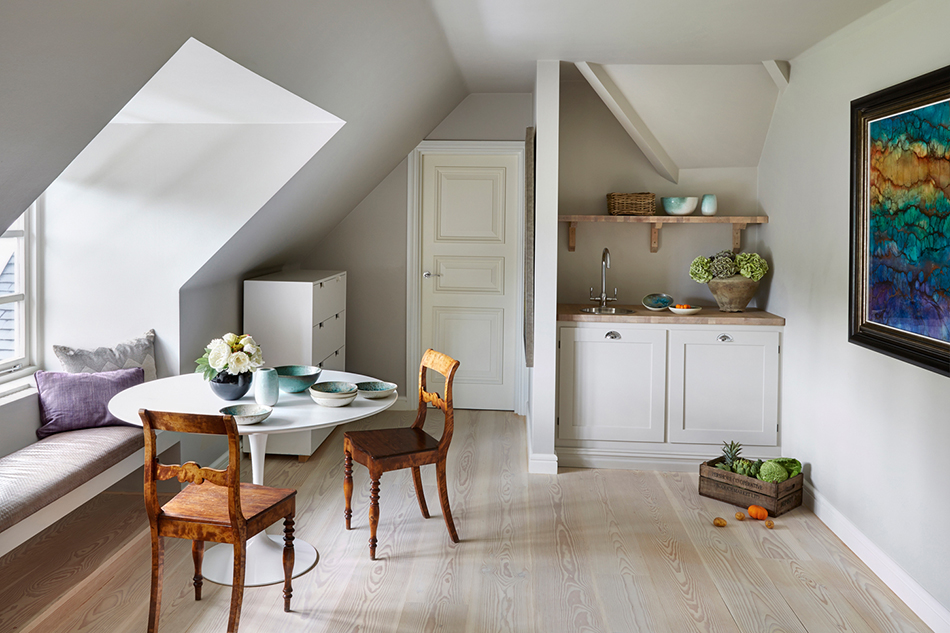 In a skylit garret under the roof of a London townhouse, Nina Hertig and Ebba Thott, of Chelsea-based Sigmar, coupled a pair of carved-wood mid-19th-century Biedermeier chairs with a cool icon of 20th-century modernism, Saarinen’s white pedestal Tulip table. Although produced a century apart, “both pieces,” points out Hertig, “are sculptural, clean-lined and simple for their time.” There’s a very basic psychological reason Sigmar includes antiques in otherwise contemporary interiors: the warmth and comfort they provide. Says Hertig: “Antiques make rooms feel loved and lived-in in a way all-new pieces will never be able to do.” 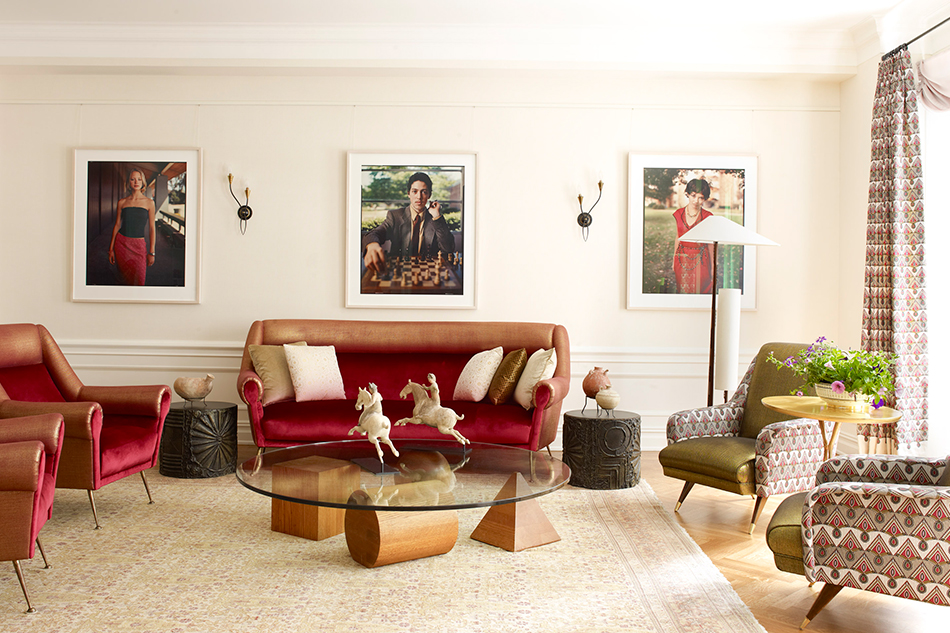 This Manhattan living room by Alexandra Loew features Tang Dynasty terra-cotta horses and vessels, as well as an antique Amritsar carpet from Stark. A Metafora table by Massimo and Lella Vignelli is surrounded by red Rossi di Albizzate chairs and a sofa from Eccola. Photo by William Waldron 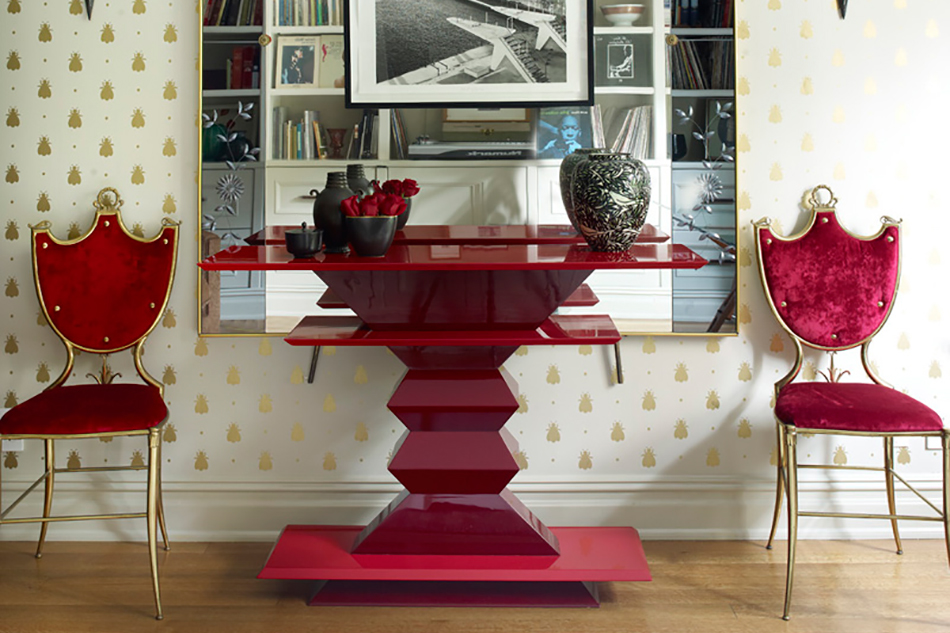 In another part of the same co-op, Loew flanked an 18th-century Italian hall mirror from Mantiques Modern with a pair of mid-century velvet-upholstered chairs. The Pawlen console table, purchased from Wright Now, was restored in two shades of red lacquer with a combination of mirror and satin finishes. The Max Laeuger vase on the right side of the console came from Jason Jacques Gallery. Photo by William Waldron 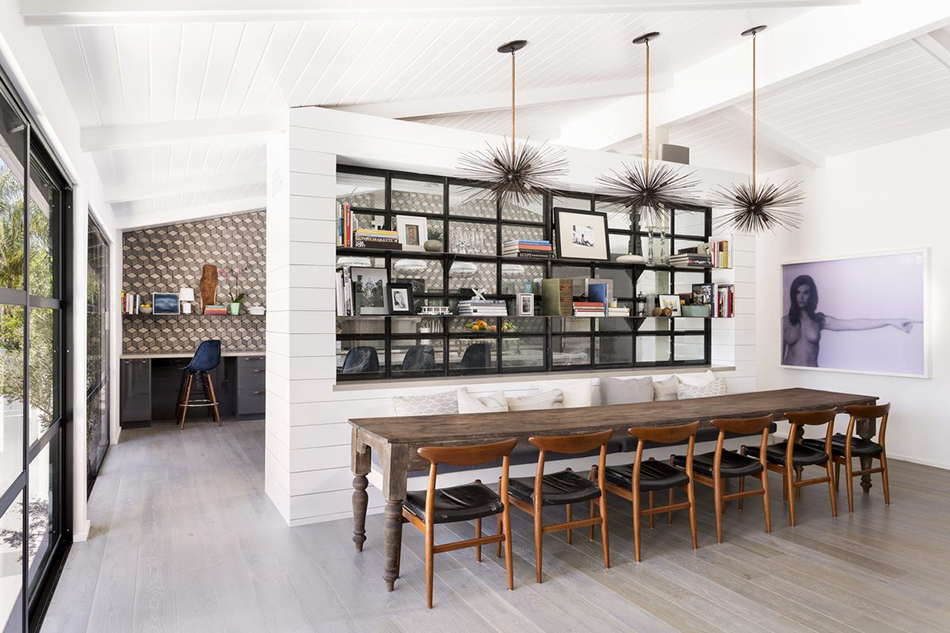 In this Los Angeles home, the glass in the room divider was salvaged from a factory building just before it was demolished. Vintage teak and leather chairs by Hans Wegner, purchased through Danish Modern LA, line one side of a 13-and-a-half-foot teak Colonial-style farm table from Southeast Asia, ca. 1920. “We always like to introduce interesting pieces into contemporary spaces to warm them up and add character,” says Ryan Brown, of Brown Design Group, who decorated the house. “Imagine the stories that have been told across that dining table over the past ninety years.” 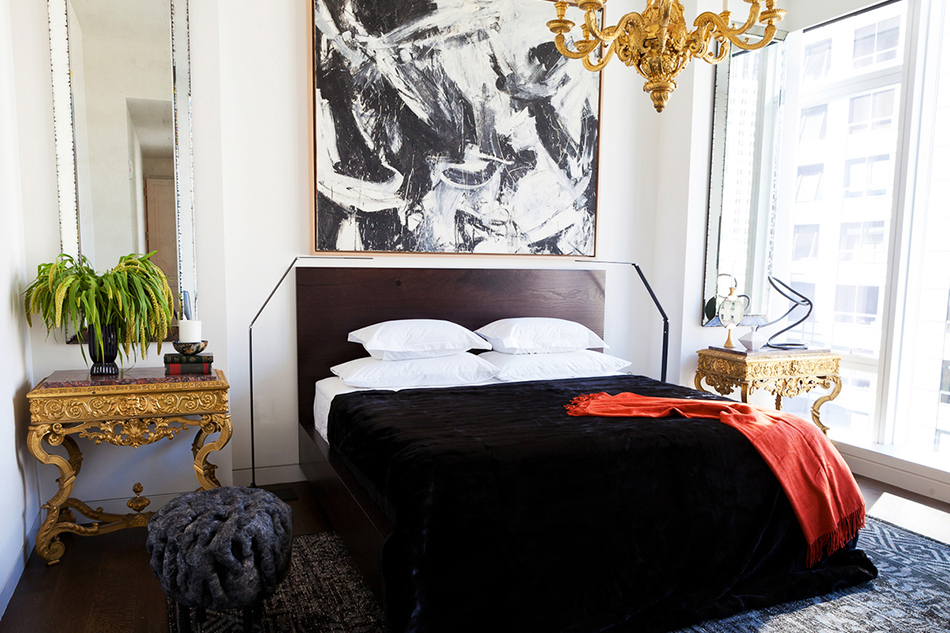 “It’s about being purposeful, restrained and selective,” says Caleb Anderson, of Drake / Anderson, who, with his partner, Jamie Drake, has decorated many high-profile Manhattan interiors. “If you have an ornate, eye-catching French antique mirror, pair it with a simple, clean-lined contemporary console to let the antique piece breathe and shine.” In this bedroom by Drake / Anderson, a pair of gilded antique tables flank the modern bed. Photo by Lauren Silberman 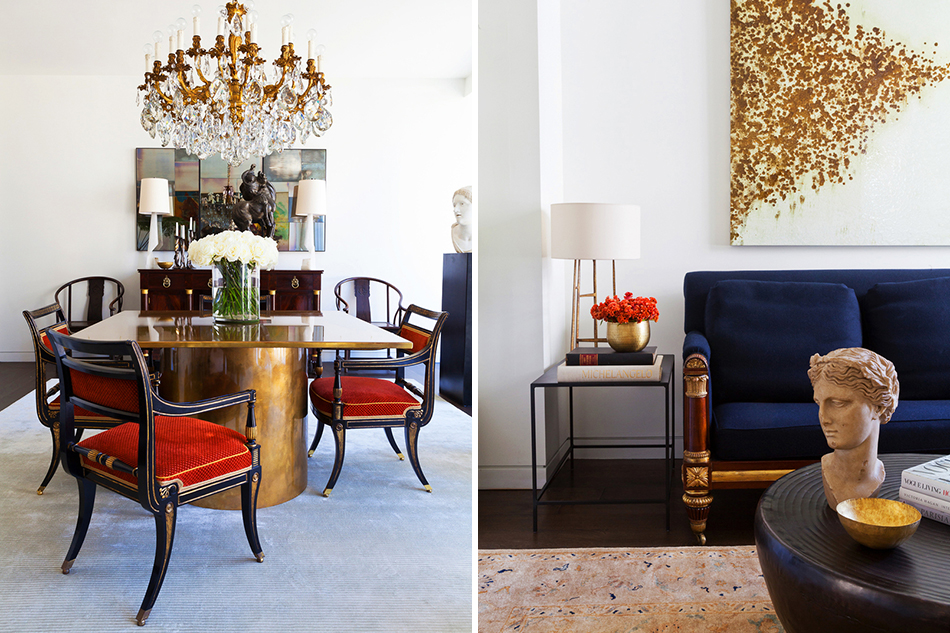 By looking for “commonality in color, patina or texture,” Anderson says, “you can thread pieces from different periods together and make a successful composition.” Case in point: the Manhattan high-rise apartment of a client who loves antiques and owns quite a few, including a set of Regency-style dining chairs, ca. 1880, with sabre legs and a Louis XVI–style gilt-bronze and crystal chandelier, both purchased from David Duncan Antiques. “We had to find a way to use them and not have them look out of place within this contemporary shell.” Photos by Lauren Silberman 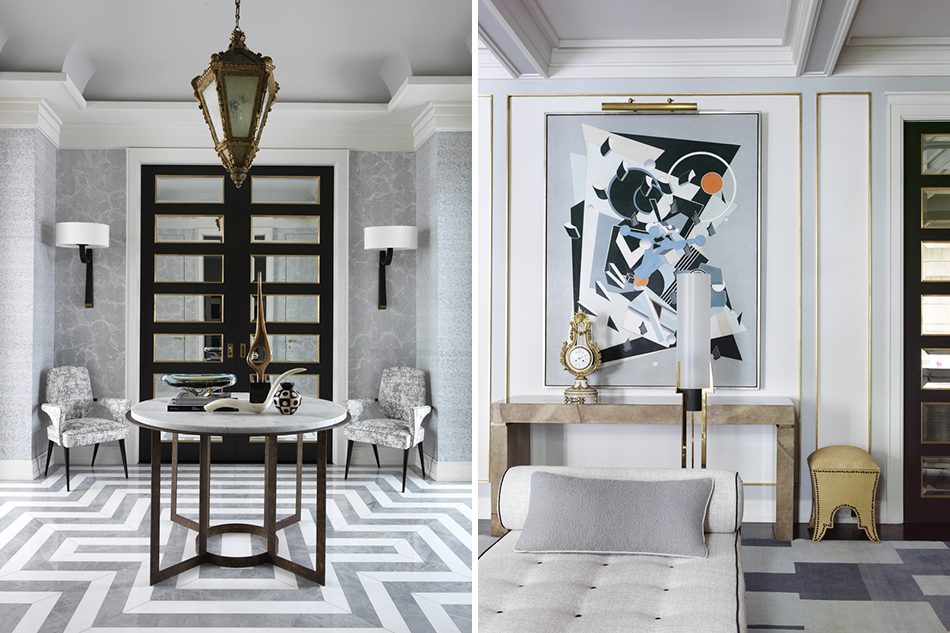 Left: Jean-Louis Deniot designed this Manhattan apartment entryway, where a Louis XVI giltwood lantern hangs above a custom marble and bronze table by Deniot. Right: In the living room of the same apartment, characterized by clean lines and a neutral palette, an antique gilded clock sits on a sleek console table. Photos by Jonny Valiant 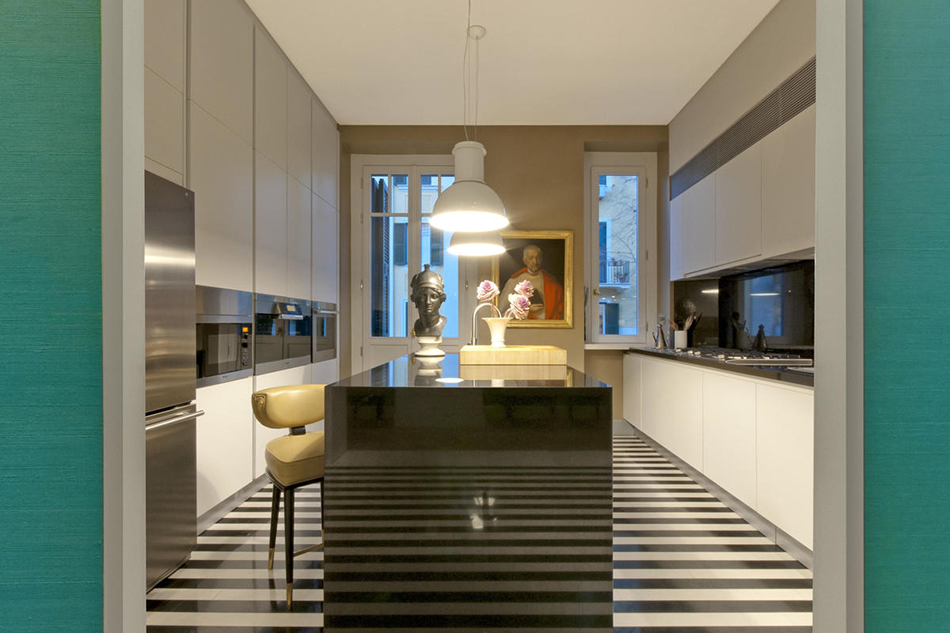 “I don’t like fully contemporary interiors. I prefer to mix styles and periods to create a timeless elegance in an engaging atmosphere,” says Achille Salvagni. He accomplishes that in his Rome apartment, where a family portrait from 1830 and a 1920s plaster bust contrast with the clean lines of the kitchen. Photo by Paolo Petrignani 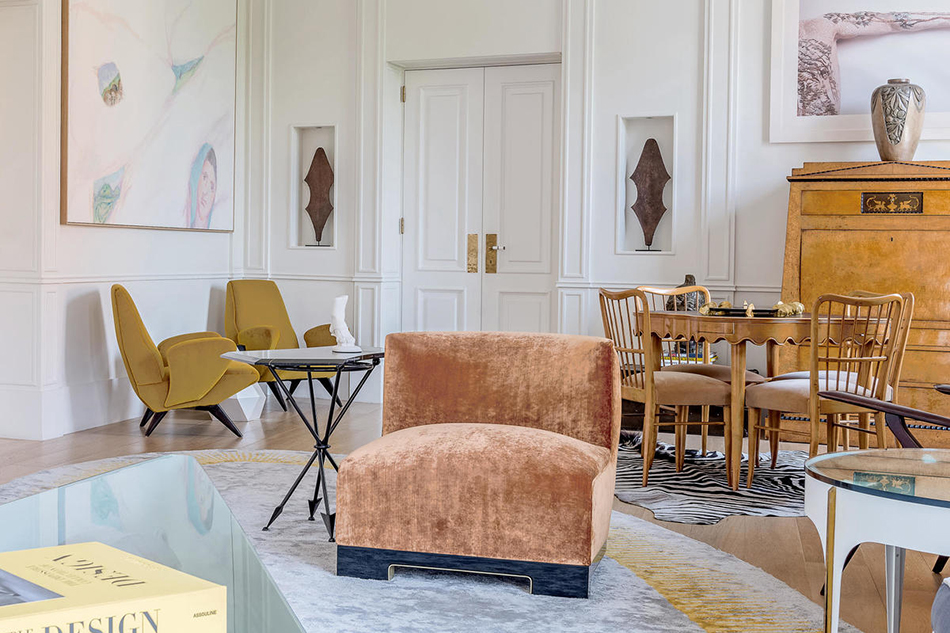 A Beidermeier chest, ca. 1870, is a standout in Salvagni’s eclectic living room, which also features a Paolo Buffa card table and chairs, 1962, and the Salvagni-designed Vittoria chair, from a limited edition of 40 pieces, which is upholstered in Dedar velvet with lacquered wood structure and brass details. Photo by Paolo Petrignani 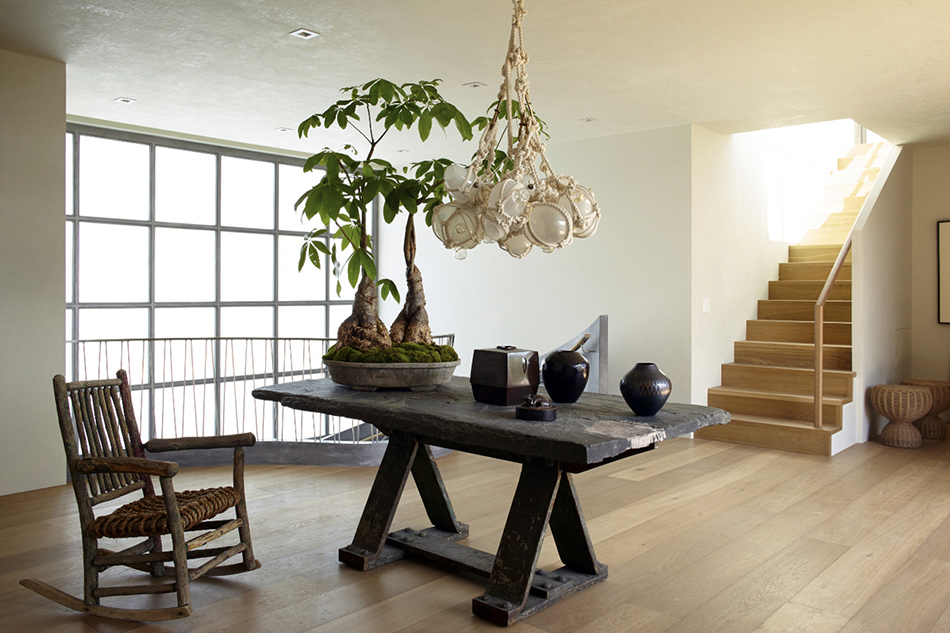 “It’s all about the mix of antique and contemporary,” says Jeffrey Alan Marks, who chose Lindsey Adelman‘s Knotty Bubbles chandelier to hang over a distressed-wood table from Coup d’Etat. (The table’s weight, more than 1,000 pounds, was an issue when the piece had to be hauled up a spiral staircase.) Marks picked up the folk-art rocking chair at Brimfield Flea Market.