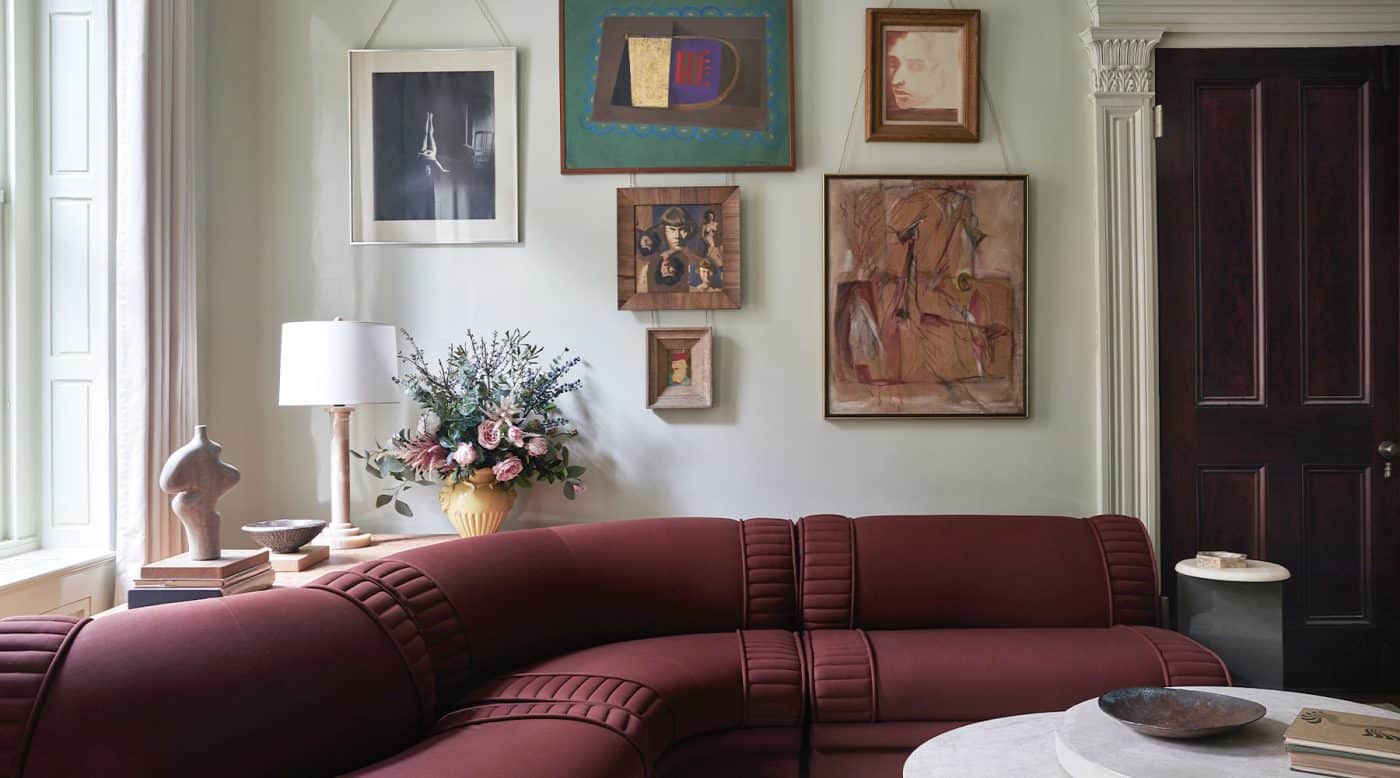 Missed the Brooklyn Heights Designer Showhouse this year? It’s not too late to get a glimpse of its creative interiors — and take home your favorite furniture and decor.

November 6, 2022Say what you will about Brooklyn Heights, the celebrity neighborhood with killer Manhattan views across the East River and “fruit streets” drolly named Cranberry, Orange and Pineapple. Just don’t call it stuffy.

Longtime resident Harry Heissmann argues that there’s “edge to it,” a restless inside-outsider vibe he terms “old-world with a kick.” A decor darling in his own right, he served as honorary design chair for the 2022 Brooklyn Heights Designer Showhouse, which benefited the Brooklyn Heights Association, a preservation charity founded by leading local citizens more than a century ago.

Heissmann and cochairs Ellen Hamilton and Erika Belsey Worth recruited 17 diverse creative firms to redesign a historic 1839 Greek Revival townhouse that had been gently updated over the past decade. The showhouse recently closed its doors after a successful five-week run, but many of its rooms — enlivened by furniture, art and objects sourced from 1stDibs dealers and still available on the site — left an indelible impression on its visitors. Here, we revisit five that are particularly chockablock with 1stDibs treasures.

Up the townhouse’s impressive marble stoop and through imposing double doors, visitors discovered a high-ceilinged double parlor by interior designer Jenna Chused. “I’m so from Brooklyn, and it was my taste: retro — but not too retro,” says Chused, who is also a 1stDibs seller. A fashion veteran, she once worked in Donna Karan’s studio and later created colorful textiles for groundbreaking brand DwellStudio.

Chused says she is allergic to white and, for the drawing room walls, searched for any new sort of “neutral that wasn’t cream or tan.” She came up with a high-polish pistachio lacquer that echoed the green background of a 1918 Henry Caro-Delvaille society portrait she hung near the front window.

Chused purchased almost every piece she deployed. “I didn’t want to ask to borrow things, and knew I could sell everything later,” she says. The Caro-Delvaille canvas remains available, along with other key pieces, but a private client acquired the parlor’s pair of 1950s ebonized mahogany Harvey Probber slipper chairs upholstered in a Dedar silk.

Designer Tara McCauley hoped her flirtations with the 20th-century avant-garde in the primary bedroom suite, one floor up, might offer visitors the design equivalent of a magic-mushroom microdose. “I’m a very vivid dreamer in my own bedroom at home,” admits McCauley, who’d worked alongside Nick Olsen before recently heading out on her own.

Over the mantel, an eye-shaped mirror doubled as a Surrealist tulipiere worthy of Schiaparelli pal Salvador Dalí. Thomas Engelhart, a maker who sells through 1stDibs dealer Emily Eerdmans, adhered his signature hand-inked marbleized paper to the cardboard mirror frame. Fourteen individual fresh-cut anemones gave it a halo of “eyelashes,” thanks to water vials hidden in the cardboard.

At just under a hundred square feet, a guest room by Studio Dorion couldn’t help being packed with ideas. Studio partners Michelle Ficker and Peter Dolkas met at Billy Cotton five years ago, and you can see the Cotton influence in their clean modernism — think Eileen Gray’s Paris apartment spiked with David Hicks antiques. “A Greek Revival house must incorporate traditional and classical elements to succeed,” Dolkas says.

Hanging overhead was a delightful polished pewter chandelier from the Swedish Grace period. Two tiny framed mirrors added sparkle to a big sheet of architectural mirror the designers glued to the wall. (All were on loan from West Palm Beach dealer PRB.) A Garment District cotton-twill chino — in four muted shades of beige — was paper-backed for the walls and also draped from the ceiling above the wall-to-wall “alcove” bed.

Mike Rupp — like Studio Dorion, making his showhouse debut — created a lounge one flight up. He says he imagined his client as a Brooklyn CEO who “kicks off her heels and pours a Manhattan.” Existing figured-walnut bookcases gave the space a rich feel, so he painted the ceiling a complementary gold.

Furnishings came almost entirely from the 1stDibs dealers that Rupp Studio frequents, among them Hostler Burrows, which contributed a Kerstin Hörlin-Holmquist lounge chair and Otto Schulz sofa. Carlos de la Puente Antiques loaned the 1980s Asian modern coffee table by the LaVernes, and Donzella, a Max Ingrand for Fontana Arte torchiere. The vintage Moroccan Tuareg mat, from FJ Hakimian, was leather and reed, and Pierre Knop’s large-scale landscape painting over the sofa was sourced from Yossi Milo. The Maison Jansen secretary and Biedermeier daybed are from Newel. “Each told the story of its artist and had a livability,” Rupp says.

On the top floor, a riotous circus-themed bedroom by JDK Interiors principal Jenny Dina Kirschner blended amusing kitsch with signed modernism. A 1970s Italian porcelain bird lamp perched atop an old Lane Pueblo Collection oak nightstand she found online. A tidy new Halsey floor lamp and St. Charles dining chair were both from 1stDibs maker Volk Furniture. Painter Adam Sultan’s happy Dr. Seuss–inspired mural swished around a vintage polished-brass Stilnovo flush-mount chandelier from 1stDibs dealer Thomas Gallery. Kirschner believes “interiors are a giant blank canvas” and notes that lots of her work with clients might “look like this if it were up to me.” Perhaps even a little more maximalist. “It would have been awesome to put a soft-pretzel stand in there!”