How Designer Elena Frampton Is ‘Battling the Boring’ in the Hamptons 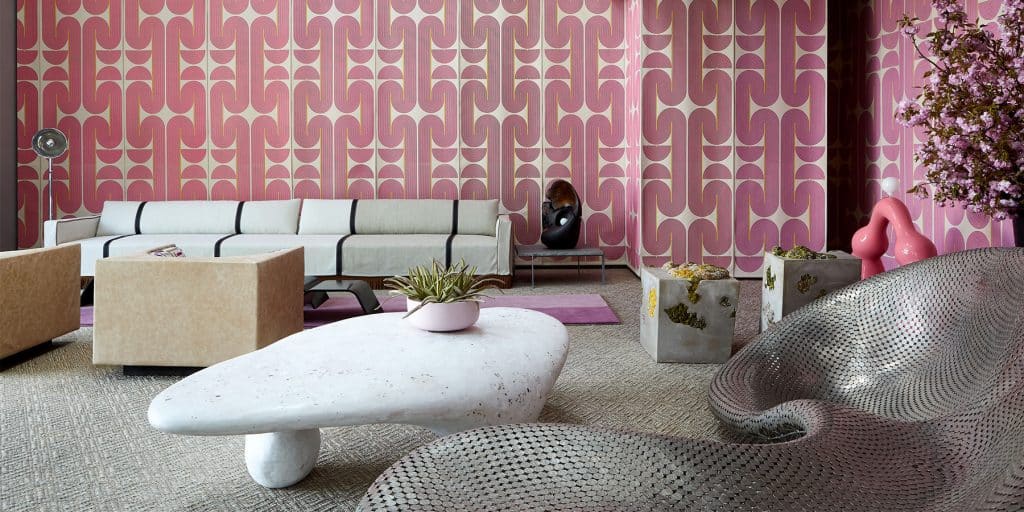 With Exhibition, her seasonal gallery-cum-studio in Bridgehampton, Frampton proposes summer-home decor that’s anything but vanilla. 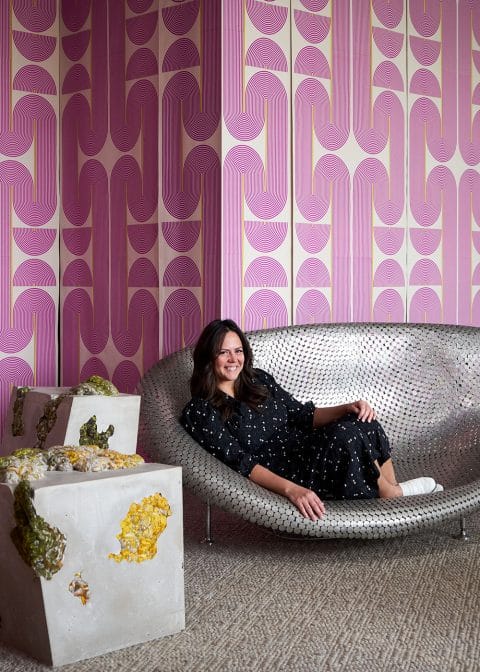 July 14, 2019In her Hamptons gallery space, Exhibition, Elena Frampton reclines on Johnny Swing’s Murmuration bench, made of quarters. Top: For the current season at Exhibition, Frampton commissioned artist Elise Ferguson to create canvas wall panels “with a five-shade gradient from fuchsia to raspberry.” The Polar Bear Form coffee table, by Rogan Gregory, is made of a local Montauk aggregate of quartz, granite, calcium carbonate and bone.

On an April morning in 2018, designer Elena Frampton padded out in her flip-flops to look at a commercial space for rent not far from her cottage in Bridgehampton, where she lives part-time. “It was the day I was going to Milan for Salone,” she recalls, and she was there mainly to placate her landlord. “He worked on me for months, saying, ‘I have a space I think would be great for you.’ So, I walked over and opened the door. It was a garage full of vintage cars,” with soaring ceilings, eight skylights and a mezzanine. “I sat on the steps and thought, ‘This is amazing. Now what?’”

That 2,000-square-foot space, on a well-traveled road not far from the Bridgehampton railroad station, soon became Exhibition, a seasonal art and furniture gallery and the Hamptons outpost of Frampton Co, the designer’s Manhattan-based firm, which she founded in 2015. “We were a traditional company providing interior design services, renovation and art advisory,” Frampton says, “but this space called for being open to the community.” 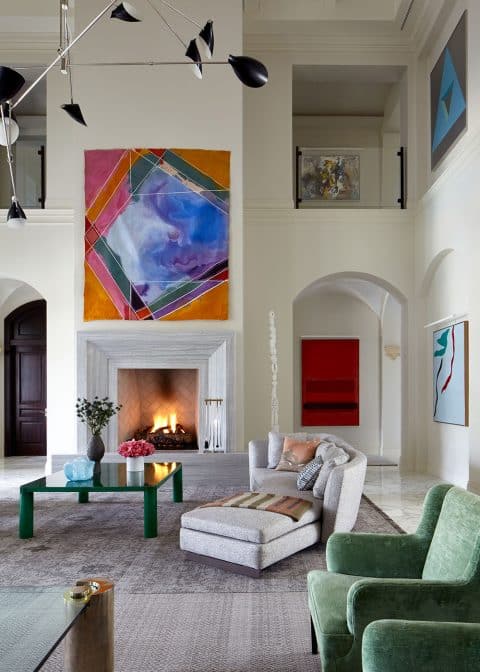 Joe Overstreet’s untitled 1972 canvas, above the fireplace, ties together the lively color scheme of this living room in Jupiter, Florida. The custom lighting, by David Weeks Studio, hangs over a green Wolcott coffee table by Roman Thomas. The vintage Karl Springer glass table in the foreground is from Lobel Modern.

As it happened, Frampton had been looking for a new creative challenge since participating in the Brooklyn Heights Designer Showhouse the year before. “That was the first time I was able to creatively go where I wanted to go, beyond developing a portfolio geared to servicing clients,” she says. For the showhouse, she designed a kidney-shaped desk with a high-gloss lacquer finish that became the starting point for a new furniture line, and she reveled in “giving people a chance to experience what’s possible and show that bold ideas can be livable and comfortable.”

When the Bridgehampton space came up, Frampton realized she could have her own showhouse every summer, collaborating with artists and designers, dealers and galleries to create “a concept, a vision, a point of view reflective of where we are at the moment.”

For this summer’s installation at Exhibition, Frampton partnered with artist Elise Ferguson and Tribeca gallery R & Company to conjure an environment in which visitors experience art and furniture in new and unexpected ways. Ferguson’s immersive textile installation — 21 canvas panels screen-printed and hand-painted with a graphic repeat pattern — forms a backdrop for a meticulously curated selection of vintage and new works, including Wendell Castle’s undulating 1960s plastic floor lamp, Brazilian architect Oscar Niemeyer’s snake-like ebonized coffee table and Frampton’s own designs for her private label F Co Collection, among them a 14-foot-long bespoke sofa with leather-trimmed upholstery inspired by equestrian blankets. Rogan Gregory’s solid cherry-burl table lamp and Dana Barnes’s stone-like Endolith stools, with tufts of woolen fiber emerging from their tops and sides, are so full of personality, says Frampton, “that when I leave here at night and turn off the lights, I feel they might come alive.” 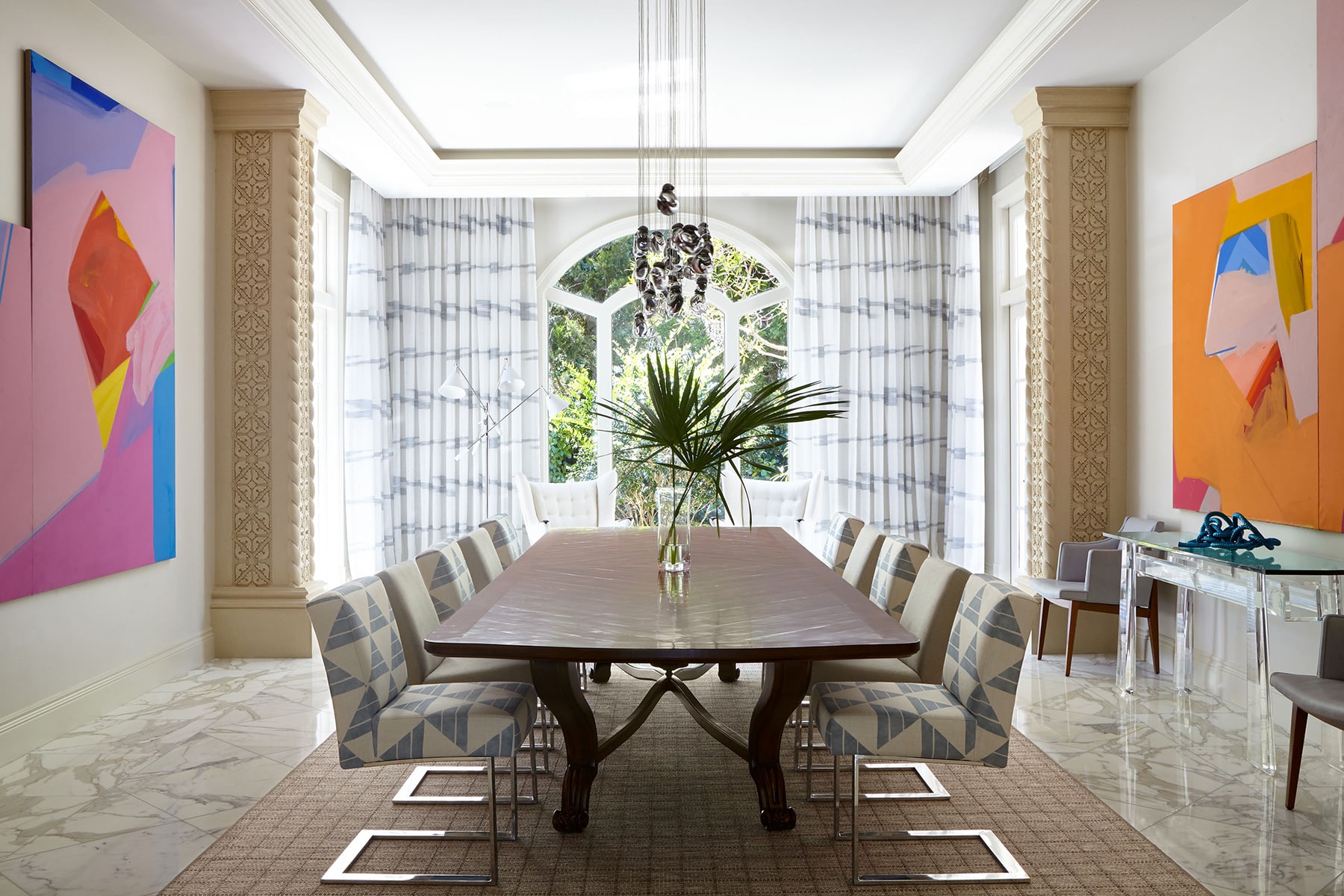 In the dining room of the Jupiter house, two abstract works by Michael Boyd — Quasar, 1967 (left), and Baby Kale2, 1966 — flank the client’s own table. The chairs, from Paul Evans’s Collection 77 for Directional, are covered in a Zak+Fox fabric that complements the Corragio drapes.

Exhibition is open by appointment in June, September and October, and seven days a week in July and August. Just don’t call it a pop-up. “To me, a pop-up is a corporation coming in to take advantage of summer sales,” Frampton says. “I’m a year-round resident and part of the community.” Moreover, the design studio in the mezzanine is open year-round. Frampton was drawn to the East End originally because “I felt the community could use our voice,” she says. “We’re so used to summer-house tropes like white linen slipcovers. I wanted to shake things up and add aesthetic complexity.”

Far be it from Frampton not to create a sensation. “I’m always battling against the boring,” she says, and has been, apparently, since she was a child growing up in the Pasadena area. “From a very young age, I was asking for pens and pads of graph paper, on which I taught myself to draw floor plans. My parents still have hundreds of them.” She became aware of the area’s great architecture, including that of Richard Neutra, Rudolph Schindler and Frank Lloyd Wright, and had a subscription to Architectural Digest by the time she was 10. 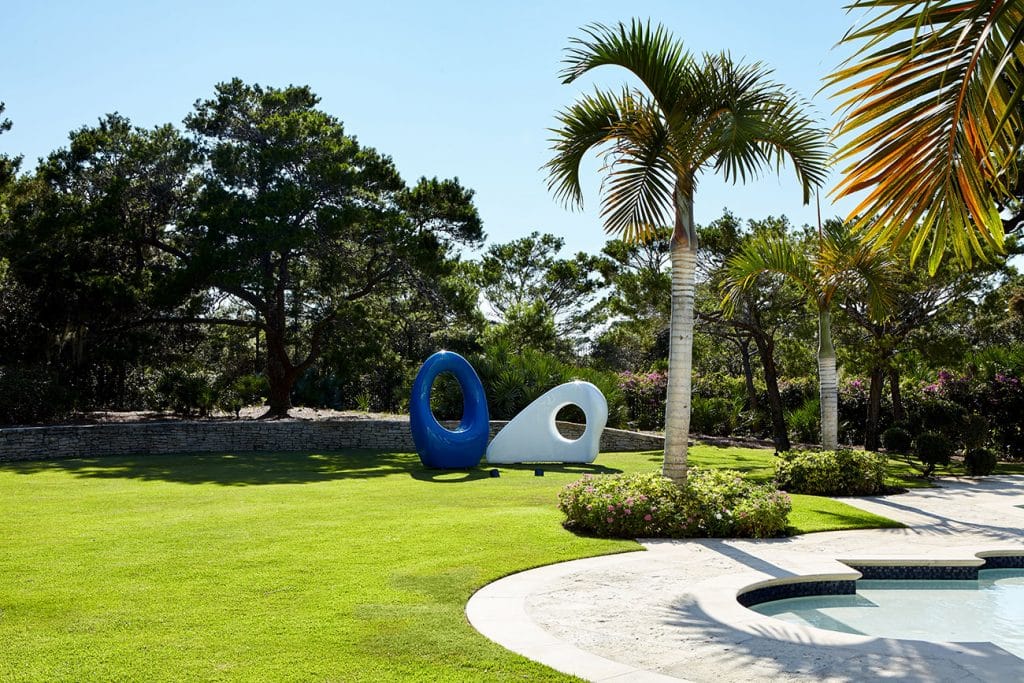 Mia Fonssagrives-Solow’s blue Egg Plomb, 2016, and white T Rex i, 2016, adorn the lawn of a two-acre estate in Jupiter, Florida. 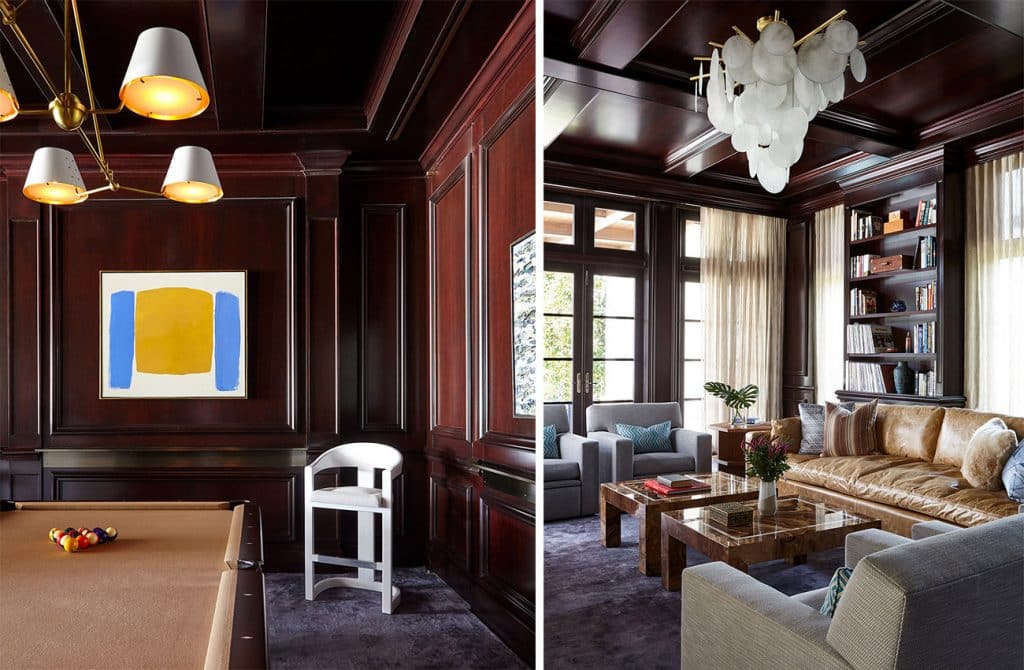 In the media room of the Jupiter home, a custom six-shade version of the Urban Electric Co.’s Chiltern pendant lights the pool table, while Ray Parker’s Untitled, 1963, provides a bright contrast to the existing wood paneling. Across the room, a Nimbus pendant by CTO Lighting hangs over a pair of vintage coffee tables from 1stdibs. The recliners, upholstered in David Sutherland Nit Witty fabric in Platinum, are custom pieces from Frampton’s F Co Collection. 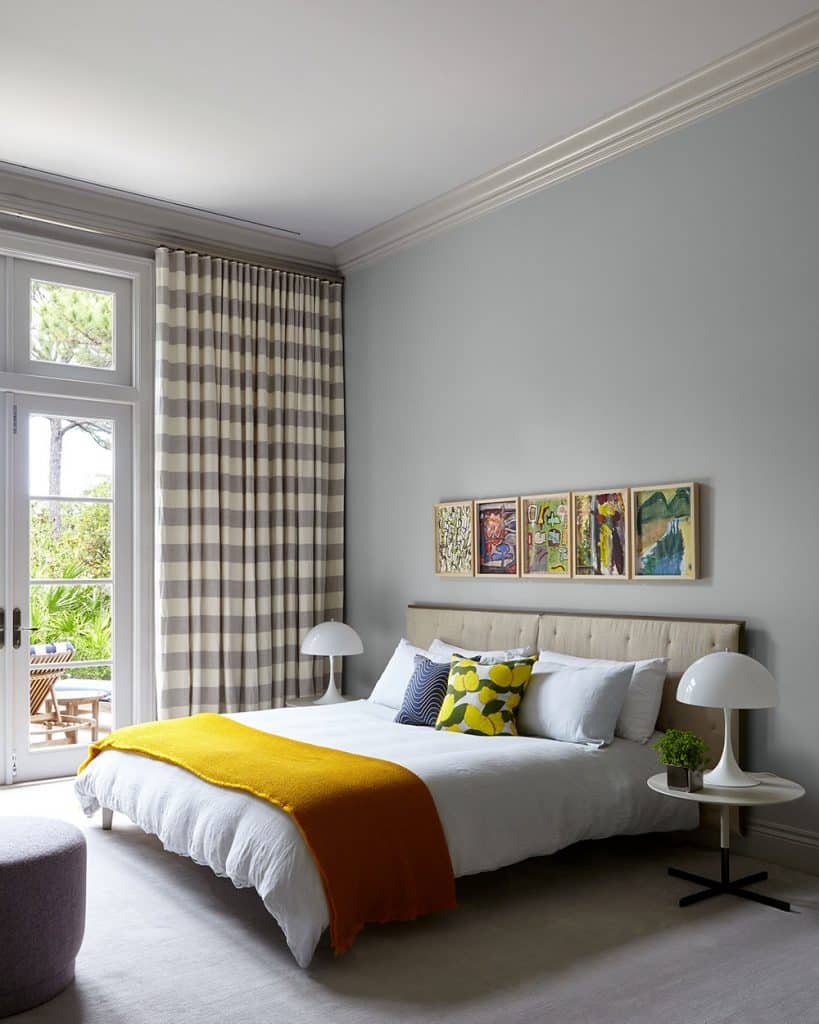 A row of untitled Jorge Fick works completed between 1970 and 1980 sits above a Grantorino king bed from Poltrona Frau in the Jupiter guest bedroom. The Bob end tables, also from Poltrona Frau, are topped by Panthella table lamps originally designed by Verner Panton for Louis Poulsen. 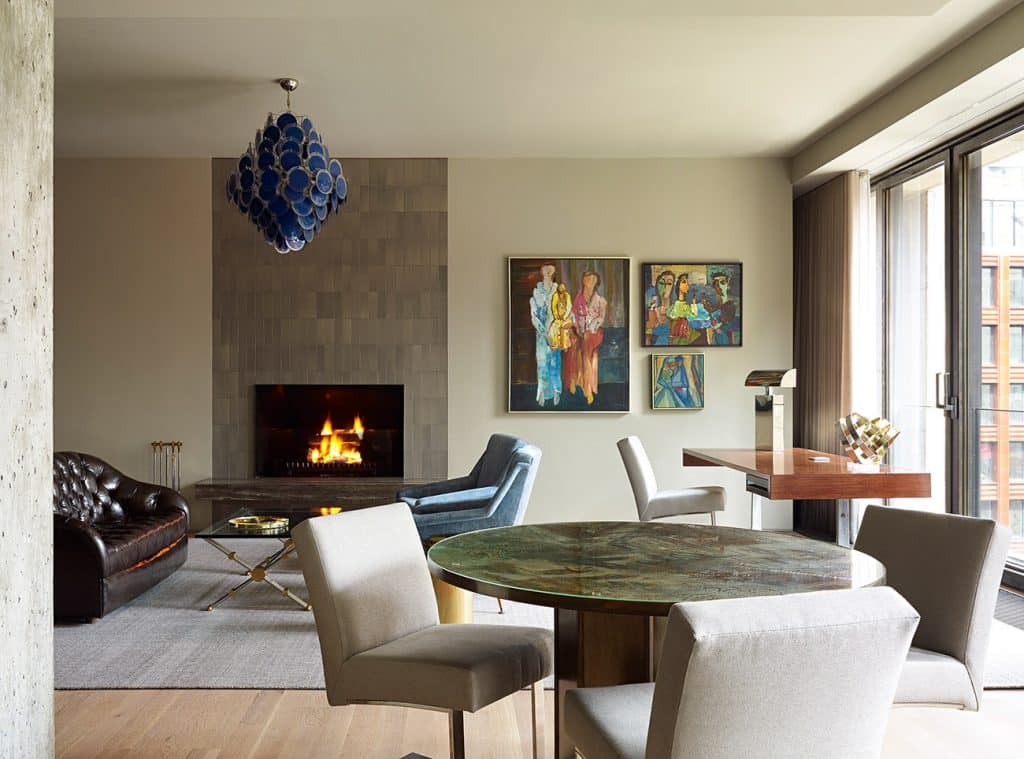 In a living room in Manhattan’s NoHo neighborhood, vintage pieces from Lobel Modern — including a Laverne game table, a set of Paul Evans for Directional Collection 77 chairs and a 1970 Ward Bennett button-tufted sofa — contribute to the retro vibe. The Vistosi Murano-glass chandelier is from High Style Deco. 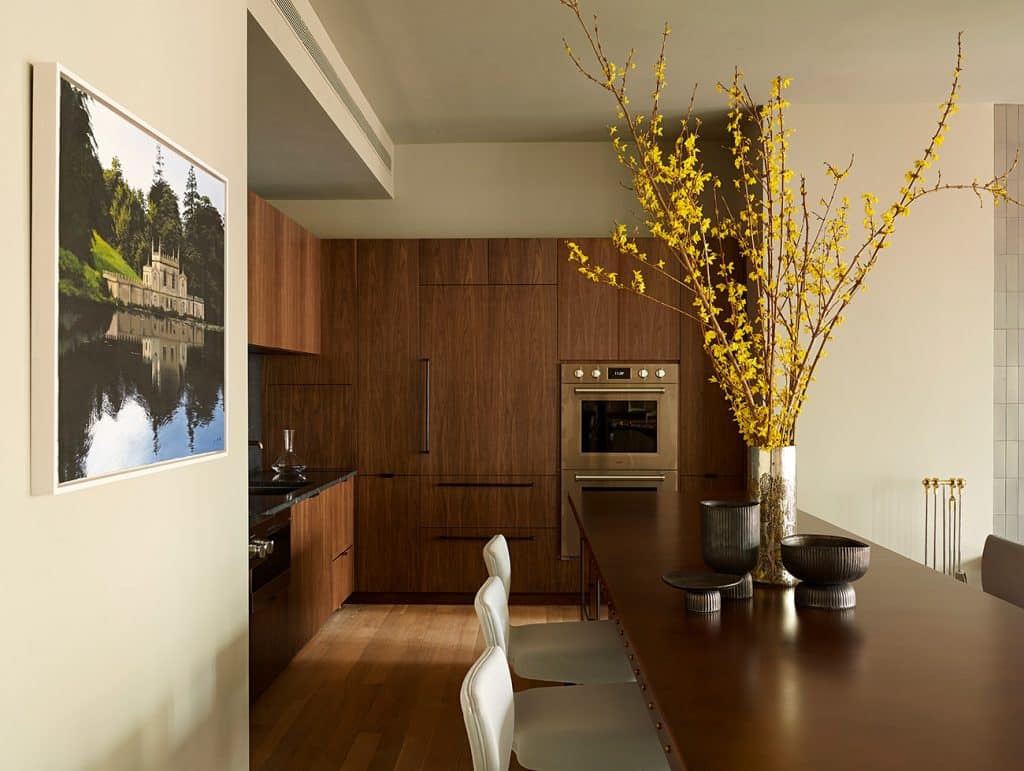 A long copper-topped kitchen island — designed by Frampton Co and inspired by the clients’ favorite local restaurant, Il Buco — pulls double duty as a dining table in the NoHo residence. The counter stools are from Roche Bobois. 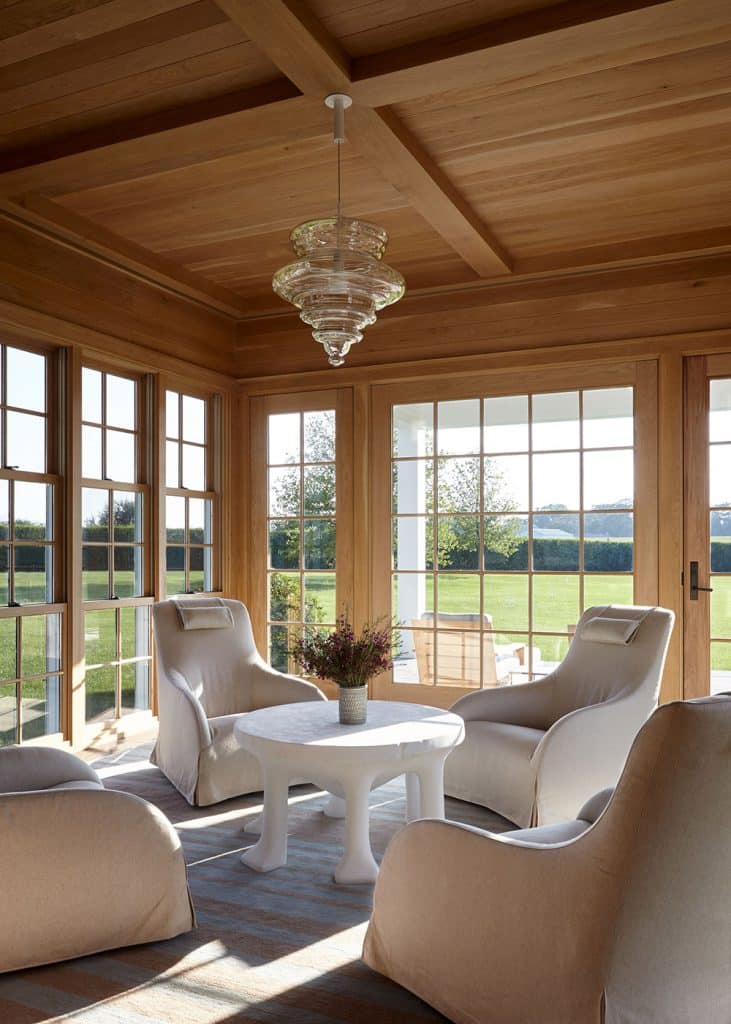 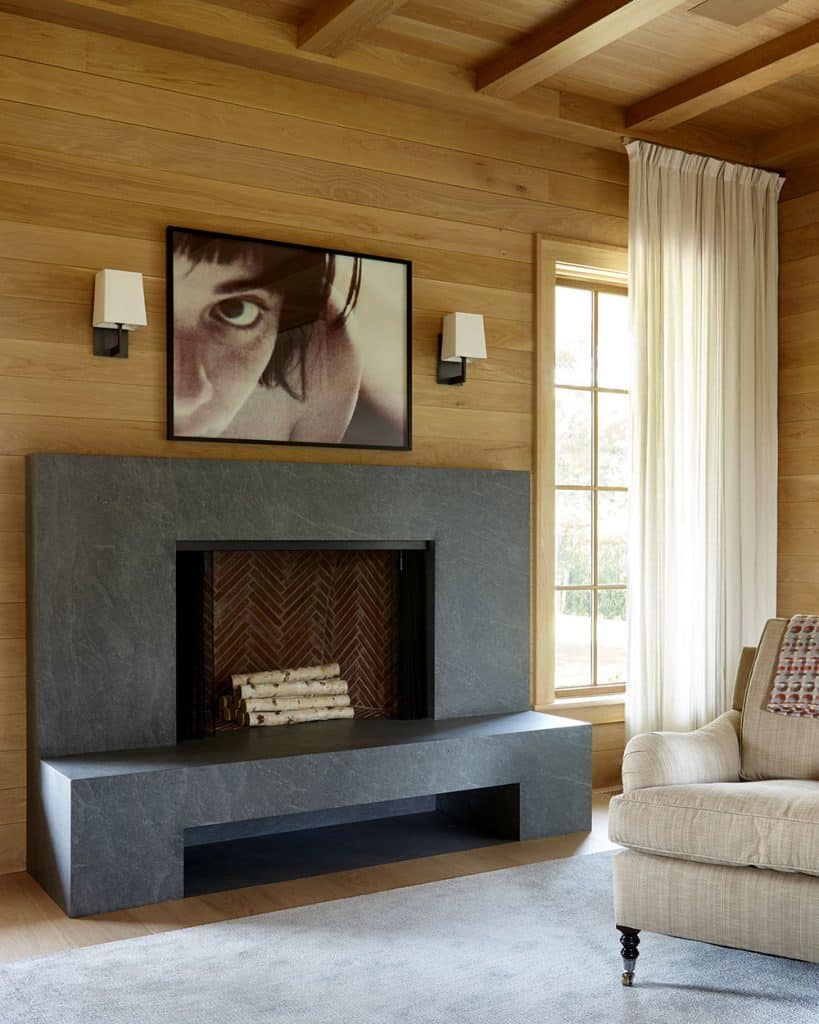 Nu, a 1999 photograph by Rebecca Bournigault, adds an enigmatic touch to a guest room at the Bridgehampton home. The mantel, made of Pietra Cardosa, has waterfall edges for a clean look and a cavity below for firewood storage. 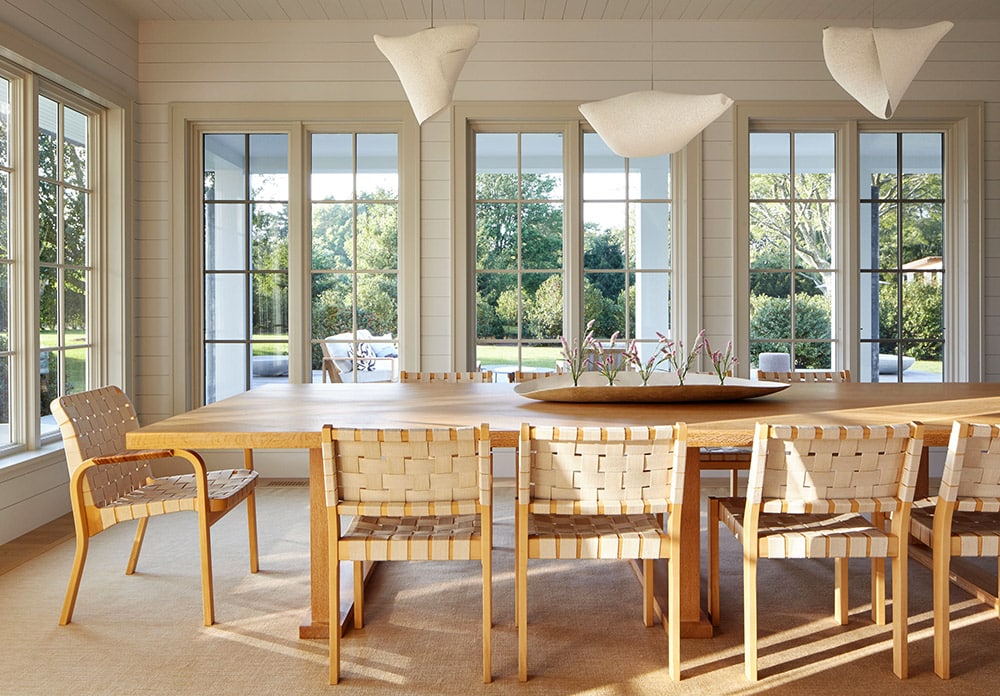 Ballet Releve ceiling fixtures by Arturo Alvarez seem to float above the Christian Liaigre dining-room table and chairs in Bridgehampton. 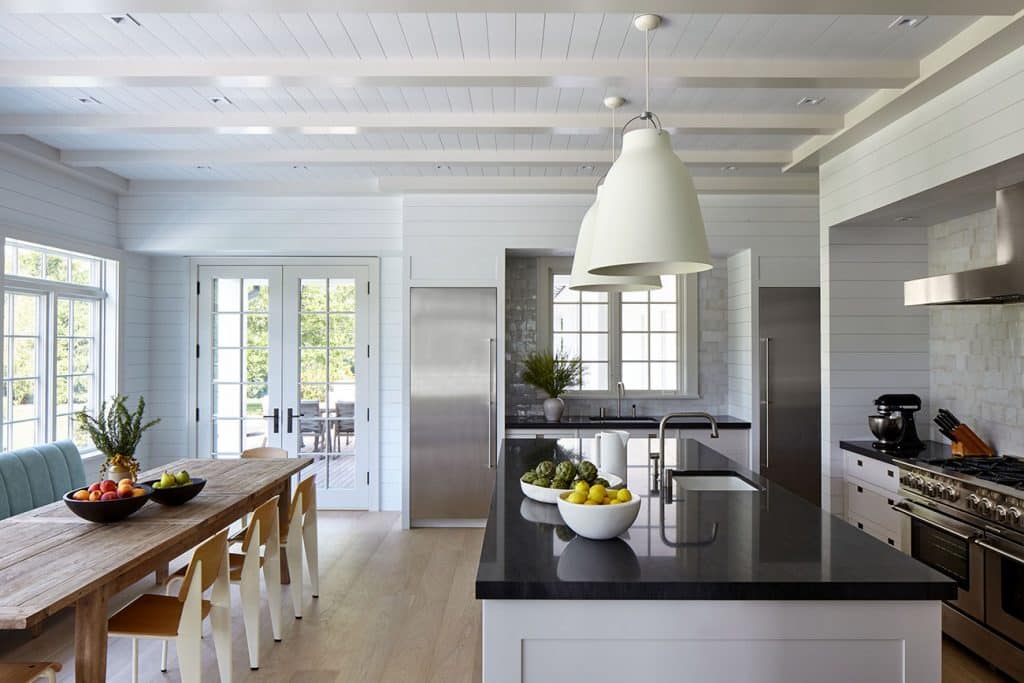 Wood paneling on the walls and ceiling, as well as backsplash tiles with an interesting finish, give texture to the Bridgehampton home’s white kitchen, while the wooden table from Restoration Hardware and Jean Prouvé Standard chairs from Minotti New York by DDC add warmth. The Caravaggio pendants are designed by Cecilie Manz for Lightyears. 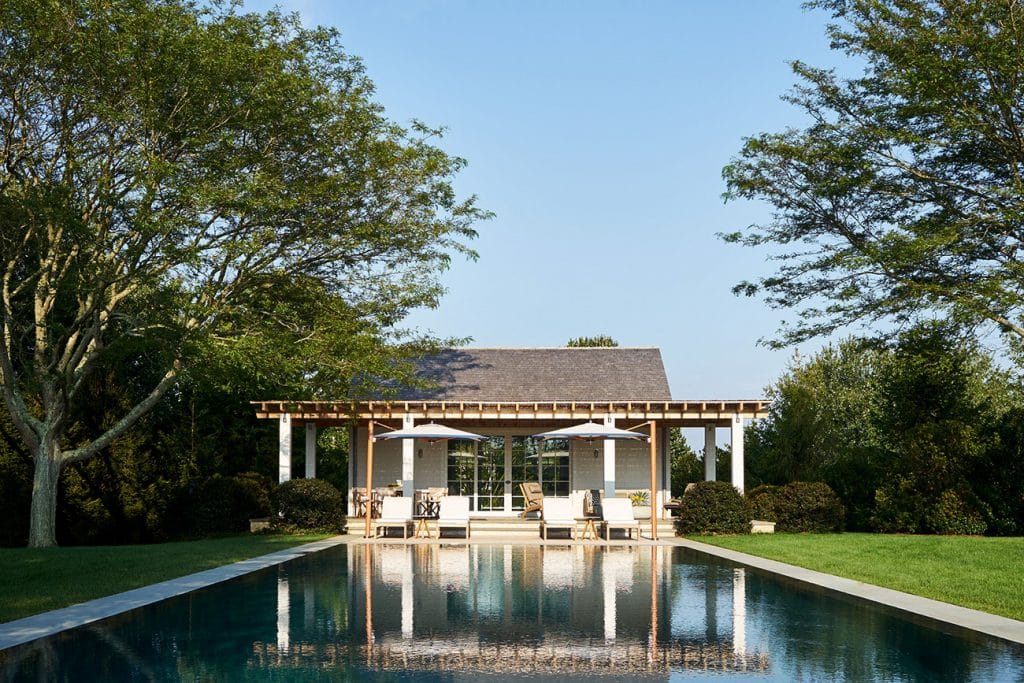 Large sliding doors at both the front and back of the Bridgehampton pool house maximize airflow and enhance the indoor-outdoor relationship. At the request of one of the owners, a dermatologist, umbrellas provide sun protection for the chaise longues.

A rigorous five-year program in the interior design department at Arizona State honed her talents and skills, prepping her for a summer internship with the late interior designer Naomi Leff, followed by a move to New York (“That was the dream,” she says) and five years with downtown designer Clodagh. “She’s ‘Forget about the drawing board — what is the experience?’ ” Frampton says. That segued into another five-year stint at the acclaimed architecture firm Tsao & McKown, where she learned “methodology and exactness and details.” For nine years thereafter, Frampton had a bicoastal design practice called Curated.

In its mere four years of existence, the 10-person Frampton Co has built an impressive portfolio of residential and commercial projects in New York City, Long Island, Florida and California. This month, the company will relocate to a penthouse floor in the Flatiron District twice the size of its current space, with windows on four sides and a rooftop terrace. “The new office will enable us to support what’s coming our way — larger projects, more product design, more hospitality work and residential work that includes custom art commissions, which are so integral to how we see space.” 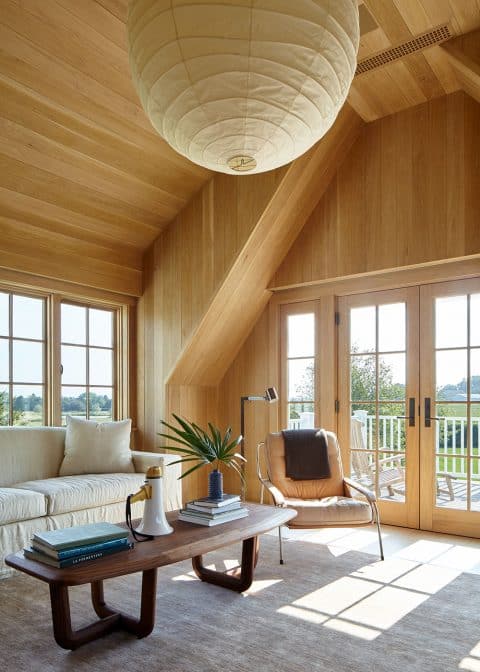 A leather chair from Minotti New York by DDC serves as a sunny window seat in the office of a Bridgehampton home. The pendant lamp is an Isamu Noguchi design; the Holy coffee table by Autoban for De La Espada is from the Future Perfect.

Frampton delights in helping clients get over what she calls their “intimidation about the art world,” most often with postwar or newly commissioned painting, sculpture and works on paper. Sometimes the pieces are large-scale, like the white and blue free-form fiberglass sculptures by Mia Fonssagrives-Solow on the lawn of a Jupiter, Florida, estate. “Against the pool and the palm trees and all the green, they change the whole experience of the grounds,” she says.

For the interior of that Mediterranean-style property, Frampton helped her clients select more than 80 works, from pieces by such postwar artists as Joe Overstreet and Miriam Schapiro to contemporary and newly commissioned ones by today’s talents.

She tamed the 17,000-square-foot floor plan by “strategically layering for warmth and intimacy, using colors that are vivid yet balanced — our calibrated version of resort modern.” The impeccably curated furnishings include vintage pieces by such giants of 20th-century design as Giò Ponti, Vladimir Kagan, Hans Wegner and Milo Baughman, along with contemporary standouts like the colossal mobile chandelier by David Weeks Studio in the main living space and a swoopy Seymour sofa from Minotti New York.

Another recent project, a 4,500-square-foot Flatiron loft, was “a football field of a space,” the challenge being “how to map it out so it didn’t feel too vast.” She did it by layering materials and defining volumes. The dining room in the middle of the loft was a particular concern. Over the table, Frampton hung two huge hemispherical light fixtures by Hivemindesign, which became “like a ceiling,” creating coziness where before there was none. 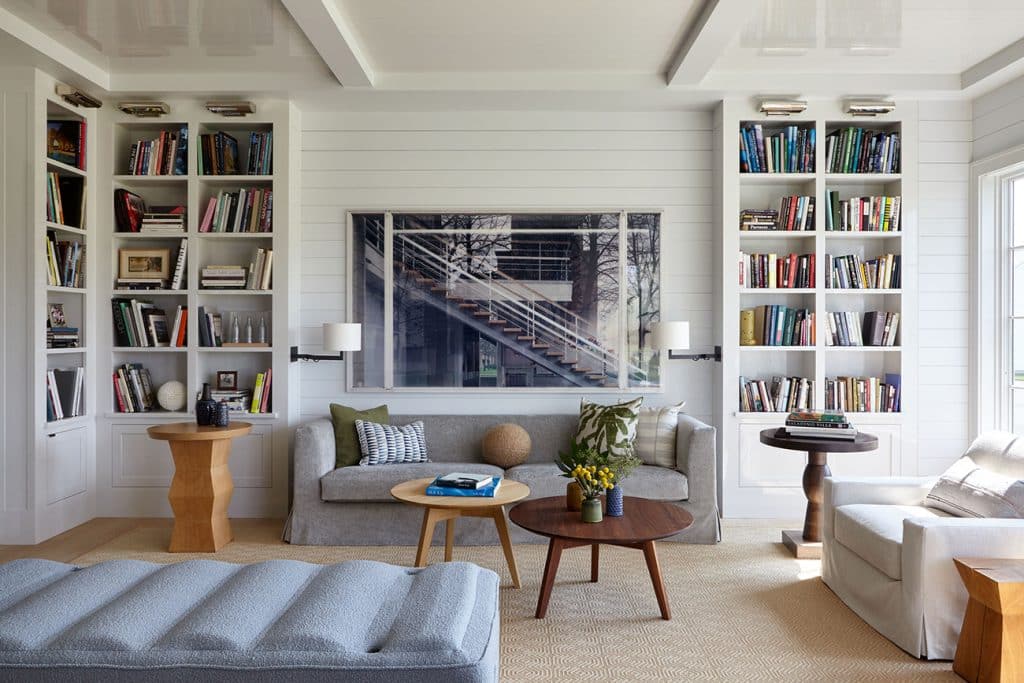 A photograph from the client’s collection overlooks a Holly Hunt sofa in the living room of the Bridgehampton property. The pair of coffee tables is by Kate Duncan.

She pulled out the stops at a recently completed waterfront residence in Southampton. “We amped it up,” Frampton says, “with art and a mix of vintage and new furniture,” including vivid, oversize abstract paintings, Paul Evans swiveling armchairs, a Karl Springer coffee table with gold-colored columnar legs, an emphatically yellow ceramic sculpture by Danish artist Merete Rasmussen and a pair of Vico Magistretti’s 1980s three-seated Veranda sofas, each composed of a trio of swiveling and fixed armchairs. “Just because it’s a beach house,” Frampton points out, “doesn’t mean it has to be vanilla.” 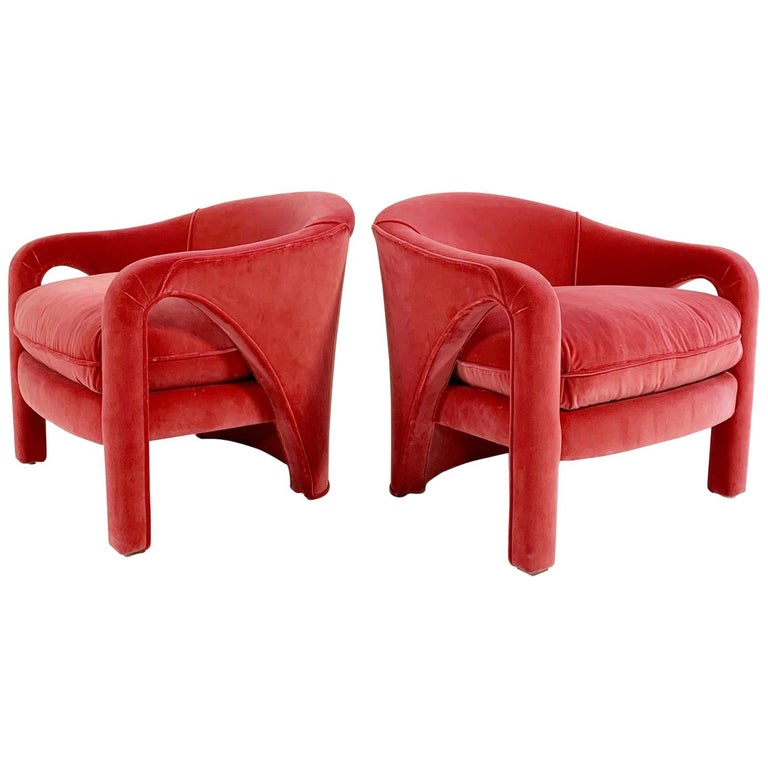 “We’re always on the hunt for unique, shapely and comfortable chairs. These look great from all angles, especially ‘floating’ in a space.” 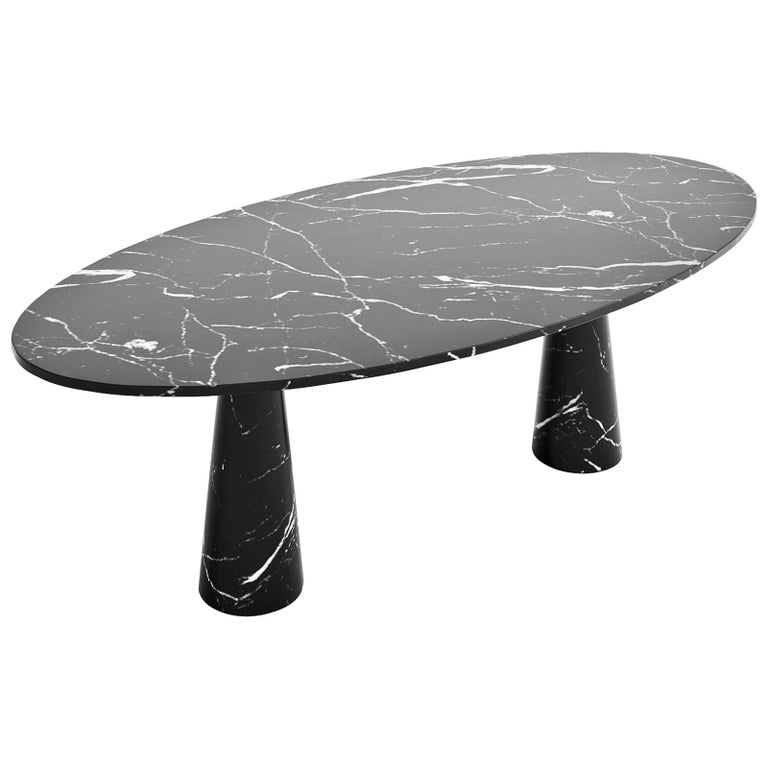 “The minimal yet bold form of this table is compelling, whether on its own or surrounded by chairs.” 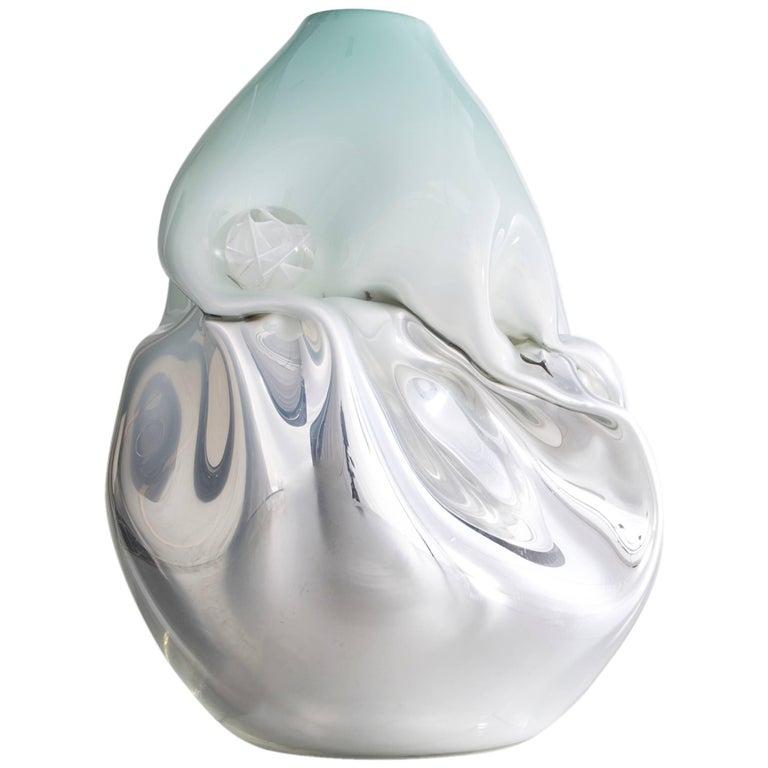 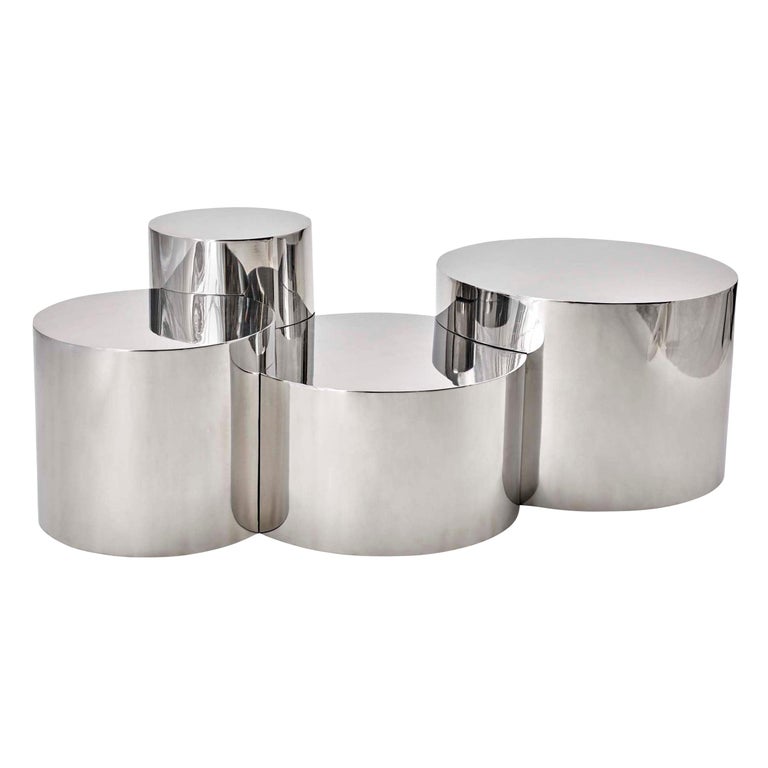 “We love the way the sculptural form and polished finish of these cocktail tables hold their own in any room.”

“Textured, earthy and nautical, these are absolutely the perfect side chairs for a Hamptons house.” 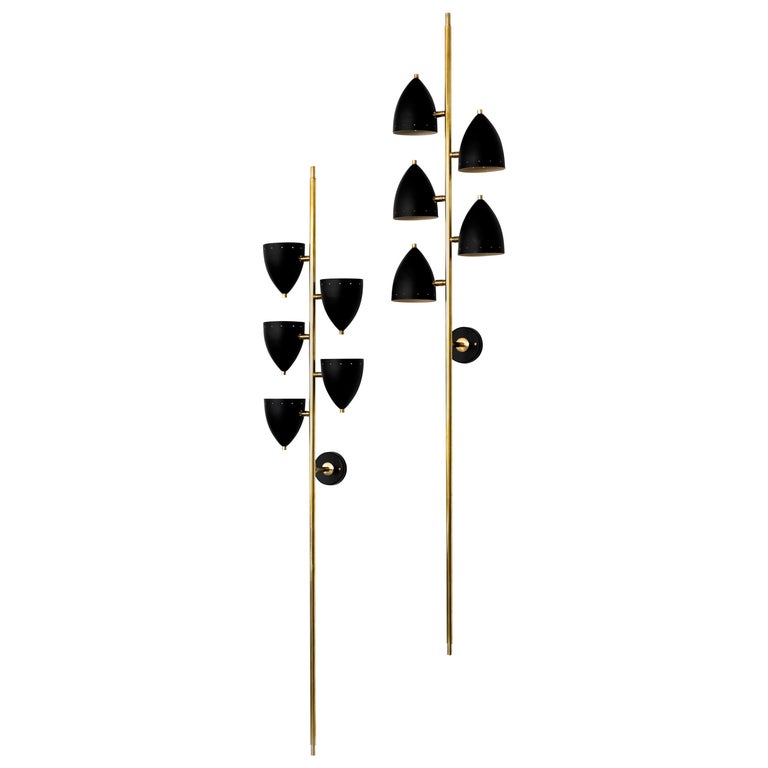 “We always go for a black accent, and these stylish overscale sconces really bring it.” 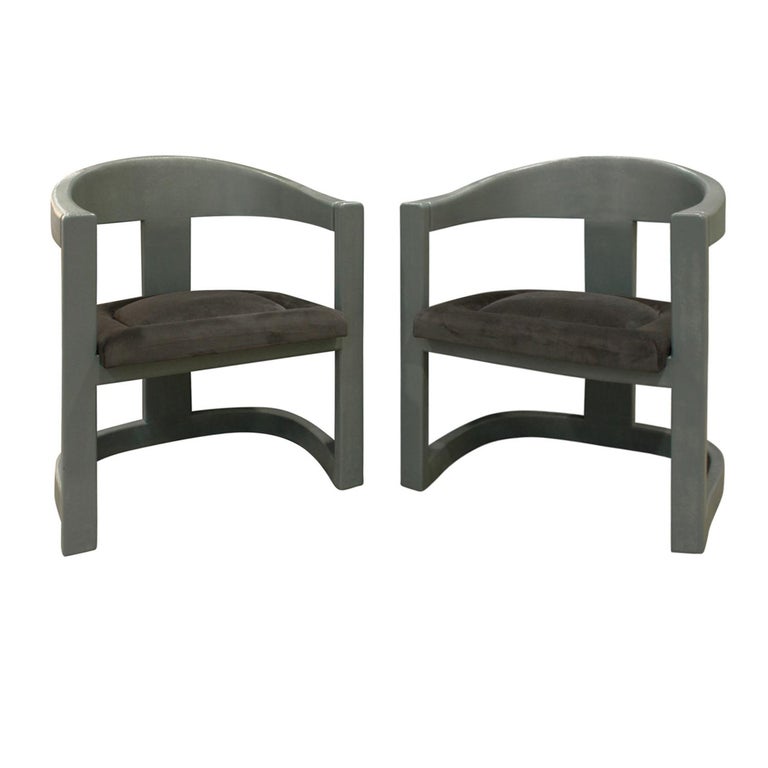 “Karl Springer–designed furniture is a versatile basic for us: modern, curvy and bold.” 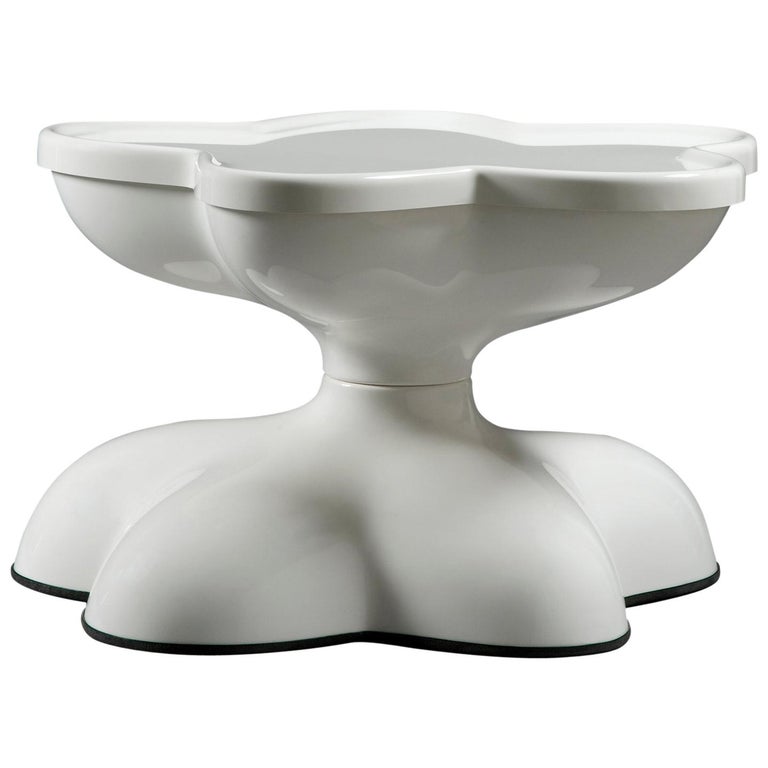 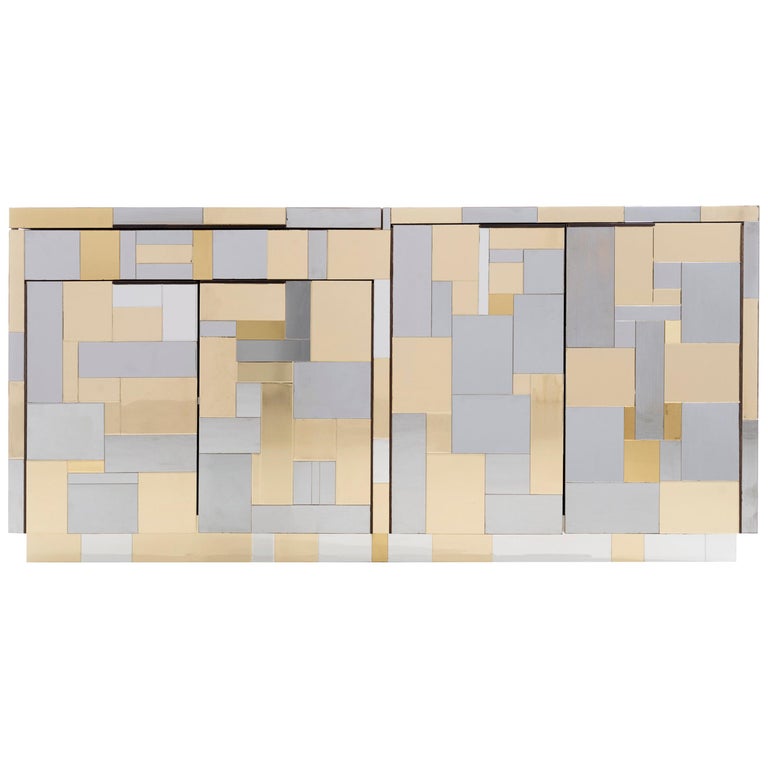 “We love mixing metal finishes — no matchy-matchy for us. Paul Evans’s Cityscape line is a beautiful expression of that.” 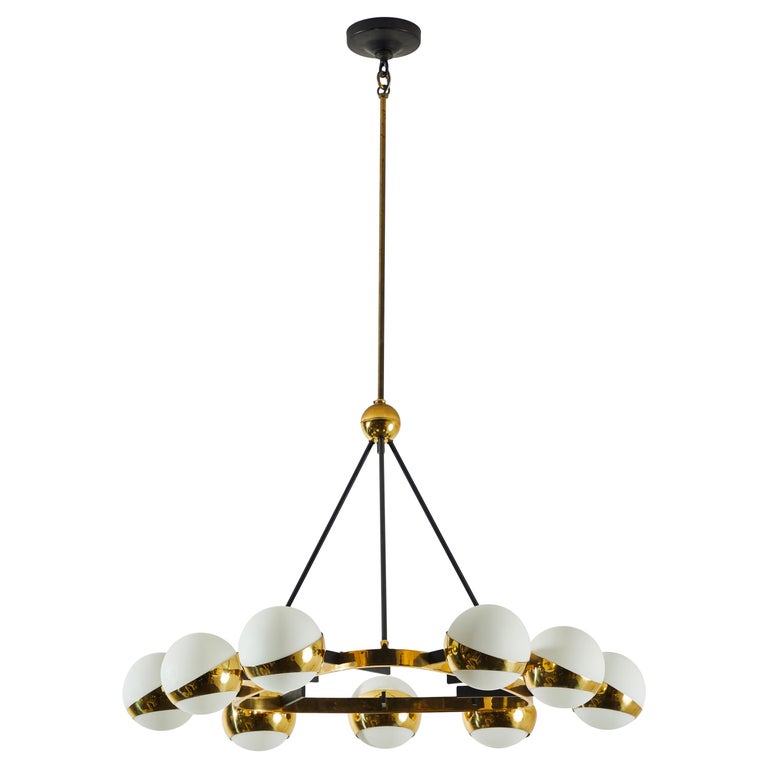 “Vintage chandeliers are one of our trademarks, and Italian Stilnovo is a regular 1stdibs search.”