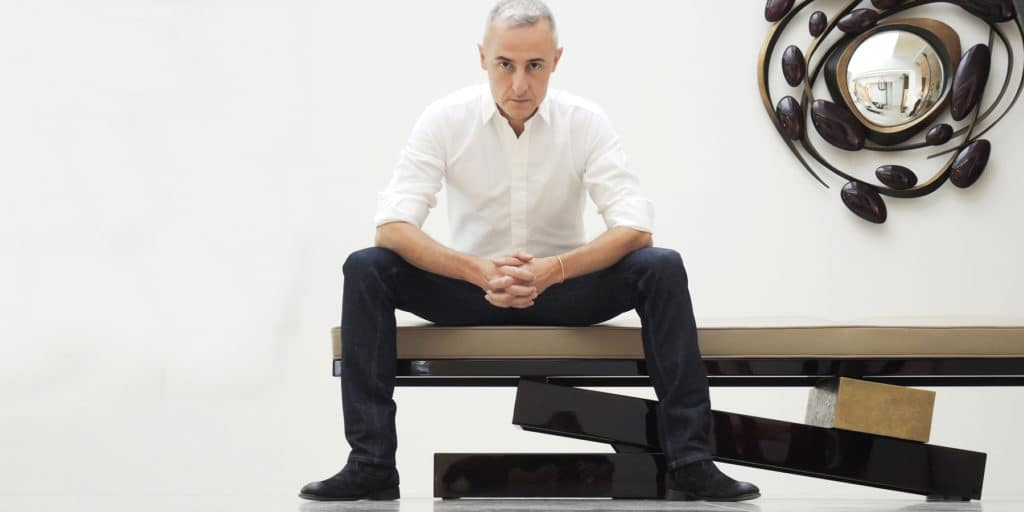 The French furniture and jewelry creator, whose clients include celebrities and fashion luminaries, focuses on fun and ignores trends. That approach is paying off. 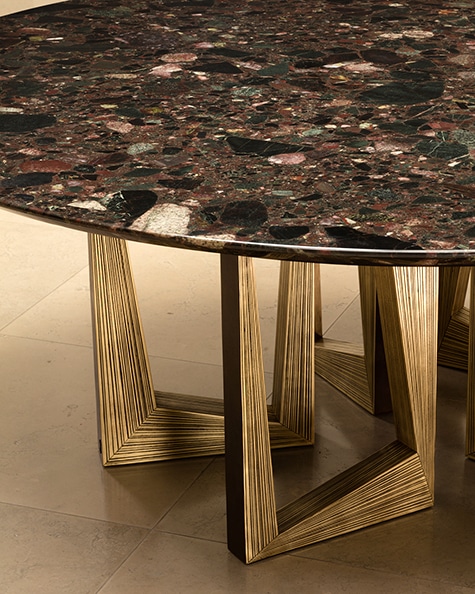 February 13, 2017French aesthete Hervé Van der Straeten has won a devoted, and high-flying, following for his luxe-contemporary fine-design furniture, like the Interference table, 2015, above, which combines fossilized wood, blackened pearwood and a bronze patina. Top: Van der Straeten sits atop his Jet Lag banquette, 2013, in front of his Tumulte mirror. Portrait by Jo Magrean; all other photos by Cécil Mathieu, unless otherwise noted

Ask French furniture designer Hervé Van der Straeten which of his creations is his favorite, and he’ll mention 2003’s Empilée console. Its base consists of a higgledy-piggledy, zigzag-like arrangement of lacquered wooden planks held in equilibrium by a series of textured-bronze wedges. “On one hand, it’s a rather nonchalant object,” he notes. “The different elements look as if they’ve been piled randomly on top of each other. Yet, at the same time, it’s very precise. It encapsulates the characteristics of my work quite well.”

Van der Straeten’s style is difficult to define. As he himself points out: “It’s about opposites.” His designs range from lyrical mirrors sprouting branches and lamps with duck-like legs to rigorous rectilinear credenzas and lamps with bases made from interlocking rectangular blocks. The Givre chandelier, 2006, made with rock crystal, looks a touch medieval, while his Fever table, 2008, lacquered with a marbled motif in orange and sky blue tones, is quasi-futuristic.

Yet, to Van der Straeten’s mind, there are some common traits. “In a lot of my pieces there’s a sense of visual intrigue,” he says. “You don’t quite know how everything is held together.” He likes it when things are slightly off-kilter and often incorporates the notion of accumulation, repetition and multiplication into his designs. His inspirations are vast. Among them, he lists the villas at Pompei, the Château de Fontainebleau, Mies Van der Rohe’s Barcelona Pavilion and Art Deco designer Émile-Jacques Ruhlmann. A lot of his recent designs have also been inspired by origami, including his Aomitsu chandelier, 2015. “I’ve always been influenced by the pared-down aesthetic and quality of the craftsmanship in Japan,” he says of a country he’s traveled through extensively.

Among his fans, the designer counts many of the world’s leading interior designers, such as Muriel Brandolini, Tony Ingrao, Yves Taralon and Jacques Grange, who has one of Van der Straeten’s Fever tables in his office. “I love his inexhaustible creativity, his fantasy and sense of quality,” affirms another devotee, New York’s Robert Couturier. “He has a very elegant eye and a perfect sense of proportion.” Adds French decorator Jean-Louis Deniot: “His strength lies in the fact that he seems to do what he wants. He doesn’t care about fashions or trends.” Van der Straeten himself affirms that his approach is not purely commercial. “My primary objective is to have fun,” he insists. 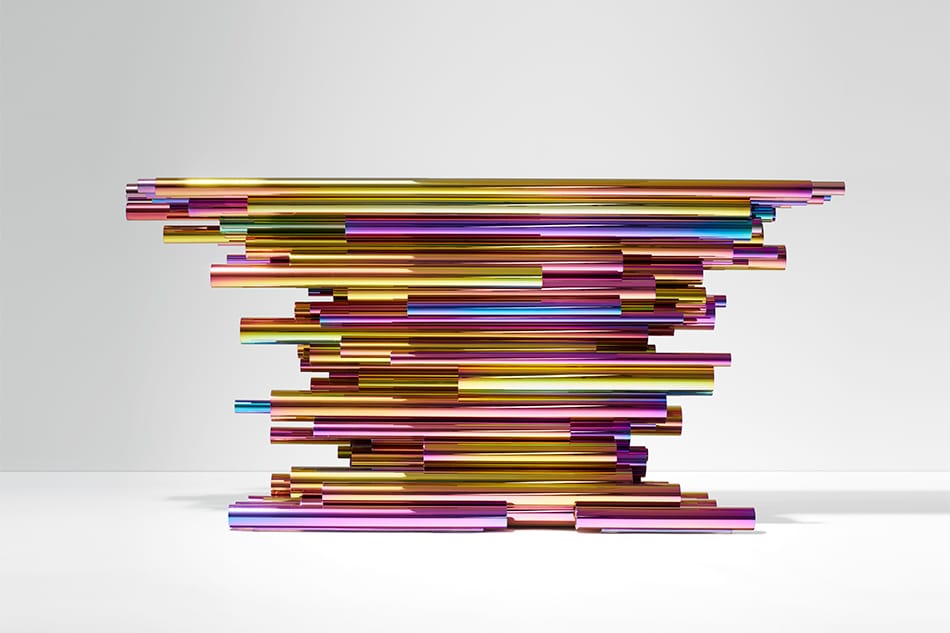 Console Pipe Show, 2016, made of stacked polished and varnished brass tubes, is typical of many of Van der Straeten’s works, which create beauty out of an arrangement of elements that may at first seem random but is in fact very precise. “It’s about opposites,” says the designer. 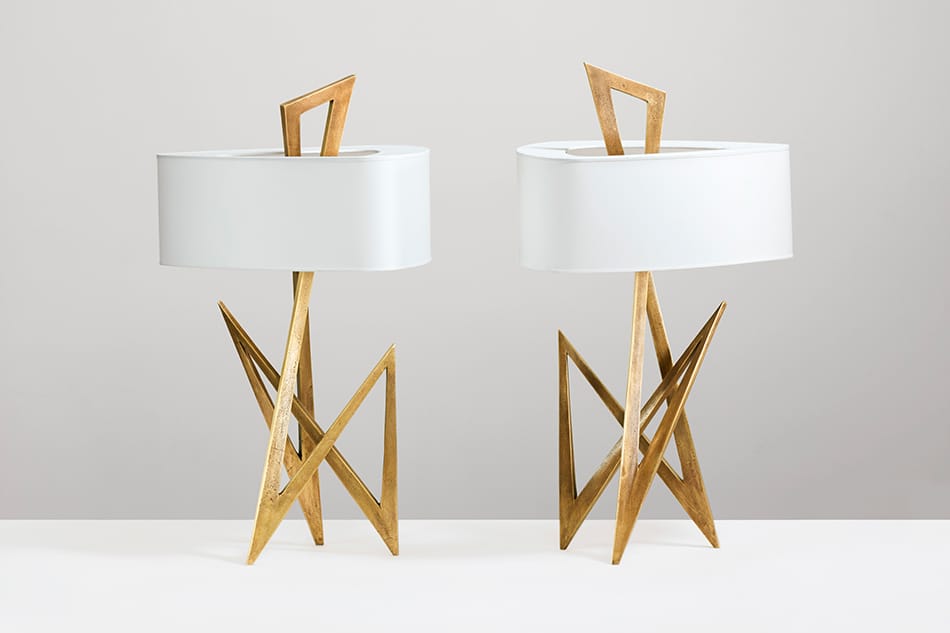 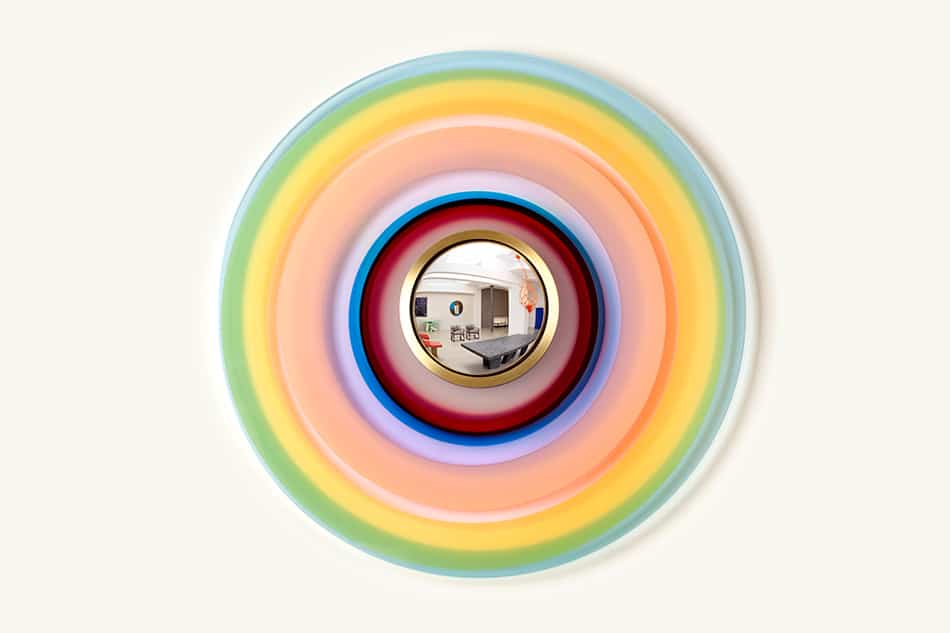 The Lollypop mirror, 2012, takes its name from its candy-colored frame. 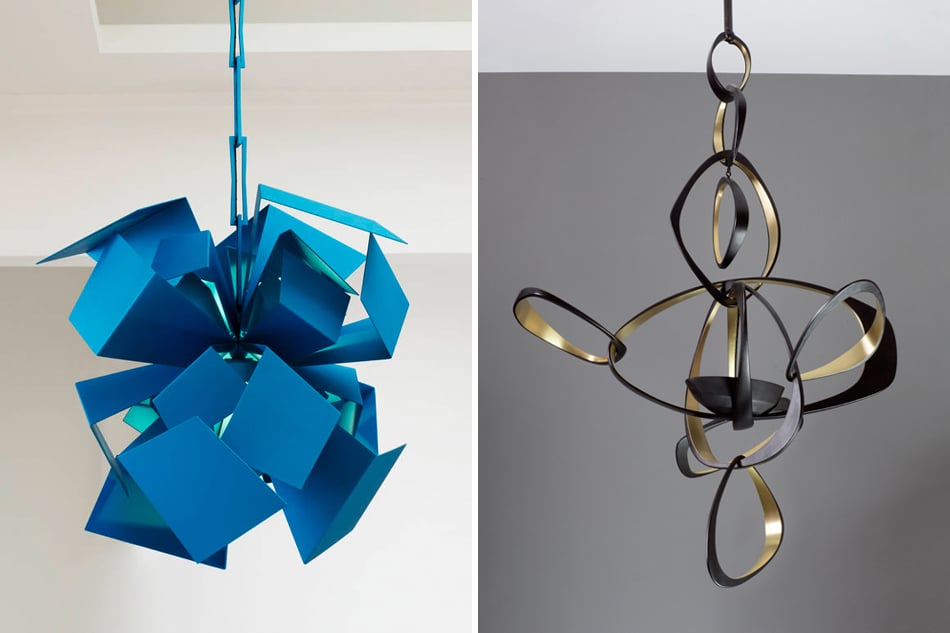 Left: Japanese origami has inspired the design of some recent Van der Straeten pieces, including the anodized blue aluminum Aomitsu chandelier, 2015, which he produced in an edition of 60. Right: The black and gilt patinated-bronze Volubile chandelier, 2014, also had a 60-edition run. 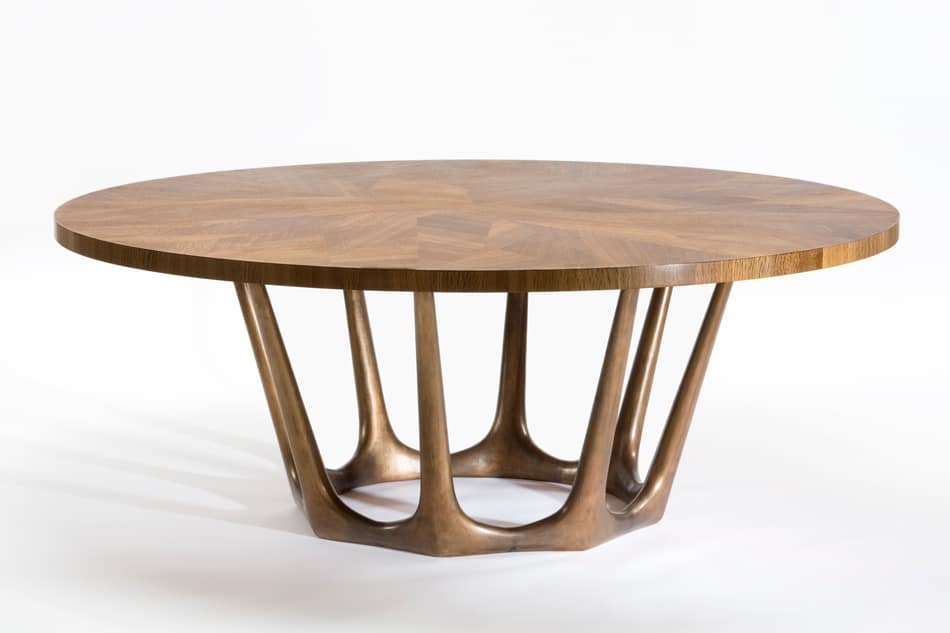 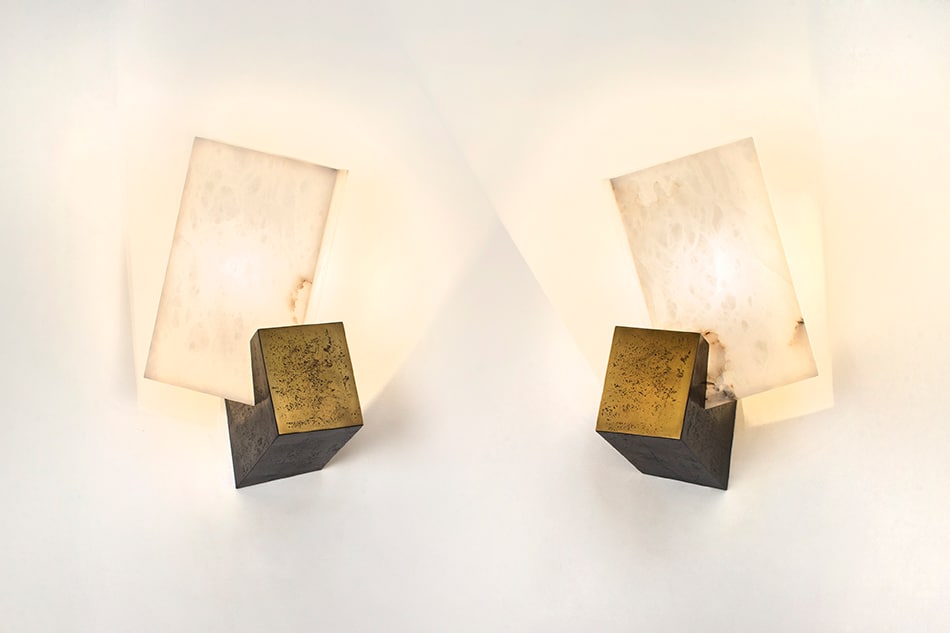 For the Pirouette sconces, 2012, he combined alabaster and patinated bronze in a pair of geometric, slightly off-kilter wall fixtures. 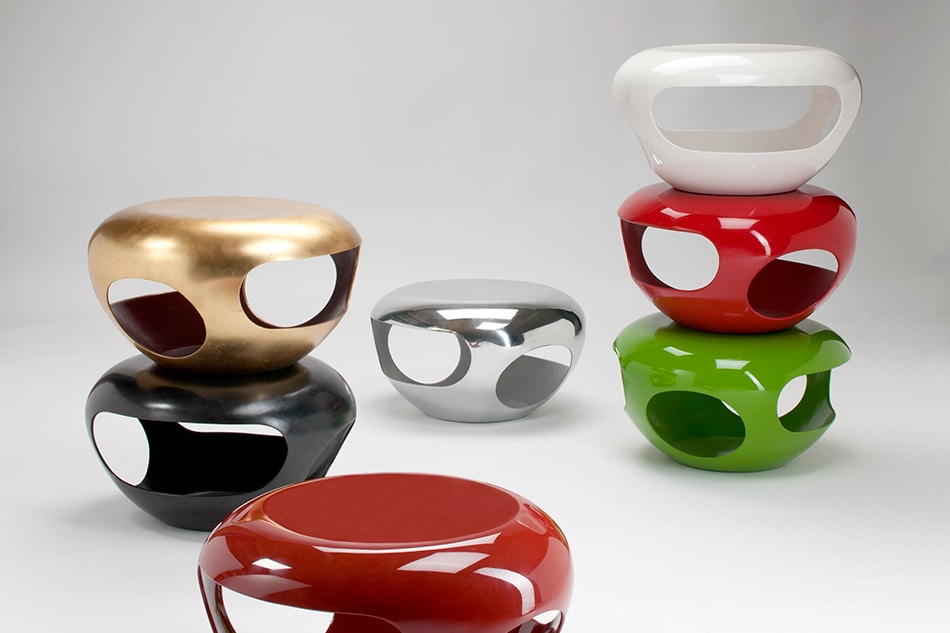 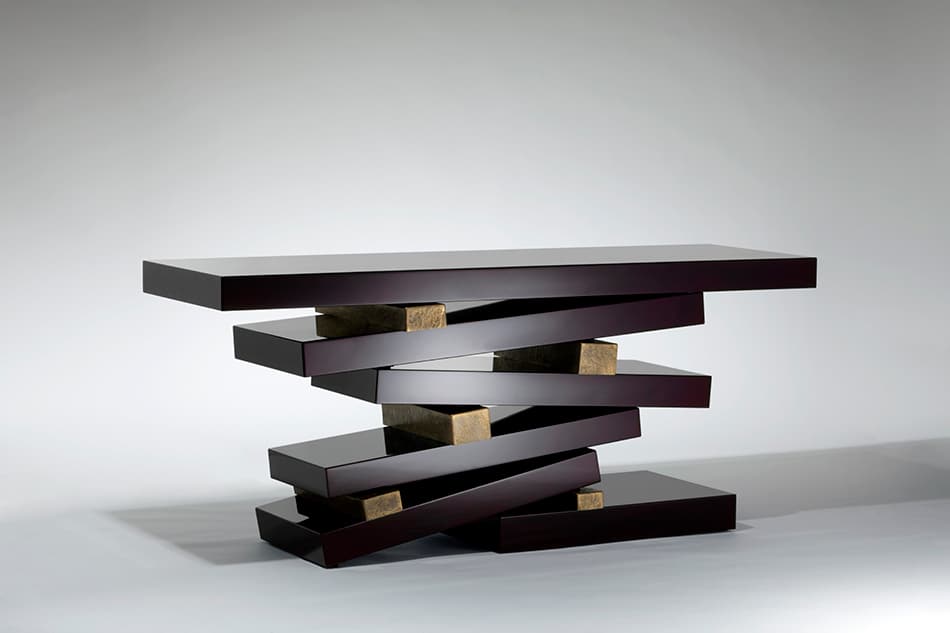 “On one hand, it’s a rather nonchalant object,” Van der Straeten says of his Empilée console, 2003. “The different elements look as if they’ve been piled randomly on top of each other. Yet, at the same time, it’s very precise. It encapsulates the characteristics of my work quite well.” 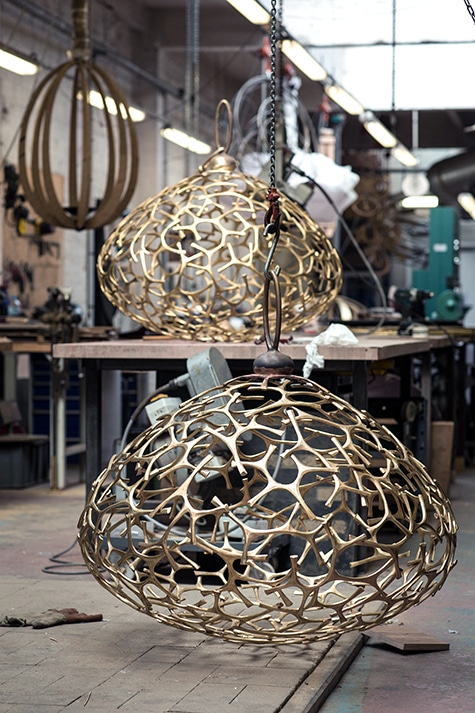 For the past decade or so, Van der Straeten has worked from ateliers in a former electrical components factory in the Paris suburb of Bagnolet. Here, two in-process editions of his patinated-bronze Micmac chandelier, originally designed in 2010, rest on the floor and on a table.

Born in 1965 in Savigny-sur-Orge, to the south of Paris, Van der Straeten studied painting at the École des Beaux-Arts in the French capital, but while there, he began to design and make jewelry. His first pieces, created from black rubber elements and brass wire, brought him immediate success. “It was like a whirlwind,” he recalls. “All of a sudden, I found myself with ten employees, an agent in New York, another in Tokyo and a PR in London.”

In 1985, Thierry Mugler selected several of his designs for a fashion show. Later, Van der Straeten created a helmet from Japanese coins for Alexander McQueen during a Givenchy haute couture show and necklaces made with elements shaped like golden rhinoceros teeth for Christian Lacroix. Clients for his pieces have included Demi Moore, Janet Jackson and Cate Blanchett.

Today,Van der Straeten designs jewelry only sporadically. “I no longer follow the rhythm of two collections per year,” he says. “For me, jewelry was more like a parenthetical. What I always wanted to do was to design furniture.” He launched his first line of objects (candlesticks, sconces, dishes and more) in 1992. “What I like about working in the decorative arts is that things are made to last, whereas in fashion there’s a kind of frenzy and haste that doesn’t suit me,” he explains. In 1999, he was commissioned by Christian Diorto create the now-iconic perfume bottle for J’Adore. Among his other designs are the packaging for Guerlain’s KissKiss lipstick, glassware and chandeliers for Crystal Saint-Louis and tableware for Bernardaud.

However, Van der Straeten’s focus today is very firmly on his furniture collections, which are sold in the United States through both Ralph Pucci and Maison Gerard. He opened his own showroom in the Marais district of Paris in 1999 and six years later established ateliers in a former electronic components factory in the suburb of Bagnolet. Today, almost 30 employees work in the 17,000-square-foot space. “When I moved in, it was enormous, but very quickly it became too small,” he recalls. He is currently thinking of looking for new premises. “It’s a bit of a maze here,” he explains, “and there are steps between the different buildings, which is not practical when you have a cabinet that weighs nearly nine hundred pounds!” 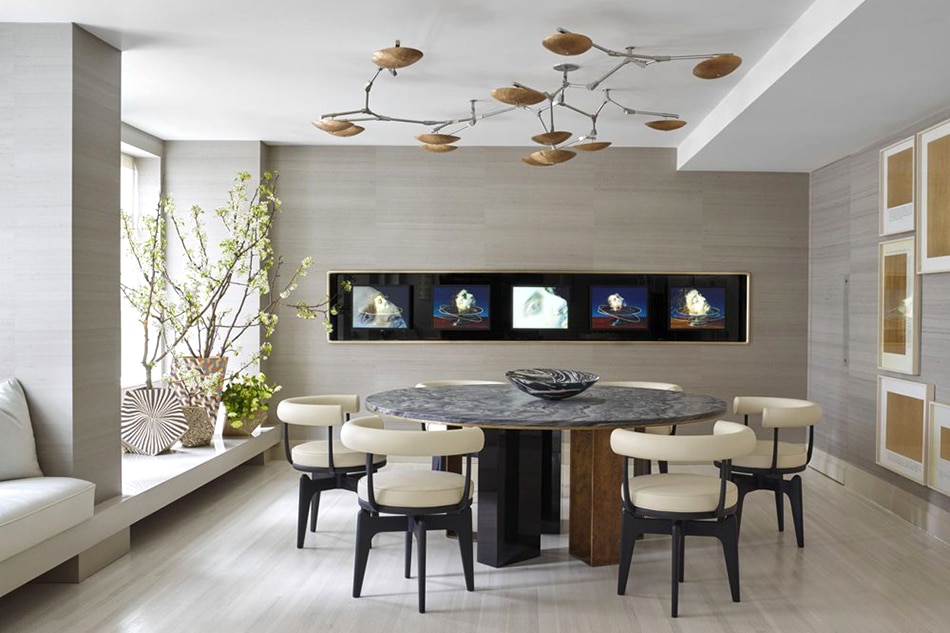 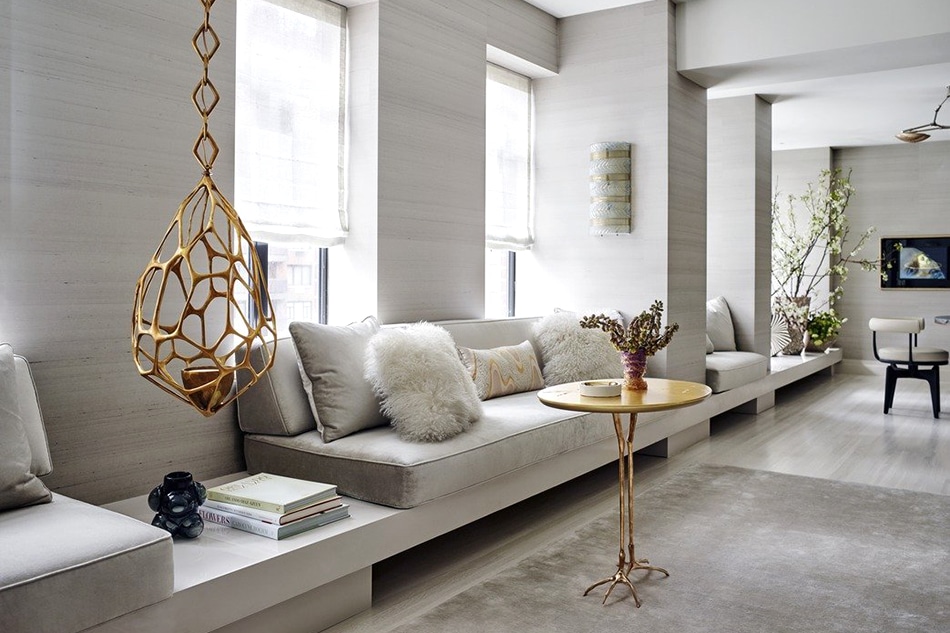 Behun hung an A Facettes No. 283 chandelier, 2014, in the living room of the same apartment. Photo by Richard Powers 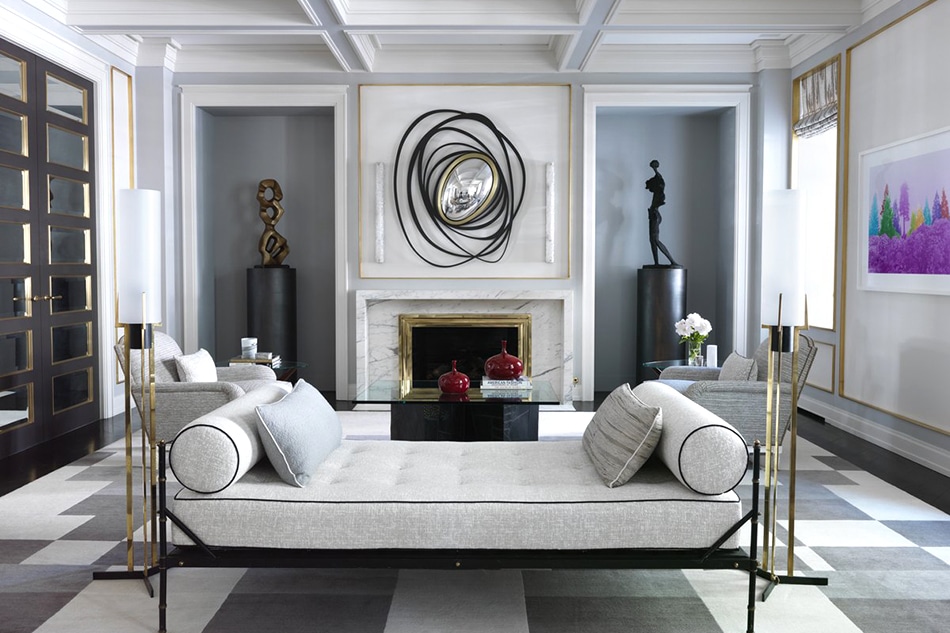 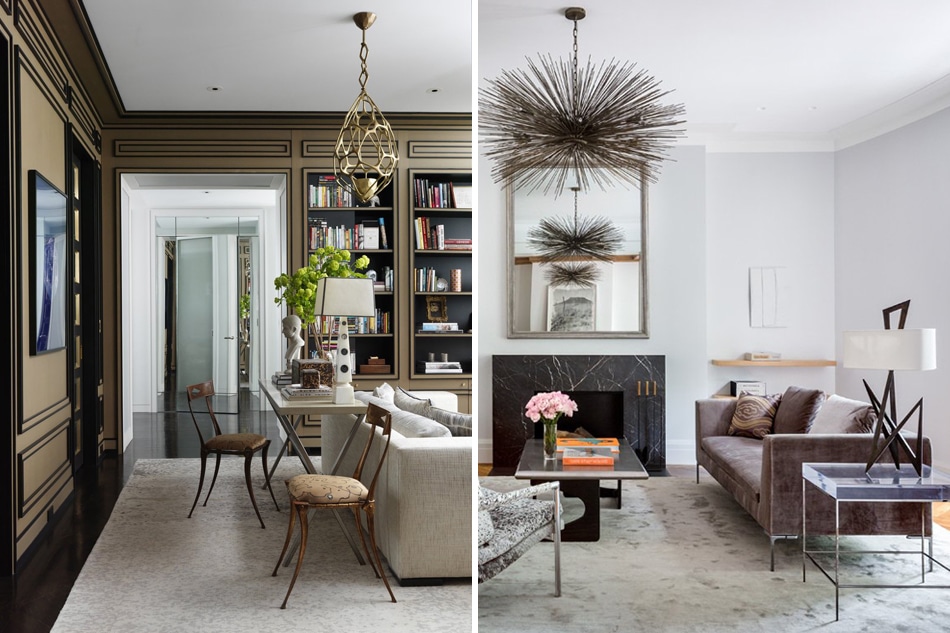 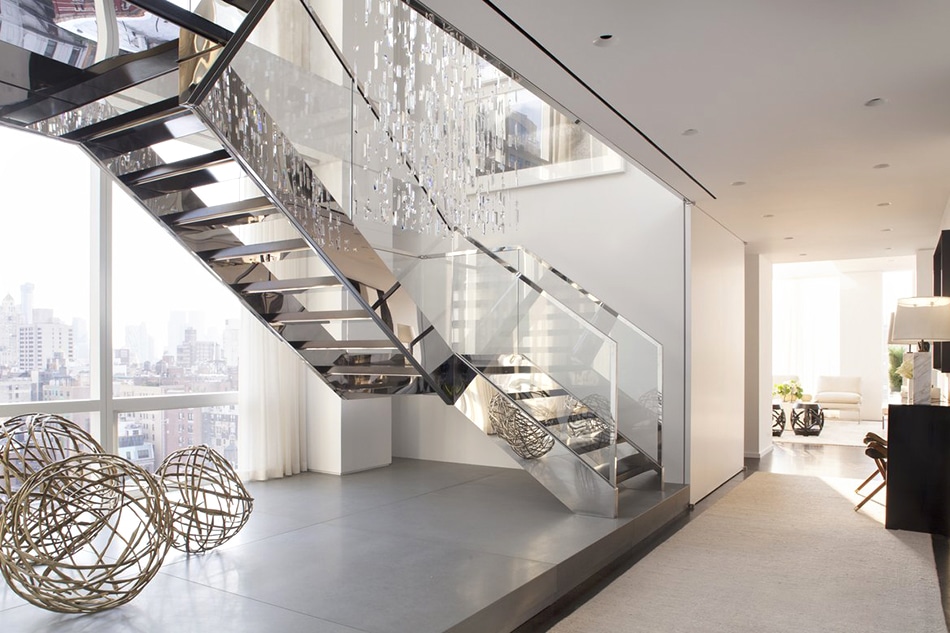 Russell Groves, of Groves & Co., placed Van der Straeten’s Coupe Nid floor coupes, 2011, under the staircase of the penthouse of the Lucida, a luxury building on New York’s Upper East Side. Photo by Max Kim-Bae 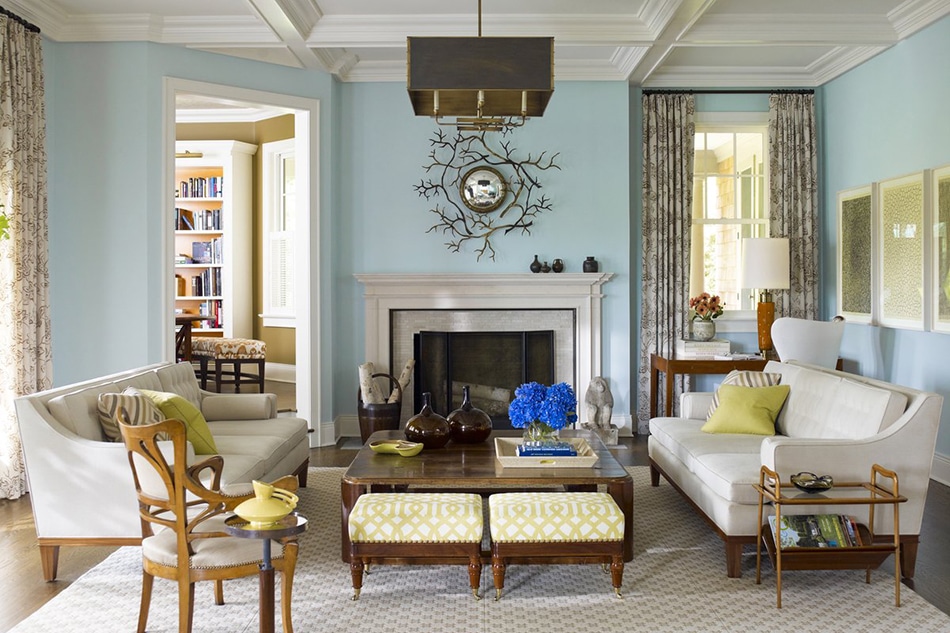 In the Long Island vacation home of designer Gideon Mendelson, which he created with his firm, the Mendelson Group, Van der Straeten’s Branches Bullseye mirror, 2006, adorns a wall over the fireplace. Photo by Eric Piasecki 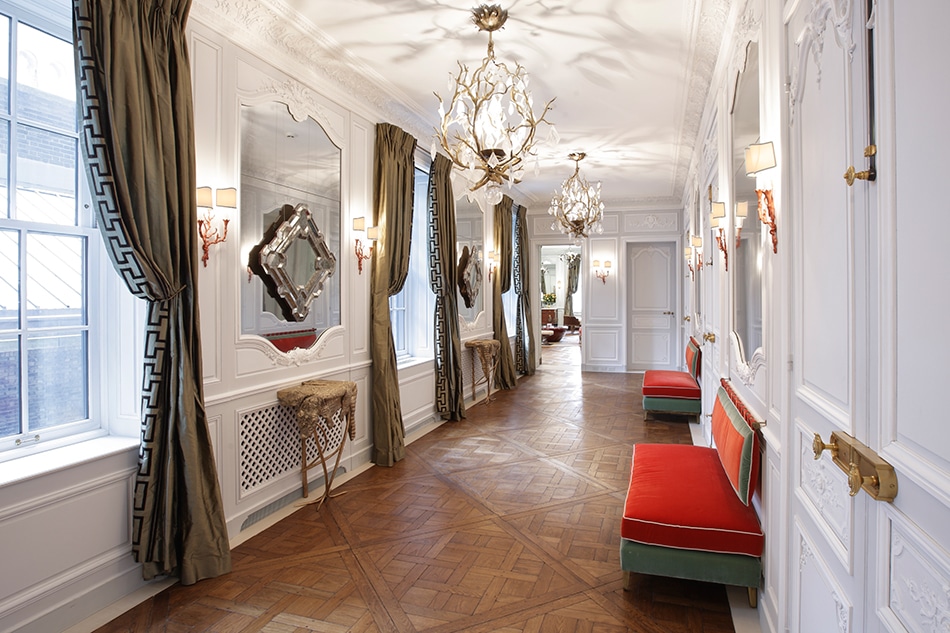 “He has a very elegant eye and a perfect sense of proportion,” New York designer Robert Couturier says of Van der Straeten, whose bronze and crystal branching chandeliers he used in the foyer of an apartment on New York’s Fifth Avenue. Photo by William Abranowicz 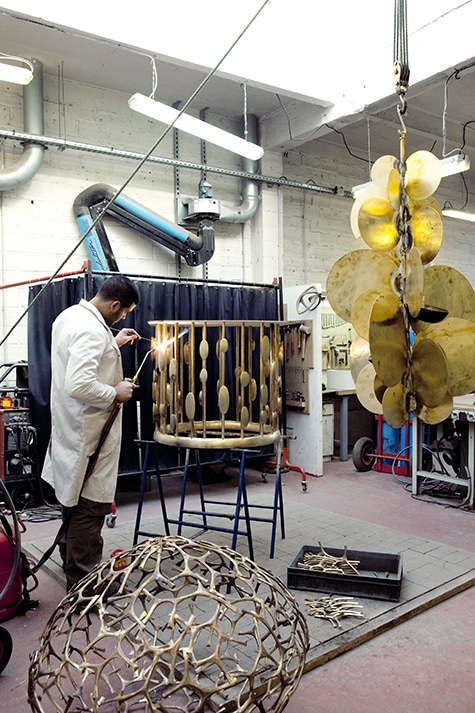 One of Van der Straeten’s artisans works on the bronze base of a Modulation table, 2010, which will eventually be completed with a spectrolite top. In the foreground is another Micmac chandelier, and at right is the Lustre Pastilles chandelier, 2010, which is made of golden-brown patinated brass, bronze and crystal.

During my visit to the workshop, a 13-foot-high chandelier was being assembled in the bronze workshop. Next door in the woodshop, one of the carpenters was sorting through some of the hundred or so thin slices of end-grain wood that were to be applied to the doors of his Saturation cabinet. Nearby stood a Bubblegum dining table, being made for Brandolini, with an intricate oak marquetry top. Van der Straeten meticulously inspected the finish.

“He’s a total maniac about quality,” Brandolini explains.  “I mean, it’s unbelievable. You can flip a piece upside down, and it’s simply perfect.” His lead times vary from three months for a lamp to 18 months for one of his more exceptional creations. The latter group includes cabinets that incorporate panels from the vintage Chinese lacquer screens that he regularly buys from Nicole Brugier, the Parisian lacquer expert.

Van der Straeten’s success is partly due to the fact that his creations are highly versatile. They sit just as happily in a classical interior as in an avant-garde one. “The materials pertain to the past, while the forms relate to the present,” he notes. He often adopts traditional techniques, such as marquetry, and gives them a modern twist. He also loves treating quotidian industrial materials, like steel rods, as if they were precious. He points to his Propagation console, 2012, made from Plexiglas blocks. “Each one is polished and repolished, and you can’t see any of the joints,” he says.

Every year, Deniot acquires one or two new Van der Straeten pieces. “I consider them to be lucky charms in each of my homes,” he asserts. “In thirty years time, even the price of the work of François-Xavier and Claude Lalanne will pale into insignificance compared with Hervé’s.”

Brandolini concurs: “He’ll become a classic for sure, on the same level as the important designers of the twentieth century, like Ruhlmann, André Arbus and Armand Albert Rateau.” Already, Van der Straeten’s work has started to skyrocket at auction. A Palme chandelier from Brandolini’s private collection sold at Phillips, New York, in 2011 for over $70,000, well above its high estimate of $18,000.

For Couturier, the appeal of Van der Straeten’s furniture goes well beyond its investment potential. “Hervé has only one rival, and that is Mattia Bonetti,” says the decorator. “They form the equal halves of European decorative refinement. I wouldn’t be able to design without either!”