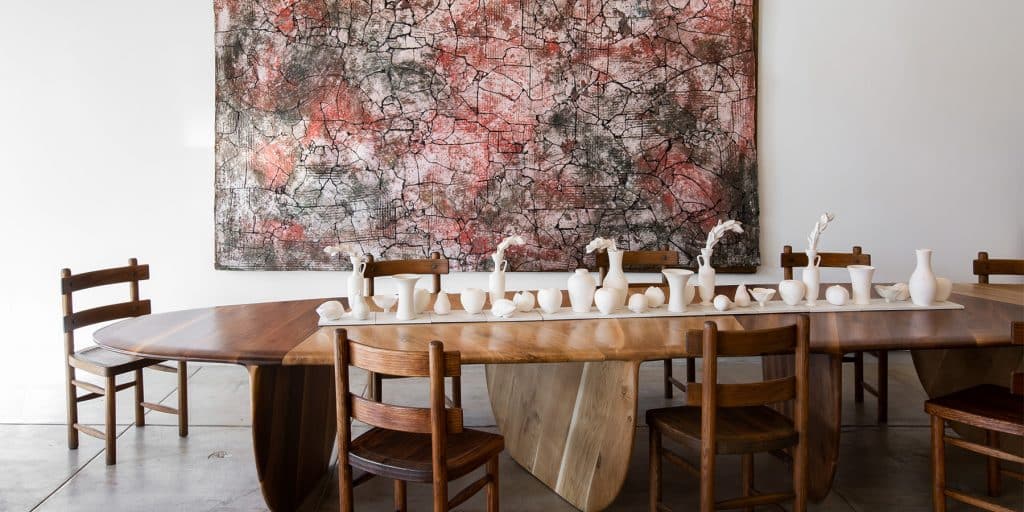 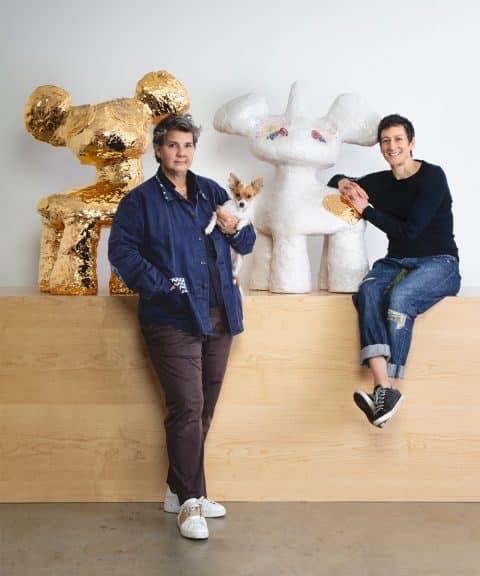 Dealers Kim Hostler (left) and Juliet Burrows recently opened a Los Angeles satellite of their gallery, Hostler Burrows, that, like the New York original, focuses largely on Scandinavian design and art. Above, they pose in the L.A. outpost with their dog, TK, in front of sculptures by Jasmin Anoschkin. Top: Pekka Paikkari’s Epic Moment, 2019, hangs behind a Gal Gaon Pebble table surrounded by Axel Einar Hjorth Sandhamn chairs, ca. 1930. Still Life in White, 2019, from Anat Shiftan‘s “Flora” series, is displayed on the table.

With a gift for discovering cutting-edge contemporary ceramic artists and a deep appreciation for Scandinavian modernism, Kim Hostler and Juliet Burrows have carved out a niche in collecting circles that has helped their New York gallery, Hostler Burrows, flourish. Now, after two decades in the city, the couple have expanded their operation by going bicoastal, opening a new, 3,000-square-foot Los Angeles outpost.

“It just happened naturally,” Burrows says of the L.A. gallery, which officially opened on February 14 with a bash that attracted guests like Kelly Wearstler, Pierre Yovanovitch, Jamie Bush and Nicole Hollis. “We’ve been walking through the doors that are opening to us,” she continues, explaining that they had been contemplating such a move for years when a friend told them about a space about to become available at 6819 Melrose Avenue.

Designed by architect Linda Taalman, the new gallery transforms a 1928 storefront by paring it down to the essentials. “The space was stripped down to its original structure,” Taalman says. “Into this old shell, we placed a clean, floating white-box gallery with a suspended light grid above, allowing the old and new to coexist.”

Much like their location in Manhattan’s Greenwich Village, the Los Angeles gallery mixes vintage 20th-century Scandinavian furniture by such underappreciated architects and designers as Otto Schulz and Axel Einar Hjorth with contemporary ceramic art by the likes of Jasmin Anoschkin and Maren Kloppmann.

That unusual, captivating blend of materials and styles has attracted many high-profile clients over the years, including the interior designer Brian J. McCarthy, a perennial presence on the top-talent lists maintained by such arbiters as Architectural Digest, who is known for producing classic interiors punctuated by artful surprises. “I love Kim and Juliet and everything they represent,” says McCarthy. “They have an exceptional eye for unusual early- and mid-twentieth-century Scandinavian furniture, not to mention the ceramics. They have a beautiful vision.” 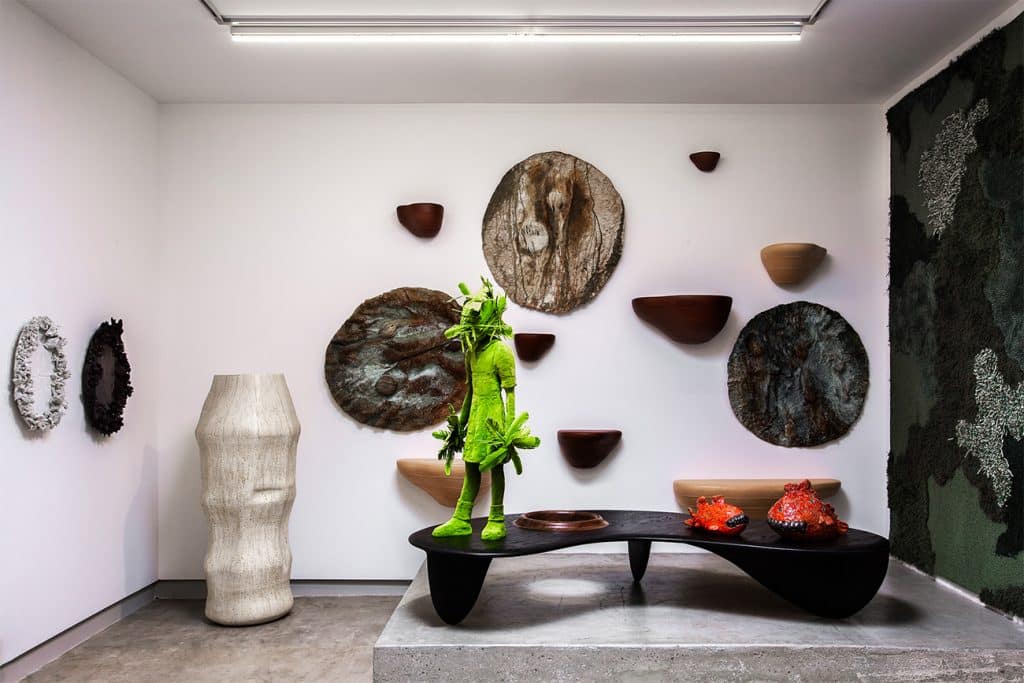 Moss Girl with Two Feather Pom Poms by Kim Simonsson stands atop Gaon’s Volcano coffee table in front of circular wall pieces from Ohad Tsfati’s “Moon” series; all are from 2019. Hanging on the wall to the right is a 2017 carpet by Louise Hederström.

Yet, as fans of the gallery know, it’s impossible to pin down Hostler and Burrows. Beyond the core Scandinavian and ceramic offerings, both the New York and Los Angeles locations reflect the couple’s eclectic interests by presenting whatever happens to capture their attention — from Richard Filipowski’s spidery mid-century Bauhaus-influenced metal sculptures to the architect Gal Gaon’s weighty wooden tables, which appear to be composed of ocean-polished pebbles.

The L.A. gallery includes what Hostler describes as “a dedicated project space — a white box where visitors can have a different experience than what we’re showing in the main gallery.” This, she continues, will be given over on a rotating basis to individual artists or creators, “so you’ll get to walk into their world. We’re going to let go of the reins a little bit and say, ‘Just do your thing.’ ”

For Hostler, the Los Angeles gallery represents a return. She opened her own shop in L.A. in 1989 after spending years trailing her mother, a dealer and designer in Philadelphia. “I grew up in the business,” she says. “My mom used to decorate nightclubs and has a great eye for kitschy, crazy fantasy. She was so good at picking out something amazing where everyone else would just see a pile of junk.” 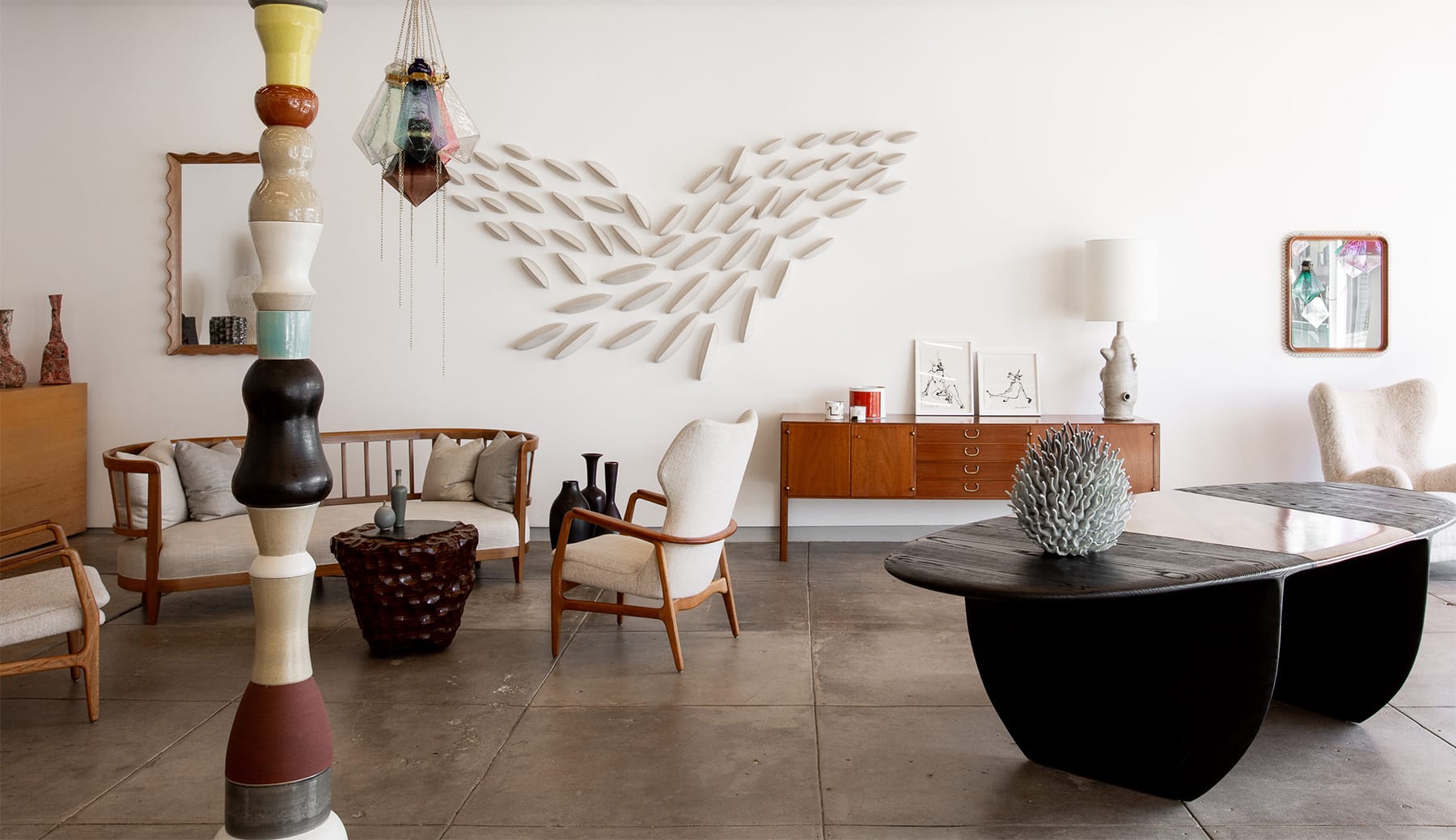 Folly Totem, 2016, by Nicola Tassie stands at the front of a seating vignette featuring Aksel Bender Madsen wingback chairs, ca. 1960, and a Carl-Axel Acking ca. 1940 sofa. To the right in the foreground is Gaon’s Pebble desk, 2017, while the piece hanging in the center of the wall behind is Maren Kloppmann’s Convergence II, 2019.

But operating as a solo dealer soon lost its luster. After a few years in L.A., Hostler decided she wanted something different, closed her shop and moved to New York. “I was working with David Deutsch, who’s a painter, as a studio assistant,” she says. “But you don’t make any money as a studio assistant, so I would also run around and find stuff at thrift stores and resell it to dealers.”

Before long, she connected with Burrows, a professional dancer with Mark Morris’s troupe who was moonlighting as a bartender at the Tribeca restaurant El Teddy’s (where Paul Donzella, another world-class dealer, also worked). 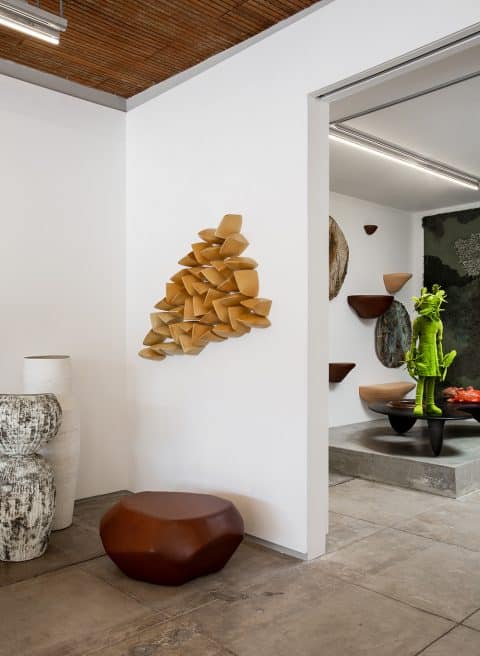 A Masur pouf by Hederström and Carina Grefmar sits on the floor under Kloppmann’s Fragment I; both are from 2019. Next to the pouf are two sculptures by Kristina Riska: Bubble Urn V, 2014 (left), and Winter Urn I, 2016.

“We’d just met at a party and started seeing each other,” says Burrows. “And Kim began making trips to Scandinavia and bringing back some small ceramics in her suitcase.”

In 1998, the couple leased a storefront just down the block from El Teddy’s and opened Antik, named after the Swedish and Danish word for “antique.” “The space was way too big,” says Burrows. “We thought we were just going to do ceramics, but we had this huge space, so we said, ‘Well, let’s sell some furniture as well.’ And it just grew from there.”

Hostler had previously sold American furniture but was upset by the emergence of companies that began producing low-cost knockoffs of mid-century modern classics. “There was no integrity,” she said. “I knew we had to do something else, and the Scandinavian work was just so beautiful, so well documented and fun, and nobody was doing it — it offered something totally new.”

As their business grew, the partners, who got married in 2008, moved to 10th Street in Greenwich Village and eventually changed the gallery’s name to Hostler Burrows. They also began to focus more on contemporary artists and designers, as so many top dealers have done. 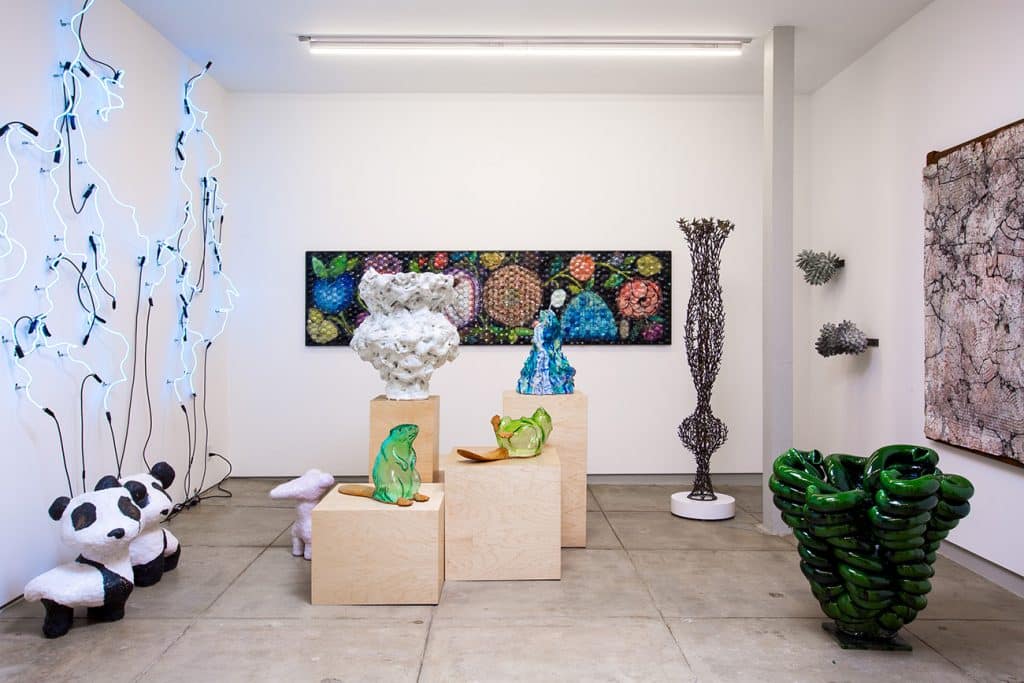 Lost on You, 2019, by Heini Riitahuhta hangs on the back wall, with Frida Fjellman‘s She’s Lost Control on the wall to the left and Paikkari’s Twelve Minutes of the Rain (Dodici minuti di pioggia) on the one to the right; all are from 2019. The sculpture farthest to the right is Torbjørn Kvasbø’s Stack, 2014.

“We were honoring these artists from the past who didn’t get their due, in our opinion, but we were always afraid of having to deal with living people,” says Burrows.

Everything changed with the 2015 solo show they mounted for the celebrated 21st-century Finnish ceramic artist Kristina Riska after dabbling in contemporary design for years. “When we started selling the work, it was so incredibly gratifying, because we were helping to support an artist,” says Burrows. “It snowballed from there.”

The new gallery occupies a 1928 storefront on Melrose Avenue that the gallerists had architect Linda Taalman transform. “The space was stripped down to its original structure,” Taalman says. “Into this old shell, we placed a clean, floating white-box gallery with a suspended light grid above, allowing the old and new to coexist.”

Now, contemporary work is a primary focus. The L.A. outpost’s inaugural exhibition, “Forest Primeval,” which runs through March 21, comprises nature-inspired works from 19 of the gallery’s artists. Pieces on view include glass beavers by Frida Fjellman, a Swedish designer better known for her crystalline glass chandeliers; a ceramic piece resembling cracked earth by the Finnish artist Pekka Paikkari, who frequently produces purposely fractured pieces; and a wall installation by the Minneapolis-based Kloppmann, who makes sculptures composed of multiple geometric porcelain pieces. “It feels so fresh,” Burrows says, explaining the appeal of contemporary work. “And the whole point is to keep yourself interested, and your clients interested.”

“It also feels meaningful,” adds Hostler. “Especially in today’s world, where artistry and making things by hand aren’t as celebrated as they used to be, it’s really exciting.” 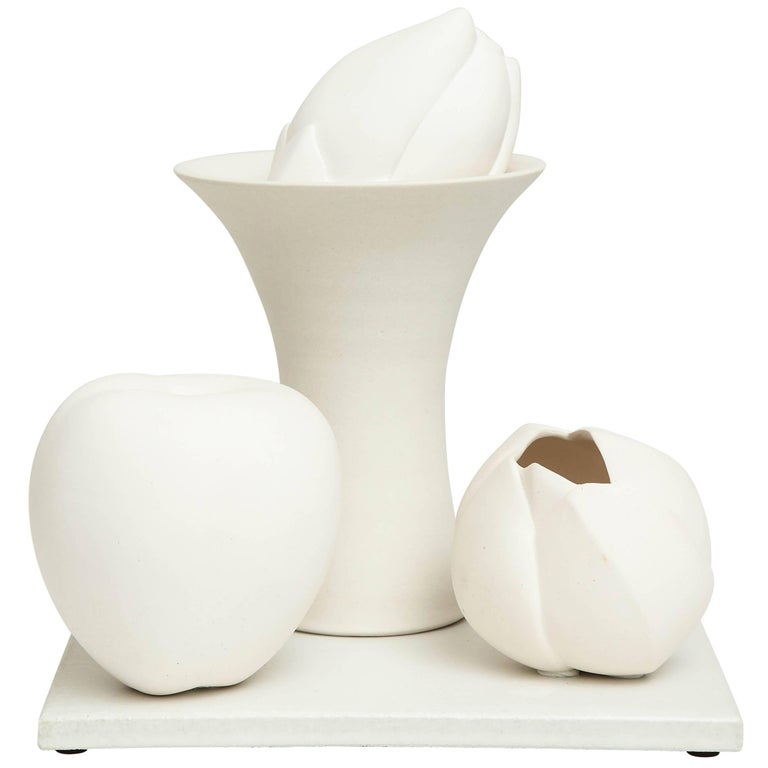 Shop Now
Still Life in White, 2017, by Anat Shiftan
“Anat Shiftan’s “Still Life” sculptures are great singly or in multiples. They have an innate classicism, but the unglazed matte surface adds a contemporary edge.” 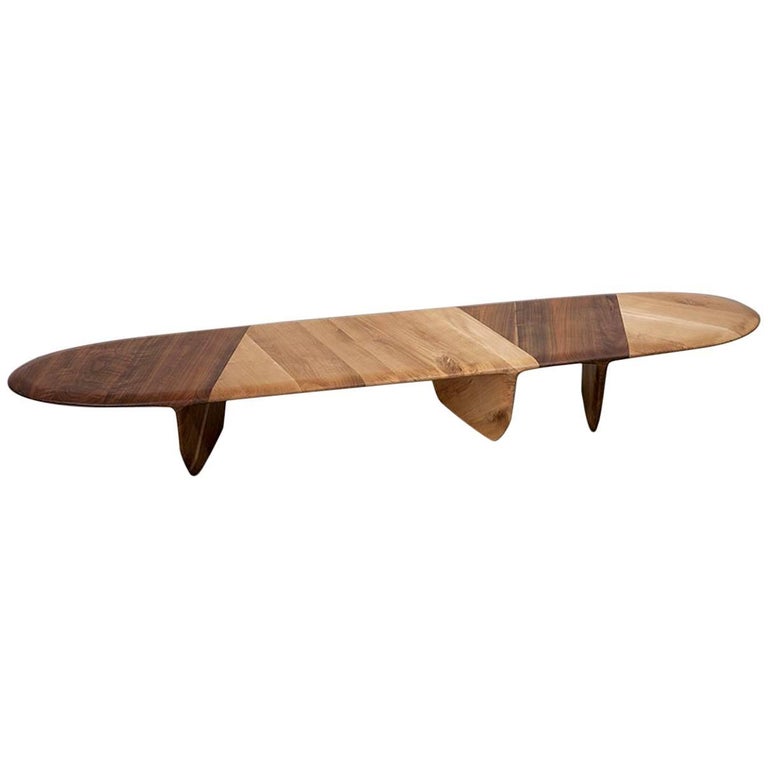 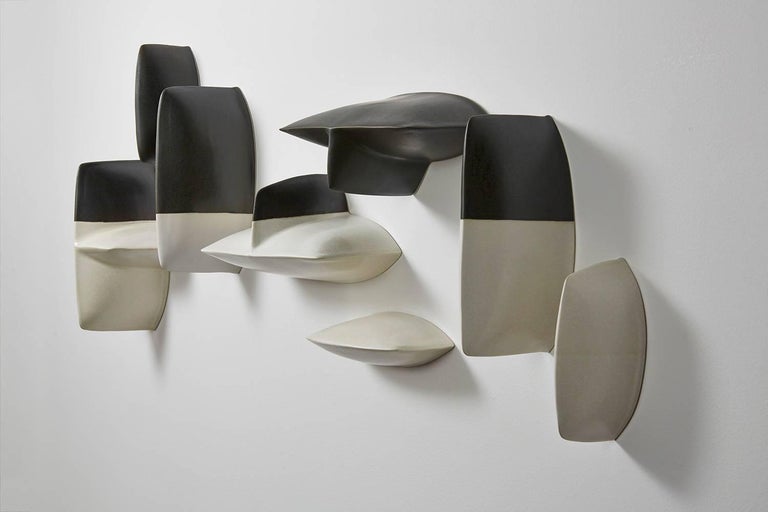 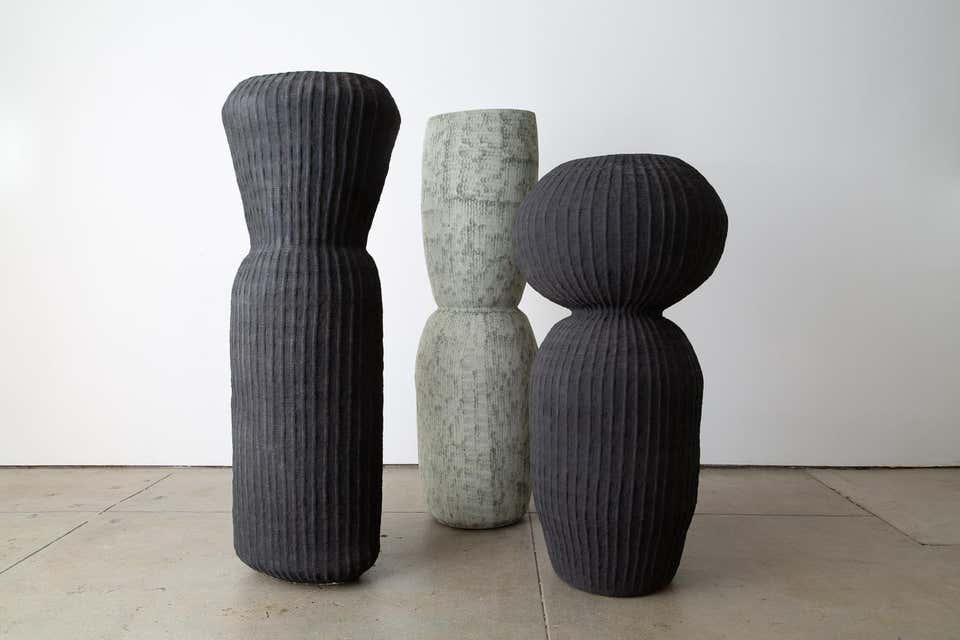 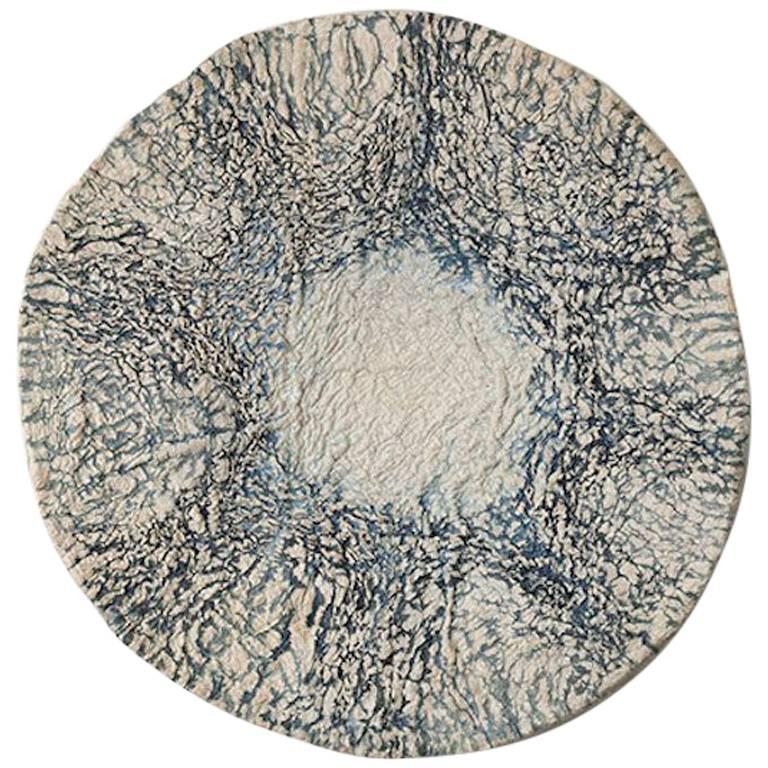 “Ohad Tsfati’s ‘Moon’ pieces are handcrafted from mulberry bark and natural dyes using a method similar to the Japanese technique for creating washi, in existence since about six hundred A.D.” 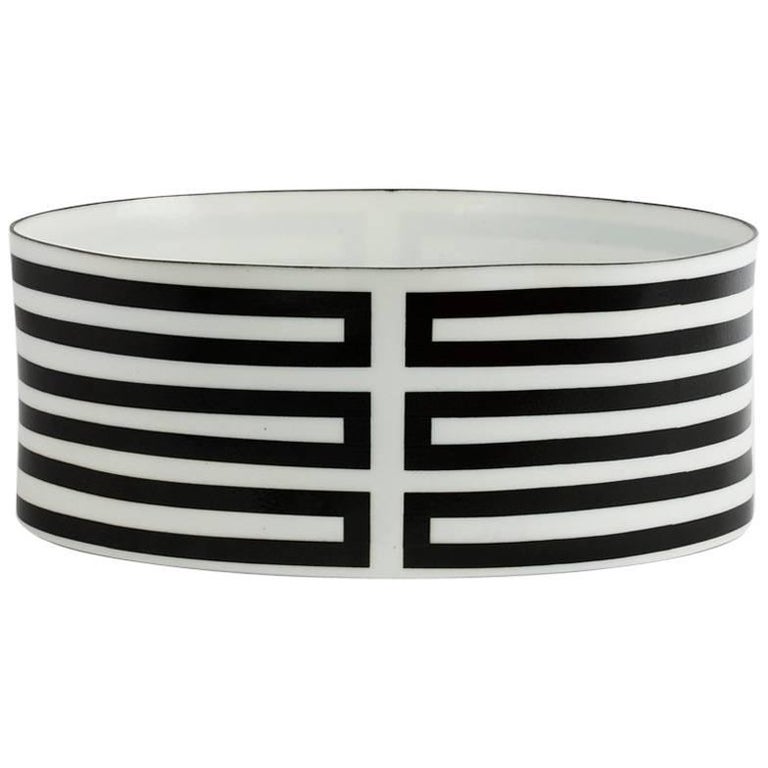