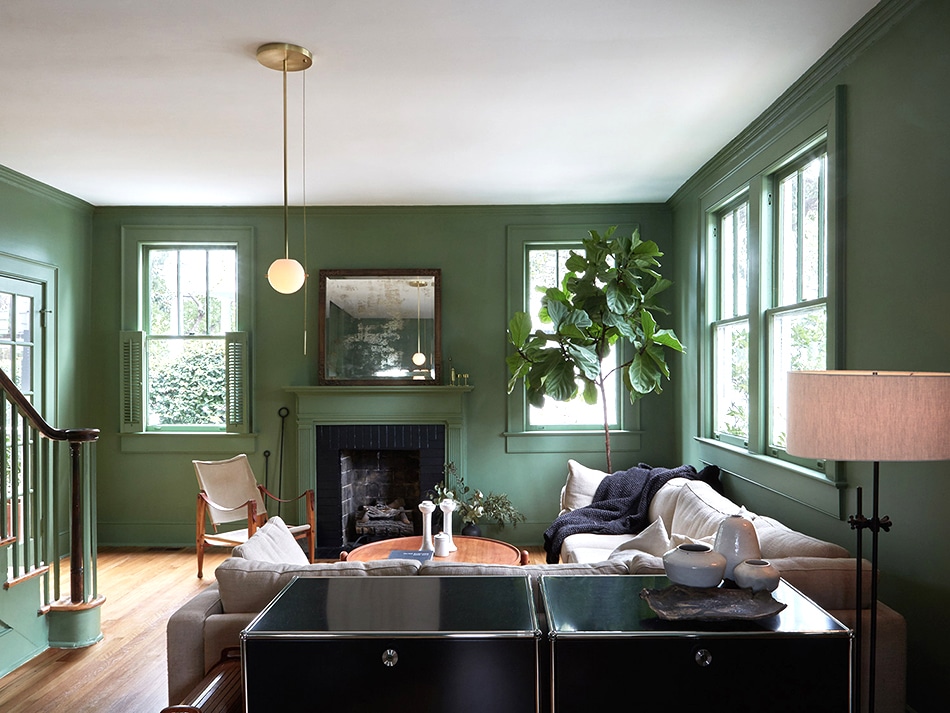 Stefanie Brechbuehler, Robert Andrew Highsmith and Ryan Mahoney, all alums of the Rhode Island School of Design, started Workstead in 2010 in Brooklyn and have since opened a satellite studio in Charleston, South Carolina. They made a name for themselves designing the interiors for Brooklyn’s Wythe Hotel, a former cooperage, where their polished yet accessible interiors broke with the borough’s typically gritty vibe. “Our designs are modern and restrained, but we use rich materials, such as brass, bronze and walnut, that have historical meaning,” Highsmith says. Their furniture, too, puts a fresh twist on history: The group’s industrial chandelier, which has adjustable arms and an exposed hanging wire, was inspired by early factory lighting. The orbit sconce, their best-selling lighting fixture, is a spare modern take on a candle with a reflector. 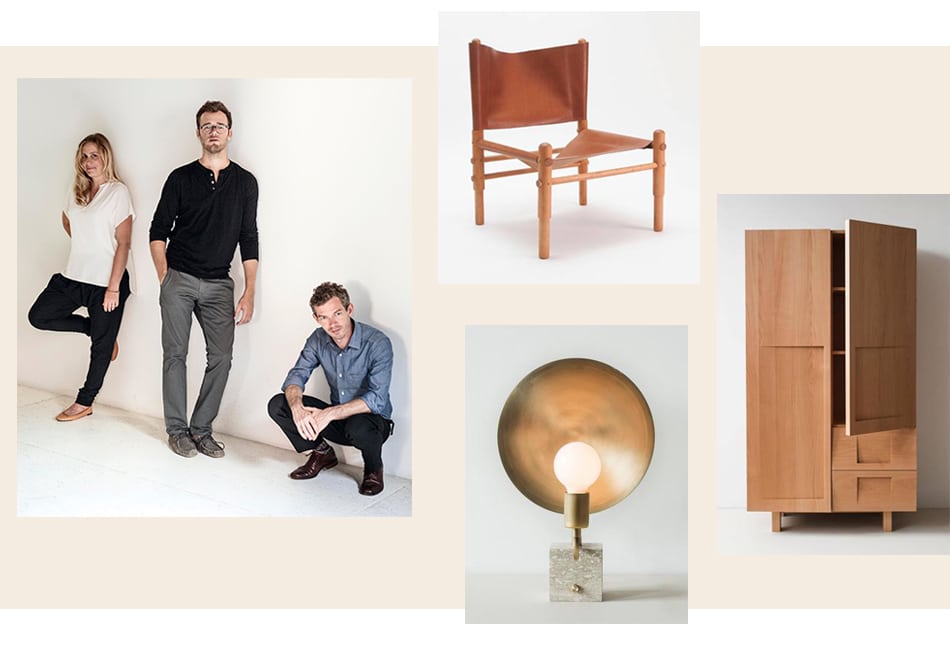 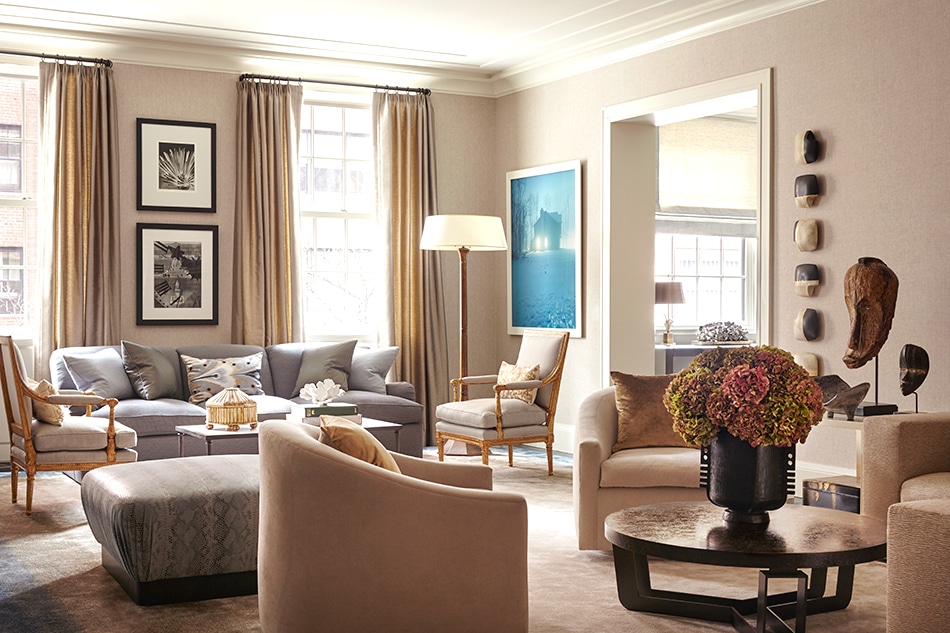 After studying art and working in galleries, Sandra Nunnerley opened her design studio in the 1980s. Since then, Nunnerley, who splits her time between New York and London, has created comfortable yet chic interiors for many art collectors, often taking design cues from their favorite masterpieces. Born from her expert knowledge of materials, her new line of side tables for Maison Gerard — Solaris, Eclipse Black and Luna Ivory — is made of Corian, a composite that feels substantial but is light enough that the pieces can be moved around easily and grouped together in a sculptural manner. Of the idea’s genesis, Nunnerley recalls, “I was designing a vast penthouse in Berlin with wraparound views, and I knew the owners would want tables that they could reconfigure for entertaining.” 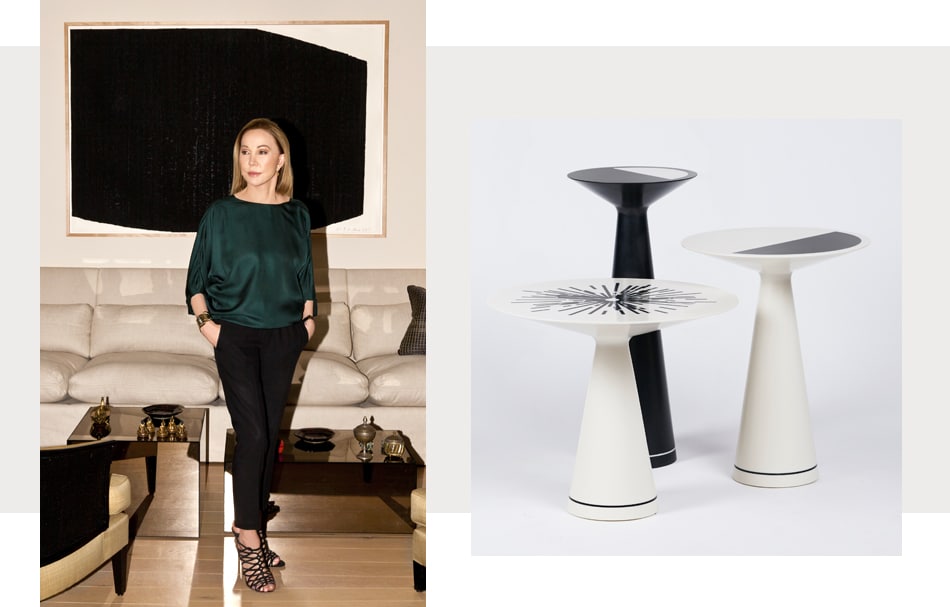 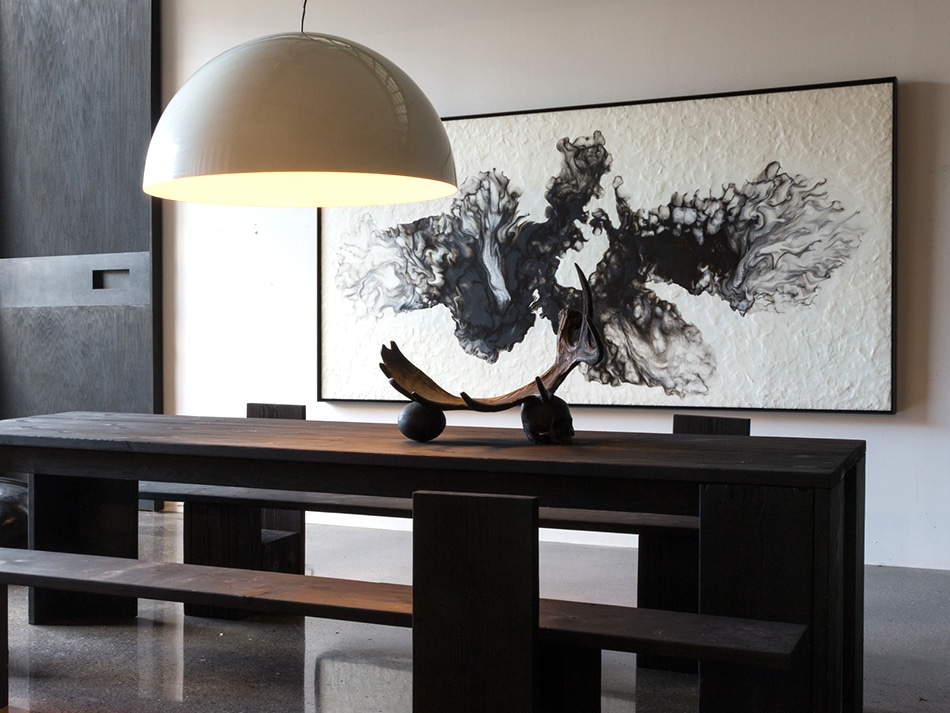 Lukas Machnik, who has worked for international clients since the late 1990s, describes his style as part minimalist, part Bauhaus, part avant-garde. The designer, who splits his time between Chicago and Paris, loves a palette of black and white. He prefers furniture with weight and substance and abhors anything fluffy. His own furniture designs, sold through his LMD/studio store, take this aesthetic to extremes: He drew inspiration from Brutalist architecture for his Monument chairs, which look like hefty puzzle pieces in black oak plywood. His Obelisk slit lamps, which are made of ebonized steel and stand more than seven feet tall, are reminiscent of pieces by Le Corbusier and Mies van der Rohe. He had them in mind for his own home and studio — an enormous former glass factory in Chicago — but the pieces quickly became popular with collectors. “I like to push the boundaries,” he says. 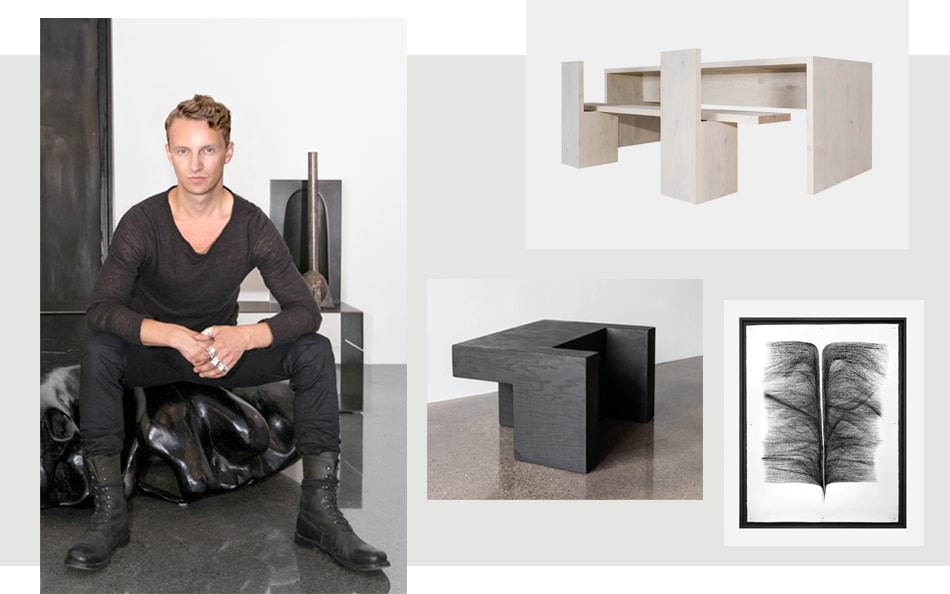 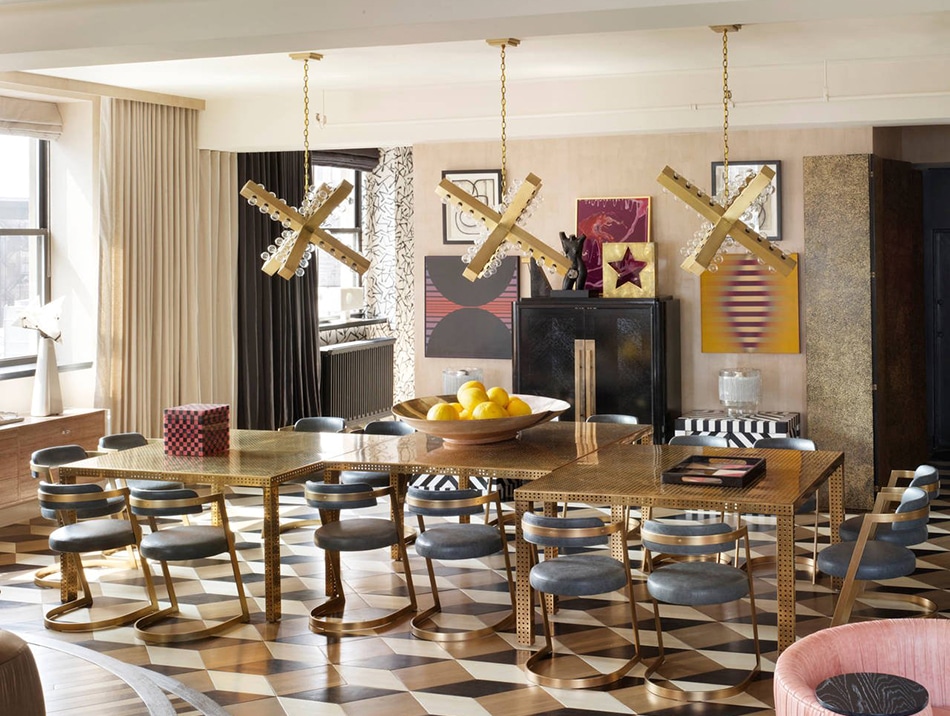 Since founding her studio, in 1995, Kelly Wearstler has been a go-to designer for Hollywood’s A-list, as well as luxury hoteliers. Her signature style, often described as a new Hollywood Regency, is typified by sumptuous materials, such as marble and animal skins, sinuous lines, exuberant patterns and bold California colors. Over the years, her business has branched out to include everything from furniture and lighting to fabric and even fashion. The first custom piece of furniture she created, years ago, was a chair for a vintage low-profile desk. “We needed an artful chair with metal legs, so we sculpted and cast the legs to complement the desk’s silhouette,” she recalls. The Durant sofa from her new collection, whose arms seem to hug the bottom cushions in place, reflects her love of detail as well as her eye for functionality. “The deep seat, wide arm and low back make it comfortable, while the understated textured legs, which are made of ebonized oak, make the piece stand out,” she says. 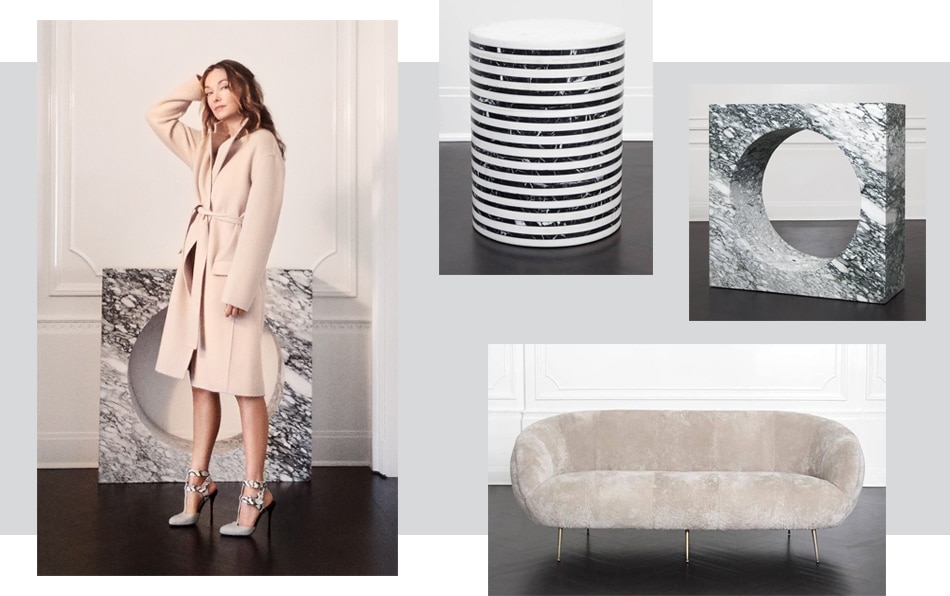 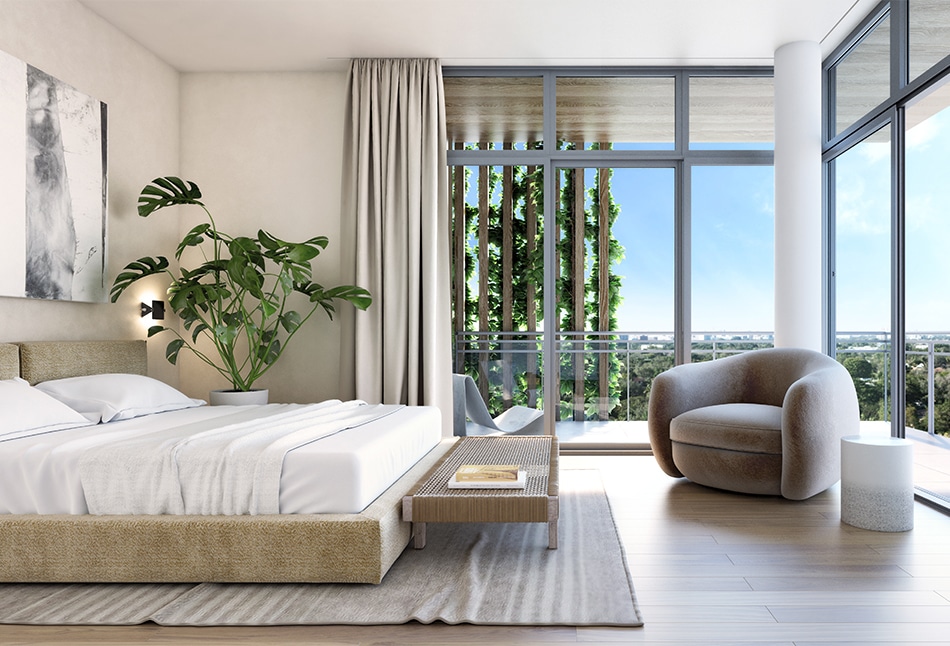 The bedroom of this Miami residence features a white opal and plaster drum side table by Samuel Amoia. Photo by Eileen Chaing

Samuel Amoia has spent the better part of a decade working on interiors around the world, including the DeLorenzo Gallery, on Madison Avenue, and Itz’ana Resort and Residences, in Belize. A few years ago, he created a custom drum side table out of stone, cement and salt for the 1 Hotel South Beach, in Miami. So many people commented on the piece that he ended up showing a similar version in a design showcase, where Stella McCartney discovered it and commissioned him to design a store-full of pieces expanding on the natural, textural theme. “Furniture design is where I can really be creative, letting my mind go wild. It’s exhilarating,” he says. At the same time, his interiors background gives him a good sense of what people want: rich textures and unusual materials. His glittery consoles, which are covered in aluminum or brass shavings, satisfy these desires. 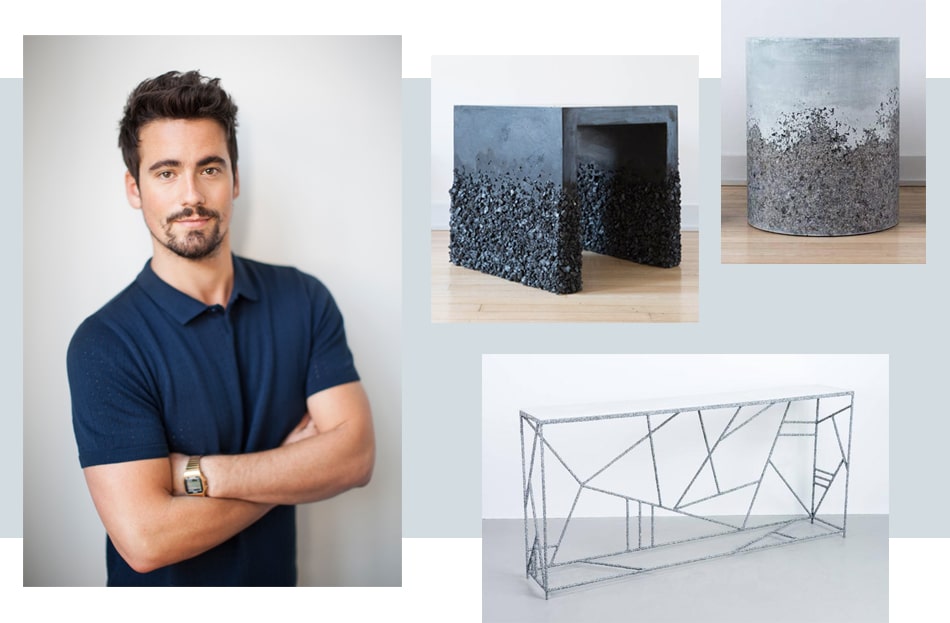 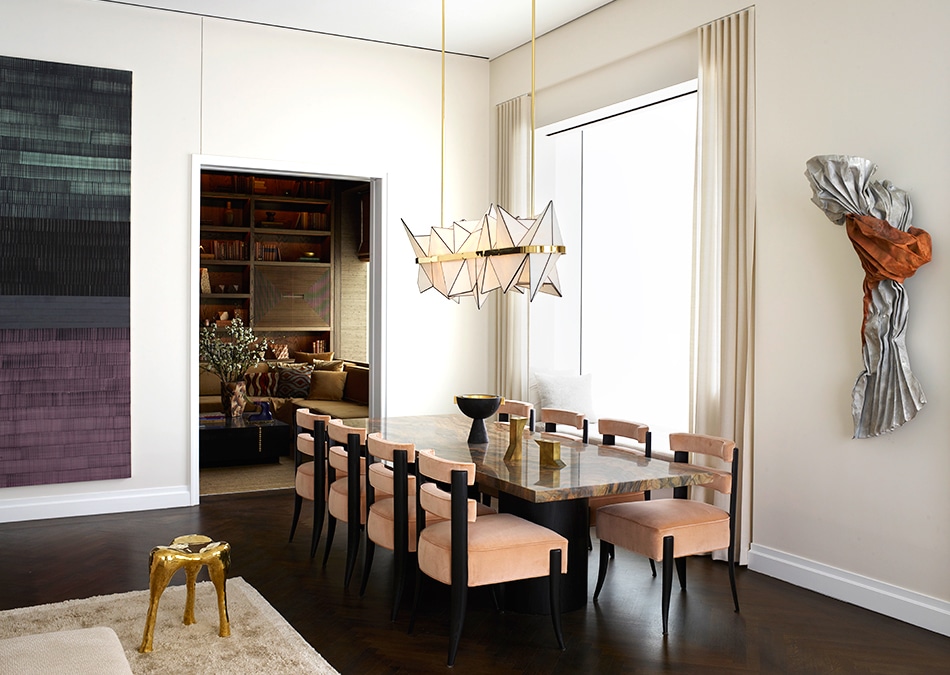 In this dining room designed by Kelly Behun, Jason Koharik‘s Calve light fixture hangs over a custom marble table of her design surrounded by chairs from Van den Akker, behind which sits an Aria Hex stool by the Haas Brothers from R & Company. Artworks include Soñe que revelabas (Colorado), 2016, by Juan Uslé and a wall sculpture by Lynda Benglis. Photo by Richard Powers

Kelly Behun has created highly bespoke interiors since the 1990s, when she was an apprentice in Ian Schrager’s design studio, working side-by-side with legendary architects and designers like Philippe Starck and Andrée Putman. Custom furniture design has always been a part of her practice, and since going out on her own, in 2001, she has developed a stable of skilled makers who execute her modern twists on traditional techniques, such as stone mosaic work and wood marquetry. In 2012, she debuted her own furniture line in an exhibition at R & Company. Like her interiors, which deftly mix the artful and surreal with the laid-back, her furniture designs range in style from bohemian floor pillows made with Moroccan textiles to boxy chairs covered in eye-tripping Memphis stripes. She’s always thinking about how her pieces will be used: A dining table with a mosaic base that’s an homage to Roberto Burle Marx has an irregular curving top because, she says, “I noticed at a dinner party that people interacted more when seated around an oddly shaped table.” 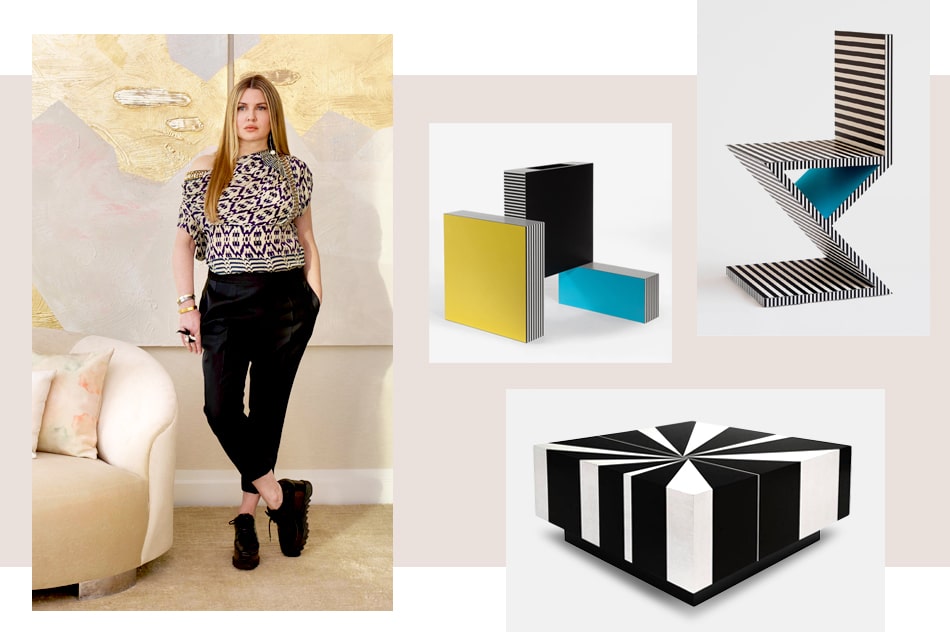 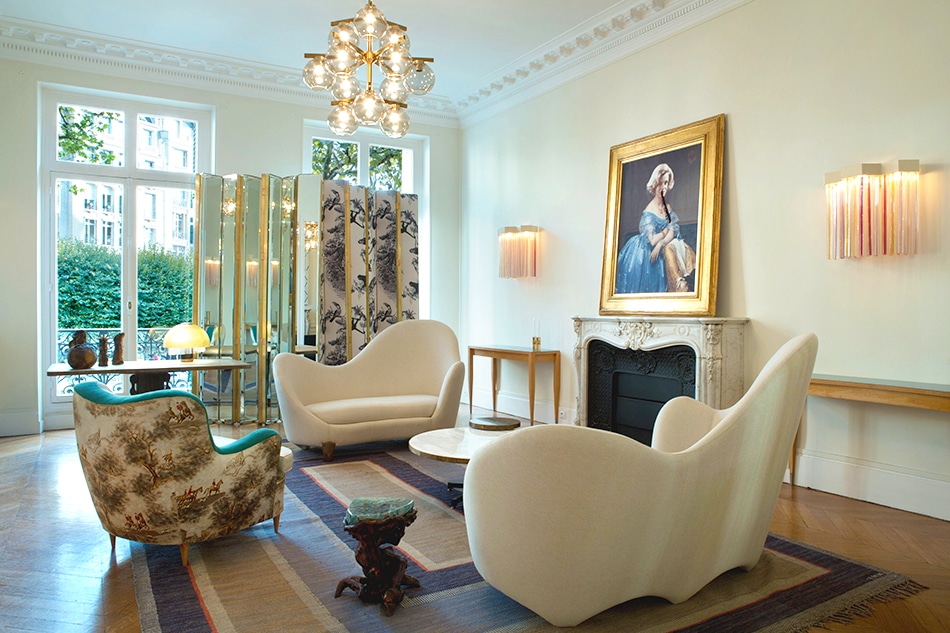 This living room by Dimore Studio contains a pair of Koala sofas by Elizabeth Garouste and Mattia Bonetti, a Giò Ponti armchair and a chandelier by Hans-Agne Jakobsson. It also features a Tavolo Basso 055 table and a Paravento 055 screen, both by Dimore Studio. Photo by Michel Bousquet

Britt Moran and Emiliano Salci have become a powerhouse design duo since opening Dimore Studio in Milan in 2003. Among their projects: the luxe, minimalist Pump Room bar, in Chicago; the glamorous, vintage-inspired Caffè Burlot, in Paris; and the Grand Hotel et de Milan, where they applied a light touch, keeping most of the original furnishings intact. Although their backgrounds differ — Moran is American, Salci Italian and a former art director at Cappellini — their style is utterly Italian, characterized by elegance, warmth and subtle colors. “We try to merge historical design and contemporary art in all our projects,” Salci says. So, it’s no surprise that the clean lines of their brass-and-ceramic vases are reminiscent of chairs by the Italian architect Carlo Scarpa and that their rugs resemble abstract paintings. 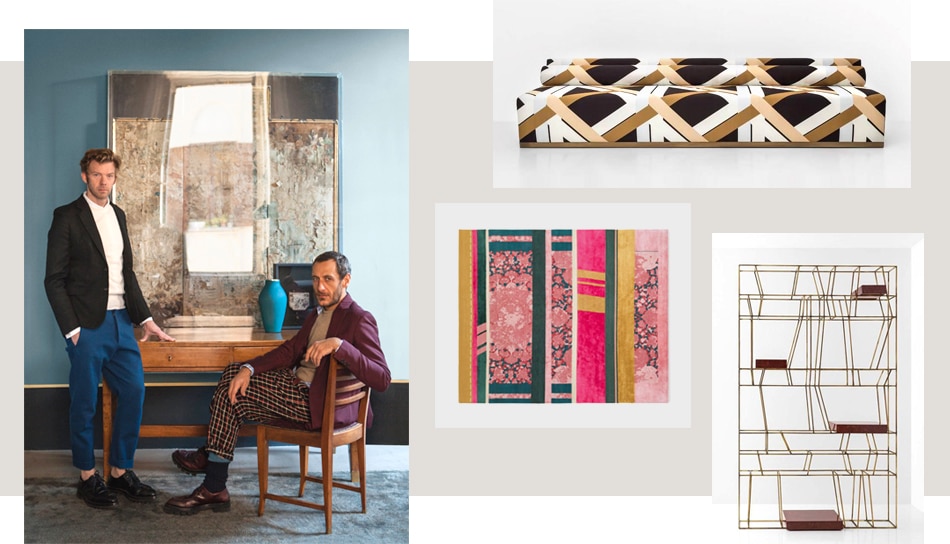 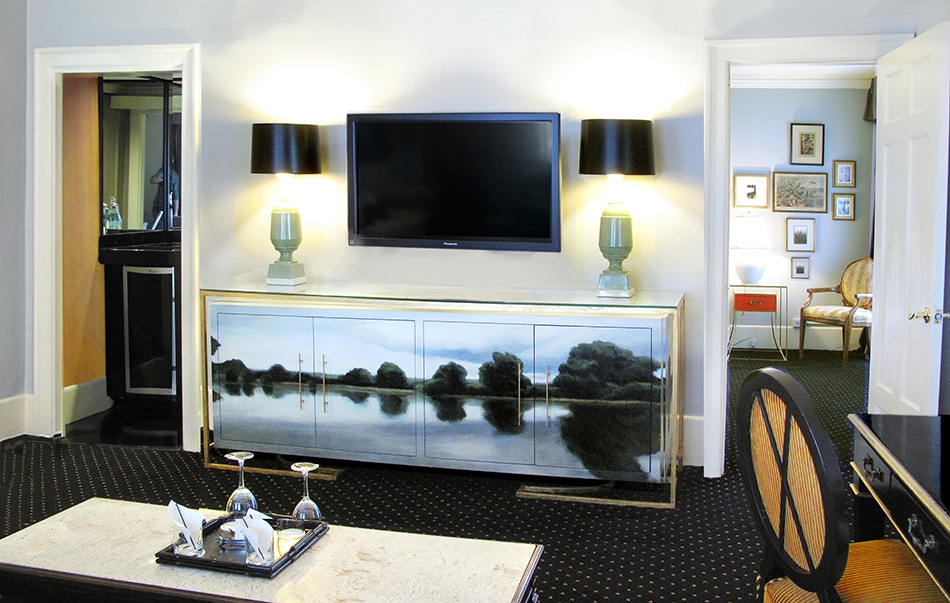 Since 2012, Seattle-based Tamara Codor and Sterling Voss have designed the interiors of hotels, restaurants and residences throughout Seattle. Codor Design merges the former’s training in classical painting with the latter’s background in commercial design. Codor spent years creating intricate one-of-a-kind landscape murals, mostly in powder rooms, and creating luscious faux finishes. With their firm, her painting has expanded into other areas of interiors, such as a console in Seattle’s Hotel Sorrento on which she depicted a verdant landscape of trees reflected on a lake. The duo has also crafted a collection of chinoiserie-inspired painted panels that can be hung like artworks, installed as part of a wall or assembled into decorative screens. “Furniture design gives me the freedom to make the fantastical things I dream of,” Codor says. 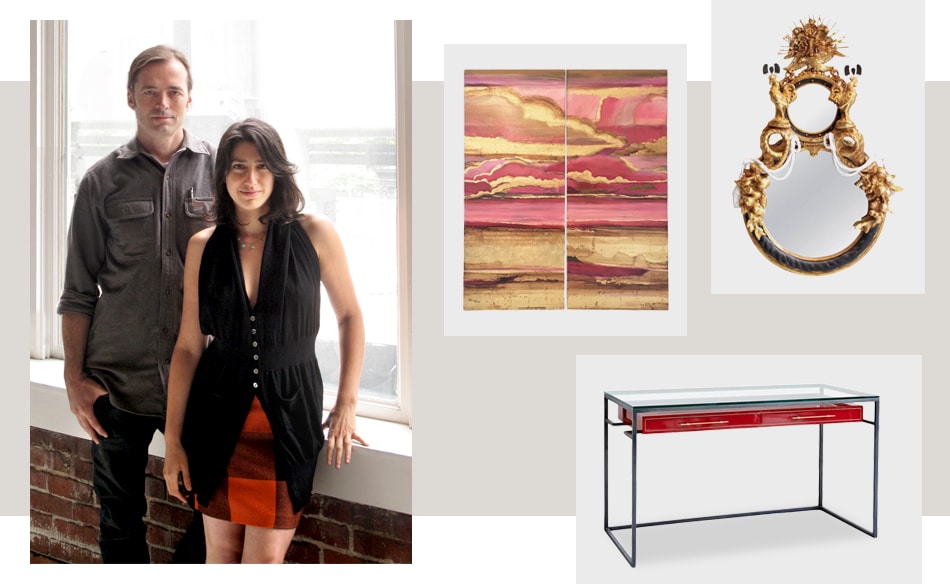 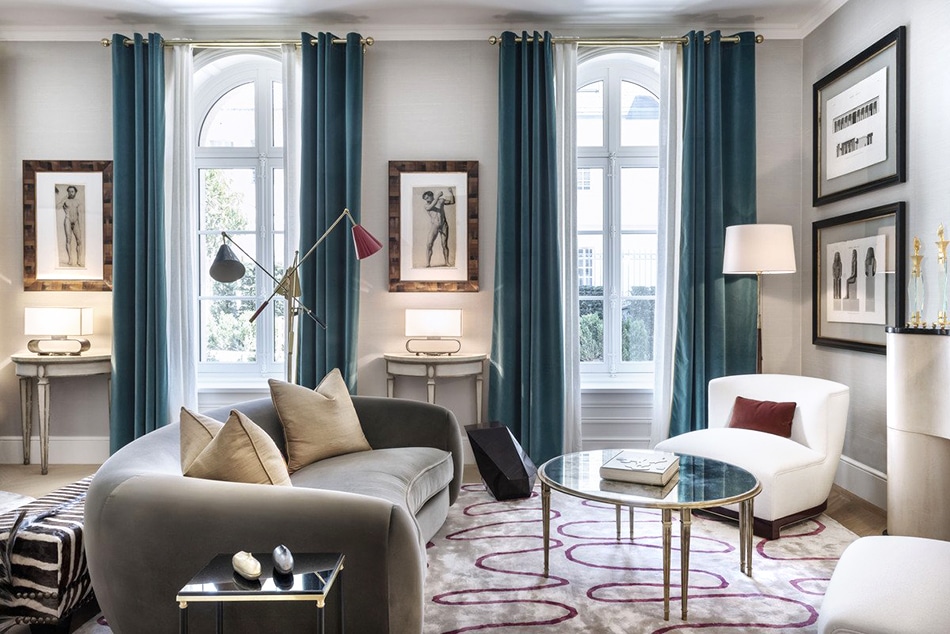 This Paris apartment by Achille Salvagni features a pair of the designer’s Vittoria slipper chairs and his geometric Emerald side table. Photo by Paolo Petrignani

Since founding his Rome-based firm, Achille Salvagni Architetti, in 2002, Italian designer Achille Salvagni has become renowned for his residential and super-yacht interiors. His style blends the simplicity of Italian modernism with historical references, such as glamorous touches of Art Deco or a bit of ancient Roman classicism. His materials are always sumptuous and bold; he particularly loves bronze, marble, velvet and lacquer finishes. After years of designing custom pieces for clients, he launched his first furniture and lighting collection with Maison Gerard in 2013, and it was a hit with collectors. “I can’t presuppose a space for these pieces, so I design for curiosity, giving the object a story,” he says. His Tango console table, with its intertwining bronze legs and noir doré marble top, was inspired by a trip to Buenos Aires, where he was captivated by the movements of the dancers in the city’s milongas. 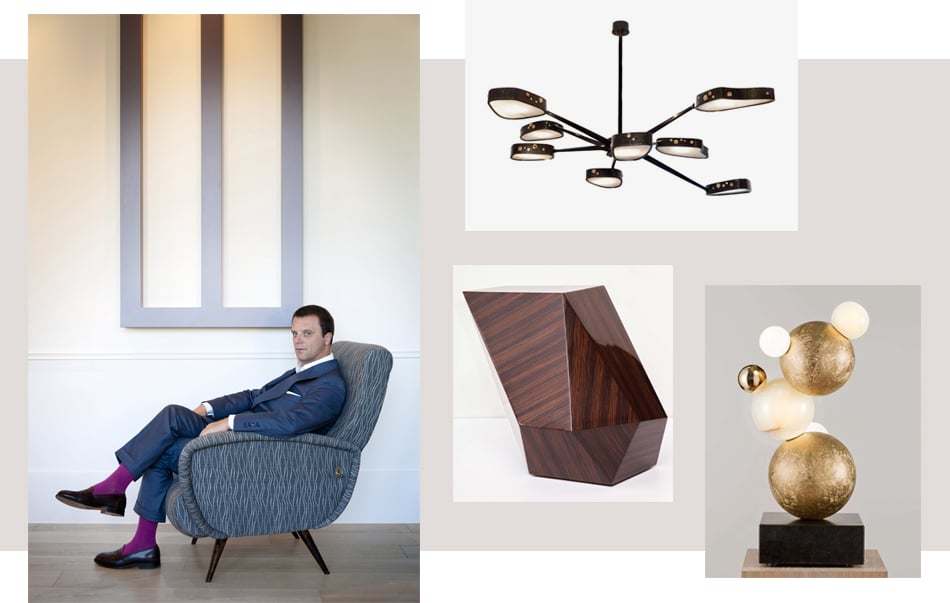