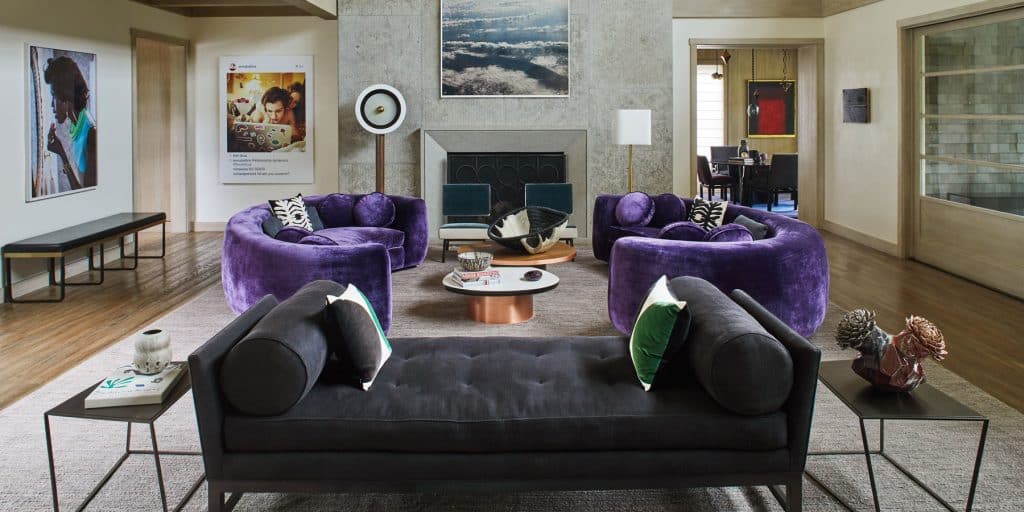 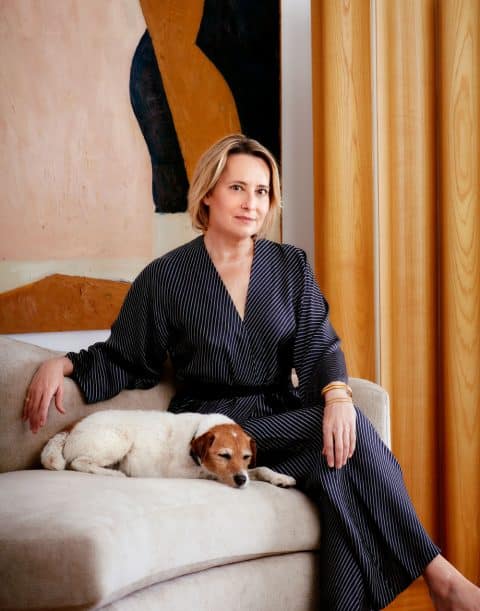 May 19, 2019Mallery Roberts Morgan with Romy, her Parson Russell Terrier, in her Los Angeles home. The 1970s curved-back sofa is from Galerie Sommerlath, and the Eames FSW-8 folding screen is from JF Chen (portrait by Trevor Tondro). Top: “Even if my clients aren’t collectors when we begin,” Roberts Morgan states, “by the time we finish, they are!” This Beverly Hills living room features a daybed of her own design (photo by Sam Frost).

I always feel like I live like a student,” jokes Mallery Roberts Morgan. Glancing around her Beverly Hills home, one sees little evidence of that, save for a MacBook — the loyal accomplice to 21st-century hustling.

In the living room, a voluptuous sofa from the 1970s channels Vladimir Kagan in a wistful mood. A portrait by Claire Tabouret leans on the mantle, while an oft-occupied vintage Christian Liaigre Polo desk snags the best view of life on the leafy street outside.

A journalist, author, interior designer, tastemaker and guardian to a plucky Parson Russell Terrier named Romy, Roberts Morgan is happily eclectic. She practices her own brand of creative fluidity, which encourages cross-disciplinary overlap. “I think of my work as the alchemy of writing and design,” she says.

For nearly two decades, Roberts Morgan has been crafting soulful, sophisticated interiors. She’s fashioned townhouses in London and Paris, the Mexican villa of a polo-playing millionaire and the 7,000-square-foot Los Angeles home of a glamorous family — all for smart, culturally curious, art-savvy clients who want well-appointed spaces without cookie-cutter effects. 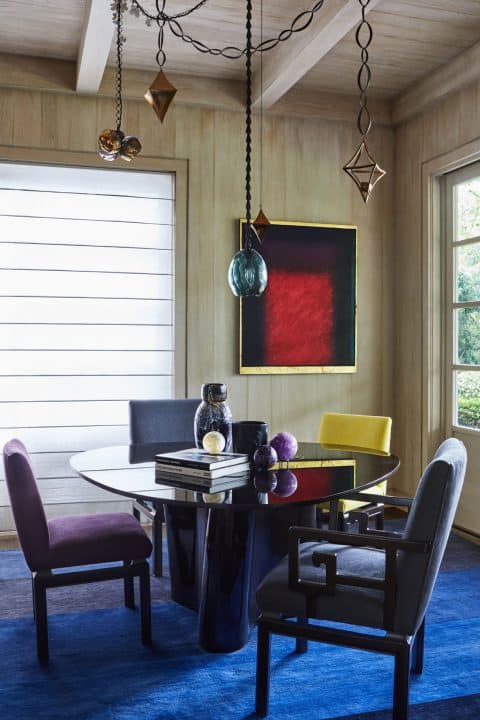 “The homeowners entertain frequently and say everyone always gravitates to this room,” Roberts Morgan says of the dining room of the same house. “The sculptural black ceramic table and deep blues of the rug ground the jewel-like hanging light installation by Los Angeles artist David Wiseman.” Photo by Sam Frost

Dressed in ankle-cut jeans and a button-down shirt, Roberts Morgan kicks off her leopard-print Belgians and settles onto the sofa. She’s soigné but comfortable, like L.A. itself, where things unfold naturally and people aren’t fact-checking your bio. “If there’s anything I hate, it’s snobbism,” she says. “It serves no purpose.” Her ideals are cooler, freer, more bohemian.

Roberts Morgan’s mostly residential projects embody a quality that vexes Instagram’s algorithm: individuality. “The through line of my design work is that it’s very curated, very personal,” she says. “I always tell my clients that in forty years’ time, when their kids are selling their furniture, it’s not going to a garage sale or estate sale. It’ll go to Sotheby’s or Christie’s. Not because it’s the fanciest or most expensive but because every piece we bring into the house holds a little piece of the history of design. Everything has resonance. Nothing is disposable.” 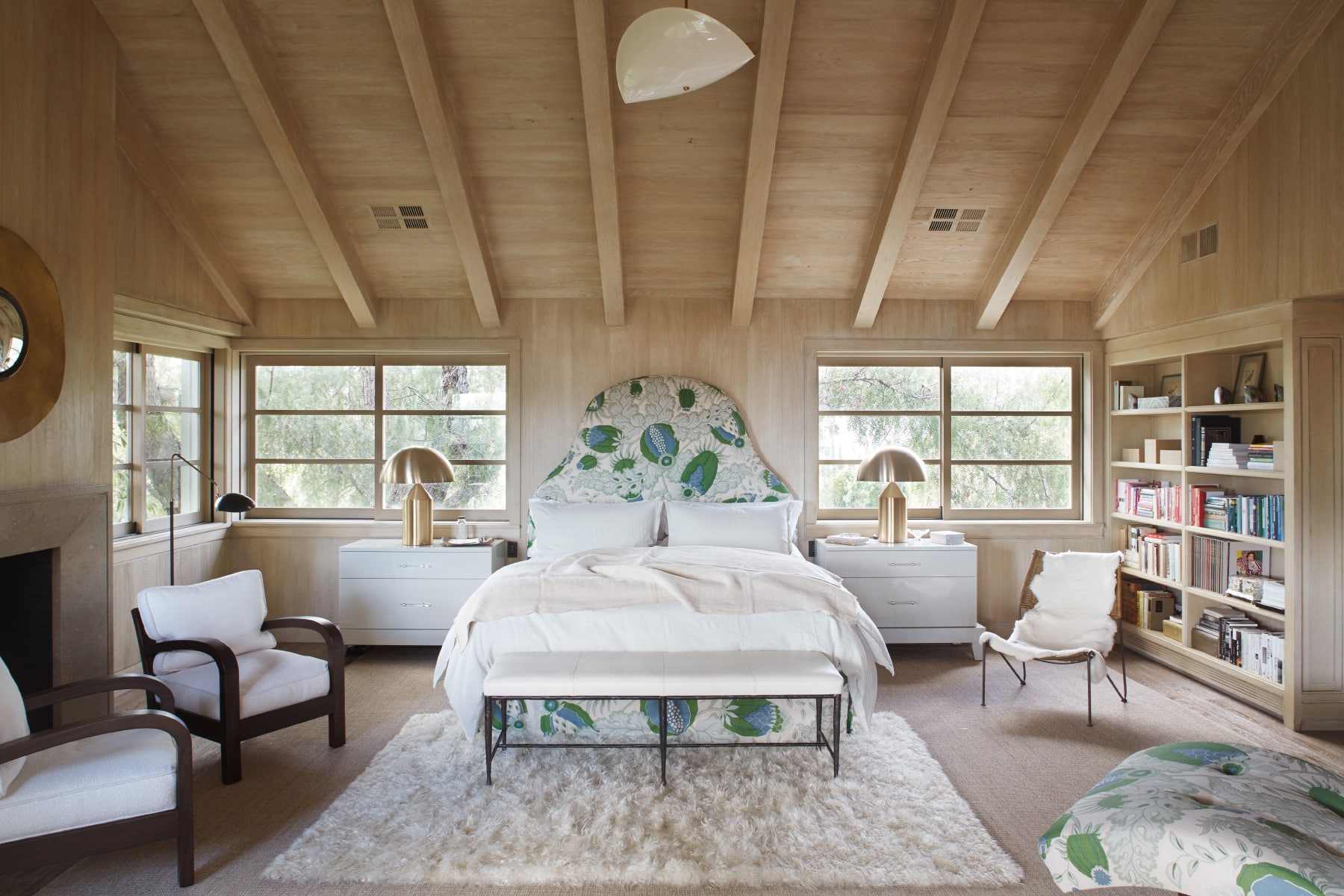 We wanted the master bedroom to feel both masculine and feminine — for him and for her,” Roberts Morgan says of the Beverly Hills home. The bold fabric of the upholstered bed pops in the otherwise neutral space. “We quilted the pattern on the headboard to add a little sweetness. Los Angeles is terrific for the availability of talented artisans and craftspeople who still have these traditional skills.” An Hervé Van der Straeten mirror from Maison Gerard hangs over the fireplace. Photo by Sam Frost

Her mastery in achieving that timeless yet personalized resonance is displayed in Sierra Towers, the famed L.A. high-rise where Cher and Elton John have resided. Capturing the vitality of her client, a young Italian design executive who wanted a taste of the Los Angeles dream, Roberts Morgan focused on a few good, meaningful mid-century modern classics. She selected a creamy linen sisal flat-weave to lighten the space and mask the sins of an outdated floor. By mixing Charles and Ray Eames, Arne Jacobsen, Ludwig Mies van der Rohe and Eero Saarinen with local California makers like Lawson-Fenning and artist JoAnn Patterson, Roberts Morgan summoned an enticing Los Angeles aura: barefoot nonchalance cut with a soupçon of “I can’t believe I’m here” giddiness. 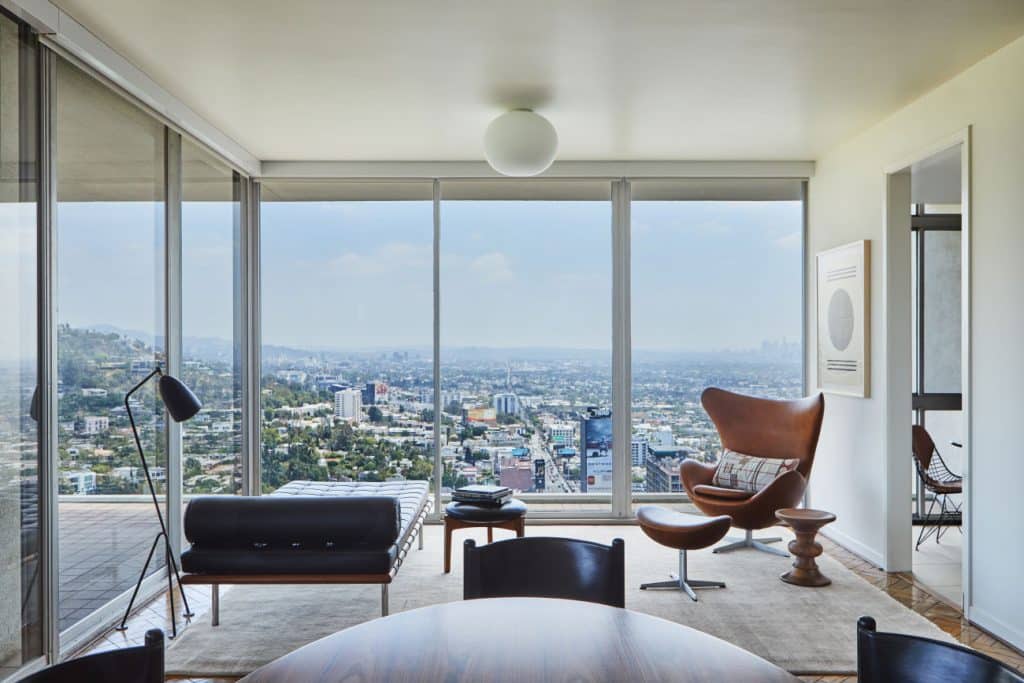 Located in the iconic mid-century Sierra Towers building in Los Angeles, this sitting room features a Ludwig Mies van der Rohe Barcelona daybed and a Greta Magnusson-Grossman Grasshopper lamp, along with an Arne Jacobsen Egg chair and ottoman from Danish Modern L.A. All photos by Sam Frost except otherwise noted 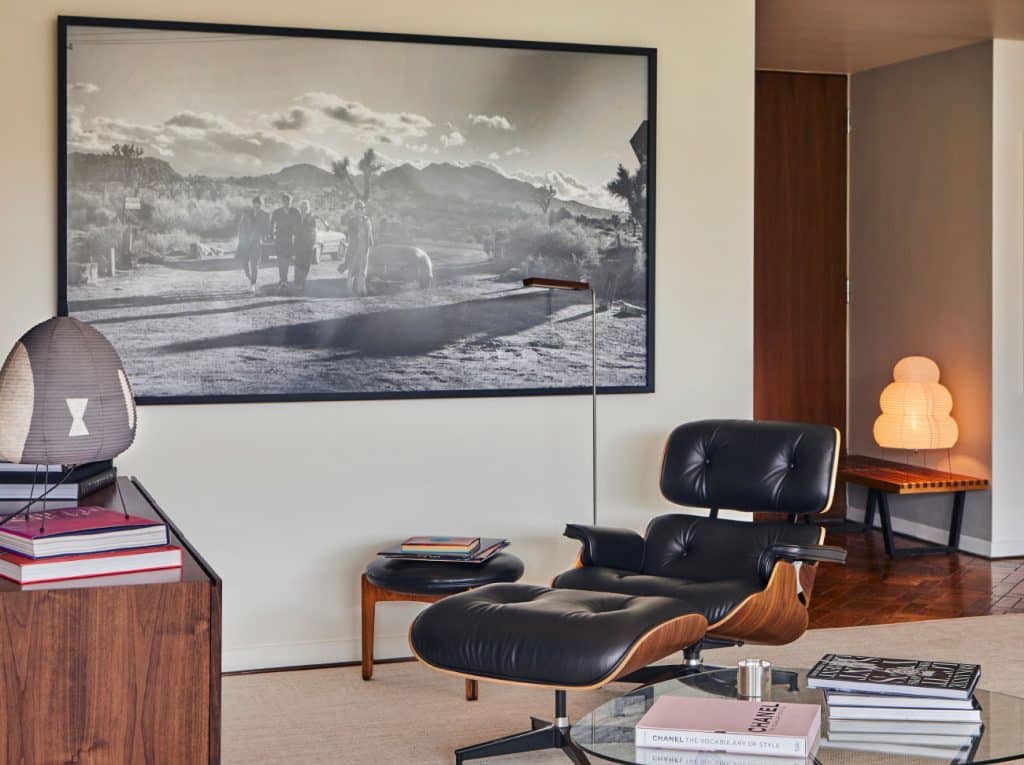 “For this client, we emphasized design classics from the same mid-century period as the building,” Roberts Morgan says. This reading nook includes a Charles and Ray Eames lounge chair and ottoman, a vintage Danish rosewood and leather stool from JF Chen and Isamu Noguchi for Akari lamps. The silkscreen painting is by John Giorno. 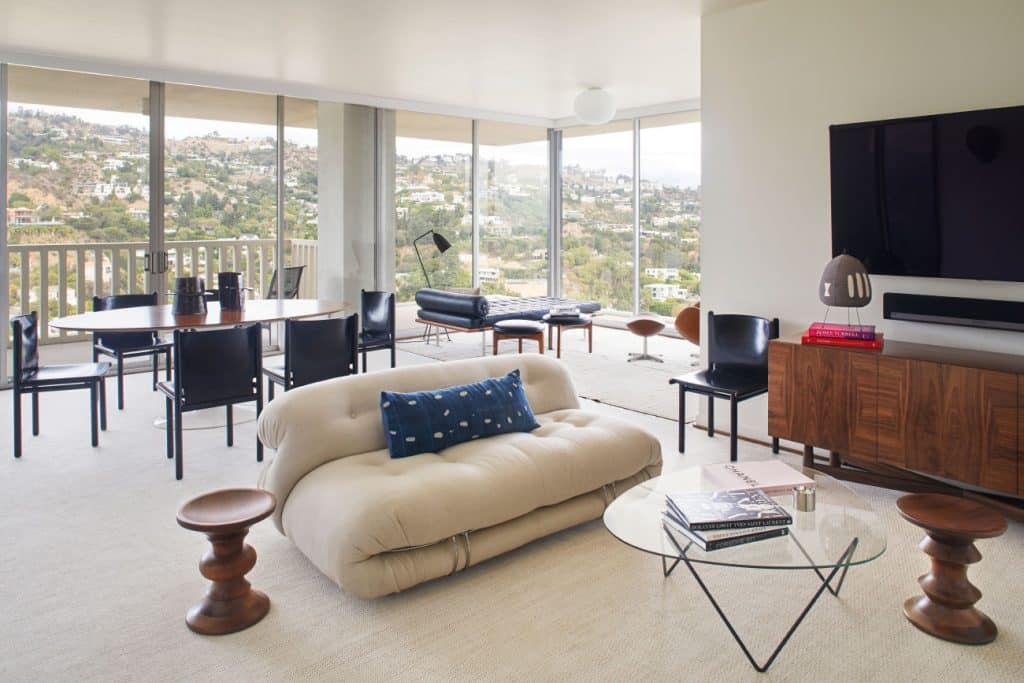 “This iconic mid-century building looks toward the Hollywood Hills and up Sunset Boulevard,” Roberts Morgan notes. “We placed the dining table in the middle of the two sitting areas to make the entire space all about the views.” The walnut Bronson cabinet is from Lawson-Fenning, and the dining table is from JF Chen. The room also includes a Soriana sofa by Afra & Tobia Scarpa and a pair of Eames walnut stools. 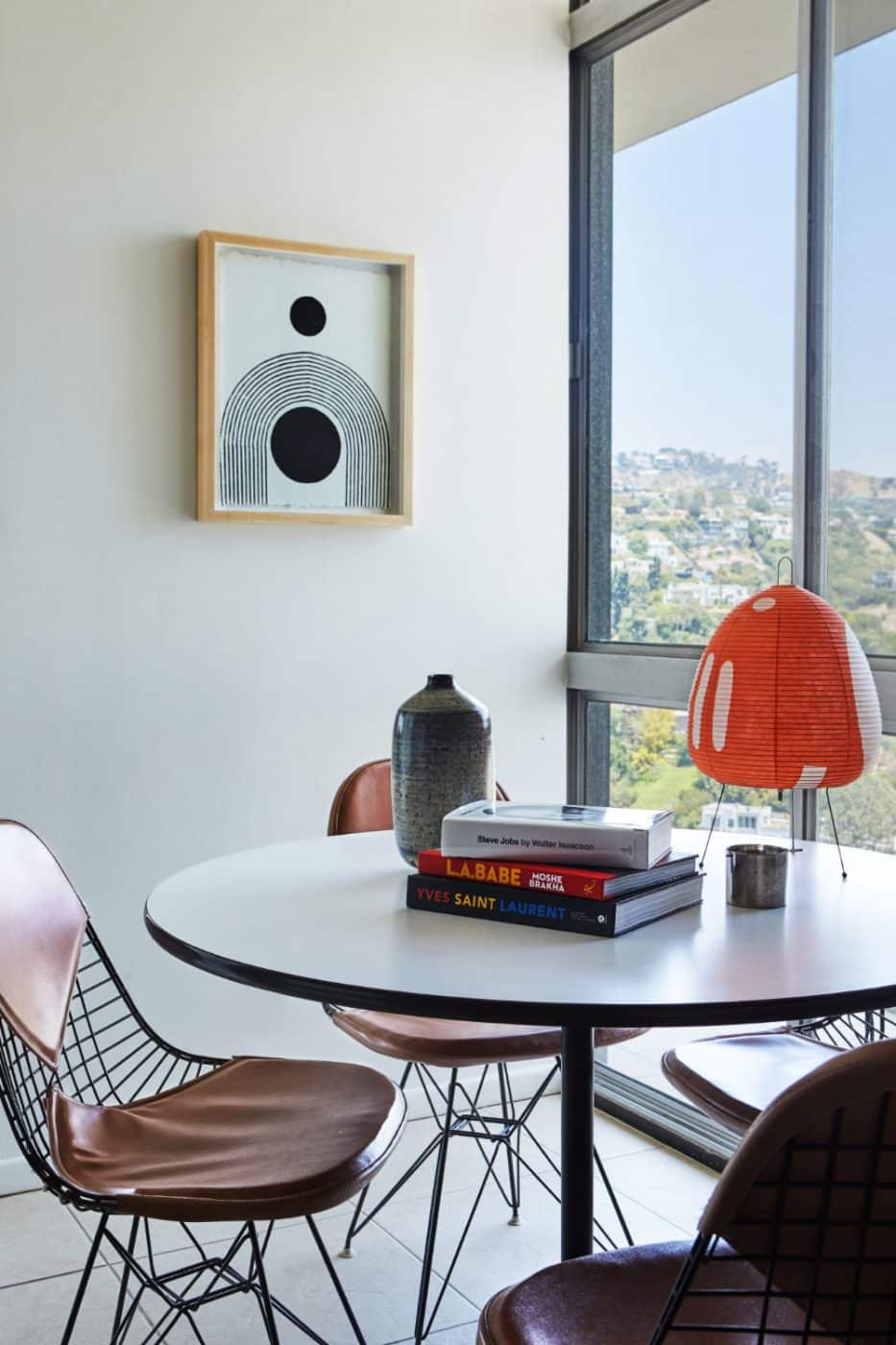 “In the kitchen, the dining set is the same vintage as the architecture of the building — classic mid-century.” The 1960s Eames for Herman Miller dining set from JF Chen is topped with a Natan Moss ceramic vase from Hollywood at Home and a Noguchi for Akari lamp. 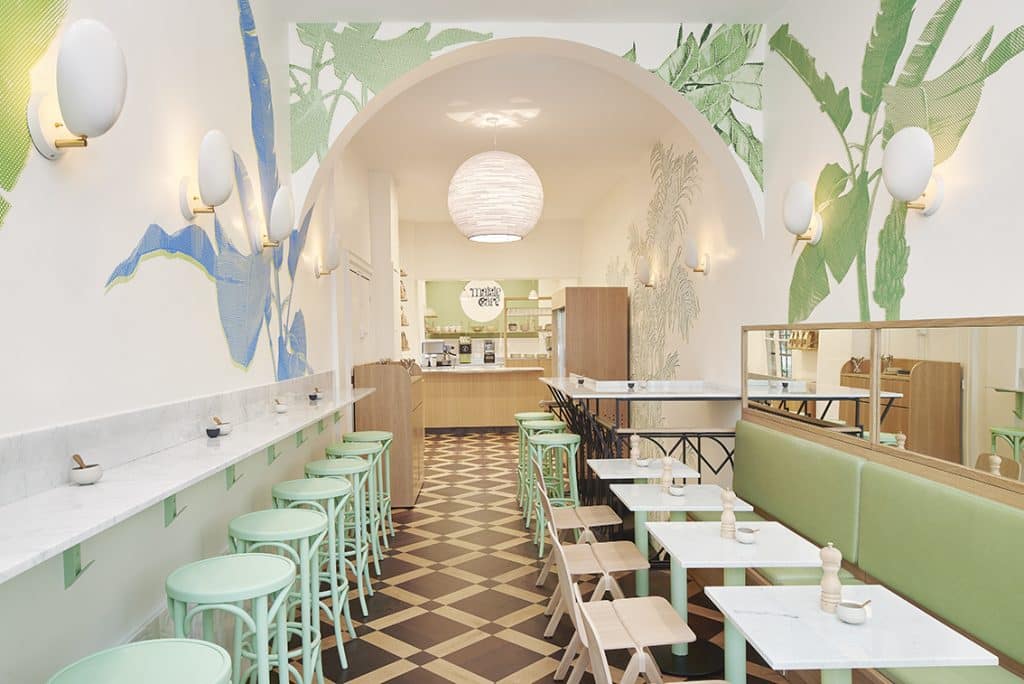 Her intuitive sense of what a space needs has been shaped by her experience. Like those other captivating women Carolina Herrera and Diane von Furstenberg, Roberts Morgan learned her craft not through the formal rigors of school or an apprenticeship with a screaming genius but by living a fascinating life. 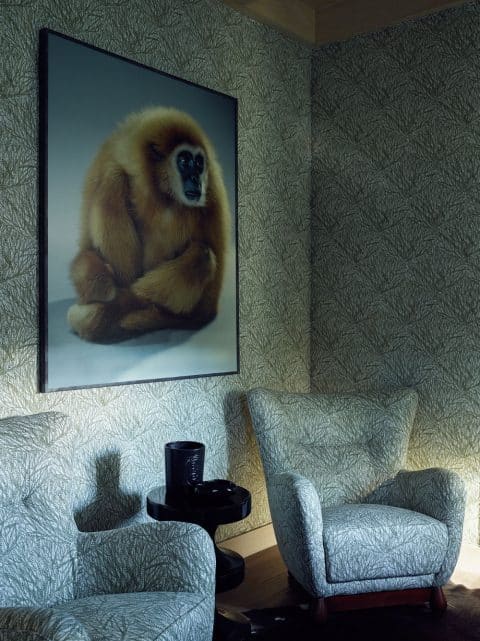 “I love print on print!” Roberts Morgan says. “In this powder room, the walls and vintage Danish chairs are upholstered in custom fabric I designed myself in collaboration with Christopher Farr Cloth.” The armchairs are from JF Chen; the photograph is by Jill Greenberg. Photo by Martyn Thompson

Raised in Arizona and Connecticut, she attended Miss Porter’s school in the latter state. Everything changed when, on a full scholarship to Cornell, she spent a semester in Paris. “I was a culture vulture from a very young age,” Roberts Morgan recalls. “I just romanticized art, Paris and café society.” At the end of the term, she decided to stay in the French capital. Her parents weren’t thrilled, but the allure of the city and a dreamy French artist boyfriend proved irresistible to the enchanted 19-year-old.

Her timing was excellent. This was the supermodel 1990s, when a handful of fashion goddesses kept the public riveted, and she landed a job in the studio of legendary fashion photographer Paolo Roversi.

A dashing British novelist named Simon Lane wooed and won her, and she spent the next five years traveling with him to extraordinary places. In the late ’90s, she returned to Paris, where she met Paris Vogue editor Joan Juliet Buck and began assisting her. Fashion was exciting, but after two years, Roberts Morgan became more intrigued with design and lifestyle. “I’ve always been fascinated with how people live, the worlds they create around themselves,” she explains.

The Beverly Hills home’s family room is “designed for lounging,” Roberts Morgan says. “The cluster of Petalo tables by Charlotte Perriand are practical design classics, easy to move around as needed — to put your feet on or hold a drink.” She designed the sofa, which is upholstered in Holly Hunt fabric and topped with vintage ikat pillows from Hollywood at Home. The Navire table lamp is from Atelier de Troupe. Photo by Sam Frost

She found a mentor in Ilse Crawford, then editor of Elle Decoration, and dove headfirst into design editorial, eventually becoming a regular contributor to the New York Times, whose Currents section she penned for nearly seven years.

Roberts Morgan’s design practice started with a phone call from the Paris-based designer India Mahdavi, whom she had featured in the Times. A couple had come to Mahdavi with a project she felt did not require the type of overhaul her office specialized in; rather, they needed someone with excellent taste who could offer them educated design guidance. She sent them to Roberts Morgan. That was 18 years ago. 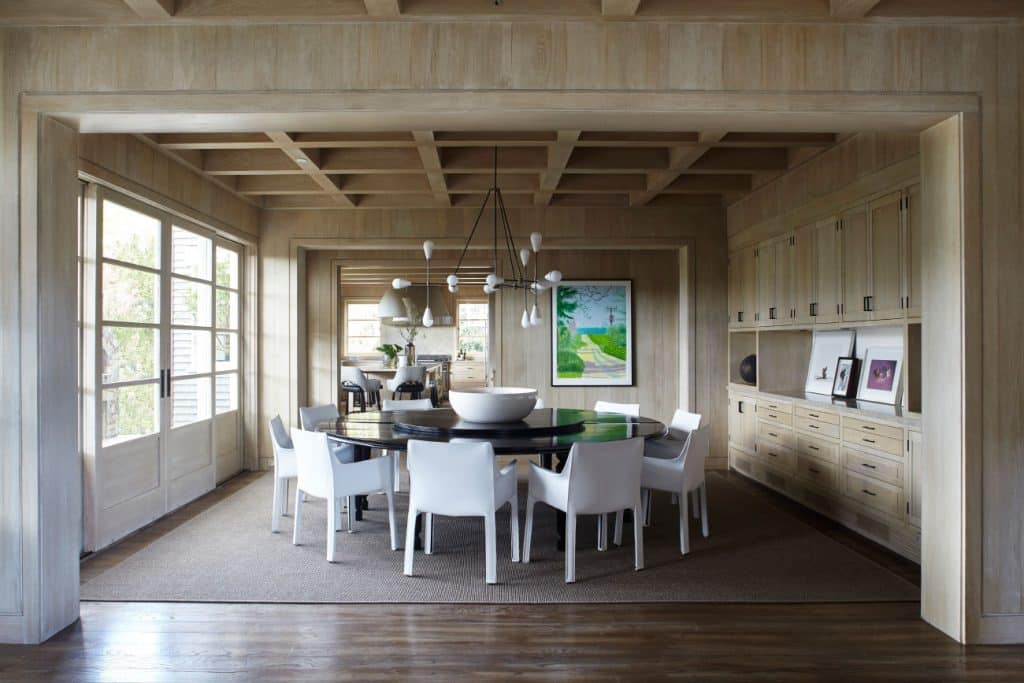 In 2008, Roberts Morgan relocated to Los Angeles to be closer to her family. The move set her on a path of discovery, chronicling the city’s emerging design and art scenes and championing creatives like Adam Silverman, Claire Tabouret and David Wiseman. 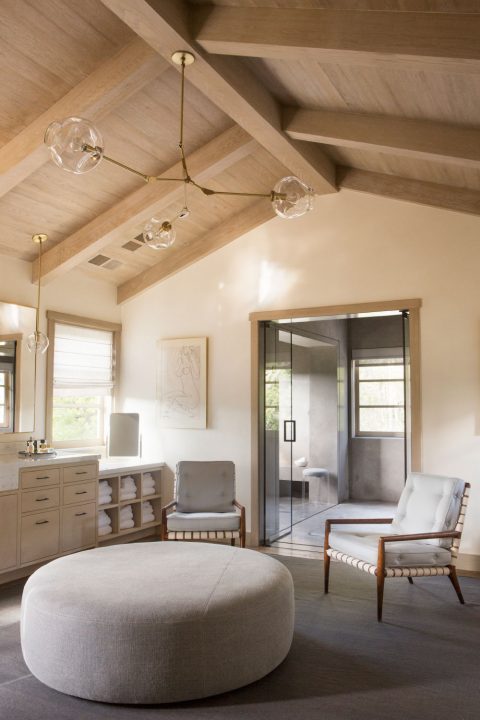 “One spends a good deal of time in the bathroom,” Roberts Morgan points out. “Why not make it one of the most special rooms in the house?” This master bath features a custom Lindsey Adelman light fixture and T.H. Robsjohn-Gibbings armchairs. The Jean Negulesco drawings are from Dragonette. Photo by Sam Frost

Enthusiasm for L.A. makers is evident in her interiors and will likely be expressed in her latest project, a boutique hotel collaboration in West Hollywood. “It’s continual research, exploring new tastes and trends and discovering new talent,” she says of her process.

In many of her projects, art is a jumping-off point. A Jean-Philippe Delhomme illustration of Andy Warhol and Jean-Michel Basquiat dining at Indochine was inspiration for her most Internet-famous project: Maisie Café, a vegan restaurant in Paris beloved by the fashion crowd. The vibrant interiors — bodacious palm murals by French artist Vincent Scali, mint green booths, chairs by the Bouroullec brothers — caused a sensation in 2016. “It’s Parisian chic meets L.A. sunshine,” Roberts Morgan says of the look, the love child of two distinct worlds that, like the designer herself, has proved a stellar success. 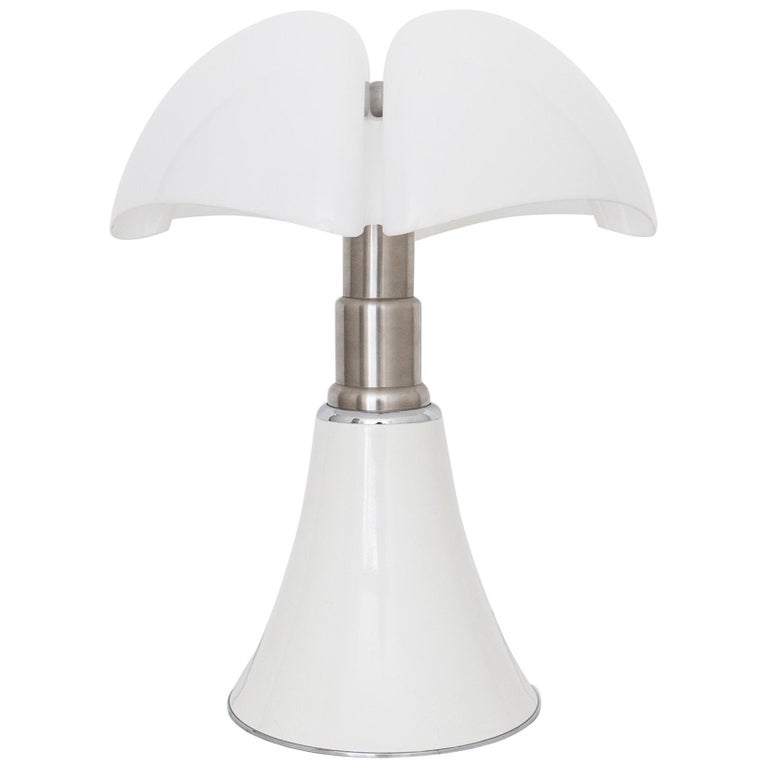 “Anything by Gae Aulenti is fine by me! The Pipistrello lamp is one of my all-time favorites. Everyone should have one! I’ve got an example sitting on my desk, and it makes me happy every day.” 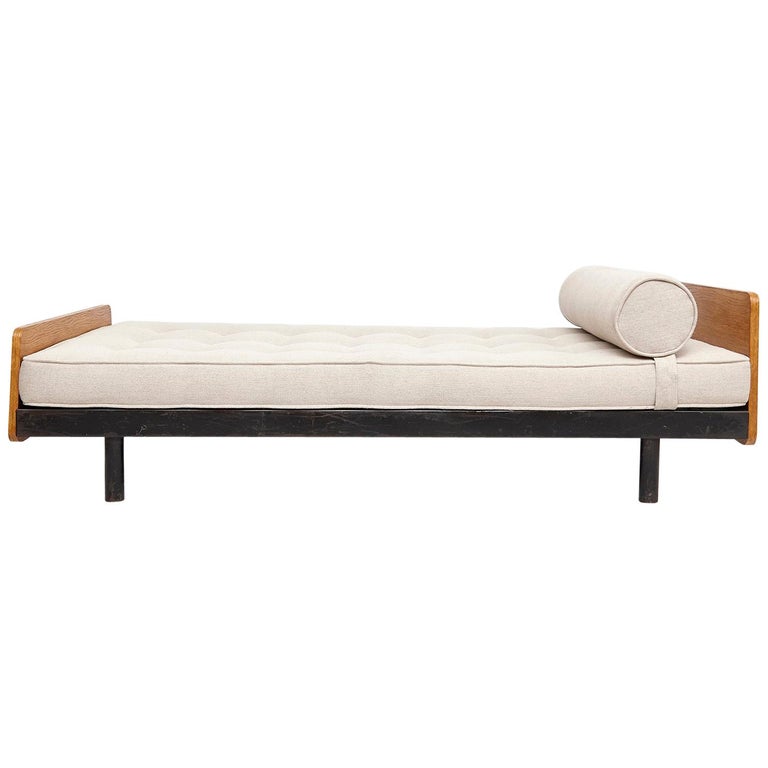 “A divine Prouvé daybed is forever chic, as well as a great investment piece.” 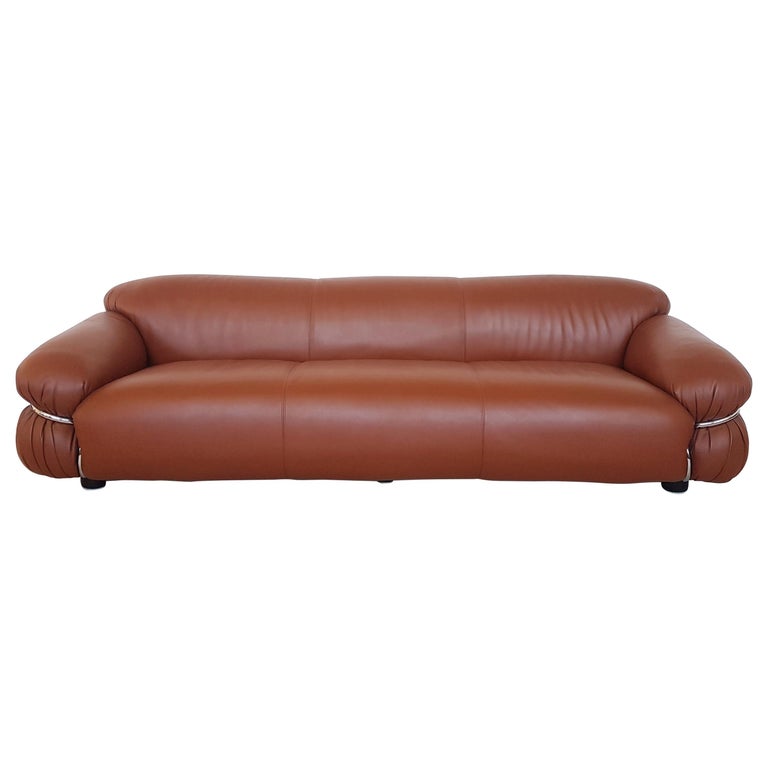 “Comfortable, stylish and made to be lived on, Italian leather sofas are the best! I especially love some of the Cassina classics from the seventies, such as this Gianfranco Frattini design.”

“I love a sturdy coffee table you can put your feet on! This beautiful Angelo Mangiarotti piece in marble is a design classic and a true beauty.” 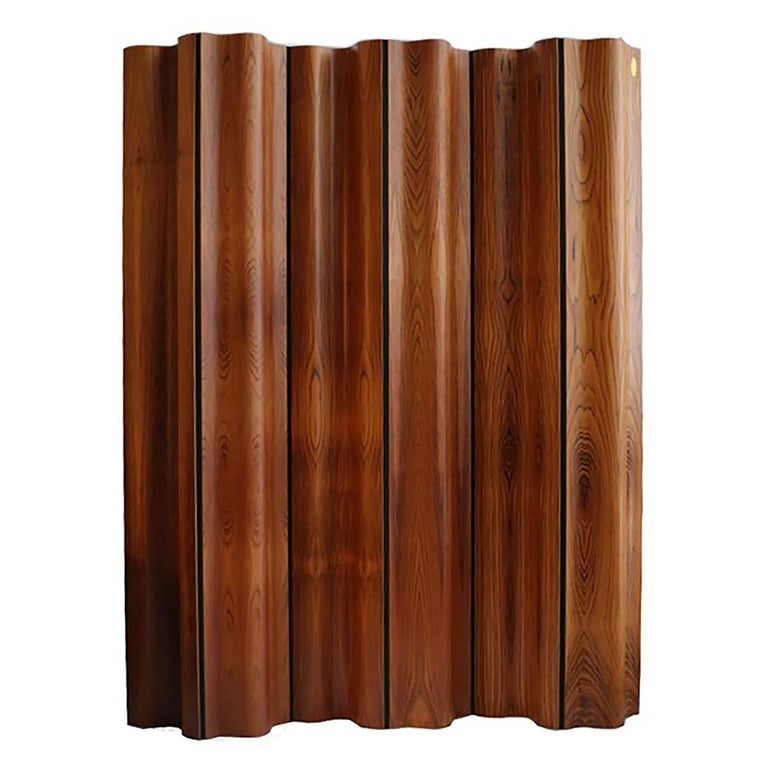 “The Eames for Herman Miller foldable screen is one of the most useful design classics ever. It can divide, hide and add warmth to any room. In my portrait photo, you see one in ash in my living room. This special rosewood edition is also stunning.” 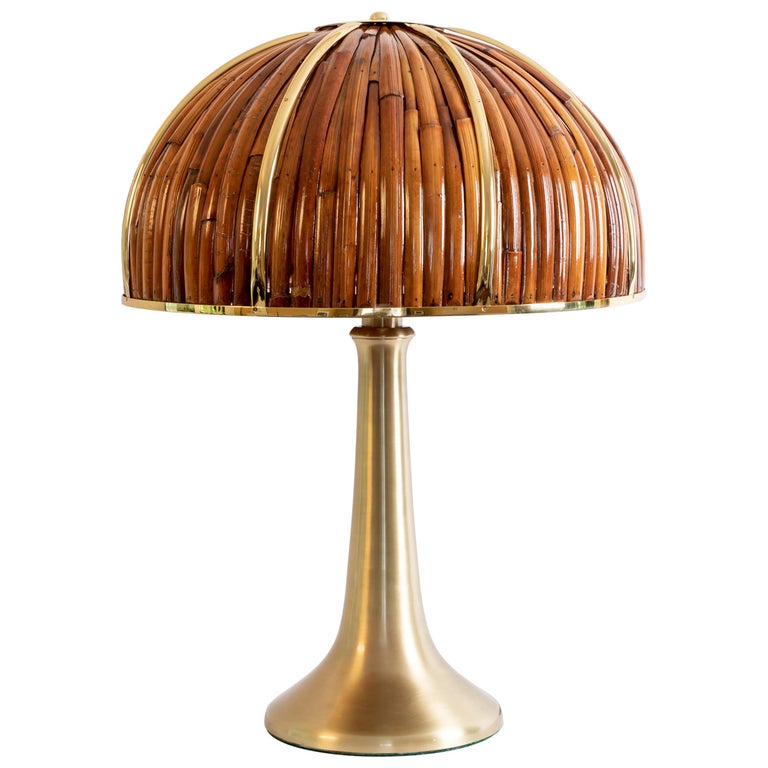 “I always say great pieces can go anywhere. Anything by Italian artist-designer Gabriella Crespi is like adding a piece of jewelry to a room.”