For our latest exhibition, "nfttime," Mark Amerika brings together several digital-art pioneers to show what magic they can create with NFTs.

December 19, 2021Exactly one minute after many worried a computer glitch known as the Y2K bug would crash worldwide infrastructures, artist Mark Amerika predicted the future would be remade by digital currency. In a Wall Street Journal article by Sarah Lueck about alternative currencies that ran on January 1 at 12:01 a.m., Amerika referred to “digicash paracurrencies,” digital money named after corporations and celebrities that he believed would become a cornerstone of the digital economy.

At the time, Amerika’s opinion on the future mattered more than most people’s.  In 1997, just four years earlier, he had launched Grammatron, a sprawling link-based novel with a soundtrack and thousands of narrative threads that attracted the attention of millions. It received coverage in all the international newspapers, art and culture magazines and made headlines on CNN’s nightly news. W magazine described Amerika as “the closest the web has to an art star.” In that novel, he floated the idea of digicash: emerging coins in the virtual realm.

Few paid much heed to Amerika’s WSJ prophecy, however. Now, he has curated “nfttime,” an exhibition and auction on 1stDibs that illustrates not only the truth of his predictions but also the visionary nature of creatives who worked with digital media before the market could support their work. In addition to Amerika, the show features Carla Gannis, Joan Heemskerk, Sophie Kahn, LaJuné McMillian, Rick Silva, John F. Simon Jr., Yoshi Sodeoka, Anne Spalter, MTAA and Katie Torn. These artists, spanning two generations, are each pioneering in their own right.

As Amerika’s idea of digicash aptly demonstrates, what artists envisioned before anyone had considered the idea of an NFT marketplace continues to fuel the present — a concept that plays out in “nfttime.” The title riffs on nettime, an international digital-art-and-culture group-email list, founded in 1996, where the term “net art” — art that uses the Internet as a medium — first took root.

If “nettime” alludes to the different speeds of the Internet and the feeling of being out of time while online, “nfttime is a new kind of time where everything accelerates and fragments in unpredictable ways.” says Amerika. “For me, the exhibition is a way to revisit and create some newfound art-historical relevance to nineties net art in light of the ‘nfttime’ we are now experiencing, in real time.”

NFTs, short for non-fungible tokens, are unique, noninterchangeable units of data stored on a digital ledger. To explain, where Bitcoin is fungible — exchange one coin for another and you’ll get exactly the same thing — non-fungible works are unique and can’t be traded for exact replicas.

The acceleration Amerika identifies refers, in part, to the volume of work artists are currently making and selling. “I can’t keep up,” says exhibition participant Simon, a Brooklyn-based new-media artist who uses computer screens and programming language as the basis for much of his work. His custom software generates visual elements in real time — the speed at which NFTs are now exchanged. His pieces include plotter drawings, acrylic sculptures and wall-mounted screens that display unpredictable colored patterns and movement.

“People were making digital art for years with no way to distribute and no hope to get any value from it,” says Simon, who attributes the blooming of NFTs at least in part to the stockpiles of digital cash built up over the past decade, when very few places existed to spend it. “All of a sudden, a store opened in the desert,” he explains. “So, there’s a real outpouring [of artwork], and you’re seeing incredible, incredible stuff.”

According to Simon, perhaps one of the best-known technology artists from the 1990s, digital art’s scant early market directly impacted his aesthetic. “To generate income, my work got more and more sculptural because that was the side that aligned best with the art world,” he says, referring to how his “art appliances” — sculptural wall hangings with LCD screens — eventually became sculptural wall objects without screens.

For the 1stDibs auction, Simon reprised his early sculpture Complex City, 2000, which he remade as Traffic HD for the Streaming Museum in 2010. The videos — a series of colored squares flowing over a grid — came from a software program and draws inspiration from the square patterns in Piet Mondrian’s painting Broadway Boogie Woogie (1942–43).

“Anyone thinking about computer graphics has to be thinking about grids, and so, the design aspects of a Mondrian composition are immediately understandable,” says Simon.

Computer traffic simulation, which saw early success in computer science, is also a touchstone for his work. “The software used simple rule sets, which is another great quality of generative art,” explains Simon, referring to art using systems or code to create unpredictable outcomes. “You start with a simple rule set and generate great complexity.”

Heemskerk, one half of the famed Dutch net-art collective JODI, values the complexity and variation associated with generative art. “I don’t like to produce stable work,” she tells Introspective. JODI made a name for itself in the early ’90s by making websites often filled with links but no navigational cues. Even today, the sites provoke anxiety — it does not feel safe to click on unidentified links that download unnamed files.

For “nfttime,” Heemskerk produced an equally eerie new work. Her website, 0X[Y].gen 0.1, changes from black to gray to white depending on the time of day, while artificial intelligence produces silhouettes of faces almost too subtle to discern in the background. The code ensures that the site transforms constantly, like a living organism.

Like most digital art, pre-NFT websites were not easy to sell, a reality Heemsherk lamented. The first website offered at a major auction house, Rafaël Rozendaal’s ifnoyes.com, brought $3,500 in the 2013 “Paddles On” sale at Phillips.

Mounted in partnership with Tumblr and billed as the first digital-art auction, “Paddles On” drew a younger and louder crowd than the typical hushed auction audience. Collectors, even serious ones, didn’t take their purchases too seriously. “It’s fun that it was the first website sold,” Benjamin Palmer, CEO of the advertising company Barbarian Group and the winner of Rozendaal’s creation, told me back then. “But more than that, it’s the most accessible piece of public art I could have purchased.”

“Paddles On” signaled a widening acceptance of the digital field by the mainstream art world but did not pierce more deeply than that. It also revealed a unique relationship to art history in the work of many artists, from Laura Brothers’s Dada-like titling paired with Op art–inspired glitch collage to the Rembrandt figures of Jeanette Hayes, literalizing their exit from the canvas.

At the time, Sophie Kahn, a Brooklyn-based artist included in “Paddles On” and a pioneer in 3D rendering, explained her work as a response to the failure of technology to capture life. However, unlike many artists’ digital work, Kahn’s needed 3D printing. “Until recently, the 3D niche was the place I closely occupied,” she said. Now, thanks to the NFT boom, she can sell both physical and digital versions of her pieces.

For “nfttime,” Kahn built on the headless 3D-printed figure she sold at Phillips, producing Triple Portrait of E: RGB, dv1. The fragmented but restful head, in 3D with augmented reality, imperfectly condenses five minutes of the sitter’s life — a compression of time and movement not unlike that achieved in Marcel Duchamp’s 1912 painting Nude Descending a Staircase (No. 2). Like the creations of many innovators in this show, Duchamp’s work felt foreign enough to audiences that he had to fight for its inclusion in exhibitions. (It took a full year before it was finally displayed at the 1913 Armory Show in New York, where it was greeted with hostility.) Before NFTs, the traditional art market often marginalized 3D, net and other digital-art forms.

“One of the things I’m asking is, how does machinic vision see text and images and express it in visual form,” explains Amerika, who answers this question using VQGAN and CLIP, two separate machine-learning algorithms that together generate images from text and image prompts.

“This is a style that’s not really out there yet,” he says, noting the translucent qualities of the light in the video. It took the world two decades to catch on to the potential of digital currencies he spoke about in that Wall Street Journal. Now that we live in nfttime, the future his work represents is well within our grasp. 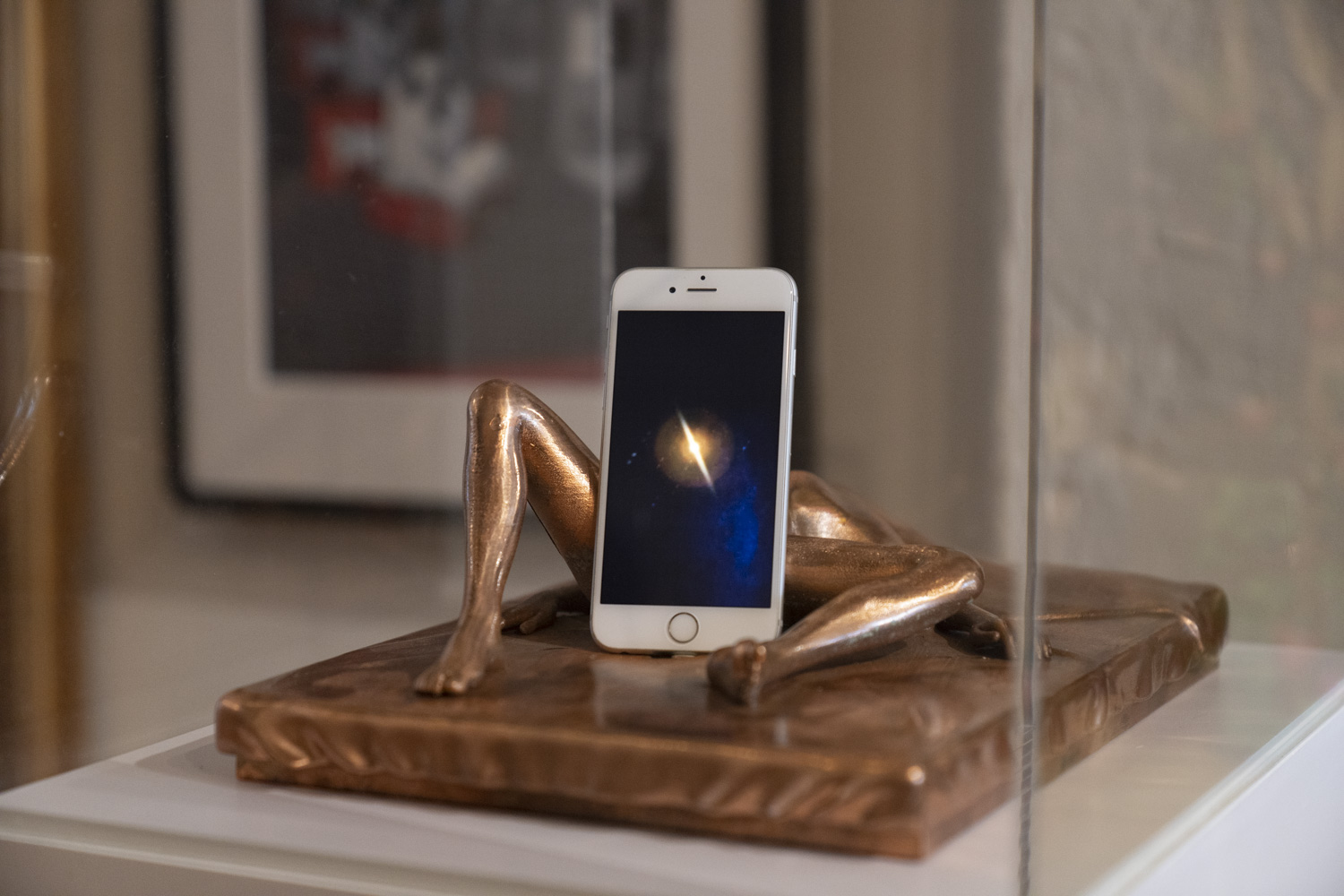 Explore the “nfttime” Exhibition
Shop All