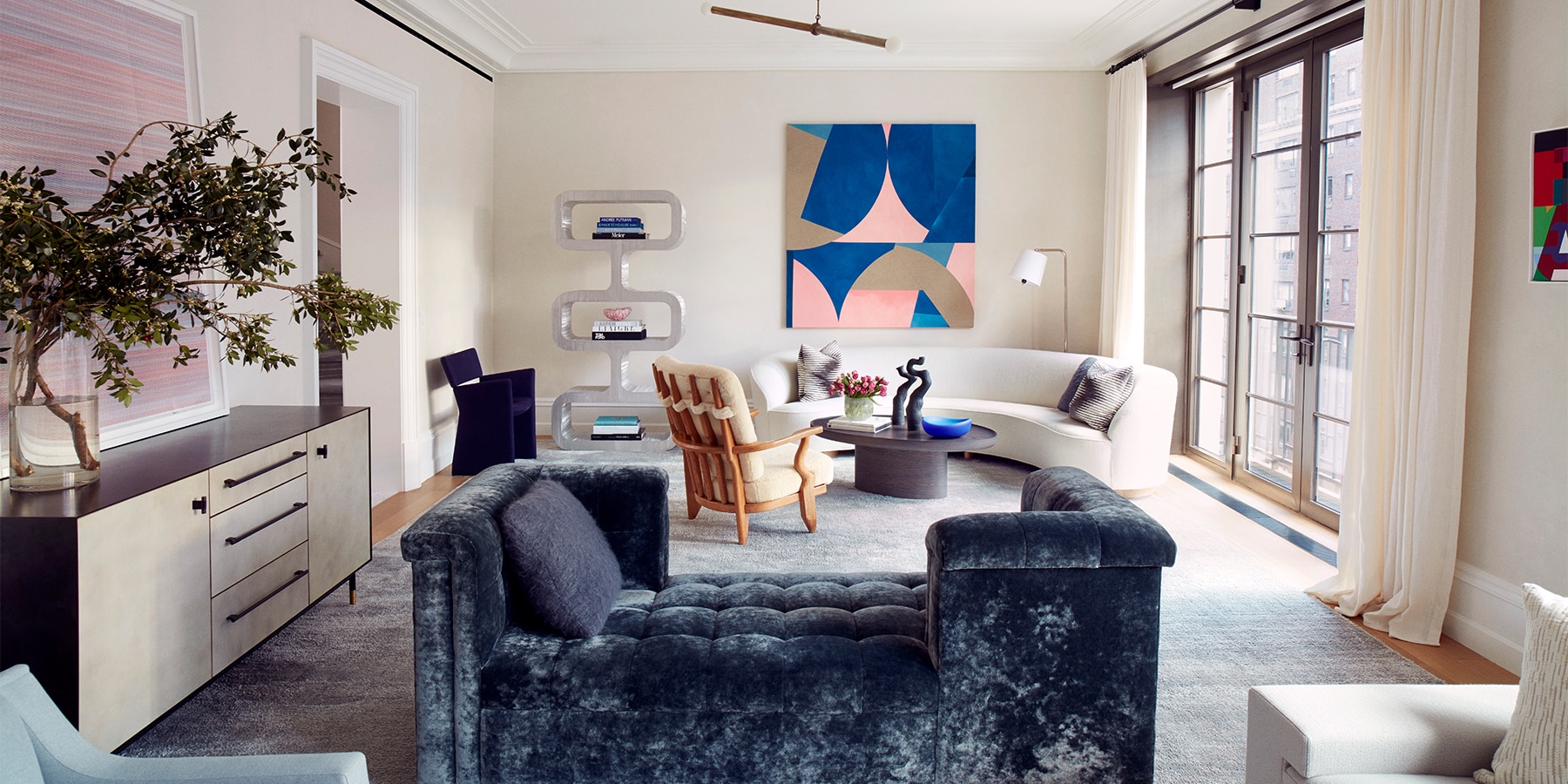 The designers at Meyer Davis — who create hotels in addition to homes — have fashioned a most hospitable apartment on Manhattan's Upper East Side.

Meyer Davis, the interiors firm founded in 1999 by Will Meyer and Gray Davis, is best known for its design of dozens of hotels (the Rosewood in Little Dix Bay, in the British Virgin Islands; and Mauna Lani, on the Big Island of Hawaii are two of the most recent). These projects have given the studio, which has offices in New York and Los Angeles, experience creating “comfortable, durable and livable environments,” says Davis. And the firm draws on that when it is asked to design private homes.

Bostonian Katie McPherson, who has been with Meyer Davis for 10 years and is now a director at the firm, and the British-born Josh Suckle, who joined in 2013 and is a senior designer, both have extensive residential experience. At Meyer Davis, they often work together on houses and apartments (as well as Ritz-Carlton and Four Seasons hotels). McPherson calls Suckle “the client whisperer” for his ability to match designs to desires. 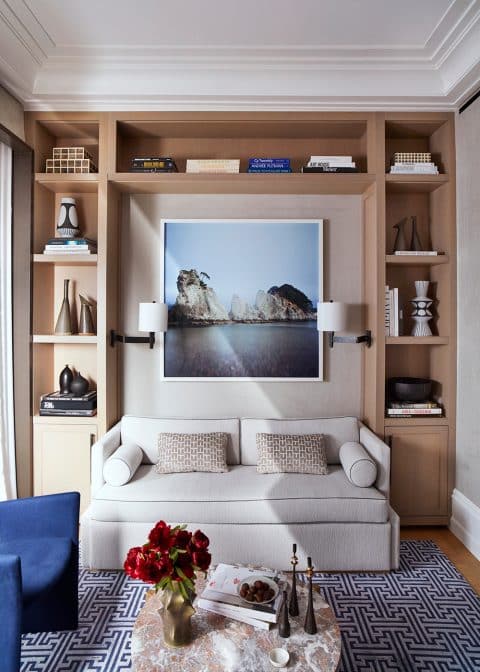 In the home office of a duplex on New York City’s Upper East Side, Katie McPherson and Josh Suckle — designers with the firm Meyer Davis — placed a slim-armed custom sleeper sofa between built-in bookshelves, laying a David Hicks–esque area rug underneath. Top: The apartment’s living room contains two seating areas. In the foreground is a tête-à-tête upholstered in crushed velvet; beyond it, a 1960 Guillerme et Chambron armchair faces a Vladimir Kagan sofa. The artwork is by Darren Almond. All photos by Christopher Sturman

Not long ago, a couple with two grown children purchased a duplex apartment in a new building on the Upper East Side of Manhattan and asked Meyer Davis to do its interiors. The husband and wife had seen photos of the firm’s Tennessee farmhouse, where occasional pops of pale blue enliven an otherwise neutral, but highly textured, palette. (It’s no ordinary farmhouse.)

The New York apartment had a lot going for it, including north- and south-facing windows, 10½-foot-ceilings and lots of woodwork. But, Suckle says, “there was a heaviness that we wanted to change.” The floors were dark, as was the trim around the doors. “The client wanted it to be lighter and airier,” McPherson adds. So the designers sanded down the existing white-oak flooring and finished it with clear matte polyurethane for a pale, natural tone. Moldings and trim were painted white.

Another problem was that the Sheetrock walls seemed insubstantial. The designers covered some in fabric, others in mottled Venetian plaster, to give the apartment gravitas it previously lacked. Now, it no longer feels like new construction, but like a place with a rich history. Here, Suckle and McPherson take us on a tour. 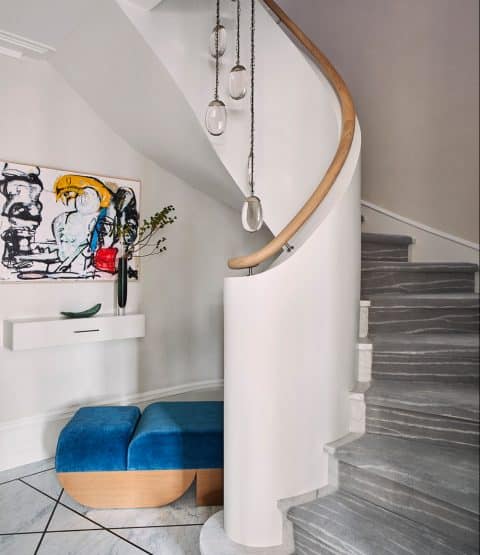 “The stairway is the first thing you see when you walk in. It sets the tone,” says McPherson, noting that the original “spindly metal railing” felt flimsy. She and Suckle replaced it with a low wall of curved plaster topped by a light oak rail. Designing its elegant curves “was a labor of love,” says Suckle. An artwork tall enough for the wall at the back of the stairs wouldn’t have been fully visible from anywhere. So, instead, the designers hung a 14-foot-long pendant lamp through the opening created by the stairway’s curve and mounted Eddie Martinez’s Yard Work #6, from 2017, on an adjacent wall. Tucked under the stairs is an oak and blue-cotton-velvet ottoman that’s functional but also so sculptural that “it can almost be interpreted as art,” says Suckle. Overall, he adds, the new stairway sets a tone of “understated luxury.” 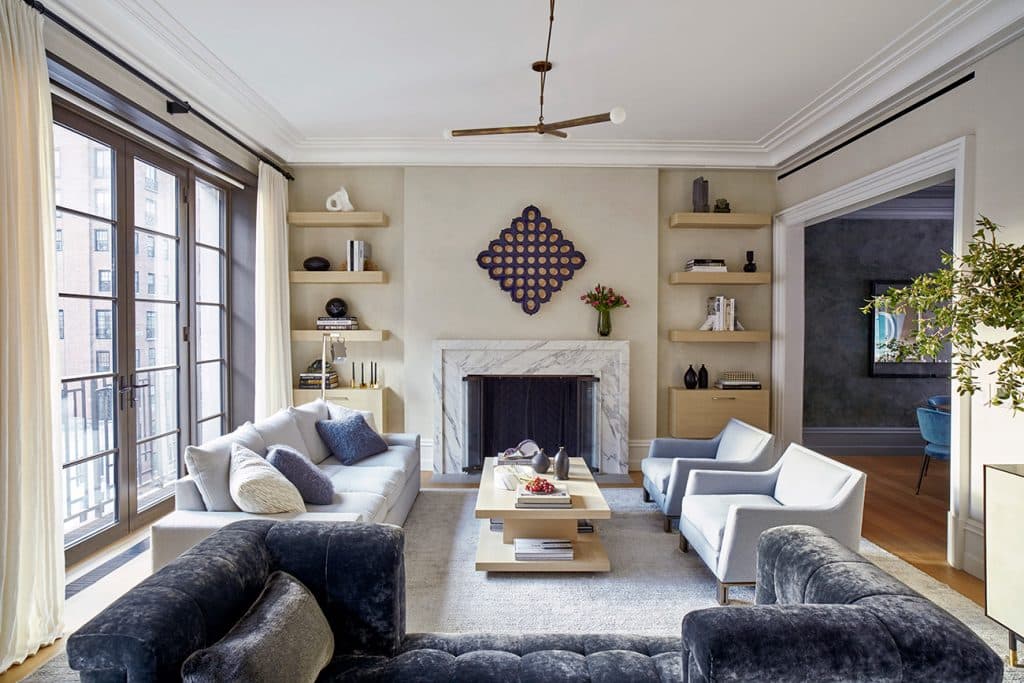 The clients wanted a room intimate enough for nights when they’re alone but grand enough for parties. That meant providing myriad places for people to sit — comfortably. “The client tested all the seating,” says McPherson. “She was adamant that while it should look good, it also needed to feel good.” The custom tête-à-tête is upholstered in crushed velvet. The sofa is covered in sky blue and blue gray fabrics, from Larsen Textiles and Castel Maison, respectively. The effect is a kind of symphony of complementary blues. 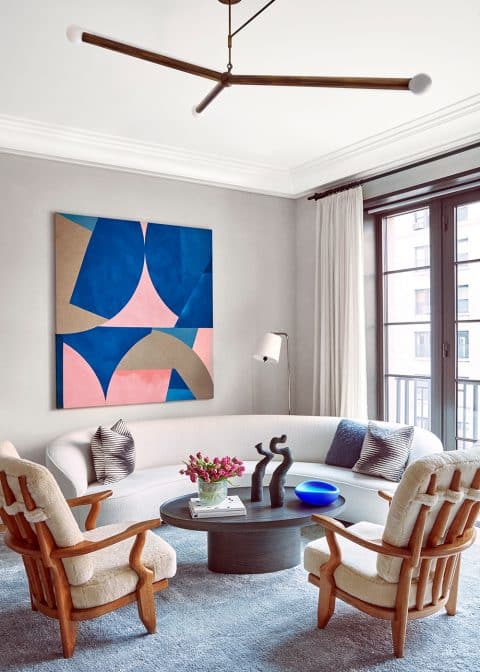 The original fireplace was, the designers say, “generic.” They created a new one of Calacatta Gold marble surrounded by floating oak shelves. Overhead, there was only one electrical junction box, in the center of the ceiling. The designers wanted to give the long room more than one fixture, but the building’s concrete-slab construction meant there was no way to add another J-box without dropping the ceiling. “There were many conversations about what to do,” says McPherson. Eventually, they decided to hang a pair of large Arrow fixtures, in tarnished brass, from Apparatus Studios with a custom stem/armature that links them to the existing J-box.

The designers call the other end of the room the “living lounge.” The space “was feeling a little rectilinear,” Suckle says, “so we decided to use a curved sofa” —  designed, no surprise, by Vladimir Kagan and purchased from Holly Hunt. It faces a pair of circa 1960 Guillerme et Chambron armchairs, which came from MORENTZ and are upholstered in shearling. “We couldn’t find a better-looking back of a chair,” observes Suckle. The designers brought some verticality to the mix with a sculptural Ornella bookcase by Agrippa. The saturated colors of the owners’ artwork here, Opening Blues by Sarah Crowner, pop against the largely neutral backdrop. 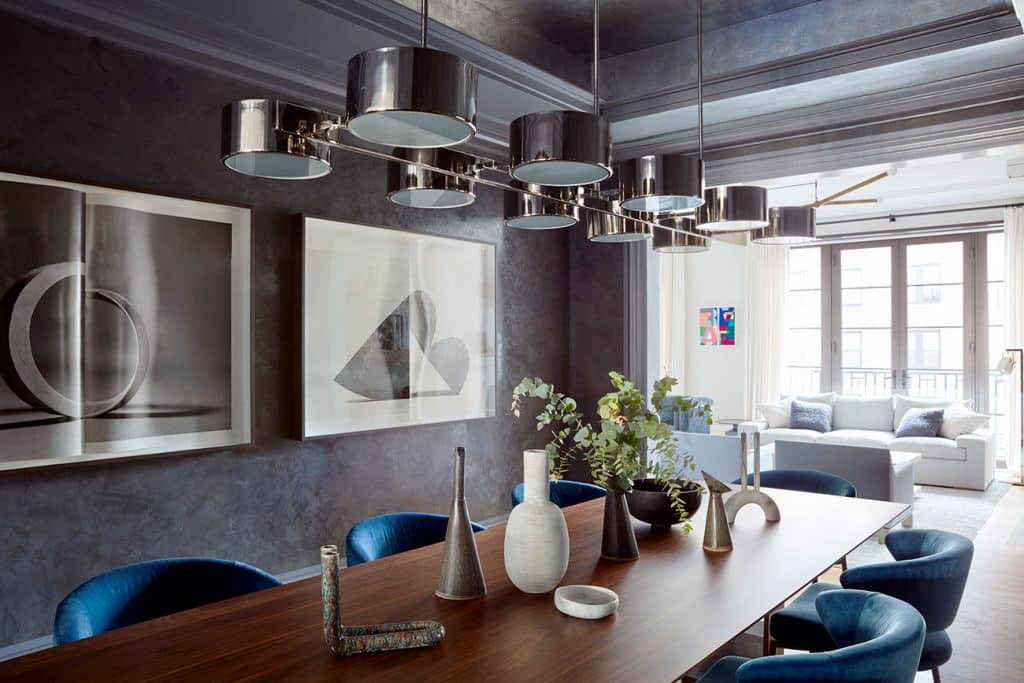 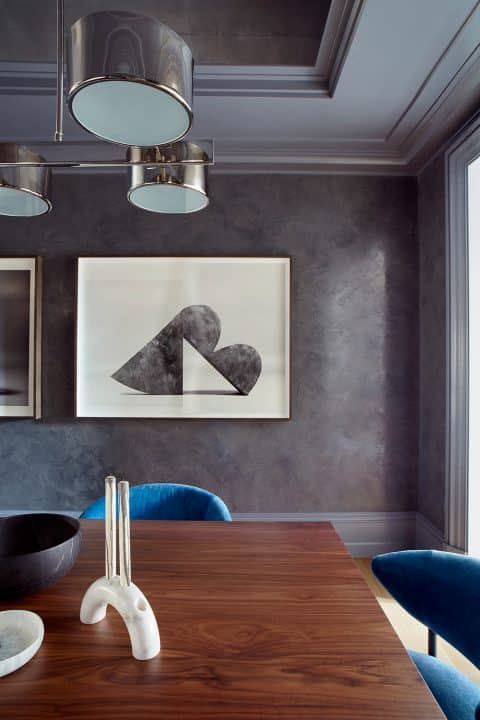 The apartment’s kitchen is open and airy. So, the designers decided to create a contrast by making the dining room dark and moody. They wrapped the existing recessed ceiling in a silver-leaf Phillip Jeffries wallcovering, creating a shimmery, mirrory “sky.” They also painted the moldings a high-gloss gray and gave the walls a Venetian-plaster finish.

The dining table, whose 10-foot-long walnut top rests on a white Carrara marble base, was designed by Giuseppe Viganò and manufactured by Porada Arredi. (It had to be hoisted into the apartment using a crane.) The chairs are from Minotti. “The curvature of the chairs breaks up the straight lines of the smallish, rectangular space, making the room a little more inviting,” says McPherson. The light fixture, made by John Salibello after a Stilnovo design, echoes the chairs’ curves, as do the owners’ pottery and Erin Shirreff prints. 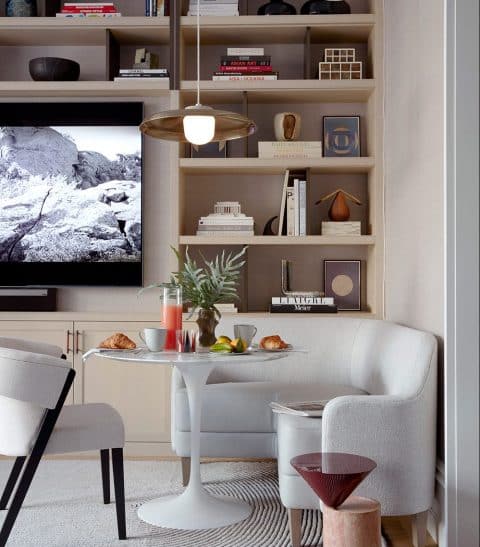 The owners, Suckle says, “aren’t going to eat at the ten-foot dining table when it’s just the two of them.” So the designers made room for a breakfast nook in a corner of the family room. A custom loveseat wraps around a white Eero Saarinen Tulip table. A marble and lacquer side table by De La Espada adds pops of pink and burgundy. “We used color sparingly,” notes McPherson. Above the table is a Hoist fixture, part of the Meyer Davis Studio’s lighting collection created with Rich Brilliant Willing. The light hangs from a swag that connects it to a J-box elsewhere in the room. Beneath the table is a wool Tibetano rug that, McPherson notes, makes a strong statement with its “topographic map meets thumbprint” texture. 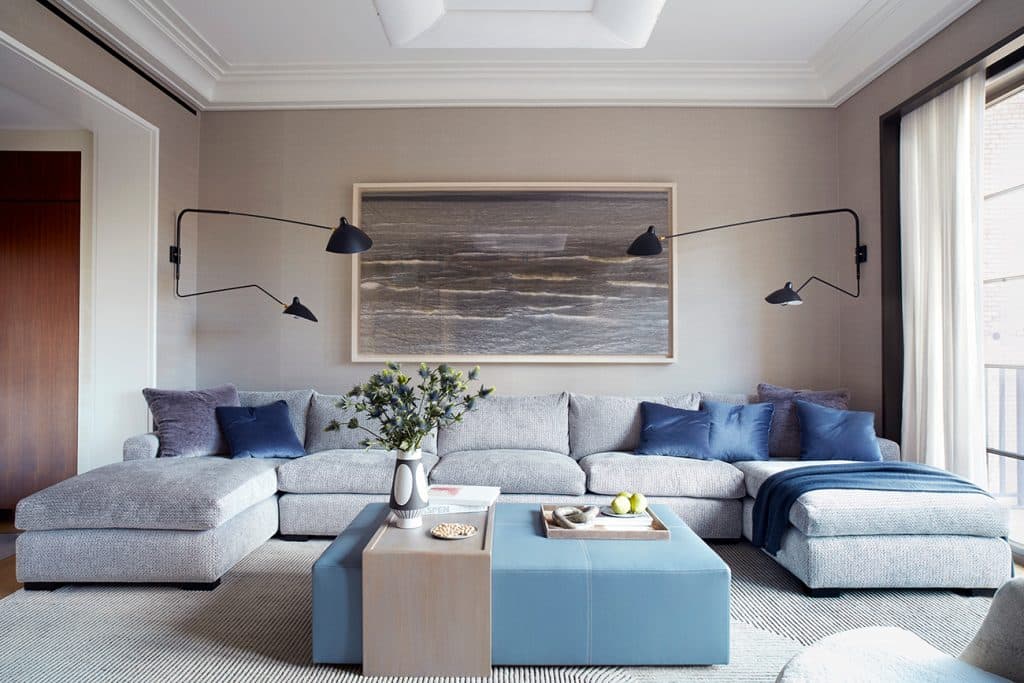 When it came to the den, the clients asked for a sofa on which “everyone could get a prime seat,” says Suckle. The piece he and McPherson chose is big enough for four adults. “We love the plumpness of the pillows,” he says, explaining, “The crowning effect is very intentional.” The custom Meyer Davis ottoman is so big, the designers note, that the clients and their kids don’t have to argue about who can put their feet up. The swing-arm lights are Serge Mouille reissues purchased from Tanguy Rolin through 1stdibs. Above the sofa is an untitled Richard Misrach photograph from 2007. 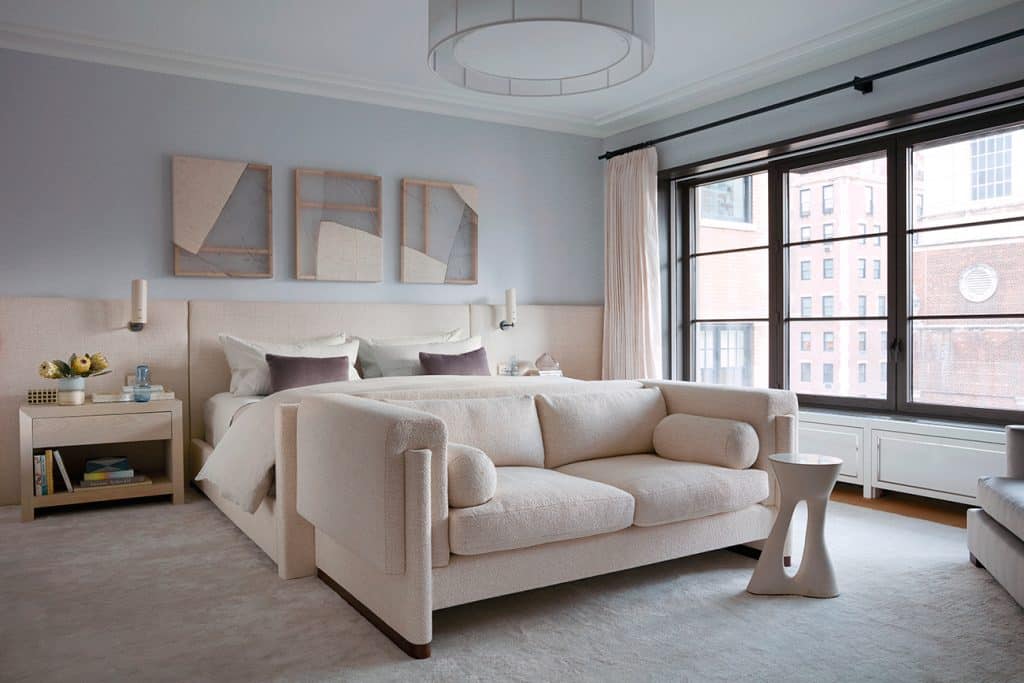 The directive for the master bedroom was to make it serene, relaxing and soft. That meant the focus shouldn’t be on any particular piece of furniture. “It’s really an anti-design statement,” says McPherson. The custom headboard — above which hangs a 2018 Martha Tuttle triptych titled Plainsong — is covered in the same ivory Pierre Frey fabric as the Egg Collective sofa at the foot of the bed. The wall covering is a Japanese washi paper from Phillip Jeffries. The mid-century Dutch sconces were bought from Mass Modern Design on 1stdibs, and the custom ceiling fixture is a drum wrapped in sheer ivory linen. “The light it gives off is soft and warm,” says McPherson. 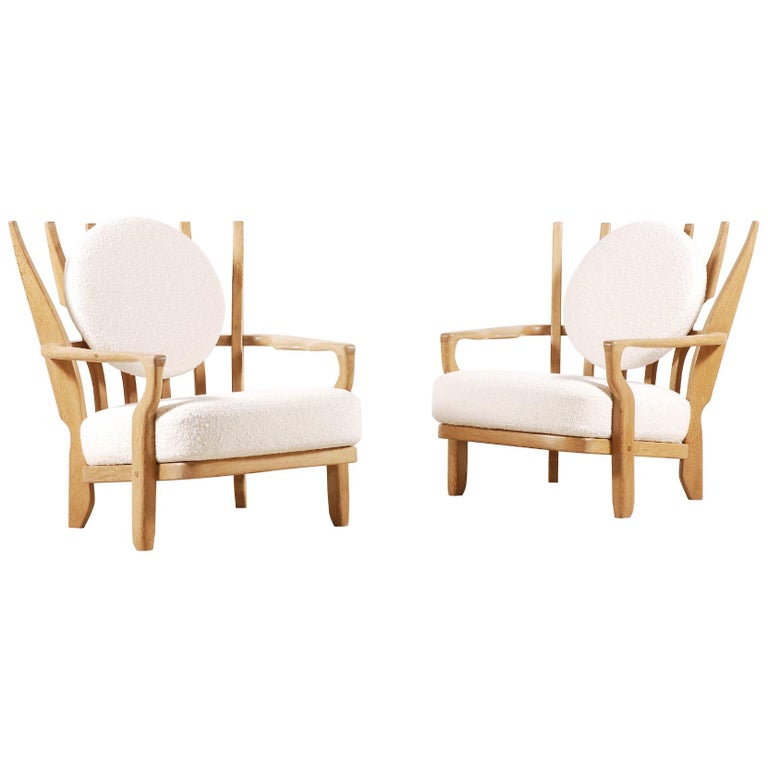 “We know Guillerme et Chambron are having a moment,” says Suckle, “but we can’t help that we are fans. Somehow, these chairs both create a sense of glamour and evoke visions of Middle-earth.” 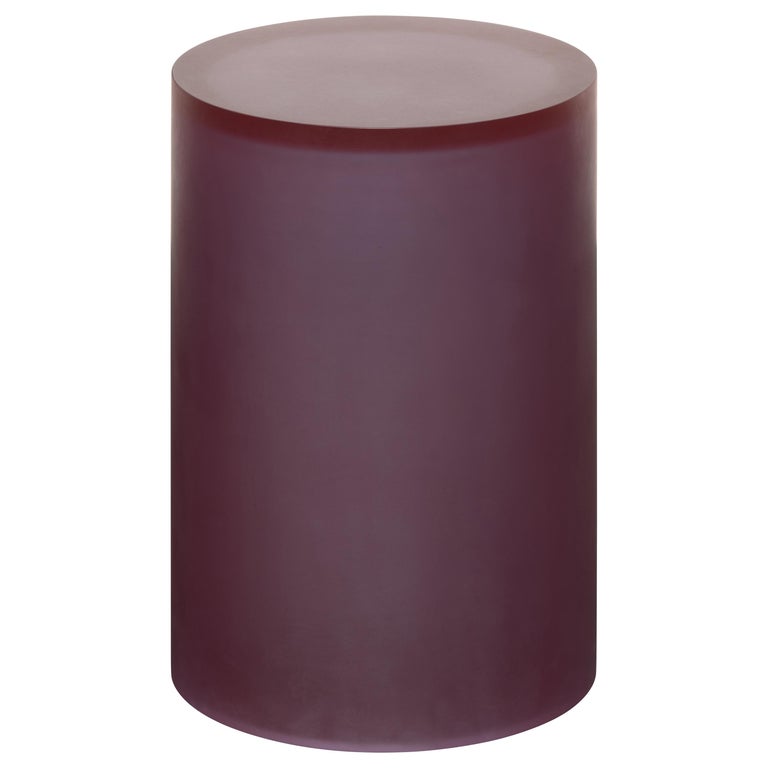 “This matte-resin table adds a gorgeous pop of color in an unexpected material,” says McPherson. “Its classic form means you could put it anywhere.” 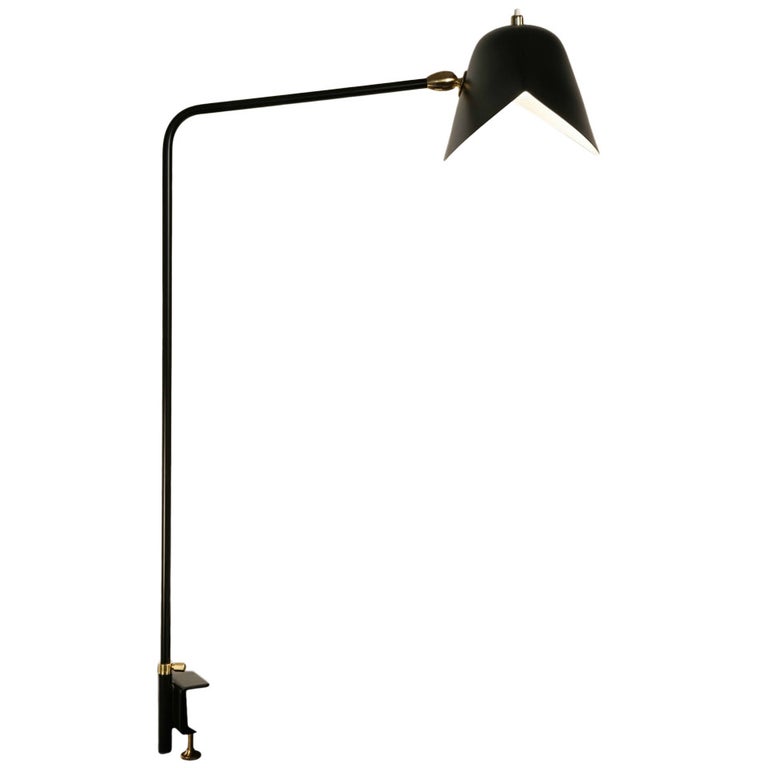 “This is a great piece that will feel at home in any office or workspace,” says Suckle. “It’s a classic, and it holds its own next to all of the contemporary options available.” 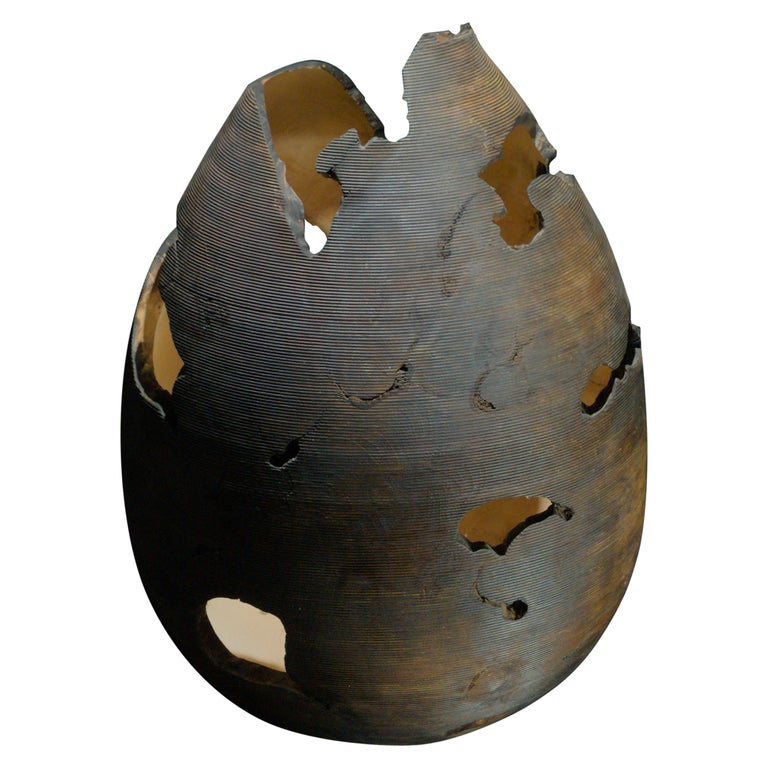 “The natural details of this turned-cypress vessel tell a story, and the texture creates a lovely pattern,” says McPherson. “It’s an amazing centerpiece or focal point for any room — sure to be admired.” 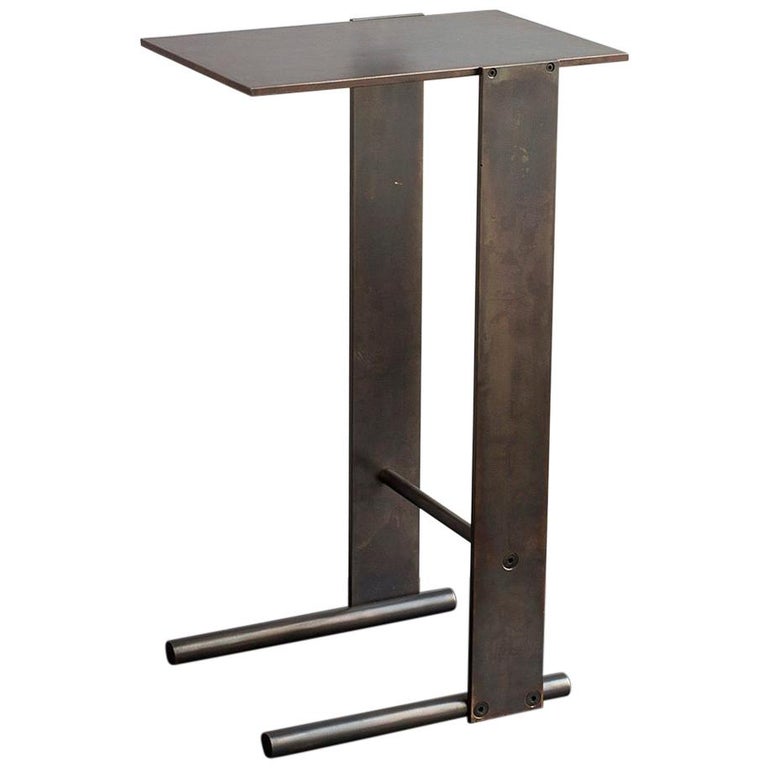 Says Suckle, “Drinks tables are necessary in any great living room. The finish of this piece adds warmth to its almost brutalist form. We also appreciate the exposed-screw and tube base. It’s playful in an unexpected way.” 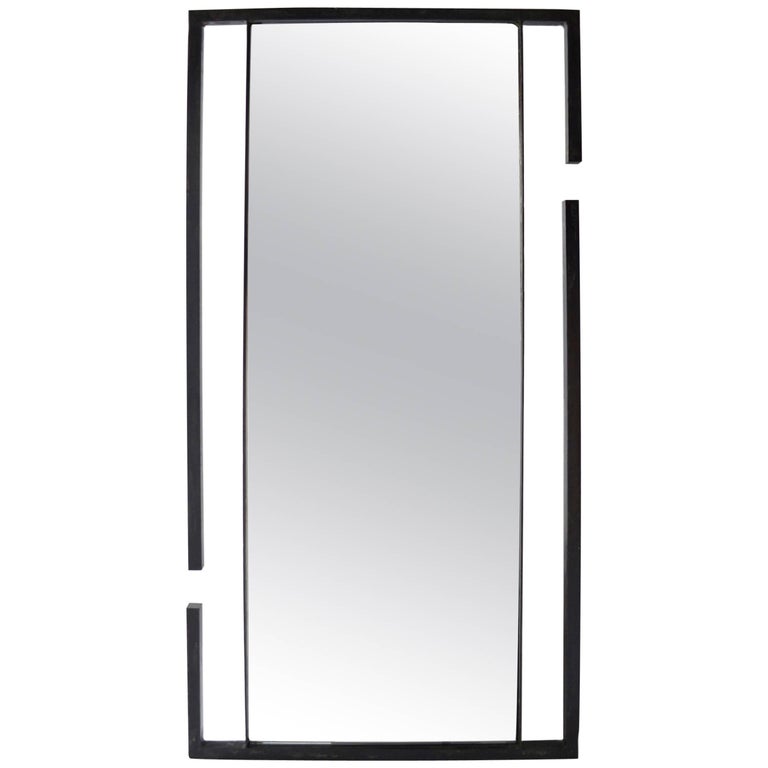 “We used this piece in our clients’ dining room to open up a space with no windows,” explains McPherson. “Its delicate frame looks like a line drawing from afar, but once you get closer, you feel the weight of its steel frame.” 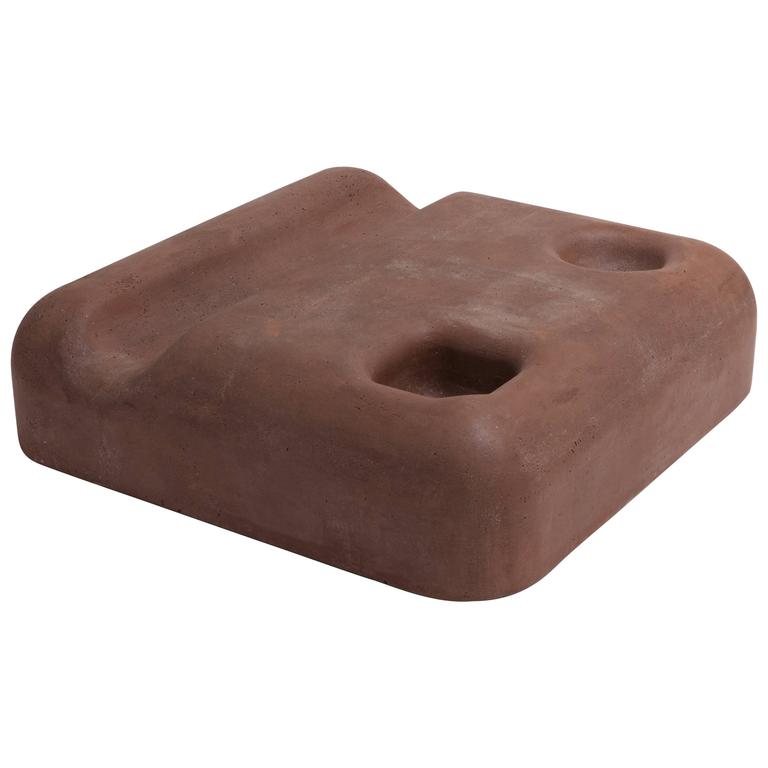 “Faye Toogood is an artist in our eyes,” says Suckle. “We love that you can see the hand — and the earth — in this piece. It’s beautiful, functional and a little bit weird.” 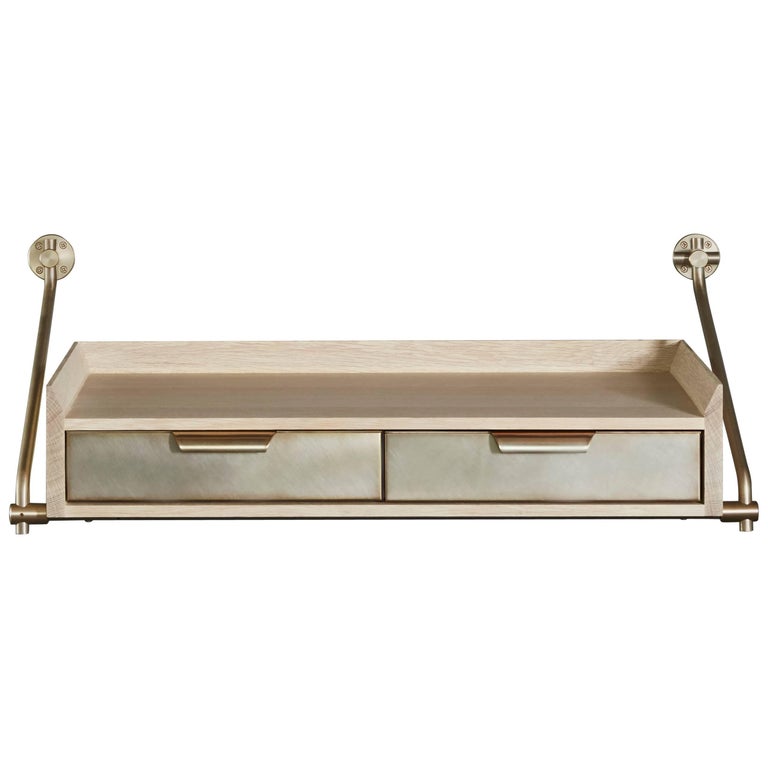 Notes McPherson: “A piece like this is great for an entryway. You can hide your mail in it, and we love the metal hardware. It’s a great way to add character to an otherwise quiet space.