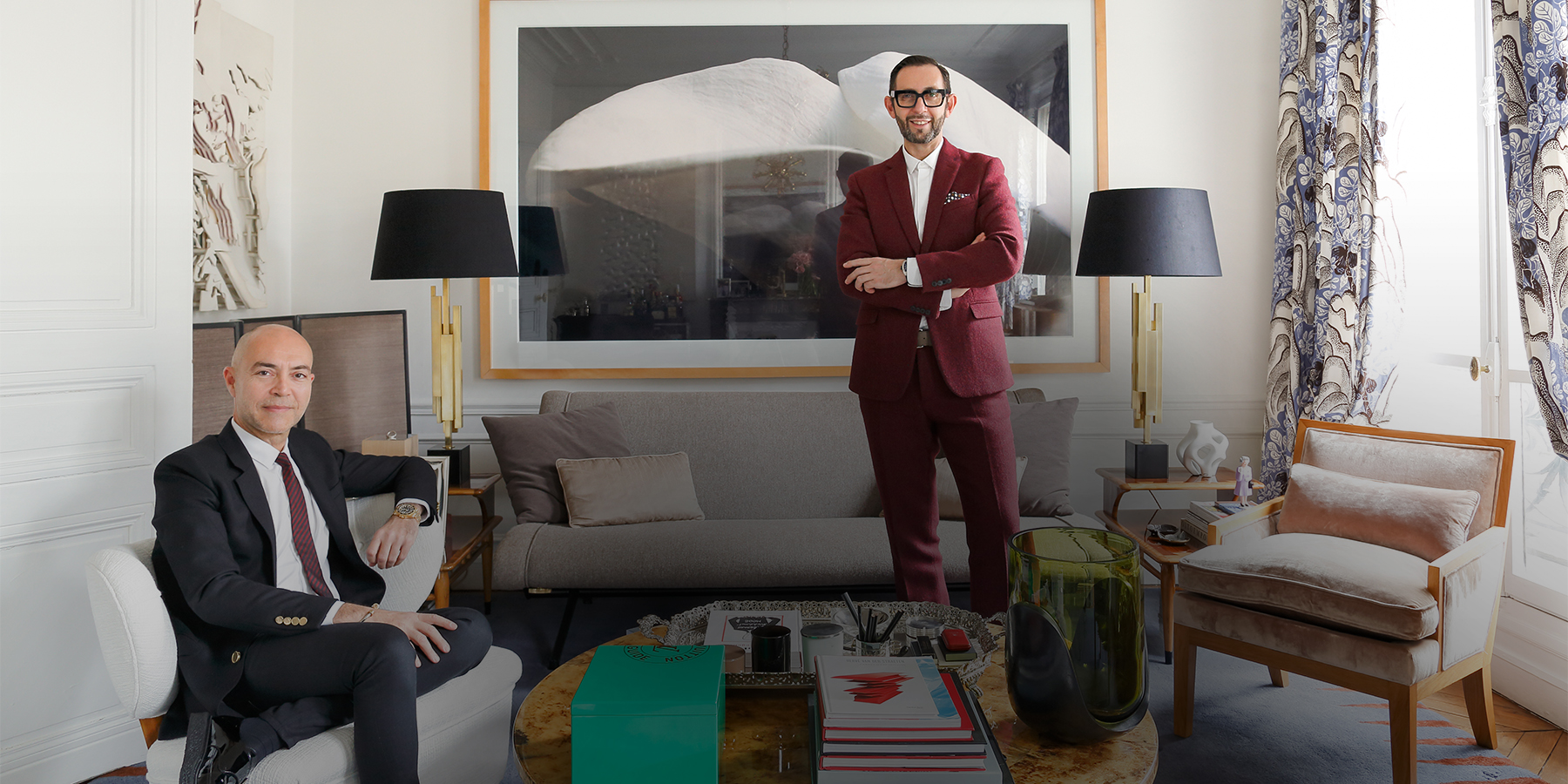 Vintage glamour, rigorous flamboyance and a serious sense of 21st-century fun define the work of Jacques Bec and Artur Miranda, the dynamic duo — partners both in work and in life — behind the Portuguese design enterprise Oitoemponto. 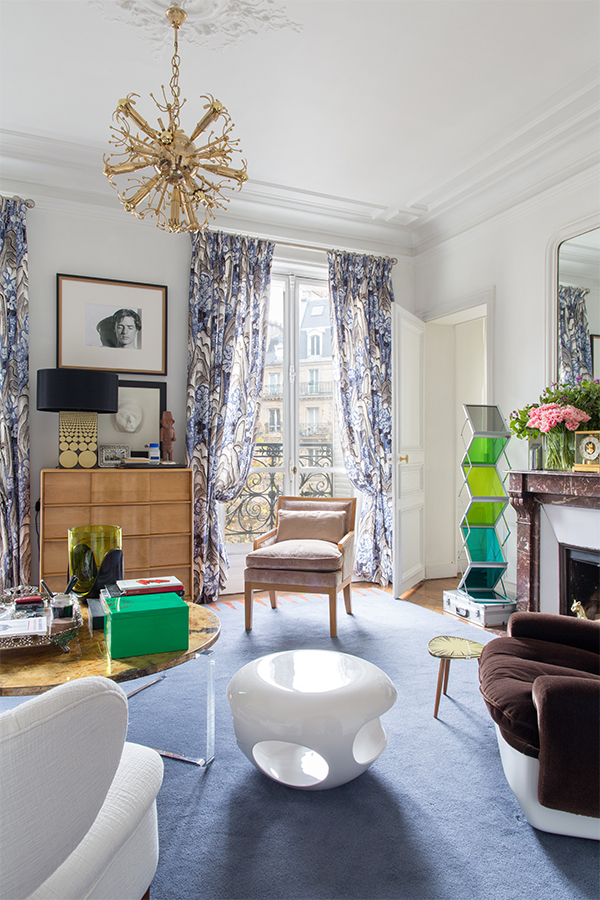 September 7, 2015Jacques Bec and Artur Miranda, partners in the design firm Oitoemponto, complemented the classic bones of their light-filled Paris apartment with such standout modern pieces as a white Otto Schultz settee, a Heywood-Wakefield chest of drawers and curtains in a Josef Frank pattern. Top: Bec (standing) and Miranda at home. Photos by Stephan Julliard/Tripod Agency

Jacques Bec and Artur Miranda, the pair behind the Portuguese design firm Oitoemponto, like to have fun. “My parents were really, really amusing,” recalls Miranda. “They were always having parties and everyone would constantly be laughing. I have that in the blood.”

The first time I met Bec and Miranda was at a dinner in Porto in the mid-’90s, and they were, indeed, having fun. When it came time for dessert, they put down their spoons, jumped up on the tables and started to dance. Their zest for life has not waned since. In person, they are witty, lighthearted and constantly in a good mood. They also have a passion for luxury goods, whether it be monogrammed Goyard suitcases or Bec’s 1971 Silver Shadow Rolls-Royce in turquoise and midnight blue. (The car is designated his and not theirs due to the fact that Bec is the only one of the pair with a license. “He’s my private chauffeur,” quips Miranda.)

Their fresh and frivolous approach to life does not, however, prevent them from producing serious work. In Portugal, they very much stand in a league of their own. Their commissions to date have included sumptuous villas on the Algarve, a 4,800-square-foot one-bedroom apartment in Lisbon and the Quinto do Pessegueiro winery in the Douro region, whose façade is covered with green glass in reference to its bottles. Bec and Miranda have also worked on boutiques in New York, Paris and London for the LVMH-owned menswear brand Berluti. “It’s very rare to find anyone like them,” says the label’s artistic director Alessandro Sartori. “They are able to translate a message like no one else.” Their most impressive project, however, is a residential complex some 30 miles outside the Angolan capital, Luanda, which includes a 27,000-square-foot main house, a 16,000-square-foot discotheque, a private casino decorated with Hermès wallpaper and some 20 guest rooms, not to mention 30 Porsche bikes and space for dinners of up to 300 guests. 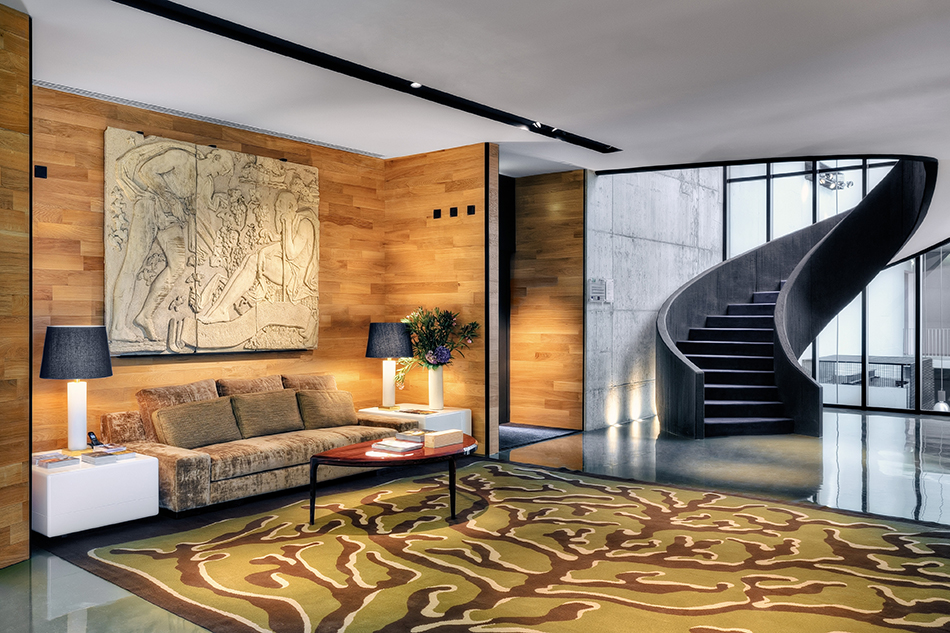 In a reception area of the Quinto do Pessegueiro winery, in the Douro Valley, Bec and Miranda hung a French bas-relief from the 1940s — depicting Noah and his son harvesting after the flood — over a couch, rug and lamps of their own design. They clad the walls with wood used for wine barrels. All photos © Francisco Almeida Dias 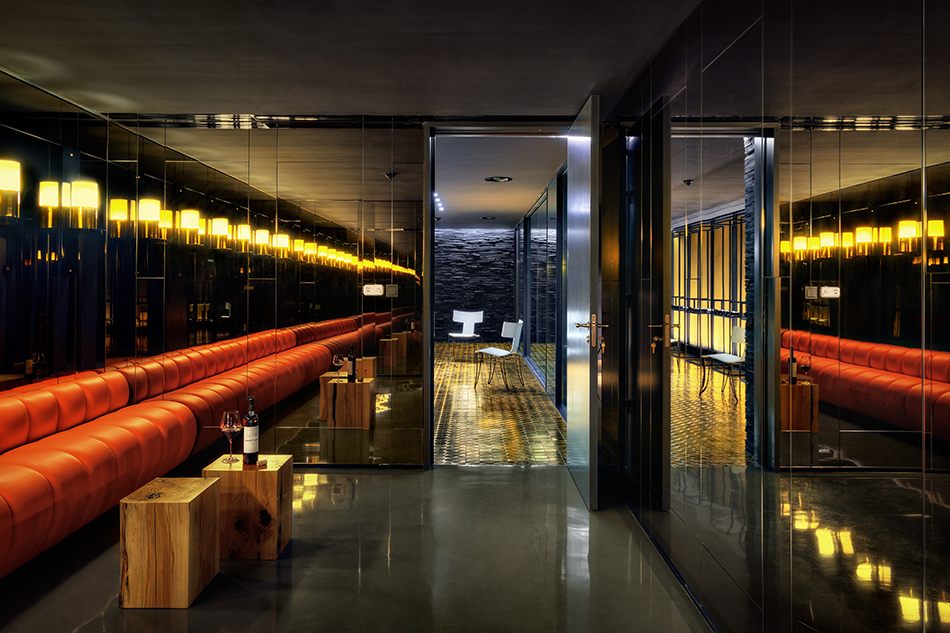 Elsewhere at Quinto do Pessegueiro, the designers installed a brushed-brass floor meant to recall the Duoro River. The chairs in the background are Donghia, while Bec and Miranda created the couch and tables. 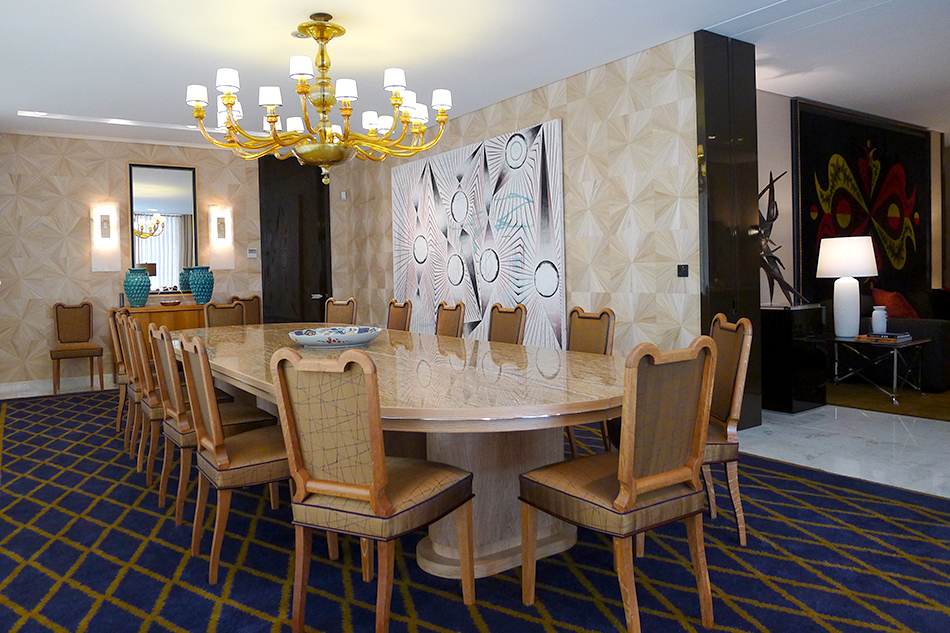 A dining room in a sprawling residential complex outside of the Angolan capital of Luanda proves surprisingly intimate. A fluid Murano glass chandelier from the 1940s complements the more rigid geometries of Maya Romanoff’s wood-marquetry walls, hung with a piece by Tillman Kaiser. 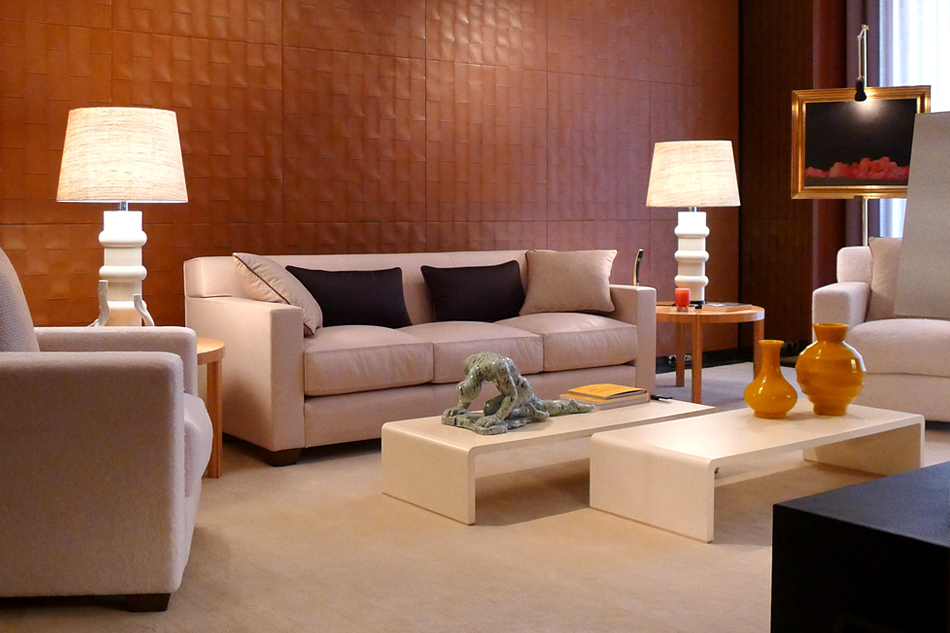 Well-adorned surfaces appear again and again at the Luando home; here, the wall is covered with Hermès leather by Jean-Michel Frank. The seating and lamps are by Oitoemponto. 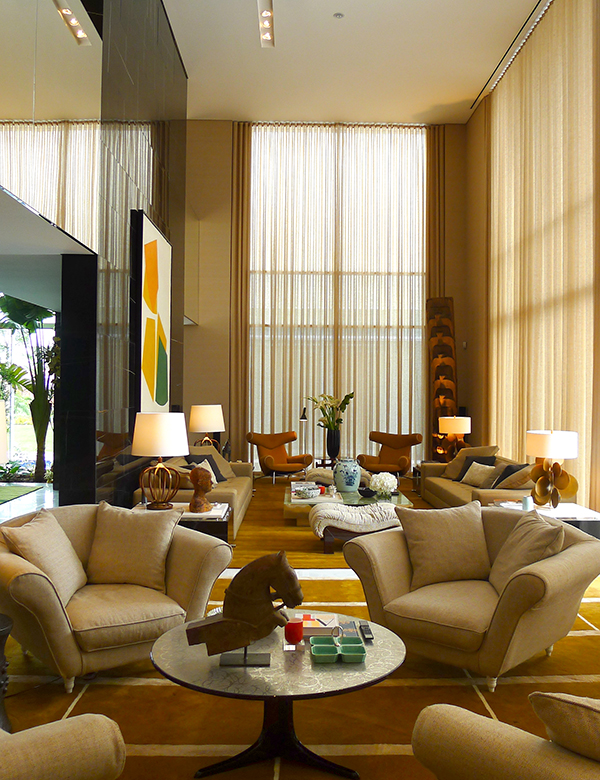 The couple, who are married, first met in the Parisian nightclub Le Queen in 1993, and were immediately struck by certain sartorial similarities. “Everyone else was practically naked,” recalls Miranda. “We were the only two wearing jackets.” Bec, 53, was born in Paris. His mother was a head seamstress with both Schiaparelli and Balmain. His grandfather, an engineer, invented a revolutionary method for printing indexes and counted several luxury goods houses among his clients. “As a kid, I was always surrounded by Vuitton and Hermès boxes,” recalls Bec. He initially studied interior design at the Ecole Supérieure d’Arts Graphiques Penninghen, in Paris, where his teachers included the acclaimed French postwar designer Alain Richard, but he began his career working in the Paris creative studio of Japanese watchmaker Seiko. “It was interesting to work on such small objects,” he says, “because you’re obliged to be very concise.”

The 54-year-old Miranda also came to interiors via a rather roundabout route. While his mother was extremely liberal (he claims she was the first woman in Portugal to wear trousers), his father insisted on him pursuing a “proper” career. “I was born drawing houses and building them with Legos,” says the Porto native. “I always wanted to be an architect, but my dad was against it.”

Instead, he studied law for three years before being allowed to enroll as a fashion student at Porto’s Árvore art school. Soon after graduation, he moved to Stockholm and lived there for seven years, three of which he spent as creative director for the Swedish fashion chain Gul & Blå. On his return to Porto, he segued into designing showrooms and boutiques for the agent of fashion brands like Dolce & Gabbana, Moschino and Armani, but got his big break when asked to revamp a nightclub called Cais 447. “It was a hangar I painted entirely in Yves Klein blue,” he recounts. “I created the most glamorous place possible.” A Chesterfield sofa covered in gold damask stood on a podium in the middle of the dance floor, while the doorman sat on a swing. 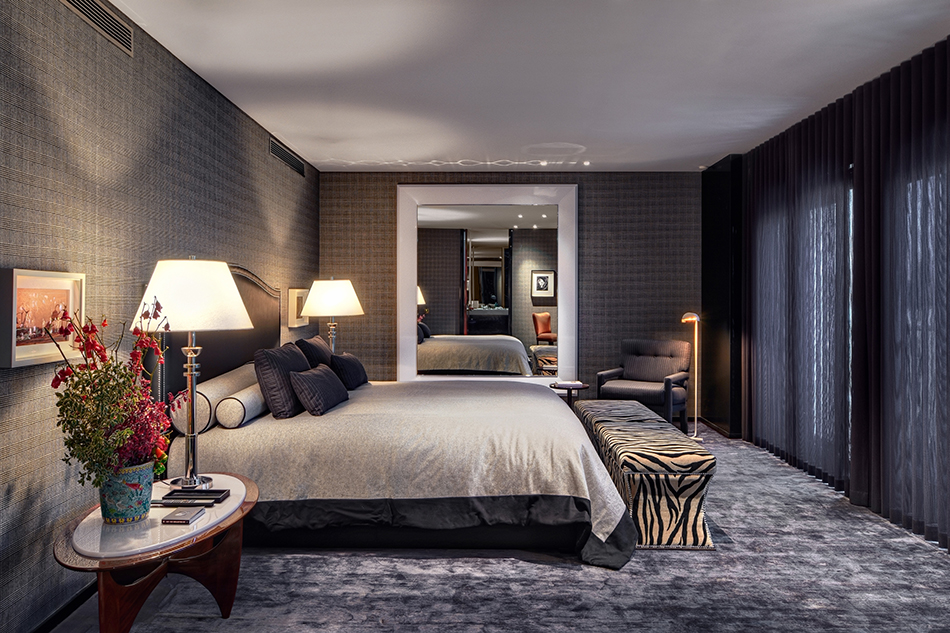 A masculine, moody bedroom in the Lisbon apartment features a bed, lamps and tiger-print bench by Ralph Lauren and a night table by G-Plan. All photos © Francisco Almeida Dias 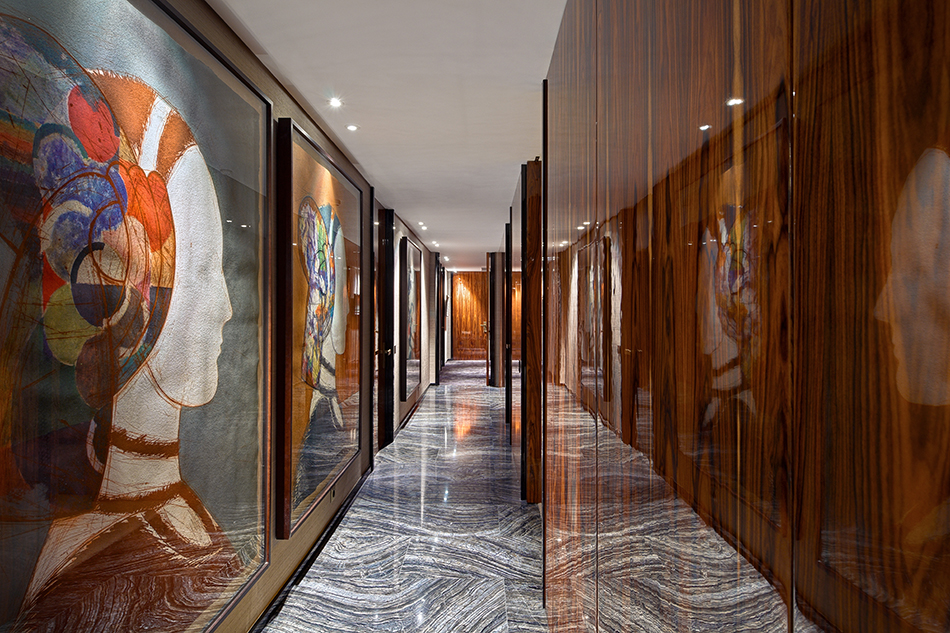 Clad in polished rosewood and Kenya Black marble, and hung with works by Manolo Valdés, a hallway in the Lisbon apartment becomes much more than a way to get from one room to the next. 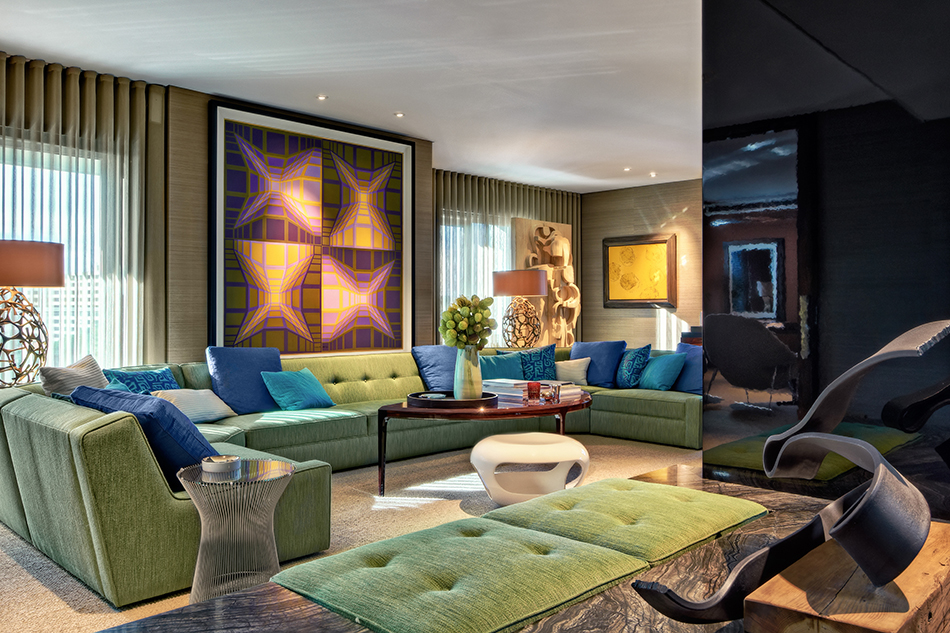 Van der Straeten table lamps reappear in another living area of the Lisbon apartment, joined by a Victor Vasarely painting and a Johannes Andersen table. 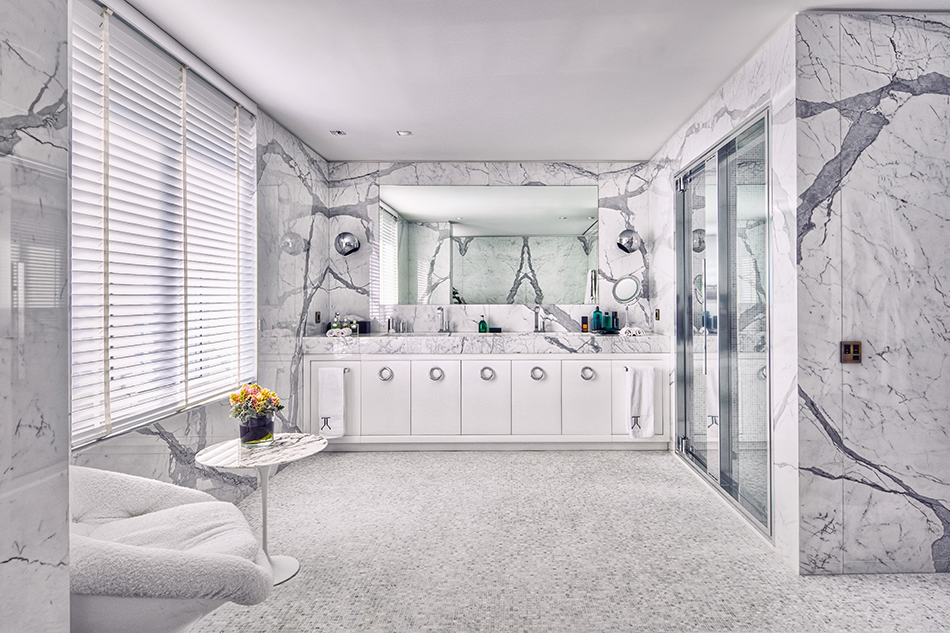 A nearly all-white bathroom in the Lisbon apartment is a vision of richly grained Calacatta marble. 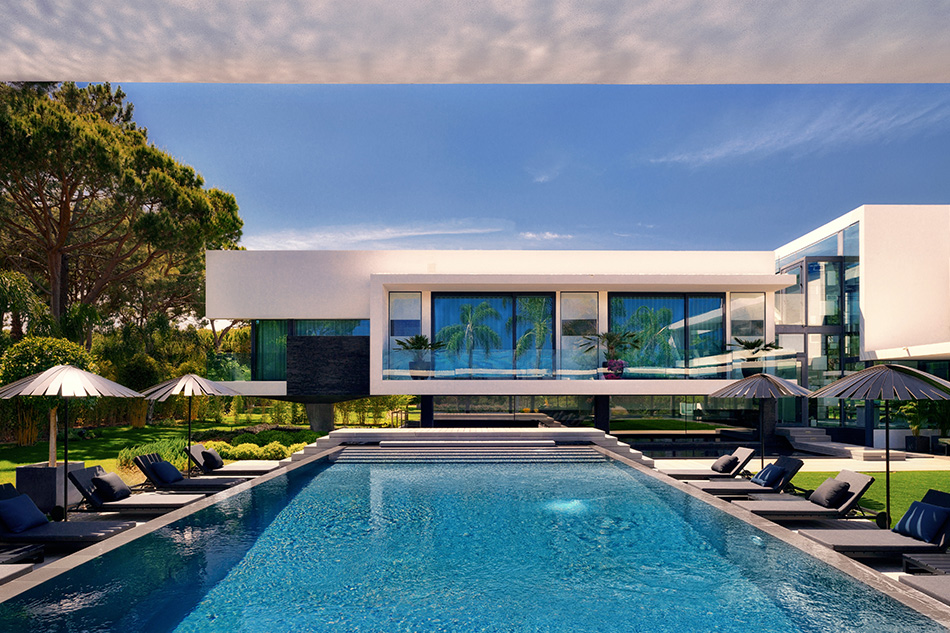 Having added architecture to their design wheelhouse since 2008, Bec and Miranda handled both the exterior and the interior décor of a sumptuous villa they created in Portugal’s Algarve, finishing the pool area with outdoor furnishings by Kettal. 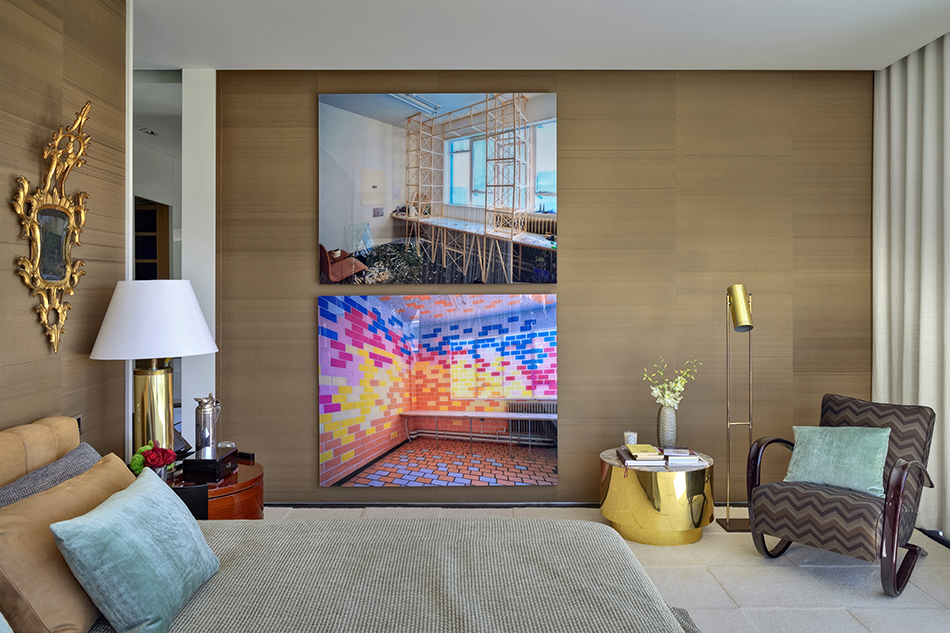 A bedroom in the Algarve villa features photographs by Belén Uriel, a petite centuries-old Italian mirror over the bed and a highly polished, marble-topped table by Oitoemponto. 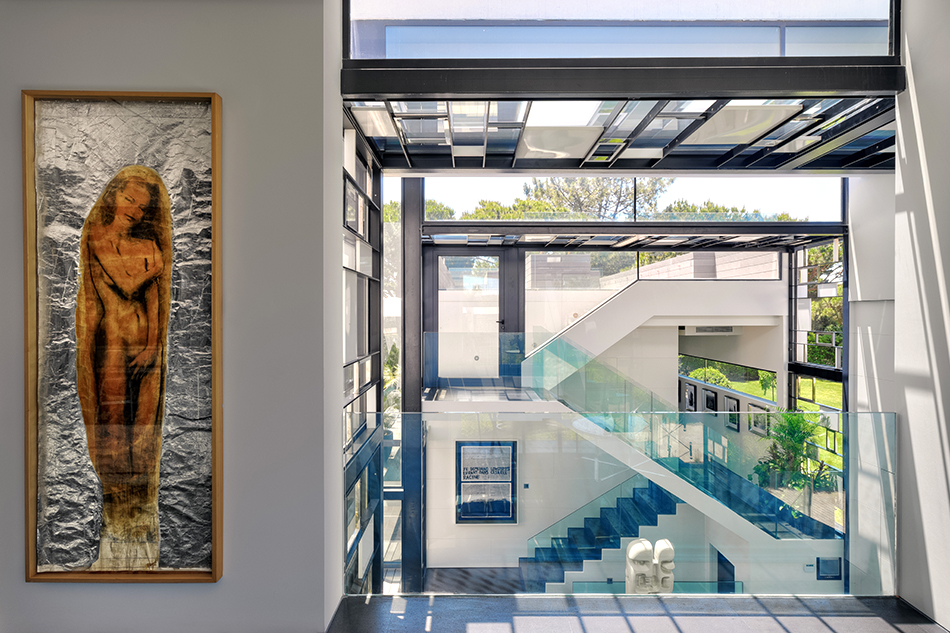 “The circulation and internal working of a house is what interest us the most,” says Bec, something that’s abundantly clear in this glass-enclosed atrium in the Algarve villa, which allows for easy — and dramatic — movement up and down. The artwork is by Augusto Canedo. 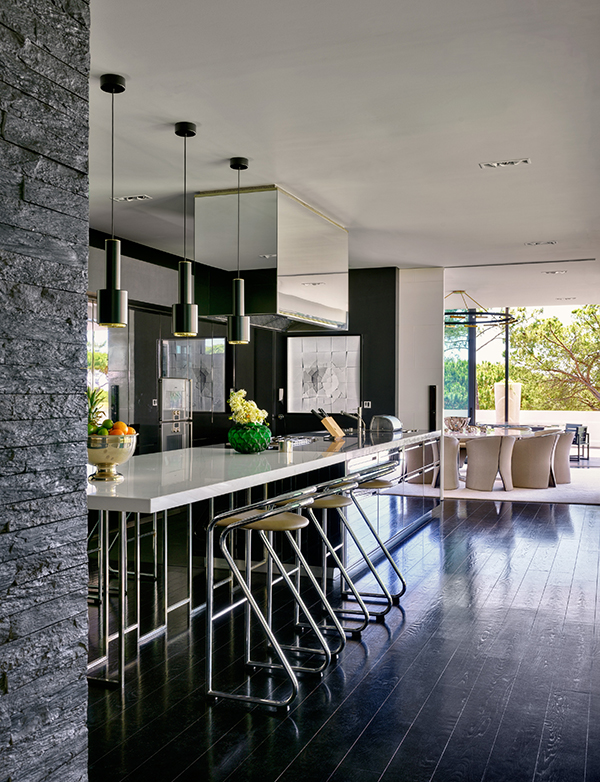 In the Algarve villa’s kitchen, Louis Poulsen pendant lamps hang over a countertop abutted by French barstools from the 1950s. Beyond, chairs by Noé Duchaufour-Lawrance surround a round table under a Sarfatti chandelier. Photo © Francisco Almeida Dias

It was in 1992 that he created Oitoemponto, which literally means, “Eight on the dot.” “I was born on February eighth and the number’s always been lucky for me,” he explains. Eight months after their initial meeting, Bec moved to Porto to join him, and, for a number of years, they would host dinners at 8 p.m. on the 8th of every month for eight people.

Their style has always been marked by a high dose of glamour. According to their close friend, the furniture and jewelry designer Hervé Van der Straeten, “The universes they create evoke the timeless decors of the James Bond films and the pared-down, joyful modernity of the sixties.” Among Miranda’s aesthetic influences are the films of George Cukor and Alfred Hitchcock, the sets for Stanley Kubrick’s 2001: A Space Odyssey and Barbarella. “She’s my favorite heroine,” he says of Jane Fonda’s 1968 science-fiction icon. “She arrives in the middle of nowhere, looking marvelous, even when there’s no one to admire her.” He’s also a huge fan of American design from the 1940s and ’50s by the likes of Paul Laszlo and T.H.Robsjohn-Gibbings: “Their furniture is both comfortable and photogenic.”

Bec’s tastes are a little more traditional — think classical French furniture and Kubrick again, but this time his period drama, Barry Lyndon, set in the 18th century. They do, however, share a love of 20th-century Scandinavian design and the work of American architect Paul Rudolph. “His perception of space was revolutionary,” says Bec. Their own schemes feature an abundance of lacquer, shiny metals, richly veined stones and marble, generously proportioned seating and more than a touch of Billy Haines–style Hollywood chic. 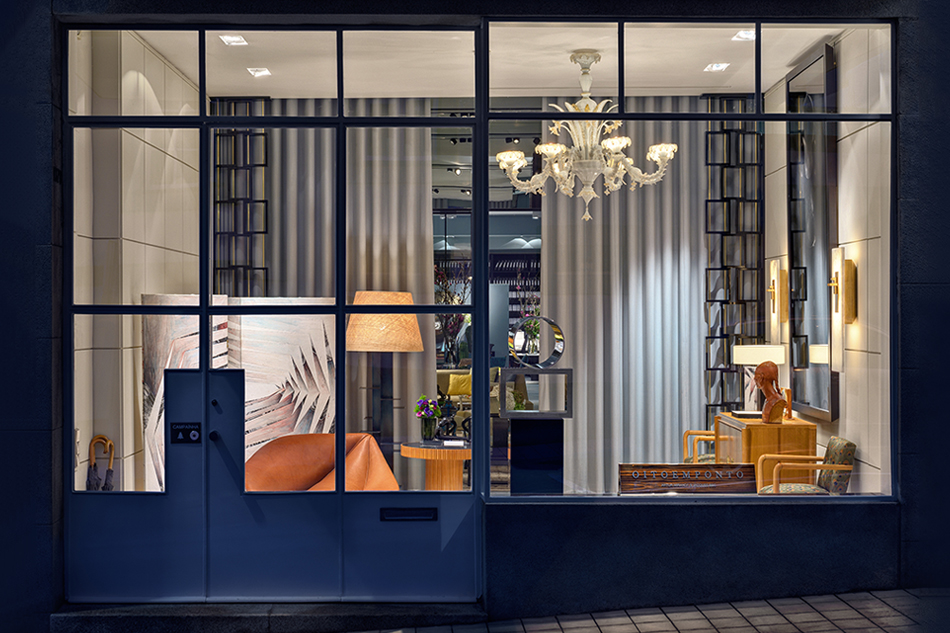 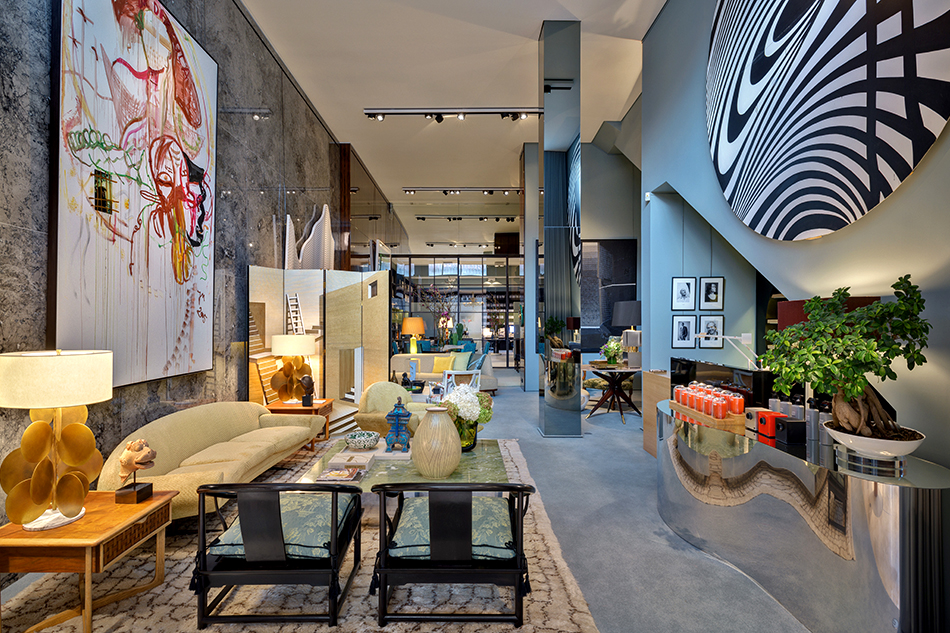 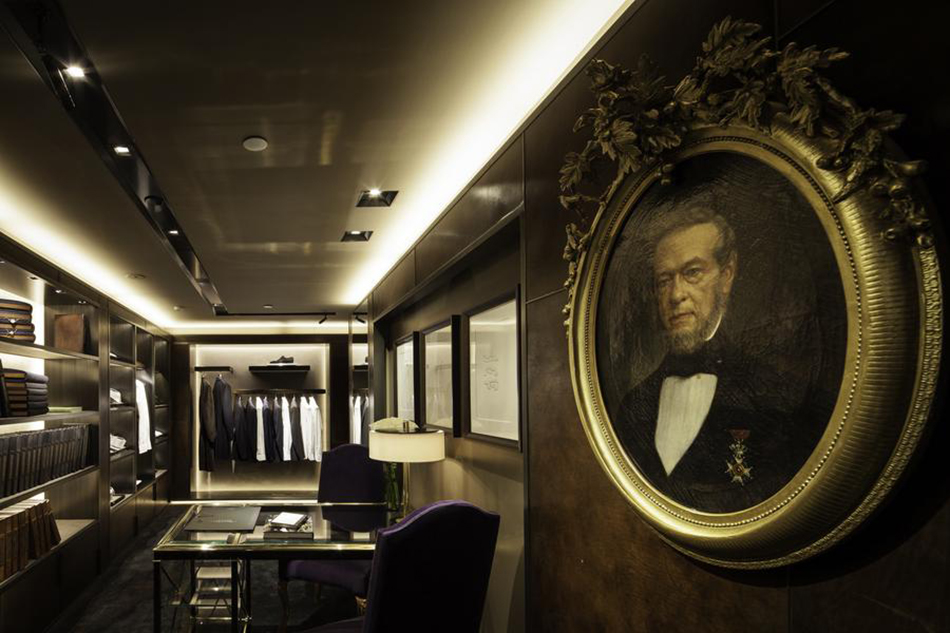 Oitoemponto’s work at the Berluti boutique in New York — one of three stores the designers have created for the Italian menswear brand — includes a table attributed to Maison Jansen and an imperious gilt-framed portrait. 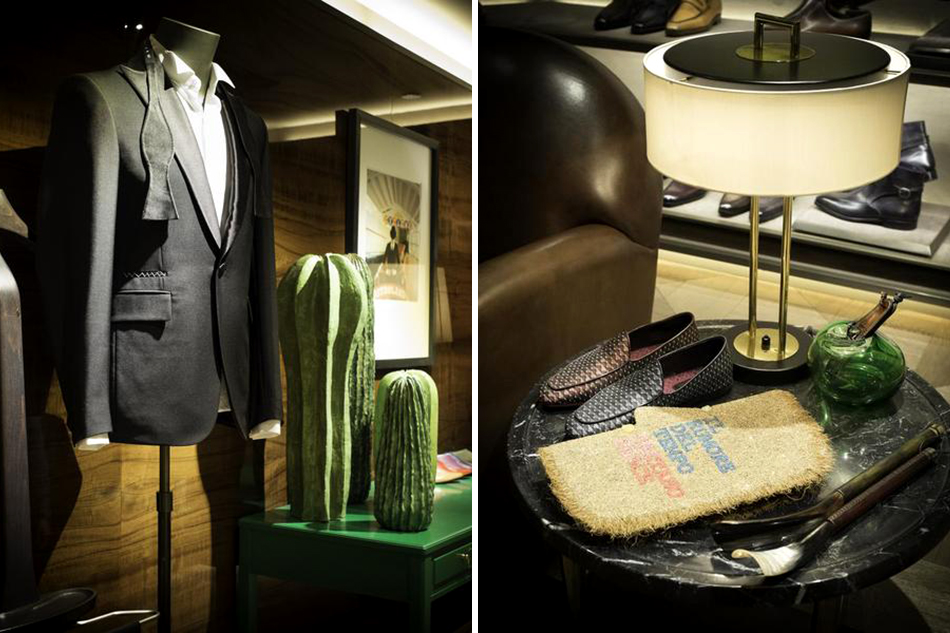 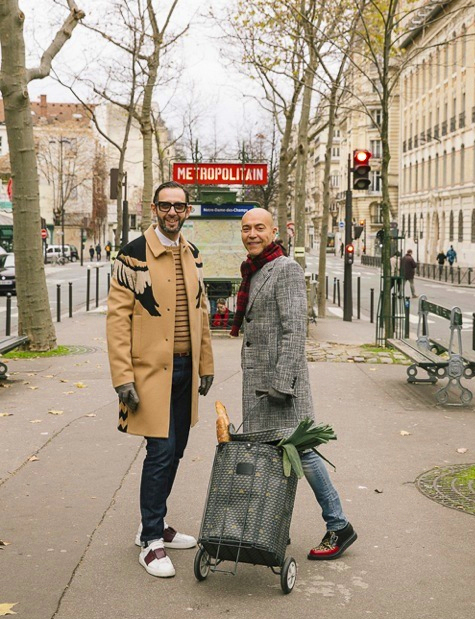 Artur Miranda and Jacques Bec met in 1993 in the Parisian nightclub Le Queen and soon became business partners in the design firm Miranda had formed just a year before. Photo by Stephan Julliard/Tripod Agency

In 2008, they decided to turn their hand to architecture, too, and now employ four qualified architects in their office. “It was a quite logical step,” affirms Miranda. “The circulation and internal working of a house is what interest us the most,” adds Bec. “It’s the core of our work. Often, architects begin with the exterior, whereas we do the opposite. We start with the interiors and the form of the building is derived from them.” Last year also saw the launch of their debut furniture collection, NOSSABOSSANOVA, inspired by mid-century Brazilian architecture. Highlights include the Copacabana mirror whose surface is decorated with irregular forms in rosewood, gold leaf and metal, and the Burle credenza, whose façade features tightly rhythmic geometries.

Since 2002, they have also sold vintage pieces through their showroom in a former shirt factory in Porto and are planning to open a new boutique in the Four Seasons Hotel Ritz in Lisbon this fall. They were also among the first Portuguese dealers to sign up to 1stdibs when the site launched in Portugal and Spain in spring 2014. “We buy things all the time,” admits Miranda. “You can’t imagine just how much we have in stock.” Miranda is particularly passionate about table lamps, of which he estimates they have some 500. His favorites are a Lucite pair that came out of the Bel Air Hotel and which he claims to have once spotted in a James Bond film. “I’ve been crazy about lamps since I was six,” he says. “For me, there’s something magical about them, and I’ve never lost that fascination.”

He concludes with a phrase that could also serve to describe the careers of this dynamic duo. “They’re really just so glamorous.”

Jacques Bec and Artur Miranda share their thoughts on a few choice pieces from their Oitoemponto 1stdibs storefront. 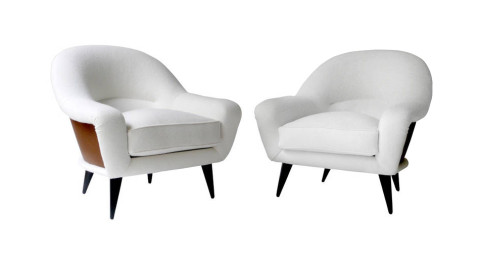 We like their gentle, undulating forms and their two materials — leather and boiled wood — which makes these two armchairs as beautiful from the front as from behind. 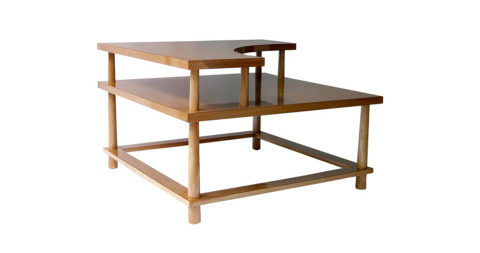 The two-tier structure of this table allows you to organize and structure beautiful schemes. 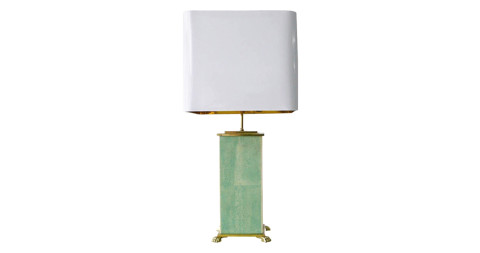 We immediately fell in love with the extremely delicate faux-shagreen finish and the gentle green color. 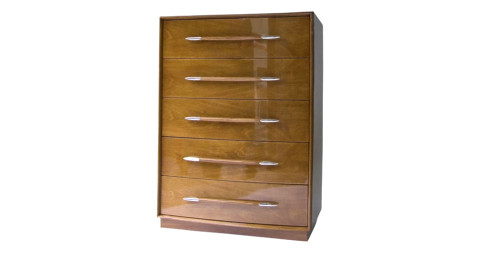 We love this chest of drawers because of its unusual proportions, the way it’s arranged inside and its silvered-metal details. 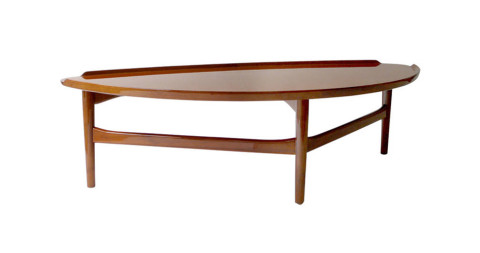 The generous boomerang shape is perfect for creating a smooth, easy flow in front of any sofa. 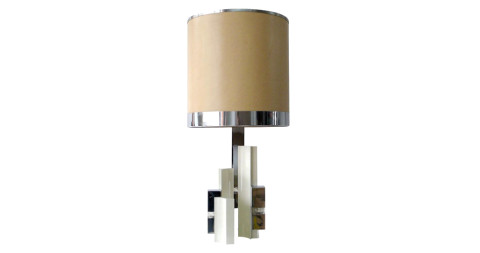 Its small-scale architecture, and the lights integrated into its base mean that it remains resolutely modern.