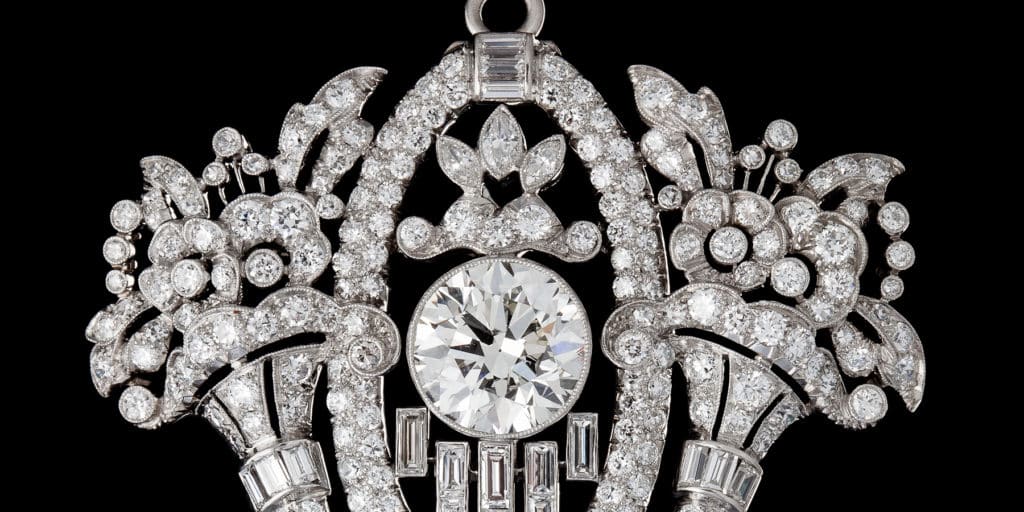 The 20th-century jewelry designer — which quietly created pieces for such companies as Cartier and Tiffany and for bold-faced names like Elizabeth Taylor and Marjorie Merriweather Post — gets a much-deserved moment in the sun. 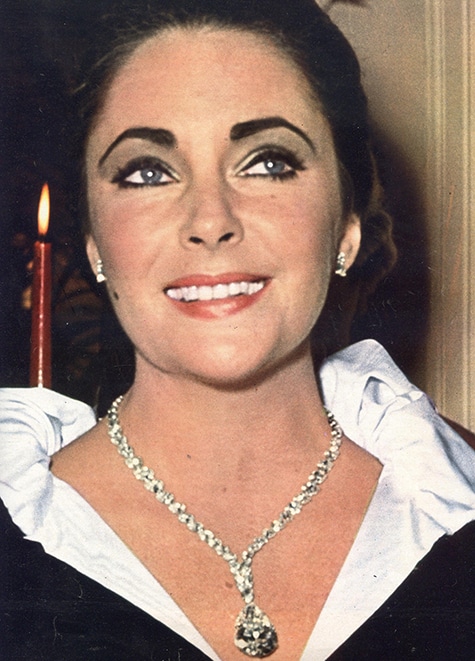 June 5, 2017A new book shines the spotlight on the discreet New York jeweler Oscar Heyman & Brothers, which, since its founding in the early 20th century, has produced pieces for some of the most renowned houses. Among these is the custom Cartier necklace Elizabeth Taylor commissioned for the 69.42-carat pear-shaped diamond that Richard Burton bought for her. Top: An Edwardian-style Oscar Heyman platinum and diamond ornament. All photos © Oscar Heyman

At long last, the habitually discreet firm Oscar Heyman & Brothers has come out from behind the curtain to take a bow. The new book Oscar Heyman: The Jewelers’ Jeweler (MFA Publications) celebrates the illustrious company, known primarily by connoisseurs and insiders as a maker of jewelry for some of the world’s most storied houses. For Van Cleef & Arpels, the firm made the Mystery Setting pieces, the name referring to the fact that no prongs show around the stone. For Tiffany & Co., Oscar Heyman created pansy brooches and guard rings; for Cartier, the diamond necklace Elizabeth Taylor commissioned to hold the 69.42-carat pear-shaped pendant Richard Burton had given her. Less well known, but no less thoroughly documented in this comprehensive tome, is Oscar Heyman’s role in designing and manufacturing pieces sold without attribution by such retailers as Shreve, Crump & Low, in Boston; J. E. Caldwell, in Philadelphia; Julius Cohen, in New York; and Laykin et Cie, in Los Angeles.

Oscar Heyman & Bros. was launched in 1912, in New York, founded by brothers Oscar and Nathan, who had trained at a workshop in Russia whose clients included Fabergé; they were later joined in the business by their other siblings. Not long after they set up shop, they became the city’s go-to jeweler for any house or retailer that wanted superb pieces made. The firm was known for its high-quality gemstones, classic designs and fine craftsmanship, a trifecta of excellence characteristic of its creations to this day.

In this much-needed publication, authors Yvonne J. Markowitz and Elizabeth Hamilton recount the history of the company, which remains a family business. (The founding brothers died in the 1970s.) But the volume’s greatest glory is its 120 color images. These include archival drawings that provide a revealing look at the process, from design to execution, and vibrant photos of brooches, necklaces, rings and bracelets made over the years in New York, where production continues to take place.

The book makes clear that Oscar Heyman jewels offer an education in the prevailing styles of the 20th century. Geometry, precision and strong, contrasting color schemes are hallmarks of the firm’s Art Deco pieces. Polished yellow gold and an emphasis on scrolls and volutes set with such stones as aquamarines and citrines are classic attributes of moderne or Machine Age styles. Patriotic brooches featuring the American flag are emblematic of the two world wars. 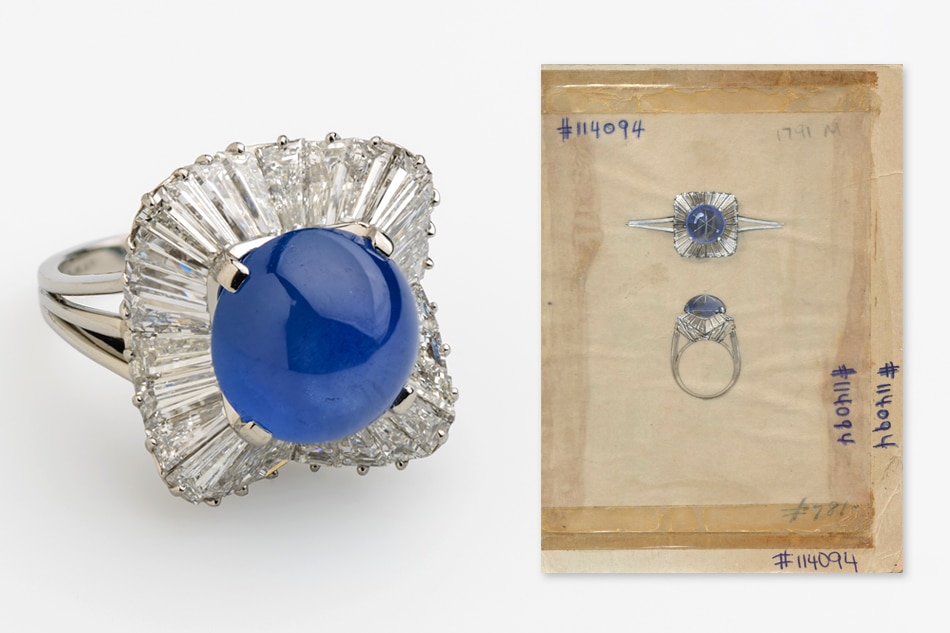 The ballerina ring, created in the 1950s, “proved to be one of the firm’s most popular adornments,” the authors write. The ruffles of a dancer’s skirt inspired its design and, thus, its name. It remains in production today. 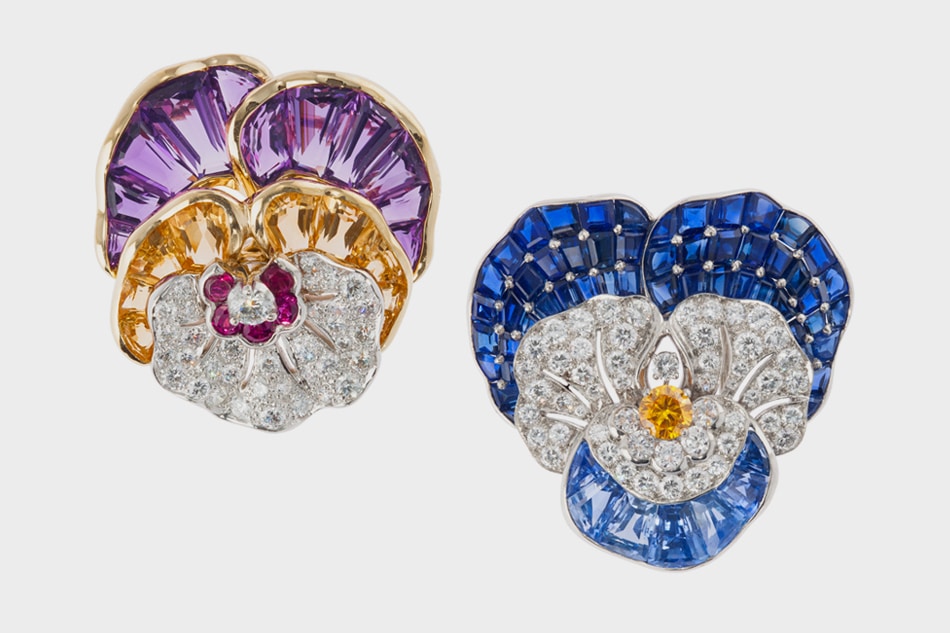 Oscar Heyman set its pansy brooches with a variety of stones, including citrines, peridots, amethysts, diamonds, emeralds, sapphires and rubies. 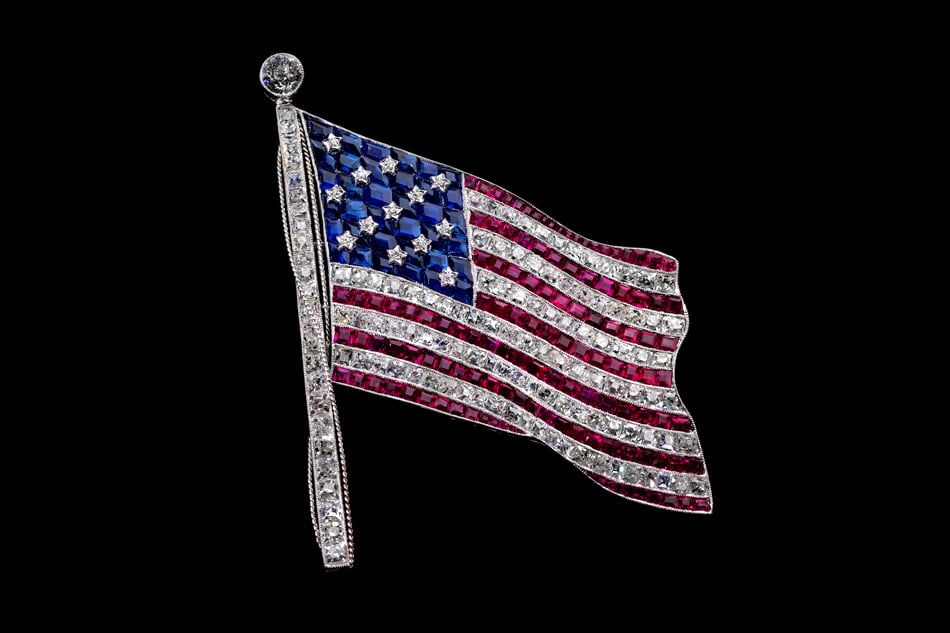 The firm made this patriotic brooch during World War I for an early client, Black, Starr & Frost. 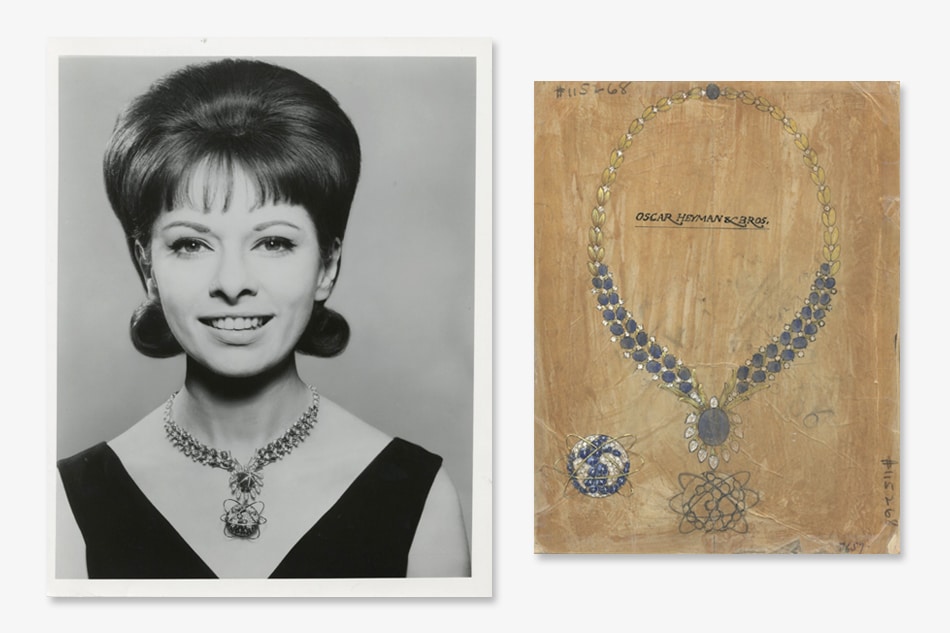 Oscar Heyman based its Linde Star necklace on the monumental Unisphere displayed at the 1964 World’s Fair, in Queens, New York. Composed of a 23-carat synthetic sapphire pendant surrounded by gold wire and embellished with diamonds and additional synthetic sapphires, it’s worn at left by Ann McKeon, the fair’s Summer Festival Queen. 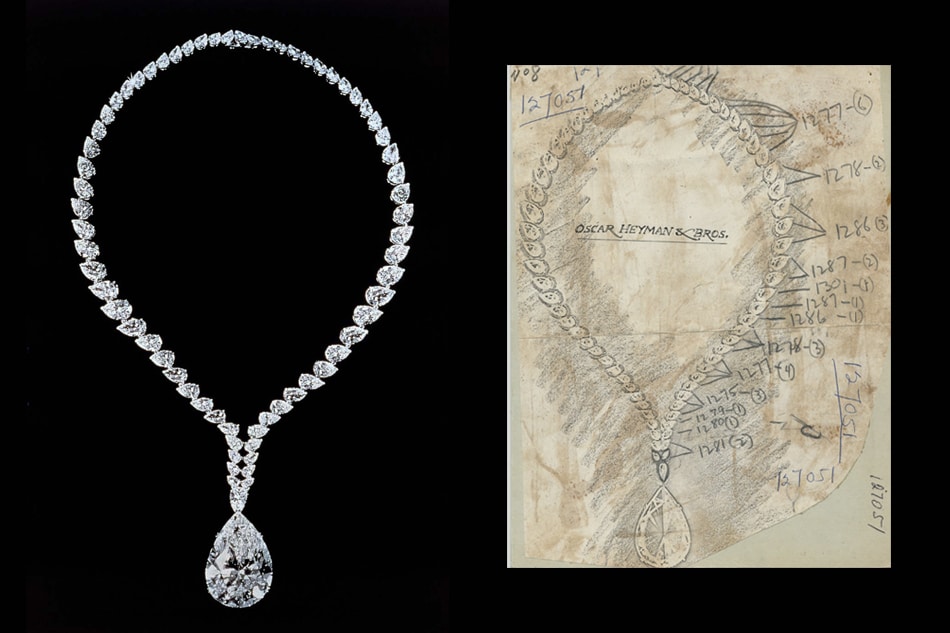 A drawing shows one of several variations Oscar Heyman considered for the Cartier necklace Taylor commissioned for the impressive pear-shaped diamond pendant.

Pansy brooches with stems, like this one, are an unusual variant on Oscar Heyman’s floral themes, according to the book’s authors.

The firm’s flower brooches, introduced in the 1930s, remain an Oscar Heyman staple, the roses, lilies, gardenias and pansies so fresh and vibrant their petals seem dappled with dew. The ballerina rings, featuring undulating skirts of diamonds, were introduced in the 1950s and are still a signature design. (Over the years, they have been much imitated by lesser jewelers, often poorly.) Superb, skillfully cut stones and exquisite settings distinguish the firm’s serious diamond pieces from every decade.

In the early 1960s, when the U.S. space program was hitting its stride, Oscar Heyman created a piece of jewelry that gained worldwide fame. The Linde Star necklace, modeled on the 1964 World’s Fair’s famous Unisphere, featured a 23-carat synthetic sapphire pendant that stood in for the original’s massive central globe. This was encircled with gold wire and studded with nearly 200 diamonds and synthetic sapphires. The piece, named for the major dealer of synthetic sapphires with which Oscar Heyman partnered to make it, became the ’64 fair’s official commemorative necklace.

The prominence of the people — such as Taylor — who have owned and worn Oscar Heyman pieces factors heavily into the company’s continued mystique. The carved and engraved Indian emerald and diamond brooch featured on the book’s jacket, for example, originally belonged to heiress Marjorie Merriweather Post, who purchased it from Marcus & Co. around 1929. Today, it’s one of the glories in the splendid jewelry collection of the Museum of Fine Arts, Boston, whose publishing arm produced the monograph. Hollywood stars, First Ladies, European royals and world leaders have all loved and possessed the firm’s jewelry, as have members of the Social Register, such as Mrs. Laurence Rockefeller, John Hay Whitney and Betsy Cushing Whitney.

Oscar Heyman has long been known as “the jewelers’ jeweler.” Those three words still convey the assured quality and quiet dignity of the company’s creations. That’s a defining achievement.

Browse a curated selection of the firm’s glittering jewels. 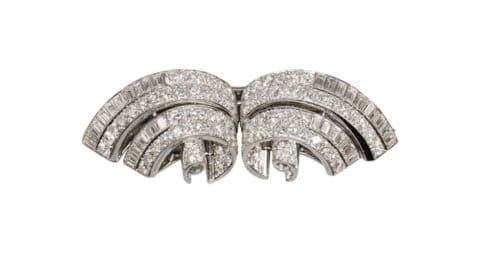 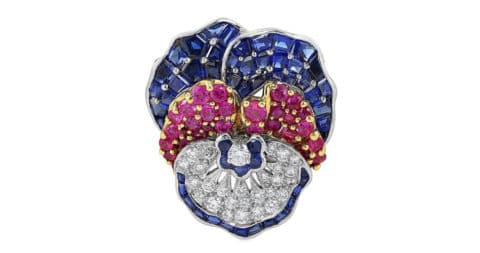 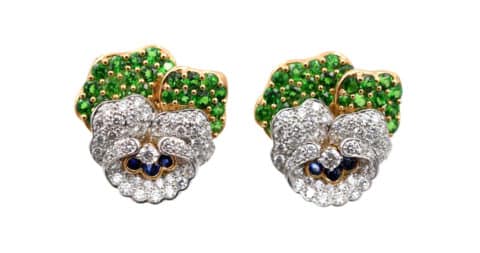 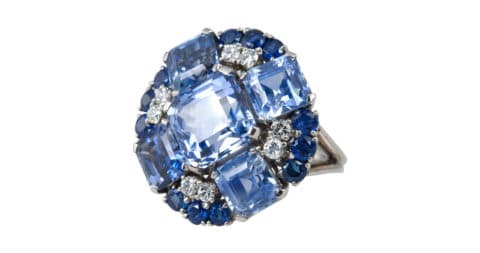 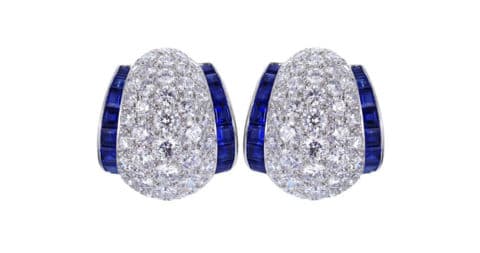 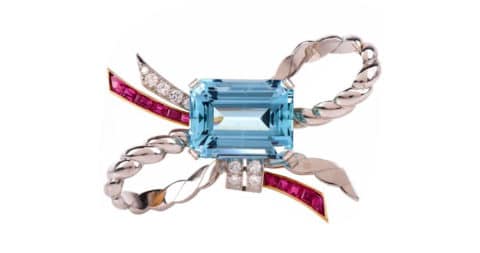 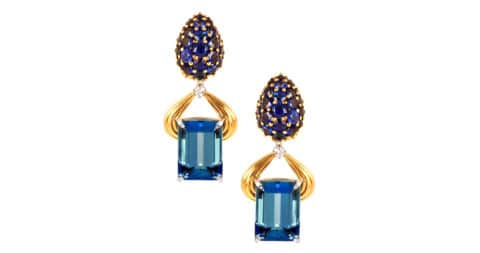