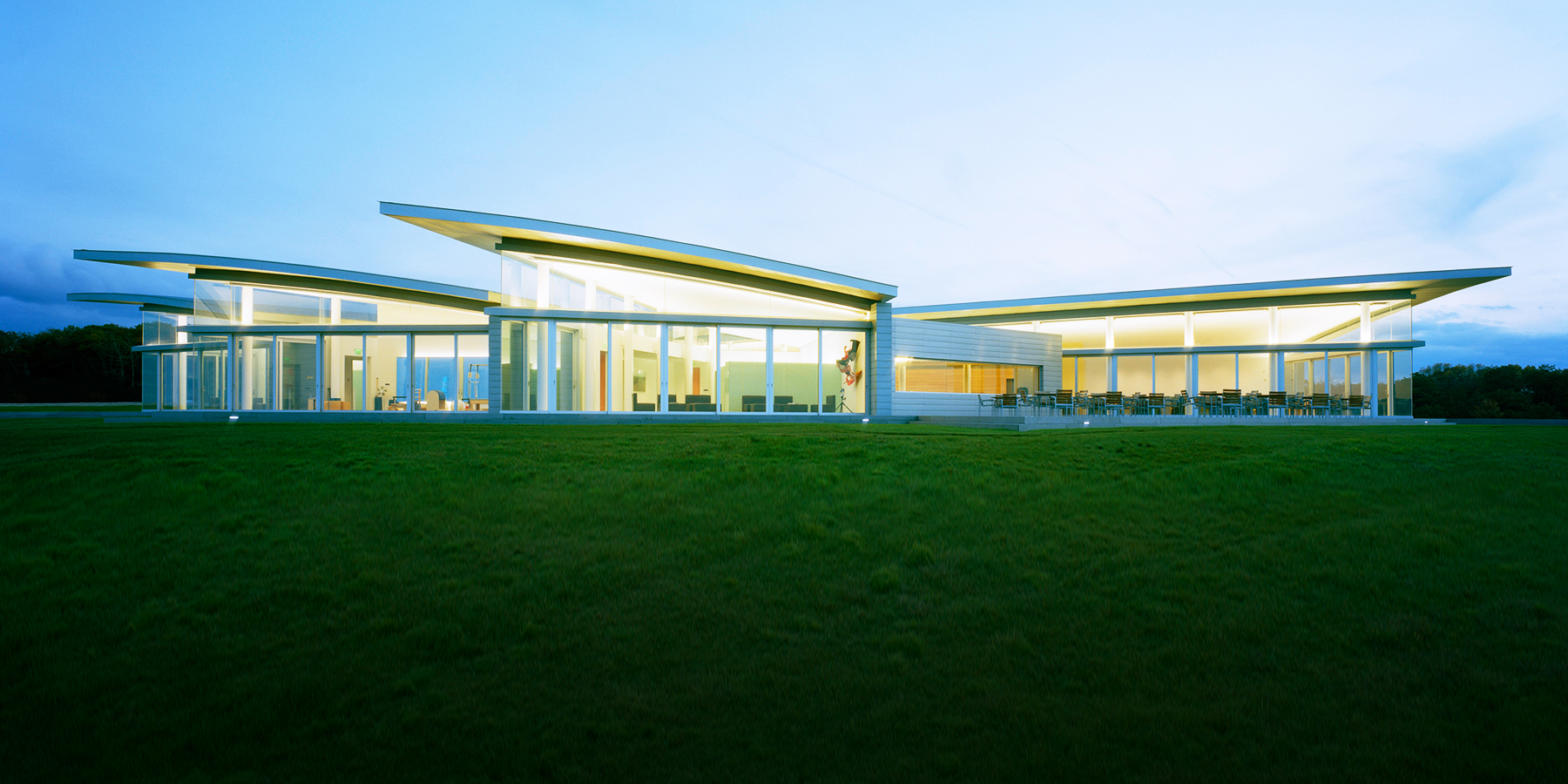 A spiritual descendant of Philip Johnson, Marcel Breuer and their New Caanan, Connecticut, cohorts, architect Roger Ferris creates buildings — including homes for many high-flying clients — that are as elegant as they are rigorous, as innovative as they are functional. 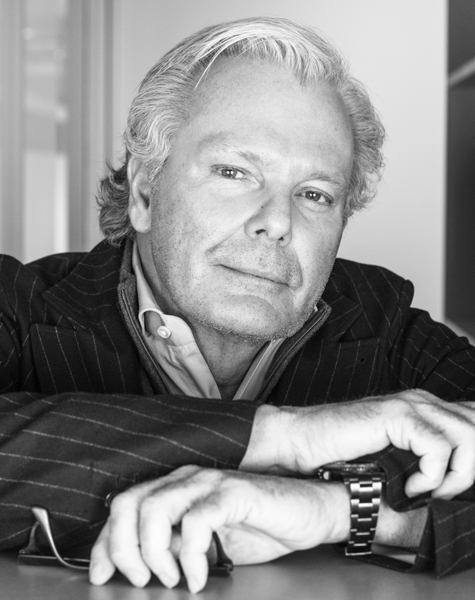 January 12, 2015The architect Roger Ferris maintains offices in Connecticut, the Hamptons and Manhattan (portrait by Nadia Witte). Top: Ferris designed the Bridge golf club, in Bridgehampton, New York, with sustainability in mind. All photos by Paúl Rivera except where noted

Seeing almost any building designed by Roger Ferris brings to mind the word “parti,” architects’ lingo for how the sections of a building fit together. A successful modernist structure — of which Ferris has designed many — will display its parti proudly. “I strive to make our design intentions legible,” says the founder of Roger Ferris + Partners.

Take the Topping Rose House, a luxe inn in Bridgehampton, on Long Island’s East End. Here, Ferris designed a long, narrow building with plate glass windows that reveal its semi-public nature (it serves as yoga studio, reception hall and conference center). A separate, perpendicular building contains the guest rooms, hidden behind wooden slats and alternating with beautifully detailed outdoor stairways. Even from a distance, it’s clear what each part of the building does, and how they’re joined together.

Or take the clubhouse he designed for the Bridge, a super-high-end golf club (the initiation fee is rumored to be around $1 million), a few miles away. That building has four petal-like forms that reach into the landscape. One contains the men’s locker room, one the women’s, one a fitness area and one a restaurant; there’s no overlapping, or confusion about what’s where.

That kind of clarity — with the functions of a building expressed in its outward form — reflects Ferris’s childhood in New Canaan, Connecticut. Now McMansion central, New Canaan was once a place where young architects built modest but innovative houses. In fact, in the 1950s, it was a hotbed of architectural experimentation, with a group of mostly Harvard-trained architects — John Johansen, Marcel Breuer and, notably, Philip Johnson — experimenting with new forms of domesticity, their own version of California’s celebrated Case Study House program.

Among the most famous of the New Canaan homes is Johnson’s own Glass House, which makes each interior zone — living area, bedroom, bathroom, kitchen — visible from the outside. A lesser-known, but in some ways even more spectacular, Johnson creation in New Canaan is the Wiley House, where a wood-framed glass box, containing a living-dining room and kitchen, cantilevers like a diving board off a “bedroom box” made of rough-hewn stone and concrete. The contrast between the smooth and rough materials is stunning. 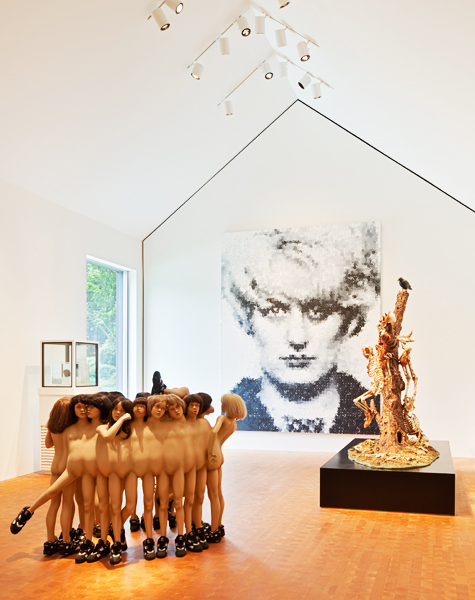 At the Wiley House, in New Canaan, Connecticut, Ferris built a private art gallery on the foundation of a 19th-century barn, topping it with a traditional gabled roof. The owner then populated it with work by such artists as Marcus Harvey and  Jake and Dinos Chapman,.

For Ferris, who was born in 1955 and knew the New Canaan houses as a child, the seeds were planted early. At 14, he went to work for Victor Christ-Janer, a Yale graduate who ultimately built more modern houses in New Canaan than anyone. After college, where he majored in philosophy and economics, and architecture school at Harvard’s Graduate School of Design, Ferris returned to Connecticut to open his own firm. Since then, he has created buildings as elegant and honest as those of his mentors, while keeping up with the tastes of wealthy clients. He maintains offices in Manhattan; Westport, Connecticut; and Bridgehampton, commuting among them by helicopter.

Ferris has projects up and down the East Coast and as far away as the Caribbean and Europe. But one of his favorite jobs was very close to home: renovating the Wiley House for art-collecting clients, a job that involved adding a 7,500-square-foot private gallery disguised as a barn, a subterranean garage and a pool house to the Johnson ensemble. The latter building is so pared-down that the New York Times said it looked less like a building than like “a giant site-specific artwork.”

For all his appeal to the rich, Ferris’s houses tend to be modest, reflecting his belief that less is more, even when it comes to size. A separate bedroom for each child? “I can get eight kids into a twelve-by-twelve room, and they’ll love, it,” he says — a claim he proved true in a house in Sagaponack, Long Island, where the upstairs is devoted to bunk beds that pinwheel around a pair of bathrooms, like a series of elegant ship’s cabins.

And Ferris has a sense of humor. For one client, who was downsizing from a 15,000-square-foot beach house, he created a modest compound that includes an above-ground pool in a pink Corian enclosure. An old Airstream trailer serves as the pool house. True, Ferris has clients with grander ambitions. Typically, he satisfies their need for space — and his for legibility — by breaking large volumes into small ones. An estate in Rhode Island, for example, consists of several gabled boxes — archetypal New England forms — with sheer glass walls overlooking the water. For another client, he created an 8,000-square-foot “sports and entertainment barn” that manages to contain a squash court, a full-sized bowling alley and a screening room, while still sticking to a clear, simple design vocabulary. He has learned that it doesn’t take marble and gold leaf to please his well-heeled clients. “We are always focused on light, scale, materiality and the ease of moving from one space to another,” Ferris says. “Together, those add up to luxury.”

“I can get eight kids into a twelve-by-twelve room, and they’ll love, it.”

Ferris’s success with architecturally rigorous houses has won him many non-residential commissions. These include an underground gallery (“a library of inspiration,” he calls it) for the Watermill Center, the Hamptons arts complex created by his sometime-collaborator Robert Wilson, as well as a hospice on Long Island composed of gabled forms joined by skylighted hallways. “It’s the last front door they’re ever going to pass through,” he says of the hospice patients. “I’m thinking about how profound that is.” Some of his jobs are far bigger than hospices or houses. Ferris’s office projects include the 1.1 million-square-foot headquarters of the bank RBS Americas, in Stamford, Connecticut, one of the largest LEED Gold-certified buildings in New England. 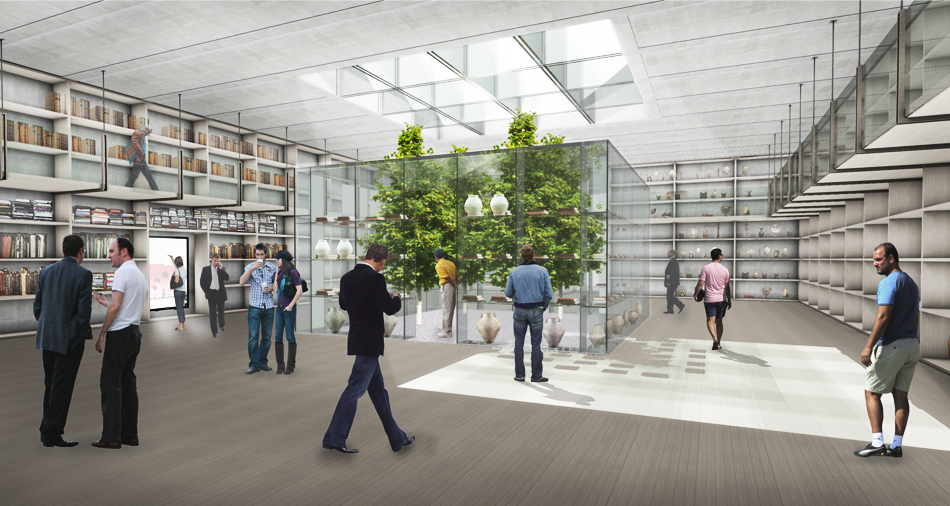 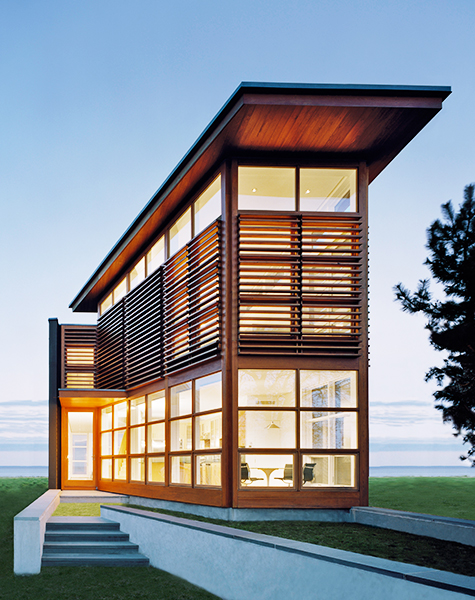 A house sited on a narrow piece of land along the Long Island Sound possesses an appropriately slender footprint.

The clubhouse at the Bridge is also easy on the environment: Its large clerestory windows provide copious daylight, reducing the need for electricity. Other green features include a roof designed to collect rainwater, which is stored in cisterns and used for irrigation, and windows that open, allowing natural cross-ventilation.

But there is much more to the structure than its environmental cred. Its slat-covered entry façade suggests a homey front porch, which, Ferris says, “speaks of summer in an abstracted way.” Inside, the building has the feel of a gallery: Artworks include multiple Richard Prince paintings, a Damien Hirst shark and memorabilia from the racetrack that once occupied the site. All were chosen by the club’s founder, Robert Rubin, a student of modern architecture who says that Ferris “took my very personal vision of the property and made architecture out of it.”

The building, Rubin adds, “redefines a previously conservative typology — the country club — as an open, serene, flowing space.” Those are words that would make any architect, not least of all a descendant of New Canaan’s pioneering modernists, proud.