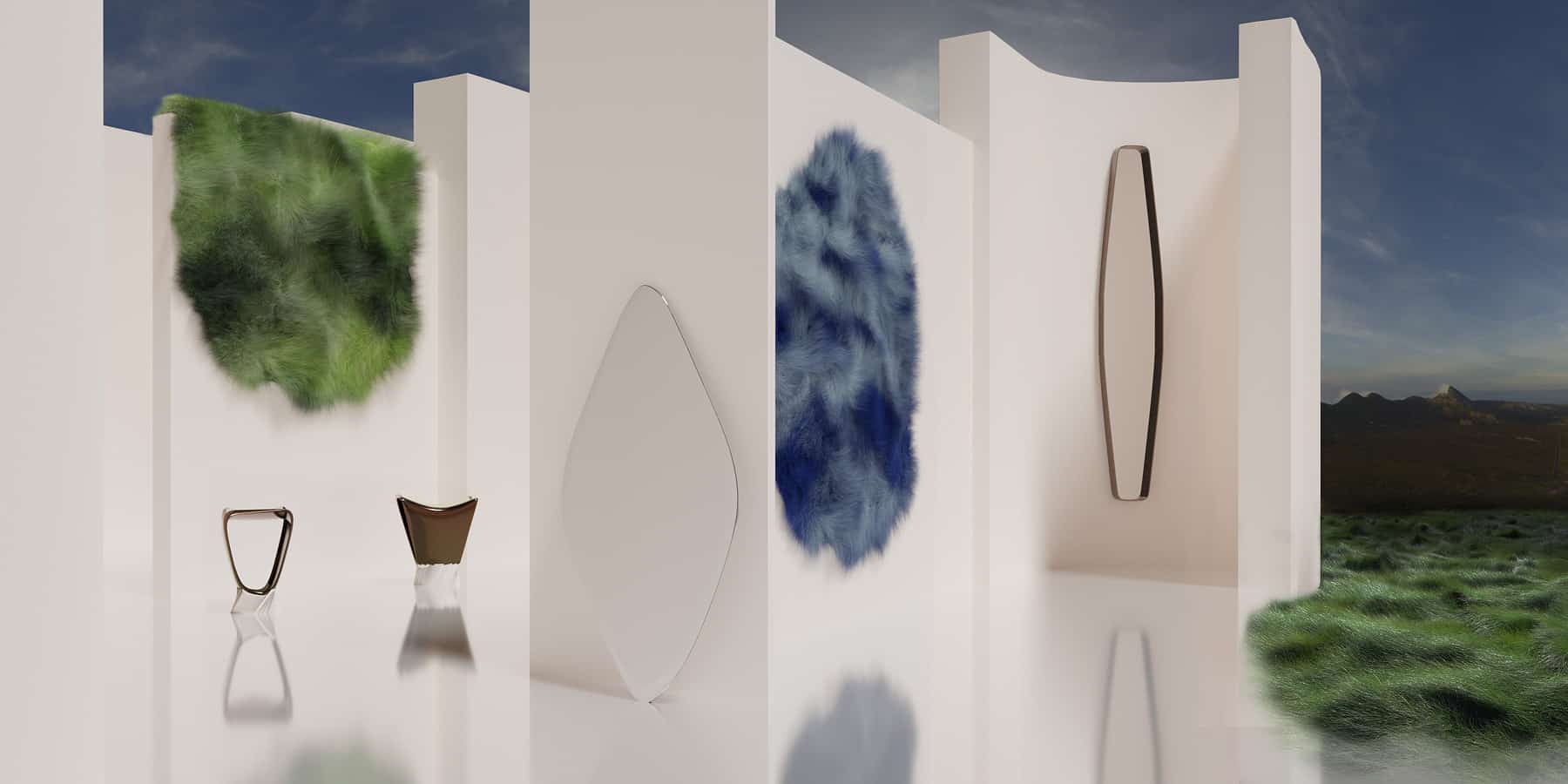 Known for her unique commissions and limited editions of furniture by contemporary makers, Los Angeles native Rebecca Ross Carlén will soon expand her Galerie SORS beyond the French capital with an outpost in the South of France.

In this time of transition for art and design galleries around the world, contemporary furniture dealer Rebecca Ross Carlén, founder of Galerie SORS, in Paris, has decided to expand. “We’re not pulling back,” she says in a telephone interview three weeks after France allowed businesses to reopen from the coronavirus shutdown. “I’m investing more, producing more pieces, working with new designers,” she says, noting that she’s also found a location in the South of France for her first satellite gallery.

A former luxury real estate broker from Beverly Hills who landed in Paris after marrying a Swede, Carlén founded Galerie SORS in 2015 and two years later opened a space in the 7th arrondissement on the rue de Varenne, across the street from the Rodin Museum. Classic Haussmannian in style, with high ceilings and decorative moldings, it became the headquarters of a contemporary design firm devoted to commissioning and selling bespoke furniture created by carefully selected European craftspeople.

The inventory at SORS (its name is the Old French word for “source”) includes the liquid-graphite-coated Low Key table by Luxembourg-based Privatiselectionem; a pigmented-resin wall sculpture by the French artist Rémi Capdepuy that looks like an imaginary planet; and Creux, a patinated cast-bronze lounge sofa that was designed by Carlén herself.

SORS pieces are highly textural and hand-finished, made of natural materials by artisans who use contemporary techniques to create what Carlén calls a postmodernist look.

“We’re working with stone and brass and funkier materials like gunmetal, often placing them in a home with more comfy pieces,” she says. Everything she sells, she adds, fulfills an aesthetic as well as a functional role, meaning that each piece “works as a table or a chair or a lighting element but is also clearly a sculpture in the middle of the room.”

The firm’s business model is client-centered. SORS serves as a kind of liaison between designers who create and collectors who commission original pieces for private spaces. When a design is completed, the gallery will produce up to eight editions of it, one of which will go on display in the showroom, while the rest are offered for sale in the conventional way.

Carlén grew up in Los Angeles, where her mother was a realtor. “So, I was always around properties and homes and remodeling and renovating projects,” she recalls. After college, she followed in her mother’s footsteps, moving into the high-end real estate sector in Beverly Hills, where she worked both as a broker and as an interior decorator for about 12 years.

“When I relocated to Paris and started a family, I had a few years to think about what I was going to do,” she says. She visited museums and galleries and got to know the work of European artists like the design duo Privatiselectionem, who create the kind of quirky architectural furniture made of raw and textured materials that Carlén loves.

She had found her niche. “So many established design galleries are dealing with equally established artists or well-known mid-century modern designers,” she notes. “We’ve made our thing about being involved with contemporary production and new talent — people who are creating things right now who aren’t already famous.”

The coronavirus shutdown in France motivated her to accelerate a plan she had been developing to create a second showroom in the South of France. She had already found the perfect space: a 2,500-square-foot, 40-year-old raw-concrete brutalist house in the style of French-Swiss architect and designer Le Corbusier.

The structure is located in the spa town Digne-les-Bains, at the base of the French Alps. “It goes well with the styling of everything that we represent and create,” she says. “It is also such a find in Provençe, with beautiful views and lavender growing all around.”

Carlén expects to begin renovating the building in the autumn and start welcoming visitors in early 2021.

“Often, we see that collectors come to Paris and then tour the South of France looking for pieces, so we’re tying into that,” she says. “We will be offering them a whole experience. We can help accommodate them at four- or five-star hotels at the base of the Alps, then bring them to the house to see the pieces and have a real Provençal experience.”

Carlén hopes that the new space, situated on nearly four-and-a-half acres of land on in the Alpes-de-Haute-Provence, will allow her to present both indoor and outdoor installations, as well as special events, such as an annual gathering of VIP clients. In the meantime, she’s focused on reopening and pursuing her mission.

“I can’t say that business is a hundred percent like it was before this whole disaster,” Carlén says, “but I have been pleasantly surprised by the amount of activity we’re getting.” The majority of her clients, she adds, are “coming back and finishing out what we were starting, so I’m actually very optimistic.” 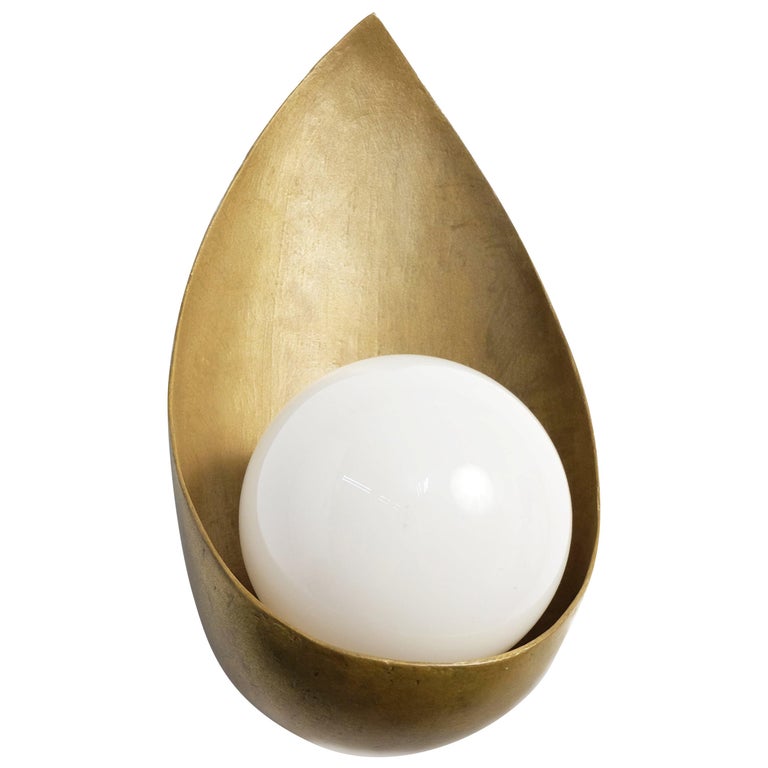 “​This is one of the twin wall-mounted light sculptures, made from the same sheet of fine brass​ and​ hammered by the hands of a single young blacksmith in his home atelier in Paris. The two pieces are the same but different, imperfect and unique. Complex by nature, the design is an elegant, seemingly simple form that is exceptional. This design is an homage to early-twentieth-century brutalism and is offered in a limited edition series of eight, plus two artist proofs.” 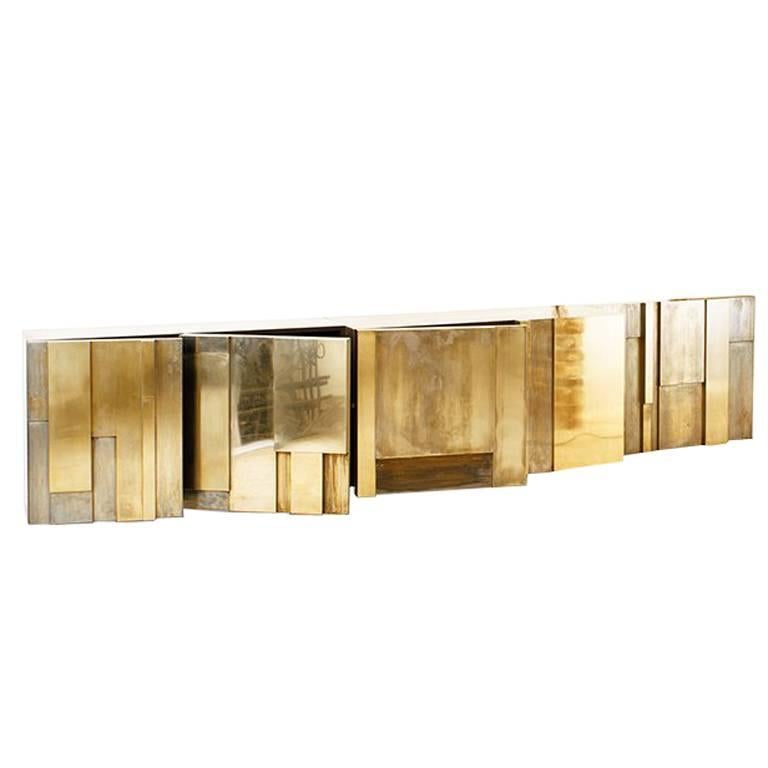 “MUR is absolutely one of my favorite sideboards. More than just award-winning, the design reinvents itself with each production that leaves the designer’s workshop. This piece fascinates with its complex beauty, both elegant and strong. The intricately placed layers of brass sheeting are each finished in a freehand way, which makes each sideboard a unique offering.” 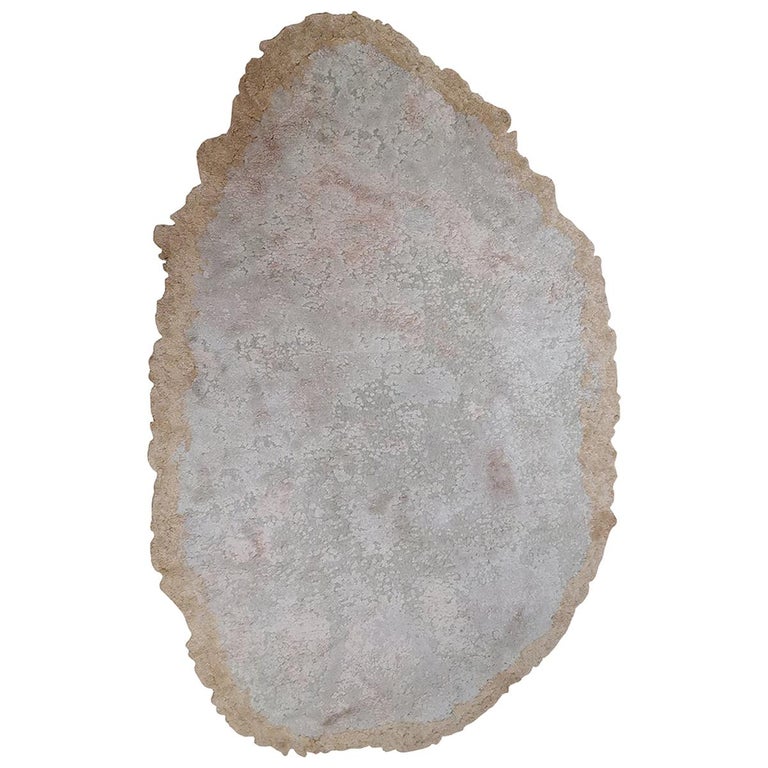 “Supersonic is a design adapted from the Riot collection of the renowned German rug designer Jan Kath, but it’s also a departure for him. This retro, shag-style monster made of furry, hand-knotted silk and wool isn’t exactly typical of his work, but our collaboration turned out perfectly. We integrated four distinct pile heights and a perimeter color halo.” 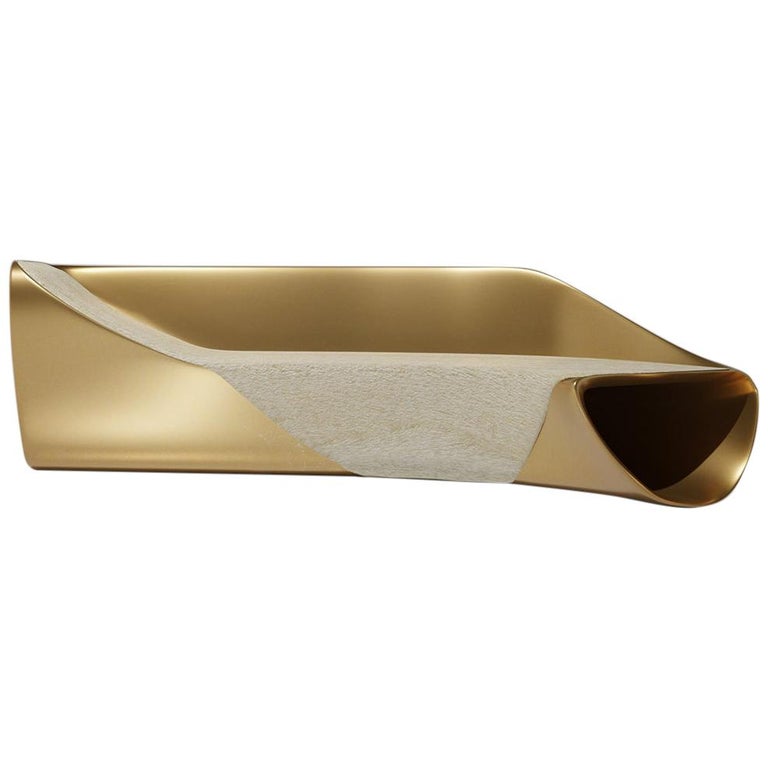 “First conceptualized in the autumn of 2019, this sofa was originally an attempt to design using negative space. It turned into a canapé that is a wonder of opposites. At first glance, the cast-bronze curves seem heavy and imposing, but look closer and you will see that the body is hollow, giving way to a sense of lightness.” 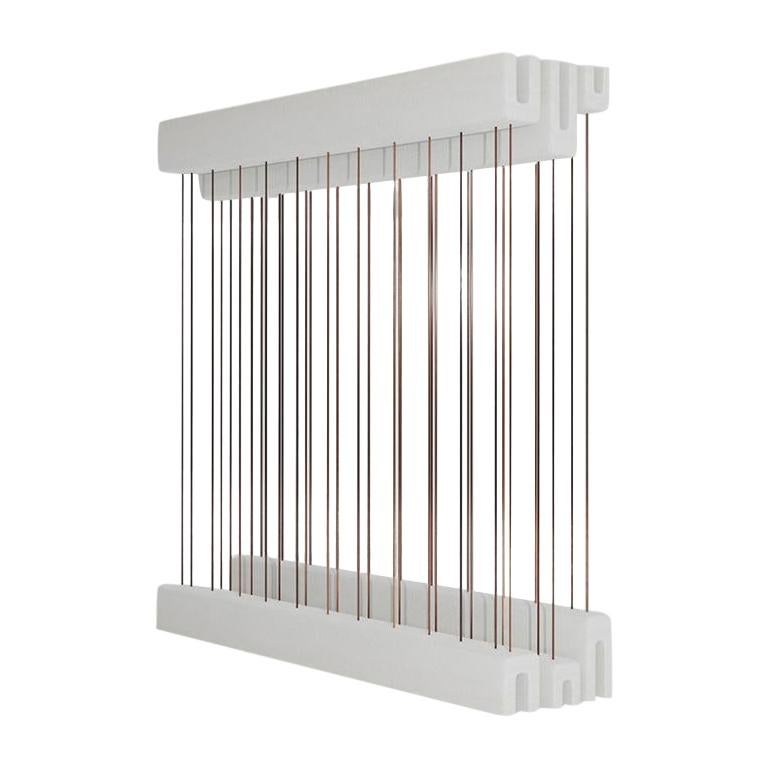 “This piece, which we created this year, is both a screen and a sculpture, a kind of physical and aesthetic frontier between design and architecture. The rawness of the cement finish and refinement of its metal elements form shapes that nod to the philosophy of modern brutalism.” 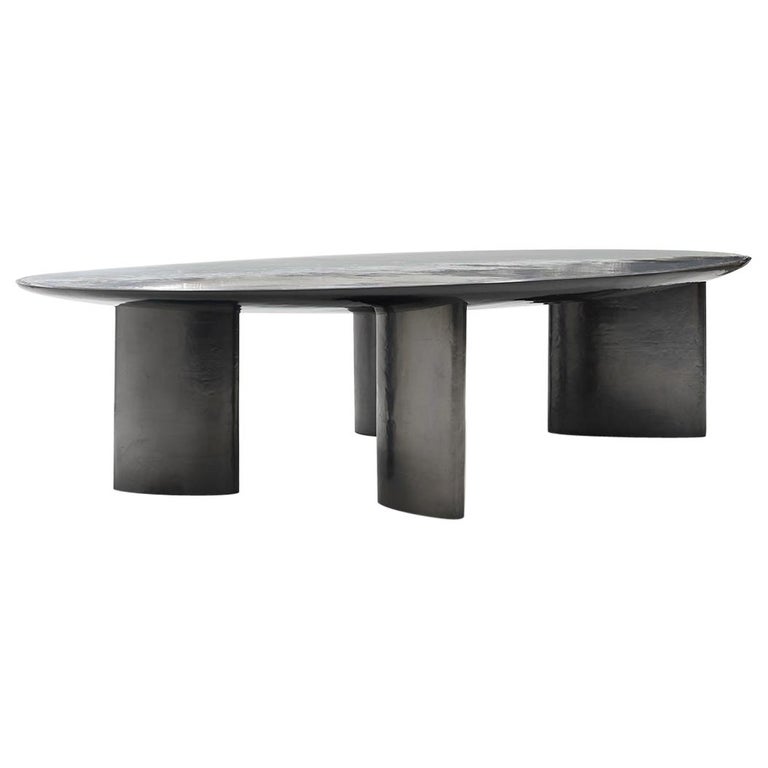 “This piece was named after the installation site of its initial commission: the main conference room of a prestigious law firm on avenue Foch in Paris. An avid collector, our client required a functional piece that presents itself as a work of art. The results were stunning. A silvered gunmetal top whose underside is blackened combines with a base made of four unique metal ellipses. We included it in our exhibition for Paris Design Week in 2017, and all subsequent commissions have been not for conference rooms but for residential dining.” 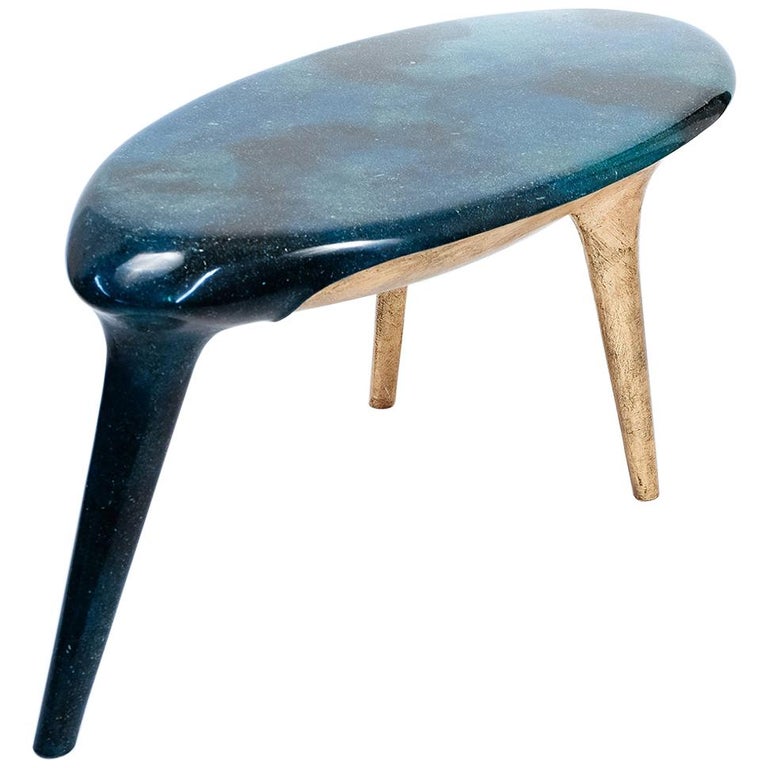 “A true design original, the A Noste bench is part of a three-piece collection for SORS by newcomer Rémi Capdepuy, a young Bordeaux-based French designer and artisan. He’s a carpenter skilled in traditional woodworking who fabricates each piece start to finish and entirely by his own hand. His work is defined by handsome curves, and his vision romanticizes the complex relationship between nature and humanity.” 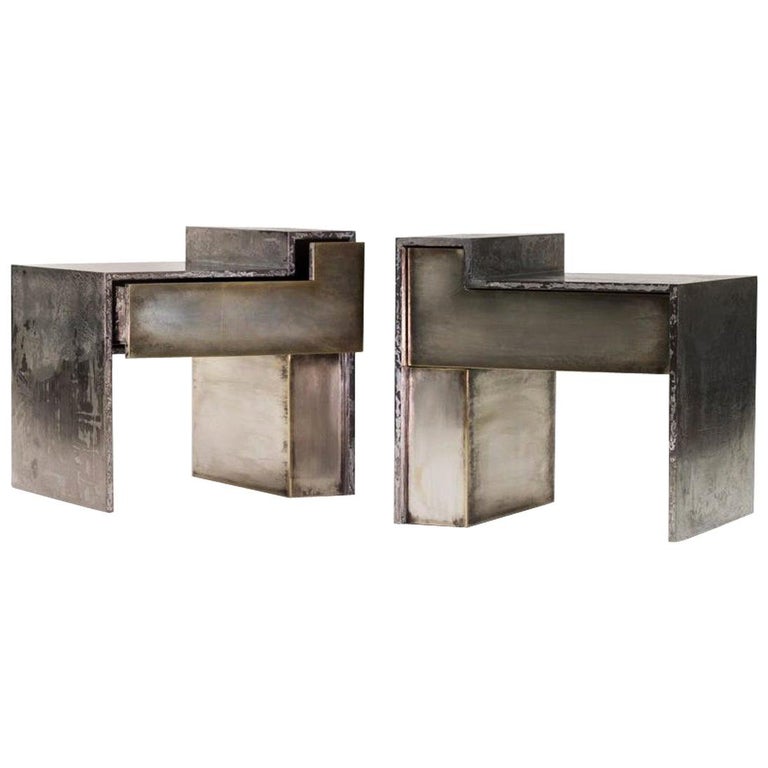 “I love the way such a small little bedside table can command its place in a room. It’s simply a strong piece of modern design, comprising hard right angles, heavy layers of gunmetal and patinated silvered brass. The interior finishing of the small drawers is as brilliantly done as the exterior, and it’s completed with a touch of a shimmering charcoal velvet lining.”