Our Late-Summer Reading Roundup, Part II: Design Books That Will Get You Daydreaming 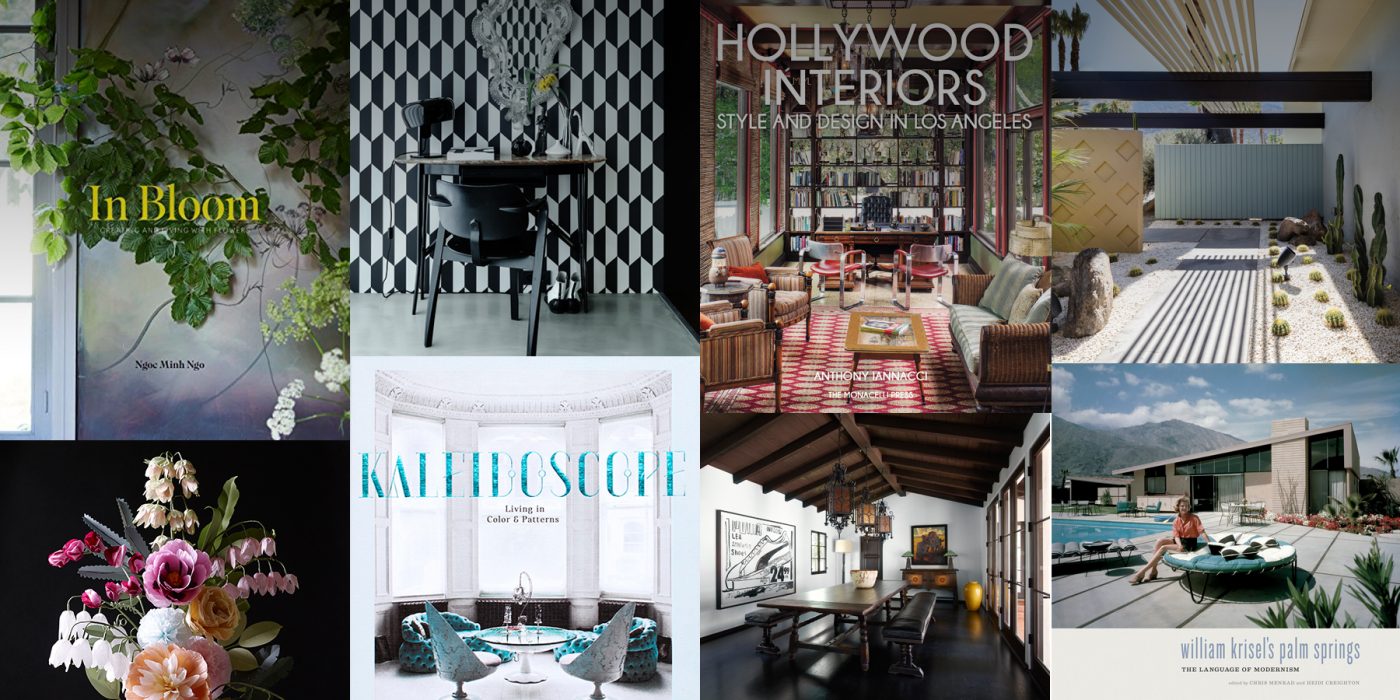 For those of us in the Northern Hemisphere, August is all about ripeness and the beginning of the true harvest season. And right now, good books are nearly as plentiful as zucchini in our vegetable gardens. The four volumes below all have seductive beauty as their theme, whether it’s the angular lines of a pioneering modernist or the actual flora in a guide to appreciating plant life in the broadest sense. 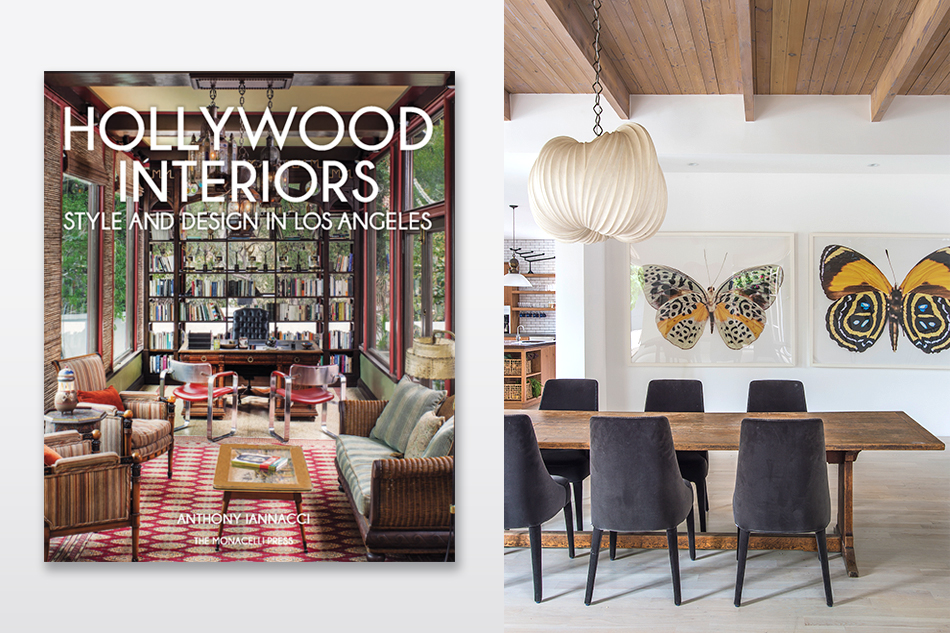 Design writer Anthony Iannacci’s new book gathers together some of the finest interiors in Los Angeles right now. These include a home designed by Olivia Williams where the dining room centers on a 19th-century table from a schoolhouse. Chairs by Antonio Citterio for Maxalto surround the table, and butterfly prints by visual artist, cinematographer and director Samuel Bayer hang on the wall behind. Photo © Matthew Williams Clean 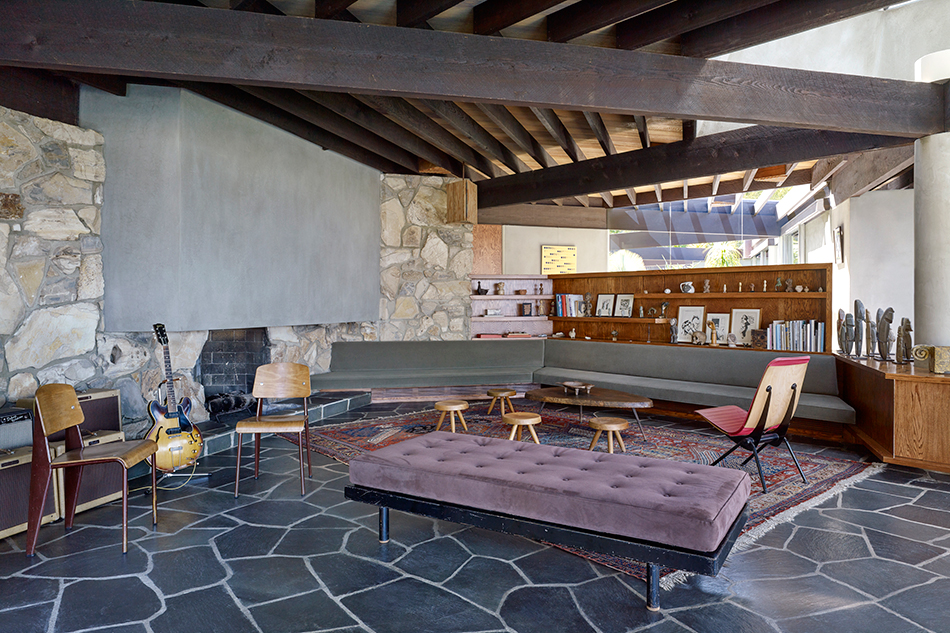 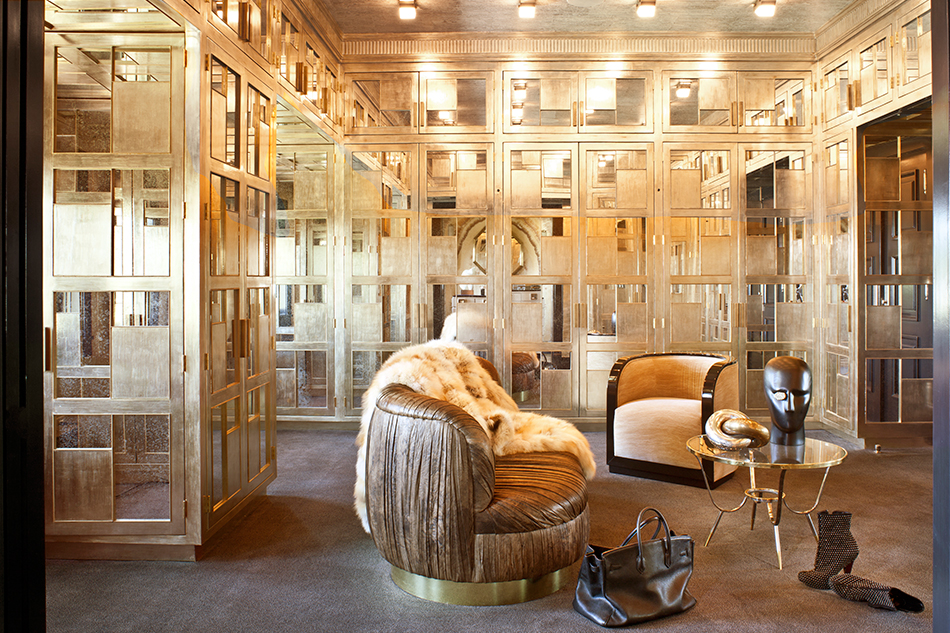 For the female side of the his and hers dressing rooms she created in a lavish and luxe 10,000-square-foot home, Kelly Wearstler covered the walls in gold-leafed wood paneling inset with antiqued mirrors and trimmed with antiqued brass. The Soufflé sofa is her own design, while the armchair is vintage. Photo by © Grey Crawford 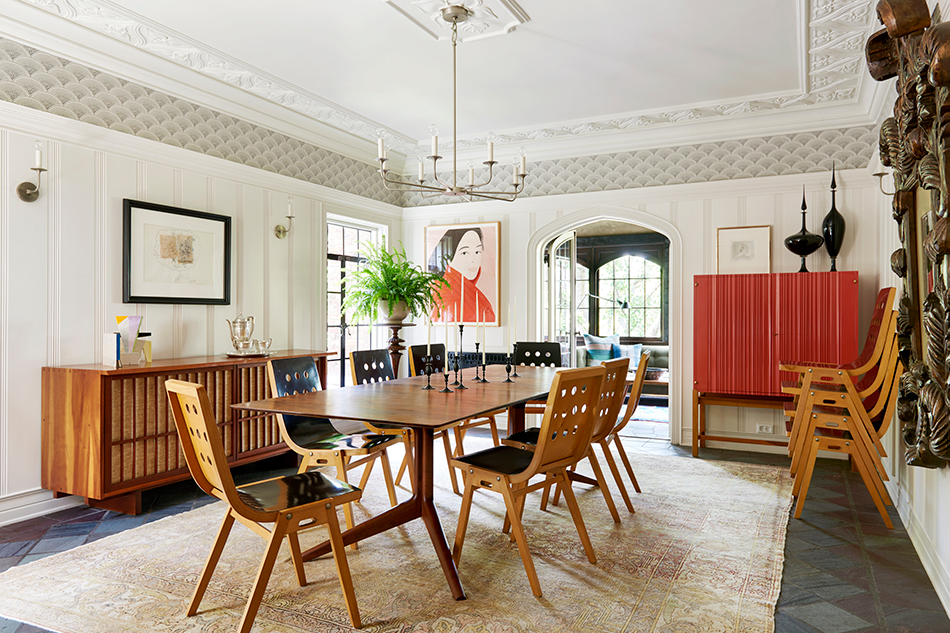 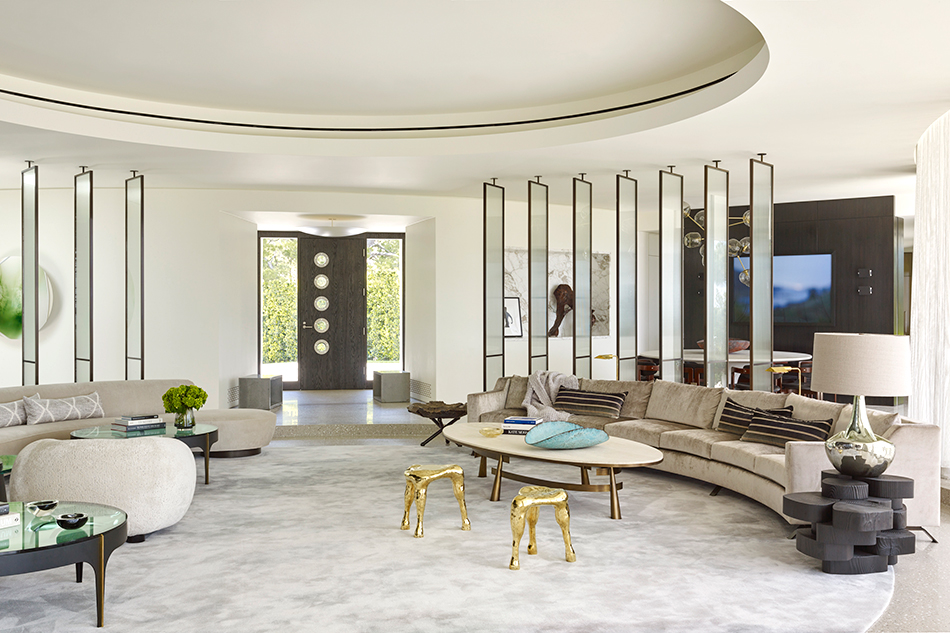 Jamie Bush created a custom rug, sectional sofa and pivoting bronze and reeded-glass screens for the curvaceous sunken living room of this classic mid-century home. The sculptural blackened-wood side table is by Stefan Bishop, and the brass stools are by the Haas Brothers. Photo © Peter Murdock 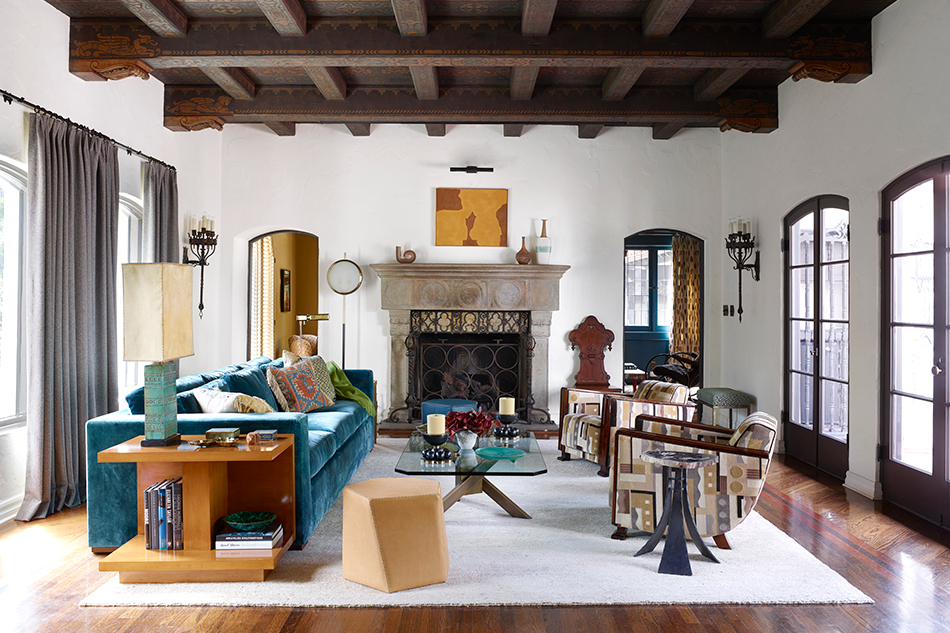 In the living room of a Spanish-Moorish Revival home from 1922 — whose original hand-painted wood-beamed ceilings remain in place — the design firm Commune positioned a custom couch upholstered in an unexpectedly vibrant silk velvet opposite a pair of patterned 1930s club chairs. Photo © Richard Powers

We all need a fat, fancy book like Hollywood Interiors: Style and Design in Los Angeles (Monacelli Press) on our coffee tables, no matter what the season. Design writer Anthony Iannacci has curated just the right mix of Southern California styles: a white Richard Meier–designed house; a Spanish tiled-roof number; a 1940s modernist gem. The designers include the very well known — Kelly Wearstler, Trip Haenisch, Cliff Fong, Commune — and the less so.

In his introduction, Iannacci makes clear that Los Angeles (from Malibu to Silver Lake and beyond) is generally enjoying a revival as a design hub, and the images that follow certainly prove the point. There’s not too much text to interfere with your enjoyment of the lush photos, all printed at grand size and on heavy stock.

Southern California modernist architect William Krisel, now in his early 90s, has designed 40,000 houses over the course of his long career. Some 1,500 of these have been in Palm Springs, including the tract home from 1957 at right. (Krisel’s wife, Corinne, serves as the model.) Photo by Julius Shulman 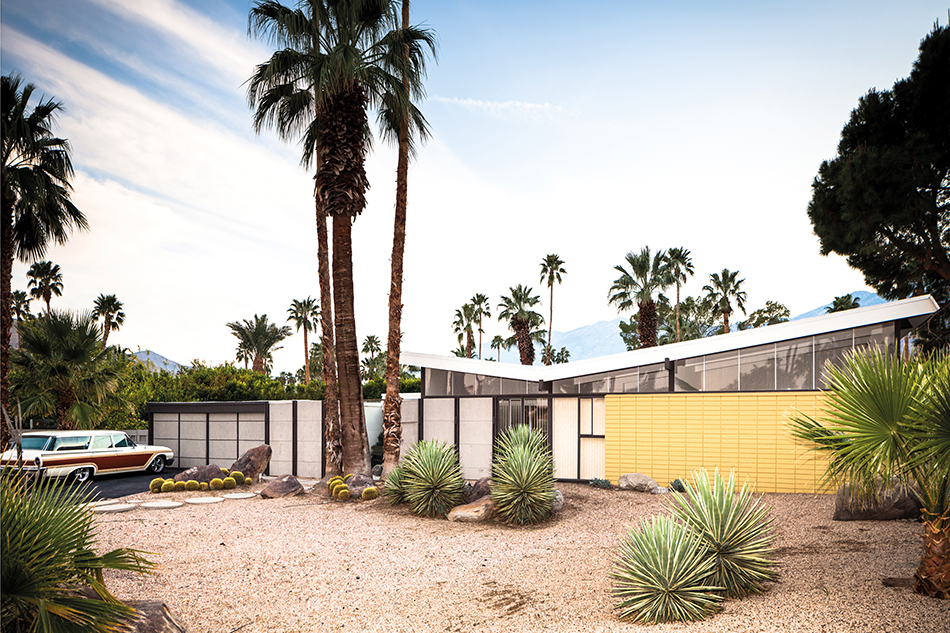 Among Krisel’s favorite design elements were the clerestory window and the butterfly roofline, both of which can be seen here in a 1957 house in the Twin Palms neighborhood. Photo by Darren Bradley 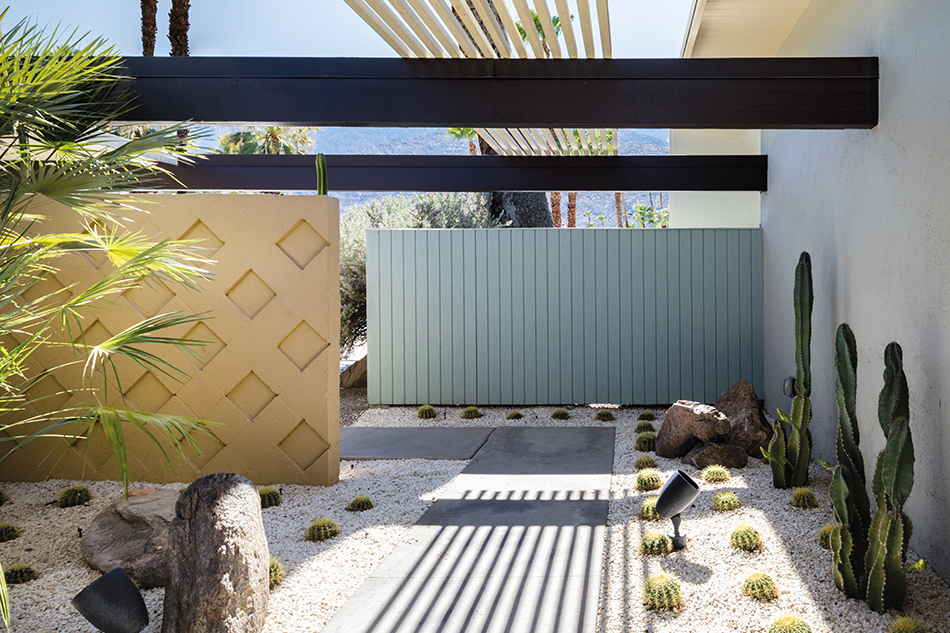 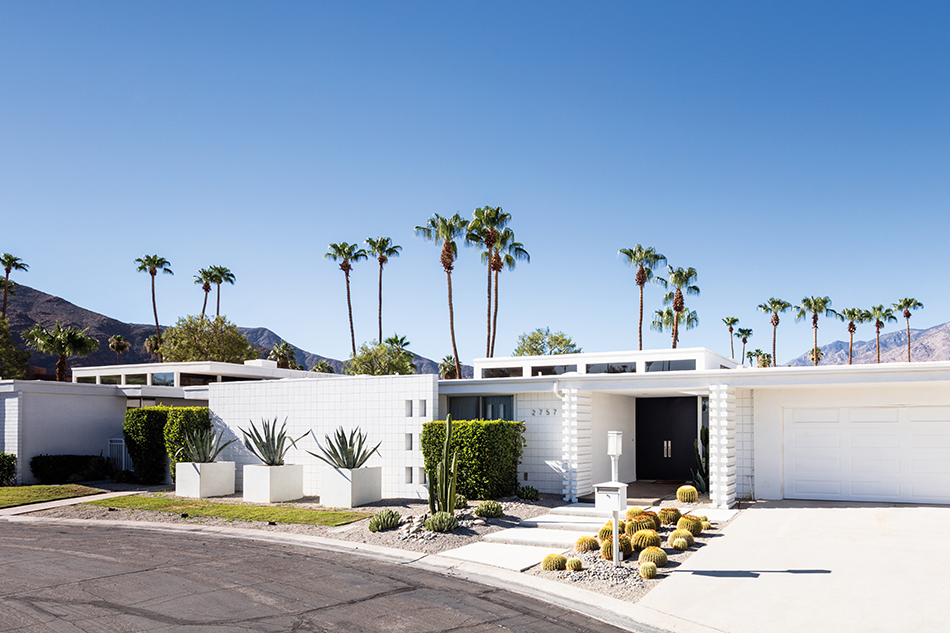 A different facet of Southern California design is on display in William Krisel’s Palm Springs: The Language of Modernism (Gibbs Smith), edited by Chris Menrad and Heidi Creighton. The legendary architect was born way back in 1924 but is still alive and kicking and even contributed to the book: “Modernism is not a style,” he says on its very first page, stating that it’s a philosophy instead. During his decades of designing, he has brought joyous elements like clerestory windows and flaring butterfly rooflines to a number of  residences, especially tract homes.

The designer so far of some 40,000 living units, 1,500 of them in Palm Springs, Krisel deserves serious scholarly treatment, and in this book he gets it, with essays by different writers on a variety of topics (landscape architecture among them, as well as his custom work) and some individual houses. Coeditors Menrad and Creighton both own, live in and have restored Krisel-designed homes, and their appreciation for his rigorous work is evident. The pictures, many from the architect’s extensive archive at the Getty Research Center, have one thing in common: They make you want to move into these homes immediately, seeking refuge from the desert sun. 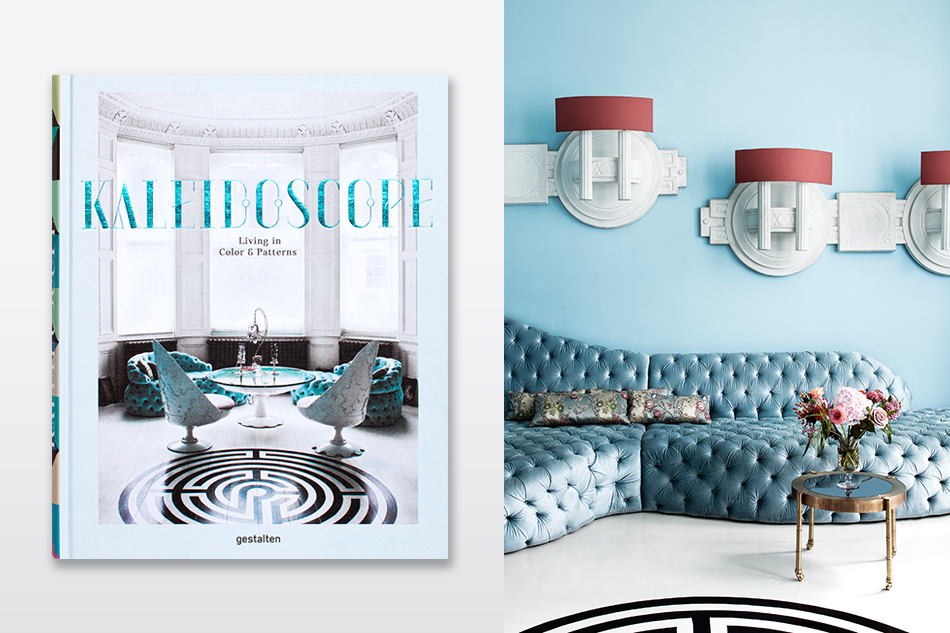 Kaleidoscope’s richly hued and intensely patterned interiors inspire bold decorating choices. But even “bold” barely begins to describe the aesthetic decisions made by interior designer Danielle Moudaber in her fantastical, baby-blue London home, where the large living-room sconces trace their origins back to a French bank that closed in the 1940s. Photos by Rei Moon 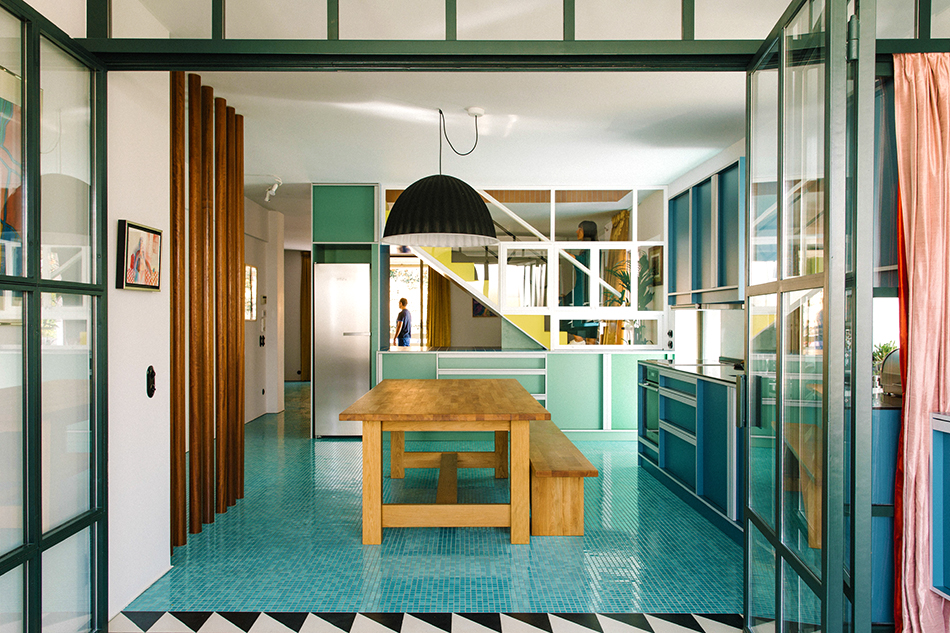 Point Supreme Architects washed the kitchen of a loft-like family apartment in Athens in sea foam hues, designing a staircase that also serves as a storage unit and room divider. Photo by Yannos Drakoulidis 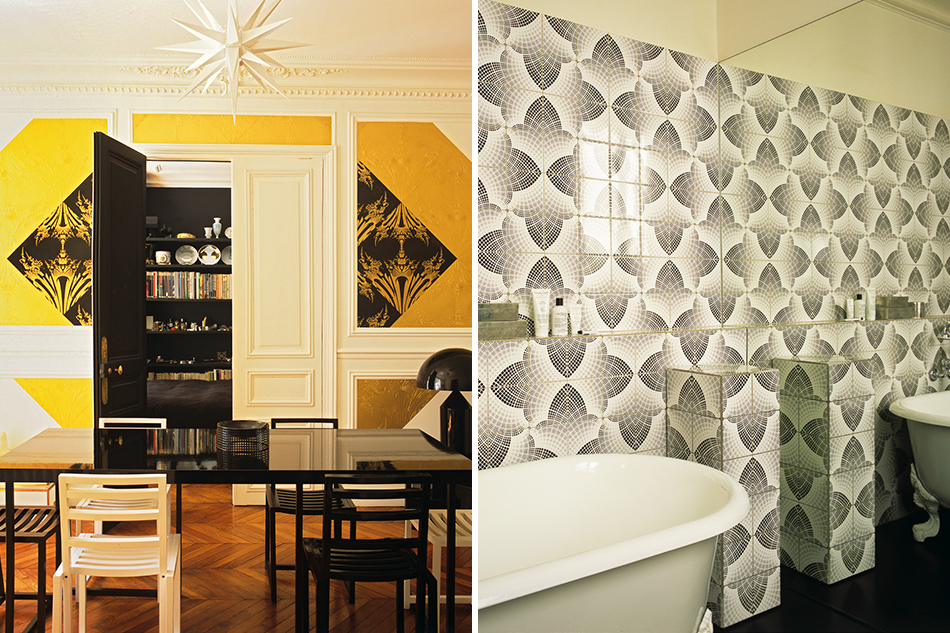 Kaleidoscope’s authors write that the designers of this Paris apartment, Emmanuel Bossuet and Marie Laure Bellange, “balanced ornamental details found on the fireplaces, moldings, ironwork, and envy-inducing parquet floors with subtle contemporary touches and era-hopping accoutrements.” Not least among the latter are the custom-created black-and-white graphics with touches of gold on the walls of the bathroom, kitchen and dining room. Photos by Joanna Maclennan 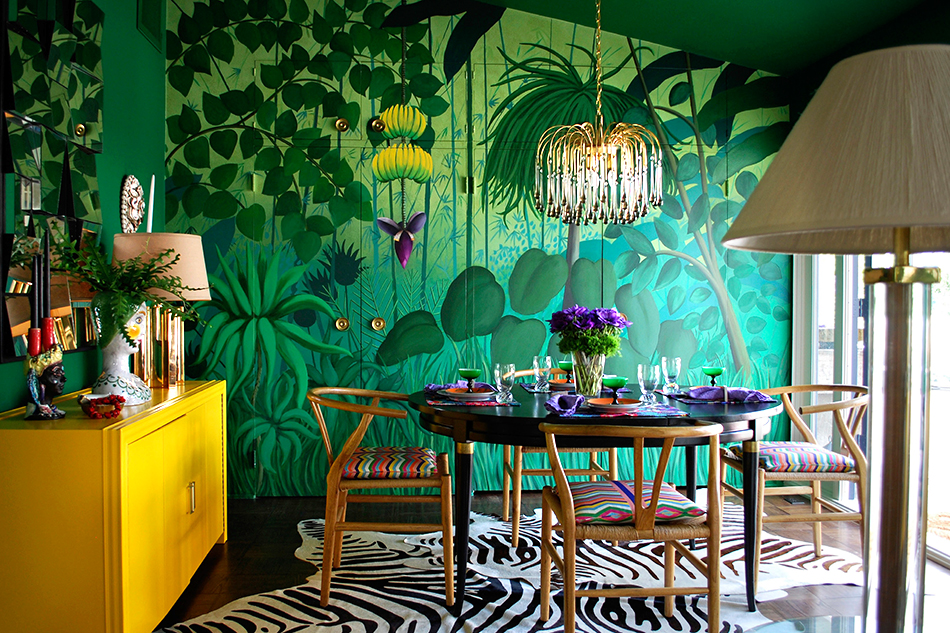 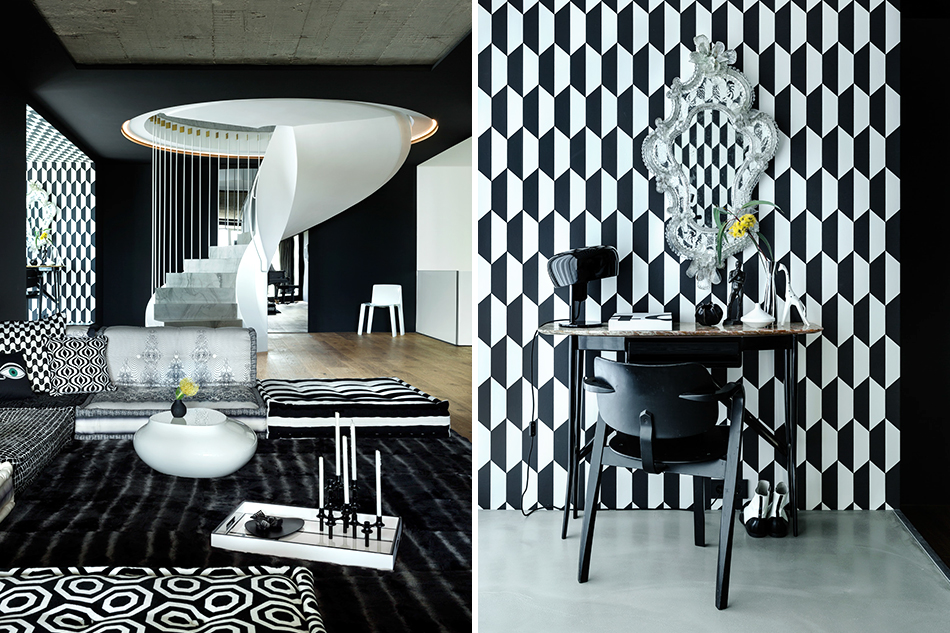 In Munich, the designers of raumstation Architekten imagined an M.C. Escher–meets–Harlequin black-and-white scheme for a home in a former bunker built in 1943 to shelter up to 700 people. Photos by Christine Bauer/Munich 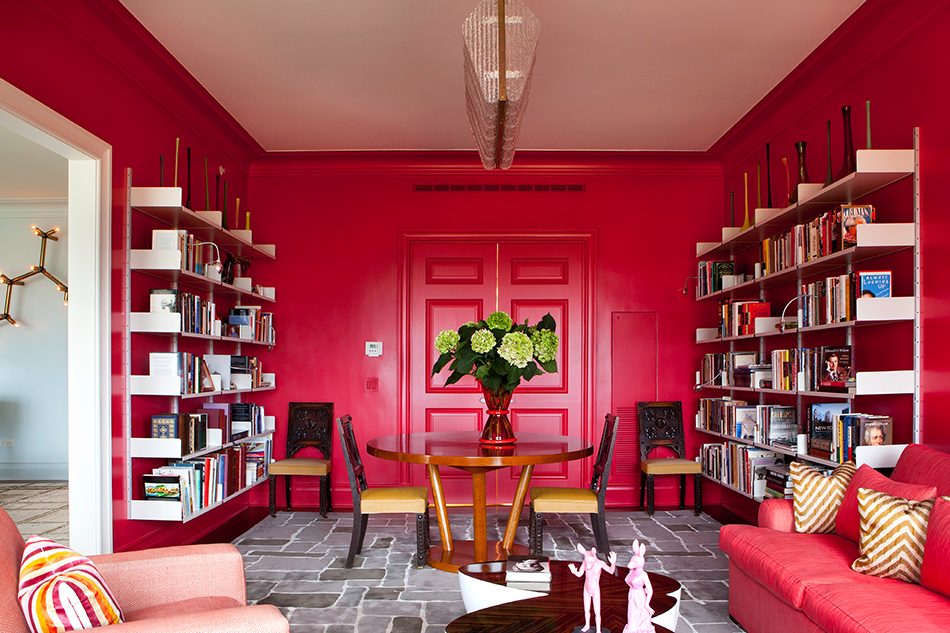 For an apartment in the Robert A.M. Stern–designed 15 Central Park West, on New York’s Upper West Side, the design firm D’Aguino Monaco used bright red walls to set off the clients’ collections of books, design objects and furnishings. Photo by Ariadna Bufi

Let’s face it: Europeans are simply better at creatively juxtaposing old and new and turning dazzling incongruities into workable living situations. That, at least, is one of the lessons conveyed in Kaleidoscope: Living in Color & Patterns (Gestalten), by Svenn Ehmann and Robert Klanten. The title’s use of “in,” versus the usual “with,” is instructive The mostly European interiors on display in this large-format, brightly hued tome — homes, hotels and bars among them — are immersive in every sense of the world.

Not that the United States gets totally shorted. There is a snazzy 15 Central Park West pad, in New York City, by the firm D’Aquino Monaco, with lots of red and lots of art on the walls, and two Washington State projects: a sophisticated Seattle hotel by Nicole Hollis and a relatively understated log cabin on Vashon Island. But the overall flavor of the book is best exemplified by an Essex, England, home — by FAT Architecture and the artist Grayson Perry — that is clad head-to-toe in vibrant green and white ceramic tiles. As for the interior of the house, well, let’s just say that every piece is a “statement piece,” indeed. If the decor of your next design project should need a boost, drawing just one percent of your inspiration from these interiors would put some pep into it.

In Bloom: Creating and Living with Flowers
by Ngoc Minh Ngo 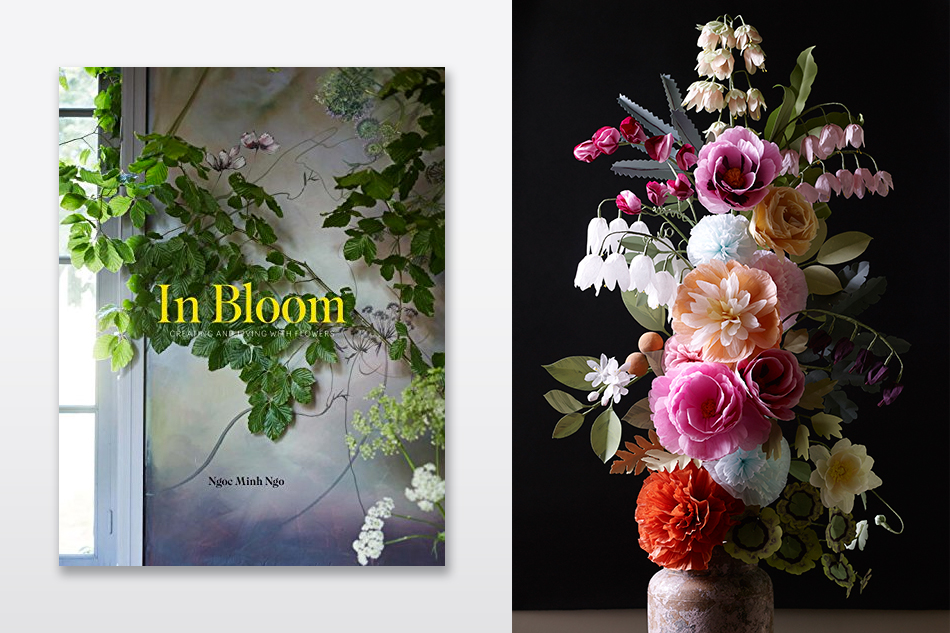 Photographer Ngoc Minh Ngo’s In Bloom beautifully portrays how a dozen creative types live with flowers — real, ersatz and depicted — in their homes. In the New York City borough of the Bronx, for example, former florist Livia Cetti makes paper flowers of incredible verisimilitude through her studio, the Green Vase. Photos by Ngoc Minh Ngo, courtesy of Rizzoli 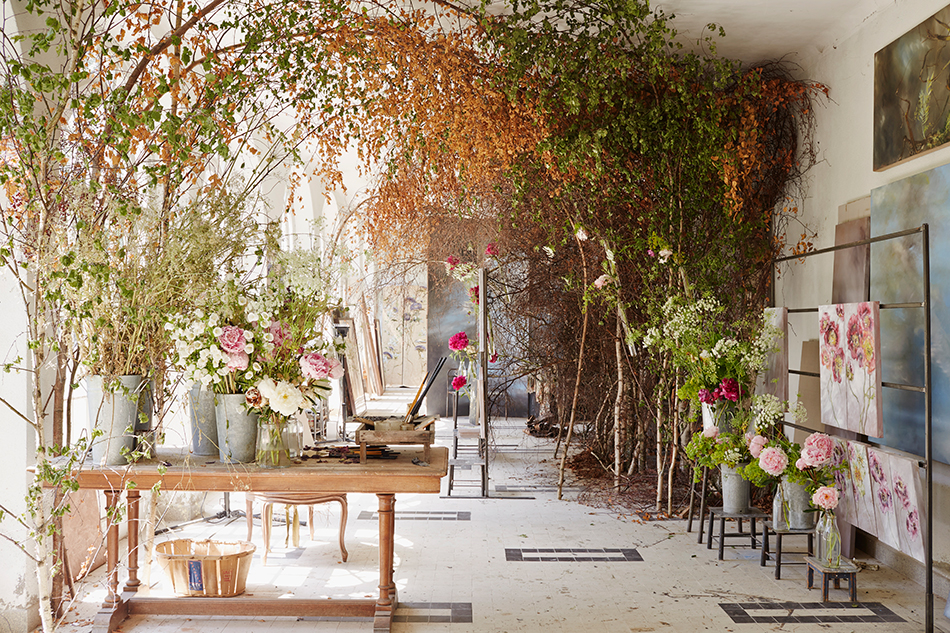 In Echassières, France, painter Claire Basler turned the orangerie of her 13th-century château — which is surrounded by 80 acres of woodlands and meadows — into a light-flooded studio. “She loves all flowers — peonies, poppies, irises, delphiniums, daisies, nasturtiums, roses, lilies, Queen Anne’s lace, buttercups,” Ngo writes, “and they appear in abundance on her canvases and on the walls of her magical home.” 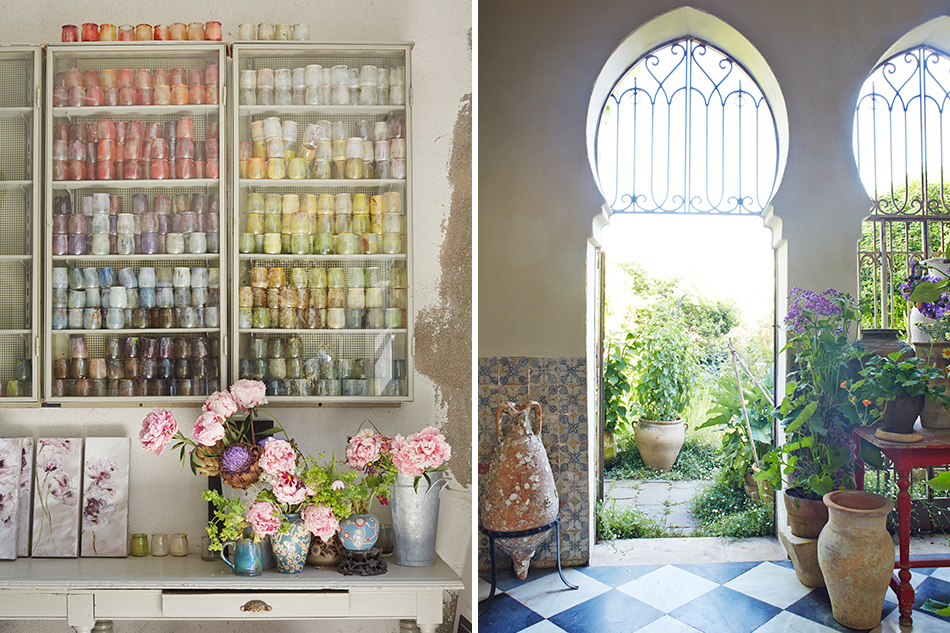 Left: Tinged by the colors of her gentle palette, and arranged by hue, Basler’s paint-mixing jars sit above a series of her smaller canvases and abundant arrangements of peonies. Right: In the home of Italian writer and horticulturalist Umberto Pasti, located outside Tangier, Morocco, plant life placed on both sides of a series of Arabic arches connects the indoor with the outside. 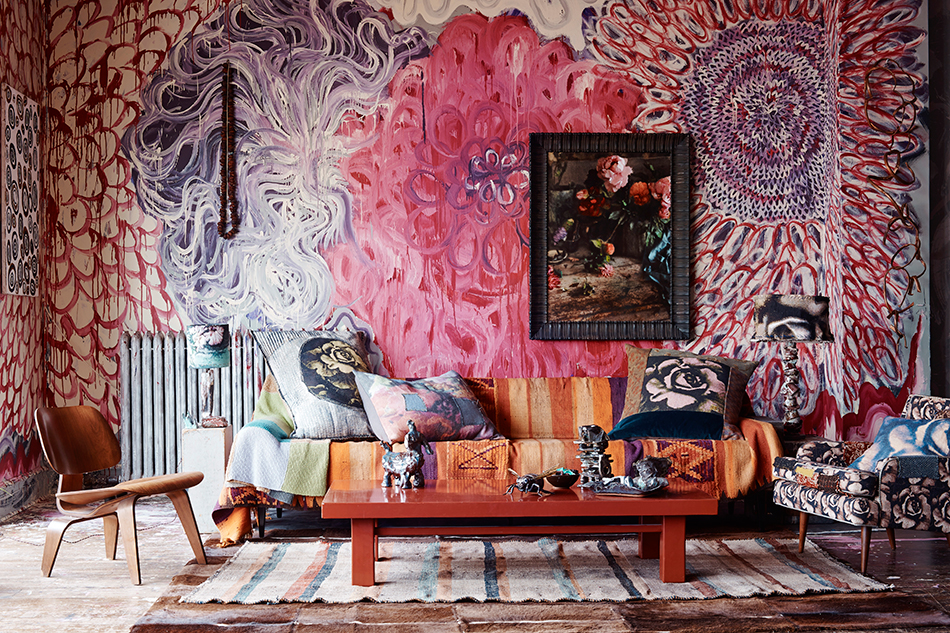 In the New York loft of multitalented photographer and designer Martyn Thompson and his partner, artist Drew Hornbuckle, a Hornbuckle mural of expansive blossoms serves as a backdrop for fabrics from Thompson’s first textile collection, Cézanne‘s Shadow. Thompson based the line on a series of floral still-life photos he made, which themselves took inspiration from Impressionist paintings. His photograph After Prague hangs above the couch. 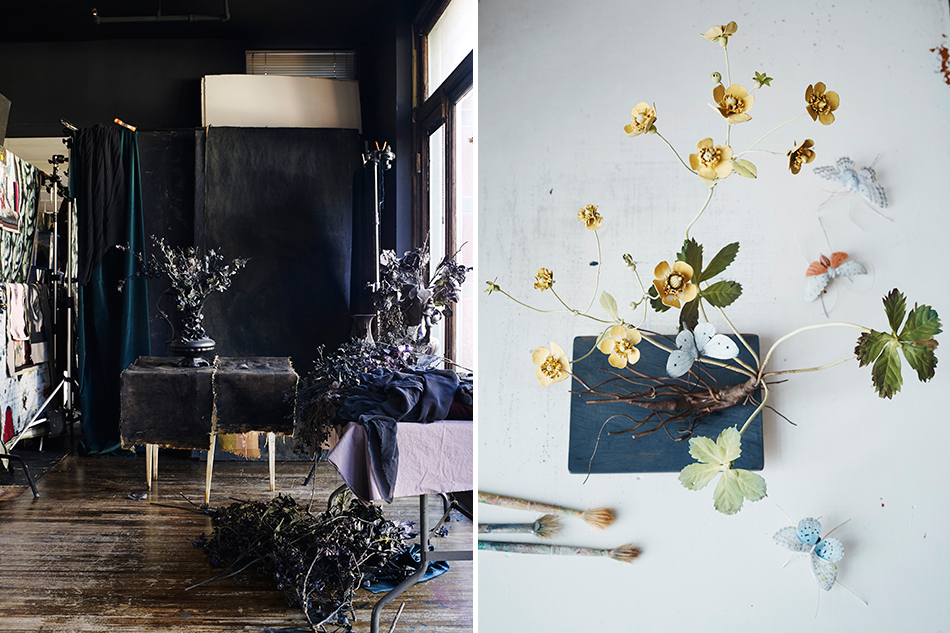 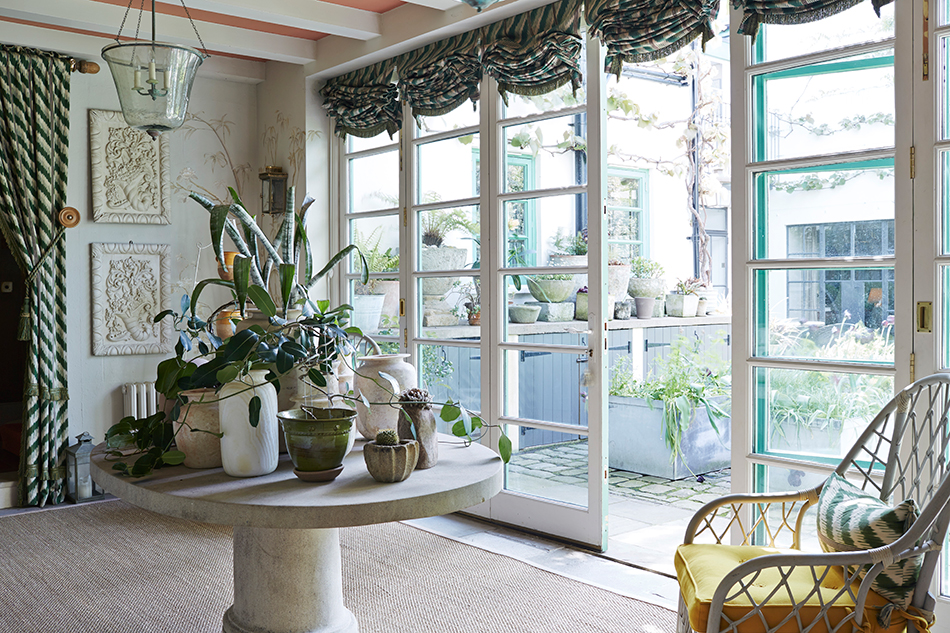 Situated in a busy part of London, the home of artist Neisha Crosland, Ngo writes, “wraps itself around a central garden” filled with a lush and lively collection of plants — climbing roses, clematises, jasmine, strawberries, kiwi trees and more. Here, in the entry hall–cum–garden room of the house, Crosland commissioned fellow artist Rosie Nemen to paint bamboo stalks against a pale blue backdrop, echoing the greenery outside and on the center table.

Coming out at the end of this month, In Bloom: Creating and Living with Flowers (Rizzoli) is the second book by Ngoc Minh Ngo on the topic of how aesthetically minded flower-loving individuals coexist with flora in their homes.“Ngo, a self-taught photographer, has published her pictures widely in such major outlets as Martha Stewart Living, and in addition to being truly devoted to her topic, she has a wonderfully expansive conception of what it embraces.
Her images of photographer Oberto Gili and his Italian retreat in Piedmont, for instance, include several showing his garden’s lovely bounty, plus others capturing Gili’s own large photographs of flowers. We also see Livia Cetti, who lives in the Bronx — a borough too often overlooked by design books — with the stunning paper flowers she makes. These ersatz blooms, which Cetti creates through her studio, the Green Vase, hold the eye as long as the real ones do. London artist Rachel Dein creates haunting plaster casts of flowers that enable us to see their amazing forms without the distraction of color. For those who want shots of verdant plantings, there are lush views of the Long Island and Brooklyn homes of landscape architect Miranda Brooks and her husband, architect Bastien Halard. (Brooks was recently featured in T magazine with her scheme for Vogue editor Anna Wintour’s garden.) With her resolutely nonliteral approach, Ngo takes her subject well beyond mere beauty and into the sublime.