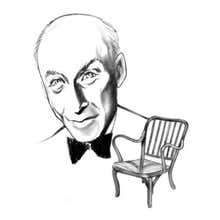 The son of a successful Viennese textile manufacturer, Frank studied architecture at Vienna Polytechnic, graduating in 1910. From the first years of his practice, he marched counter to the orderly, symmetrical architectural layouts and decors prescribed by contemporaries such as Adolf Loos. Frank drafted rooms of varying shapes and called for flexible interior-design arrangements. His furniture pieces are light and easy to move — and his chairs are always made of wood, most often with lushly curved steam-bent arms and slatted backs. Frank openly loathed the tubular steel furnishings and “machine for living” aesthetic promoted by Le Corbusier and Ludwig Mies van der Rohe and other Bauhaus principals. “The home must not be a mere efficient machine,” Frank once said. “It must offer comfort, rest and coziness…. There are no puritan principles in good interior decoration.”

H 18.12 in. W 74.02 in. D 33.08 in.
Mid Century Danish Stool in Oak and Reupholstered in Lambswool, ca 1960s
Located in Odense, DK
Danish modern stool in oak, reupholstered in long haired lambs wool. Made in ca 1960s. A great object for the Scandinavian interior home. The overall impression is really good.
Category

H 19.3 in. Dm 14.97 in.
Pair of Art Deco Stools, Original Upholstery, Danish Cabinetmaker, 1930s
Located in Odense, DK
A rare and glamorous pair of Art Deco stools in original fabric. Made by a Danish cabinetmaker in 1930s. These nice vintage stools will fit in many interior styles. A modern, Sca...
Category

H 19.3 in. Dm 10.24 in.
Tripod Stool in Solid Beech Wood, by Danish Cabinetmaker, Mid Century, Ca 1960s
By Mogens Lassen
Located in Odense, DK
Fine patinated vintage tripod stool in solid beech. Made by an unknown Danish Cabinetmaker in 1960s. Made in the style of Mogens Lassen, This modern stool will fit in many types o...
Category

H 17.33 in. W 15.36 in. D 11.03 in.
Pair of Danish Curved Art Deco Lounge Chairs, Reupholstered, Made in 1940s
By Fritz Hansen
Located in Odense, DK
Beautiful pair of Art Deco lounge chairs, reupholstered in plush an imitation of lambswool. Made by a Danish cabinetmaker, ca 1940s. A simple and refined design that will combine w...
Category

H 58.67 in. W 47.25 in. D 16.93 in.
Mahogany Cabinet by Josef Frank
By Josef Frank, Svenskt Tenn
Located in Stockholm, SE
Striking mahogany cabinet by Josef Frank. Boxy yet light design with a dramatic veneer pattern on the doors. Shelves can be pulled out at the bottom of the cabinet.
Category

H 55.12 in. W 43.31 in. D 16.54 in.
"Flora" Mahogany Cabinet Designed by Josef Frank for Svenskt Tenn, Sweden, 1951
By Josef Frank, Svenskt Tenn
Located in Stockholm, SE
Amazing “Flora” cabinet by Josef Frank, made from mahogany and decorated with antique prints cataloging flowers and plants. Beautiful patina. The design is originally from 1937, this...
Category

1stDibs Josef Frank cabinets are available for sale. These distinctive objects are often made of wood and designed with extraordinary care. In our Josef Frank collection, there are many options to choose from, although brown editions of this piece are particularly popular. In-stock we have 8 vintage editions of these items, while there is also 0 modern edition to choose from. Many of Josef Frank's original cabinets were created in the 20th century in Scandinavian modern style in Europe. If you are looking for additional options, many customers also consider cabinets by Otto Schultz, Svenskt Tenn and Carl Malmsten. Prices for Josef Frank cabinets can vary depending on size, time period and other attributes. Price for these items starts at $12,026 and tops out at $109,831, while pieces like these can sell for on average $49,695.