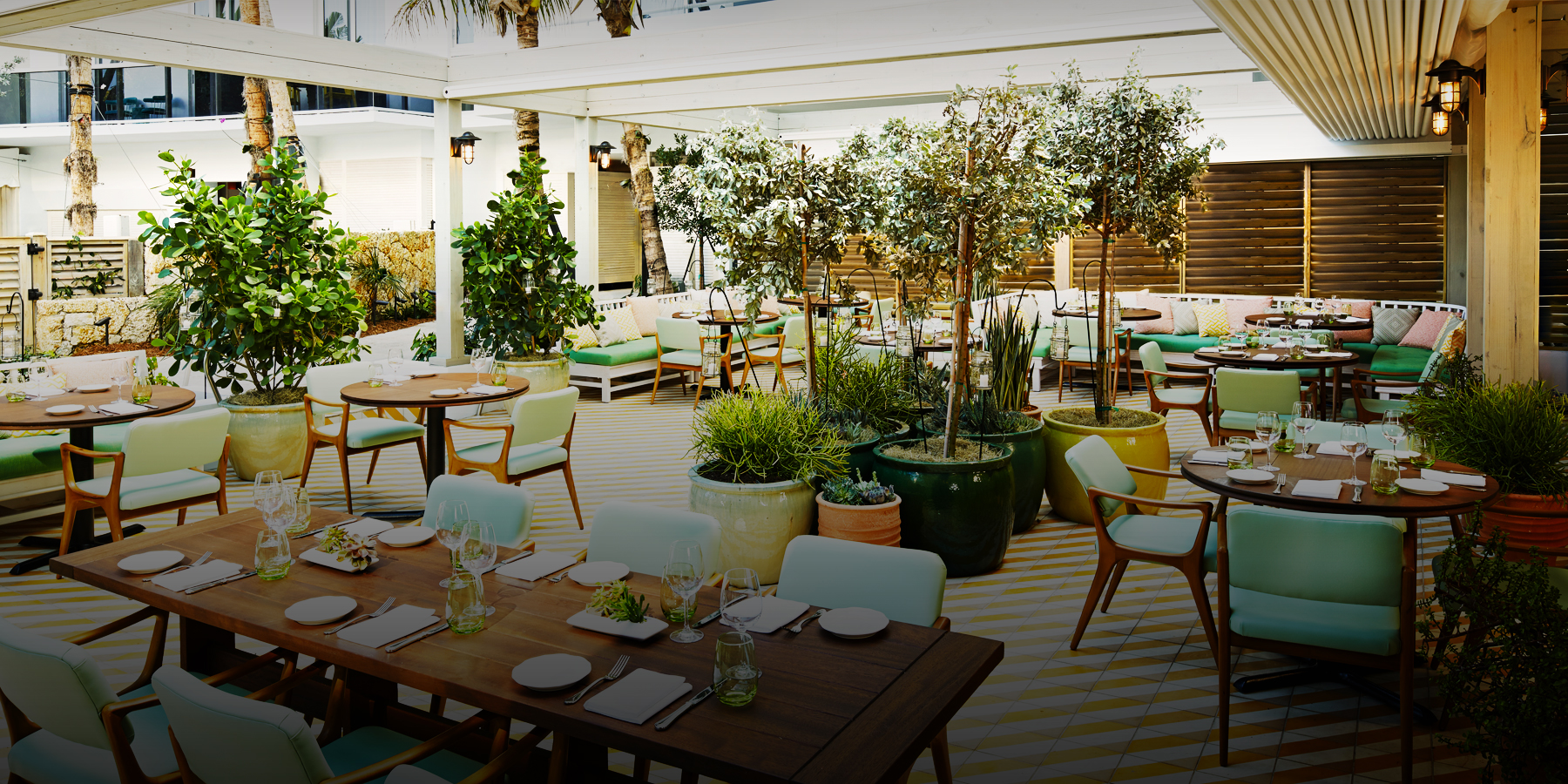 Opened only since November — just in time for Basel Week — the new surfside Thompson Miami Beach has reinvigorated a once relatively quiet stretch of Collins Avenue with its 1950s-inspired aesthetic, courtesy of London-based design star Martin Brudnizki. 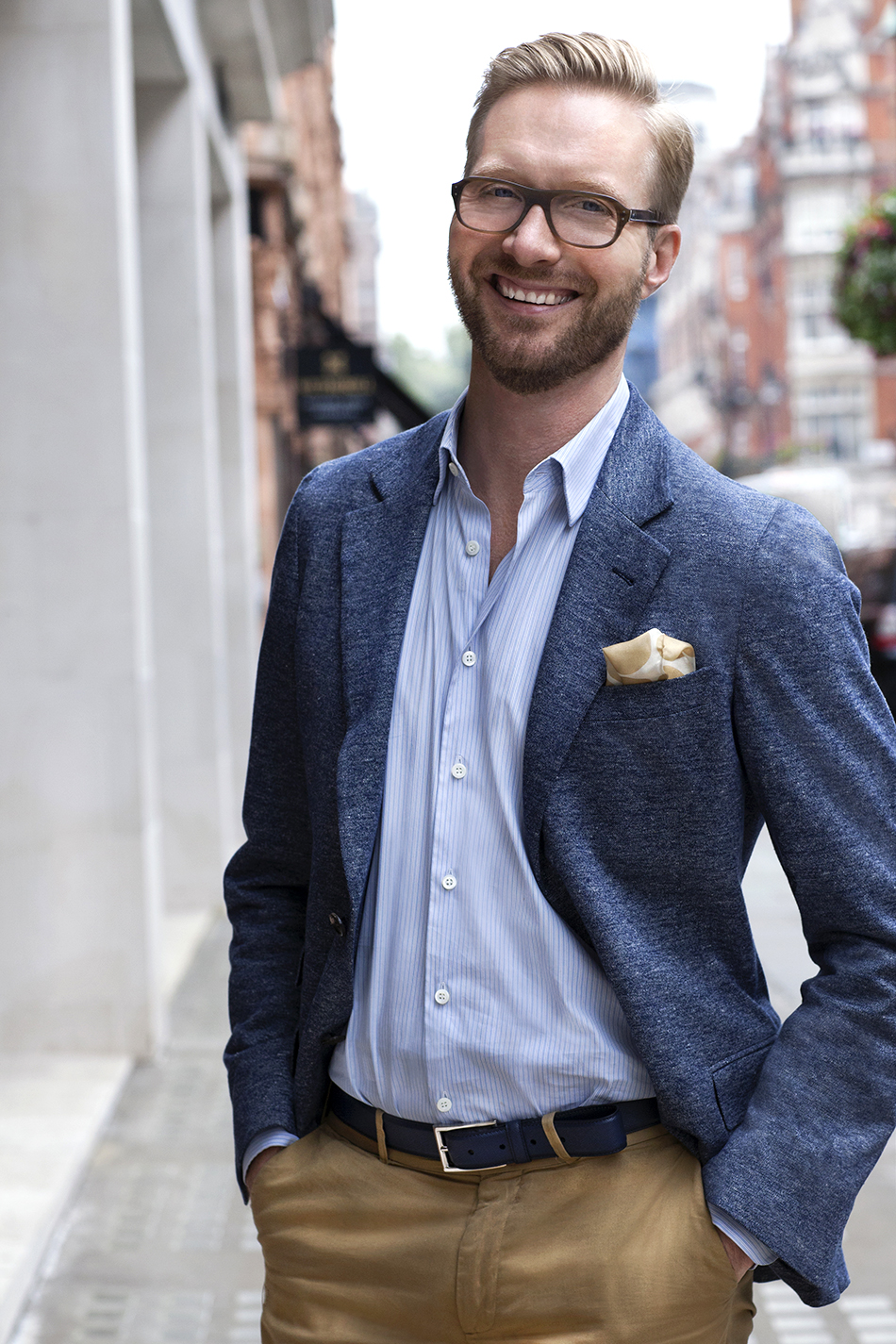 March 9, 2015Designer Martin Brudnizki created the mid-century–inspired schemes for the months-old Thompson Miami Beach (photo by Luca Marziale). Top: The shaded terrace of the hotel’s Seagrape restaurant takes the sea-foam hues of its interior outside. All images courtesy of Thompson Miami Beach unless otherwise noted

Since launching in New York’s Soho in 2001, Thompson Hotels has become known for creating hip, happening and always design-conscious boutique stays that are as sexy as they are sophisticated. Considered homes-away-from-home for Hollywood types, recording stars and the fashion-conscious, the properties in Chicago, London, Los Angeles, Manhattan and Toronto each have a distinct clubhouse atmosphere and style that celebrates their particular locations.

The most recent arrival, Thompson Miami Beach, takes the company’s concept to a seaside South Florida location, right on Collins Avenue, and in a more resort-like direction. The first Thompson to open since the original owners sold the brand a few years ago, the 380–room Miami outpost is also now the company’s largest. But that hasn’t stopped it from retaining an intimate feel and a focus on local flavor: City native and James Beard Foundation Award-winning chef Michelle Bernstein oversees the food; Junior & Hatter, one of the most sought-after hair stylists in town, launched a satellite salon at the 10th-floor rooftop spa; and master Miami mixologist Julio Cabrera crafted the cocktail list in the hotel’s book-lined lounge known as Crown Room.

The real star, though, is the hotel’s playful, 1950s-inspired aesthetic, created by London-based Swedish design darling Martin Brudnizki, whose New York studio took on this project. Known for his eclectic, cinematic spaces — and for partnering with such chic clubs as Soho House (he did the Miami outpost) and Annabel’s, in London, as well as star chefs including Mark Hix, Nobu Matsuhisa and Jamie Oliver — Brudnizki here created a series of set-like spaces in Miami, many featuring his signature statement-making light fixtures, and all with furnishings both vintage and of his own design. 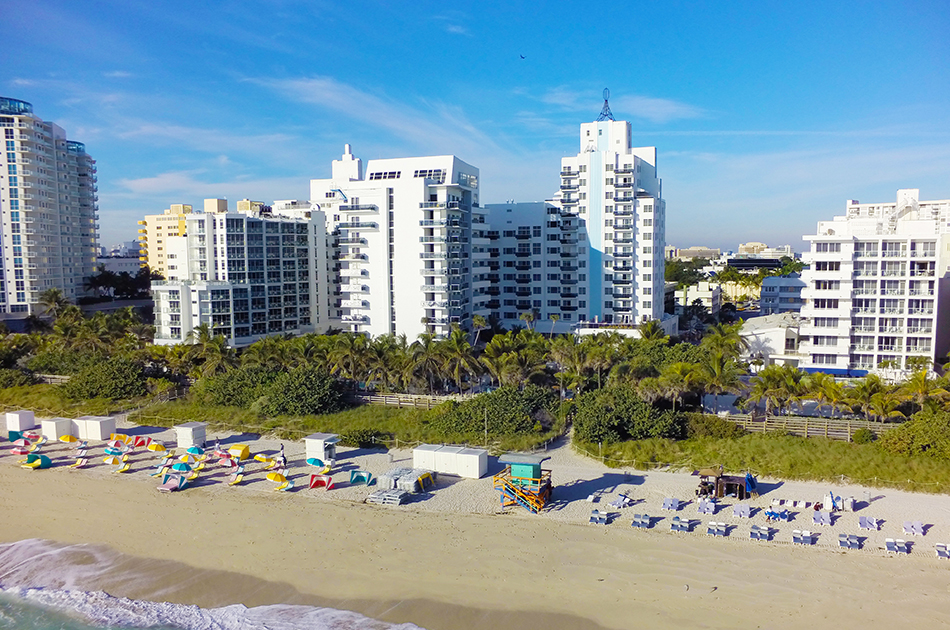 The hotel combines three structures — one Art Deco, one Miami Mod and one from the 21st century — all set between Collins Avenue and the beach. 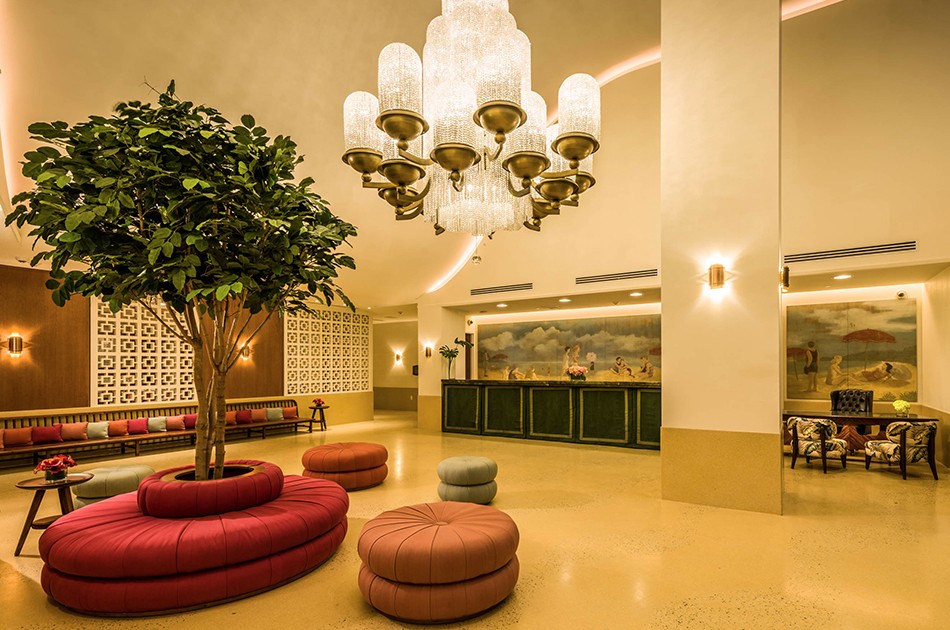 Brudnizki designed the dramatic crystal chandelier that hangs from the curved ceiling of the hotel’s lobby. For the artwork behind the reception desk, he commissioned Los Angeles artist Paulin Paris to create a mural depicting a 1930s beach scene. 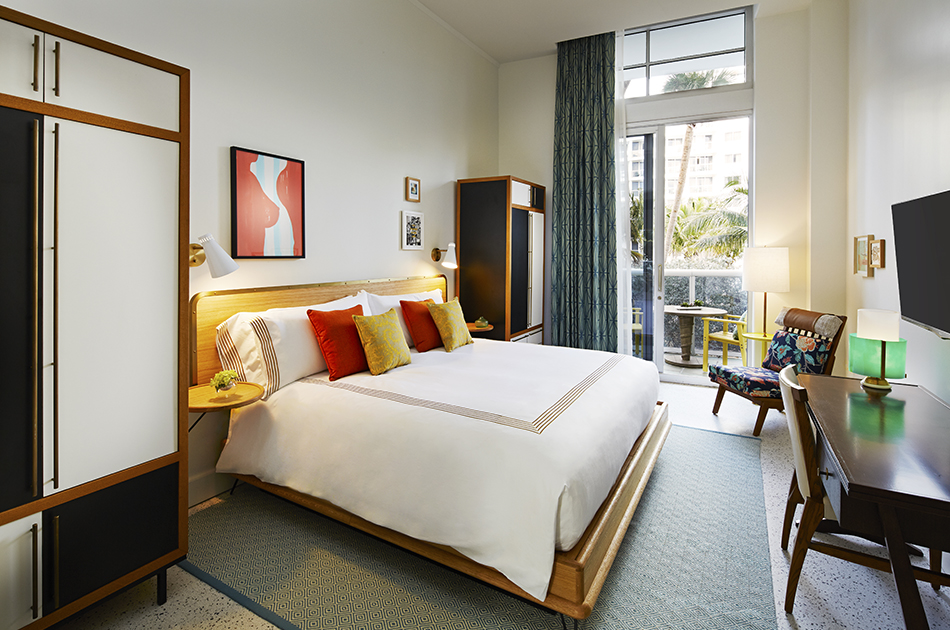 The guest rooms at the hotel combine mid-century-inspired pieces of Brudnizki’s own design with graphic prints and pops of color. 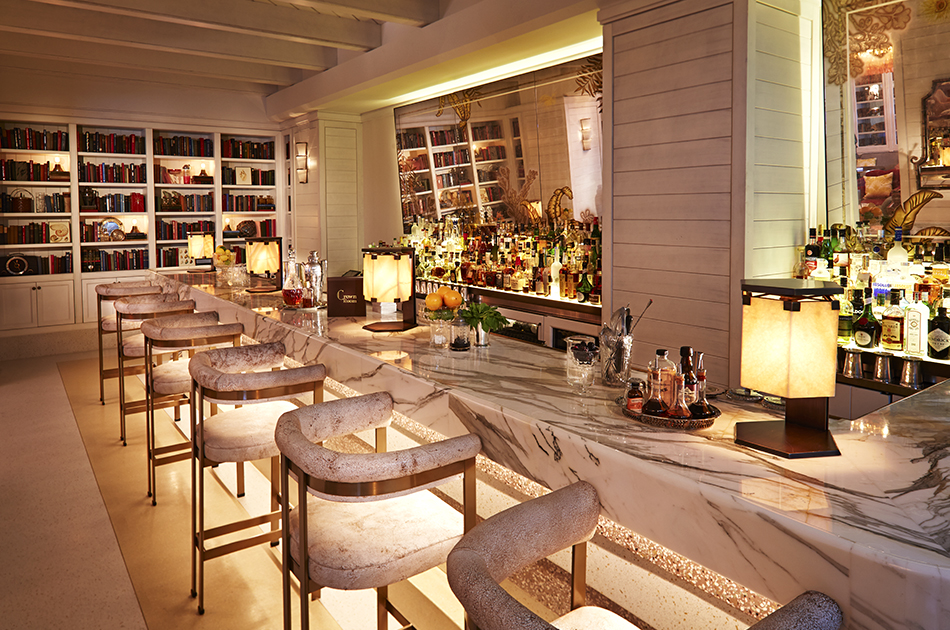 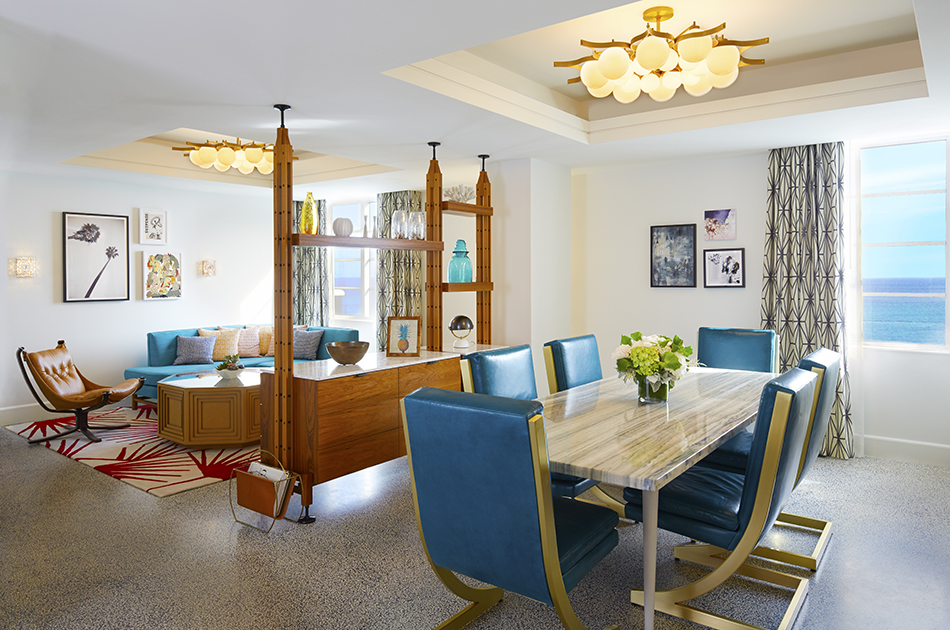 The penthouse at the hotel has a particularly residential feeling, with its own spacious dining and living areas separated by a credenza-cum-room divider designed by Brudnizki’s studio. 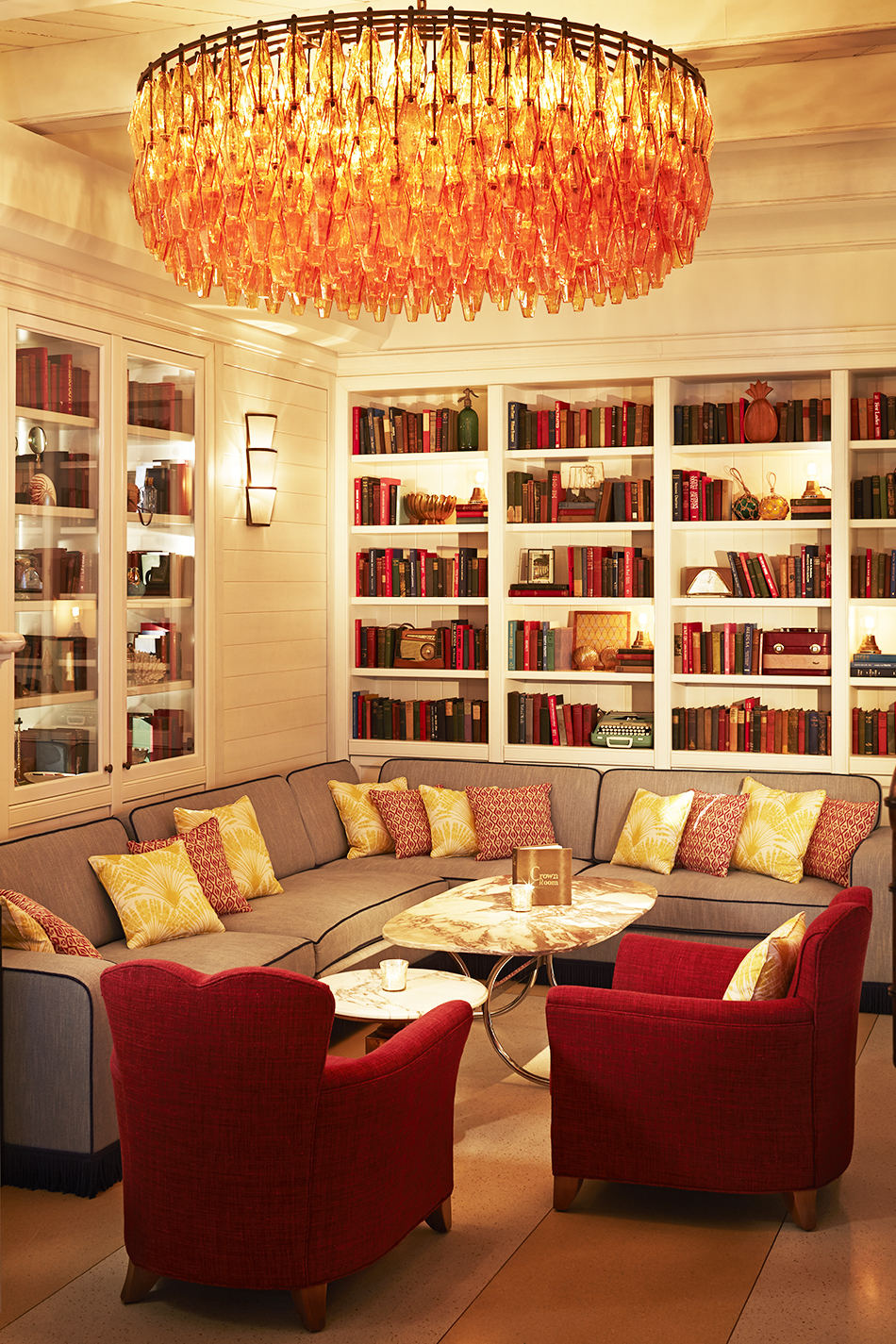 A book-lined nook of the hotel’s beachy yet library-like lounge and cocktail bar, the Crown Room, features amber-hued chandeliers of Brudnizki’s own design.

Each of his mid-century–inspired schemes here, whether indoors or out, lets you role-play to your heart’s delight. In the library-style Crown Room or Spanish Colonial 1930s House — which previous owners moved from across Collins Avenue into the hotel’s courtyard and now serves as a bar — you’re Hemingway in Havana, sipping a daiquiri or whiskey. At Bernstein’s Floridian seafood brasserie, Seagrape, with its lounge-y, low-slung banquettes and sea-foam hues — you’re Frank Sinatra or Dean Martin after a show, tucking into crispy snapper. By the two lushly landscaped pools (Raymond Jungles, the aptly named, award-winning landscape designer, helped with the green spaces), you’re Rita Hayworth, relaxing beneath canvas umbrellas in sherbet-colored stripes. And in the light-filled guest rooms and suites, whose graphically patterned curtains and carpets call to mind David Hicks, you’re Rock Hudson or Doris Day, deftly mixing drinks at the bar-cart minibar.

Here, Brudnizki lets us in on the thought-process behind his scheme.

We had to reconfigure three existing buildings, from three different periods — one part Art Deco, one part Miami Modernism and one part 21st-century design — into a single cohesive space, which needed to look seamless. As a result, the interior is truly postmodern and reflects the rich architectural history of the building.

“We wanted to re-establish a sense of the beach glamour of the 1940s, ’50s and ’60s to create a hotel for the artistic crowd who are drawn to the city’s new Golden Age.” 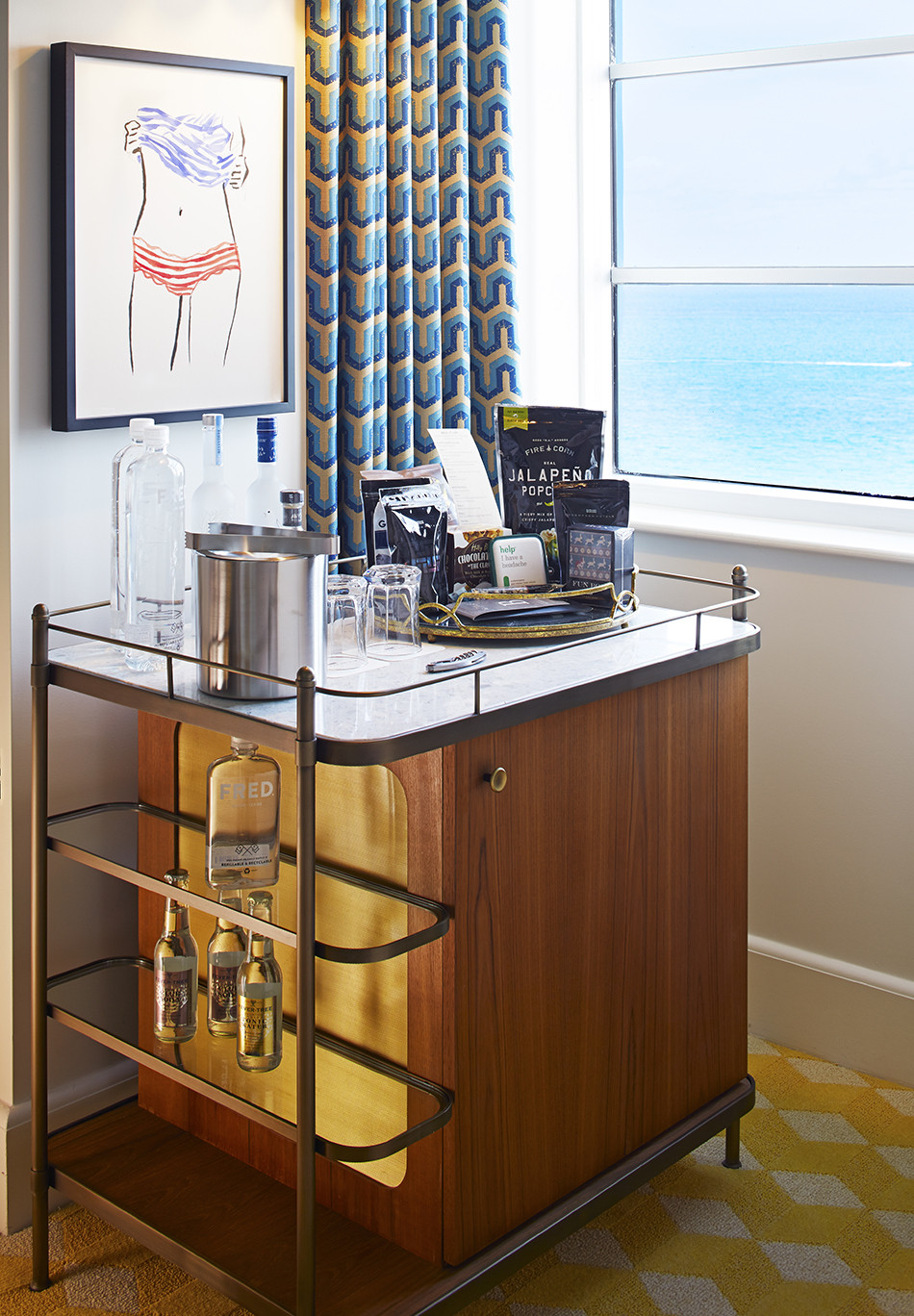 In every guest room, the minibar takes the form of a Don Draper–worthy bar cart.

Miami itself was a huge source of inspiration for the design process, as the hotel takes influences from the mid-century resort style of the city’s heyday and fuses this with the texture, color and comfort of the tropics.

We wanted to re-establish a sense of the beach glamour of the 1940s, ’50s and ’60s to create a hotel for the artistic crowd who are drawn to the city’s new Golden Age.

The 1950s concept really set the palette, so we went with a lot of playful and stylish colors, with yellows featuring quite strongly in the guest rooms and greens in the restaurant space. The materials we used were also influenced by our postmodern approach to the design, with modernist concrete breezeblock walls in the lobby and hacienda-style flooring in the 1930s House.

Combining the spirit of Miami Beach and the Art Deco style of its architecture, we commissioned a Los Angeles artist, Paulin Paris, to create a mural of a 1930s beach scene in the lobby. It embodies Miami in that it evokes the Art Deco glamour of the city while at the same time depicting the iconic stretch of sand the city is famous for.

We designed rooms and public areas with mid-century accents and furniture that we acquired at auctions and markets in England and the States as well as on 1stdibs and mixed these with new custom-made or bespoke pieces.

The pair of 1940s curved and tufted club chairs we’ve used in the bar lounge at Seagrape are playful and full of character with barkcloth seat cushions. They were acquired through 1stdibs, from Regan & Smith Antiques, located in Hudson, New York. The chairs were then re-upholstered locally in Miami. 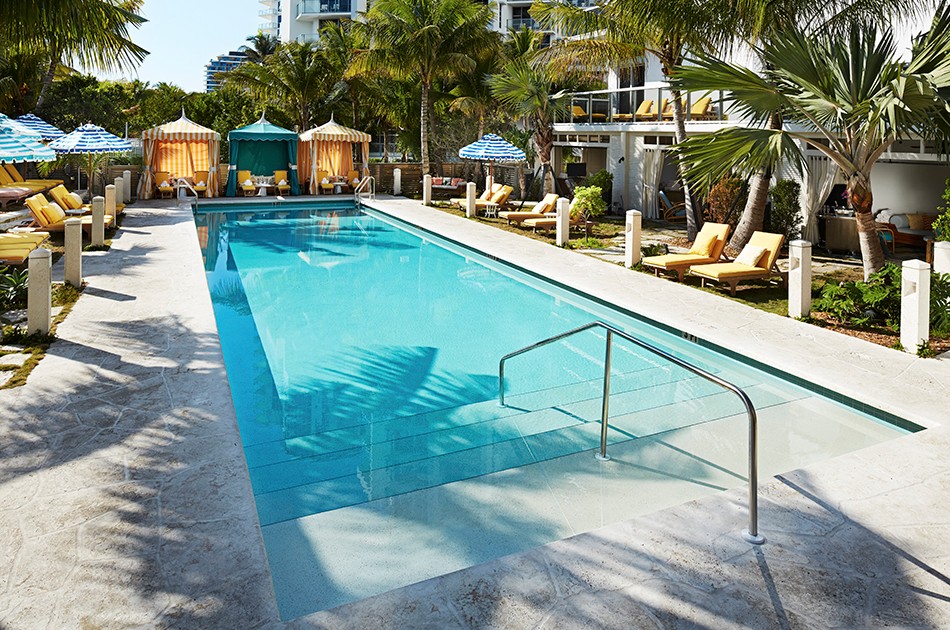 Brudnizki selected a range of sorbet hues for the chaise lounges, cabanas and white-striped umbrellas surrounding the Thompson’s pools. 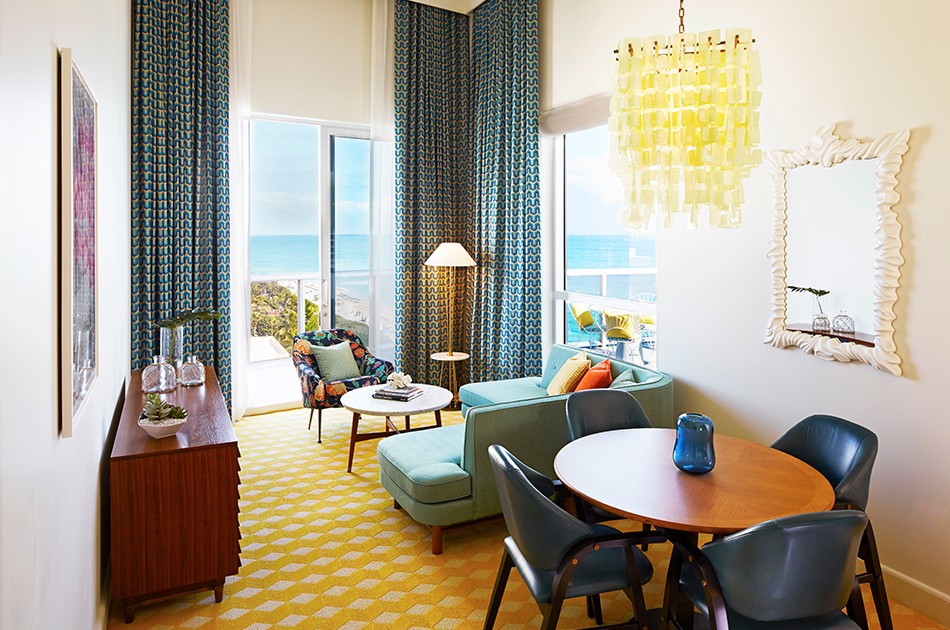 The brightly hued living area of an Ocean Suite does a particularly fine job of showing off the graphic, David Hicksian prints of Brudnizki’s playful design. 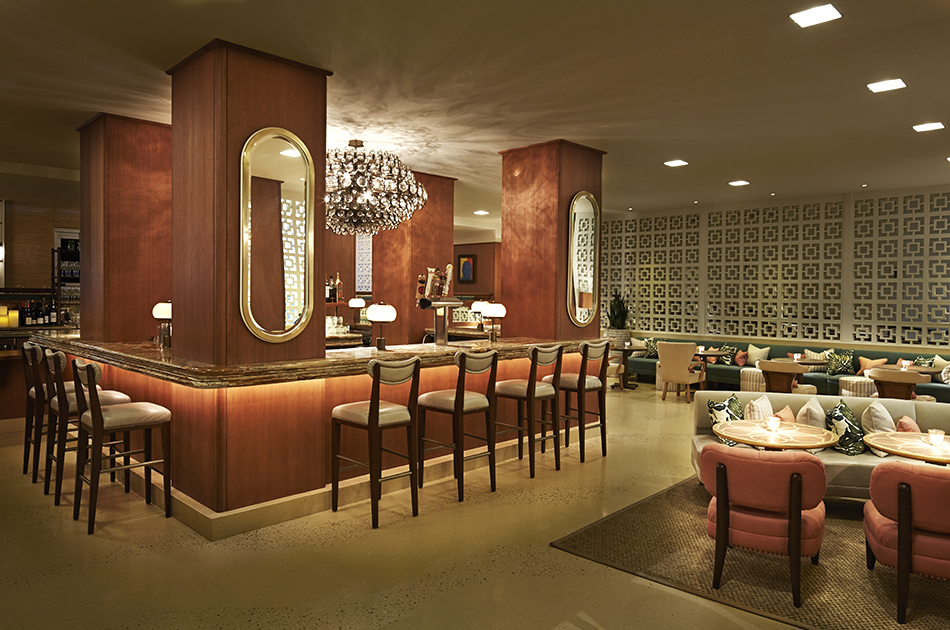 Brudnizki sourced the curved and tufted club chairs for the Seagrape bar (seen at right, from the back) from Regan & Smith Antiques, in Hudson, New York. 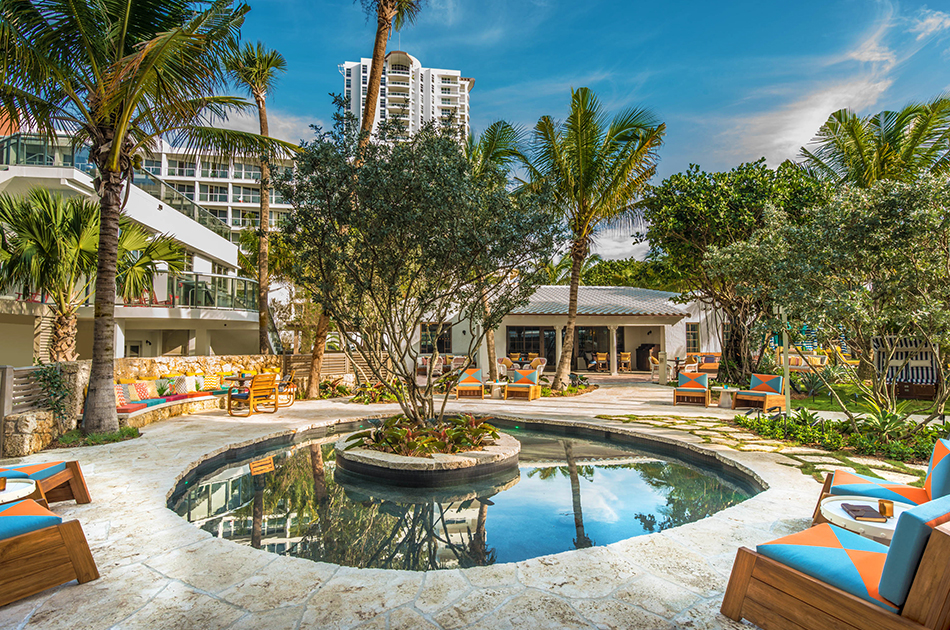 In-demand landscape designer Raymond Jungles handled the layout and plantings of the hotel’s palm-planted courtyard. The exterior of 1930s House can be seen in the background. 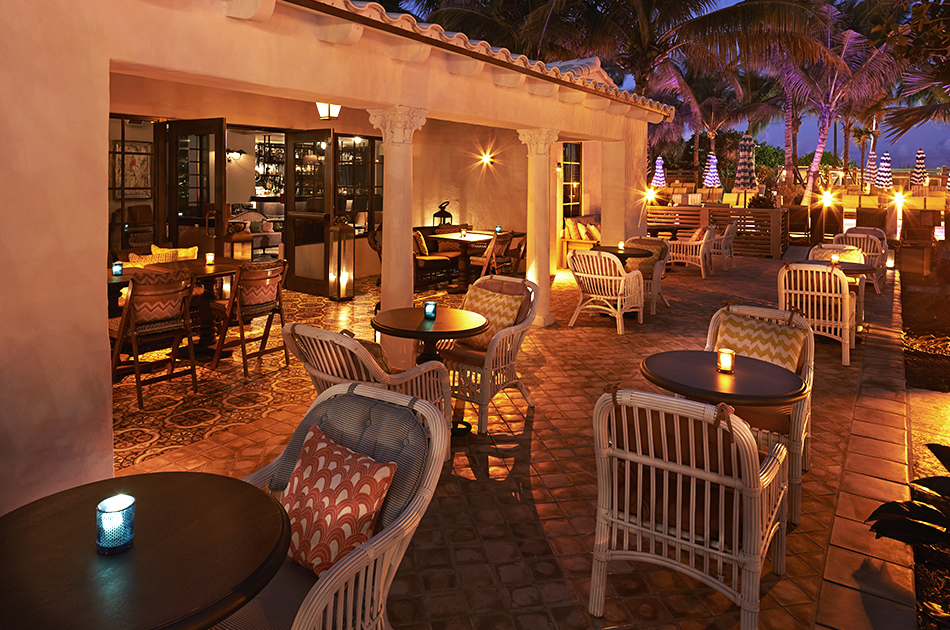 The 1930s House bar and lounge repurposes a Spanish Revival–style home that was moved to the property’s courtyard from across Collins Avenue by the hotel’s previous owners, who’d used it as a fitness center. 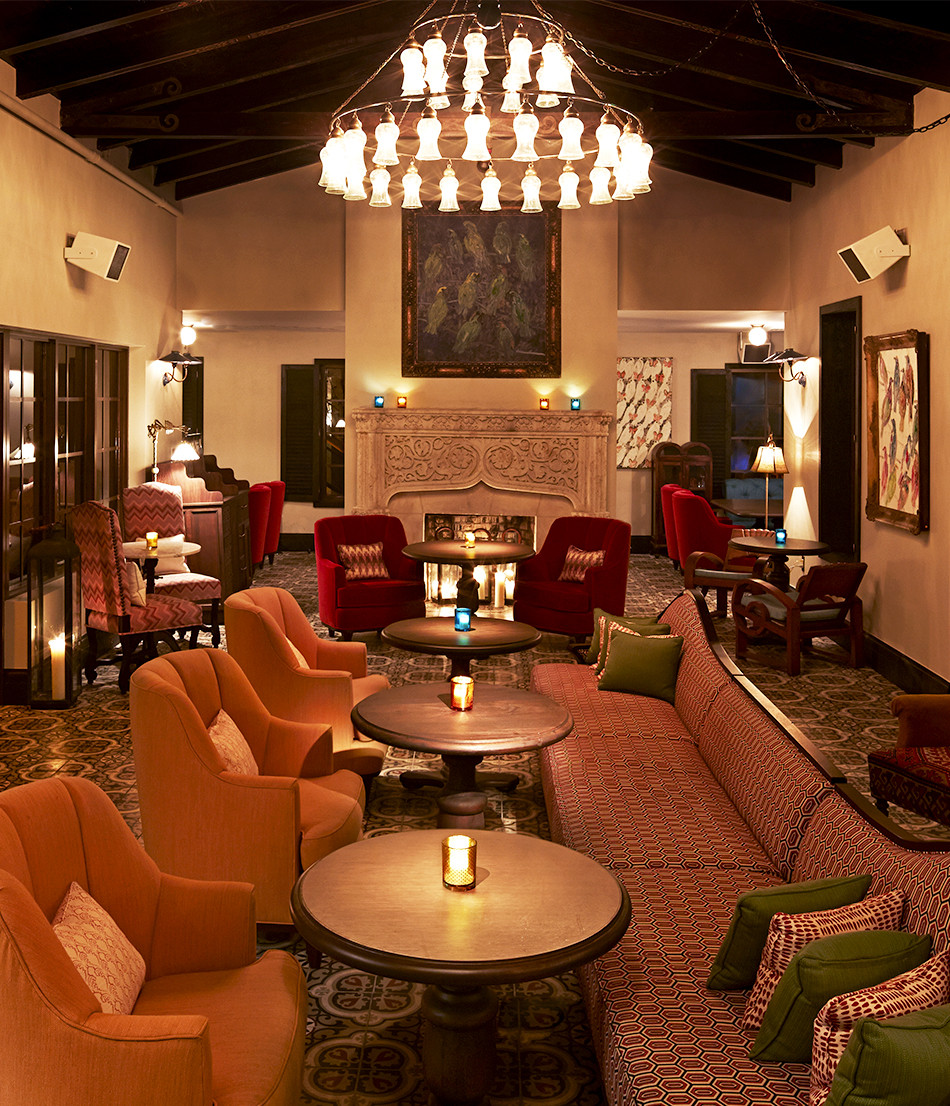 For the interior of the 1930s House, Brudnizki found inspiration in the building’s original Spanish Revival bones. The bird paintings on the walls are by Hunt Slonem, whose work adorns the public spaces throughout the hotel.

The artwork is really rather impressive and unusual as we’ve mixed lots of different mediums, from photography to paintings and prints. Highlights for me are the paintings by artist Hunt Slonem in Seagrape.

The chandelier in the lobby is beautiful. It’s a large classic mid-century–inspired piece with cascading glass that creates a dramatic first impression, especially when set against the wave-shaped portico. It was designed by our studio and then made in Los Angeles.

The 1930s House. It isn’t every day you find a Spanish Revival home from Collins Avenue that’s been moved into the courtyard of a hotel’s grounds. We used it to create a kind of Ernest Hemingway–style drinking den, complete with crudo bar. It’s quite a big one, as drinking dens go, but it’s incredibly unique. 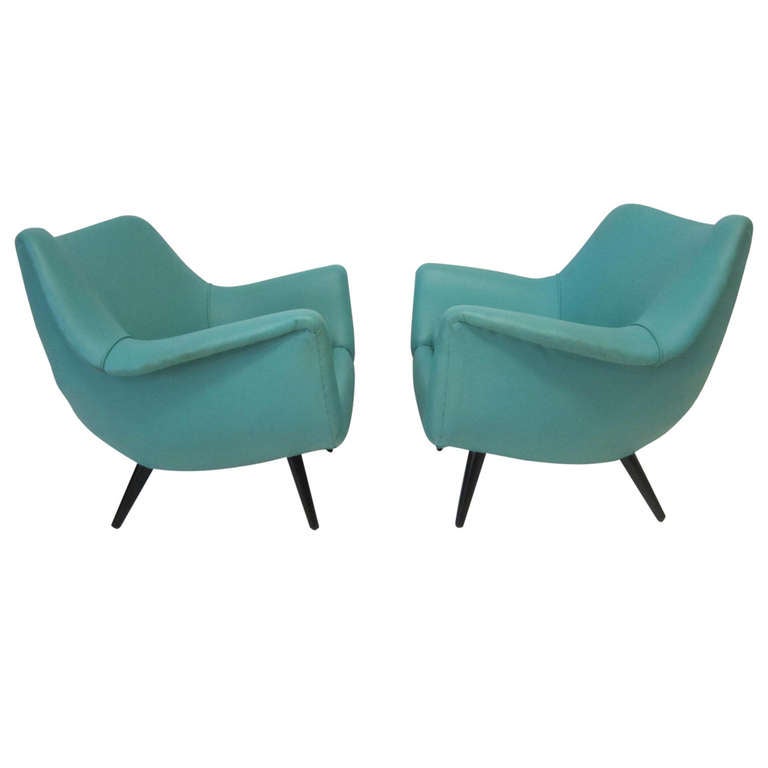 “These scoop lounge chairs are the perfect shape with their ebonized wooden legs. The turquoise leather is durable and makes a statement.” 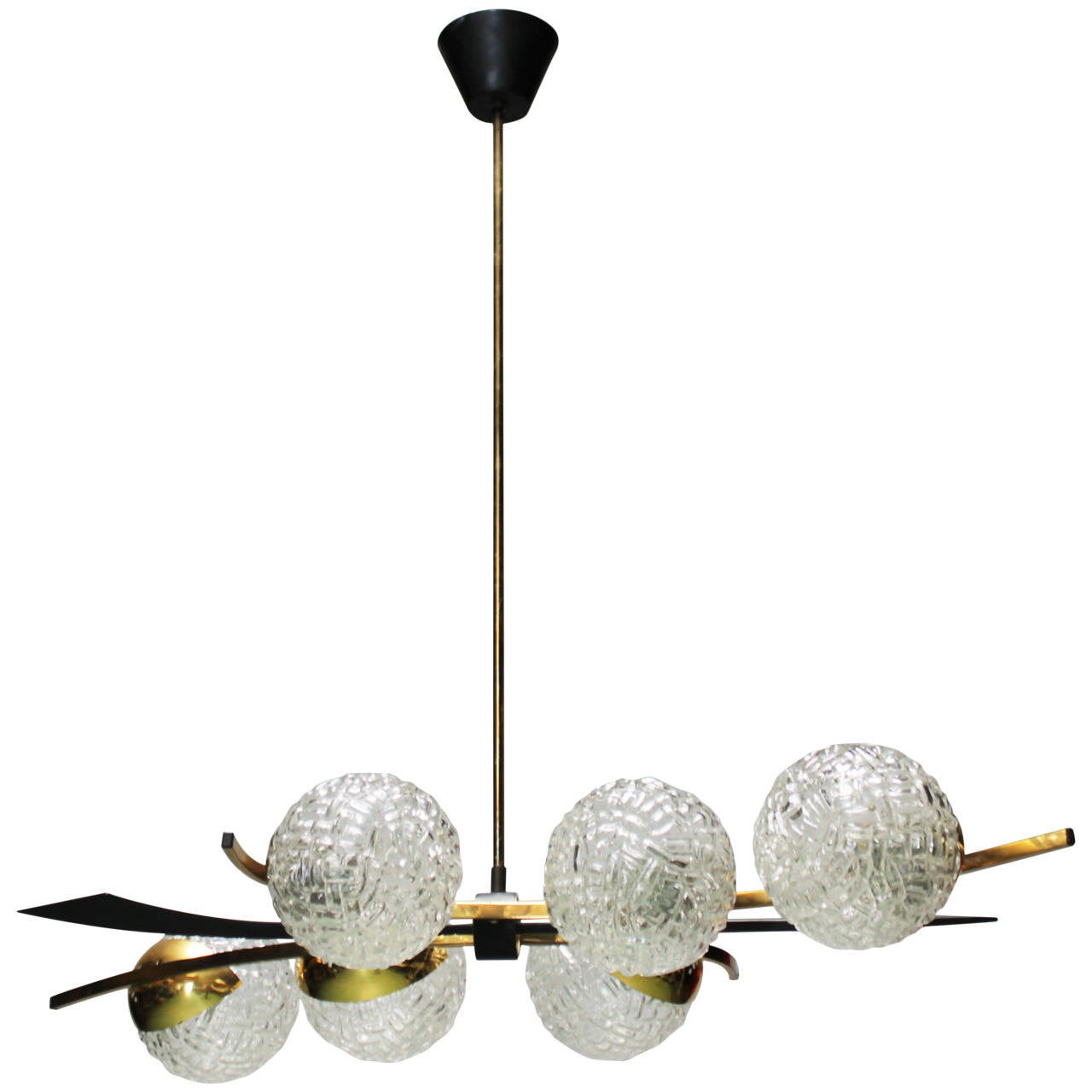 Shop Now
Pendant Light in the Style of Stilnovo

“Pendant lighting is a great way of adding depth and detail to a space. This one, with its glass and brass burners, is in keeping with the eclectic aesthetic and quality found throughout the hotel.” 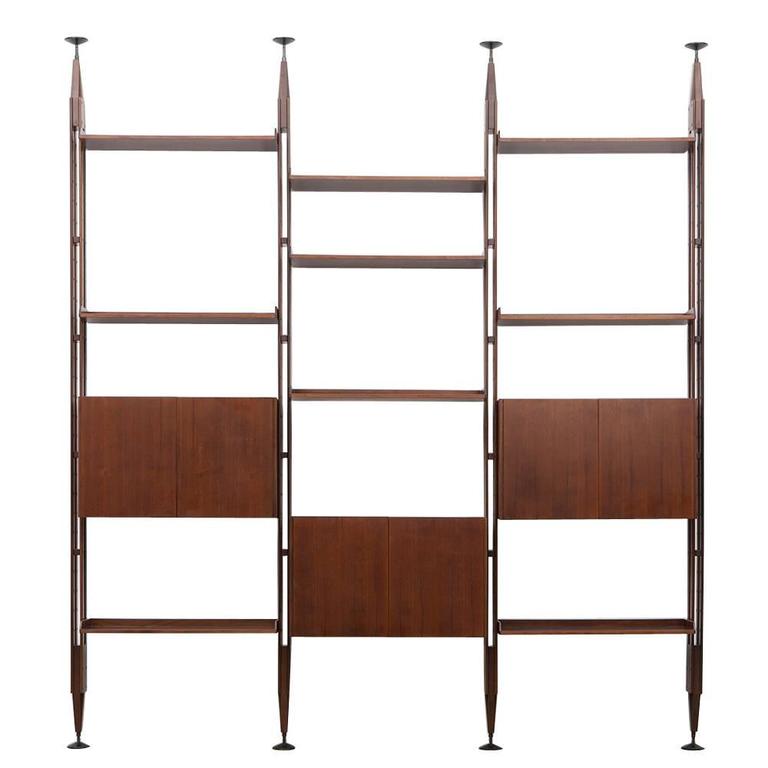 “This stand-alone library fixture works well as an attractive center point for the room, as well as being practical, housing books and objects while acting as a room divider. It can transform a large space into two smaller ones effortlessly.” 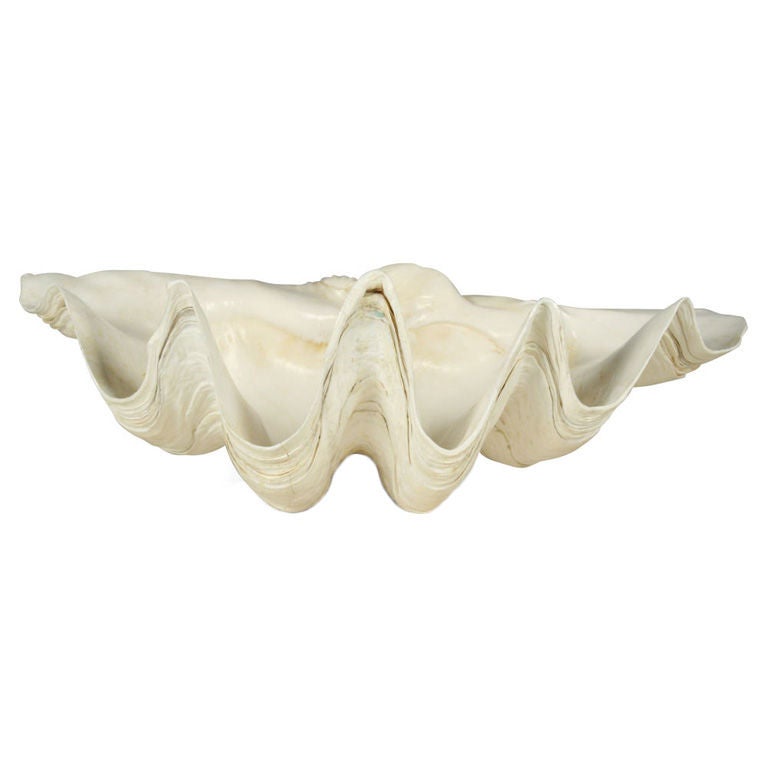 “The hotel’s focal point is that it’s so close to the beach and we wanted to reflect that in the décor. We chose to do this subtly with the furniture and color palette, but the addition of some fun, kitschy pieces would add to the playfulness of the space.” “We used gold and brass metallics in each room of the hotel; these materials add an understated grandeur.This floor lamp would be great as a stand-alone piece.” “Tables with glass are often an elegant alternative and naturally add space to a room. The brass base on this one gives it a sense of monumentality while the glass adds a touch of modernity.” 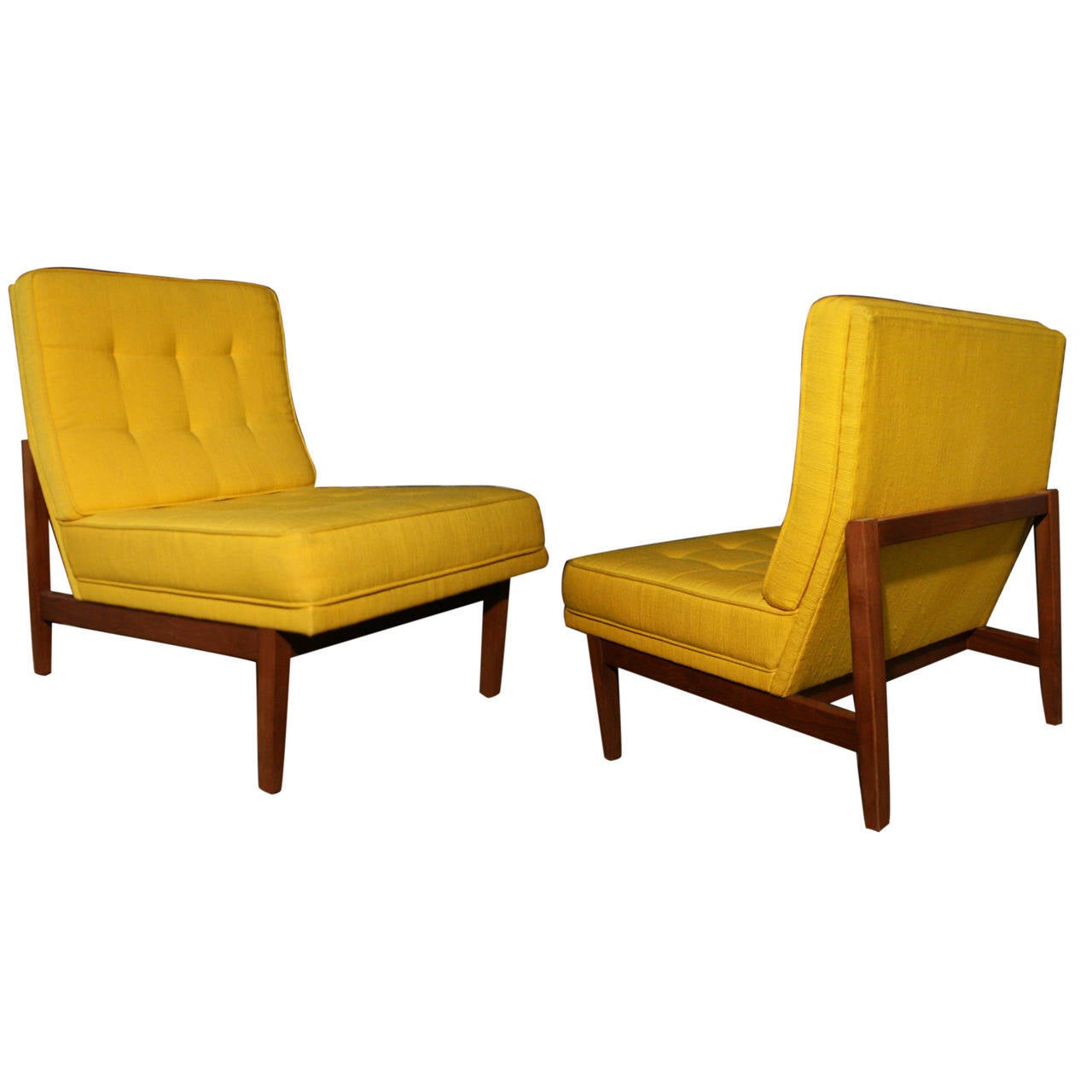 “The dark wood detail and vibrant yellow are reminiscent of the 1960s yet the armless style keeps it modern and chic. These would be a great addition to any bedroom or living room, adding a pop of color.” 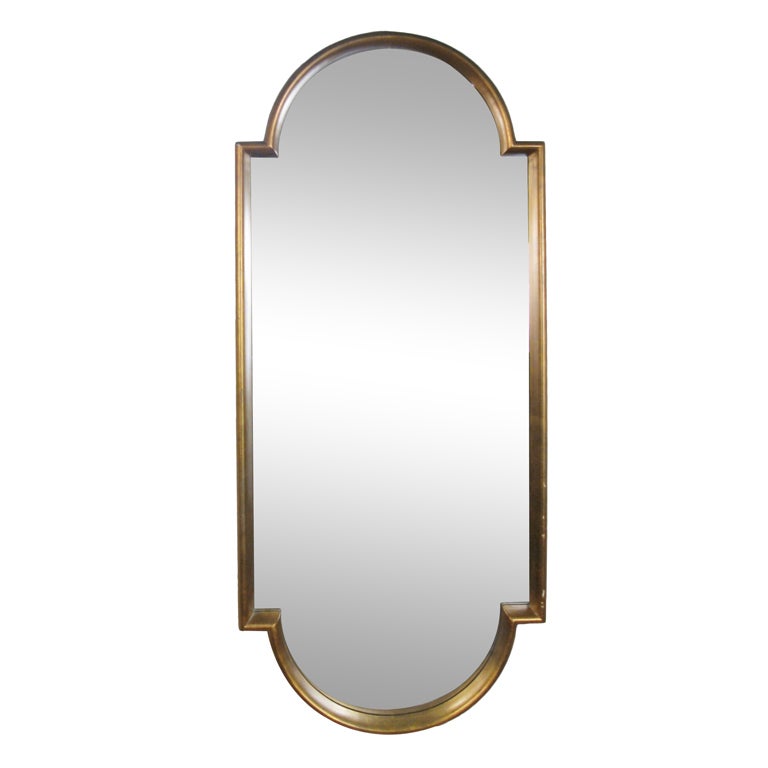 “Mirrors are an absolute essential in any hotel room and must be in keeping with everything from the chairs to the wallpaper. This gold-leaf style is minimal and elegant.” 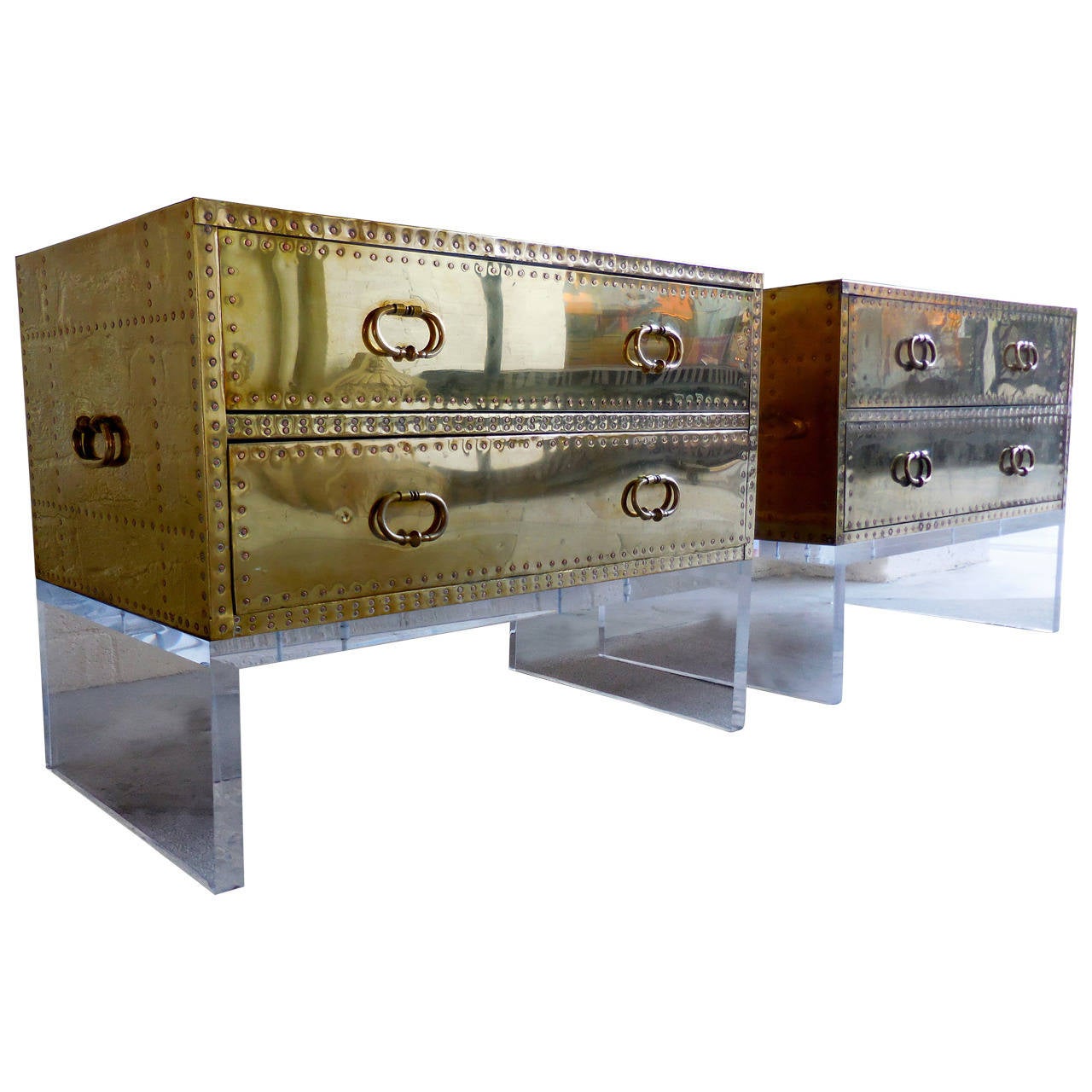 “You don’t have to limit the use of brass or metal to just accessories; these drawers have each been hand-polished to give them warmth while remaining glamorous. So they’re a focal point alongside being practical.”