What Women NFT Artists Are Making in the Metaverse

Thirteen female creators explore the roles of identity and self in our latest NFT exhibition.

March 27, 2022Listening to Sparrow Read, a software engineer turned crypto artist based in Winchester, England, as she discusses the tools of her trade is an education in digital creativity. “I use GAN art, and I started with Artbreeder, then I moved to RunwayML. I run Linux on my laptop, so the open-source software I use to create a glitch effect is either Blender or Gimp,” she says, reeling off a list of apparently well-known tech touchstones.

Read also has an analog practice, specializing in the complicated technique of encaustic wax painting. “What can I say, I’m definitely drawn to things that are challenging!” she explains, laughing. The artist, who goes by the creative name of blackboxdotart, is clearly in her element exploring new digital systems of production. These, for clarification, mostly use machine learning (GAN, short for generative adversarial network, is one such framework) to influence her final images, some of which are still, while others are animated using motion graphics.

Her love of experimentation is telling of the eclectic nature of her work, ranging from intensely colored frames of jolted abstract forms to figurative silhouettes assembled from distorted shapes. She also dabbles in interactive architecture inspired by virtual-reality gaming. And, in case you are wondering, a “glitch effect” is achieved by running an image through a specialized app, resulting in a still of a moving graphic file that looks strangely manipulated or corrupted.

Read’s immersion in different production methods is also telling of her unbridled approach to the digital universe. In fact, having endless possibilities or crypto art “kits” at her fingertips is exactly what drew her to NFTs. “You can spend decades exploring the digital arts and still only be competent in a very small subset,” she explains. “The fact that I could go on and on for the rest of my life and still have areas to explore — well, I find that very appealing.”

For Read, the ability to build her own “system of expression” is both empowering and revelatory. That is why she has curated on 1stDibs an NFT exhibition and auction, titled “IDentity: (Self)-Made by Women,” exploring the relationship among identity, the hand of the artist and the transmutable nature of digital data through her own work and that of a dozen other female creatives: Amy Robson, Ina Vare, Karen Frances Eng, Vanesa Stati, Sophie Sturdevant, Angie Taylor, Gisel Florez, Marjan Moghaddam, Serste, Isa Kost, Stina Jones and Chris Kore.

“The idea that we can shape our own world and create our own version of the ‘self’ through NFTs was one of the most attractive things about crypto art for me. The breadth and depth of what women in this space are creating — from hand-drawn digital paintings to immersive three-D sculptures to videos — really floors me,” Read says. “There is something about forging your identity through your own unique expression that to me feels so strong from female artists right now.”

She gave her chosen artists a broad remit to explore the many implications of the word identity. “Some creatives, such as Stina Jones and Ina Vare, have explored hugely layered expressions of self,” she says, “while others, including Angie Taylor and Serste, have looked at the identity that society imposes upon us.”

Read’s own motion-led figurative pieces have a dark fairy-tale quality, with statuesque females set against quivering mythical landscapes. They’re at once ethereal and unsettling, as if something portentous is about to occur. “I’ve looked at identity in very Jungian terms, as separated between the psychological self and the shadow self,” she explains.

Indeed, the suspense with which she imbues her work could be a metaphor for the dramatic shift in creative thinking that has opened up, thanks to NFTs and technology as a whole. “Many crypto artists originally turned to this medium because they felt at odds with the traditional art world,” Read notes. “They therefore built their own system and nurtured their own communities. This is one of the strengths that I wanted to highlight in this exhibition — that all the women are very much self-made.”

Her sentiment is echoed by British artist Angie Taylor. “Crypto art feels like a way to bypass the normal constraints of the traditional art world by giving me the ability to exhibit where I want more easily, without having to be part of an elite group. I can also curate my own exhibitions and events, which is not so easy for me to do in real life,” she says. “Of course, the biggest advantage is that now digital art can have the value that it so deserves.”

Taylor has rebranded the metaverse as the “subverse” in a rejection of what she sees as the “attempted monopoly” of this space by Meta, the corporation formerly called Facebook. A pinch of this rebellious streak is seen in Identity, 2022, her figurative piece for this exhibition, which was inspired by a song of the same name written by Poly Styrene, of the punk band X-Ray Spex, in the 1970s.

The work depicts a punk rocker with spiky hair and multiple piercings standing before a bathroom mirror wearing just a bra. Her skin is blotched in multiple hues and its surface looks almost like cooling lava.

“My character was sculpted from digital clay,” Taylor says of her NFT. “I like to leave the imperfections of the modeling on the sculpture, like a wood carver leaves the marks of the chisel. This imperfect, odd character is placed within a perfectly clean, shiny bathroom, but she cannot bear to watch herself in the mirror, and her own self-doubt makes her smash the glass with her phone, so she no longer has to look at her reflection. It presents identity and self-expression as the struggle between the real you and the projected you.”

Perhaps self-making in the virtual world can help diminish this kind of inner conflict or at least provide a more flexible environment in which to be more at one with oneself. Latvian artist Ina Vare seems to think so.

“Never in my life, have I felt as free in my expression as I am feeling now in the crypto space,” she proclaims. Her NFTs for “IDentity” are highly personal windows into her world, equating identity with a sense of belonging.

“I have expressed my deep connection with nature and the place where I was born,” she says of her video works. “I am identifying myself with the sun shimmering on the surface of the Baltic Sea and the reeds moving in the light breeze. I feel these things are a huge part of me, so I blended myself quite literally together with them.”

For Italian digital artist Isa Kost, NFT technology has provided a way to hone her aesthetic, which has a strong graphic look, often inspired by nature sketches and anatomical studies.

“Just as with music, if you have an amplifier, you can increase the output and enjoy listening to it more, NFTs are a channel into which I can hook my artistic ‘plug’ and amplify my exploration and research of movement, details and layers,” she explains, adding that her art allows to step out of her comfort zone. “It is necessary each time to dive into my depths, to find something unknown that can trigger the story. The confidence of being in the deep dark, the feeling of being lost and having to hold my breath for the dive is my way of making some aspects of my ‘self’ visible.”

British crypto artist and writer Karen Frances Eng, who sometimes works under the name oculardelusion, delights in the most meta of metaphors in her work Do Androids Dream of Electric Kool-Aid, which she describes as a “snapshot of the self in 2022.”

“The name is a mash-up of the title of Philip K. Dick’s short story “Do Androids Dream of Electric Sheep?,” on which the film Blade Runner was based, and The Electric Kool-Aid Acid Test, the Tom Wolfe book about countercultural psychedelic pioneers of the beat and hippie generations,” Eng says, citing two cult classics regarded by many as archetypes of philosophical thinking about how we define reality and where technology and escapism sit within it.

“My experience with life in the cryptoverse has opened my eyes to how quickly the mind can adapt to new, novel and even seemingly impossible situations — to pure imagination,” she notes.

Like a lot of NFT artists, Eng sees the self that lives in the metaverse as more powerful, connected and creative than the one that resides on our conventional plane of existence.

“This piece is about my willingness to surrender to the forces of technology. Why do I allow it? I want the novel experiences, the glow of communities I can’t access any other way, the tools to make much more than I could with anything I’ve ever had access to before,” she says. “I sometimes feel I am losing touch with my corporeal self. The surprise is, I seem to be OK with that.” 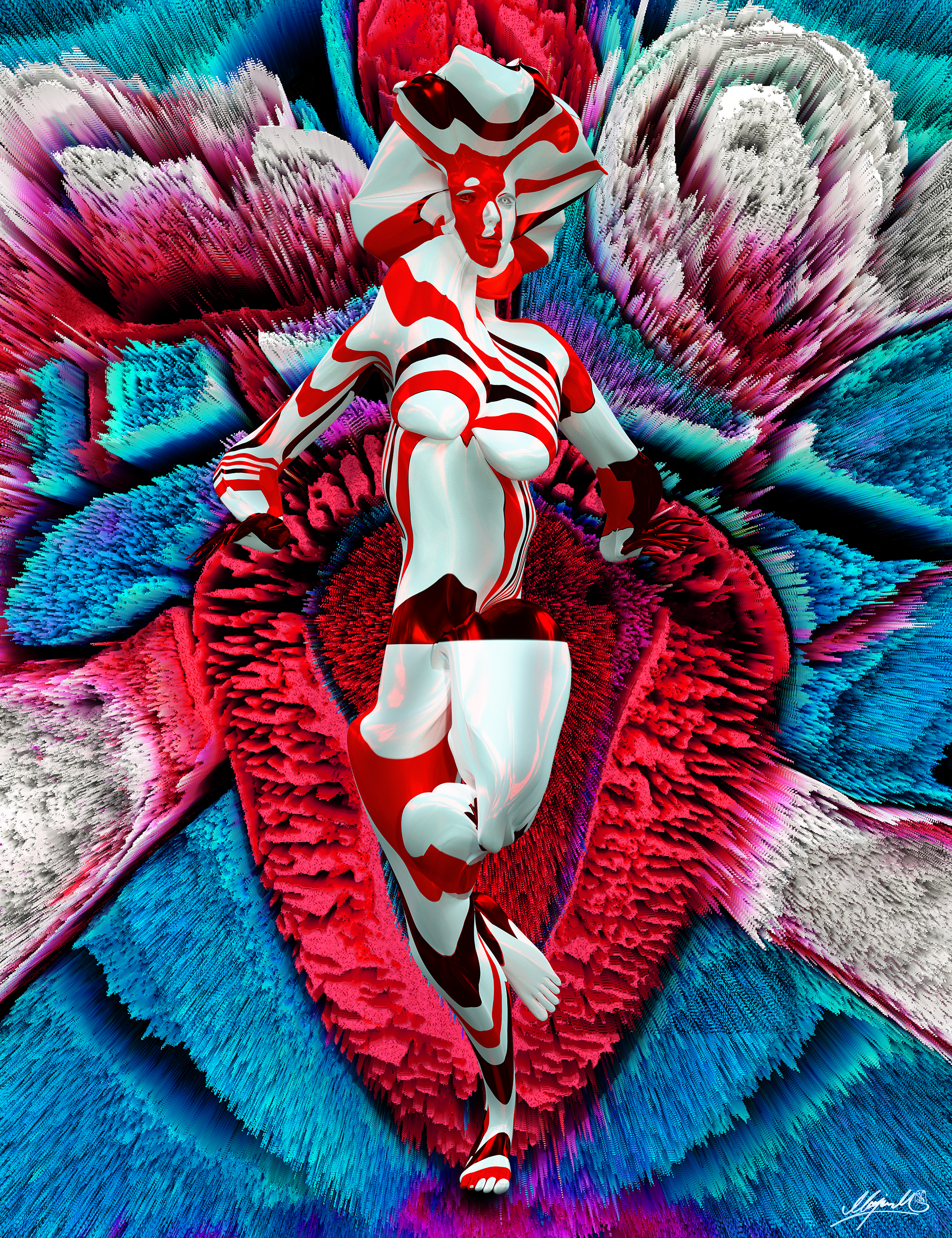