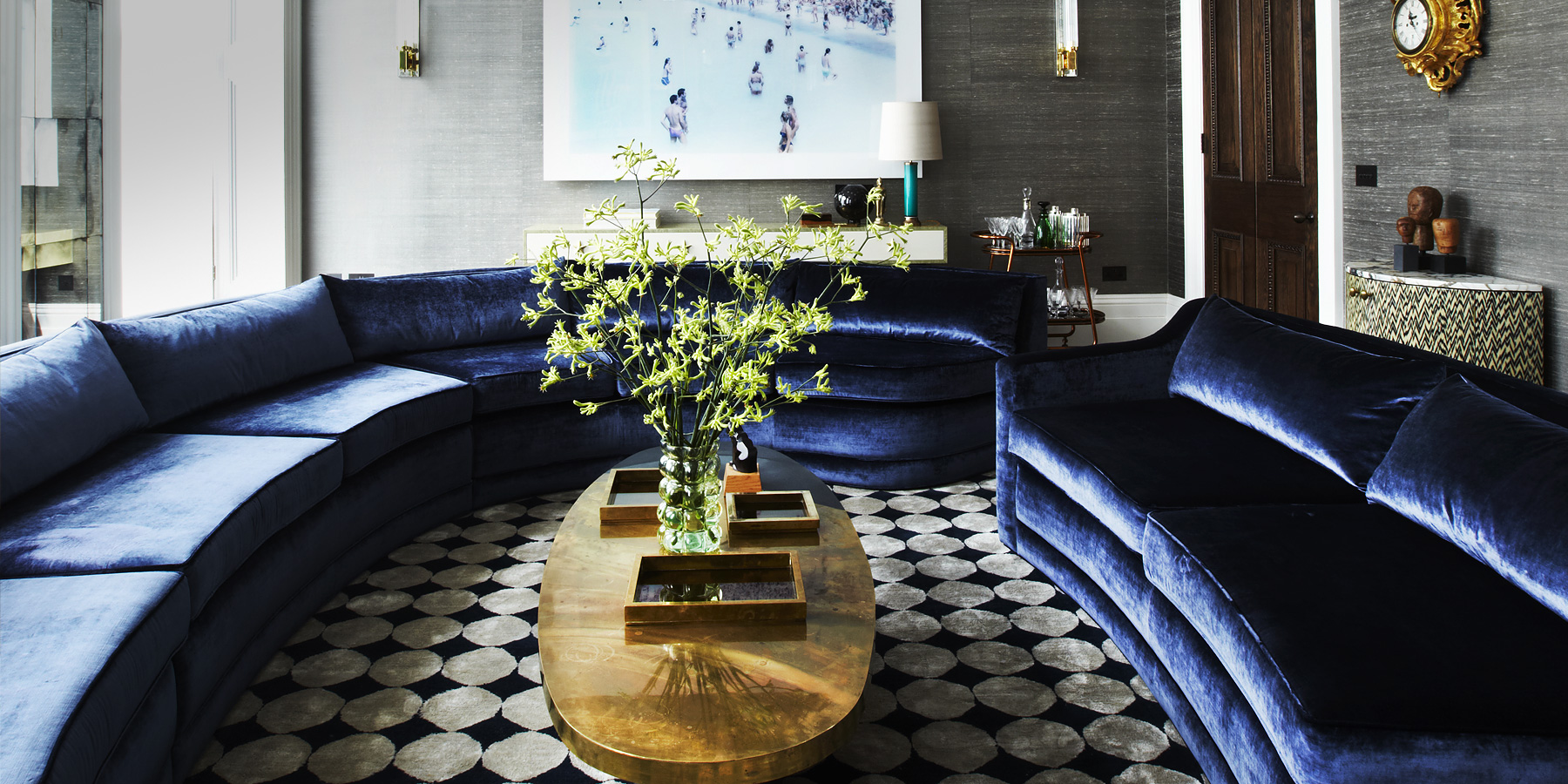 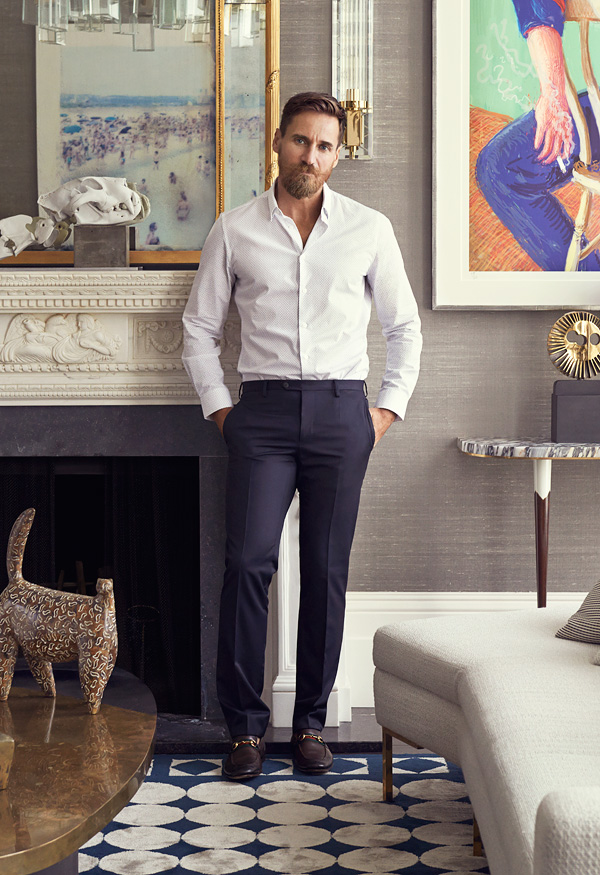 Interior designer Peter Mikic in the library of his London home, which is decorated in the blend of custom furnishings, ultra-luxe finishes and dashing pattern that has captured the attention of the city’s elite and the design world at large. Top: The home’s drawing room showcases a scene-stealing blue velvet sofa of Mikic’s own design. All photos by Kate Martin

The dining room of interior designer Peter Mikic’s Pembridge Gardens townhouse is a testament to his talent for curating a space with exuberance and flair. Art by fellow Londoners Damien Hirst and Grayson Perry sits alongside an antique Venetian mirror that Mikic rescued from a chicken shed in Venice — he was rummaging in an antiques shop there when the owner said he might have something of interest “out the back.” The oak and bronze Pembridge dining table, bird’s-eye-maple Art Deco–inspired sideboards, crystal and brass drop-pendant chandelier and chain-pattern rug are all from his own collection, which in turn draws on the talents of a variety of European artisans.

And then there’s the fireplace: a Robert Adam design made by specialist marble carvers in India. So impressed was Mikic with their handiwork that he has since ordered several for clients in different styles and marbles. His sleek black Labrador retrievers, Hunter and Bullitt, complete the scene perfectly.

Mikic describes the vibe of his home as “Claridge’s meets 1950s Milan” — which is apt, since the house, originally built in the 19th century as a middle-class residence, served most recently as a rundown hotel before he elevated it to new heights of glamour and elegance. In addition to his flawless aesthetic, Mikic is so charming and personable that it’s no surprise that his is now the studio of choice for London’s fashionable elite. He launched it in 2007, after 15 years in fashion, and his clients now include models, financiers, music producers, film directors and artists, many of whom have returned to him one, two or even three times. The house is the perfect calling card for his business. Indeed, one dinner party he threw here with his partner, Sebastian Scott, a film producer, so impressed a first-time guest that it resulted in the commission for his most prestigious project to date: the penthouse of a new landmark residence in London’s Chelsea area. But more on that later. 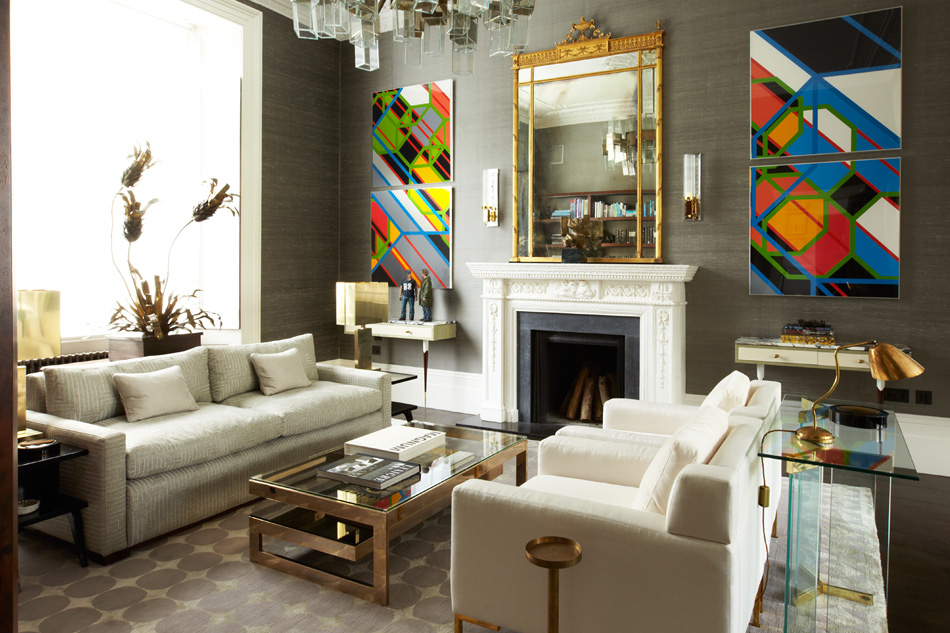 In Mikic’s London library, a pair of color-field paintings by Sarah Morris frame a gilt mirror and Robert Adam–inspired marble mantel. The mid-century brass and glass console (at right) is by FontanaArte. 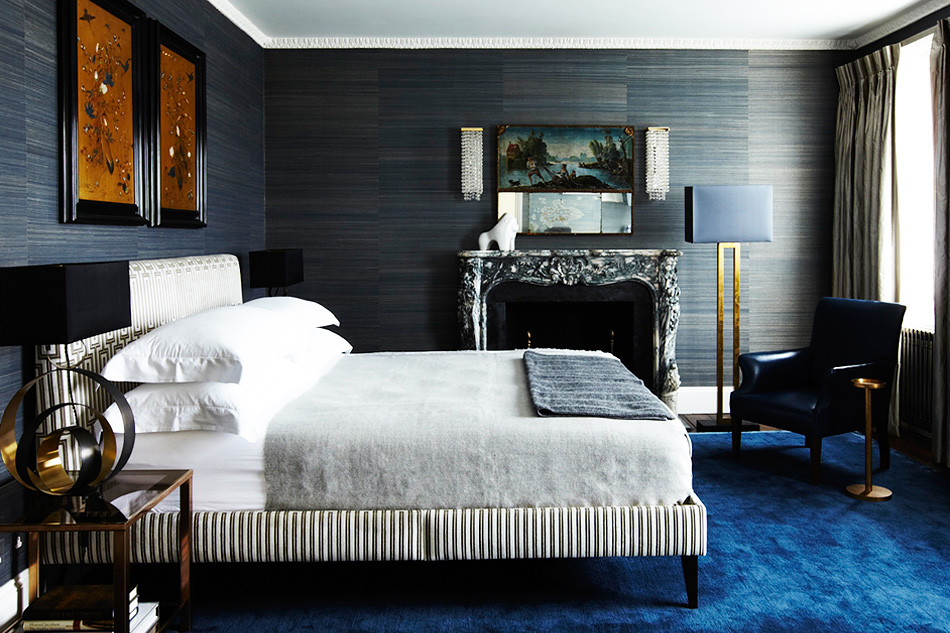 Japanese blue linen wallpaper and a wool-silk rug create a jewel-box effect in a guest room. The custom-made bed is wrapped in patterned velvet. 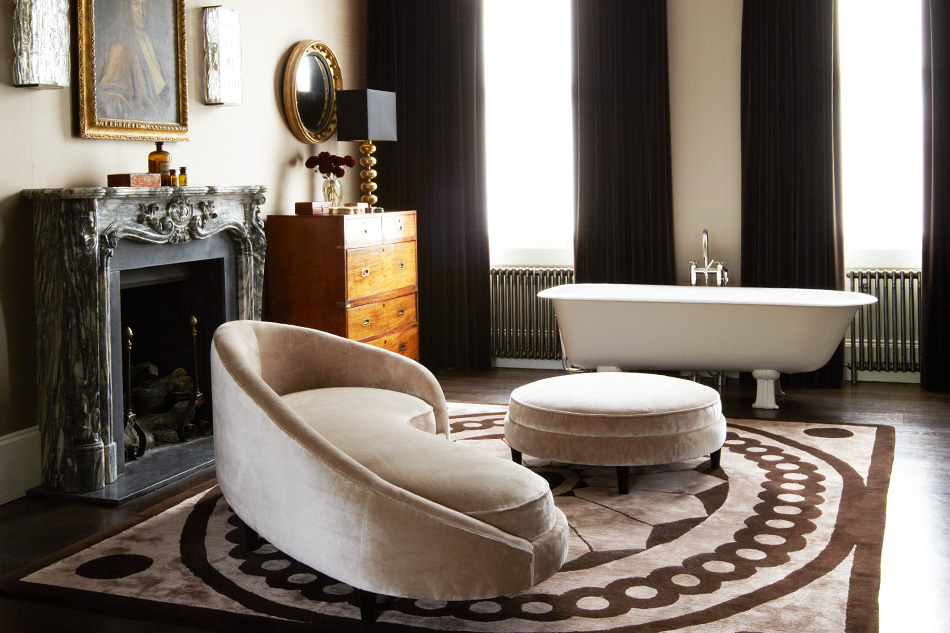 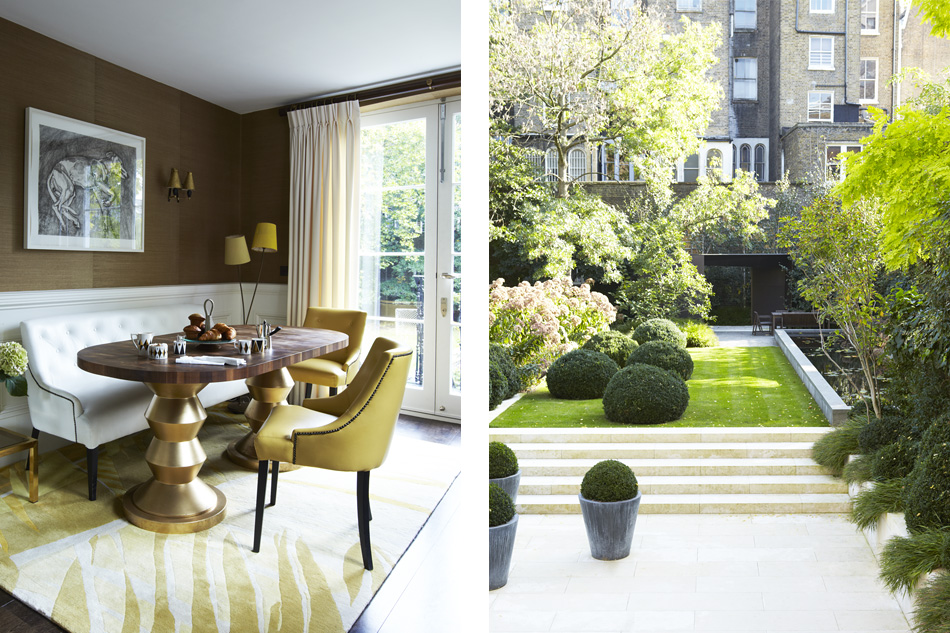 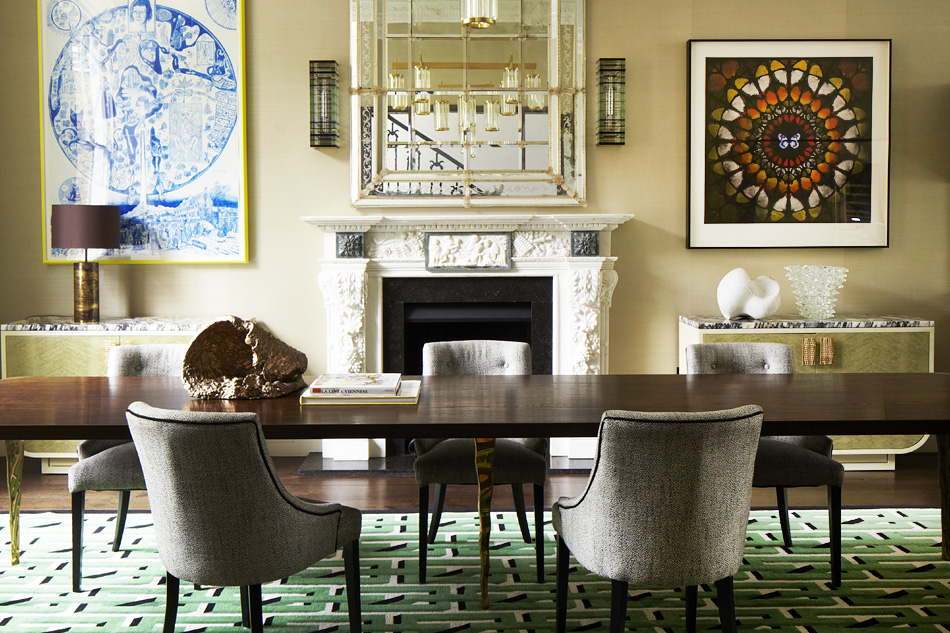 Graphic artworks by Grayson Perry (left) and Damien Hirst (right) set the tone for the pattern-filled dining room, where layered-glass wall lights, a chain-motif rug a and bronze table — all designed by Mikic — are accented by a Maggie Hambling bronze wave sculpture and a 19th-century Venetian mirror. 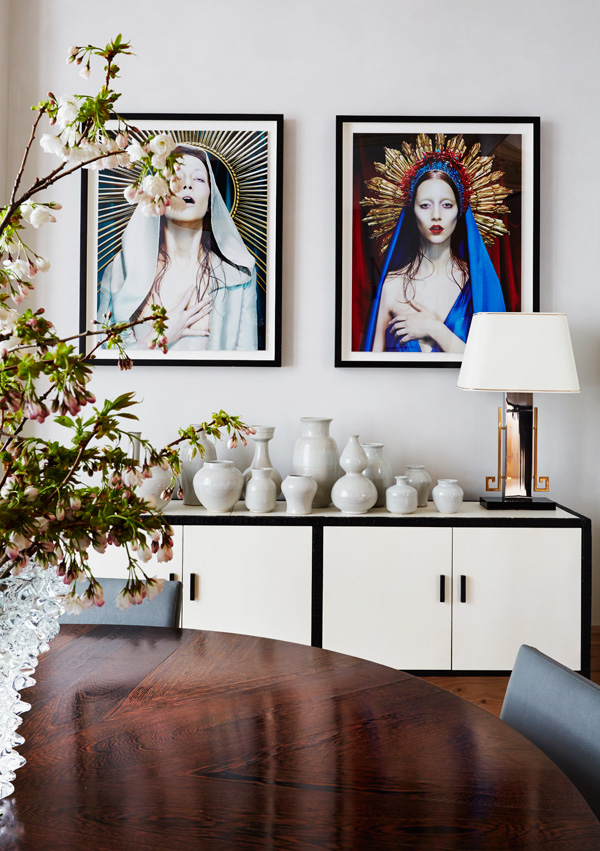 A pair of Miles Aldridge photographs watch over the dining room of a Mikic-designed Notting Hill home. The bespoke hammered-bronze and parchment sideboard holds a collection of Chinese pottery and a mid-century table lamp.

Born in Canberra, Australia, Mikic first came to London 24 years ago, at the age of 22. “I always knew I wanted to be in London,” he says. “I love its life and culture. I even love the winter here.” His childhood was a happy one — the influence of a property-developer father and a fashion-loving mother proved formative. “I remember visiting dad on building sites with mum, and she was wearing a white trench coat and gold stilettos,” he says. “She made quite an impression.” After secondary school, he studied fashion at the Royal Melbourne Institute of Technology, where he excelled. Full of confidence, he booked a one-way ticket to London after graduation.

By then it was the early ’90s and London was a stimulating place for a boy from Canberra with a passion for fashion. In 1996, Mikic launched his own fashion label, Stonewood & Bryce, with his friend Theo Vanderzalm. The look — “cargo pants and tweed jackets,” as Mikic describes it — was snapped up by top retailers, including Harvey Nichols, in London, and Barneys, in New York.

His plans were changed by fate in the form of a commission from millionaire property-developer brothers Nick and Christian Candy (the force behind London’s super-prime Knightsbridge address One Hyde Park) to create the staff uniforms for their yacht, Candyscape. Mikic and Vanderzalm designed beautiful kimonos with embroidered cranes on the backs. The Candys loved them so much that they then requested embroidered soft furnishings to complement the look. Hearing that they were designing for the Candys, a friend of Vanderzalm’s asked Mikic and Vanderzalm to take on the refurbishment of the interior of his own yacht. “It was one of those moments,” recalls Mikic, “when it is best just to say ‘Yes’ and then start doing your research!” 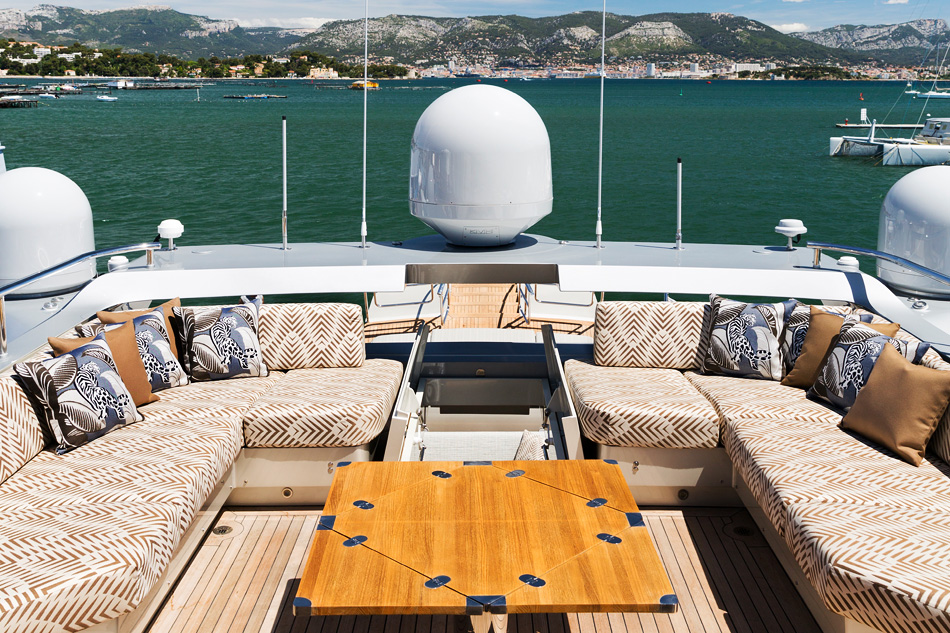 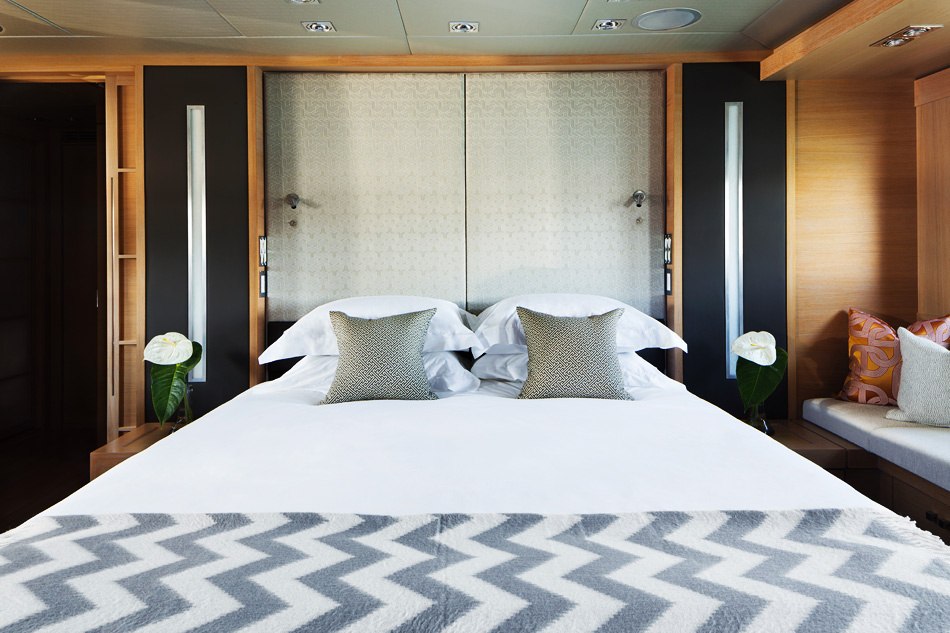 In the master stateroom, the padded headboard and cushions are covered in Hermès fabrics, and the throw is by Jonathan Adler. 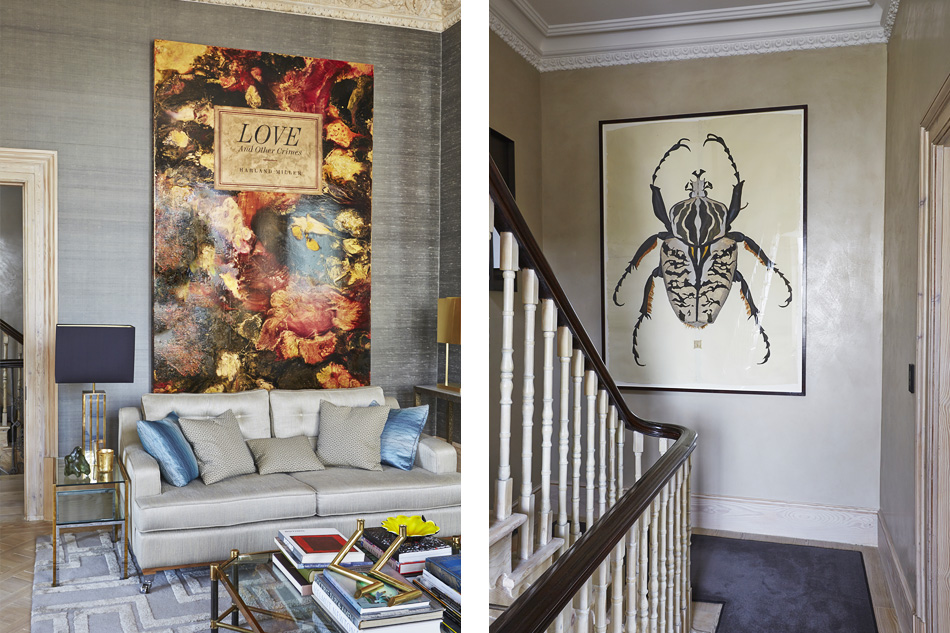 For the drawing room of the Notting Hill residence, Mikic left the stripped pine door frames and 19th-century cornices bare to contrast with the silk-sheathed walls. A Harland Miller artwork is displayed above a custom-made sofa in linen. The homeowner discovered the table lamp on 1stdibs. Right: A beetle picture hangs on the staircase’s polished plaster walls. The carpet is cashmere. 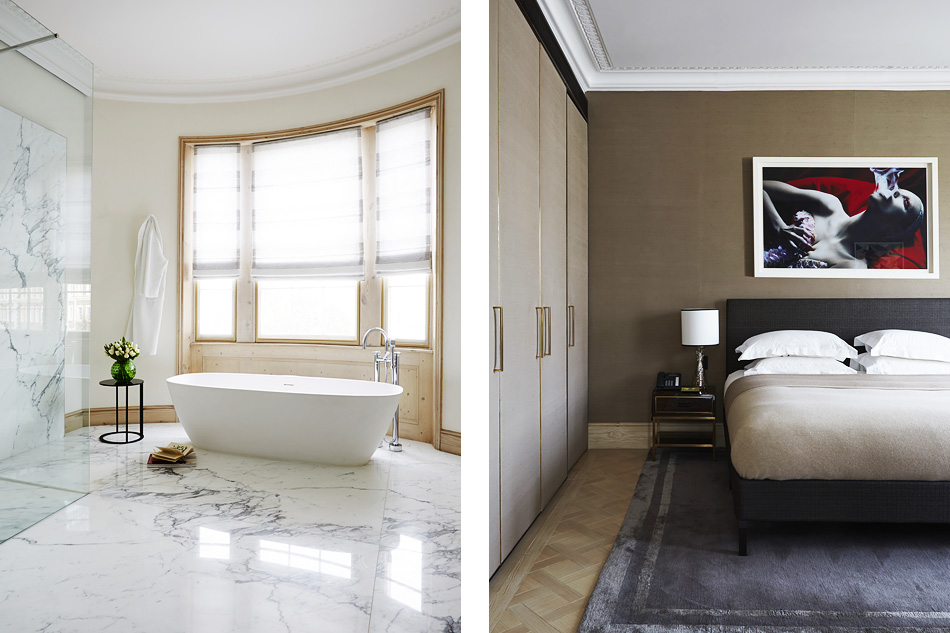 Left: Italian Carrara marble lines the master bath, which is appointed with Boffi fittings. Right: In the master bedroom, padded silk covers the walls and closet doors, the latter accented with custom-made bronze handles. The photograph is by Miles Aldridge. 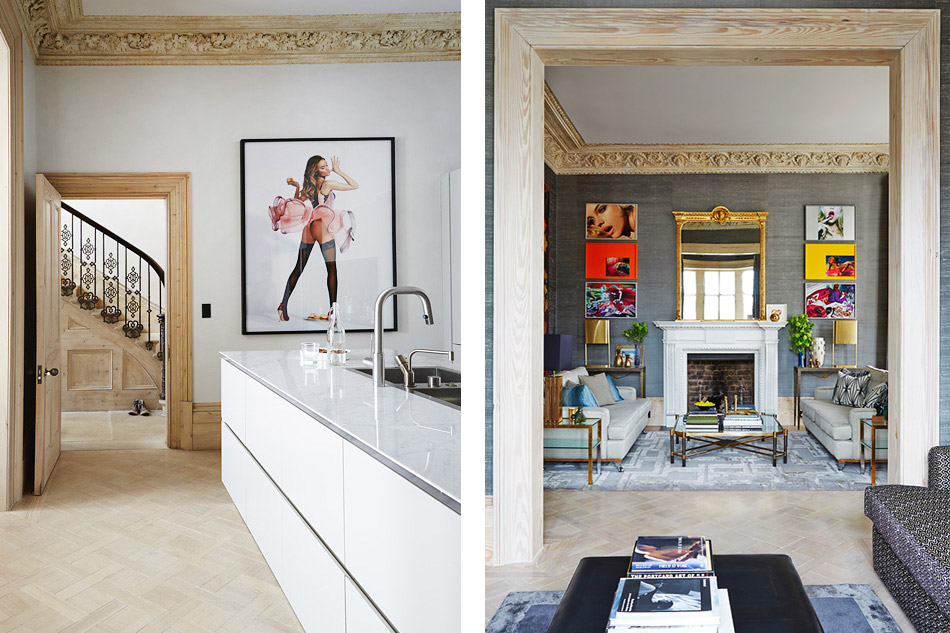 Left: Versailles-pattern floors in pale pine counterbalance the kitchen’s streamlined cabinetry. The photograph is by Justin de Villeneuve. Right: The gray silk-sheathed drawing room features a gilt 19th-century mirror, a marble fireplace surround from Jamb and a coffee table and side tables found on 1stdibs.

At first, he and Vanderzalm continued to run Stonewood & Bryce alongside their interiors projects, but as word-of-mouth spread, Mikic decided to go it alone, and in 2007 he founded his eponymous design studio. Today, he presides over a team of eight in an office close to his home. Current projects include a private residence in northern London’s Islington neighborhood for an American client who is, he says, “obsessed” with 1stdibs. “I think he sends me at least ten links to check out every night.”

Then there is the beautifully located St.-Tropez villa, where Mikic has gone for the barefoot look, with deep linen-upholstered sofas, bamboo furniture and bronze highlights. He is also renovating the interior of an Edwardian yacht that is more akin to a house, complete with wood paneling and a huge fireplace. His plans for refurbishing it include bold, contemporary art and atmospheric lighting.

“I always knew I wanted to be in London. I love its life and culture. I even love the winter here.” 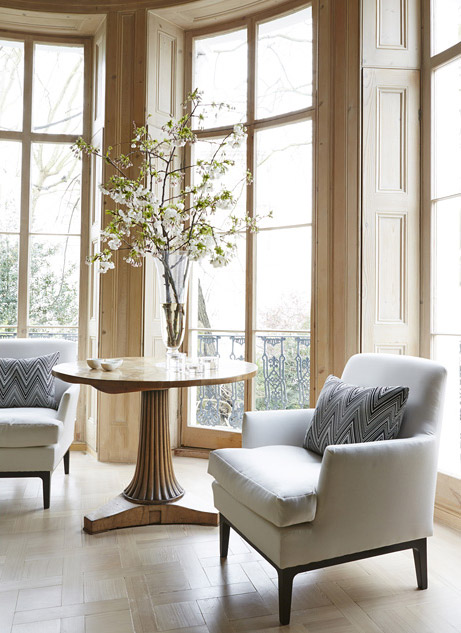 In a sitting area illuminated by floor-to-ceiling windows, custom-made armchairs topped with pillows in a Missoni print flank an antique pedestal table.

For Chucs, a contemporary Italian restaurant in Mayfair, Mikic has taken Giò Ponti as his primary inspiration, deploying bold patterns and eye-popping colors. The Stilnovo brass starburst pendant in the entrance would make the master himself proud.

Different again is the contemporary apartment overlooking the iconic balcony of Buckingham Palace, where Mikic has introduced double-height mirrored columns, mid-century lighting and black velvet sofas to evoke an ambience he describes as “cozy masculine.”

Mikic’s own country house, near Oxfordshire, is an 11,000-square-foot modern design — currently under construction — of local stone and other vernacular materials, with huge windows. It has beautiful views of the open countryside to the front and overlooks a courtyard garden by Tom Stewart-Smith at the back.

Then there’s the Glebe, the aforementioned new residential building in Chelsea, for which he has designed the model penthouse. “Most developers cut corners when it comes to the interior design,” says Mikic, “but these clients want the complete opposite — something you would love to live in yourself.” Here, he has created warmth and patina with artisanal furniture and lighting, cushions in mismatched antique textiles from Morocco and specially commissioned rugs from weavers in Nepal.

Indeed, it’s his passion for craftsmanship that feeds Mikics creativity more than anything else and keeps him springing out of bed each morning, whether he’s working with a foundry in deepest Wiltshire, with cabinetmakers in Brighton or with glassblowers in Lancashire. He is also an obsessive collector of antiques and vintage items, happily getting up in the early hours to scour a still-dark antiques market with bacon sandwich and coffee in hand. “Sebastian calls it being reverse burgled,” he says, laughing, “because there is always new stuff being brought into the house.” 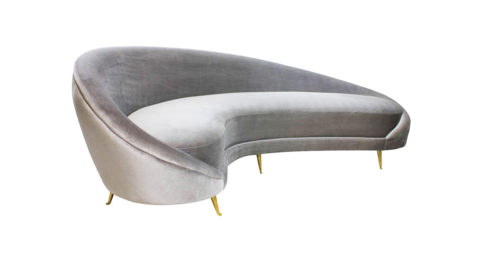 Shop Now
Sofa in the style of Ico Parisi, 1955, offered by Ebury Trading

“I love occasional sofas — particularly this one, inspired by Ico Parisi. They’re always lovely in a dressing room.” 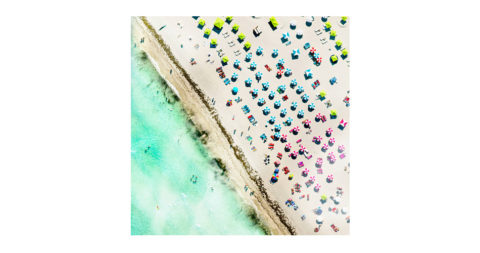 “I’m always drawn to color, composition or medium. It’s the splash of turquoise I love in this picture.” 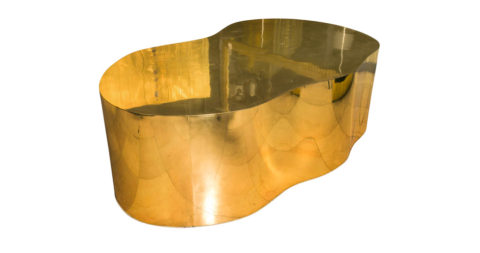 “I like to add an organic shape in a room. It always helps with flow and movement. I can imagine this dressed with sculptures, books and flowers.” 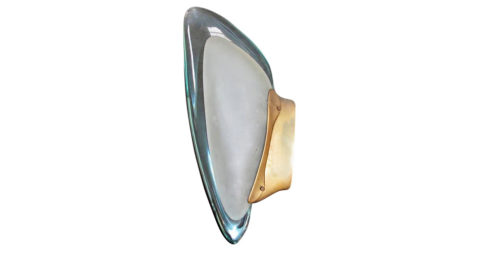 “Wall lights are my jewels. What’s not to love about a warm glow in the evening and something catching your eye during the day?” 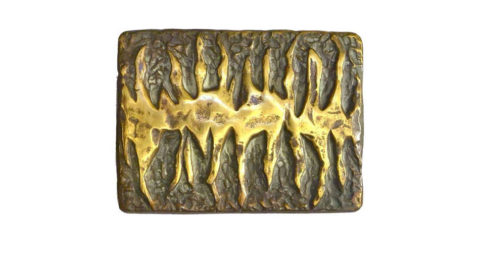 “I look for items with beautiful patinas that have warmth and texture, like this very tactile bronze handle.” 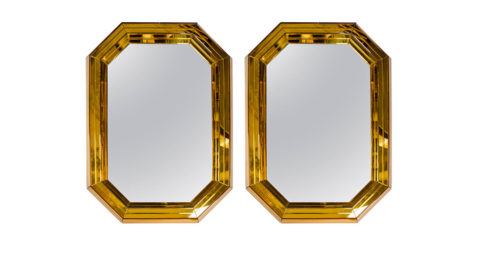 “I will always find something at Gallery 25 that helps make a room pop, like these beautiful hexagonal mirrors in yellow glass.”