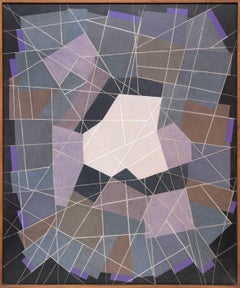 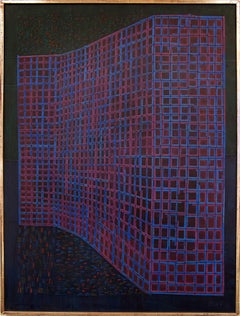 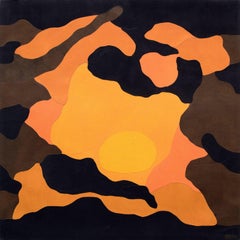 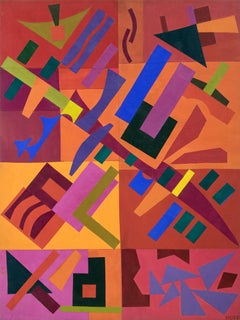 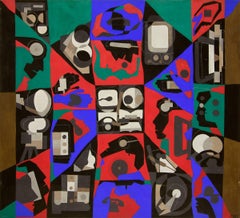 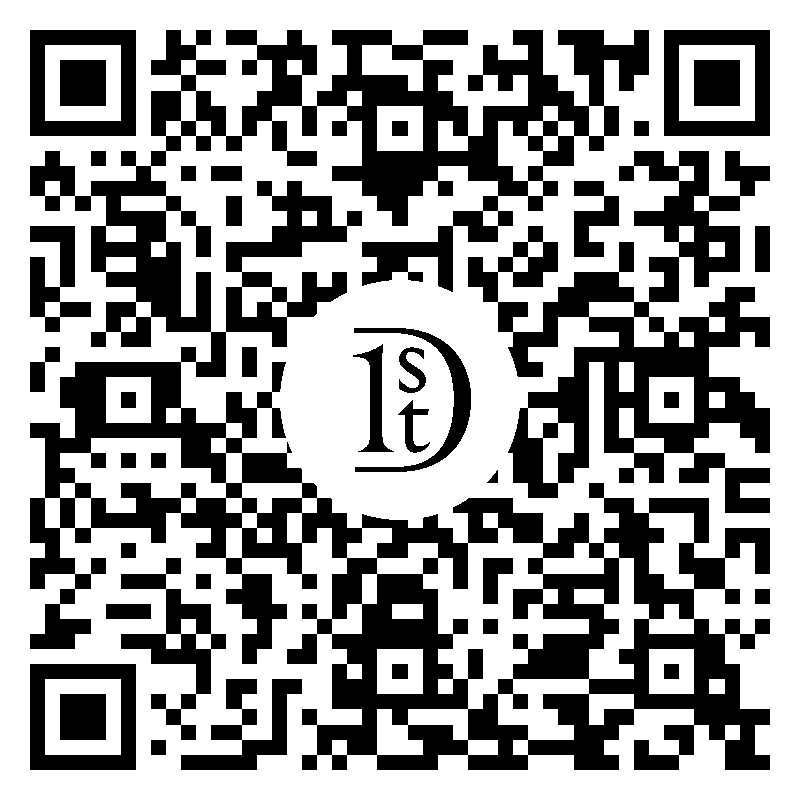 Carnival Series: Zig Zag original signed abstract by mid-20th century Chicago artist Margo Hoff (1910-2008). Presented in a vintage frame, outer dimensions measure 42 ¾ x 42 ¾ x 1 ½ inches. Image size is 34 x 34 inches. Provenance: Estate of the Artist A prolific artist, Margo Hoff’s exquisite style evolved throughout her career yet was always rooted in the events, people, and places in her life. Born in 1910 in Tulsa, Oklahoma, Hoff began creating white-clay animals at a young age, giving them to her friends and family. At eleven she contracted typhoid fever and was bedridden for a summer. During her convalescence, she drew and made cutouts, and it was during this time that her bold, artistic imagination came alive. She began formal art training in high school and continued her education at the University of Oklahoma, Tulsa. In 1933 she moved to Chicago and attended the National Academy of Art and the School of the Art Institute of Chicago. Between 1933 and 1960—her Chicago years—Hoff’s works was deeply rooted in a figurative, regionalist style. She often used elements of magical realism, and many of her paintings have dreamlike qualities. Hoff was a born adventurer and traveled extensively. She lived, worked, taught, and painted in Europe, Mexico, Lebanon, Uganda, Brazil, and China. She also showed at the Denver Art Museum’s Annual Western Exhibitions in 1952-54, 56, and 57. In 1957 she showed alongside Colorado modernist Vance Kirkland at the Denver Art Museum’s exhibition, Man's Conquest of Space. Hoff’s work began to change after 1957 when she saw Sputnik in its orbit around Earth. At that moment, she was able to imagine herself in space, looking down from the cosmos, and what she saw was an abstracted world. She then had the opportunity to peer into an electron microscope where once again she was looking down into what seemed to be a realm of pure abstraction. These two events profoundly changed her perspective and she began to move from figural painting to abstract, geometric collage. In 1960, Hoff moved to New York City and she began creating collages. Placing the canvas on the ground, and working from all sides, she used strips of painted paper and tissue—and later painted pieces of canvas—glued onto the canvas surface, building layer upon layer, shape against shape, “action of color next to stillness of color.” She believed these simplified, abstracted forms held the spirit of the subject in the same way poetry reduces words to their essence She passed away in New York City at the age of 98, leaving a rich legacy behind.

5 / 5
Our team of world-class specialists approve every seller on 1stdibs.
This distinction is for experienced sellers who continually surpass customer expectations.
1stdibs seller since 2013
Typical response time: 3 hours
Located in Denver, CO