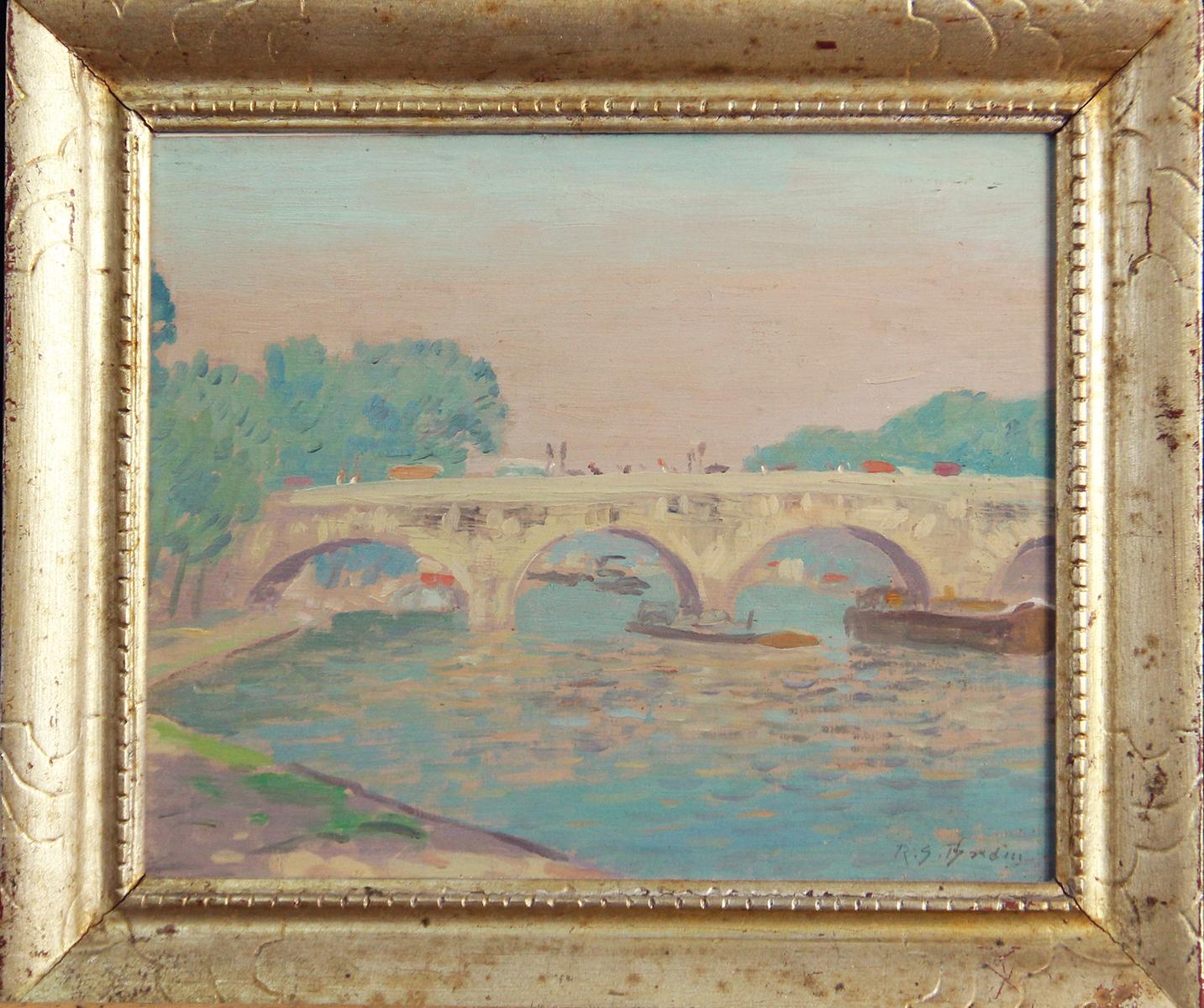 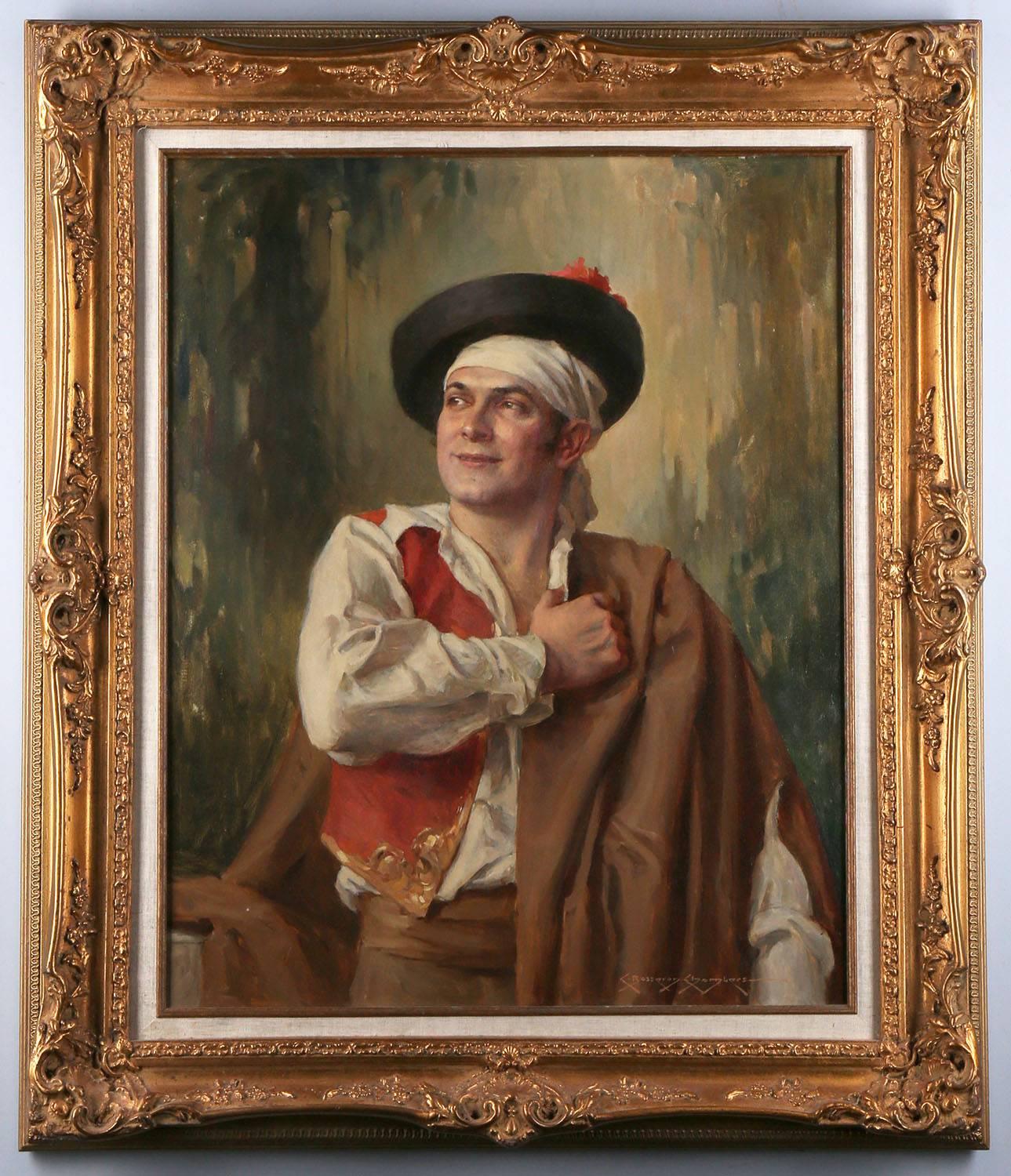 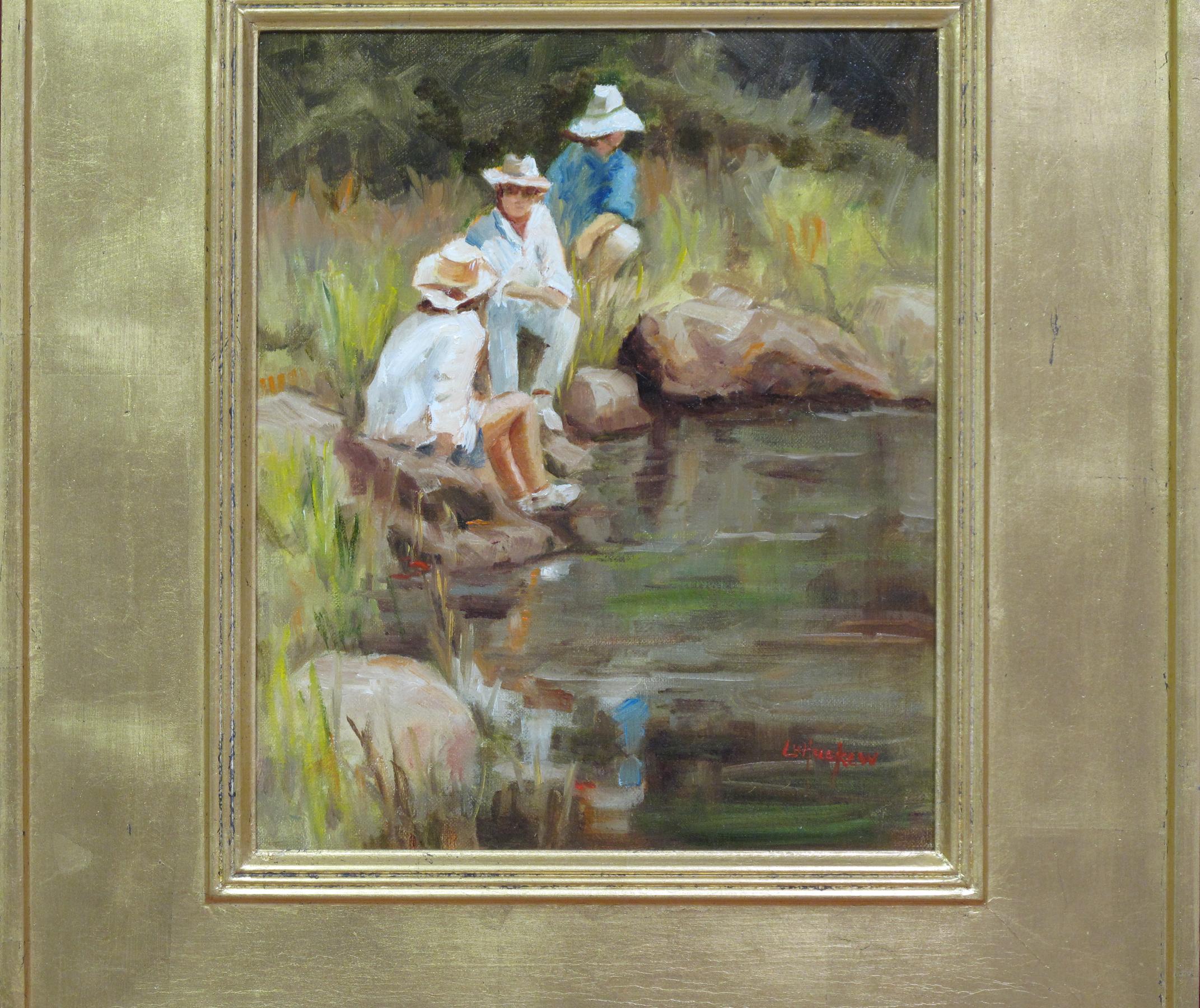 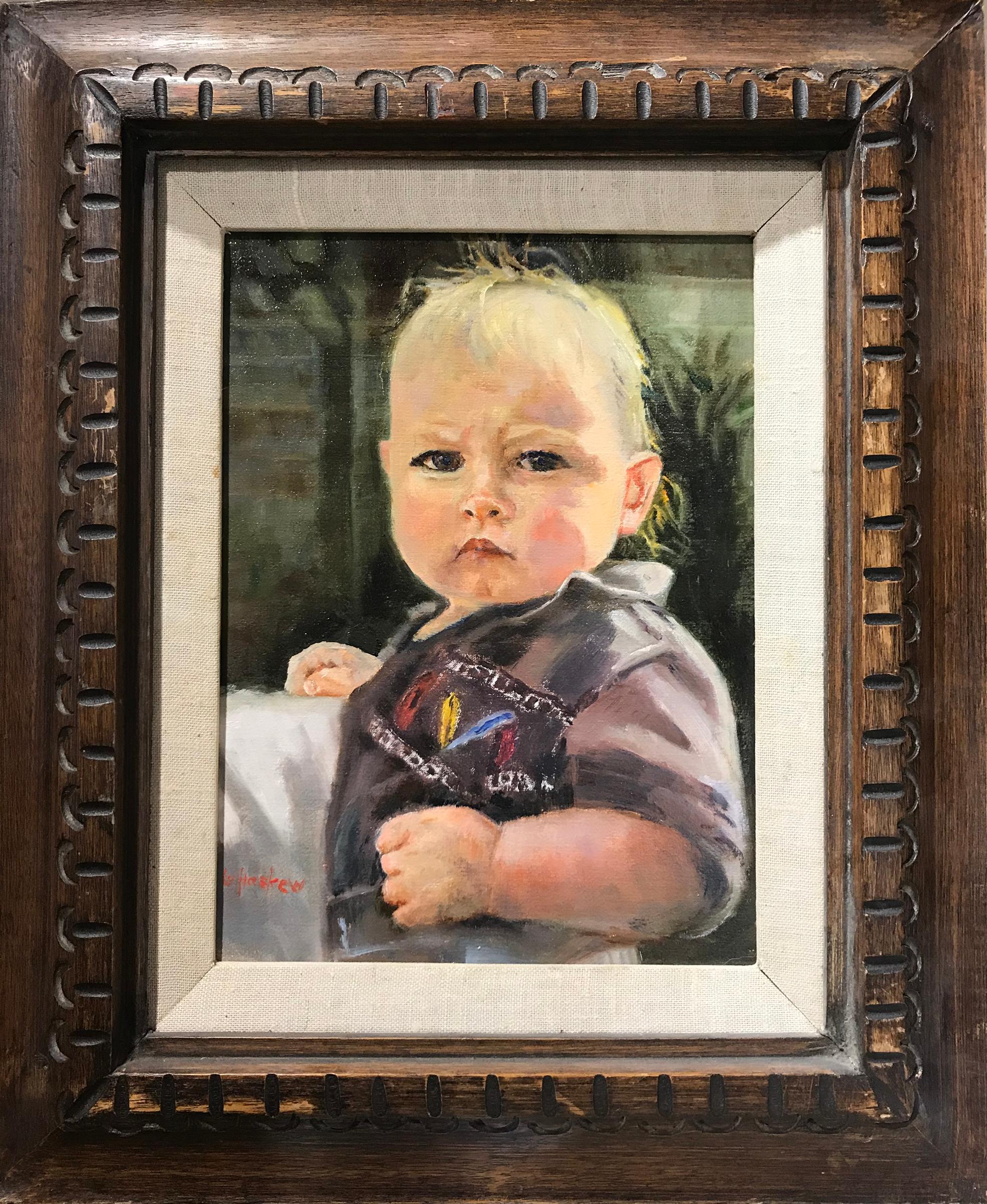 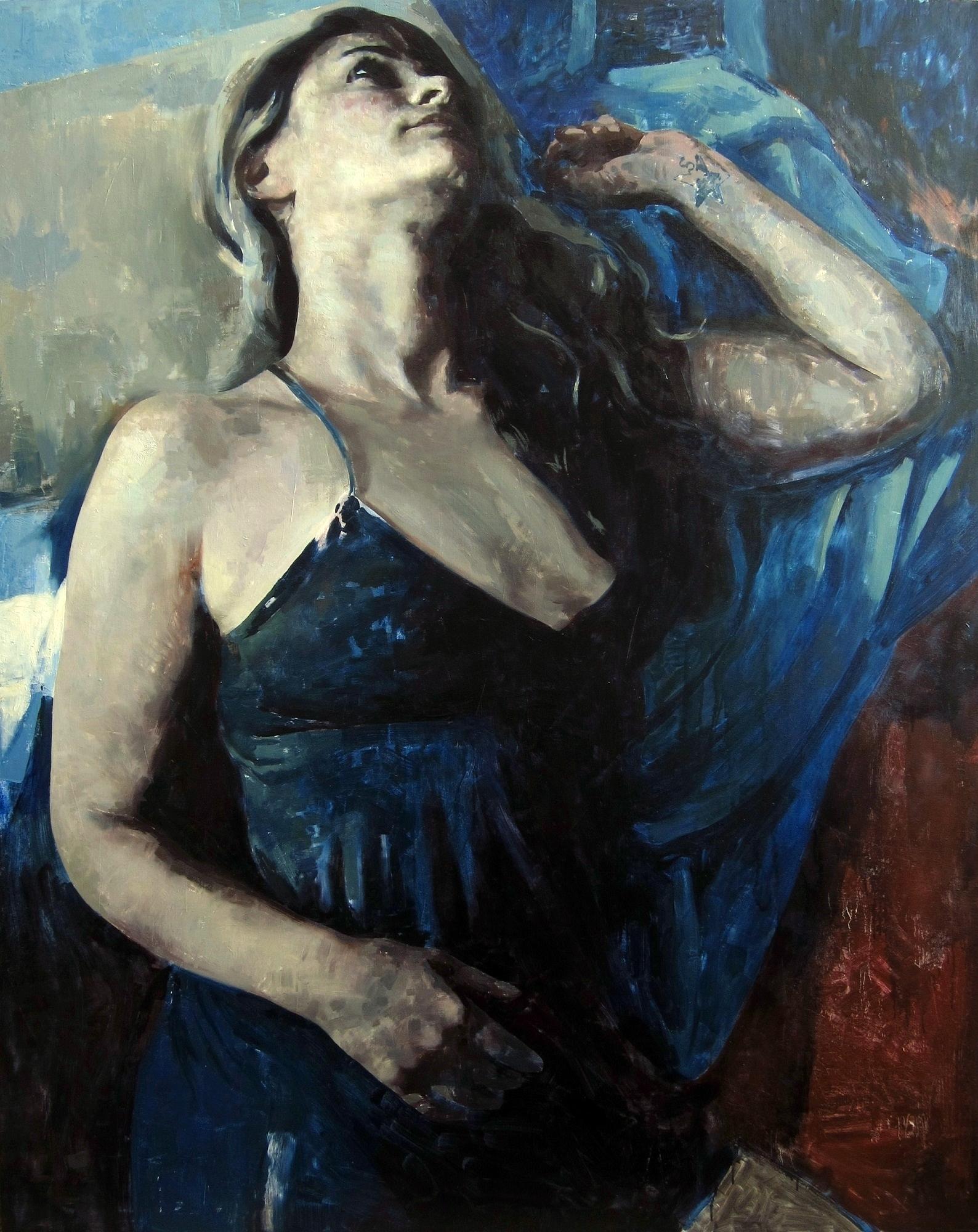 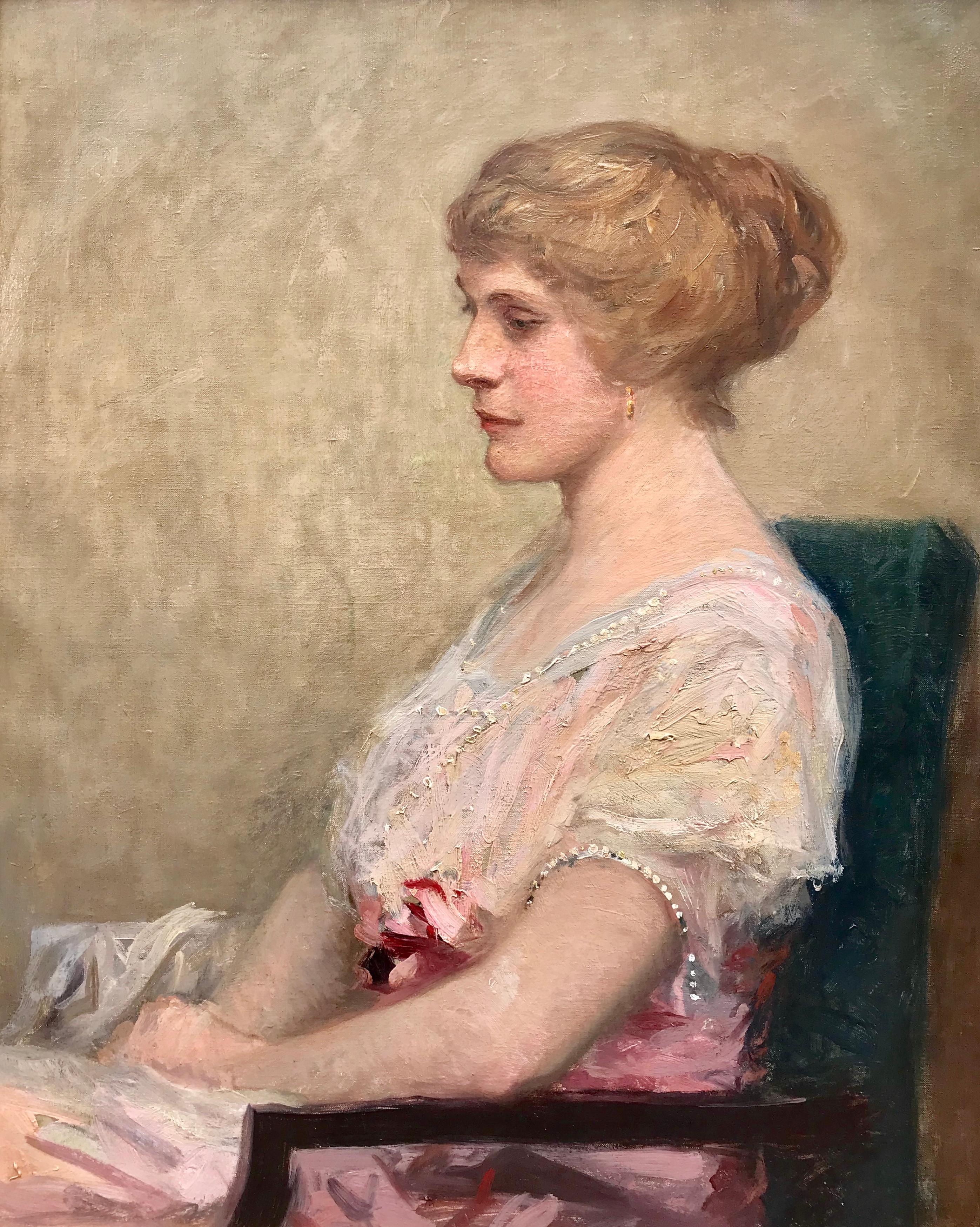 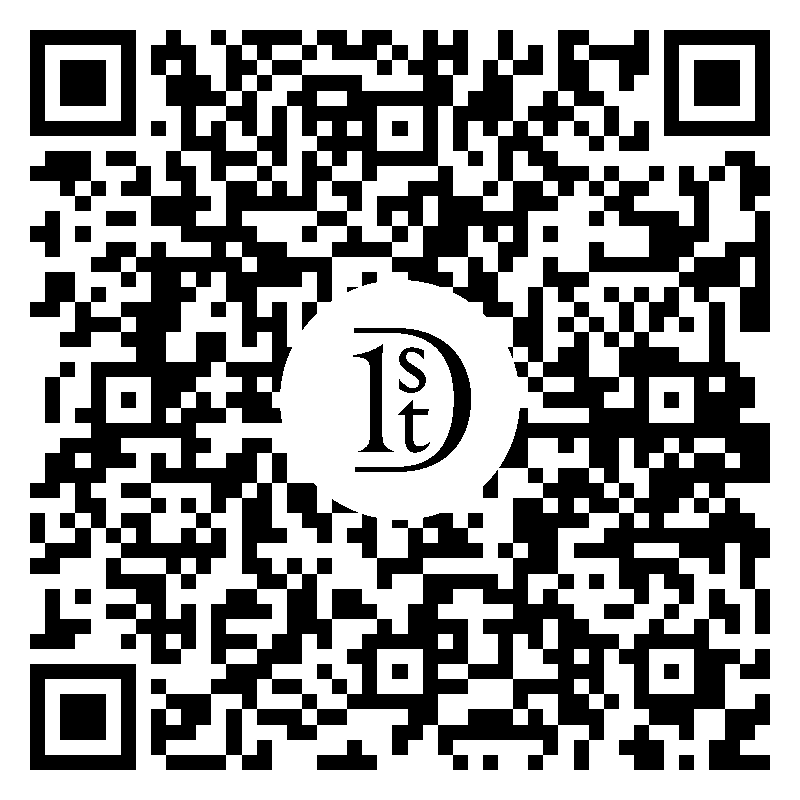 Jim’s of Lambertville is proud to offer this artwork. Signed lower left Period frame Rae Sloan Bredin (1881-1933) Rae Sloan Bredin, short lived at only fifty-two years of age, was unquestionably one of the New Hope Art Colony’s finest painters. His paintings exemplify Pennsylvania Impressionism at its finest hour. His compositions of children, gracious feminine figures, trees and flowers in bloom, and the landscape surrounding the Delaware River were not scenes of imaginary vision, Bredin was content painting the subjects he saw, where and as he saw them. When it came to his craft, Bredin was not a man of imagination, but an accurate interpreter of everyday life. It just so happened that everyday life in New Hope in the teens, twenties, and thirties, especially in the summer months, was a beautiful place to be. His delicate taste in color and flawless handling of light was, in part, a recipe for success, but it was also Bredin’s innate sense of beauty and charm clearly evident in his work that made for such appealing results. Often depicted in his paintings were his wife, Alice, his two young daughters, Jean and Barbara, and his only son, Stephen. Many of his landscapes were painted at the family home called “Shadow Lawn”, situated directly on the Delaware River just outside of New Hope. Bredin, the son of a physician, was born in Butler, Pennsylvania, in 1881. He attended the Pratt Institute in Brooklyn, New York, graduating in 1899. He continued his studies at the New York School of Fine Arts under the instruction of William Merritt Chase, Frank Dumond and Robert Henri. While in New York, Bredin befriended fellow students Robert Spencer and Charles Rosen, whom he would later join in New Hope. Later, after New York, Bredin enrolled at the Pennsylvania Academy studying under Thomas Eakins. Bredin was first introduced to New Hope on a visit to his friend Charles Rosen’s home in 1910. There, he met and later married Alice Price in 1914, who was the sister of the artist, M. Elizabeth Price, and F. Newlin Price, well-known art critic and owner of the Ferargil Gallery in New York City. Shortly thereafter, the Bredins travelled to France and Italy where Rae furthered his studies, and upon their return, purchased a home just north of New Hope. In 1921, Bredin was made an Associate of the National Academy of Design and taught at the Chase School of Fine Arts in New York. He also became an instructor at the Pennsylvania Academy of the Fine Arts, the University of Virginia, the Philadelphia School of Design for Women, the Trenton Academy, and the Holmquist School in New Hope. Bredin exhibited widely throughout his lifetime at prestigious institutions and won many awards and medals, including a Bronze Medal at the Panama-Pacific Exposition in San Francisco. He remained a resident of New Hope until his early death in 1933. His paintings are highly sought after by museums, collectors, and galleries. Because his career was cut short at the age of fifty-two, his body of work is much smaller than many of his contemporaries. Sources: - “New Hope for American Art” by Jim Alterman - The New Hope Magazine, August 1933. “Bredin Memorial Exhibition” - The New Hope Magazine, October 1933. “Tribute to Bredin” - New York Herald Tribune, 10/15/1933. “In Memory of an American Artist, Untimely Lost”. 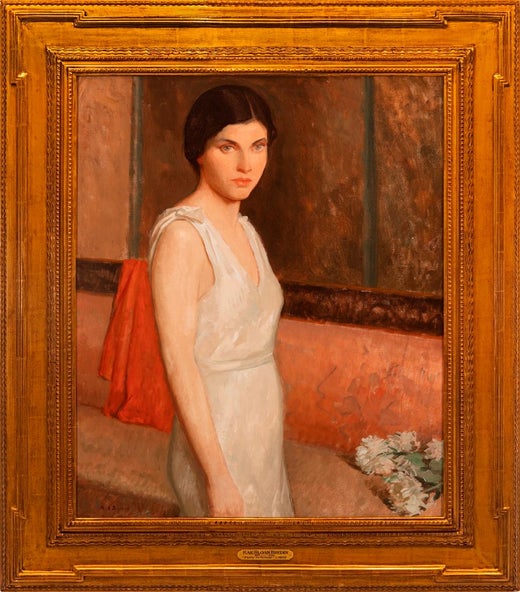 Cofounder of the Philadelphia School of Design for Women and the New York School of Fine Arts, Rae Sloan Bredin was a Pennsylvanian by birth and remained there most of his life. He was known for his landscape and portrait paintings and especially for his association with the New Hope Impressionist painters (he first visited New Hope in 1909).

Bredin was born in Butler, Pennsylvania, in 1881. After graduating from Pratt Institute in New York in 1898, he attended the New York School of Art from 1900 to 1903, where he studied under William Merritt Chase and Frank DuMond.

Bredin taught at both the New York School of Fine Arts and the Philadelphia School of Design for Women (now Moore College). His paintings are in the collections of the Corcoran Gallery, Washington, D.C.; National Arts Club, New York City; New Jersey State Museum, Trenton; Philadelphia Art Club; and Salmagundi Club, New York City. Upon his death in 1933, Bredin was given a memorial exhibition at Phillips Mill, New Hope.

About the Seller
5.0
Located in Lambertville, NJ
Vetted Seller
These experienced sellers undergo a comprehensive evaluation by our team of in-house experts.
1stDibs seller since 2014
33 sales on 1stDibs
Typical response time: <1 hour
More From This Seller

$4,400 Sale Price
20% Off
At Doug's Place
By Lu Haskew
Located in Loveland, CO
At Doug's Place by Lu Haskew Oil 12x10" image size Plein Air artists sit by a river discussing on break from the day of painting. ABOUT THE ARTIST: Lu considered it a must to work...
Category

$640 Sale Price
20% Off
"The Searching," Oil painting
By Hollis Dunlap
Located in Denver, CO
Hollis Dunlap's (US based) "The Searching" is an original, handmade oil painting that depicts a blonde woman reclining, in her black slip, into blue and warm hued fabric. Artist Bi...
Category

$8,500
John "Scrappy" Ramirez, portrait, pro-boxer, oil painting, Execute Your Plan
Located in Houston, TX
Look for discount Shipping Code when checking out Scrappy is an oil on canvas painting by Joan Breckwoldt from Houston, Texas. It is framed in a custom floater frame. Scrappy bring...
Category

$9,500
The Dance, Baroque Art, Fictional Portraits, Oil, One-of-a-Kind, Illuminate
By Ray Donley
Located in Houston, TX
“I am a painter who, against all odds, creates Baroque-inspired, psychologically charged fictional portraits that seek to illuminate aspects of the human condition.” - Ray Donley Ed...
Category

$7,000
Portrait of a Young Woman in White Blouse
By Carroll Sargent Tyson Jr.
Located in New York, NY
Few artists are more closely affiliated with a city than Carroll Sargent Tyson is with Philadelphia. Born and raised there, he received his early training at the Pennsylvania Academy...
Category

$45,000
Alyce
By Paton Miller
Located in New York, NY
Paton Miller’s natural talent as an artist was apparent from an early age when his family noticed Miller drawing caricatures of the family. This interest in the family condition grew...
Category