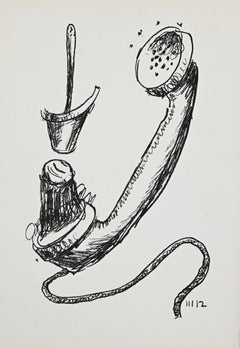 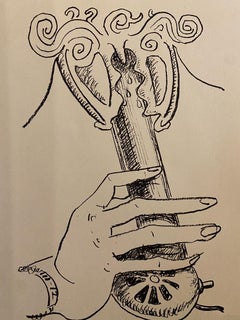 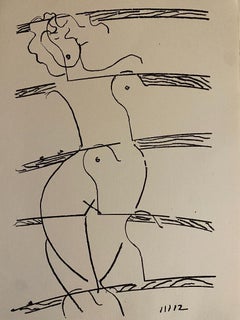 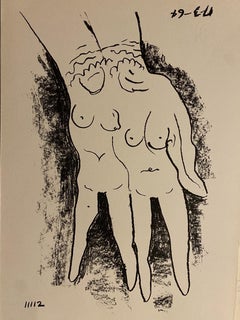 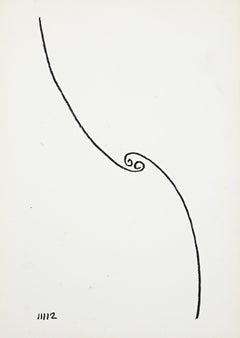 H 12.8 in. W 9.06 in. D 0.04 in.
Invisible Poem - Original Lithograph by Man Ray - 1964
By Man Ray
Located in Roma, IT
Invisible Poem is an original lithograph realized by Man Ray in 1964. In good conditions. Not signed and not numbered, it belongs to the Suite "The Absolute Real" by Man Ray and Ma...
Category 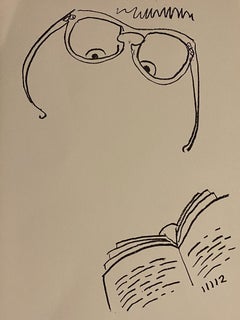 H 11.07 in. W 8.86 in. D 0.04 in.
Movement from Fire - Original Lithograph by Man Ray - 1964
By Man Ray
Located in Roma, IT
Movement from Fire is an original lithograph, realized by Man Ray, in 1964 as part of the suite "The Absolute Real" In good conditions. This artwork represents a movement from fire...
Category 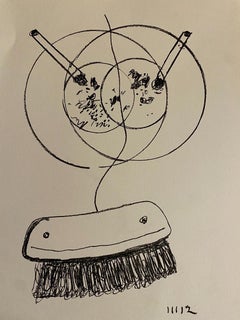 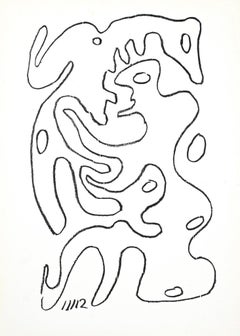 H 43 in. W 34.5 in. D 1.75 in.
Alexandre Lolas Exhibition Poster. Made in Italy
By Man Ray
Located in Clinton Twp, MI
Poster. Made in Italy. Measures 32.75 x 19 inches and is unframed. The piece is in Good/Fair Condition-significant fading/discoloration primarily on the top portion of the print-cons...
Category

H 33 in. W 26 in. D 1 in.
Les Heures Heureuses - Original Lithograph by Man Ray - 1970s
By Man Ray
Located in Roma, IT
Les heures heureuses is colored lithograph realized by the surrealist artist Man Ray in the 1970s. This surrealist print is hand-signed with monogram of the artist in pencil on the l...
Category

H 31.5 in. W 23.63 in. D 0.04 in.
"Apples" Color Lithograph Hand Signed Man Ray
By Man Ray
Located in Wiscasset, ME
Signed in pencil and numbered 58/120. Man Ray, born Emmanuel Radnitzky in 1890 in Philadelphia, Pennsylvania, was a renowned representative of avant-garde photography in the 20th ce...
Category

H 30 in. W 24 in. D 1 in.
"Dancer-danger" Color Lithograph by Man Ray
By Man Ray
Located in Palm Desert, CA
A lithographic print of "Dancer-Danger" by Man Ray, created in 1972, of an earlier work created in 1920. Custom framed in a lacquered burl wood frame with yellow and white gold fille...
Category

H 21.26 in. W 15.75 in.
Les Heures Heureuses - Original Lithograph by Man Ray - 1970s
By Man Ray
Located in Roma, IT
Les heures heureuses is lithograph realized by the surrealist artist Man Ray in the 1970s. The artwork is hand-signed with monogram artist in pencil on the lower right. Numbered on ...
Category

H 19.81 in. W 14.18 in.
Man Ray Color Lithograph
Located in Hollywood, CA
Signed color lithograph by Man Ray, the famous American modernist artist. This piece is signed in pencil on the recto (front) and stamped by the Man Ray Trust on the verso (back). T...
Category

There is a broad range of man ray lithographs for sale on 1stDibs. There are many Surrealist, Modern and Abstract versions of these works for sale. These items have long been popular, with older editions for sale from the 20th Century and newer versions made as recently as the 20th Century. Man ray lithographs available on 1stDibs span a range of colors that includes beige, gray, brown, orange and more. Frequently made by artists working in lithograph, acrylic paint and color pencil, all of these available pieces are unique and have attracted attention over the years.

How Much are Man Ray Lithographs?

Born Emmanuel Radnitzky, Man Ray was a famous American filmmaker, painter and photographer. His career is distinctive, above all, for the success he achieved in both the United States and Europe. First maturing at the center of American modernism in the 1910s, he made Paris his home in the 1920s and 1930s. In the 1940s, he crossed the Atlantic once again and spent periods in New York and Hollywood.

Ray’s art spanned painting, sculpture, film, prints and poetry, and in his long career, he worked in styles influenced by Cubism, Futurism, Dada and Surrealism. He also successfully navigated the worlds of commercial and fine art and came to be a sought-after fashion photographer. Ray is perhaps most remembered for his photographs of the inter-war years, in particular, the camera-less pictures he called "Rayographs," but he always regarded himself first and foremost as a painter. Although he matured as an abstract painter, Ray eventually disregarded the traditional superiority painting held over photography and happily moved between different forms. Dada and Surrealism were important in encouraging this attitude; they also persuaded him that the idea that motivates a work of art was more important than the work of art itself.

André Breton once described Ray as a pre-Surrealist, something which accurately describes his natural affinity for the style. Even before the movement had coalesced, in the mid-1920s, his work, influenced by Marcel Duchamp, had Surrealist undertones. He would continue to draw on the movement's ideas throughout his life. Ray's work has ultimately been very important in popularizing Surrealism.