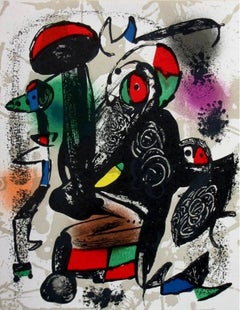 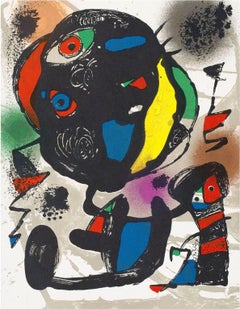 H 23.75 in. W 19.875 in.
Cover from 'Miró Lithographs IV, Maeght Publisher' original print by Joan Miró
By Joan Miró
Located in Milwaukee, WI
This original lithograph is one of six produced by Joan Miró especially for the fourth volume of the catalogue of his lithographs. These are excellent examples of his later work and ...
Category

H 18.13 in. W 15.5 in.
Miro Salon Original Vintage Poster
By Joan Miró
Located in Melbourne, Victoria
Joan Miró was a Spanish painter, sculptor, and ceramicist who was born in Barcelona. Miro has a museum dedicated to his work, the Fundació Joan Miró, was established in his native ci...
Category

H 12.01 in. W 9.26 in. D 0.04 in.
Vintage Poster Origianl Galerie Maeght Miro Modern Art Design Exhibition
By Joan Miró
Located in Melbourne, Victoria
Joan Miró was a Spanish painter, sculptor, and ceramicist who was born in Barcelona. Miro has a museum dedicated to his work, the Fundació Joan Miró, was established in his native ci...
Category

Size: M
Joan Miro Benedikt Taschen Vintage Kimono
Located in Amsterdam, NL
Collectors -item This vintage kimono by Joan Miro with "The litle fair girl in the park" art print is made of light cotton with a belt, no pockets. Color: yellow, black and colors...
Category

H 22 in. W 19.5 in.
Almario
By Joan Miró
Located in New York, NY
MIRÓ, Joan. Almario. By José-Miguel Ullán. Illustrated with 5 drypoints and an etching with aquatint printed in colours. Folio, loose as issued in the original wrappers and cloth...
Category

H 13 in. W 9.85 in. D 0.4 in.
La melodie acide. lithograph
By Joan Miró
Located in CORAL GABLES - MIAMI, FL
La melodie acide. signed on the stone and numbered 384/1500 Edition of 1500 prints on Arches paper. and with the Artist´s signature on each of the plates Edited by Poligrafa in Barce...
Category

Find the exact miro 1980 you’re shopping for in the variety available on 1stDibs. In our selection of items, you can find Abstract examples as well as a Surrealist version. Making the right choice when shopping for a miro 1980 may mean carefully reviewing examples of this item dating from different eras — you can find an early iteration of this piece from the 20th Century and a newer version made as recently as the 20th Century. Adding a miro 1980 to a room that is mostly decorated in warm neutral tones can yield a welcome change — find a piece on 1stDibs that incorporates elements of gray, black, beige, brown and more. Finding an appealing miro 1980 — no matter the origin — is easy, but Joan Miró and (after) Joan Miró each produced popular versions that are worth a look. Artworks like these — often created in lithograph, etching and aquatint — can elevate any room of your home.