Alfred Munnings was born on 8th October 1878 at Mendham Mill, Mendham, Suffolk, across the River Waveney from Harleston in Norfolk to Christian parents. His father was the miller and Munnings grew up surrounded by the activity of a busy working mill with horses and horse-drawn carts arriving daily. After leaving Framlingham College at the age of 14, he was apprenticed to a Norwich printer, designing and drawing advertising posters for the next six years, attending the Norwich University of the Arts in his spare time. When his apprenticeship ended, he became a full-time painter. The loss of sight in his right eye in an accident in 1898 did not deflect his determination to paint, and in 1899 two of his pictures were shown at the Royal Academy Summer Exhibition. He painted rural scenes, frequently of subjects such as Gypsies and horses. Munnings was associated with the Newlyn School of painters, and there he met Florence Carter-Wood, a young horsewoman and painter. They married on 19th January 1912, but she tried to kill herself on their honeymoon and did so in 1914. Munnings bought Castle House, Dedham, in 1919, describing it as "the house of my dreams." He used the house and adjoining studio extensively throughout the rest of his career, and it was opened as the Munnings Art Museum in the early 1960s, after Munnings's death. He was elected president of the Royal Academy of Arts in 1944, was made a Knight Bachelor in the same year, and was appointed a Knight Commander of the Royal Victorian Order in the 1947 New Year Honors. Munnings died at the Castle House, Dedham, Essex, on 17th July 1959. The village pub in Mendham is named after him, as is a street there. His immensely popular sporting artworks have enjoyed popularity in the United States as well as the United Kingdom and elsewhere. During his lifetime, some of Munnings's works were purchased by the wealthiest collectors of the day. In 2007, his Red Prince Mare sold for $7,848,000. 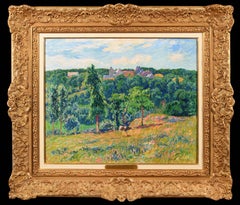 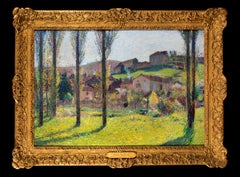 Figures in a Park
By Luigi Loir
Located in Broadway, GB
Category

Luigi Loir
Figures in a Park