Amedeo Bocchi was enrolled at the Regio Istituto di Belle Arti in Parma. After graduating in 1901 with the highest grades, he attended the School of Nude Art in Rome, where he spent the rest of his life. In 1910, Bocchi was accepted, for the first time, with two paintings, to the Venice Biennial, where he can admire the great solo exhibition by Gustav Klimt. In 1911, at the Grand Exposition in Rome for the 15th anniversary of the Italian Unification, Bocchi produced, in collaboration with Barilli, de Strobel and Brozzi, a reconstruction of the Golden Room in the Castle of Torrechiara. In 1913, although he never officially subscribed to the manifesto of the Roman Secession, Bocchi was greatly impressed by the first exhibition organized by the group. Between 1913–15, he used his knowledge in the field of frescoes for the important job given to him by the Cassa di Risparmio di Parma bank for the decoration of the Council Meeting Hall. Bocchi processes the influence from Liberty and Klimt in a very original manner; his work, completed in 1916, obtains unanimous consensus of the critics. In 1915, he obtained the privilege of living in one of the studio-houses in Rome, made available to artists by Alfred Strohl, Villa Strohl-Fern. Bocchi would spend the rest of his life there, producing a series of masterpieces that would allow him the participation in the Biennial, the nomination as Academic of St. Luke, and a gold medal for his painting Bianca in abito da sera at the 1926 exhibition in Monza. Bocchi’s contribution to the artistic research of the 1900s is expressed through the processing of a unique and exceptional journey patiently built around the pictorial value of light and the strength of family affection. 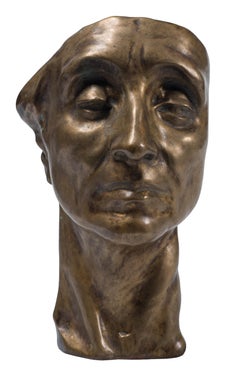 Houses on Shores in Capri - Oil on Board by V. Caprile - Early 20th Century
By Vincenzo Caprile
Located in Roma, IT
Category

Drawbridge over the Estense Castl - Original Oil on Board by G. B. Crema - 1920s
By Giovanni Battista Crema
Located in Roma, IT
Category

Giovanni Battista Crema
Drawbridge over the Estense Castl - Original Oil on Board by G. B. Crema - 1920s, 1920s

Landscape - Oil on Canvas by A. Donghi - 1937
By Antonio Donghi
Located in Roma, IT
Category

Landscape - Oil on Cardboard by A. Hollaender - Late 19th Century
By Alfonso Hollaender
Located in Roma, IT
Category

The Gulf of La Spezia - Oil on Canvas by A. Donghi - 1946
By Antonio Donghi
Located in Roma, IT
Category