The San Francisco area woodworker Arthur Espenet Carpenter was one of the most celebrated figures in the postwar American Studio Furniture movement. Like George Nakashima, Sam Maloof, Wendell Castle and other craftsmen of the era, Carpenter built furniture both as a means of creative expression and for the simple personal fulfillment of making a thing well. The excellence of their work stood in high relief against the mass-produced goods made of synthetic materials that became prevalent in the mid-20th century.

Born in New York City during the Jazz Age, Carpenter earned a degree in economics from Dartmouth College and initially intended to become an accountant, like his father. But after serving four years in the United States Navy in the Pacific during World War II, Carpenter had a change of heart about entering the business world. Back in New York, he became an Asian-arts dealer but finally found a true sense of direction when visiting the “Good Design” shows held in that era at the Museum of Modern Art. Carpenter was particularly taken with the hand-turned wooden bowls by James Prestini and decided he wanted to make objects himself.

To get far from New York, he drove to San Francisco at age 28, bought a lathe and, with the help of a G.I. Bill small-business stipend, opened a woodworking shop in the Mission District. Carpenter started out making bowls, sold through local high-end retailers such as Geary’s. His skills improved, and within a few years Carpenter had moved to the coastal town of Bolinas, California, where he built furniture on commission. His national reputation was sealed when in 1972 — somewhat to Carpenter’s own surprise — his designs were shown by the Smithsonian American Art Museum’s Renwick Gallery in the exhibition “Woodworks,” alongside those of Nakashima, Maloof, Castle and the Philadelphia-area craftsman Wharton Esherick.

Carpenter defined a new design aesthetic now known as the “California roundover” — a style characterized by flowing lines and gently-contoured edges that make wood feel almost supple to the touch. The graceful and comfortable Wishbone chair, so named for the tapered supports that form its legs, is Carpenter’s signature design. The chairs, typically made of black walnut, are usually priced in the range of $20,000 a piece. Because of its simplicity and economy of materials, Carpenter’s furniture works well in any informal, unfussy decor — though it is particularly striking in a modern environment. As you will see on these pages, the work of Arthur Espenet Carpenter is both friendly and exquisite. The quality of its craftsmanship is impeccable, and it exudes the gentle warmth of the lovingly handmade object. 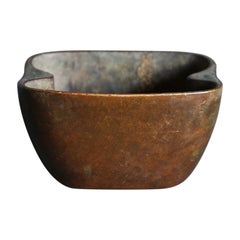 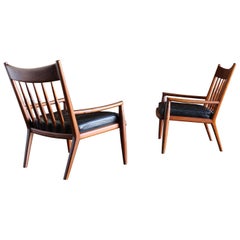 Edward Wormley Cabinet for Dunbar, circa 1960

H 17 in. W 12 in. D 8 in.
Stool by Espenet, signed and dated 1961
By Arthur Espenet Carpenter
Located in Maastricht, NL
Beautiful solid walnut Stool by US carpenter Arthur Espenet. The stool is signed “Espenet” and dated 1961. Wonderful organic lines and great patina.
Category

Stool by Espenet, signed and dated 1961

Carpenter furniture by Arthur Espenet are available for sale on 1stDibs. These distinctive objects are often made of wood and designed with extraordinary care. In our collection of Arthur Espenet Carpenter Furniture there are many options to choose from, although brown editions of this piece are particularly popular. Many of the original furniture by Arthur Espenet Carpenter were created in North America during the 20th century in the Mid-Century Modern style. If you are looking for additional options, many customers also consider furniture from Kai Pedersen Furniture, Wharton Esherick Furniture and Mt. Lebanon Shaker Community Furniture. Prices for Arthur Espenet Carpenter Furniture may vary depending upon size, time period and other attributes. The price for these items starts at $6,000 and tops out at $120,000, while pieces like these can sell for $46,900 on average.