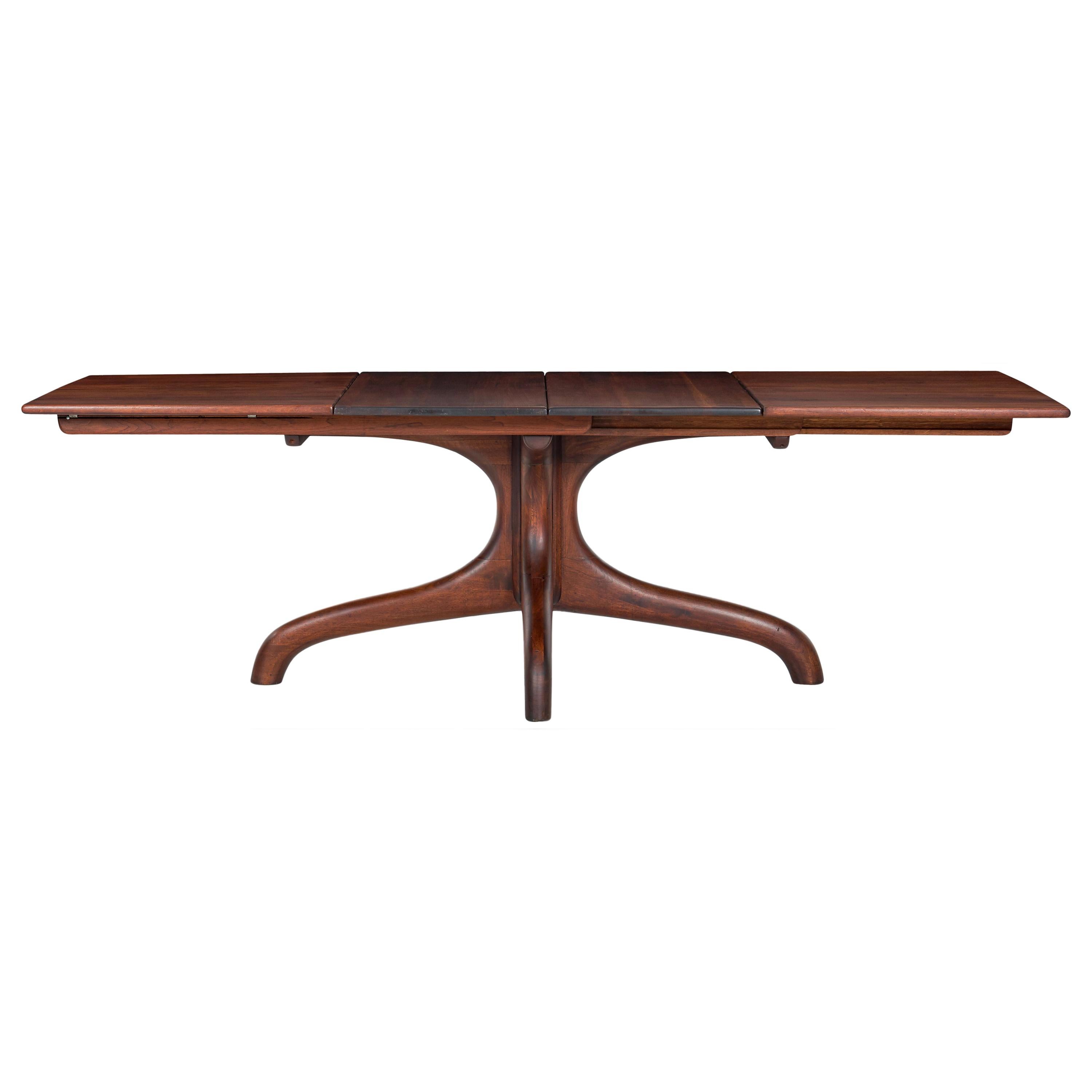 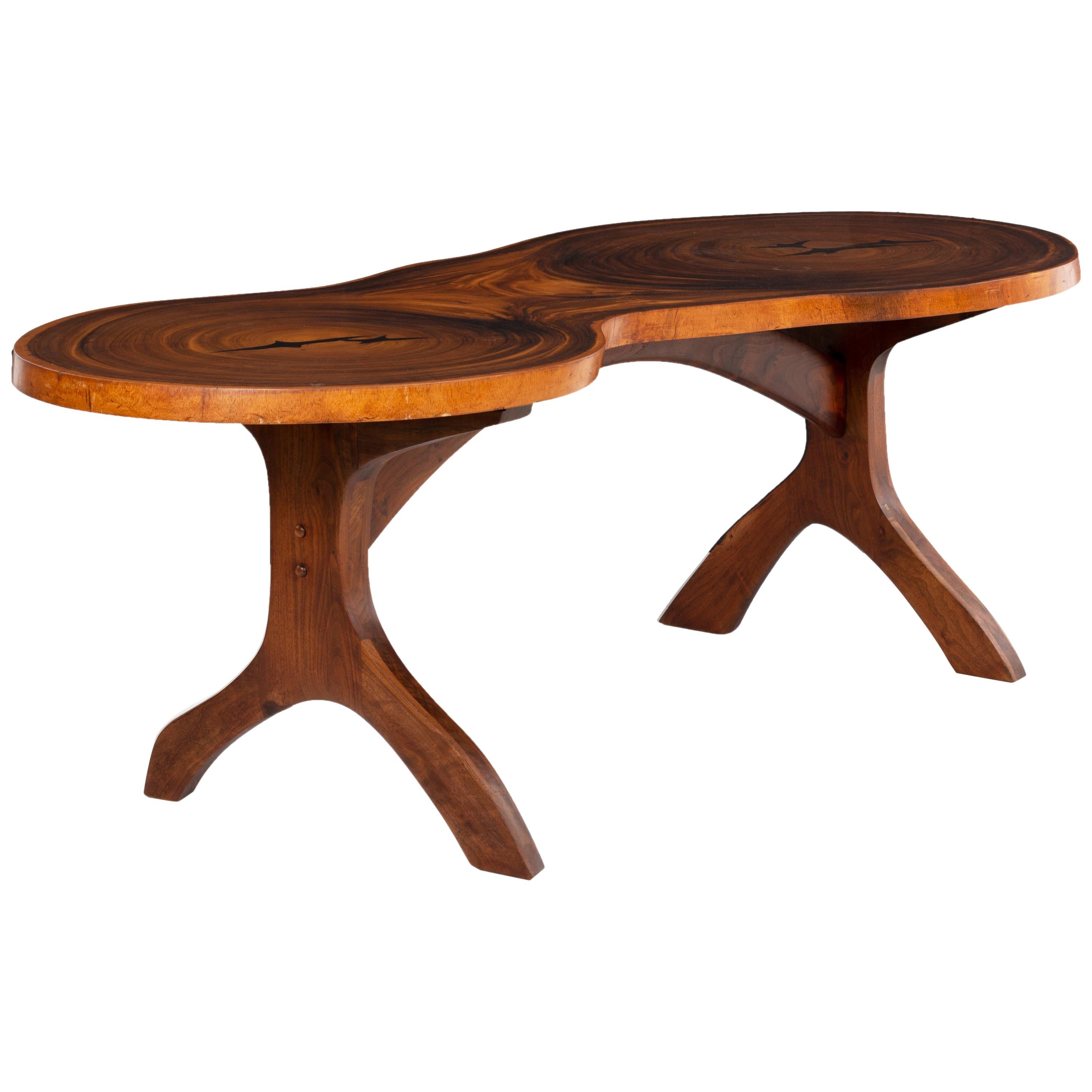 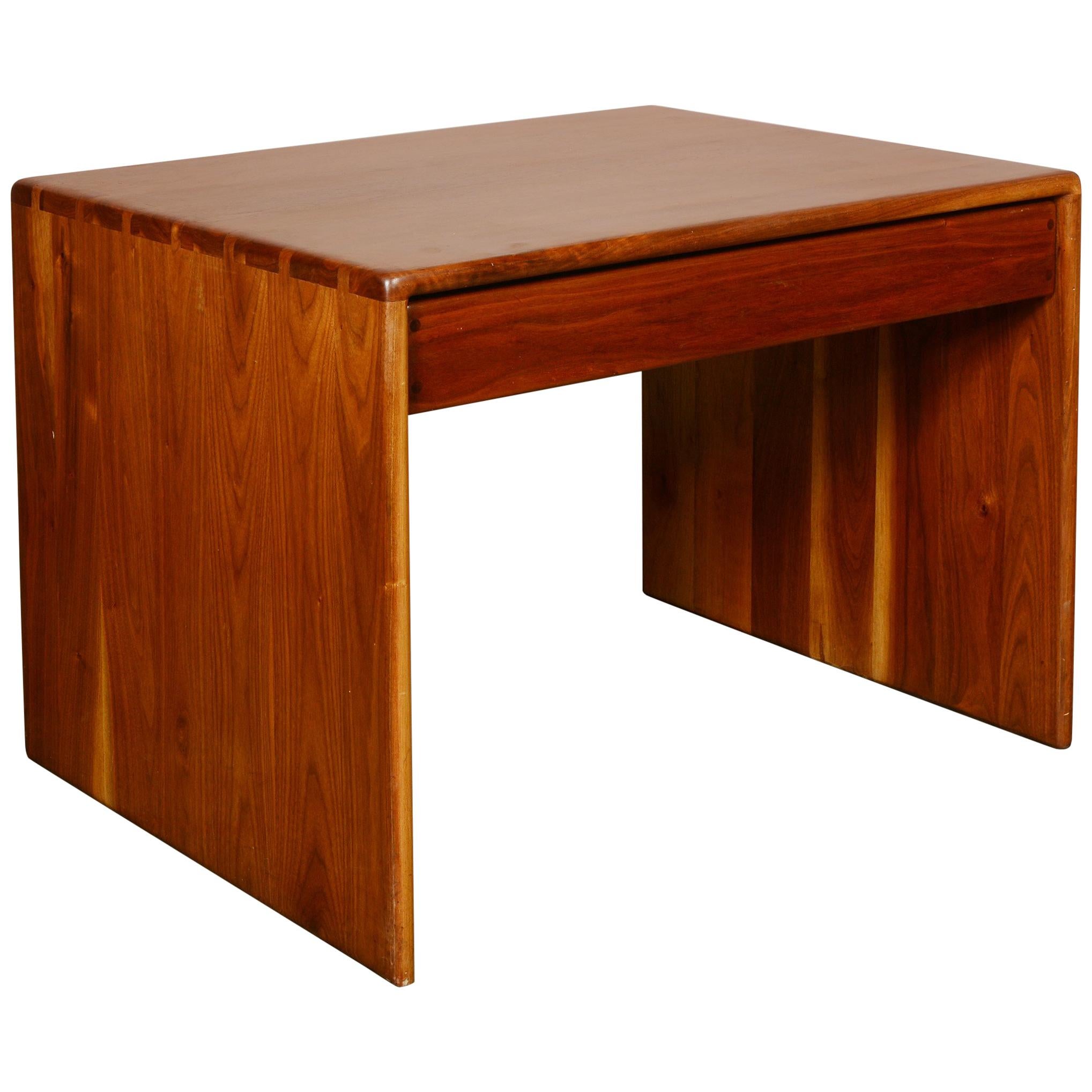 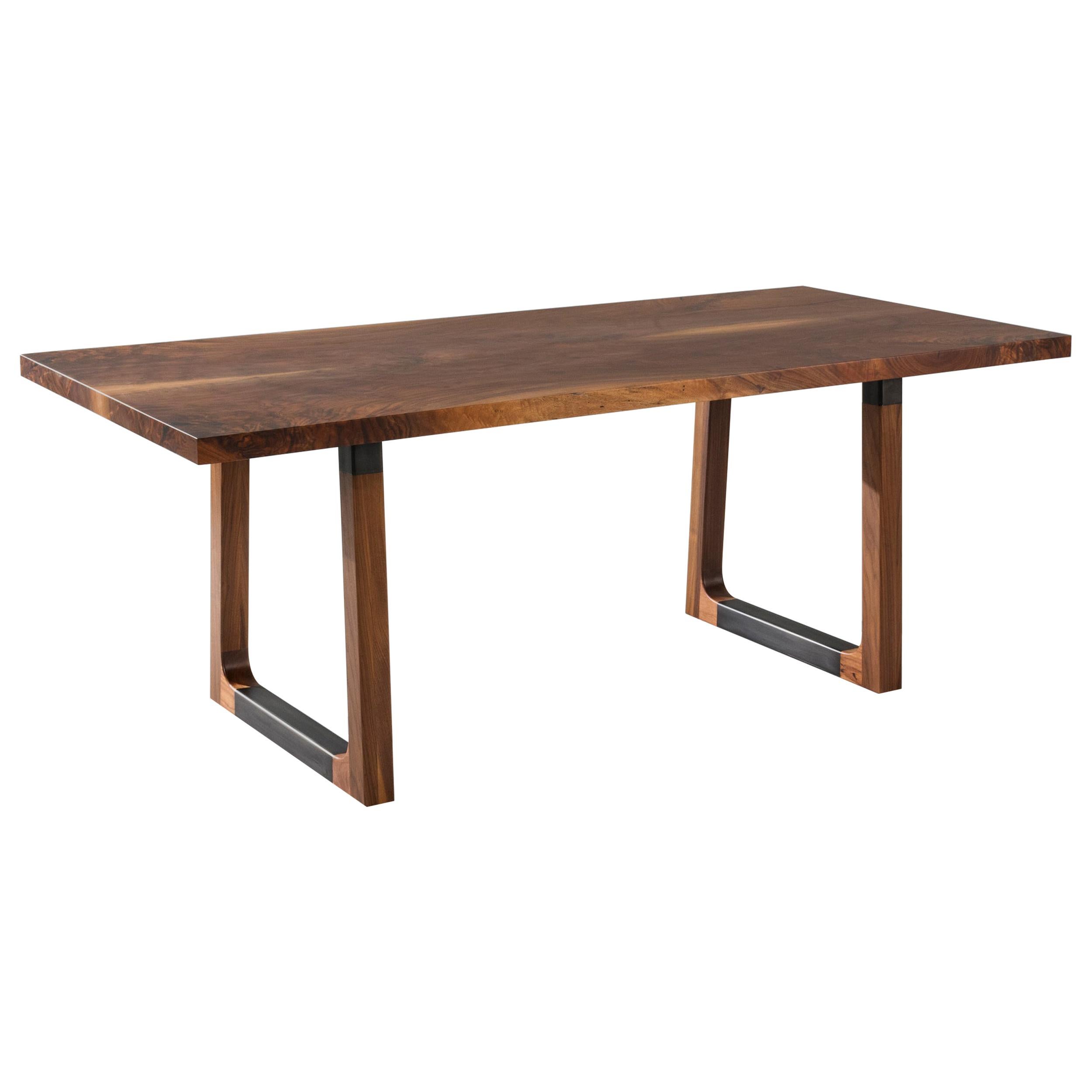 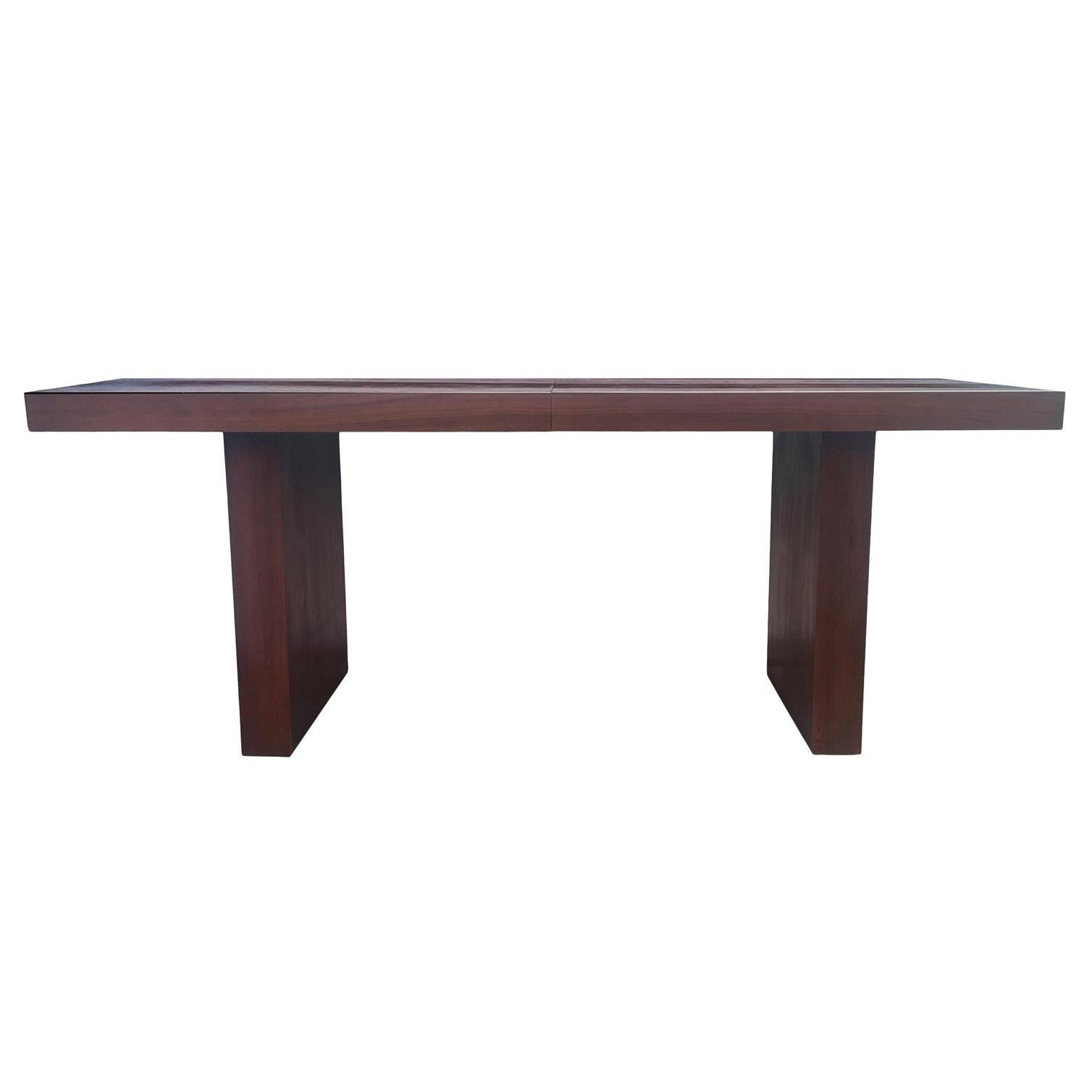 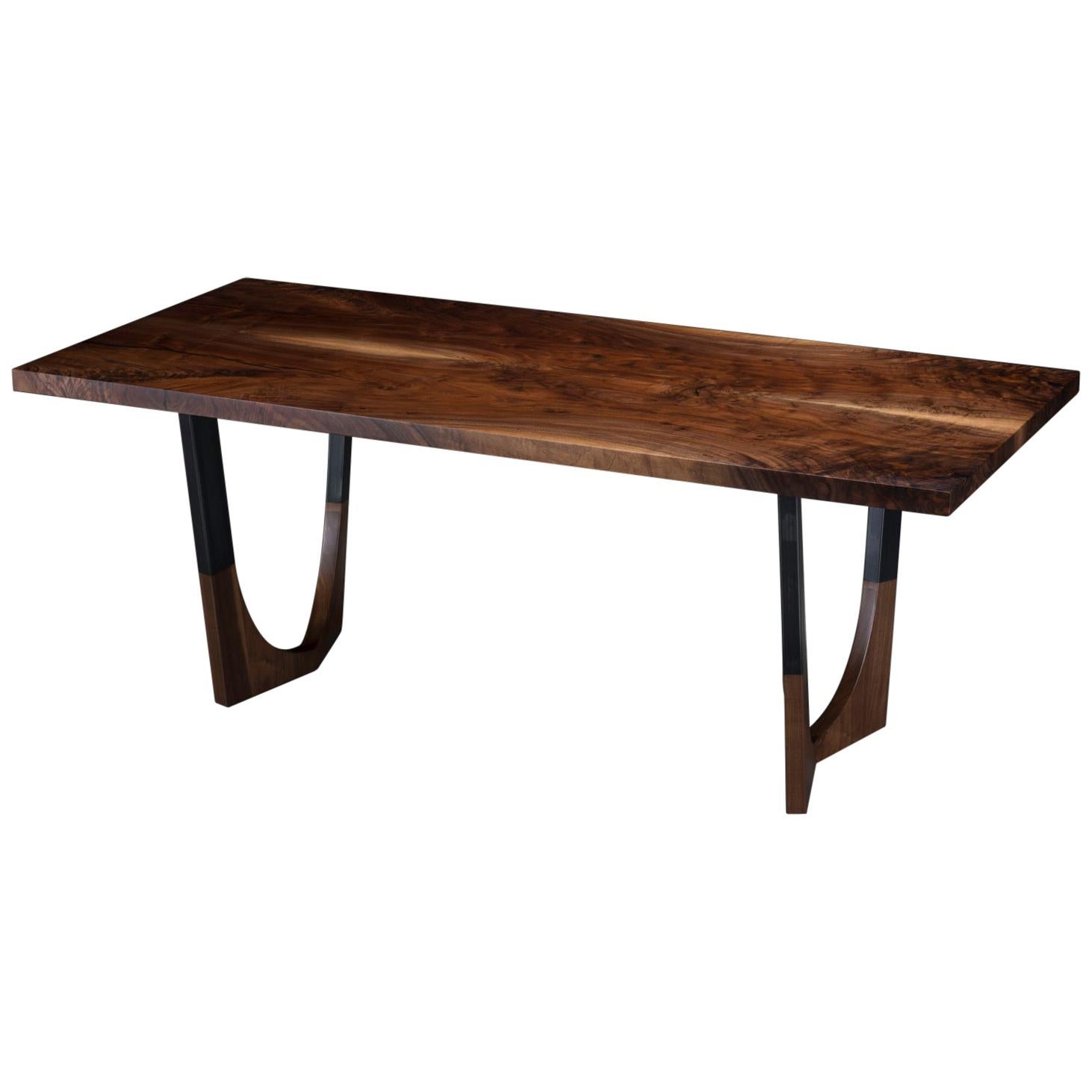 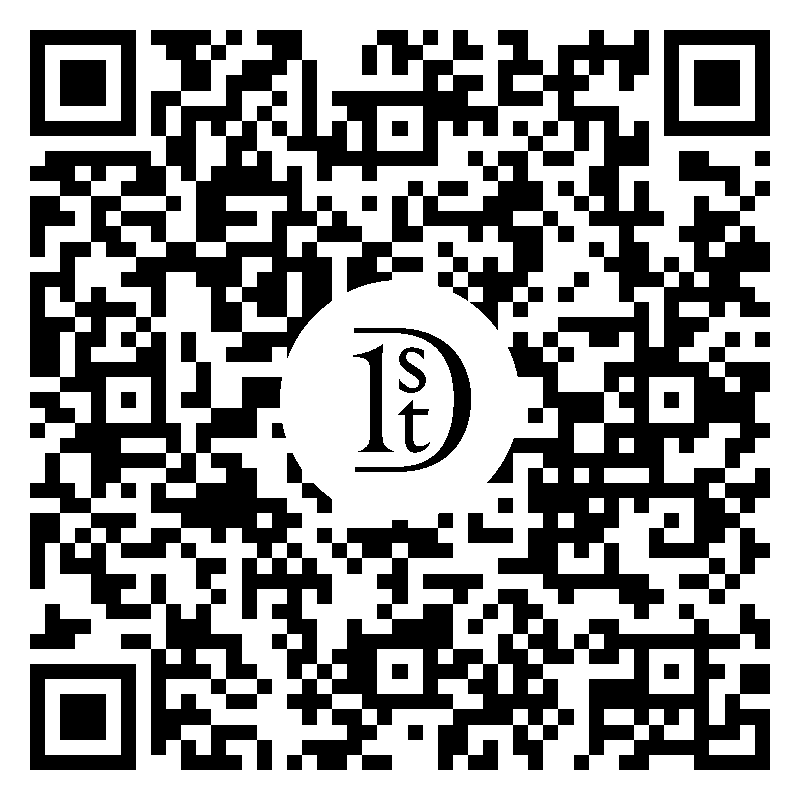 This exquisite dining table (or monumental center table) by Arthur Espenet Carpenter, signed by the artist underneath: 'Espenet 8706', dating this work to 1987, features a monumental solid Walnut with Rosewood inlay top over a red and black sculpted enameled steel base. A round glass center allows you to view the interior of the sculpture slash table base below. The solid walnut top is thick and substantial, and is balanced out with a gently sloped edge and exotic Rosewood inlay, giving comfort and sophistication to an otherwise eye-catching and stunning work of art. Newly polished in a thick and smooth French Polish, the most expensive and laborious finish due to its multiple hand-applied polish coats, which is soft to the touch and visually glasslike. One of my favorite attributes is the incredibly vivid and expressive wood grain throughout - providing a wild and impressive site to you and your guests while dining. The circular glass cutout in the top visually opens the view to the cylinder below. consider placing something in here such as a potted plant or flower, sculpture or lamp for illumination. Oh the possibilities. If you have a little dog put a pillow in the center and this might be their new favorite spot. Underneath the signed sculpture of a top is a heavy and thick black and red enameled steel base, sculpted with gentle curves and ribbon like cuts complements the simplicity of the round top. Both pieces are sculptures of their own - one in wood which is signed by the artist and one in enameled steel. It is an unusual and compelling incorporation of sculpted steel, rarely seen throughout Arthur Espenet Carpenter's extensive and seminal body of work. Arthur Espenet Carpenter, a self-taught woodworker in San Francisco, California was recognized as a master studio designer in the post-war American Studio Furniture Movement. Espenet worked alongside notable names such as Sam Maloof, Wendell Castle, and George Nakashima and was known for how he preferred creating unique pieces for individuals rather than creating commissions for commercial businesses. This approach has led his works to becoming highly sought after by collectors and art investors - and with his exotic yet classic style to interior designers and connoisseurs. This dining table, monumental center table, or conference / meeting table by Arthur Espenet Carpenter would work great in a Craftsman, Mid-Century Modern, Scandanavian Modern or Danish Modern home or penthouse apartment but could also look fantastic in a Space Age Mod, Post-Modern, Contemporary or Zen / Minimalism room. Also consider mixing it up in a Traditional, Transitional, Hollywood Regency, Classical or Art Deco room with a splash of juxtaposition. Would also be an apt choice in a commercial project such as a hotel lobby lounge or members club, creative design studio or high-rise executive office. ARTIST: Arthur Espenet Carpenter (American, 1920-2006) PROVENANCE: Acquired directly from Arthur Espenet Carpenter's Bolinas, California studio by the prior owner in 1987. MEASUREMENTS: H 28.5" x 67" Diameter Glass is 22.5" Diameter CONDITION: The walnut top was newly polished and is in exquisite condition, smooth to the touch and the polish helps to protect the top from daily use. The enameled steel base is in very good vintage condition with very light and very minor wear only noticeable on close inspection. Glass is in excellent condition with no chips or nicks. One very faint hairline and surface level scratch on the glass which can possibly be polished off. Beautiful, attractive and ready for immediate use. 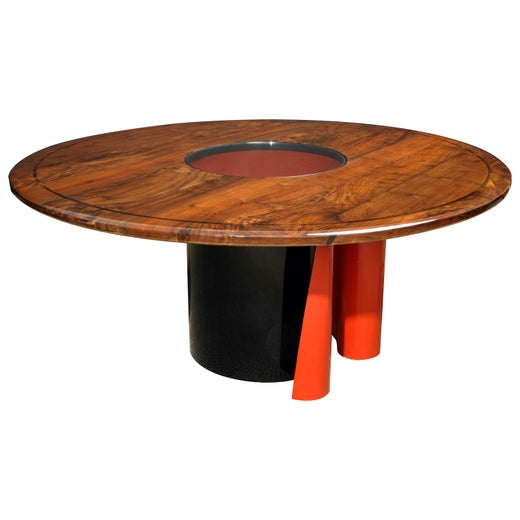 The San Francisco area woodworker Arthur Espenet Carpenter was one of the most celebrated figures in the postwar American Studio Furniture movement. Like George Nakashima, Sam Maloof, Wendell Castle and other craftsmen of the era, Carpenter built furniture both as a means of creative expression and for the simple personal fulfillment of making a thing well. The excellence of their work stood in high relief against the mass-produced goods made of synthetic materials that became prevalent in the mid-20th century.

Born in New York City during the Jazz Age, Carpenter earned a degree in economics from Dartmouth College and initially intended to become an accountant, like his father. But after serving four years in the United States Navy in the Pacific during World War II, Carpenter had a change of heart about entering the business world. Back in New York, he became an Asian-arts dealer but finally found a true sense of direction when visiting the “Good Design” shows held in that era at the Museum of Modern Art. Carpenter was particularly taken with the hand-turned wooden bowls by James Prestini and decided he wanted to make objects himself.

To get far from New York, he drove to San Francisco at age 28, bought a lathe and, with the help of a G.I. Bill small-business stipend, opened a woodworking shop in the Mission District. Carpenter started out making bowls, sold through local high-end retailers such as Geary’s. His skills improved, and within a few years Carpenter had moved to the coastal town of Bolinas, California, where he built furniture on commission. His national reputation was sealed when in 1972 — somewhat to Carpenter’s own surprise — his designs were shown by the Smithsonian American Art Museum’s Renwick Gallery in the exhibition “Woodworks,” alongside those of Nakashima, Maloof, Castle and the Philadelphia-area craftsman Wharton Esherick.

Carpenter defined a new design aesthetic now known as the “California roundover” — a style characterized by flowing lines and gently-contoured edges that make wood feel almost supple to the touch. The graceful and comfortable Wishbone chair, so named for the tapered supports that form its legs, is Carpenter’s signature design. The chairs, typically made of black walnut, are usually priced in the range of $20,000 a piece. Because of its simplicity and economy of materials, Carpenter’s furniture works well in any informal, unfussy decor — though it is particularly striking in a modern environment. As you will see on these pages, the work of Arthur Espenet Carpenter is both friendly and exquisite. The quality of its craftsmanship is impeccable, and it exudes the gentle warmth of the lovingly handmade object.

Recognized Seller
These prestigious sellers are industry leaders and represent the highest echelon for item quality and design.
Diamond Seller
These expertly vetted sellers are 1stDibs' most experienced sellers and are rated highest by our customers.
Established in 2012
1stDibs seller since 2015
1,797 sales on 1stDibs
Typical response time: 1 hour
Associations
20th Century Specialists
More From This Seller

$10,660 / item
Bookmatched Walnut Dining Table with Black Steel Legs "Lafayette Dining Table"
By Anton Maka
Located in Shelby Twp, MI
The Lafayette dining table is made of a book-matched claro walnut top with a blackened steel base with walnut inserts. This piece has been finished in an extremely durable matte conv...
Category

$12,350 / item
Walnut Expanding Dining Table with Black Steel Legs "Chalmers Dining Table"
By Anton Maka
Located in Shelby Twp, MI
The Chalmers dining table is made of a solid walnut top with custom handmade expanding hardware. The top is set on steel legs with a modern geometric design. This table has the versa...
Category

$8,900
Franklin Dining Table by Ambrozia, Walnut Slab, Blackened Steel & Walnut Base
By AMBROZIA
Located in Drummondville, Quebec
Our Frankin Live edge dining table is handmade to order from a one-of-kind walnut slab with an hand rubbed natural oil and wax finish that enhance the real beauty of the wood and giv...
Category