Though much of Arthur Umanoff’s furniture is marked by a no-frills simplicity common in American mid-century modern design, his work is anything but one-note. Over the course of a prolific career, Umanoff designed everything from case pieces to candleholders to dining chairs in iron, leather, walnut, wicker and more. With furnishings for a broad range of manufacturers throughout the ’50s, ’60s, ’70s and early ’80s, Umanoff continued a thread of sculptural elegance and textural sensitivity through his designs.

After graduating from Pratt Institute in the early 1950s, Umanoff experimented mostly with wood furniture before landing a job at Post Modern Ltd, a New York manufacturer of wrought-iron furniture. There he produced furnishings that married wrought iron with wood and plastic, creating functional pieces free of utilitarian bulkiness. Umanoff continued his experimentation with mixed materials through a partnership with Shaver Howard, for whom he designed wine racks in combinations of iron, leather and wicker.

When Shaver Howard bought Boyeur Scott, Umanoff conceived several furniture designs for the brand, including the 1964 Granada collection, whose curlicue iron bases, visible through glass tops, stand out as some of his most ornate and decorative work. Indeed, much of Umanoff’s oeuvre is far more simplistic, like iron-and-pine armchairs for The Elton Co. or low-backed, slatted-seat barstools with slender iron legs for Raymor.

Umanoff was fluent, too, in the more sumptuous modernism of the era: In the mid-1960s, he designed the 2405 and 4449 armchairs for Madison Furniture Industries. Popular in offices, the walnut-framed, leather-upholstered seats, which could have been mistaken for the seductive Scandinavian modern seating of the era, were reportedly the jumping-off point for Captain Kirk’s iconic seat on Star Trek.

Even as he is among the mid-century modern designers you may not know, with work across such a range of styles and manufacturers (most no longer in business), Umanoff, who died in 1985, leaves a legacy that is fascinatingly diverse and at times enticingly elusive, making his work intriguing objects for collectors.

Taverneau Serving Tray by Arthur Umanoff for Raymor
By Raymor, Arthur Umanoff
Located in Sagaponack, NY
A hand carved and finished serving tray made of Taverneau, an uncommon Haitian wood with a rattan wrapped handle. Designed and by Arthur Umanoff, produced by Raymor.
Category 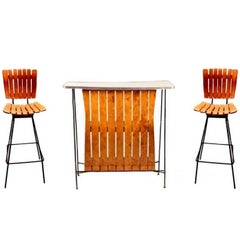 H 7.5 in. W 11 in. D 11 in.
Arthur Umanoff Desk and Chair
By Arthur Umanoff
Located in Los Angeles, CA
Arthur Umanoff desk and chair. Extremely elegant and timeless design made with an iron frame, walnut slats and rush accents giving it it's classic Umanoff look. One middle drawer and...
Category

H 29.88 in. W 3.07 in. D 0.69 in.
Hermes Bell
By Hermès
Located in Los Angeles, CA
Beautiful vintage Hermès equestrian bell. Hermès Paris and made in France stamped on outer rim. Beautiful accent piece to elevate any nightstand, desk or side table. Great piece of c...
Category

H 66 in. W 54.5 in. D 11 in.
Mid-Century Modern Leather and Iron Wine Rack by Arthur Umanoff
By Arthur Umanoff
Located in San Jose, CA
Vintage tall wine rack designed by Arthur Umanoff for Shaver Howard, circa 1950s. This piece is constructed of heavy cast black iron and tan leather saddle straps that hold up to 30 ...
Category