6 Mid-Century Modern Designers You May Not Know

This spring, Mad Men ended its spectacular seven-season run — and among the show’s many accomplishments was the frenzied interest it produced in all things mid-century modern. Suddenly, names like Bertoia, Eames, and Saarinen were no longer strictly the purview of design aficionados and vintage dealers. And even though we’ve said our goodbyes to Don, Betty, Roger and Joan, the mid-century fixation shows no sign of letting up. While many modernist heavyweights are finally getting their due, there are other incredible designers from the era who may have escaped your notice. Here are six designers whose names you should know and whose work you might be hankering for after saying goodbye to Don for good.

An architect and furniture designer, Adrian Pearsall often made custom, one-off pieces — which has presented a challenge to collectors attempting to catalogue his work. But a uniting aesthetic to his pieces was in fact driven by another passion: yachting. A stint in the US Navy as a young man engendered his lifelong love of boating and influenced his “Atomic Age” designs. For example, the long, low-slung gondola sofas he created would fit perfectly in the low-ceiling cabin of a boat. He also took the warm walnut found in traditional yacht interiors and refashioned it into his signature free-form, glass-topped tables.

Canadian-born Russell Spanner created boxy, geometric designs that were meant to appeal to a generation of postwar couples decorating their first homes. Hard, futuristic lines were juxtaposed against cartoon-like anthropomorphism, readily evidenced in the splayed legs and jaunty arms of Spanner’s chairs. Spanner was also a third-generation woodworker, which explains his innovative work with molded plywood and exquisite cuts.

At a time when modern was synonymous with severe and furniture was, well, a bit uncomfortable, Swedish designer Arne Norell created seats that welcomed sitters. Ease and comfort were core values of his work, and are reflected in his most famous piece, the “Ari Chair“. Combining wood with leather to produce safari-style seating that wasn’t stuffy, many of Norell’s designs were not produced until after their creator’s death in 1971.

Arthur Umanoff loved to mix materials: he often combined wrought iron with wood, leather, or rattan. Even though he made all sorts of items — from candlesticks to wine racks, bar stools to desks — there’s a strong visual cohesion amongst his pieces. Umanoff was particularly cognizant of how his pieces interacted within the family environment. A 1953 magazine wrote that: “Umanoff has tried in his work to substantiate the thesis that the fundamentals of good design are in every way analogous to good homemaking.”

One part tiki, two parts Danish modern, with a splash of deco: at first glance, Edmond Spence’s combinatory designs sound like a nightmare. In reality, the 1950s furniture designer fluidly melded influences from across decades and around the globe. Spence created undulating wooden facades on nightstands and dressers, more minimal pieces with slight concavities. In line with his globalized influences, Mexican and Swedish manufacturers produced Spence’s pieces. 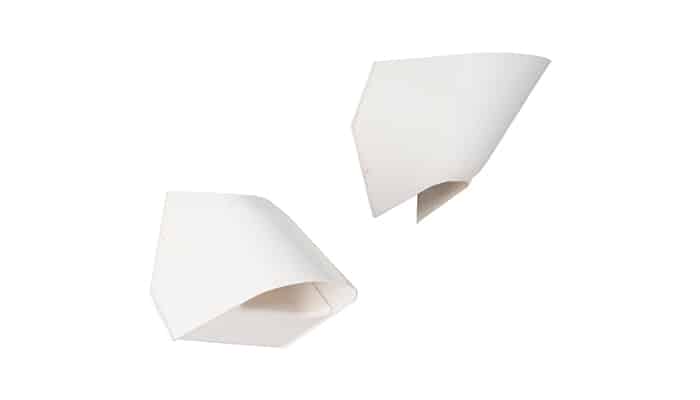 A pair of Lucetta plastic lamps designed by Cini Boeri for Stilnovo, 1973.

Founded in 1946 but disbanded by the end of the 1960s, Italian lighting firm Stilnovo created some of the most innovative and inspiring fixtures of the 20th-century during its short lifespan. In addition to producing pieces under its own label, Stilnovo worked with high-end designers like Gaetano Scolari, Alberto Fraser, and Ettore Sottsass to create inventive lighting for a mass-market audience. With wild forms and complicated finishes, these mid-century fixtures still appear quite cutting-edge today.