Audrey E. Gabrielson was an artist, poetess and sculptor who lived in San Francisco. She was born in Canada in 1932 and drew, colored, modeled in clay when very young. Gabrielson studied at Reed College, Portland, studying with famous West Coast artist, Louis Bunce. After retiring from a career as a Secretary for the San Francisco Superior Court, she dedicated herself to her art, focusing on oils, acrylics, watercolors and photography. In San Francisco, Gabrielson painted with artists Cucaro, Alexander E. Anderson and Raymond Howell. Initially, she worked in bronze, studying under San Francisco sculptor C.B. Johnson. Gabrielson's art was influenced and inspired by German Expressionists, Van Gogh, Lautrec, Picasso, Klimt, Schiele, Tamayo, Conners, Park and many more. Gabrielson had a passion for gems and minerals and was very involved with the San Francisco Gem and Mineral Society. She held season tickets for the San Francisco Ballet and Opera for many decades, in addition to regularly attending local and independent artist’s exhibitions and installations, touring bands and musicians, and other performances in and around San Francisco. Gabrielson passed away at her home in San Francisco's Bernal Heights neighborhood. 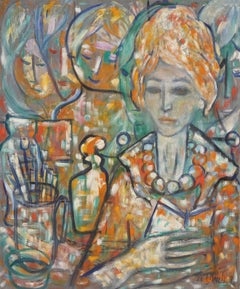 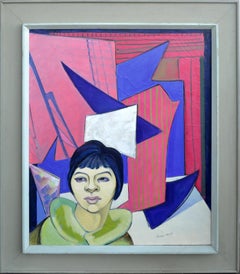 Portrait of a Man with a Bowtie
Located in Soquel, CA
Category

michael-pauker
Portrait of a Man with a Bowtie, circa 1970s