Louis Carl Bruno Héroux was a German painter from a Huguenot family and son of an engraver, Bruno Héroux, who follows the teachings of the Hochschule für Grafik und Buchkunst (HGB) in Leipzig, where he excels in xylography very quickly. From 1900–10, Héroux exhibited his paintings and engravings at the Salon of French Artists in Paris and obtained the Honorable Mention in 1906. His style, close to symbolism, evolved to the Jugendstil and was praised by an artist like Max Klinger. Héroux was soon at the center of the Leipzig School (Leipziger Künstlervereins) and some of his drawings were used to decorate buildings in Leipzig. He is the author of several hundred original engravings (some of which, erotic, are now very popular), and illustrated a large number of books. 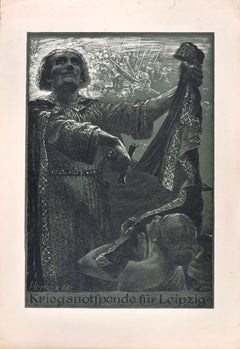 Simplicius Among Soldiers - Original Etching by M. Klinger - 1881
By Max Klinger
Located in Roma, IT
Category

Landslide - Original Etching and Aquatint by Max Klinger - 1881
By Max Klinger
Located in Roma, IT
Category

Fight Between Centaurs - Original Etching and Aquatint by Max Klinger - 1881
By Max Klinger
Located in Roma, IT
Category