Born to a prominent family in Philadelphia on January 24, 1885, George Biddle put his interest in art aside to accommodate his family's wishes and study law. He graduated from Harvard University in 1908 and Harvard Law in 1911, becoming a member of the Philadelphia bar. However, by the end of that same year, Biddle abandoned law and began studying art at the Académie Julian in Paris. Biddle continued his studies at the Pennsylvania Academy of Fine Arts during 1912 and 1913. He returned to Europe in 1914, studying in Munich and then in Madrid, where he studied printmaking. Biddle also spent the summers of 1915 and 1916 painting Impressionist works in France before he enlisted in the army in 1917. Following World War I, Biddle experimented in sculpture and graphics in Tahiti for two years and then in France between 1924–26. In 1927, Biddle returned to the United States settling in Croton-on-Hudson, New York. The following year, he traveled through Mexico on a sketching trip with Mexican muralist, Diego Rivera. During the Great Depression, Biddle actively sought government funding for the arts. His correspondence with President Franklin D. Roosevelt, who was a former classmate at Groton Preparatory School and Harvard, resulted in the establishment of the Federal Arts Project of the Works Progress Administration. The Depression fueled Biddle's desire to create socially conscious art. He established himself as a Social Realist through powerful murals depicting poverty. The Tenement, which he created in 1935 for the Department of Justice Building in Washington, D.C., was his first federally commissioned mural. The project led to controversy as people deemed his depiction of poverty to be inartistic. In addition to his artwork, Biddle authored several art books including An Artist at War and An American Artist's Story and he contributed regularly to national art magazines. In 1937, Biddle wrote the introduction for Boardman Robinson: Ninety-Three Drawings which was published by the Colorado Springs Fine Arts Center, where he taught in 1936 and 1937. In addition to teaching in Colorado, Biddle later taught at the Otis College of Art and Design in Los Angeles, the American Academy in Rome and Saugatuck, Michigan. He served as a chairman of the U.S. War Artists Committee during World War II and in 1950, President Truman appointed him to the Fine Arts Commission for which he served a 14-year term. Biddle died on November 6, 1973, in Croton-on-Hudson. 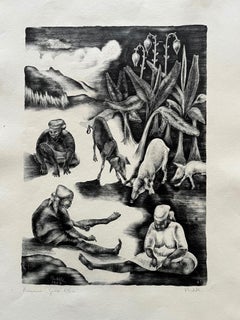 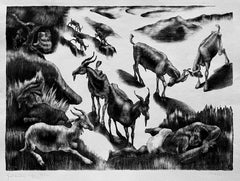 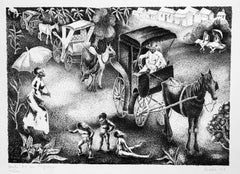 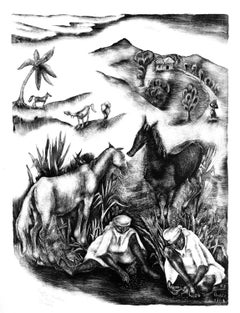 H 39.38 in. W 24.5 in. D .07 in.
HUNTING FOR VOLES
By Claudio D'Angelo
Located in Aventura, FL
Lithograph on paper. Hand signed, titled and numbered by the artist. Edition of 350. Artwork is in excellent condition. Certificate of Authenticity is included. All reasonable o...
Category

H 20 in. W 14 in.
"The Drive" - Figurative Golfing Landscape
By Douglas Adams
Located in Soquel, CA
20th century lithograph copy of an original painting by British artist Douglas Adams (English, 1853-1920). Signature in the print. Copy under the image reads: "London Published May 1...
Category

H 22.5 in. W 26.5 in. D 1.5 in.
Polley Pulque! (Mexican beer like beverage that is cactus based from WPA era)
By George Biddle
Located in New Orleans, LA
An original lithograph signed, titled and numbered in pencil. This impression is #28 out of an edition of 50. Mexicans have been brewing pulque from the juice of cactus-like maguey...
Category

George Biddle
Polley Pulque! (Mexican beer like beverage that is cactus based from WPA era), 1928

Find wide variety of authentic George Biddle art available for sale on 1stDibs. You can also browse art by George Biddle in lithograph and more by medium. Much of the original work by this artist or collective was created during the 20th Century and is mostly associated with the Modern style. Not every interior allows for large George Biddle art, so small editions measuring 14.25 inches across are available. Customers who are interested in this artist might also find the work of Charles Banks Wilson, Kenneth Hayes Miller and Louis Conrad Rosenberg. On 1stDibs, the price for these items starts at US$260 and tops out at US$1,960, while the average work can sell for US$350. ..