Leon Dolice, born in Vienna on August 14, 1892, even as a young boy, preferred the lure of painting to the scholastic studies which his early years had expected of him. His father was a machinist, which exposed the boy to welding and metal crafts. However, his interest in art led him to abandon a secure future in the family business, and he spent most of his late teens and early 20s traveling through the capital cities of Europe studying the works of the masters. As with many itinerant artists, he made his way in a variety of fashions metalworker, chef, designer somehow always managing to give vent to his creative instincts. Lured by the adventure of crossing the great Atlantic and by the freedoms of the New World, he came to America in 1920. There, he was greeted by the turbulence of New York in the Roaring 20s. Finding a retreat in the European Bohemianism of Greenwich Village, he picked the streets of this landmark neighborhood as his first subjects. With the encouragement of new-found friends and artists such as George Luks and Herb Roth, he soon ventured out and devoted all his time to chronicling the architecture, back streets, dock scenes and other nostalgia that was fast disappearing from the face of Manhattan, mainly in copperplate etchings. A favorite subject for him was the Third Avenue El near one of his New York City studios on Third Avenue. He won accolades for his work, and although he traveled the East Coast recording landmarks in other cities including Washington DC, Baltimore, Chicago and Philadelphia, he always returned to his new home Manhattan. A decline in popular favor for etchings led him to put aside his plates in the late 1930s and devote some 10 years to pastels, linocuts and painting. His subject matter was almost exclusively New York City street scenes, but figurative works, country scenes and even experiments with Abstract Expressionism at the height of its new-found favor in the 1940s punctuated his career. In 1953, after learning of the forthcoming demise of the Third Avenue El, in the shadow of which he had maintained his studio for over a decade, he once again took to his plates and press and created a final series of Third Avenue and or other New York City landmarks that were then threatened with extinction. His work brings to light aspects of nostalgic New York that survives today only in small part, whether in architecture or spirit. Dolce's works are in several notable museums and private collections, including the Museum of the City of New York; the Print Collection of The New York Public Library; The New-York Historical Society; the Georgetown University Library; The Philadelphia Print Club and others. In the past few years, his work has been exhibited at Hofstra University Museum of Art, Long Island, New York; with the Montauk Artists' Association, Montauk, New York and at the Tribeca Gallery, New York City. An exhibition of his works on paper was held from February 28 to March 14, 2003, at the Belleclaire Hotel at 250 West 77th Street and Broadway in New York City. Featuring historic street and landmark scenes of New York City created from 1920 through 1952, it was held as a tribute to New York, which had been sharply in the world's focus following the events of the previous six months. 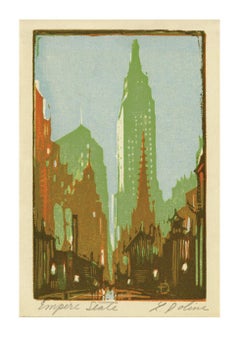 Manhattan Skyline
By Leon Dolice
Located in Sheffield, MA
Leon Dolice American, 1892-1960 Manhattan Skyline Pastel on paper 19 by 12 in. W/frame 25 by 18 in. Signed lower right The romantic backdrop of Vienna at the turn of the century h...
Category

Manhattan Skyline
By Leon Dolice
Located in Sheffield, MA
Leon Dolice American, 1892-1960 Manhattan Skyline Pastel on paper 19 by 12 in. W/frame 25 by 18 in. Signed lower right The romantic backdrop of Vienna at the turn of the century h...
Category

East Side
By Leon Dolice
Located in Myrtle Beach, SC
'East Side', color linocut, no edition—proofs only, c. 1937. Signed and titled in pencil. A fine impression, on cream, wove card stock, with margins (3/16 to 7/16 inch), in excellent...
Category 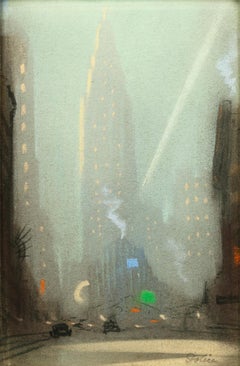 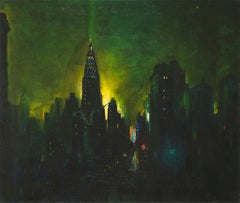 Winter on the Farm
By Dale Nichols
Located in New York, NY
Category

Dale Nichols
Winter on the Farm

H 29 in. W 41 in. D 2 in.
“View of Manhattan”
By Leon Dolice
Located in Southampton, NY
Oil on board painting by the American artist, Leon Dolice. Signed lower left. Condition is excellent. View of Manhattan with the Empire State building in the distant. East River in t...
Category

H 20 in. W 16 in. D .25 in.
"Flatiron Building, New York"
By Leon Dolice
Located in Southampton, NY
Built in 1902 and designed by Daniel H. Burnham, the Flatiron Building is considered the oldest and possibly, one of the most famous skyscrapers in New York City. Instantly recogniza...
Category