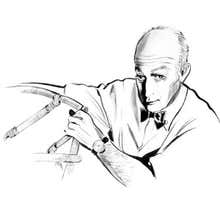 Frankl's Skyscraper cabinets, bookcases and more — introduced in 1924 — are his earliest and best-known designs (and the work by which he is most often represented in institutions, such as New York’s Metropolitan Museum of Art). Tall and narrow, the pieces have staggered shelves meant to mimic the setbacks of Manhattan office towers. A later visually expressive line — the Speed chairs and sofas, which have a raked profile suggesting motion — links Frankl to Donald Deskey, Raymond Loewy and other creators of Streamline Moderne design.

Frankl moved to Los Angeles in 1934 and luxuriated in the climate and lifestyle. His designs became lighter and simpler and found an audience among the Hollywood élite. (Katharine Hepburn, Cary Grant and Fred Astaire were clients.) Fascinated by Asian arts, Frankl produced numerous pieces — tabletops with edges that curve upward; sofas, chairs and other seating with rattan frames — inspired by Chinese and Japanese forms and materials. In the 1940s, Frankl became one of the first designers to incorporate free-form, biomorphic shapes in his work, as well as novel upholstery fabrics such as denim and nubby wool.

Paul Frankl Two-Tiered Table by Brown-Saltman
By Paul Frankl, Brown Jordan
Located in Highland, IN
This elegant design by Paul Frankl for Brown-Saltman has many uses. The three gracefully curved and tapered legs support a pair of round tops and the form, shape and scale allow it t...
Category

Mid Century Paul Frankl Custom Side Table
By Paul Frankl
Located in Los Angeles, CA
Custom designed side table by Paul Frankl commissioned for a home in Mendocino, California circa 1950. Original wood finish is in excellent condition and has been french polished.
Category

Black Lacquered, Chrome and Silver Leaf Extension Dining Table by Paul Frankl
By Paul Frankl
Located in Hollywood, FL
The black lacquer top with two leaves above a fluted oval pedestal with cream lacquer and silver gilt above a polished nickel base extends with two 14" leaves to 99" fully extended,...
Category

Paul Frankl Two-Tier Side Table for Brown Saltman
By Paul Frankl
Located in Los Angeles, CA
Paul Frankl two-tiered occasional table by Brown Saltman of California, circa 1950. Solidly crafted and elegantly designed. Signed and marked. We have not refinished or restore...
Category

The Paul Frankl tables are available for sale on 1stDibs. These distinctive objects are often made of wood and designed with extraordinary care. There are many options in our Paul Frankl table collection, although brown editions of this piece are particularly popular. There are currently 111 vintage editions of these items in stock, while there is also 0 modern edition to choose from. Many of Paul Frankl's original tables were created in Mid-Century Modern style in North America during the 20th century. Many customers also consider tables by Charles Hollis Jones and Warren Platner, Widdicomb Furniture Co. Prices for Paul Frankl tables can vary depending on size, time period and other attributes. Price for these items starts at US$316 and tops out at US$176,000, while pieces like these can sell for US$6,233 on average.