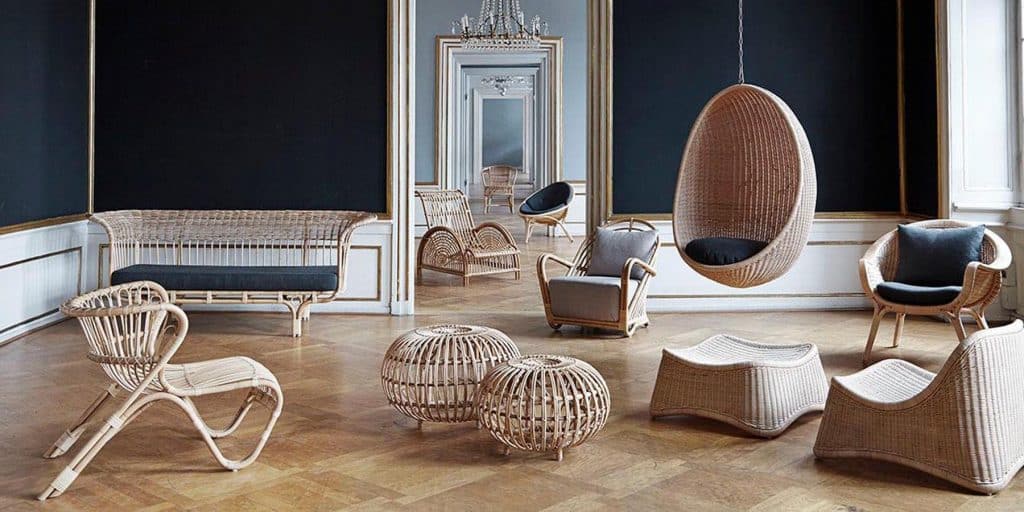 November 8, 2020Few things inspire such extreme devotion as furnishings crafted from the versatile fibers of a tropical palm native to Indonesia, Malaysia and the Philippines. “Rattan is in my bones,” says Celerie Kemble, the celebrated New York– and Palm Beach–based interior designer. “I don’t have cartilage. I have rattan joinery.”

Glancing around her Manhattan living room, Kemble ticks off the rattan pieces she sees: “I’ve got old Japanese rattan coffee tables, a set of French bistro chairs and tables with dyed whipping, a nineteen sixties or seventies bookcase of rattan and glass, a Victorian wicker plant stand — and I haven’t even turned my head.”

Kemble’s rattan obsession translates to her work, where appropriate. When designing the Playa Grande Beach Club, in the Dominican Republic, for instance, she filled the boutique hotel, with “all the vintage rattan and wicker I could find.”

To clarify, rattan is not bamboo, which is a rigid, hollow reed. Stalks of rattan (whose name derives from the Malay rotan) are dense, steamable and bendable, which is why it lends itself to curvaceous designs and infinite creative uses in a way bamboo does not.

Nor is rattan synonymous with wicker, which is a broader term for woven items — often made of rattan fibers but also of willow, other pliable reeds or even synthetic materials.

The use of rattan stretches from prehistory to IKEA. Its popularity is likely to swell with Rizzoli’s publication this fall of the first comprehensive book on the subject in decades, Rattan: A World of Elegance and Charm, by Lulu Lytle, a leading light of the British home-furnishings industry, with a foreword by Mitchell Owens, decorative arts editor of Architectural Digest.

In 1997, Lytle cofounded the London-based company now known as Soane Britain to make furniture with the quality and longevity of fine antiques. She has been smitten with vintage rattan since adolescence, when she trawled antiques shops, house sales and street markets, “cluttering up my long-suffering parents’ house and stables with old daybeds, chairs, tables and baskets,” she writes in the book’s introduction.

Lytle sketches the material’s history in decorative arts, from its earliest usage, by Asian artisans, through the 18th and 19th centuries, when European colonists encountered it in Southeast Asia and India and were captivated by its practicality and attractiveness, to its widespread modern-day acceptance and worldwide mass production.

The book is a triumph of photographic research, containing almost 300 photos revealing rattan in settings as diverse as Impressionist paintings, flamboyant nightclubs, sidewalk cafés and even early airplane interiors. There are curlicued Victorian chairs and pieces by the giants of modernism, including Josef Hoffmann for Thonet, Josef Frank for Svenskt Tenn, Jean-Michel Frank for Ecart, Paul Frankl and Donald Deskey.

Among the evocative 20th-century images Lytle has unearthed are a delivery cart piled high with armchairs from the Wakefield (later Heywood-Wakefield) company of Massachusetts and a group of dowagers in the palm- and rattan-filled lobby of a 1920s Cairo hotel, attended by dour men in fezzes.

She has also uncovered a number of photos of glamorous interiors, including the Paris winter garden of Madeleine Castaing, one of the past century’s most renowned antiques dealers; the San Francisco home of the late decorator Michael Taylor, a lifelong devotee of rattan; and the theatrical Billy Baldwin–designed New York beauty salon of Mr. Kenneth, seen in 1963 with a phalanx of leopard-print-upholstered rattan chairs under a tented ceiling.

Interior designer Amanda Lindroth is a rattan aficionado with offices in Palm Beach, Charleston and Nassau, the Bahamas. Like Kemble, she grew up in Florida, where rattan furnishings are ubiquitous, and she recently launched her own line of rattan furnishings and tabletop wares.

“Furniture made out of woven materials has occurred since the beginning of time and in every culture,” Lindroth says, noting that in earlier times, rattan furnishings were most often found in semi-outdoor settings like sunrooms and porches.

They were welcomed indoors in the mid-20th century, a development for which Lindroth cites the influence of Italian architect and set designer Renzo Mongiardino, a key figure in challenging the idea that rattan was suited only to subtropical climates. Mongiardino masterfully integrated rattan pieces into over-the-top neoclassical settings and designed dozens of classic chairs and tables for Bonacina, an Italian company that has been weaving furniture of rattan since 1889 in the Brianza region north of Milan.

“Mongiardino paired rattan with fluffy upholstered sofas and put wicker chairs in Rome apartments with very formal interiors,” Lindroth says. “He was the most important decorator who brought wicker into the house. His intention was to bring leisure and relaxation indoors and take some of the formality out.”

Once one decides to investigate rattan furnishings, there is no shortage of search terms to play with. A few suggestions: Bielecky Brothers, New York–based makers of handcrafted rattan furniture since 1903; Milanese artist-designer Gabriella Crespi, who blended rattan with brass in sexy, sculptural pieces during the 1970s; and peacock chair, a catchall term for the numberless iterations of the beloved high-backed seat, many intriguing examples of which can always be found on 1stDibs.

One name that crops up frequently in the inventory of 1stDibs dealer Erin Lane Estate, an antiques warehouse in West Oakland, California, is McGuire, says Carlos Bichara, business partner and husband of Erin Lane. “Elinor and John McGuire produced rattan furniture in San Francisco starting in the forties, part of the indoor-outdoor California organic, modern lifestyle,” Bichara explains. “McGuire is known for pieces lashed together with leather rawhide. It’s so in demand among the designers we work with.”

Another prominent player is Sika Design, a Danish company founded in 1942 that has been instrumental in keeping alive lesser-known designs in natural rattan by 20th-century luminaries of modernism like Nanna Ditzel, Arne Jacobsen and Franco Albini. Sika’s manufacturing facility in Indonesia also produces well-priced woven bistro chairs, stools and other utilitarian pieces, all found on 1stDibs.

And don’t overlook the unusual Knotties — minimalist sculptural loveseats, armchairs and ottomans for use indoors and out — designed by contemporary architect Nina Edwards Anker, of Brooklyn-based Nea Studio, and available on 1stDibs. They’re made of polyethylene rattan, a modern synthetic material that is a dead ringer for the natural product but entirely impervious to the elements.

Lightweight, durable and versatile, rattan is whatever one wants it to be: elegant or rustic, chic or workaday. “Rattan can feel like a whimsical gesture, fun or even kooky,” says Kemble. “But it’s also such an inherently practical material, and the need for it hasn’t changed over the centuries.” 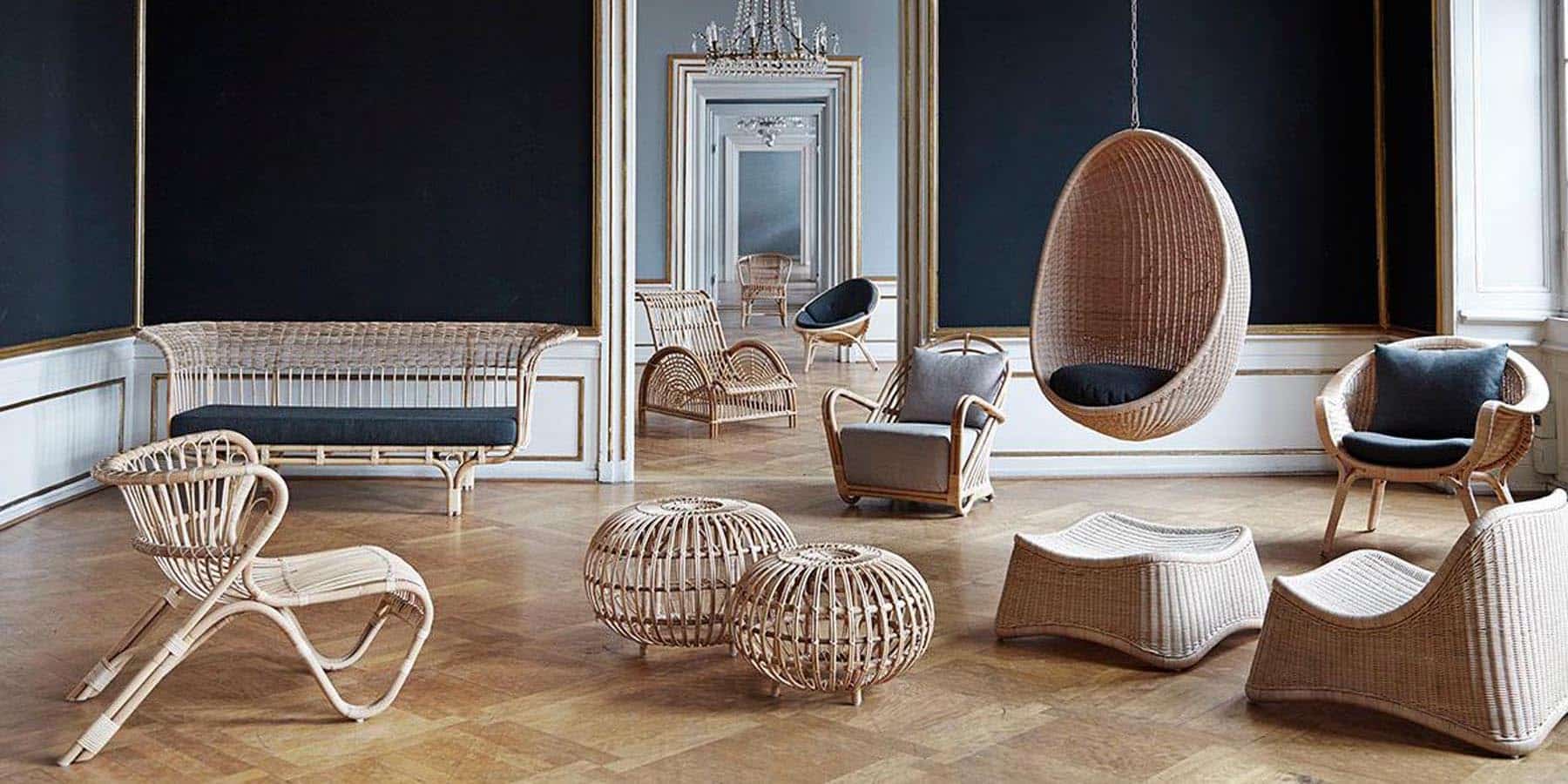 Explore Rattan on 1stDibs
Shop All